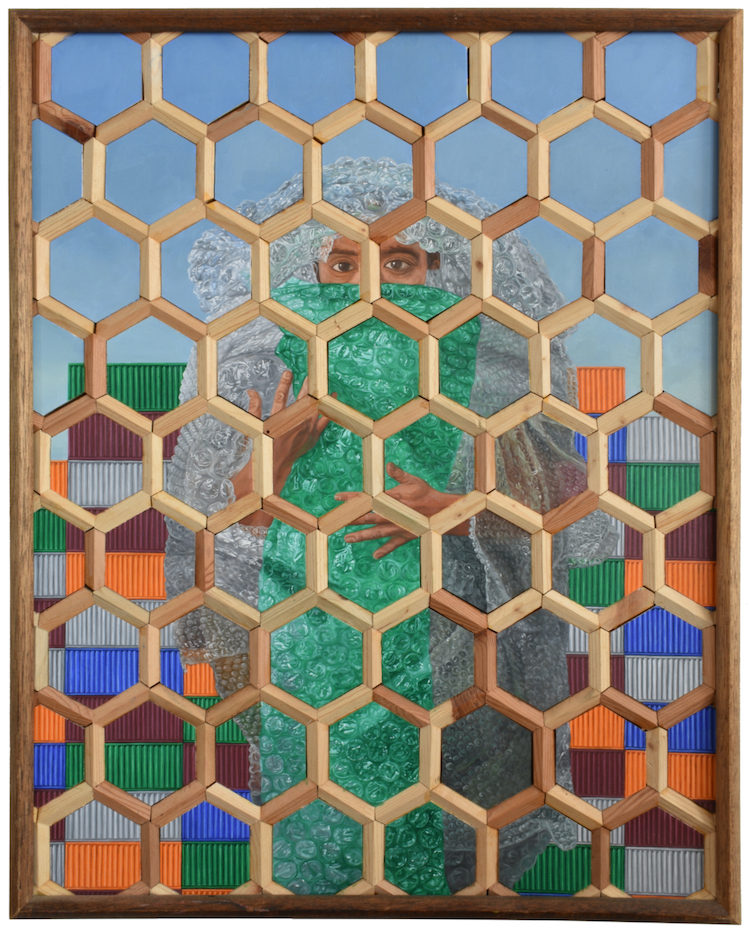 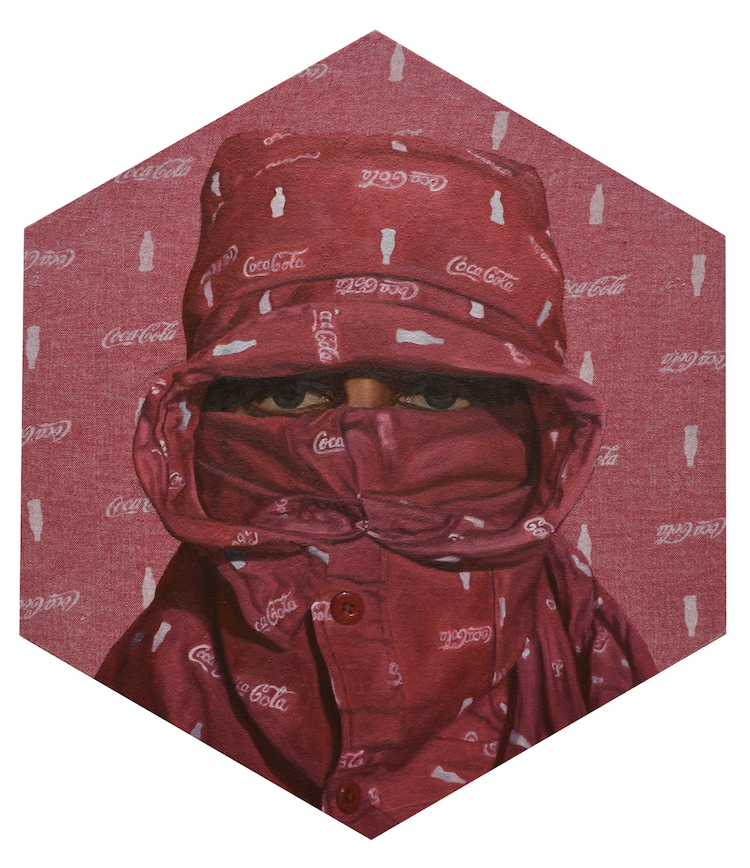 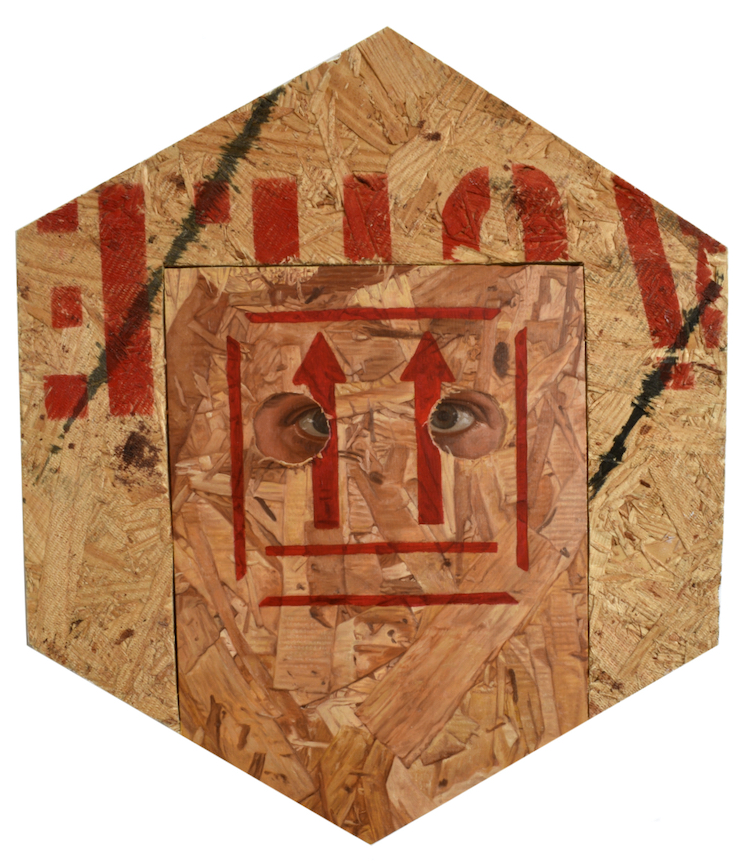 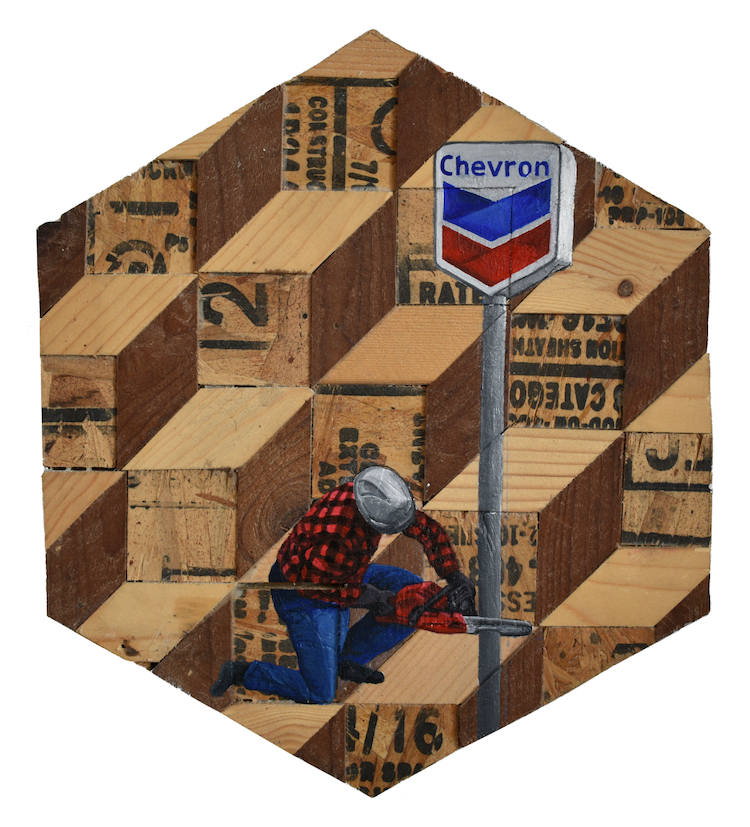 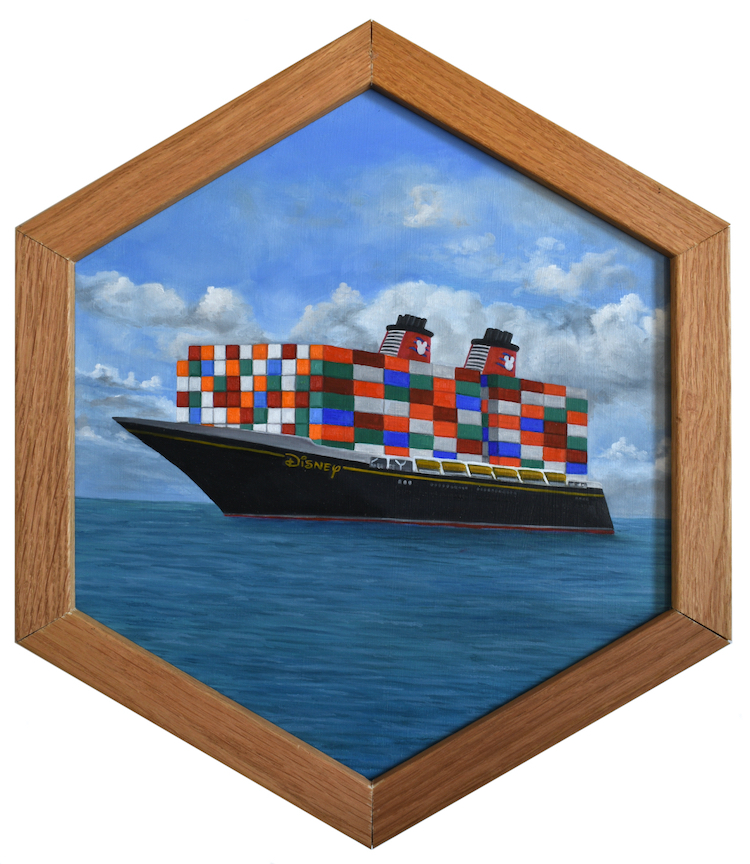 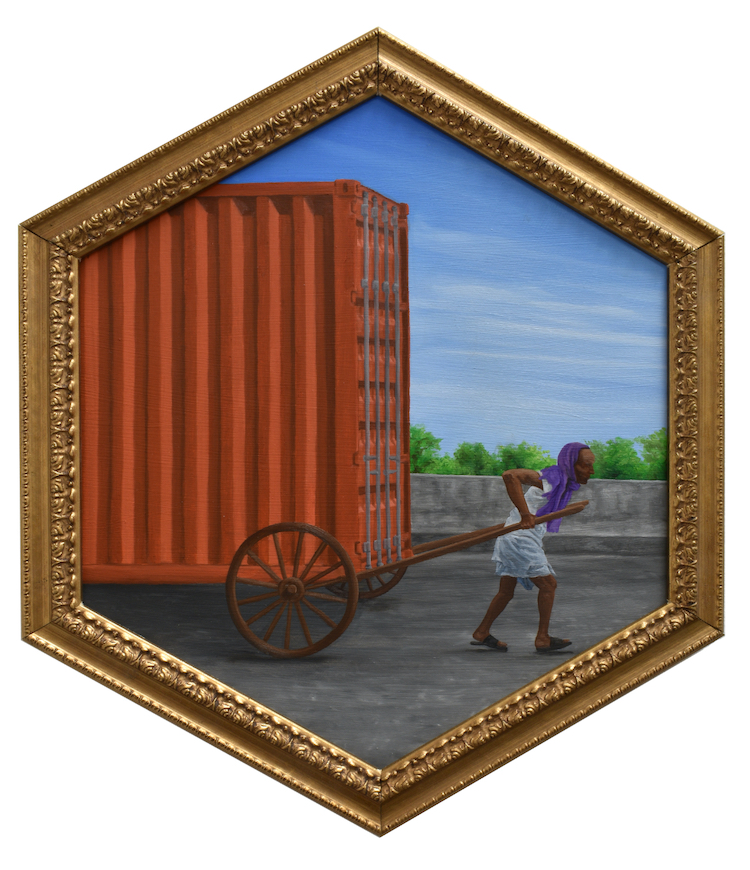 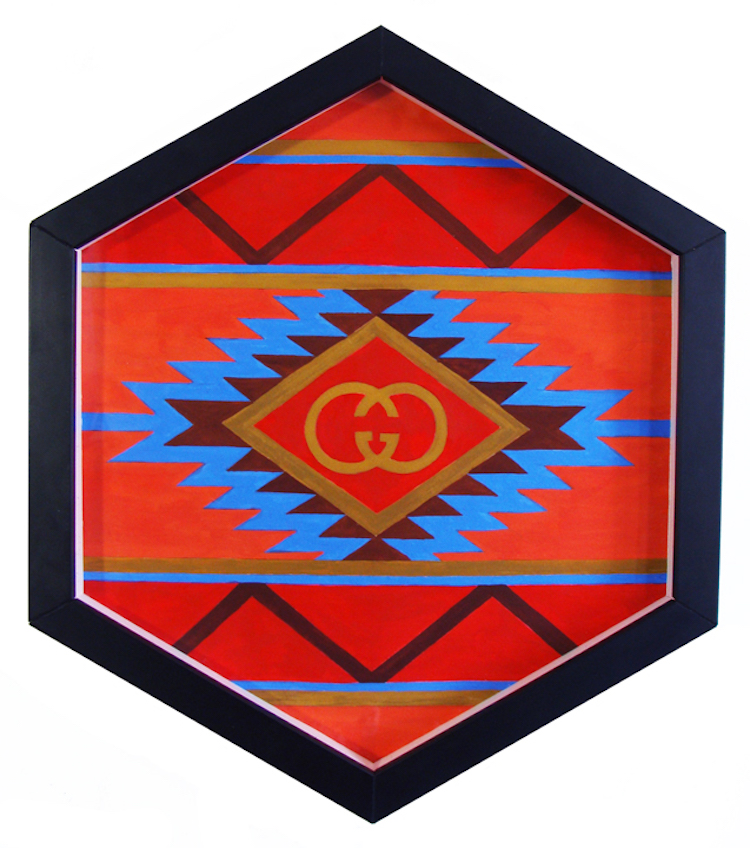 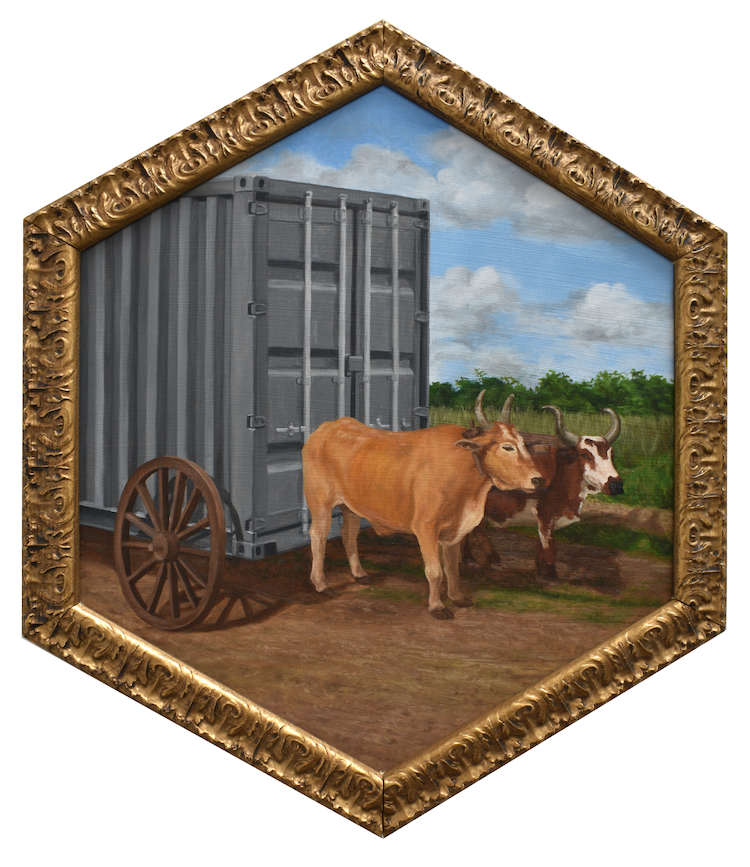 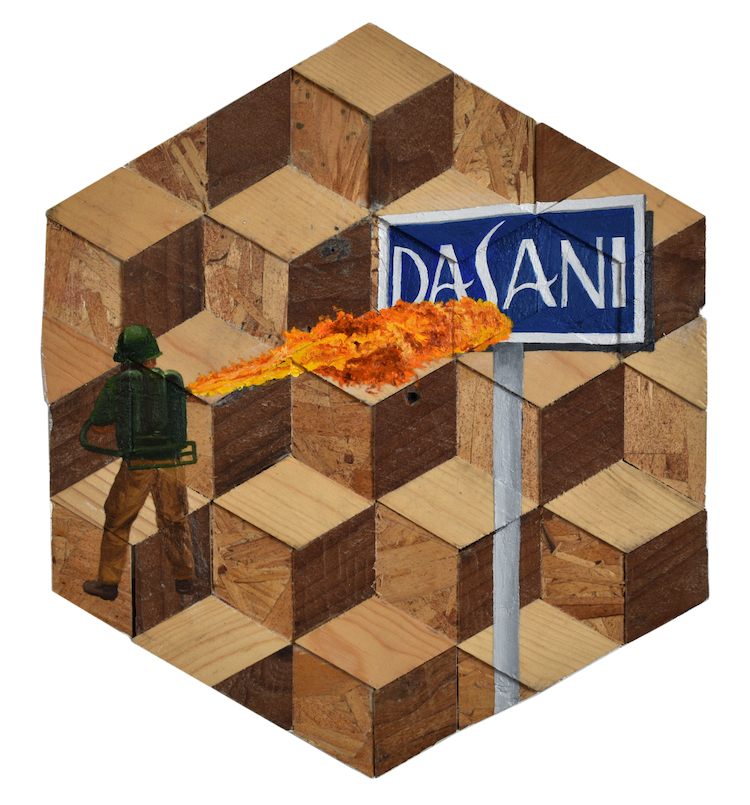 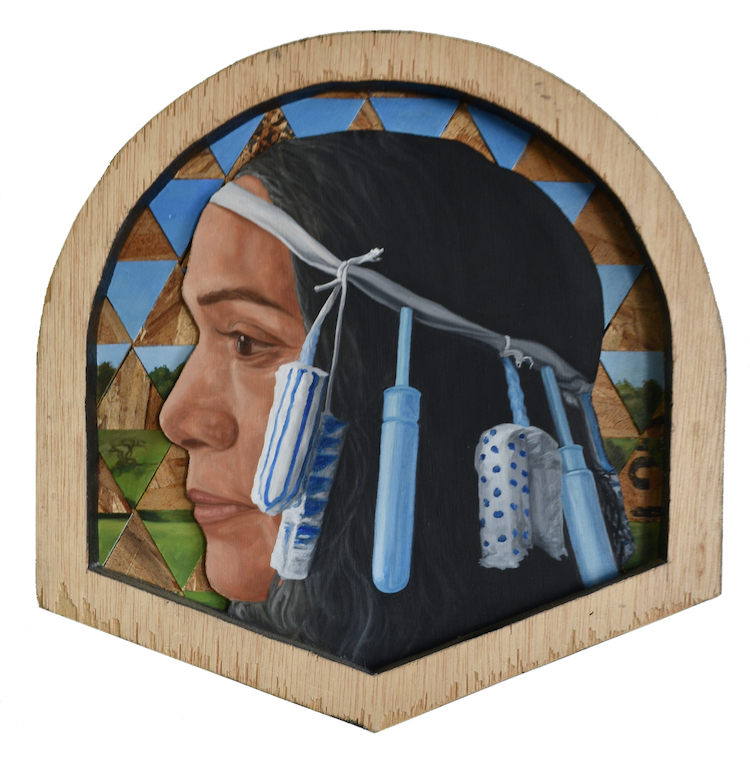 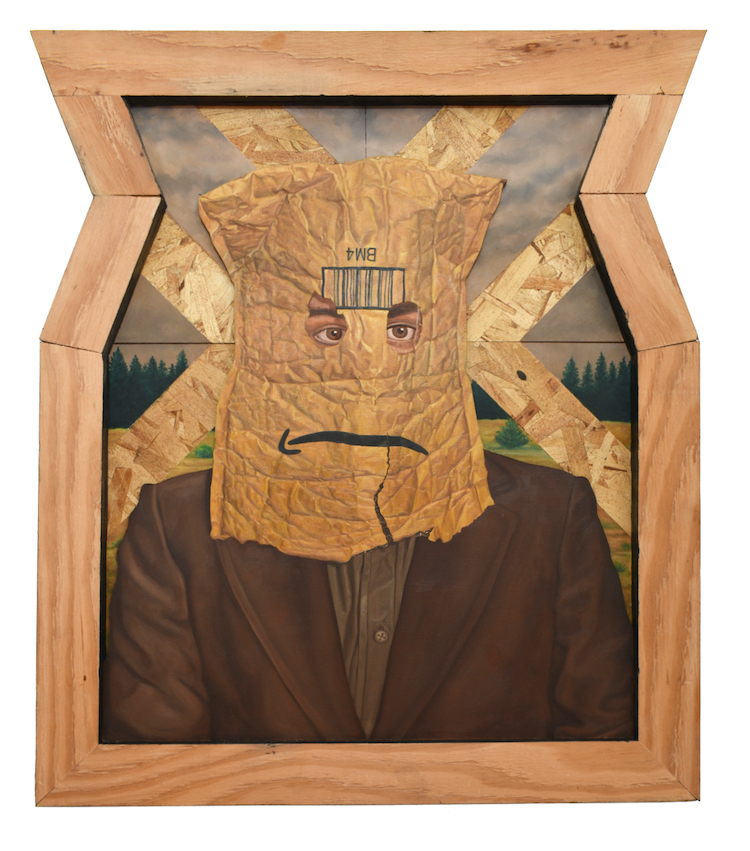 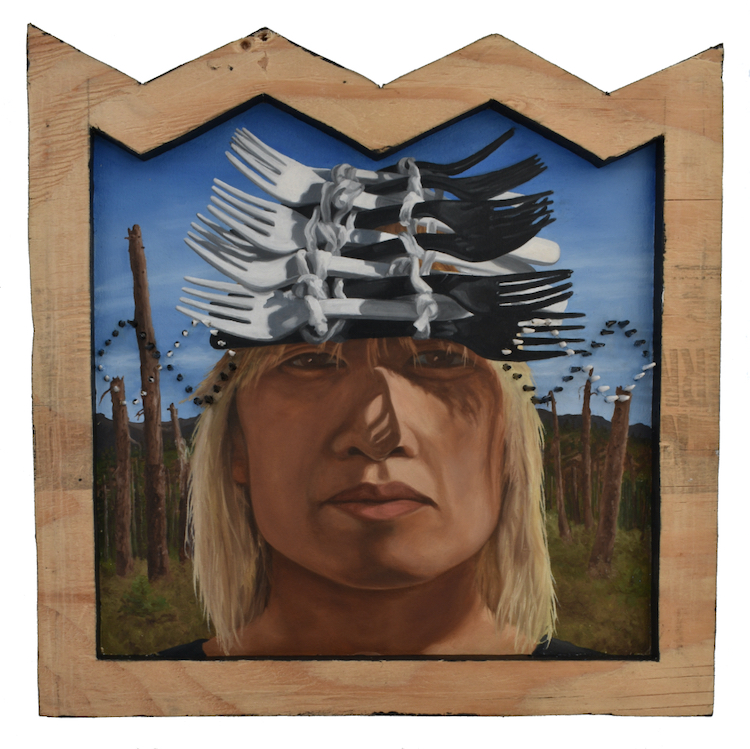 Artits have confronted our environmental impacts for years. There is Zaria Forman's research and documentation, or Mary Iverson's metaphorical paintings, to name a few. Oakland-based painter Peter Adamyan has a new angle in First World Cargo Cult, about to be on view at Spoke Art via appointment only. Taking a large scope overview on the impacts of mass production through the lens of "colonialism, indigenous spirituality, and environmental decay," Adamyan captures a collective mood of destructive consumption. As we argue over politics or even localized issues, Adamyan has created a body of work that speaks to global and historical conversations, with clever irony in each work. Read his statement below:

"The first version of what would later regrettably be called a ‘cargo cult’ arose in Melanesia, which includes islands like Papua New Guinea and Fiji. When colonists arrived on the islands they brought mass produced goods along with them... These generally egalitarian, hunter-gatherer, lightly agricultural societies had their way of life disrupted by colonialism, globalization, and capitalism and interpreted the production of the cargo as best they could from their [spiritual] understanding of the world. Many in the west may find their lack of understanding of how these goods are manufactured laughable, but I would wager many in western civilization are just as ignorant of the manufacturing process behind many of the products they feel entitled to. From the minerals mined to create their cell phones, the petroleum used for the plastic forks thrown into their take out, and the textiles produced and assembled in sweatshops for the fast fashion world of today, modern society’s exploitation of the world’s resources for cheap cargo has put a heavy burden on the health of our planet and to those less fortunate, forced to earn their living manufacturing and delivering our cheap cargo.

"A global shipping network creates unfathomable amounts of waste and exploitation for workers, coalescing in the convenience of next-day-delivery for Prime members. We have our own rituals to bring in our cargo, while unaware of its impact on our planet, humanity at large, and our own personal humanity. The reliance on mass- produced goods leads us to no longer rely on our own abilities of survival and, more importantly, gives us the illusion that we do not rely on each other or the planet for this survival. This is the dogma of the first world cargo cult: the selfish entitlement to goods based on the ritualistic exchange of capital, built on the backs of unsustainable economic and ecological systems.”