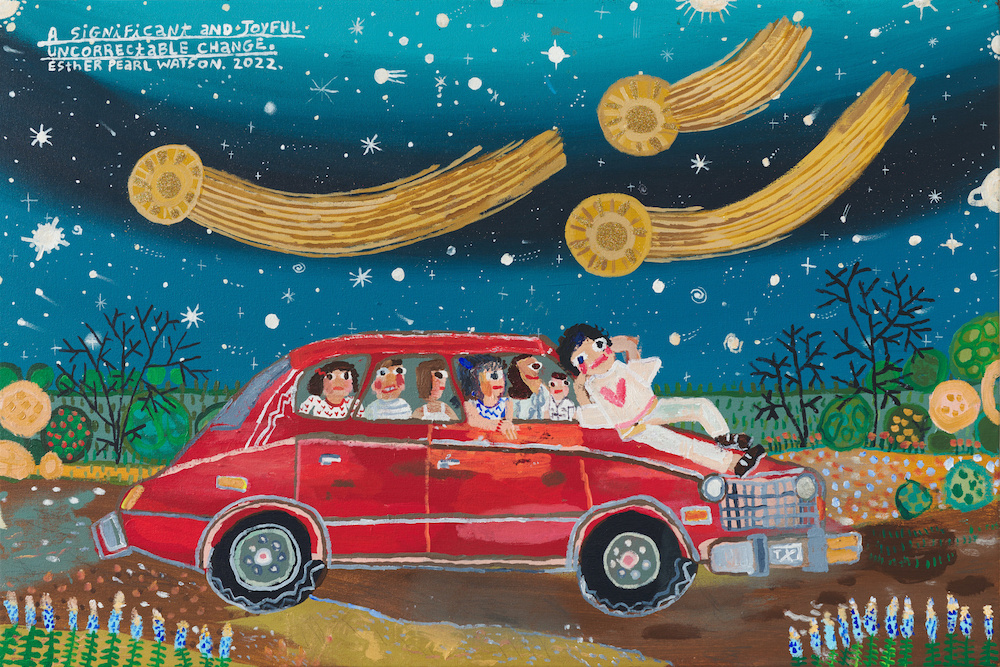 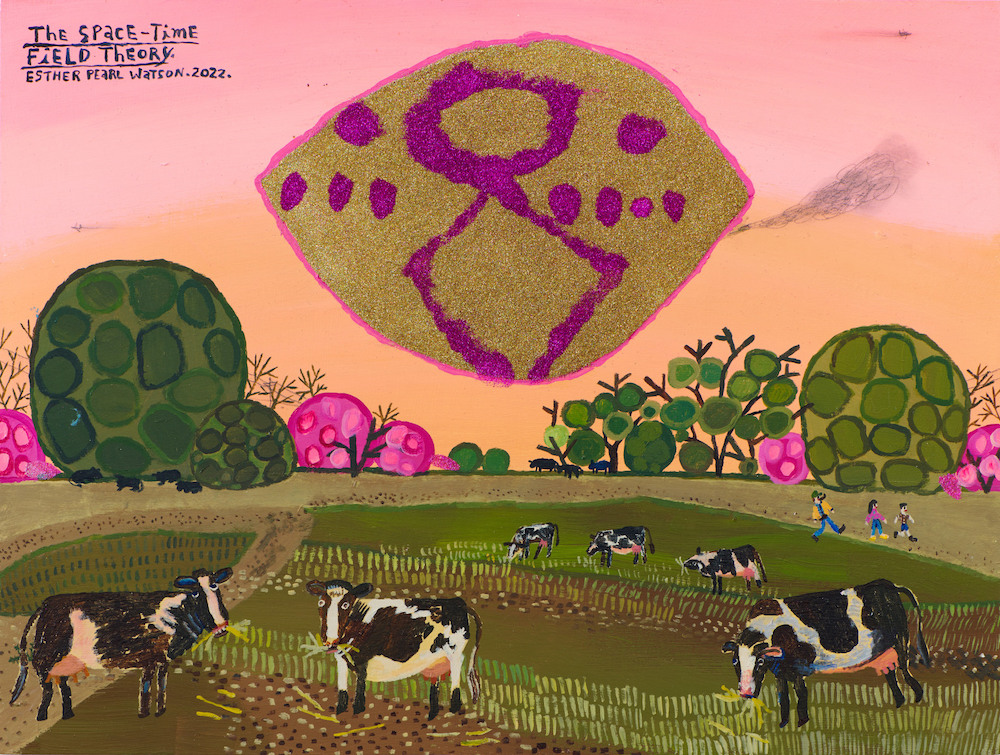 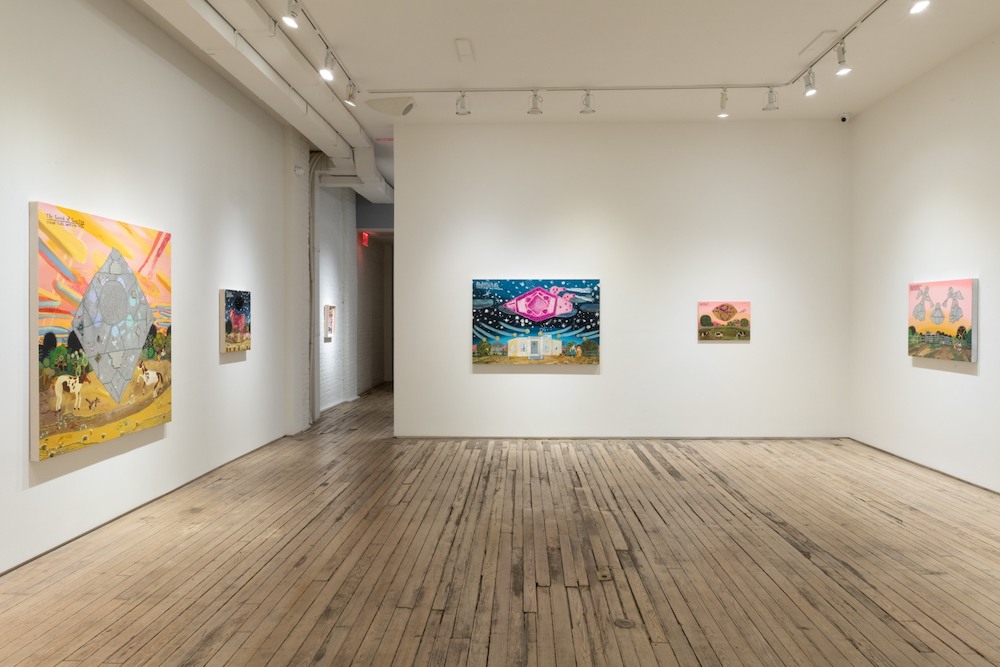 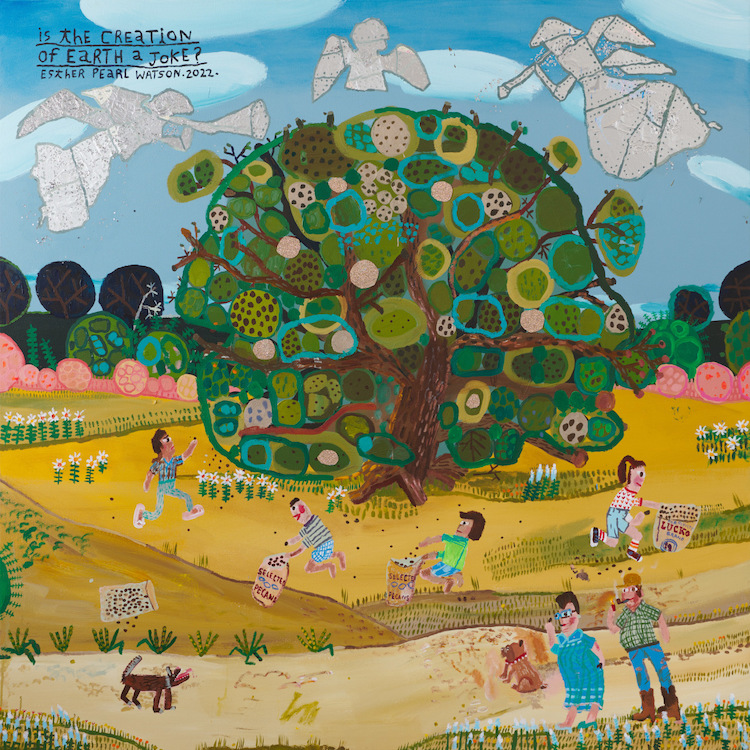 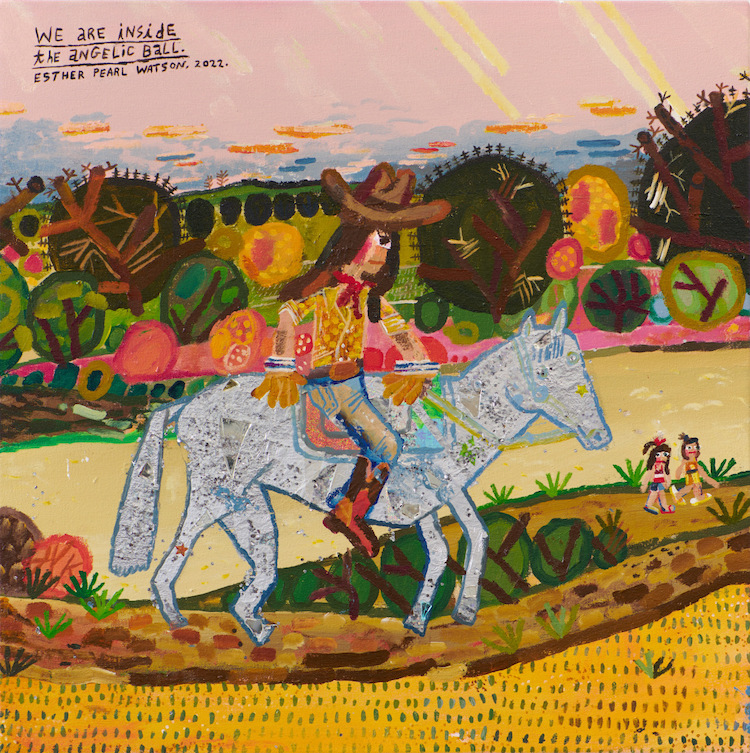 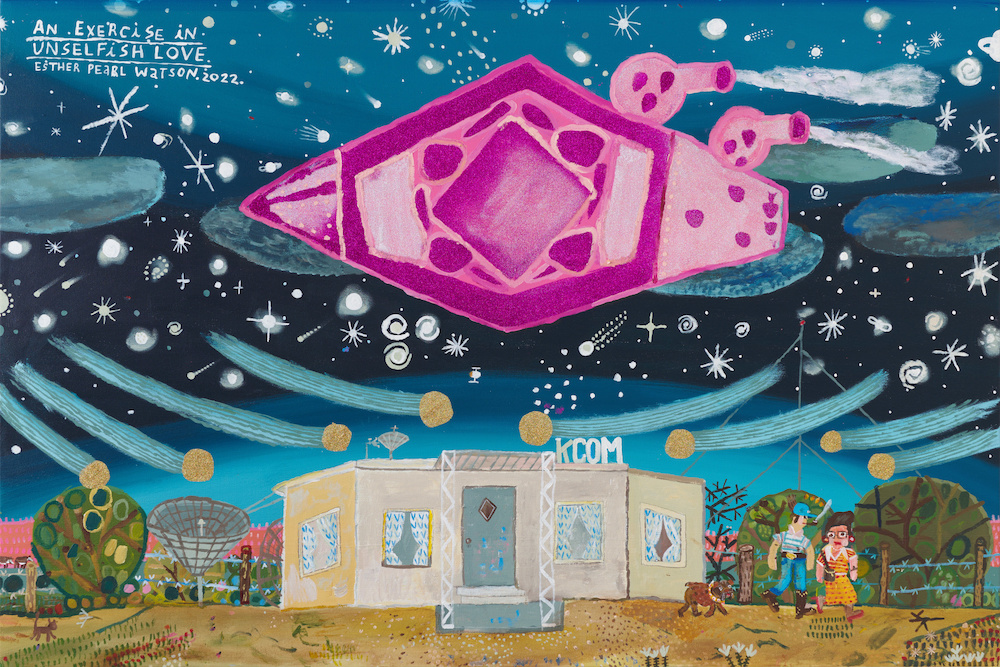 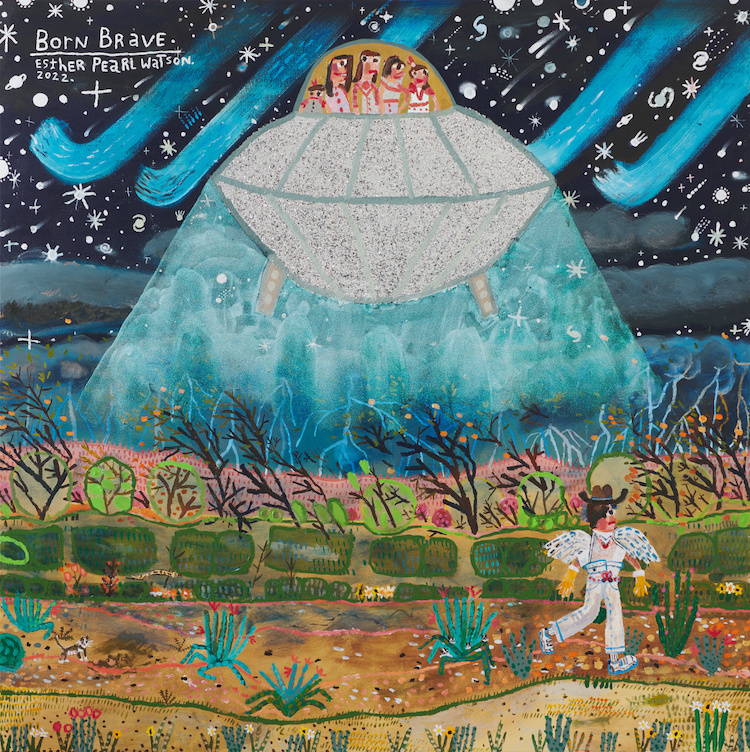 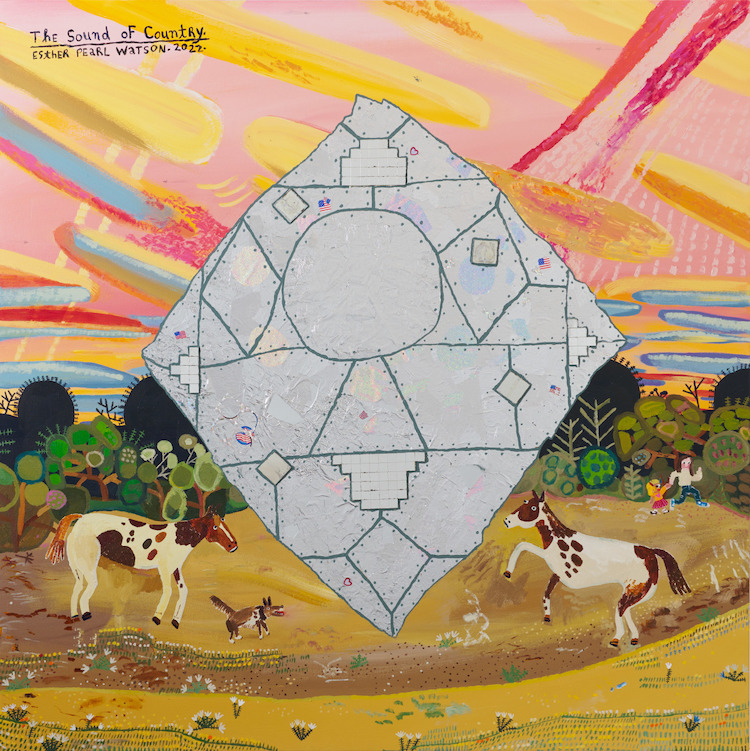 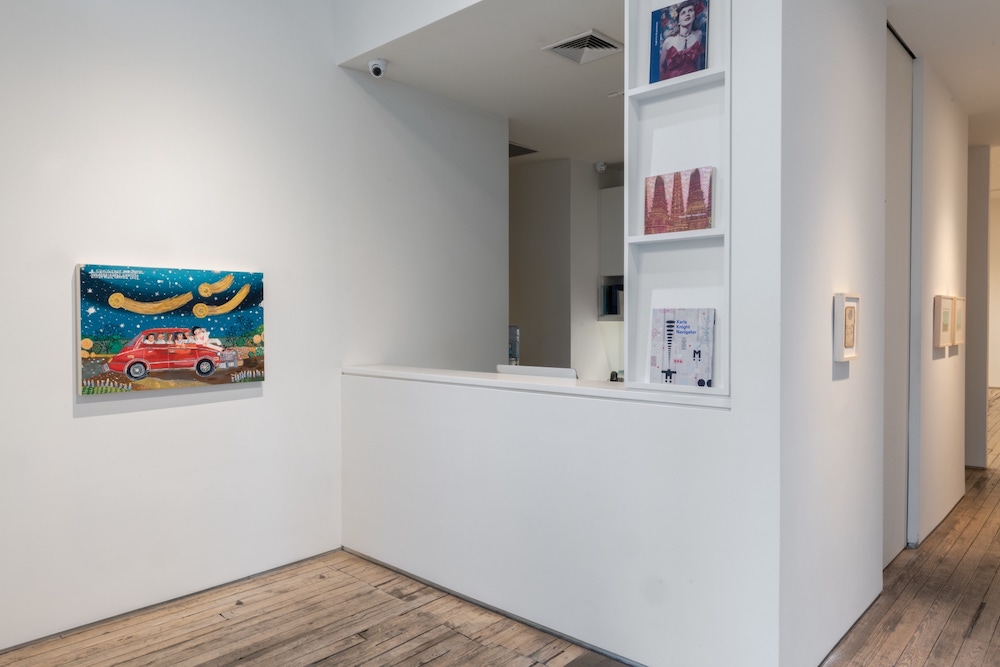 Andrew Edlin Gallery is pleased to present its first solo exhibition for Esther Pearl Watson. The gallery featured her work in the 2018-19 group exhibition April 14, 1561 and more recently in the 2021 edition of Art Basel Miami Beach.

In his 1959 book Flying Saucers: A Modern Myth of Things in the Skies, psychoanalyst Carl Jung considered the significance of UFOs in rumors, dreams, and art. “They behave not like bodies, but like weightless thoughts,” he wrote. “Such an object provokes, like nothing else, conscious and unconscious fantasies.” Winking with aluminum foil, stick-on mirrored tiles, and craft glitter, the prominently placed UFOs in Esther Pearl Watson’s paintings of everyday scenes inspired by her childhood—cow-dotted fields, family car rides—reflect the outsize presence of those fantasies in the narrative of her life.

Watson grew up in a string of small Texan towns watching her father, an Italian immigrant who had been adopted into an American family at the age of seven, attempt to build a functional flying saucer in the yard. The amateur engineer, who might also be characterized as an outsider artist, hoped to sell his homegrown spacecraft designs to NASA and use the earnings to alleviate financial hardship. In this light, the allocation of funds to roll after roll of aluminum foil instead of groceries declared a belief in the American dream and an investment in the future. A spaceship hovering in a picture by Watson, like a saint floating in a votive painting, is a miracle that indicates rock-bottom: as much an expression of artistry and hope as a symbol of mental health struggles and cycles of poverty.

In her resoundingly flat, vibrantly colored visual narratives, Watson engages with the folk-art genre of memory painting. Often associated with Anna Mary Robertson Moses and Clara McDonald Williamson, memory painting has been described by Roger Cardinal as “the pictorial production of self-taught artists, typically countrywomen of advanced years [that] documents situations, events, and practices of the folklife of a bygone age, and draws upon personal and collective reminisces,” characterized by “an evenly lit perspectival space, with small details rendered meticulously and decoratively.” Taking its title from a malapropism in a recent email that Watson received from her father, Guardian of Eden is composed of 13 scaled-up acrylic paintings on sturdy canvas or wood panel and 3 drawings on found book or paper. While these works look to memory, they also draw upon the present, collaging events or settings from childhood with the artist’s more recent experiences of mothering, caregiving, and navigating familial relationships.

All hailing from 2022, the works on view were made in the thick of national crises of health, mental health, and care, which Watson—who experienced dialed-up caregiving demands firsthand—compares to “a high-pitched sound being ignored.” In “The Sound of Country” (2022), a large, sharp-edged UFO crafted from aluminum foil and accented with American flag stickers descends out of a riotous pink and yellow sky, unsettling two horses and a dog in a bucolic field. To the right of the frame, Watson protectively leads her daughter away from the scene by the hand. At a young age, Watson’s daughter drew pink flying saucers, which the child—to Watson’s initial surprise—associated with her mother. In “An Exercise in Unselfish Love” (2022), a glittery pink mothership hovers above the small-town radio station where the artist’s grandfather, a primary caregiver for Watson and her siblings, worked, communicating with listeners he couldn’t see. Watson’s father, who now lives in Italy, asserts in emails that he receives spacecraft instructions from angels, invisible advisors whom the artist portrays as glittery foil constructions in “Is the Creation of Earth a Joke?” (2022). The painting depicts a childhood memory: under their grandparents’ watchful eye, Watson and her siblings gather pecans in feed sacks to sell at the market, the proceeds from which will fund the purchase of a toy. In the sky above the scene float the silver seraphs with their trumpets, making sounds that everyone pretends not to hear. – Cassie Packard