Dave P. had a very different VISION of how to celebrate the 20th anniversary of Making Time. In May 2020, at the height of the global pandemic, DJ and Promoter, Dave P.’s legendary, Philadelphia-based TRANSCENDENTAL, futuristic, musical institution turned 20, making it one of the longest running dance parties in all the world. The Making Time concept was designed to bring together a community of smaller DJ nights happening around the city under one "mega-club" roof. Each party featured multiple resident and guest DJs alongside live band performances, which was a novel concept at the time. Throughout it’s 20 year span, Making Time has hosted performances from the world’s most celebrated talent including LCD Soundsystem, The Strokes, Hot Chip, Bloc Party, Interpol, Soulwax Nite Visions, The xx, Ben UFO, Nina Kraviz, and many more.

Ticket link: ​www.dice.fm/mtxx​ // $5
$1 of each ticket will be donated to charity (PLSE: ​https://www.plsephilly.org​ and the Plus 1 for Black Lives Fund: ​https://www.blacklives.plus1.org​)


Dave P. would not let a global pandemic stop his TRANSCENDENTAL 2020 VISION and his restless quest to achieve PEAK levels of futuristic musical TRANSCENDENCE and prevent the city of Philadelphia (and now THE WORLD) from celebrating 20 years of Making Time. from Friday October 2nd - Sunday October 4th, 2020, Dave P. brings you MTXX, a 3-day, 36-hour streaming Making Time 20th Anniversary TRANSCENDENTAL Social DistancingTM Celebration, presented alongside his friend and futuristic visual warrior of the nite, Ricardo Rivera of ​Klip Collective​; THIS IS WHO WE ARE NOW, DICE, and Beatport. This is a unique, ONE TIME ONLY, EXCLUSIVE LIVE EXPERIENCE !!! This stream will not be archived.

Dave P’s TRANSCENDENTAL 2020 VISION has evolved into something much bigger than he ever thought it could be. TRANSCENDENTAL Holographic TechnologyTM (THT), created by Making Time futuristic visual pioneer, Ricardo Rivera, allows Making Time to TRANSCEND SPACE & TIME as it enables DJs from around the world to be TRANSPORTED into an immersive video and light holographic art installation. Thanks to THT, Making Time 20th anniversary will be a GLOBAL celebration of futuristic musical TRANSCENDENCE with a lineup featuring some of the greatest futuristic musical pioneers of our time.


YES, HOLOGRAMS are an INTEGRAL component of Dave P.’s TRANSCENDENTAL 2020 VISION of the 20th Anniversary of Making Time.

Although this TRANSCENDENTAL Holographic TechnologyTM (THT) truly sets this GLOBAL Making Time 20th Anniversary TRANSCENDENTAL Social DistancingTM Celebration apart from other streaming experiences, some DJs will be featured IRL within the stream from both Pappy & Harriet’s in Joshua Tree, CA produced by THIS IS WHO WE ARE NOW, Good Room in Brooklyn, NY, and within the immersive video and light installation in the Klip Collective studios in Philadelphia.

In addition, this GLOBAL Making Time 20th Anniversary TRANSCENDENTAL Social DistancingTM Celebration will be ticketed via the global pioneer in virtual event ticketing, DICE, as we begin to create a new paradigm that involves reevaluating the significant value in the live performance work of live electronic artists forced online due to COVID. Now more than ever it is vital for artists to be paid for their work, whether in the club or virtual, and this GLOBAL Making Time 20th Anniversary TRANSCENDENTAL Social DistancingTM Celebration will provide a much-needed revenue source for artists around the world who are struggling financially due to COVID. This 3-day live streaming experience is ticketed at just $5 via DICE with one dollar of each ticket being donated to charity (PLSE: ​https://www.plsephilly.org​ and the Plus 1 for Black Lives Fund: ​https://www.blacklives.plus1.org​) and the remaining $4 of each ticket being split equally among all artists performing. Getting artists paid for their work is an INTEGRAL component of Dave P.’s TRANSCENDENTAL 2020 VISION. 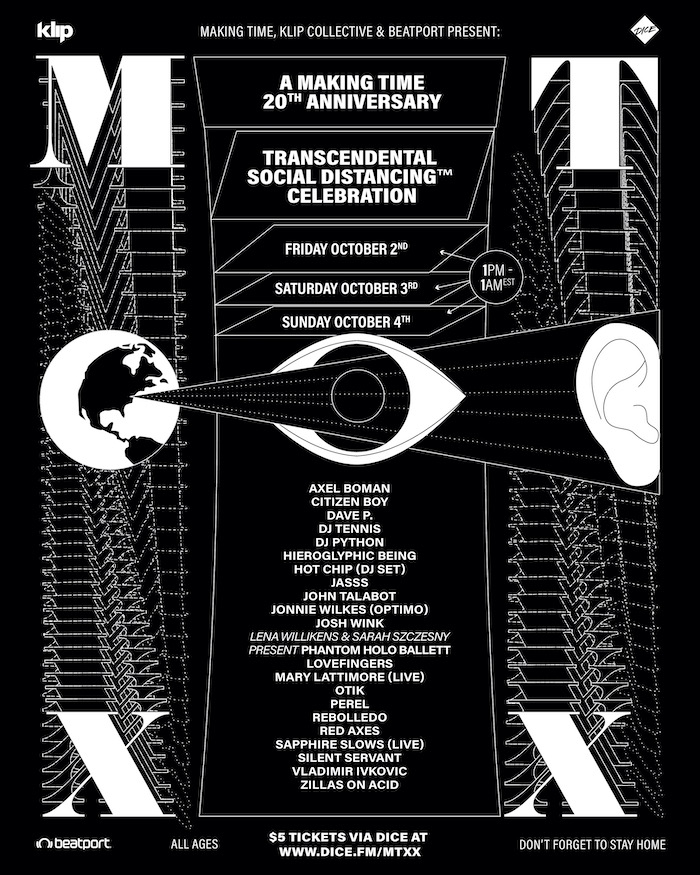