Located in the Soho neighborhood of Manhattan, the Drawing Center hosts a first-of-its-kind exhibition of private doodles from great German painter, Neo Rauch. Aus dem Boden/From the Floor is open from April 12 to July 28, 2019

The idea for the exhibition first came about at a dinner party in Manhattan, where Rauch met Brett Littman who at the time was the director of the Drawing Center. Littman was invited to visit Leipzig and was directed towards the repository of drawings - a large cabinet in Rauch's studio.

Having been accumulated over three decades, the drawings had not been viewed by anyone other than Rauch, his studio manager, and possibly his wife, the painter Rosa Loy. Jubilantly unearthing the contents of drawers full of disheveled piles, Littman photographed about 400 drawings, while making stacks organized by scale, material, and subject matter - the basis for a curatorial structure. 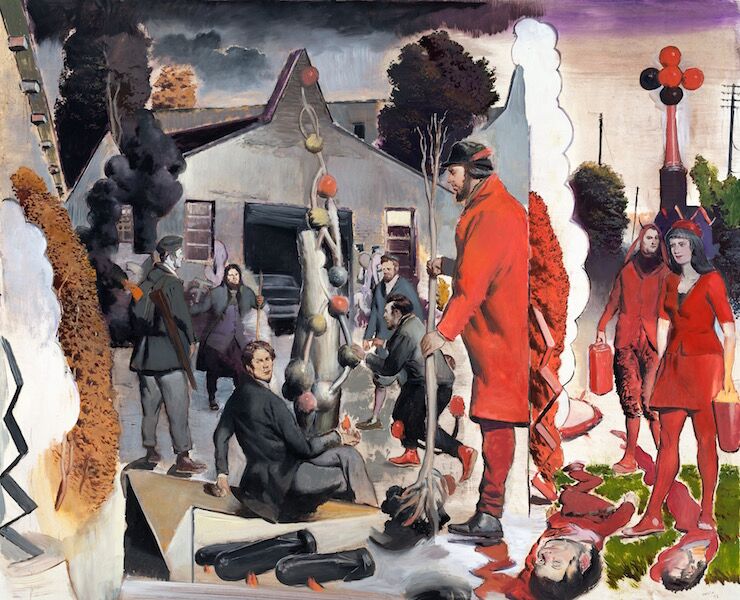 Organized in partnership with the Des Moines Art Center, just over 150 works-on-paper are in the exhibition, which first debuted in Iowa last fall before being reinstalled in New York this spring. The layout is roughly chronological with the drawings framed and hung in salon-style clustered groups that are juxtaposed against larger paintings on paper.

Although it was straightforward to gain access to the physical works, deriving their meanings is quite elusive even for their creator. Over the years, Rauch has been very ‘tight-lipped' with information about his process and the ideas behind his work. In a walking tour given to a limited number of Drawing Center patrons, Rauch was more open and began to offer some insights. Littman led the tour and prodded Rauch to speak with some help from a translator. For the most part, Rauch was reserved in his answers, especially avoiding to approach his work in the language of semiotics and symbols.

With the opening celebrations having taken place the night before, Rauch shared his new realization at the beginning of the walkthrough: “I am a doodler - I learned this word yesterday. I turn off my brain and let it flow and who knows what comes through my pencil onto the paper.” 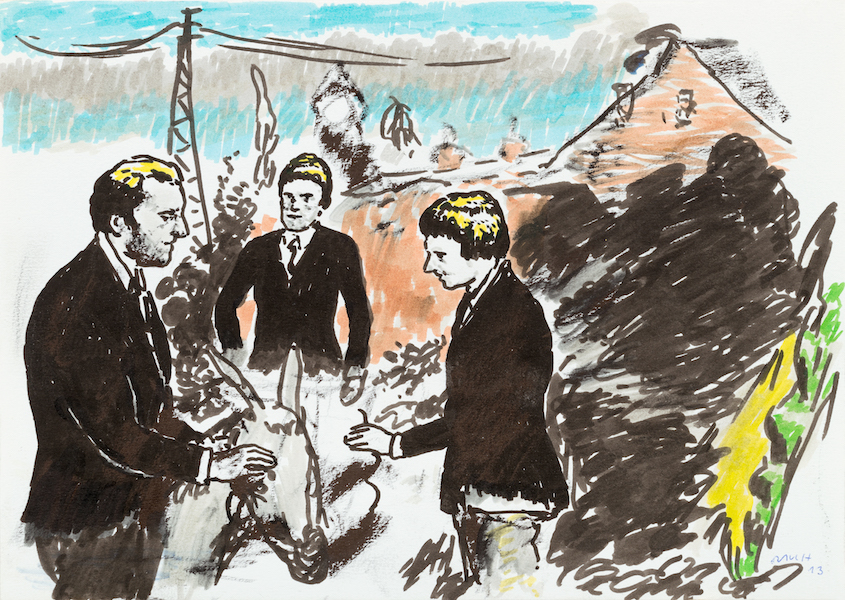 In an interview with me earlier this year, Rauch shared, “As part of my work, drawing is considered a kind of by-catch; she gets into the net, yet the hunt was meant for larger prey. Completed in an almost trance-like state, these doodles are at best, finger exercises that take place in the run-up to a canvas project. However, they do not prepare them directly, but only charge the space between me and the canvas atmospherically."

Rauch does not work from references, models, or preparatory drawings. In the walkthrough, he shared that “a character is often created from 0-100 or 200 on canvas. But sometimes, it appears on one of my drawings first and gets permission to be upgraded as a figure on the painting.” Each foray onto canvas or paper is the result of intuitive thought processes that Rauch himself does not fully understand. He admitted that if he knew the source of his imagery, then he'd likely be tempted to exploit and exhaust it.

In conjunction with the exhibition, the Drawing Center has also released an exhibition catalog, issue 137 of the Drawing Papers. A cheaper alternative than traveling to New York to see the exhibition for $25, the catalog contains crisp images of the drawings, a great interview between Rauch and artist-friend, Ena Swansea, as well as essays by the exhibition's two curators.––David Molesky