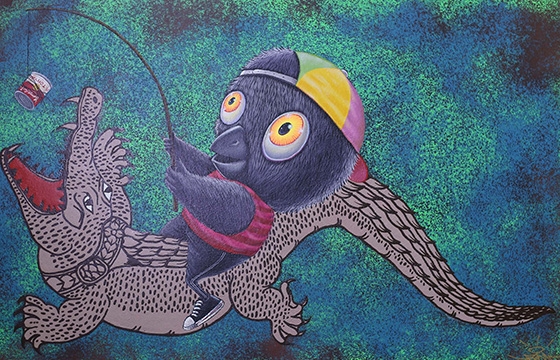 Two of Asia's most acclaimed and incisive artists make their American debut at Chicago's Vertical Gallery this weekend. Alex Face and MUEBON present Mythical Creatures, a duo show spotlighting all new work from two artists featured within the famed Souled Out Studios collective.

“Alex Face and MUEBON introduce people to a different style of street art than they're used to seeing. These are two of Asia's biggest street artists. Both are character-based and carry deep meaning in the messages they're getting across, so pairing them was a natural fit. We're thrilled to host their U.S. debut exhibition." –Patrick Hull, owner and founder of Vertical Gallery 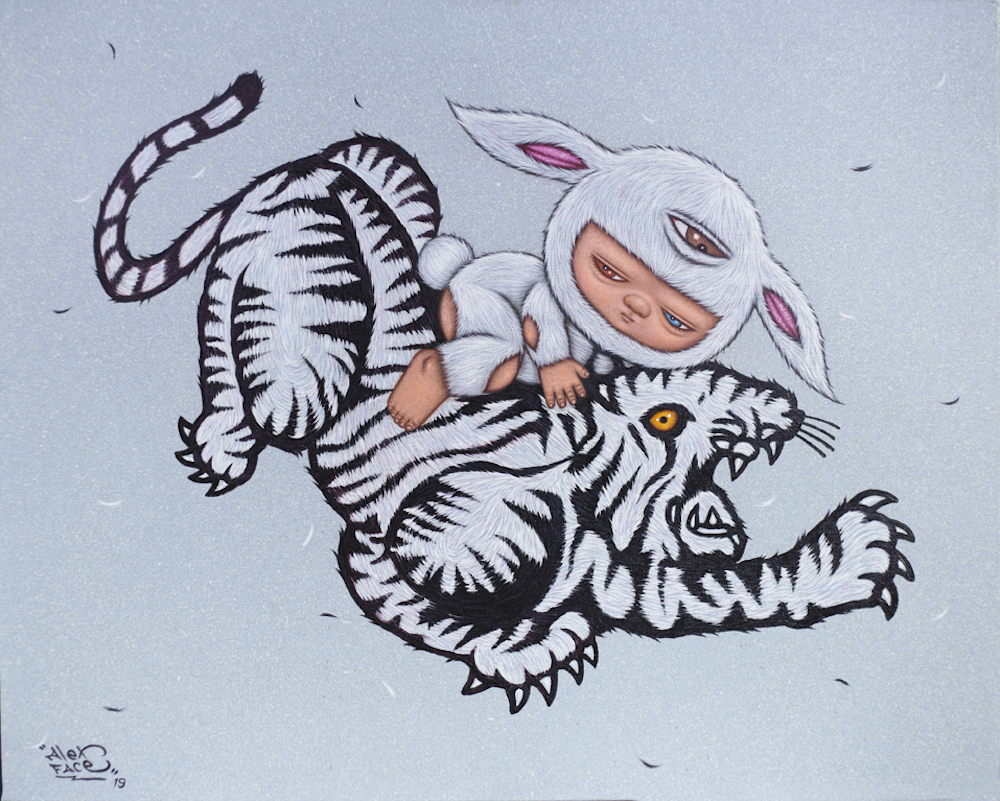 Thailand native Alex Face is best known for his signature character Mardi, a three-eyed child often dressed in a fuzzy rabbit costume, who was inspired by the artist's young daughter. Mardi is world-weary and wry, challenging viewers to consider the legacy children will inherit and what the future holds for successive generations. Long a fixture across the Bangkok cityscape and Thai countryside, Mardi now adorns walls in locations including Tokyo, Seoul, Taipei, Jakarta, Oslo, Amsterdam, Paris, and soon, Chicago.

Alex Face discovered American graffiti while studying fine art at Bangkok's King Mongktut University Institute of Technology, where he acquired two cans of spray paint–one red, the other white–which he put to creative use on his own car. He first painted his name, then moved on to a self-portrait, with a flourish that inspired his moniker and gained recognition across the globe. 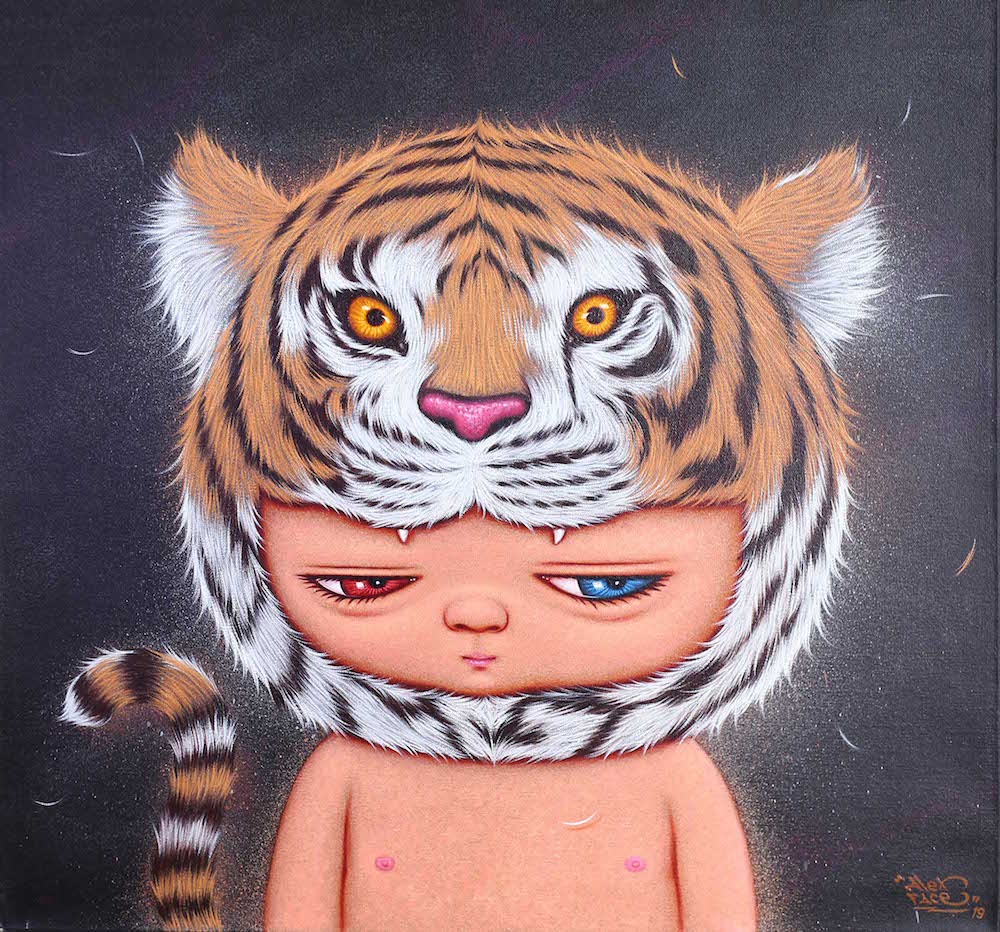 Bangkok-based MUEBON is renowned for biting social commentary on wealth disparity, environmental activism, and the pervasive influence of contemporary media. He delivers messages via a rotating cast of colorful characters, including PUKRUK, a flightless cartoon bird, and Mr. TV, possessor of a television screen face. MUEBON is perhaps most synonymous with his Mickey Mouse-inspired skull stickers and wheatpastes, urging viewers to discard feelings of anger, frustration and hopelessness and embrace acceptance and inner peace.

A product of first-generation Thai street artists, MUEBON plays a pivotal role in propelling the craft to notoriety and respect across his homeland and beyond. Raised in the slums of Thonburi, MUEBON, an alias translating to “fidgety hands”, he grew up obsessed with Japanese manga and began as a graffiti artist as a teenager, often painting under the cover of darkness to avoid local police. He later defied the odds, earning a fine arts degree and graduating with honors from the Rajamangala Institute of Technology in 2005. Today, street art remains MUEBON's passion, exhibiting paintings and sculptures in galleries across Southeast Asia, Australia, Japan and Moscow, and partnering with the luxury label, Hermès, in 2018. 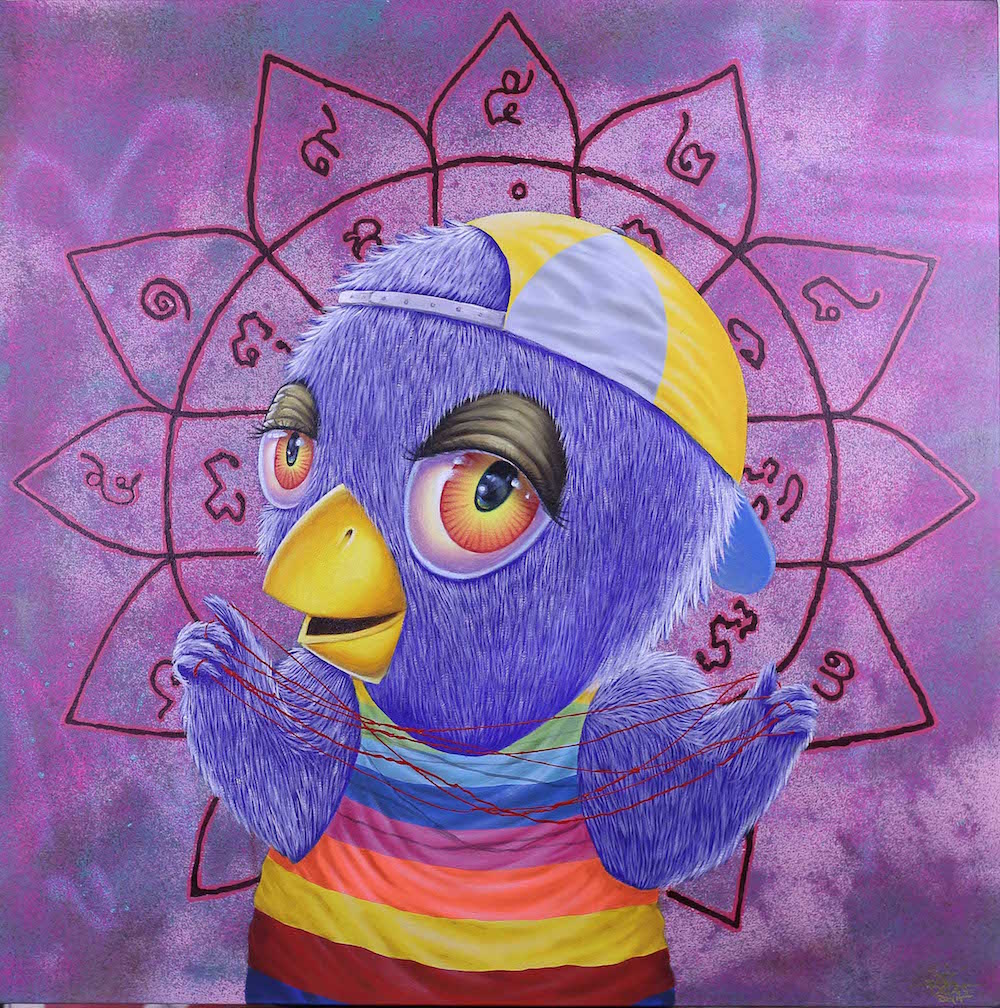 "For over 10 years, I've seen both MUEBON and Alex Face paint tirelessly on the streets, day in and day out, with incredibly recognizable styles. Neither artist has borderless skill with just a spray can, but also with oils, watercolor, sculpture and print, making a seamless translation into the gallery." –Chris Bowden, co-founder of Souled Out Studios

Alex Face and MUEBON's Mythical Creatures opens at Vertical Gallery this Saturday, August 10th, with an opening reception from 6 to 10 pm, and is on view through August 31, 2019.