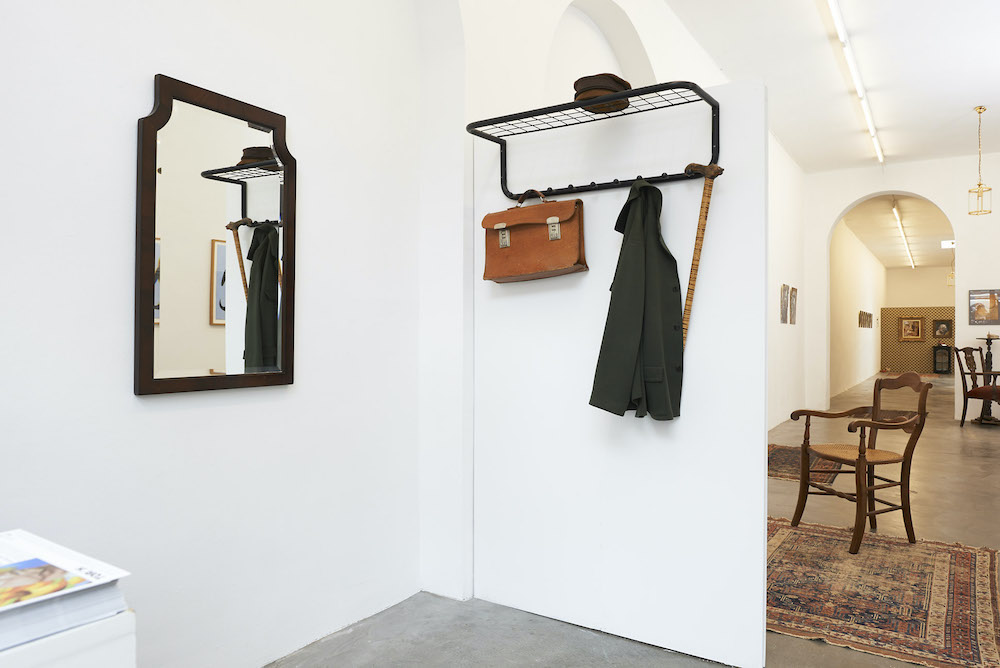 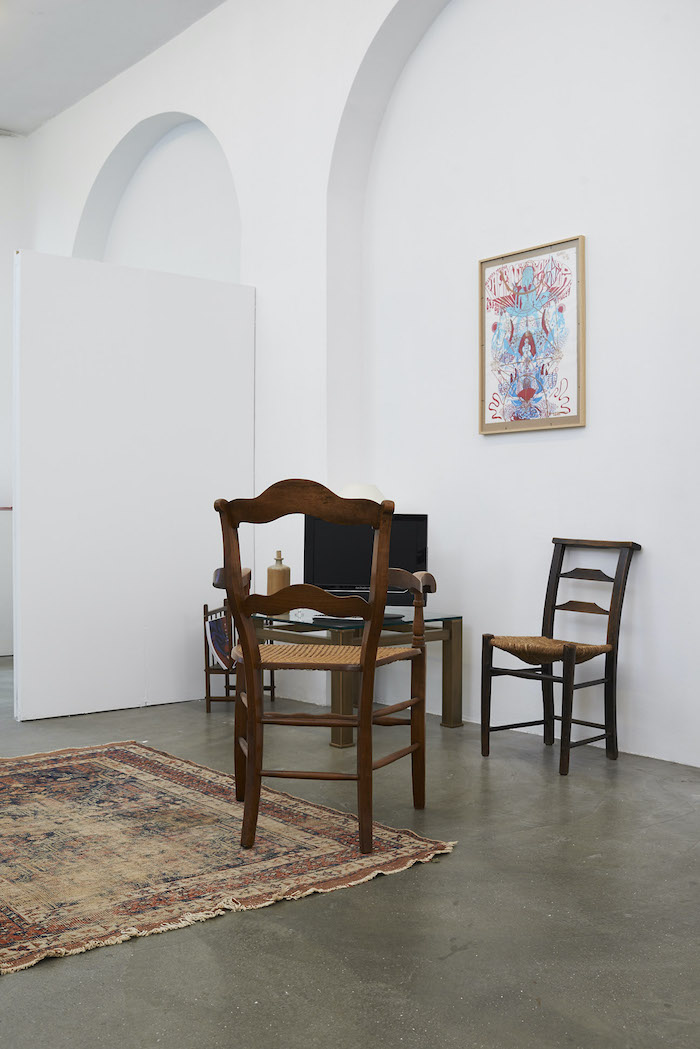 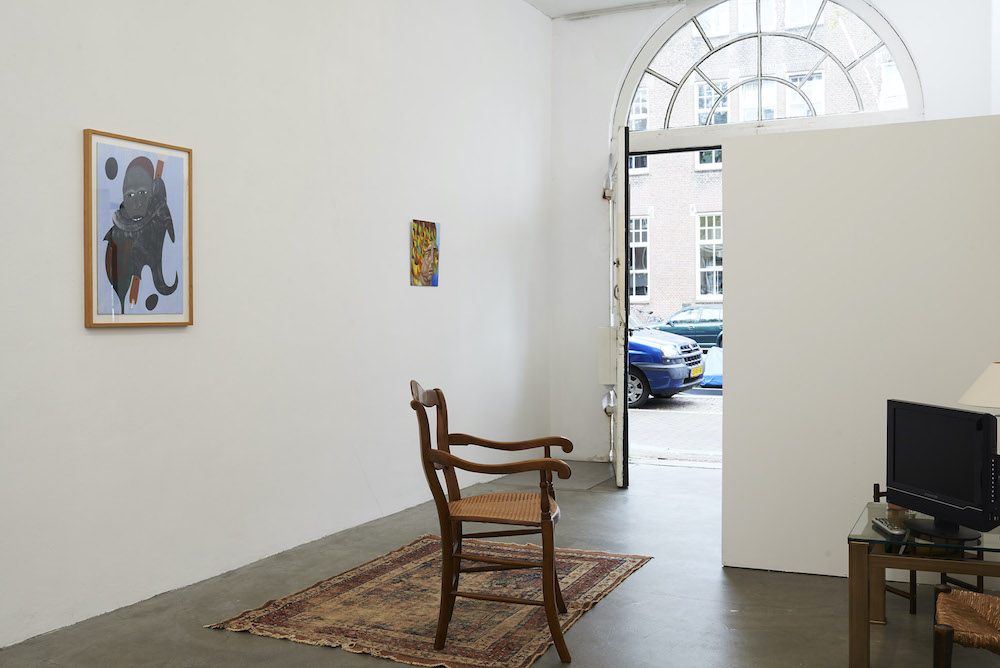 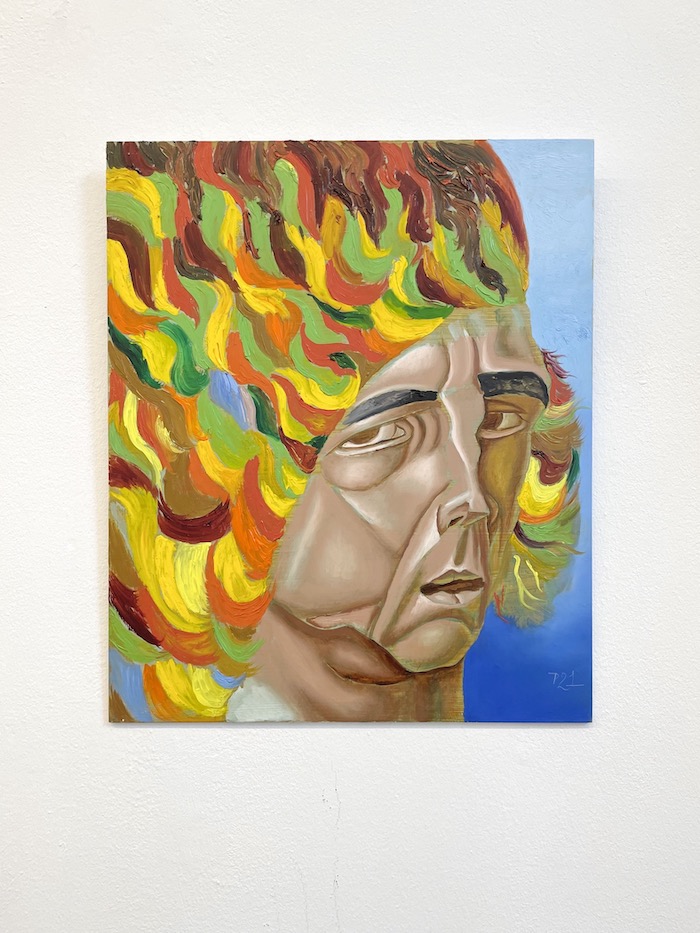 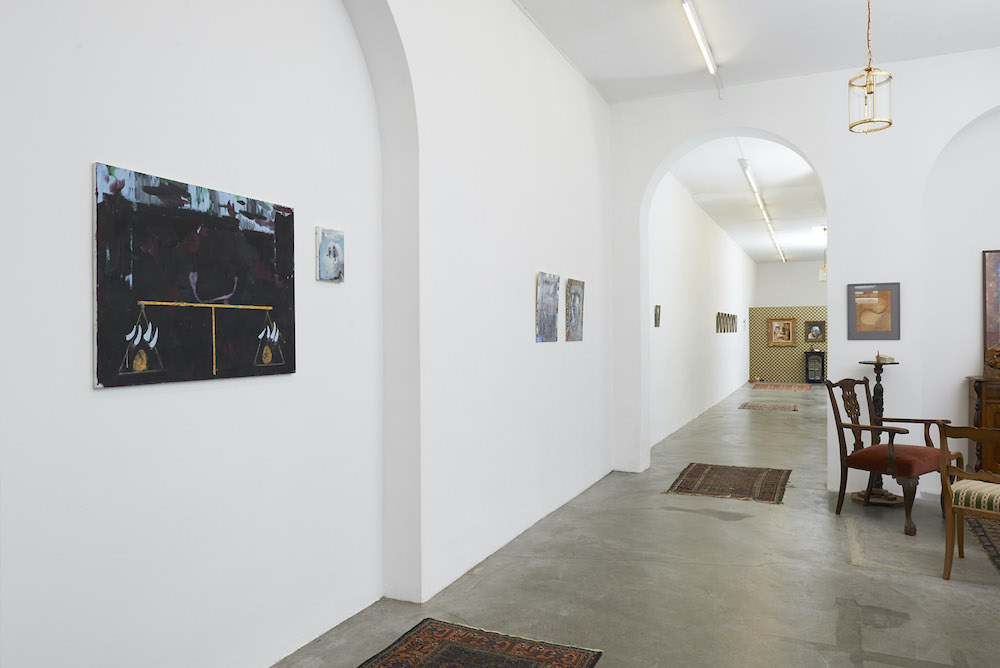 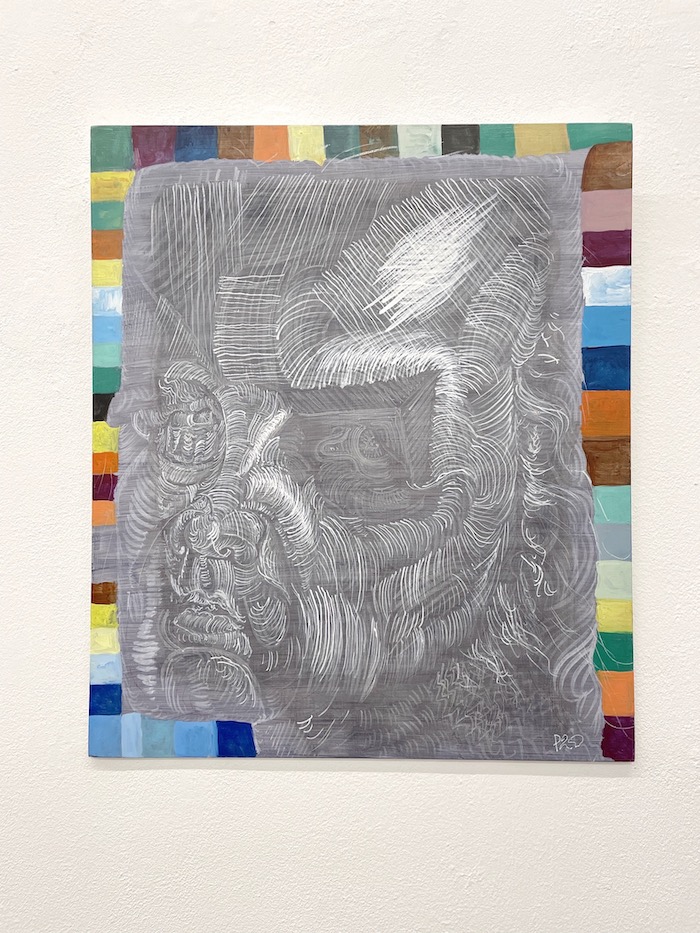 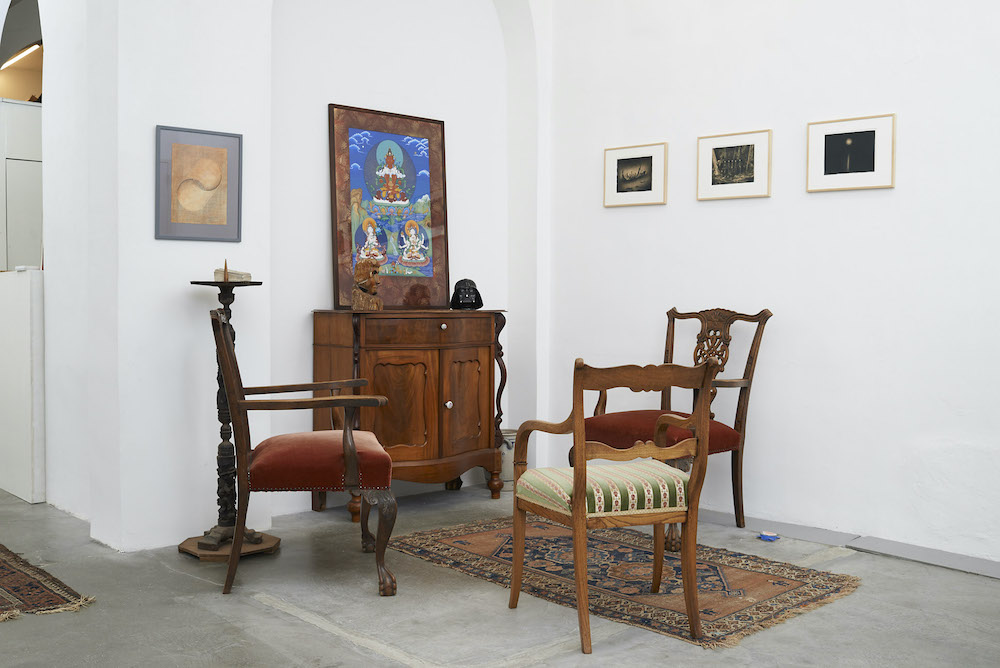 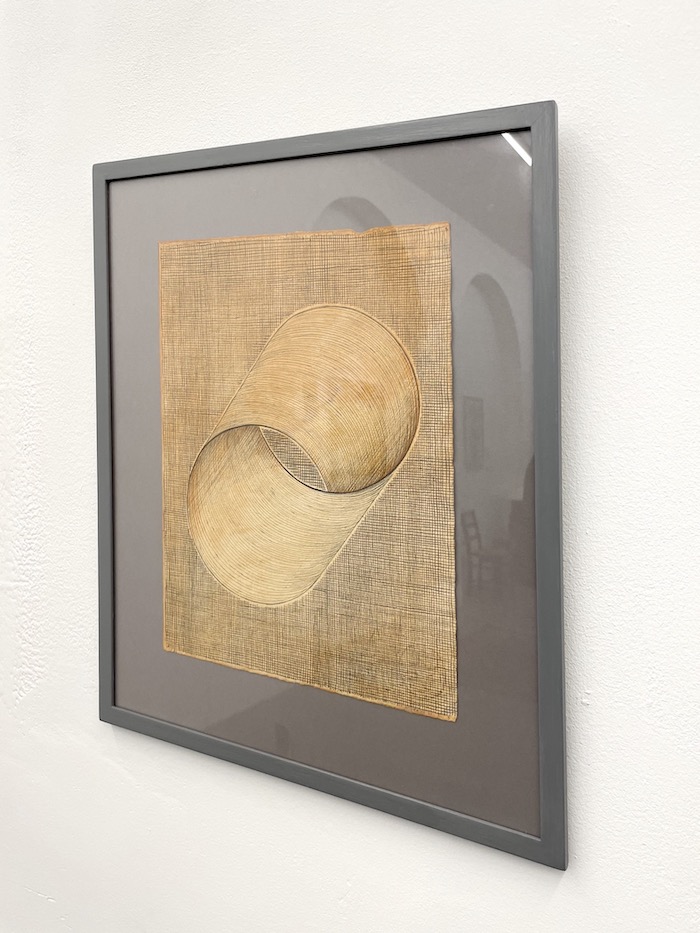 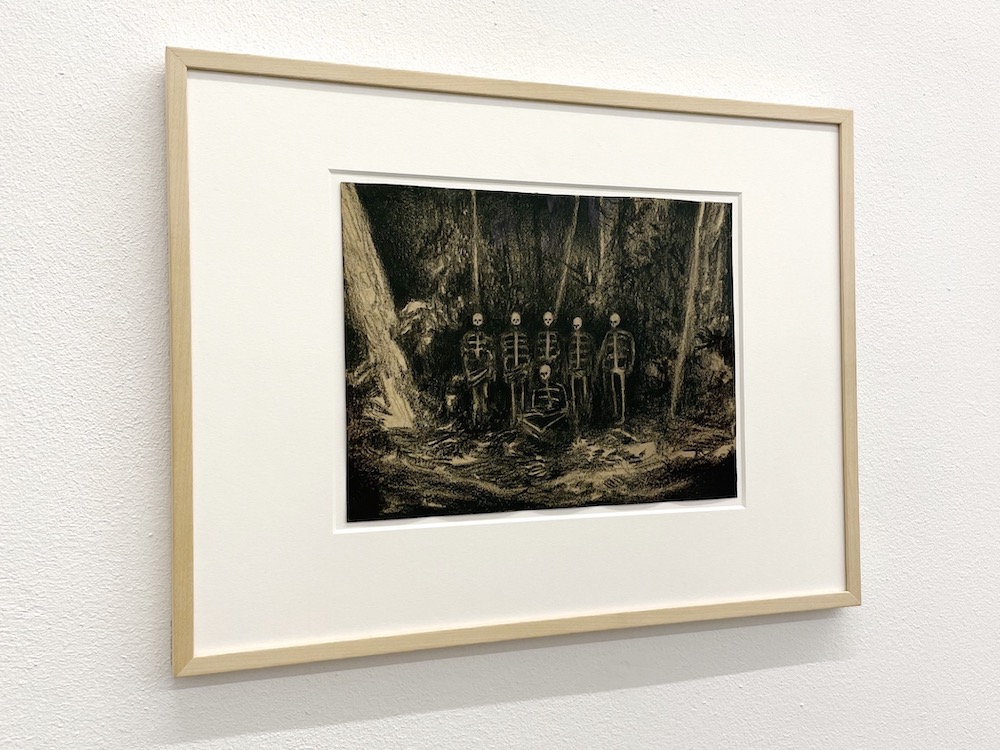 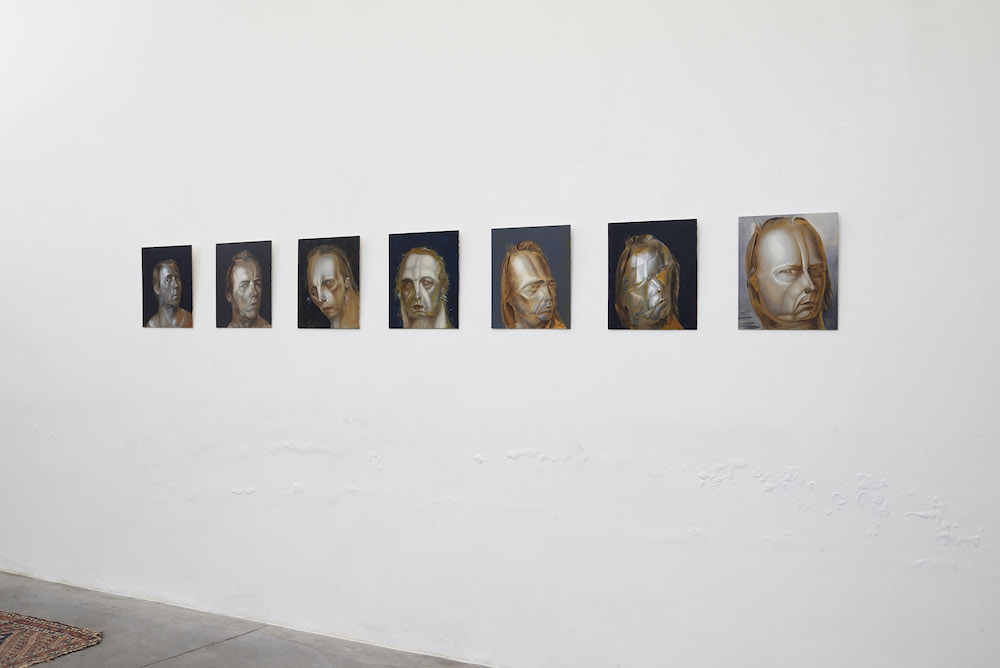 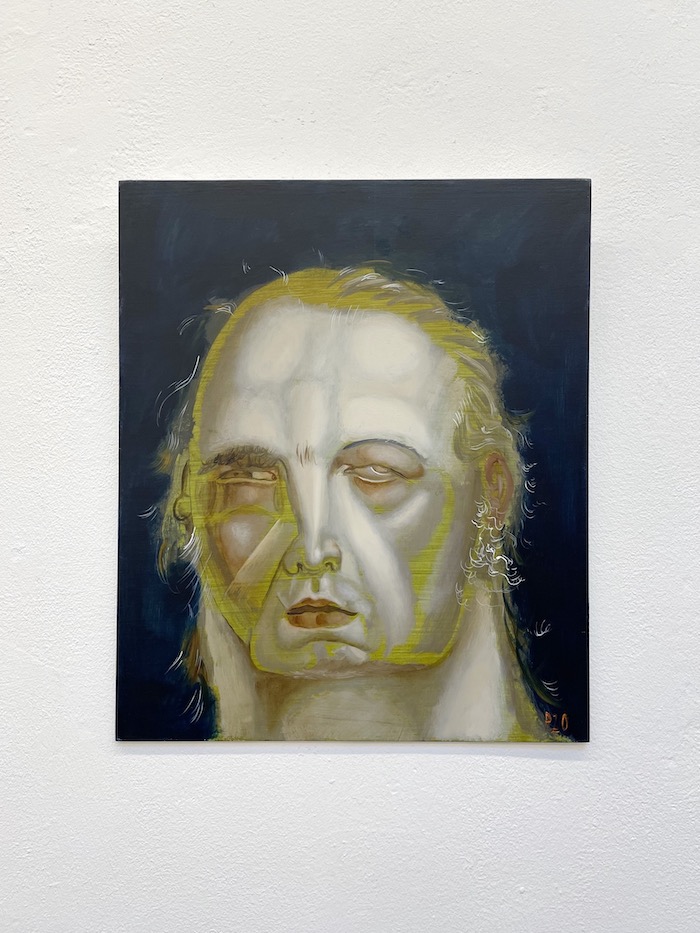 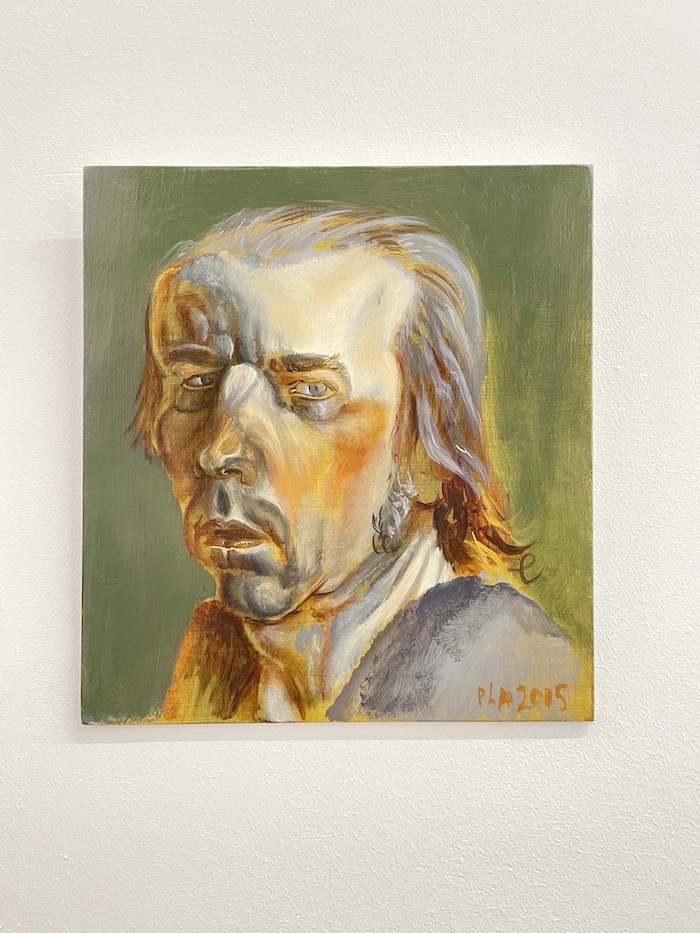 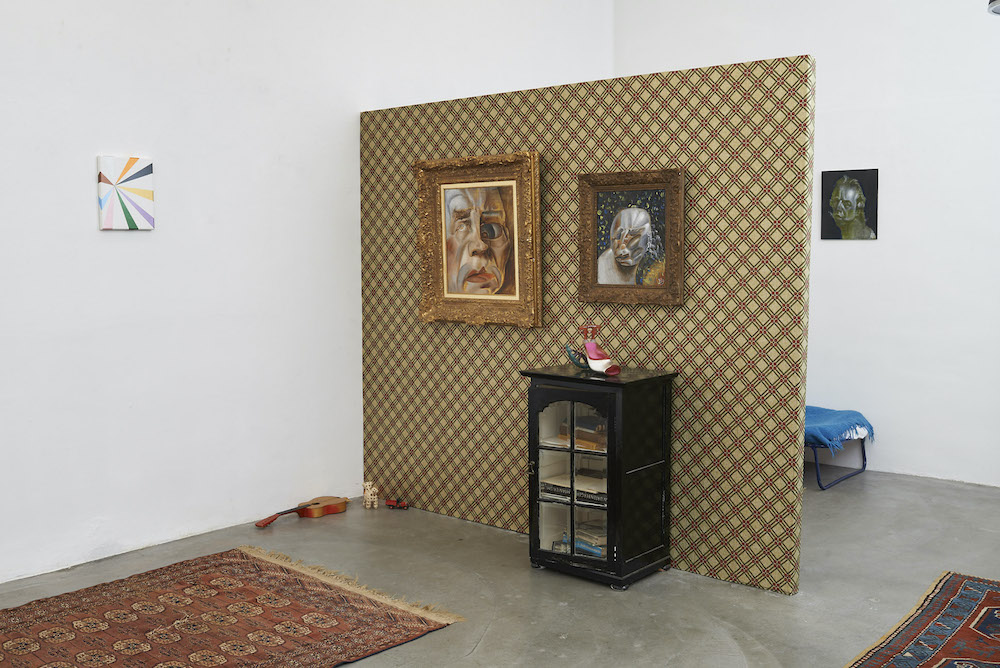 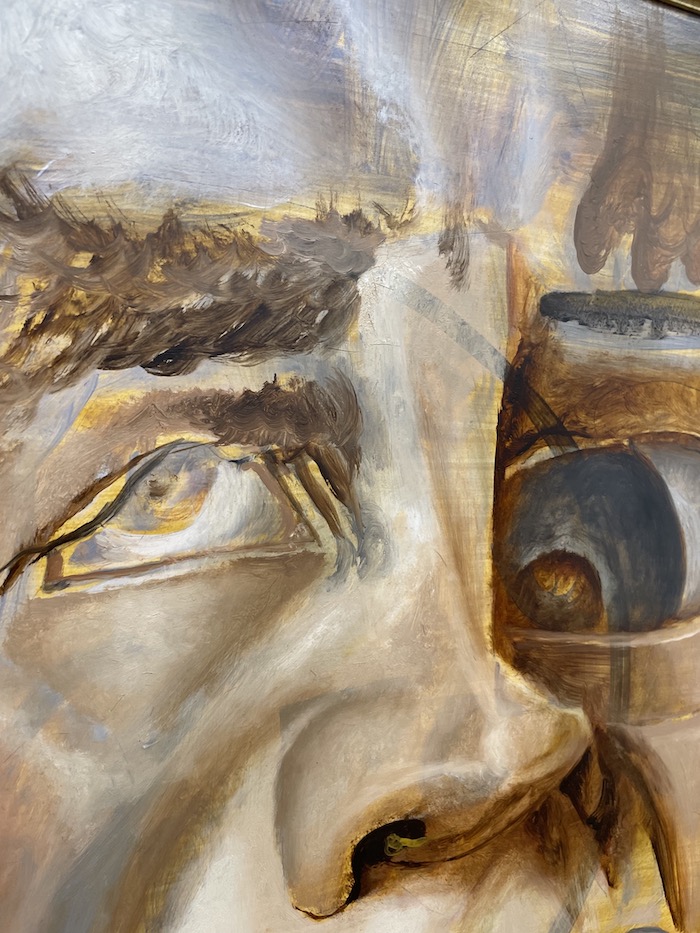 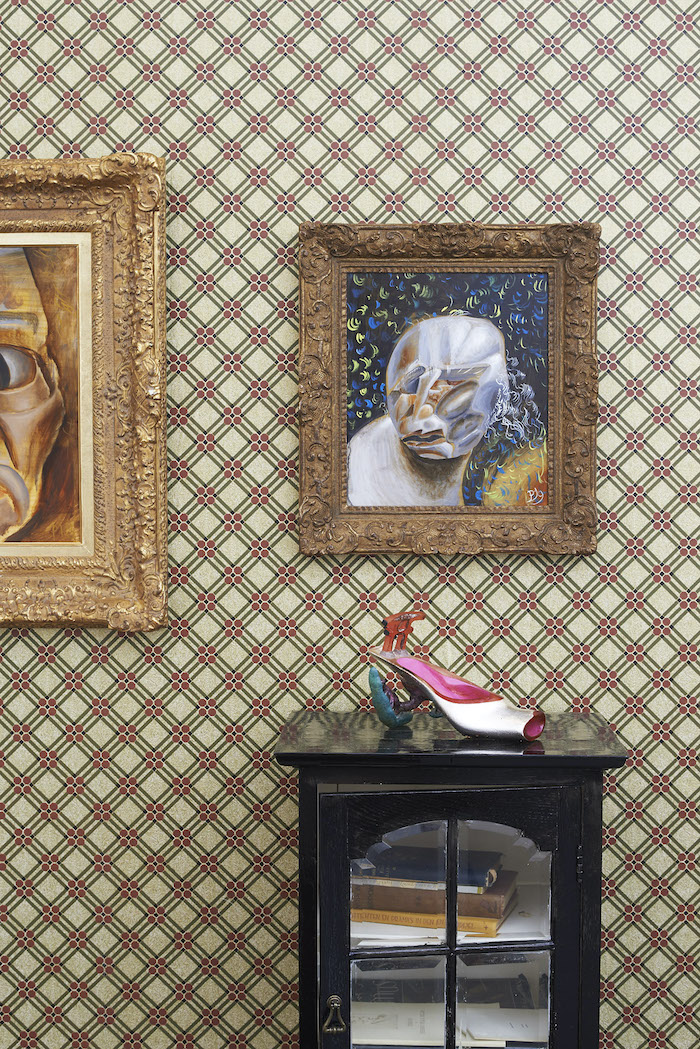 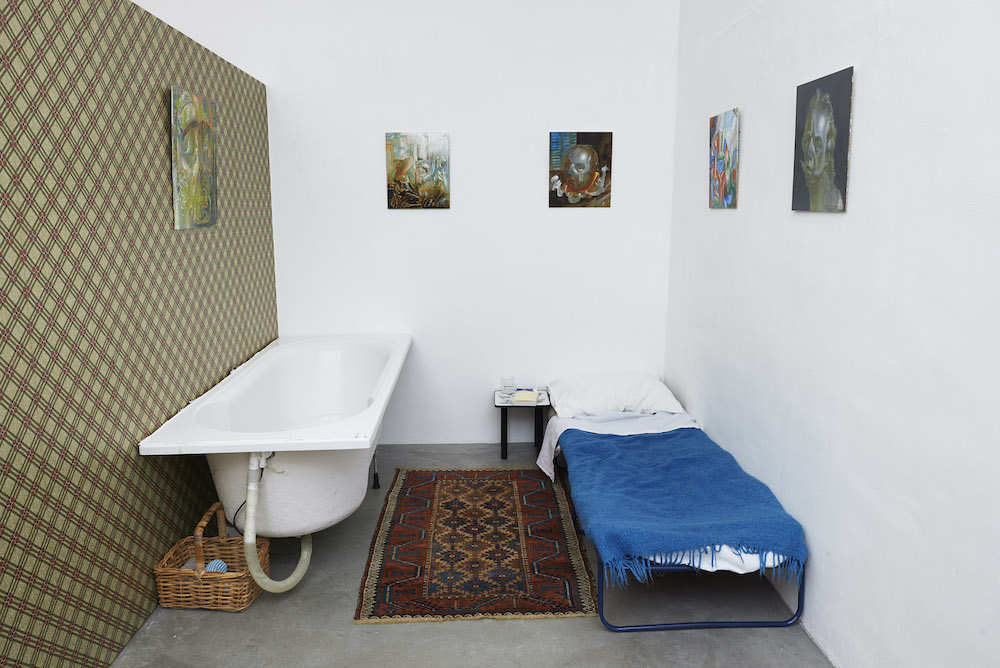 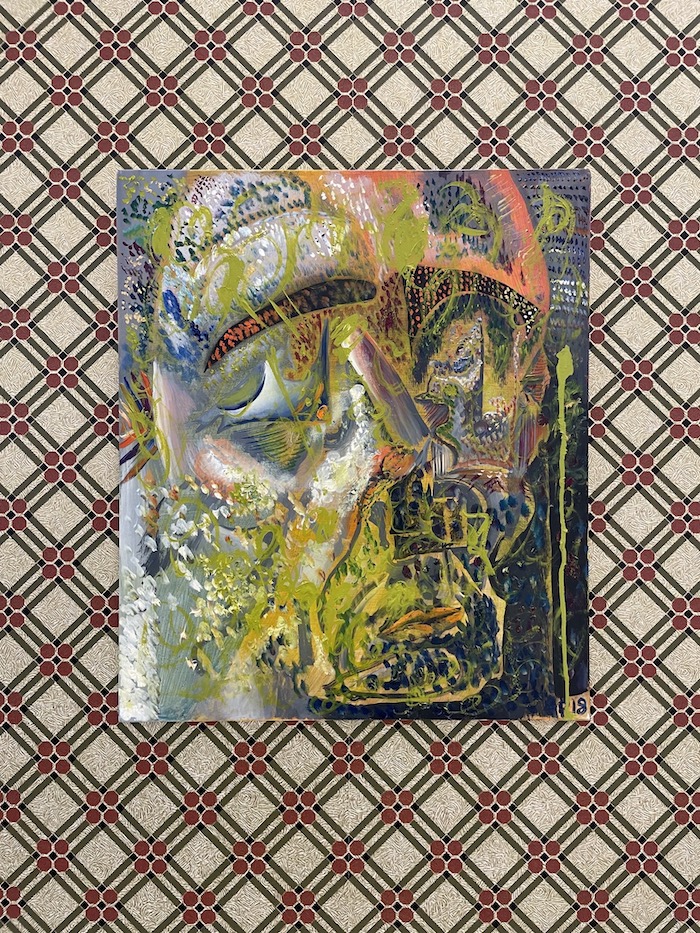 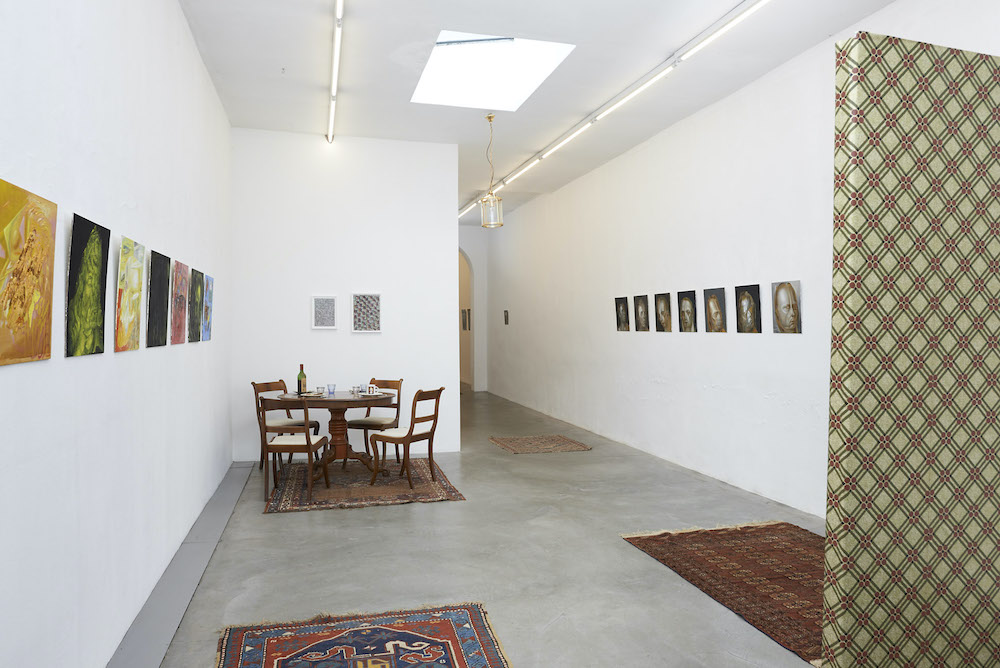 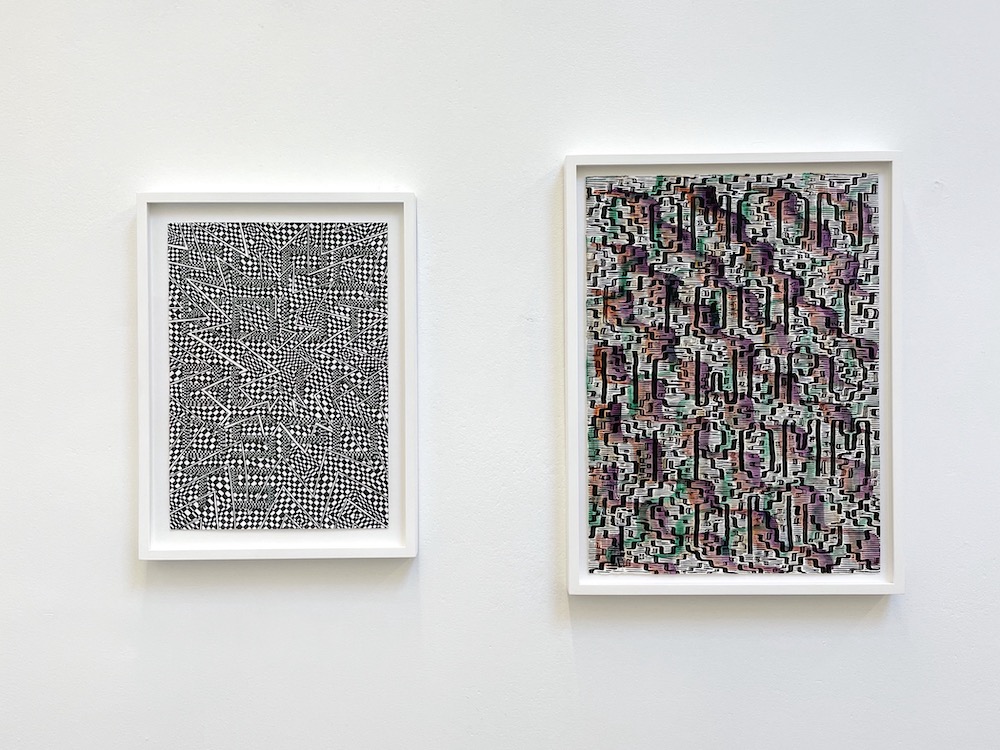 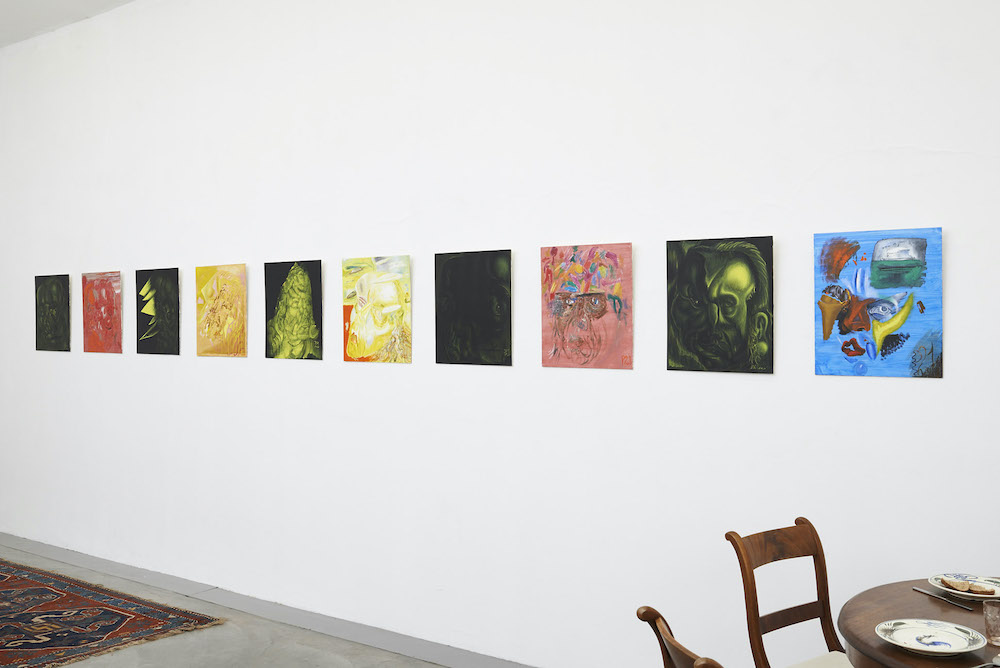 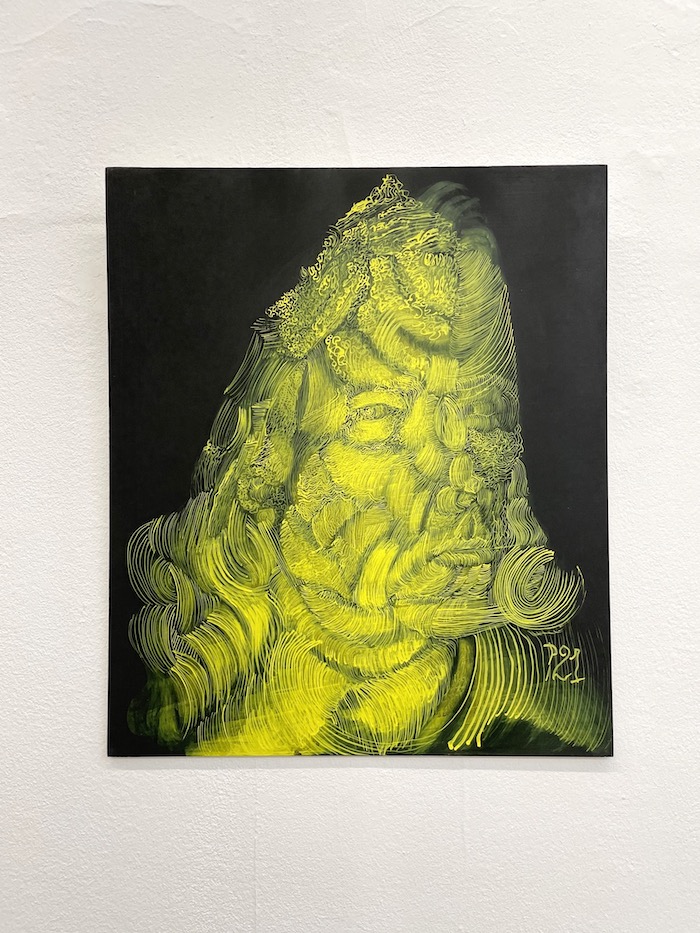 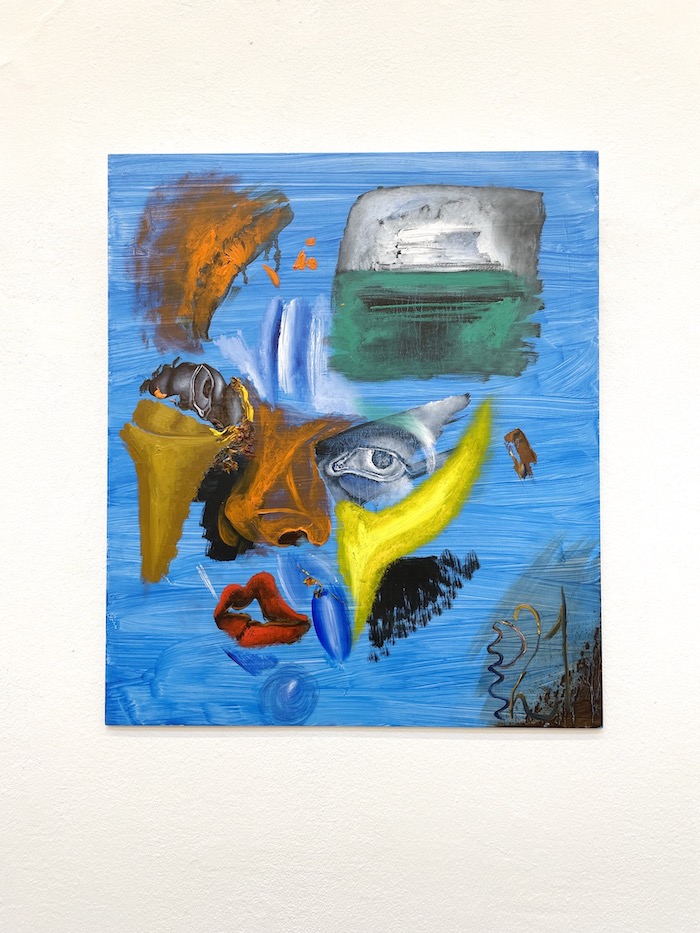 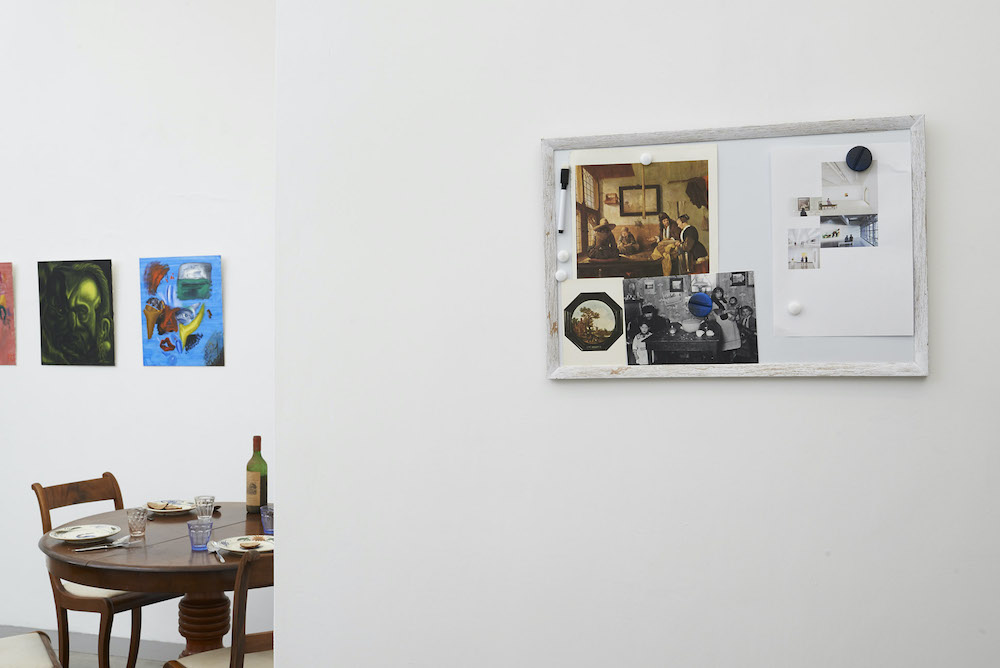 There are a few aspects of Philip Akkerman's practice that one could consider traditional and according to his latest solo presentation that opened on September 4th at Torch Gallery in Amsterdam, gallery shows aren't one of them. With a show entitled Van Een Gek, Voor Een Gek (From One Fool to Another), Den Hague-based painter once again showed his genuine humble spirit by transforming the gallery's white cube interior into a home-like setting and introducing his latest selection of recent self-portraits in such an inviting environment.

The entire concept of the show which brings art to a more relatable, everyday human position, was inspired by a black and white photograph of a rental house in the Jewish quarter in Amsterdam from 1916. Showing a working-class family in a barren apartment surrounded with only a few belongings, the stand-out elements of the scene are the artworks hanging above their small dining table. This image points out the strong and very unique Dutch tradition which existed since the 17th century onwards (similar practice existed only in Japan at the same time), to have artworks as a prominent part of many interiors regardless of the social or economic status. Influenced by that, Akkerman and his wife had their first art space/gallery in their home back in the 80s and a few decades later, after many museum presentations, the artist wanted to recreate the same ambiance for this presentation. And although having a good, yet the somewhat troubled relationship with the institutions that seem to be reserved for ownership and presentation of certain works, this exhibition confirms his belief that "any painting looks better in a living room than in the sterile context of a museum."

Akkerman has been painting exclusively self-portraits since 1981 and this presentation includes some 20-ish examples painted in the past couple of years. Varying in their aesthetic, technical, compositional, tonal, and any other approach, this selection gives a pretty good overview of the extent of his seemingly hyper-limited practice. By exploring the human form through his brushwork, color choice, light and shadow play, utilization of the format and the composition, he is both documenting the development of his practice as well as the various stages of his life. Showcased both through the change of his own physical features, and even more through the change of his artistic interests and approaches, this unique convention continuously adds to one of the most incomparable, consistent, yet surprisingly eclectic oeuvres out there. And an example of this ongoing energy that keeps pushing his practice could be two works framed in vintage golden frames. Usually determined to present his works raw, as they are created in his studio, the home setting and the combination with wallpaper prompted the artist to experiment with this new direction. Shifting the appeal of the image and adding a sense of restriction and dynamics between the large portrait and heavy frame, Akkerman might have just introduced the next chapter with this showcase.