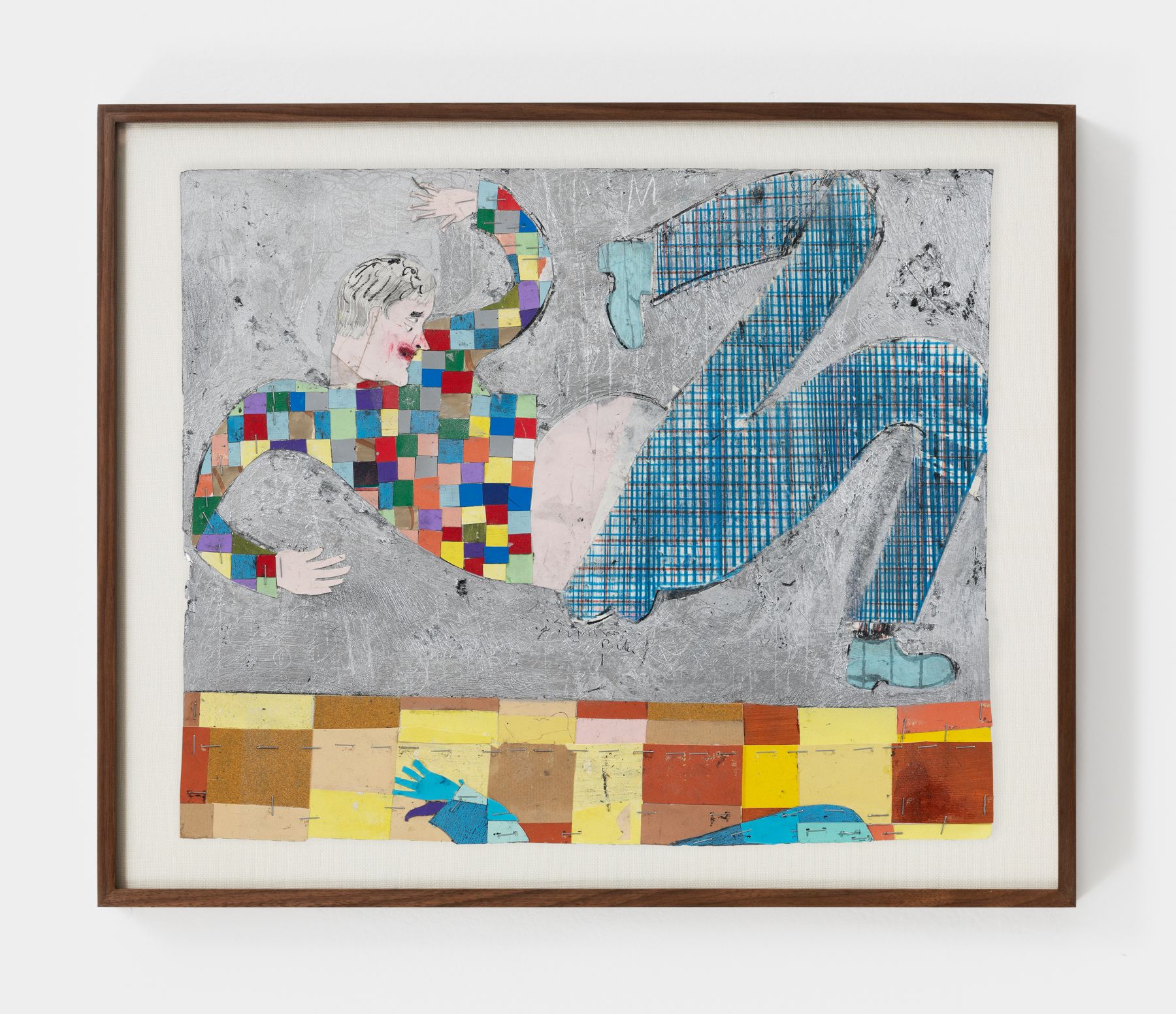 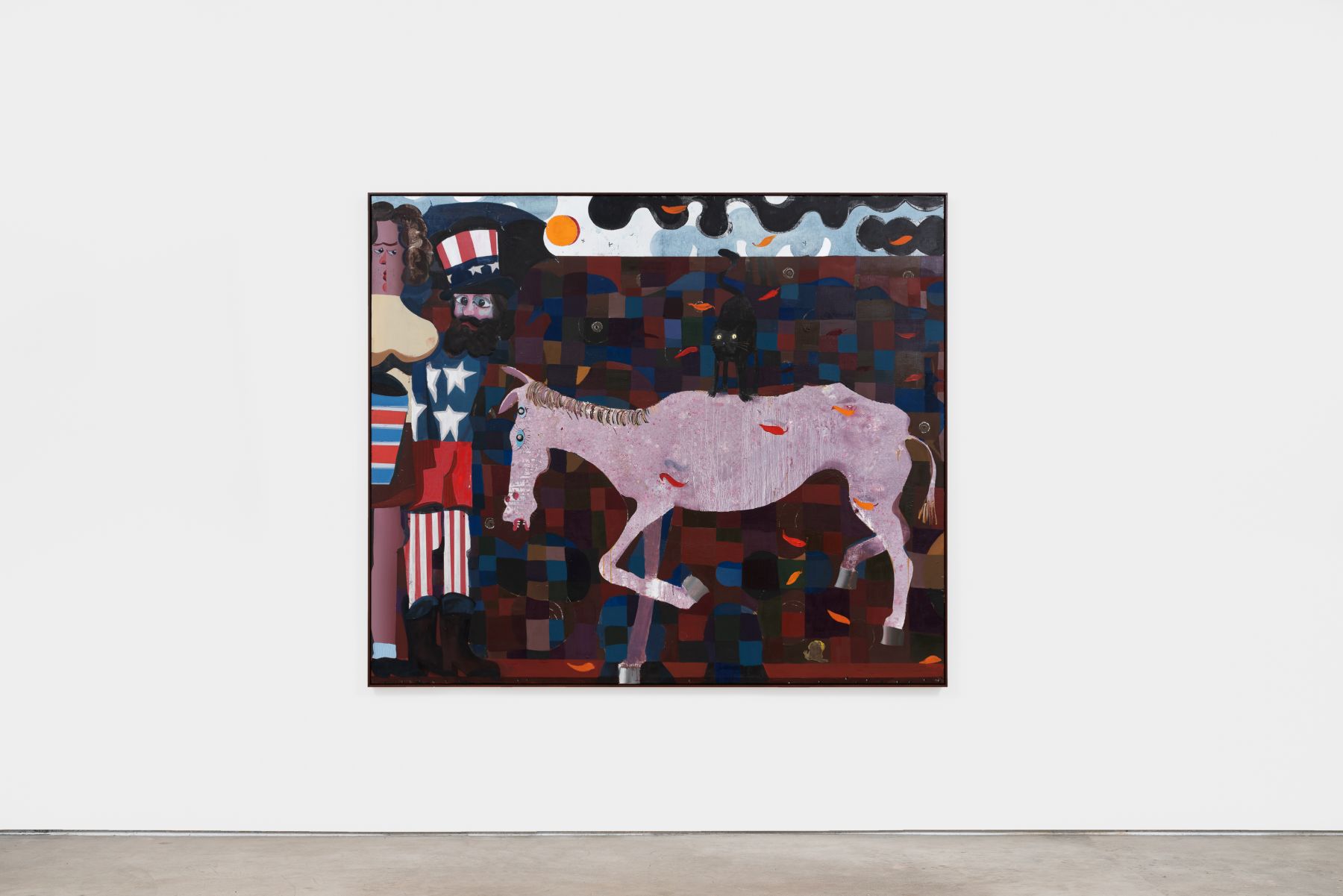 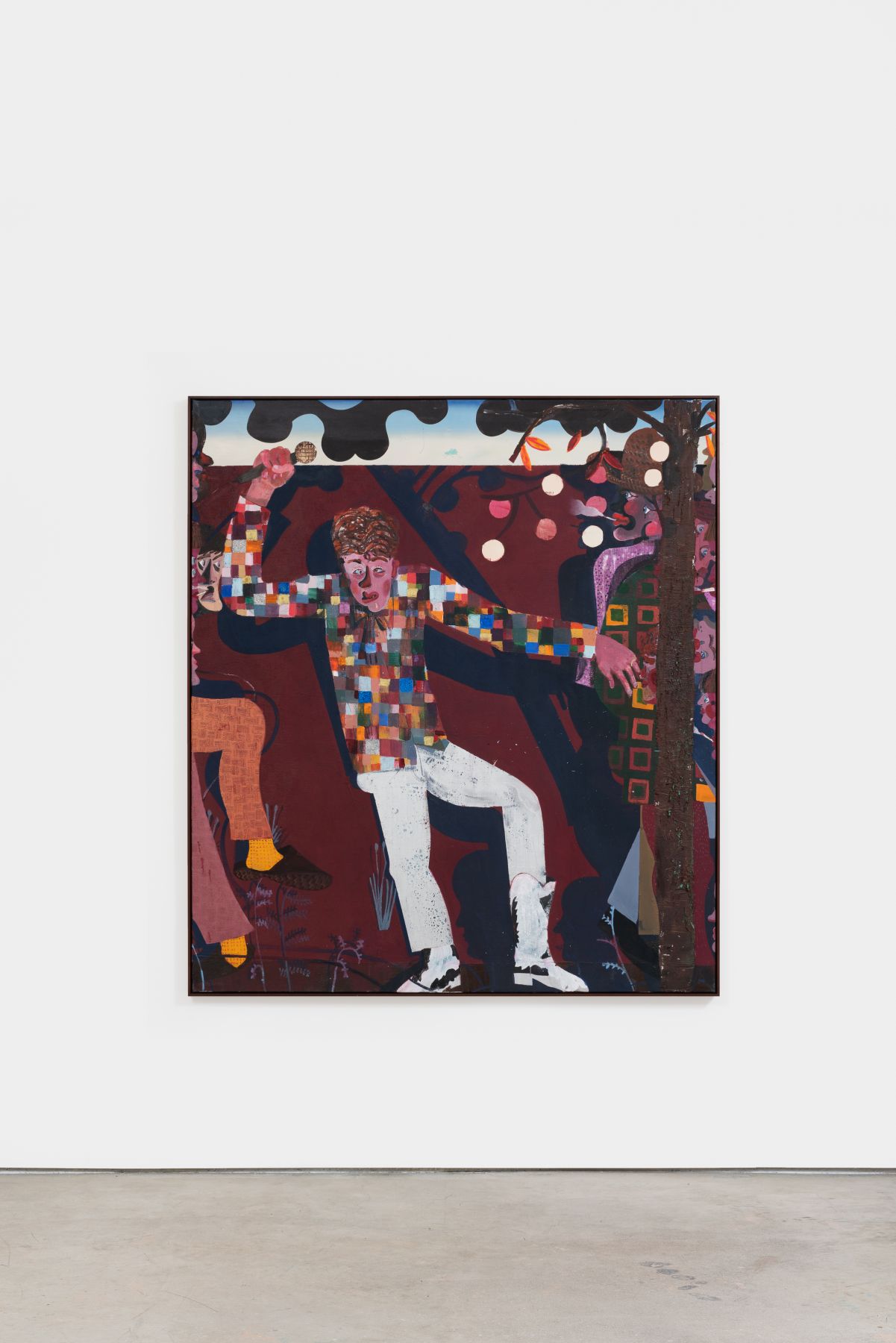 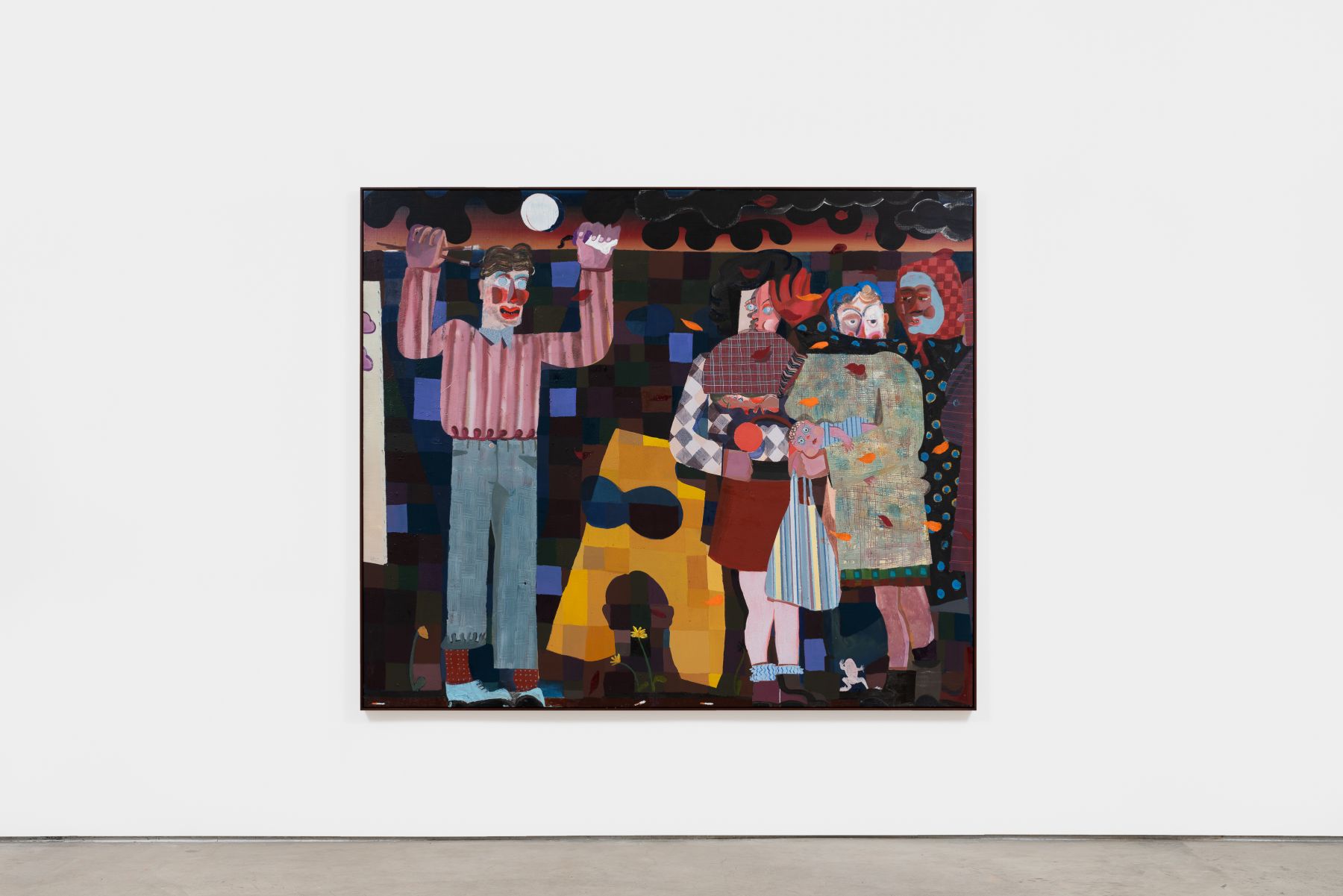 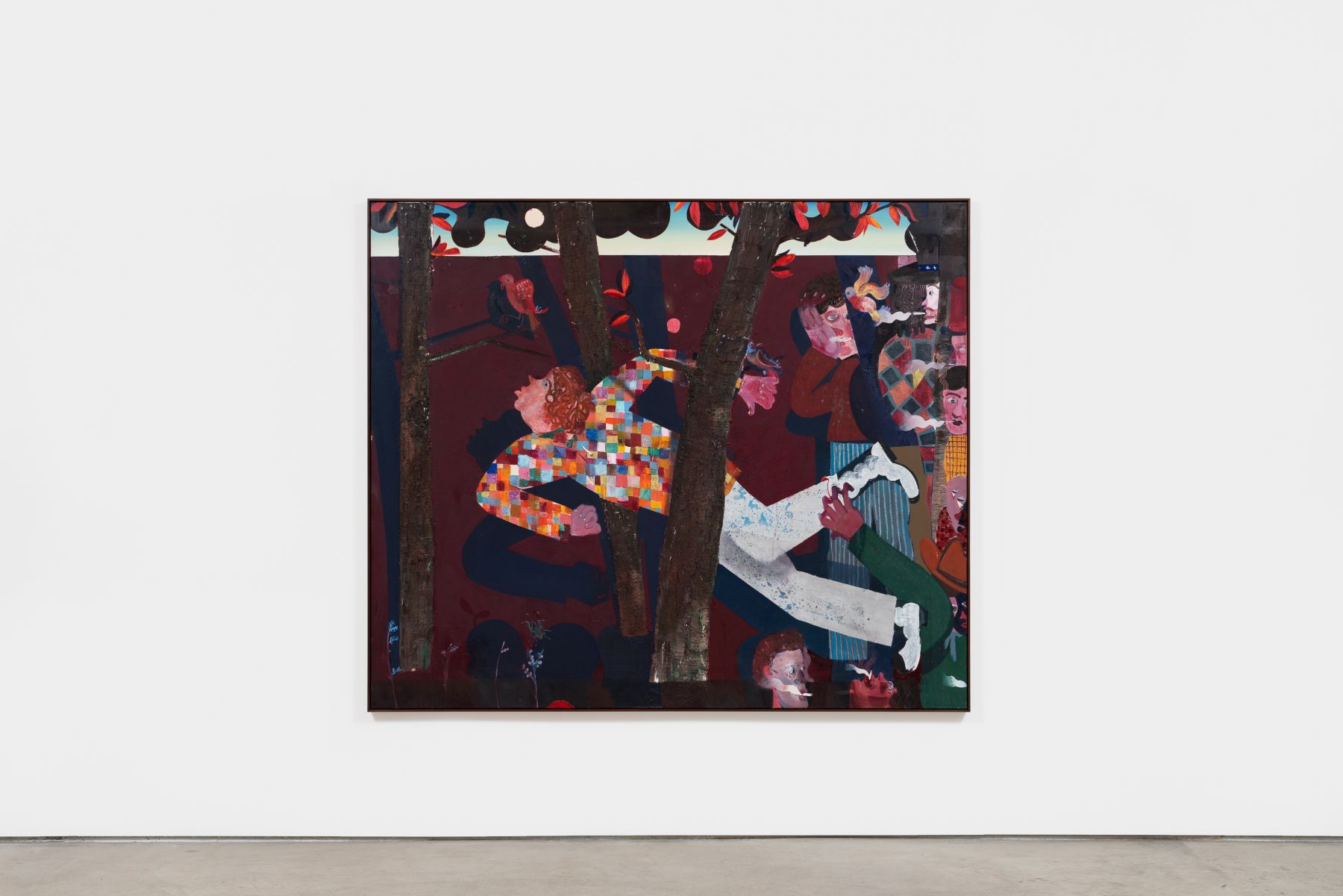 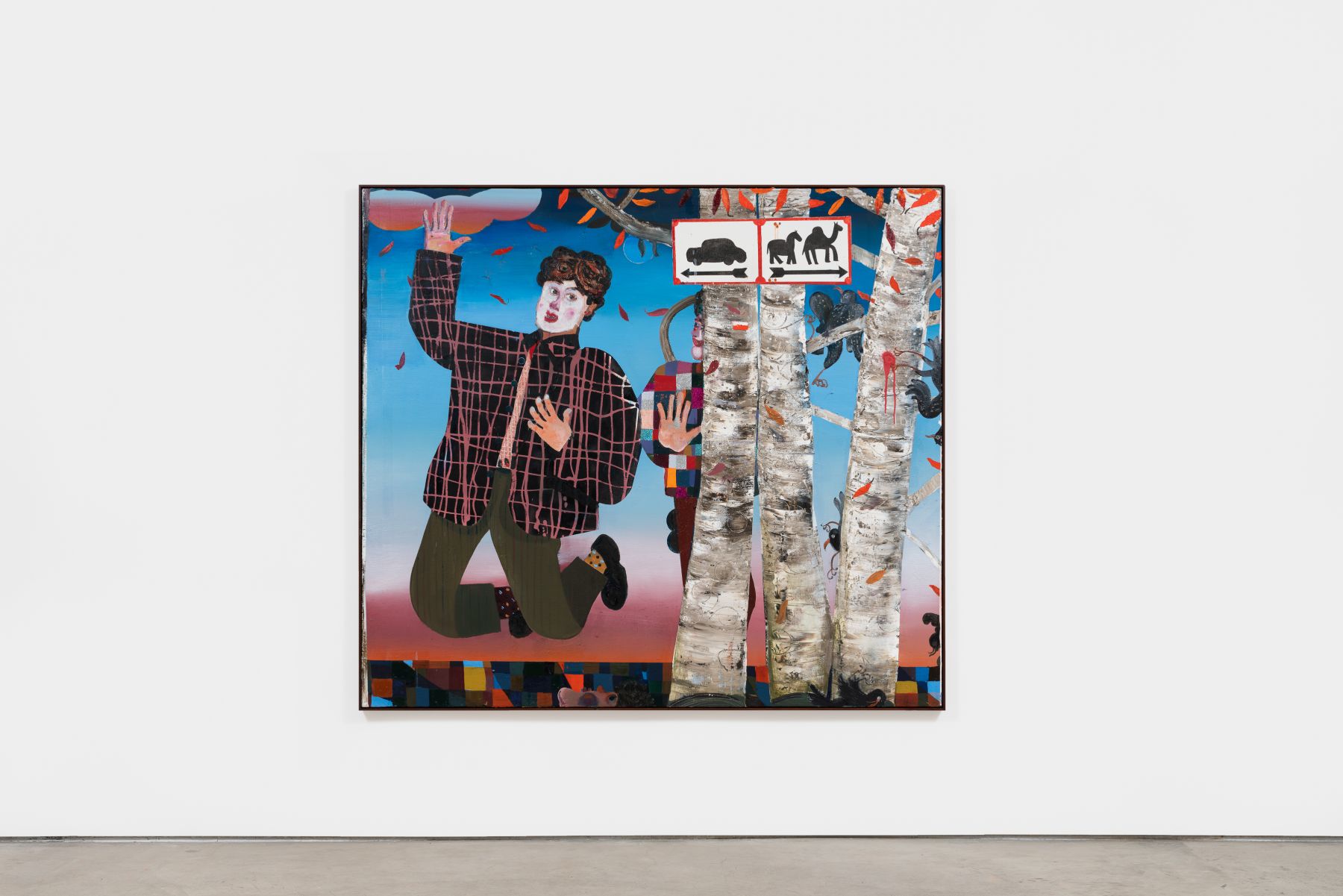 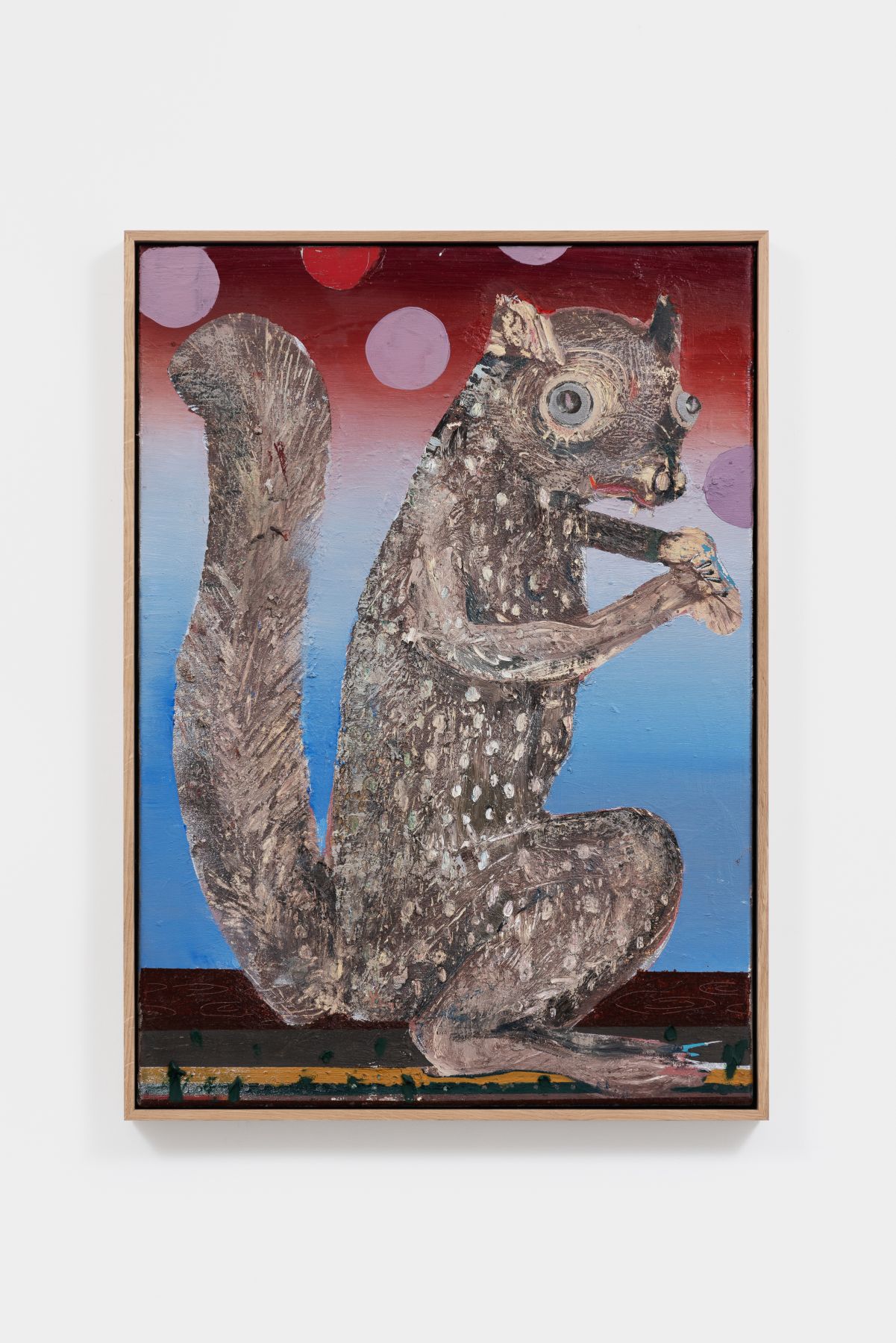 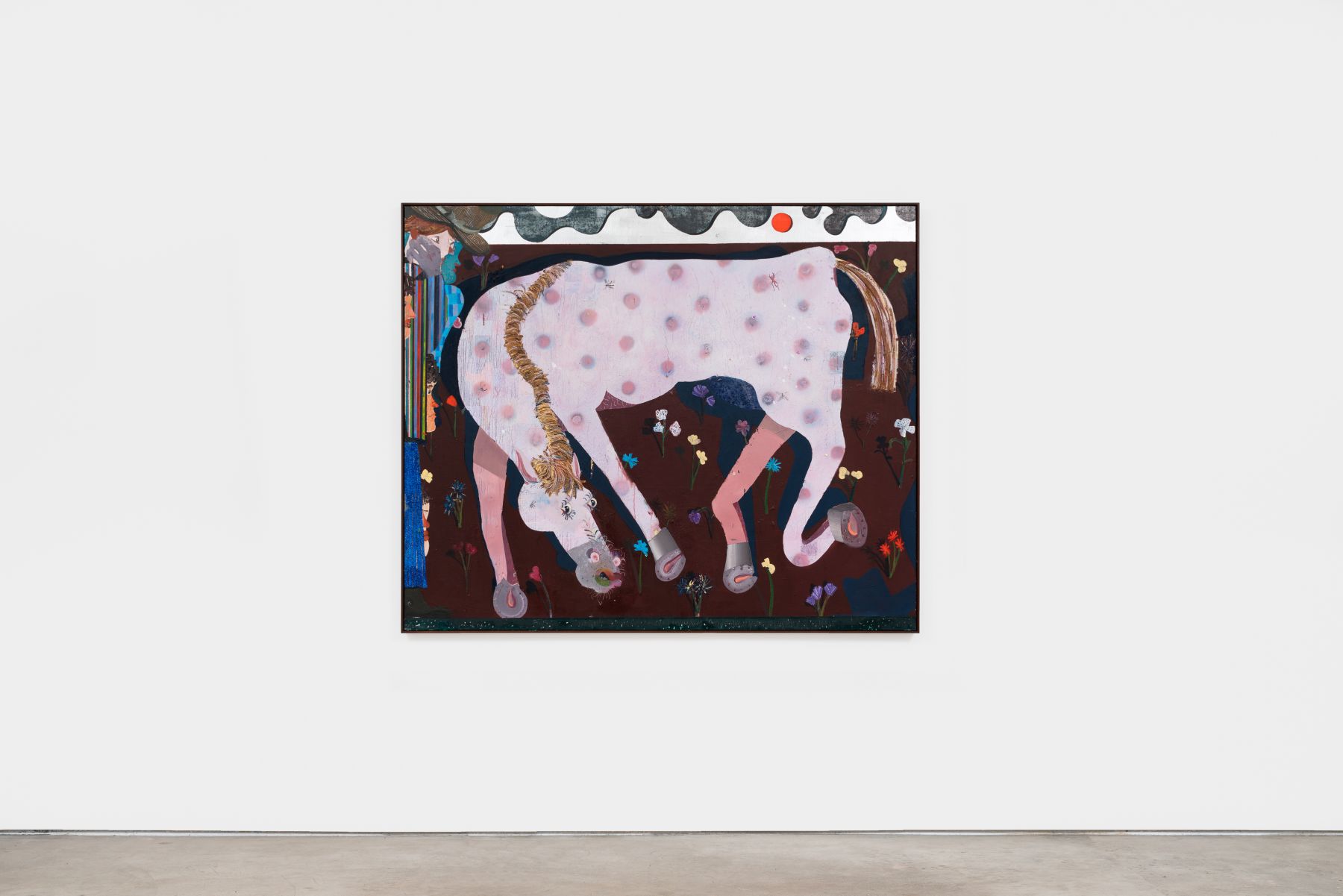 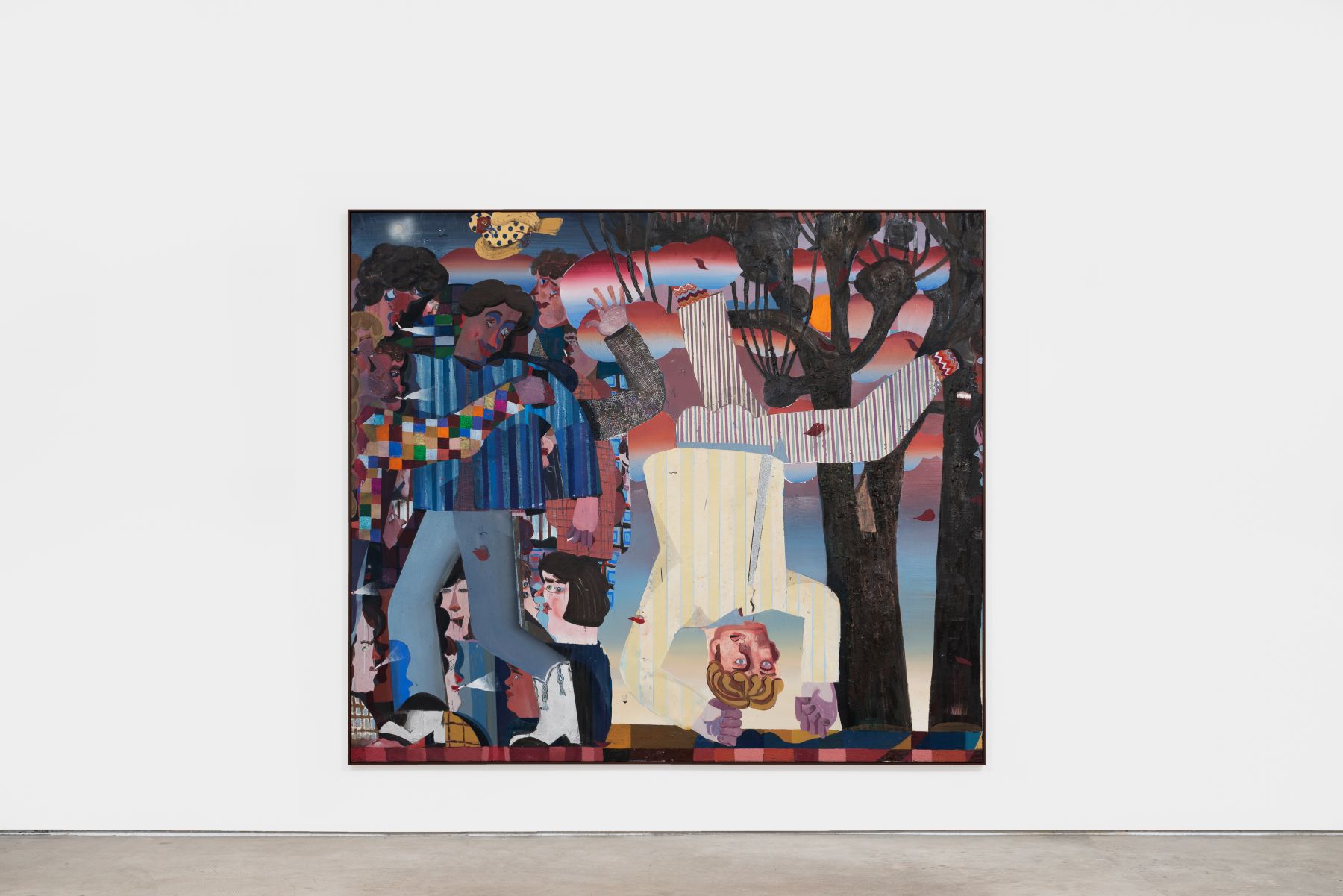 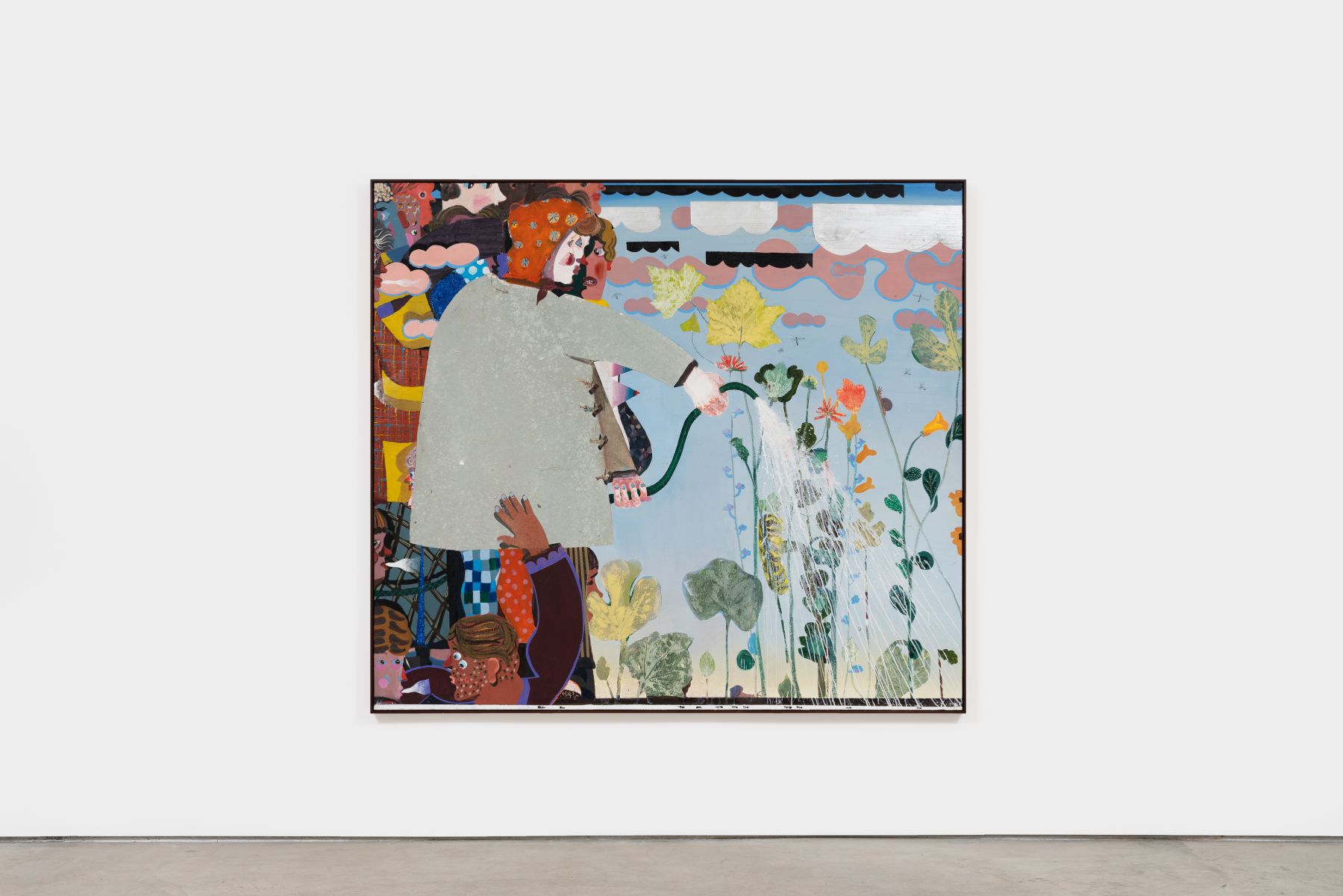 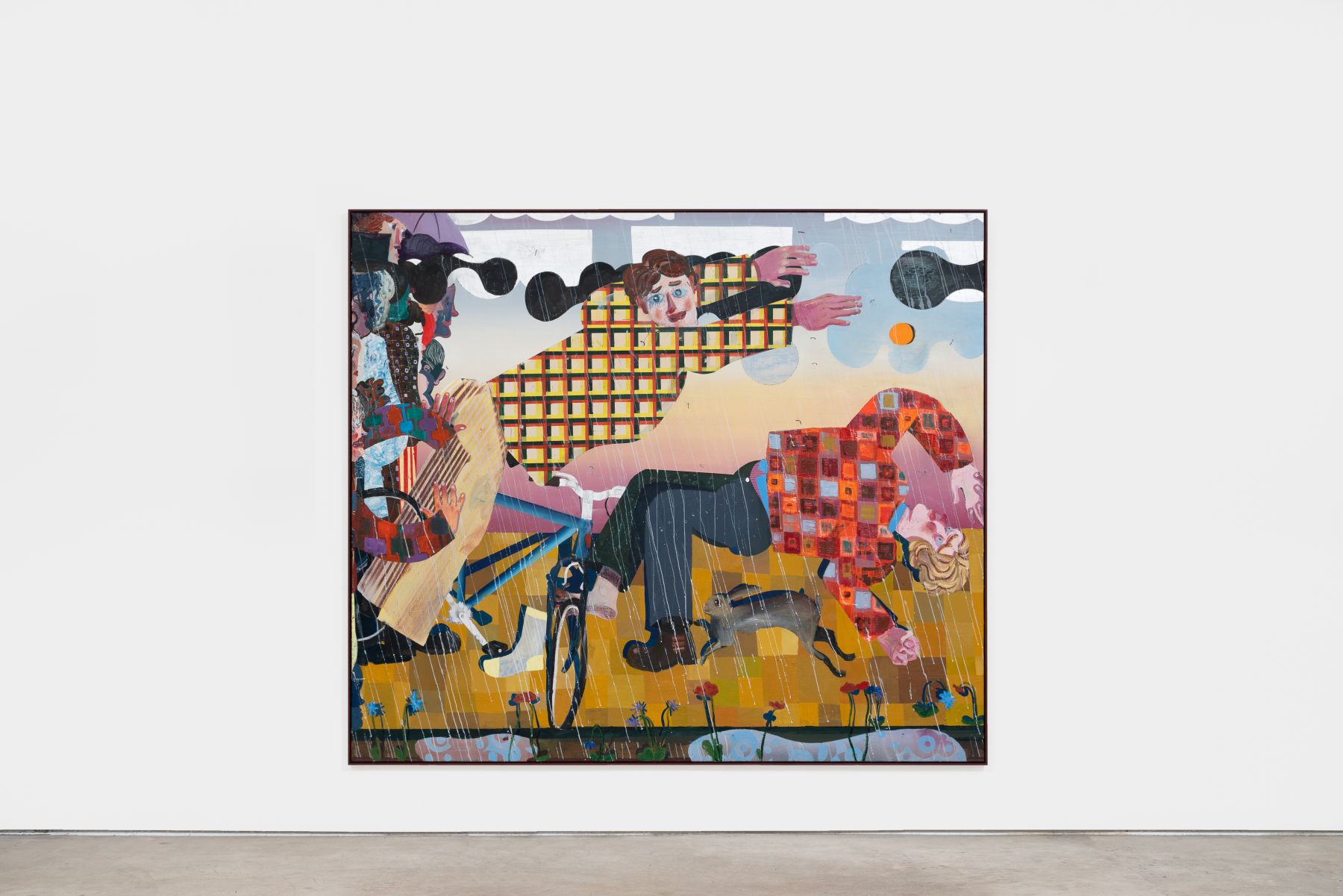 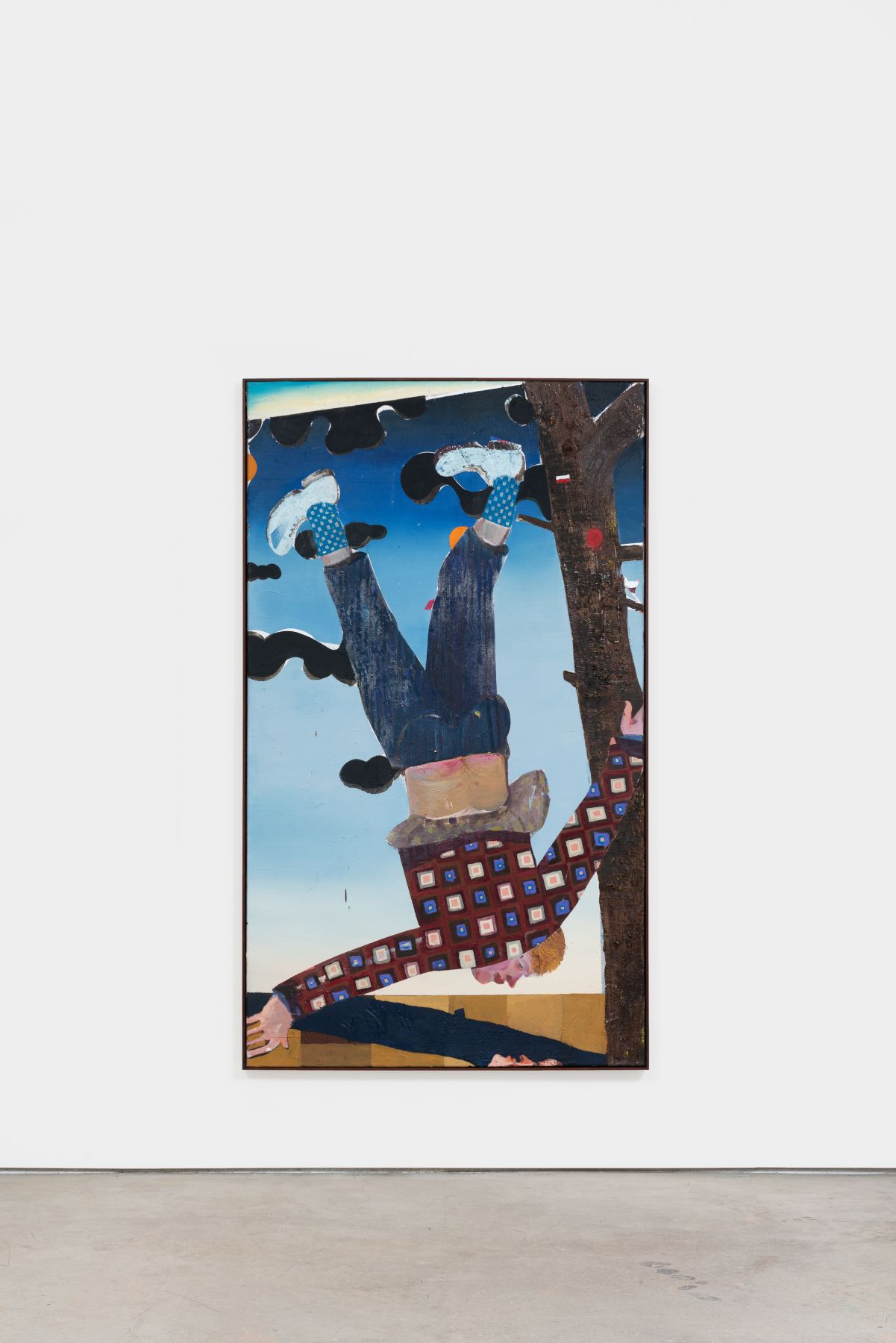 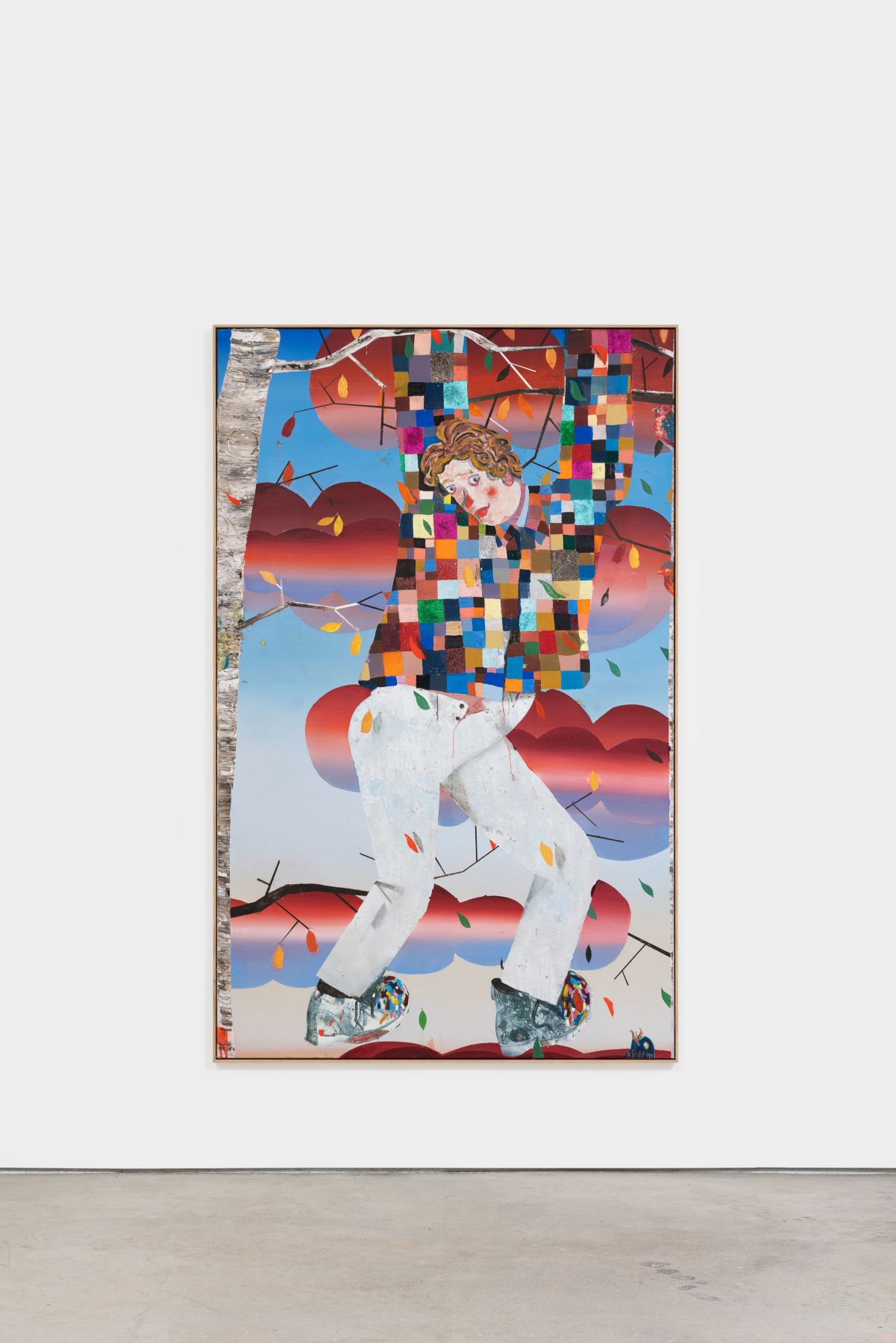 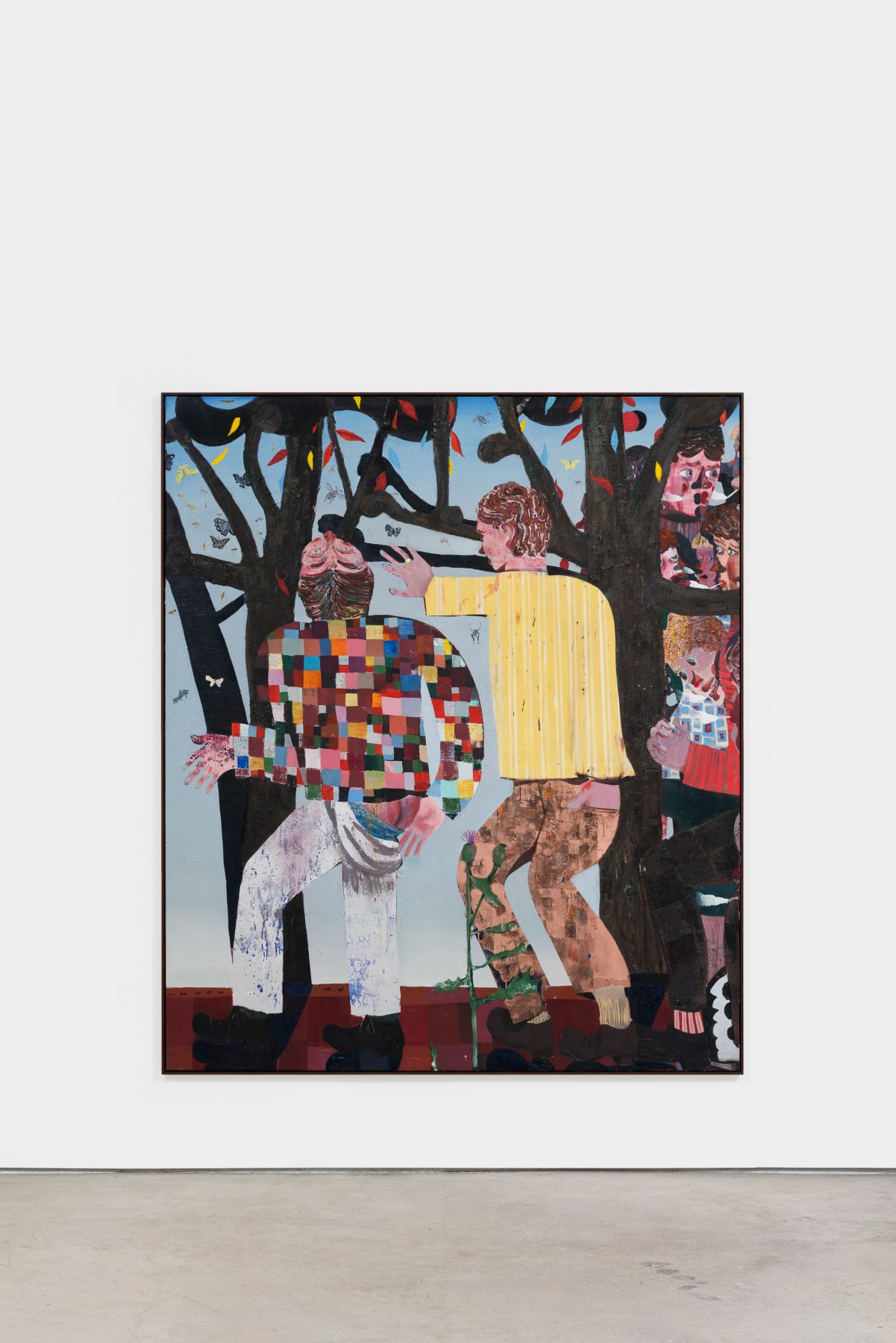 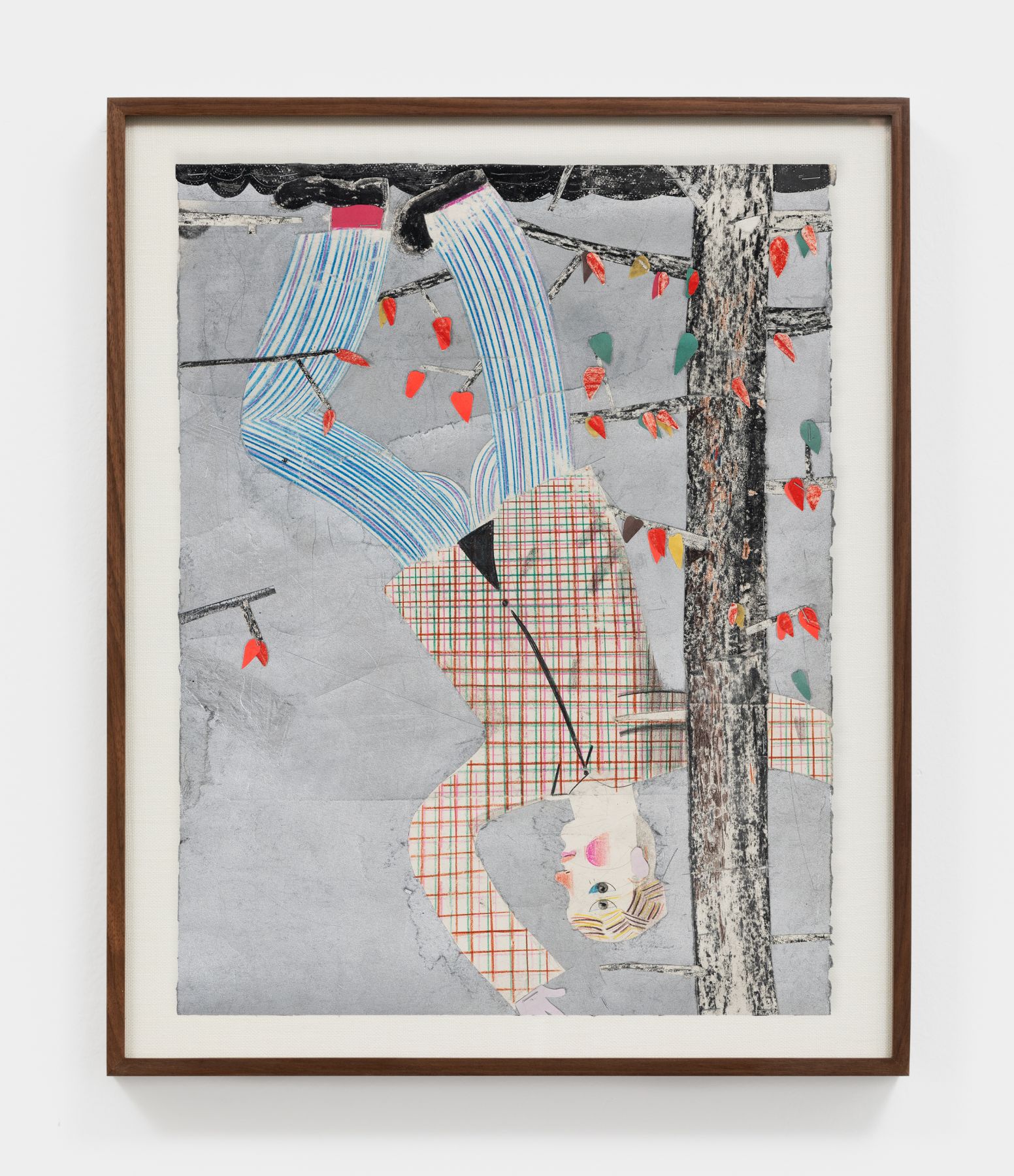 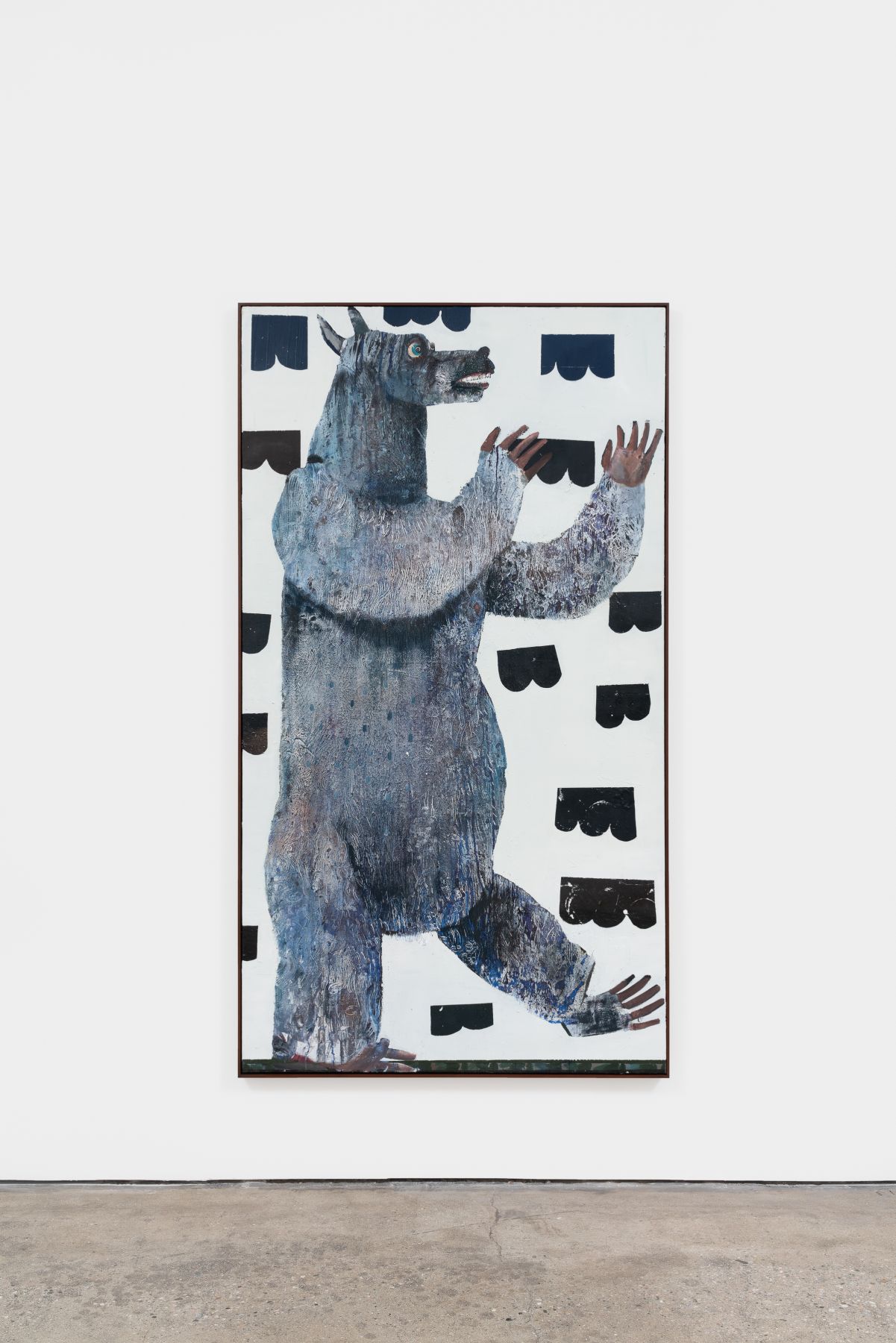 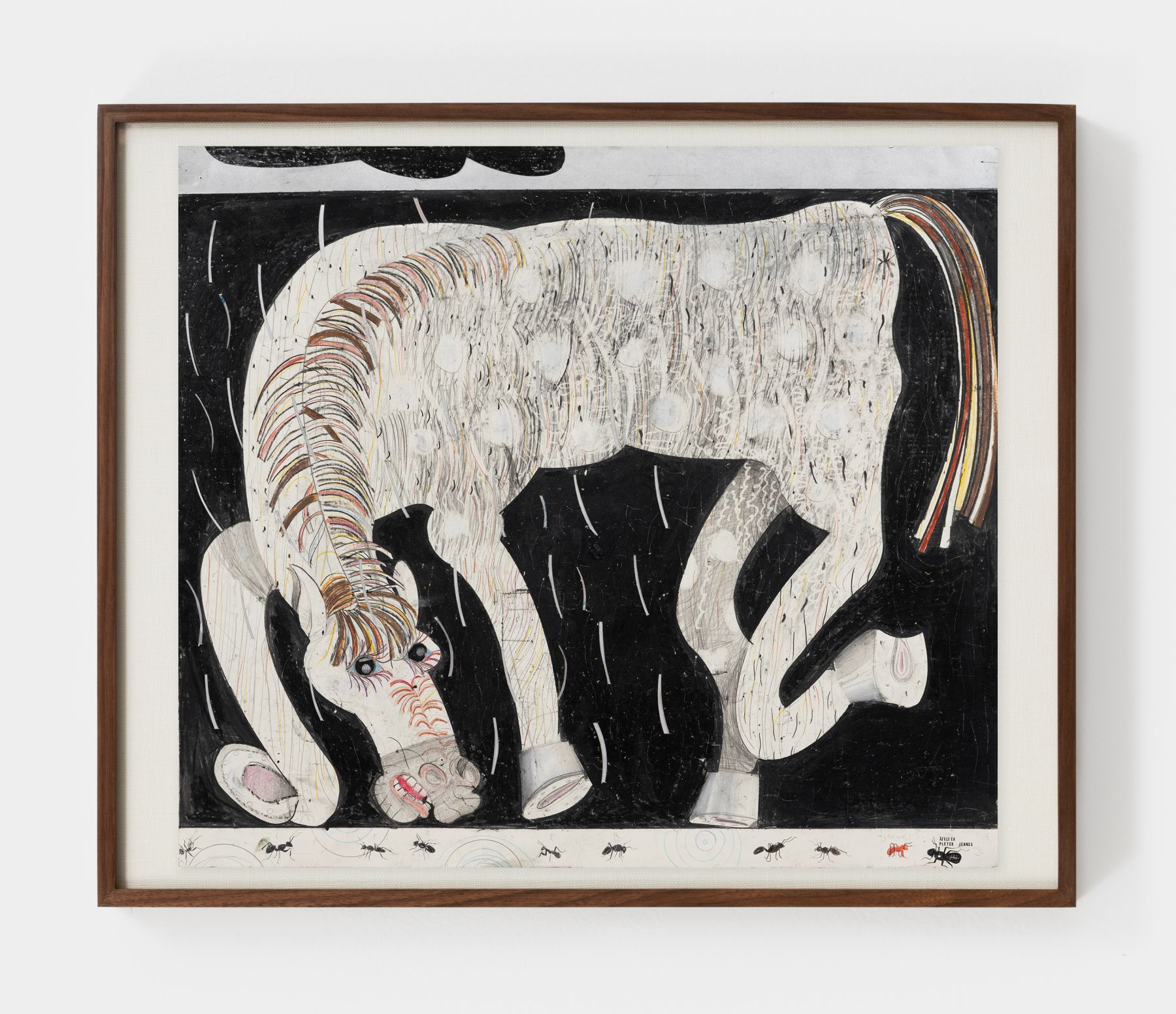 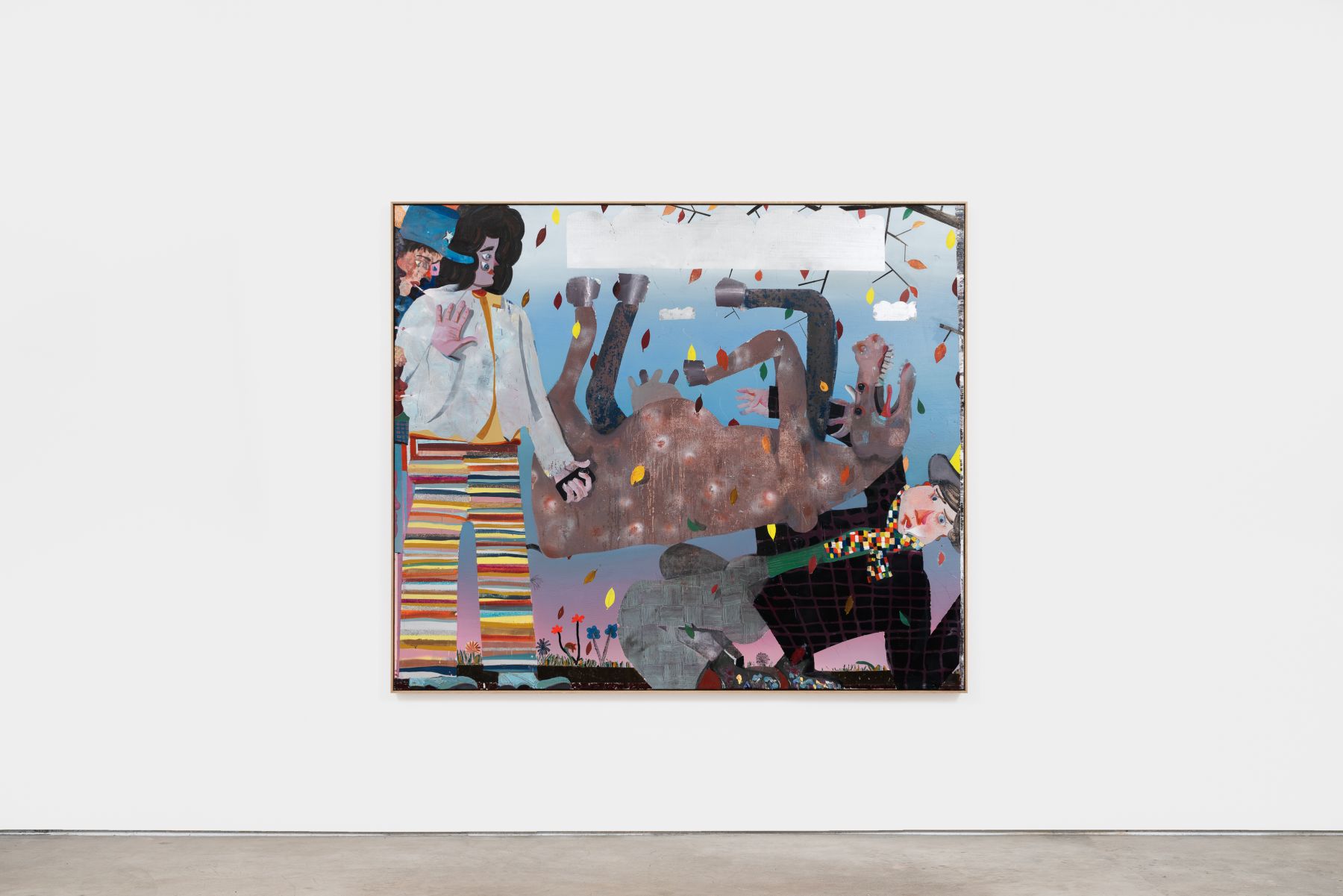 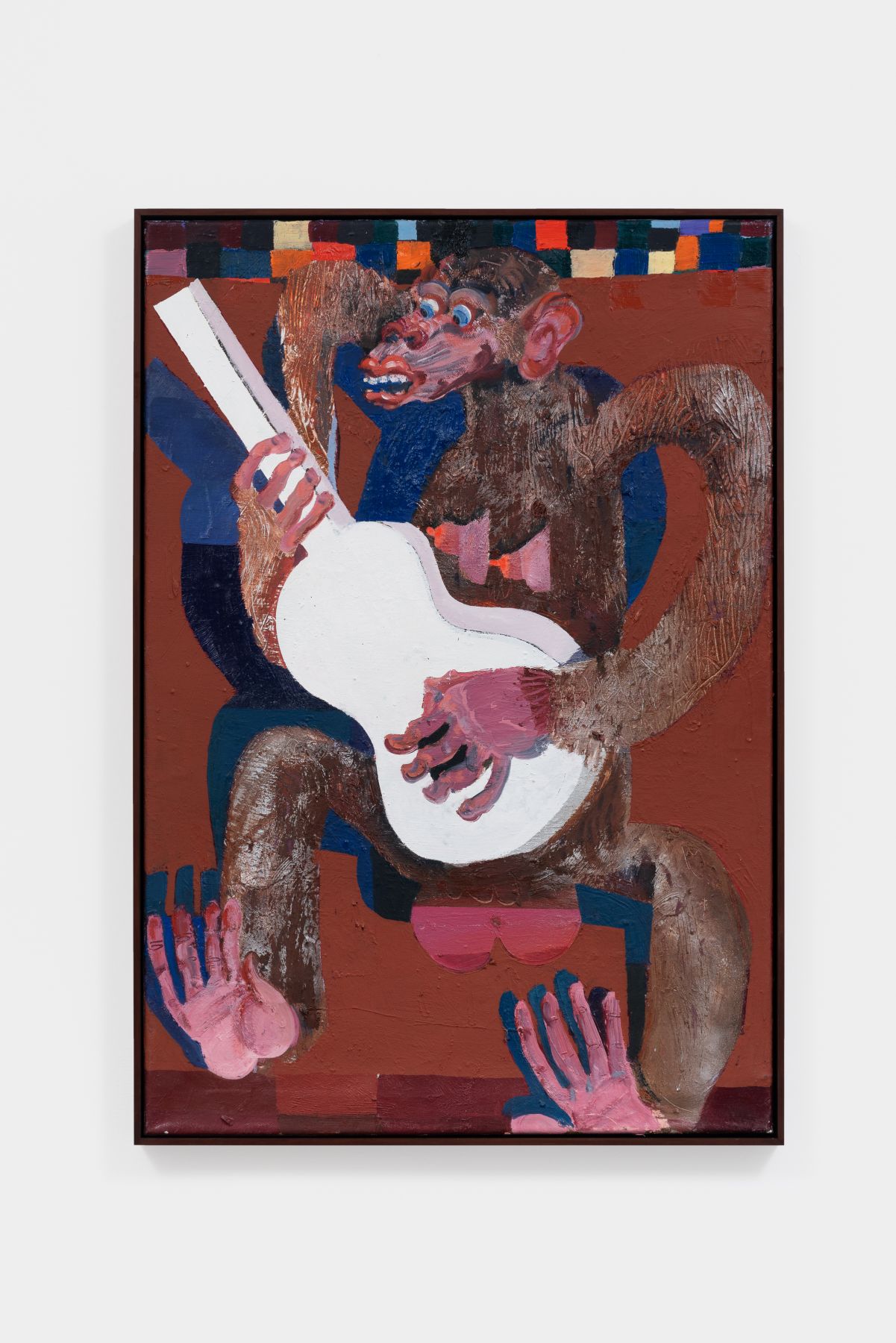 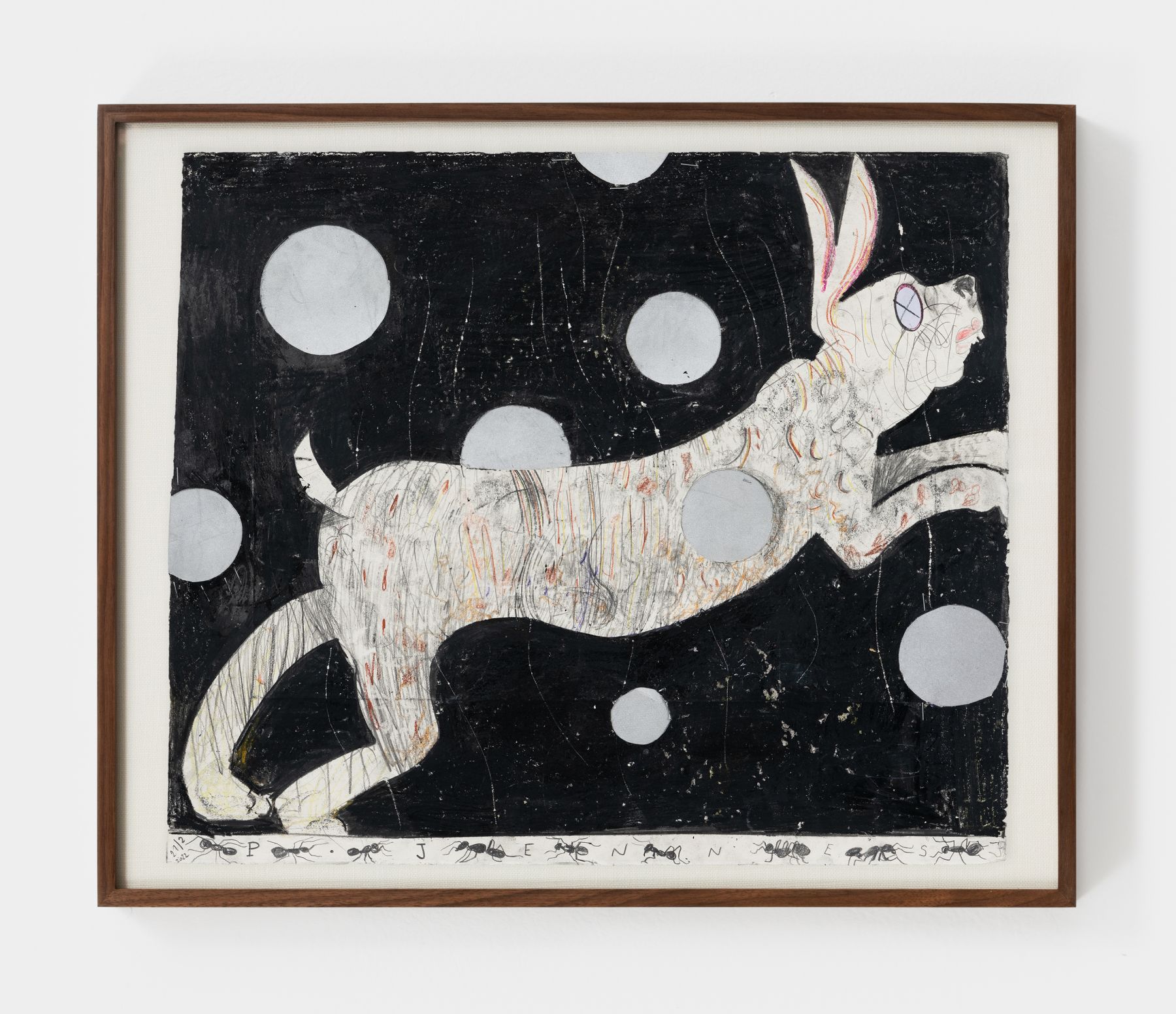 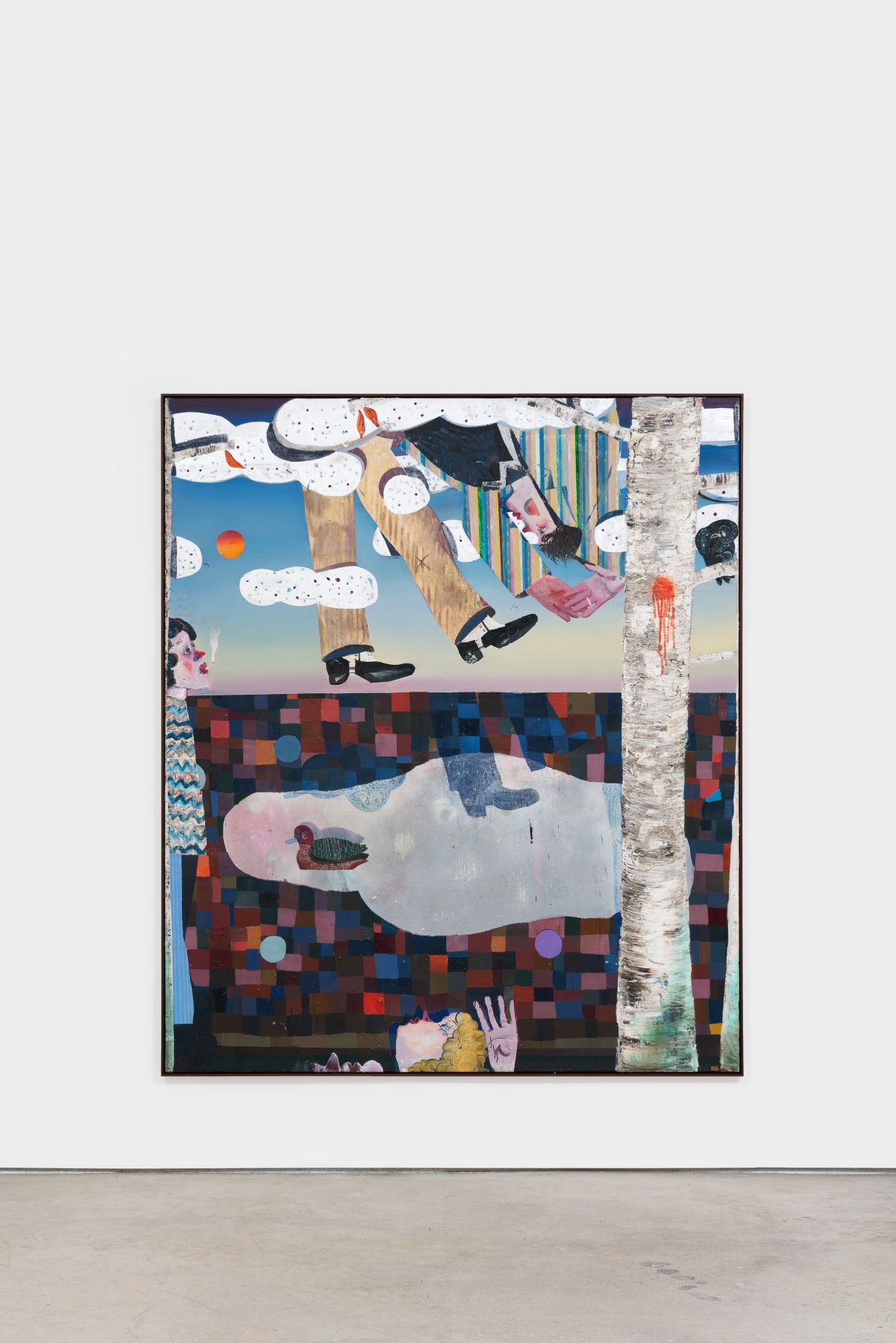 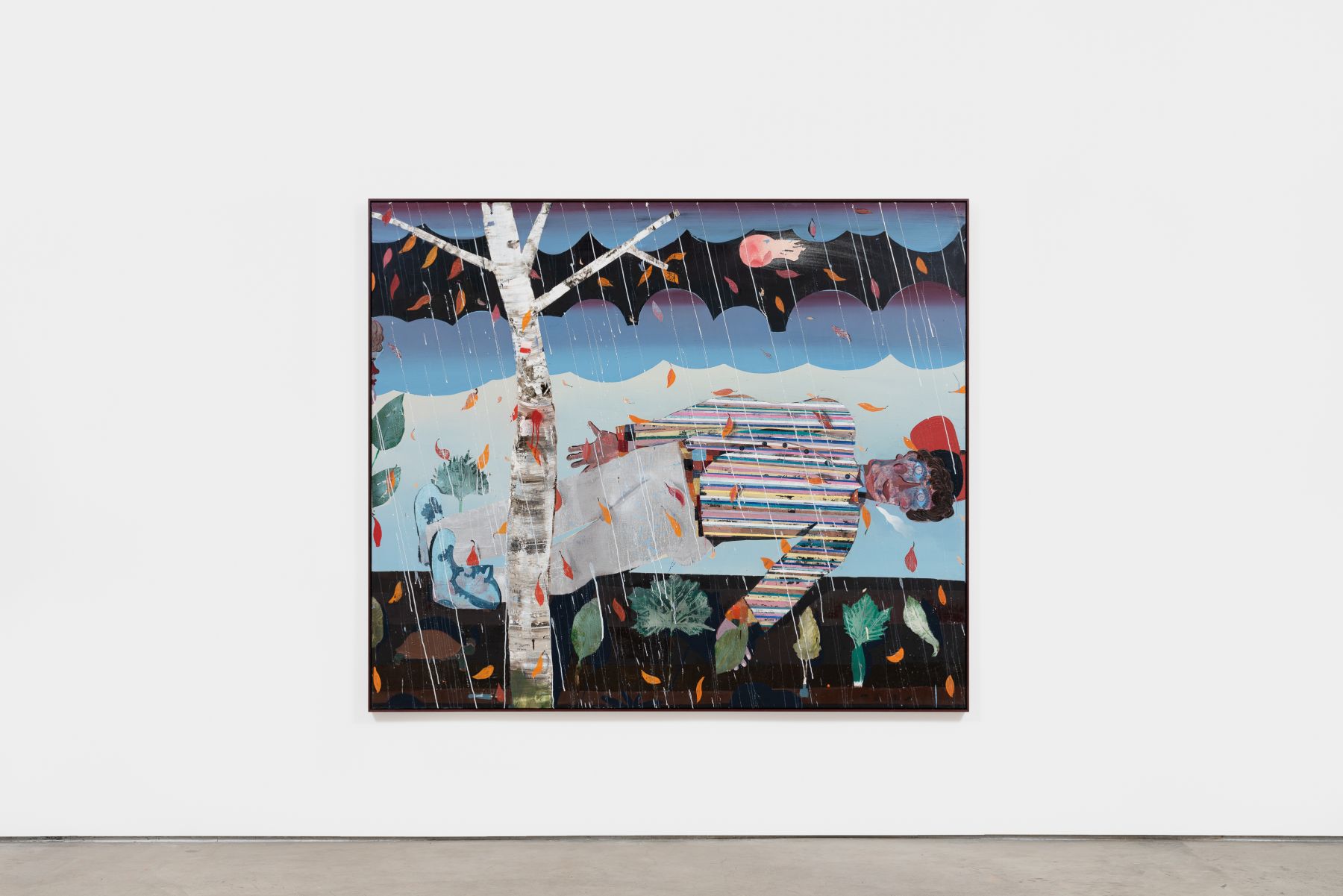 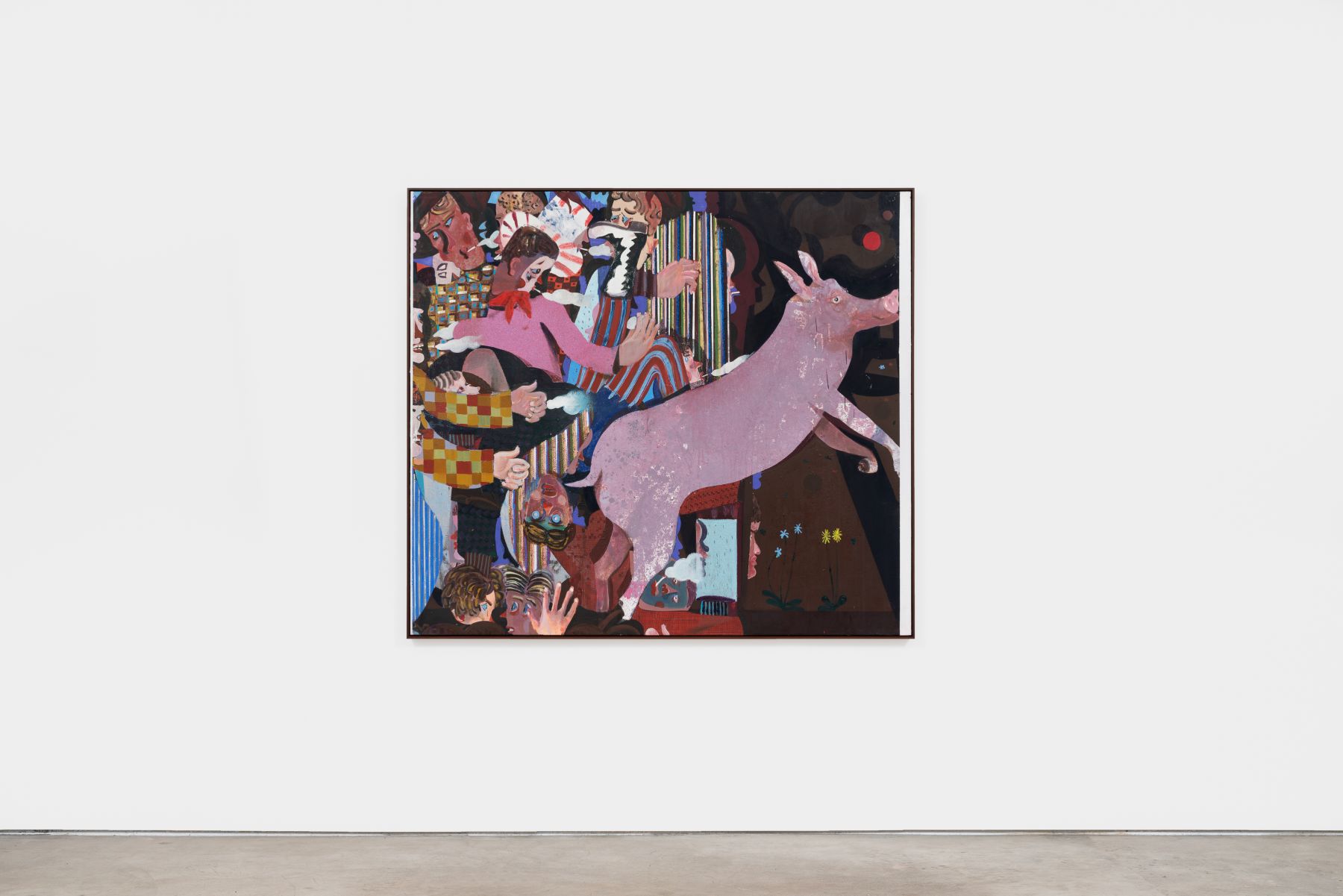 Last year in Antwerp, where Jennes currently lives and works, a social scene burgeoned outside the city center. Because the pandemic forced the closure of many public gathering spots, people began congregating in the woods, where land was still public. Jennes describes an invigorating mix of desperation and glee, as people would gather in freezing temperatures to drink, chat, and dance within an almost laughably harsh landscape. In When Weeds Bloom, Jennes represents some of the spirit of these gatherings, harnessing the shock, humor, and antiauthoritarianism that characterizes the carnivalesque.

Many of Jennes’ slapstick compositions are divided in two, albeit unequal parts: one part contains a figure (or two) falling, while the other depicts a small huddle of figures with mask or doll-like faces staring at the display of gracelessness before them. Crowds of clustered people have been, for the better part of the past two years, a taboo. But in Jennes’ paintings, what is dangerous is also what is life-affirming. His men and beasts point to the self-deprecating comedy that is so often a reprieve from the depths of despair, loneliness, and fear. In why and How? … nobody will know, a cow inexplicably falls back-first onto an unsuspecting victim smoking a cigarette. Indeed: why, and how? We look to Jennes’ other paintings for answers, but they respond only with beguiling, clownish revelry.

The exhibition captures its cast of human and animal characters mid-gesture within theatrically flat outdoor settings. Jennes foregoes clear delineations between foreground and background, placing horizon lines close to the canvases’ lower edge, and eschewing naturalistic perspective. Depth instead is articulated in Jennes’ surfaces, which are worked palimpsests of rich oil paint. Much of the texture, pattern, and even emotion (his trees are filled with lovers’ inscriptions) displayed in the works is achieved through his painstaking manipulation of matter and form.

The flattened compositions in When weeds bloom resemble stages, revealing Jennes’ interest in the dynamics between performance and observation. In I like life a lot, a figure topples headfirst into the grass while his dancing compatriots observe with warm smiles. In I’m scared my toes are blue, a man on an overturned bike pushes a friend to the ground. A dense mass of characters gather at the painting’s margin, watching the scene with intrigue. The strangeness of being perceived takes on an explicitly surreal tone in where have you fallen, have you fallen? The painting depicts a man falling headfirst from a tree. He is inches away from the ground, but instead of grass we catch a glimpse of another face. Their gaze locks: the falling man has been caught. Unfortunately for him, his debauched fall will not be broken, only witnessed.

The relationship between actor and observer plays out not just between figures within the paintings, but also in the form and address of the exhibition as a whole. While the flattened space of each canvas might seem to push back on us, their installation reaches outward, inviting us into its sphere. Jennes’ forest surrounds us on all sides, and a suite of fifty metal frogs lies beneath our feet. The artist even offers us a place to sit and stay a while: he hand-crafted a bench, a table, and a set of chairs for the exhibition. The galleries, then, become Jennes’ expanded canvas, and we become members of his enchanted world.

The attitude and aesthetics of carnival are deeply entrenched within Jennes’ works, which find auspices in fellow-Belgian painter James Ensor’s kaleidoscopically grotesque compositions. Traditionally, Carnival serves as a suspension of social and political mores. Once masks and costumes are donned, the rules of polite society screech to a halt and citizens of any class are offered the chance to embody a more libertine identity with little consequence. While When Weeds Bloom—which features vagrants who drink, ogle, dance, sing, jump, and tumble amid thin-trunked trees—does not overtly reference the celebration, its spirit is apparent in the style and content of the work. Moreover, his paintings depict the risks we are willing to take in the name of festivity.