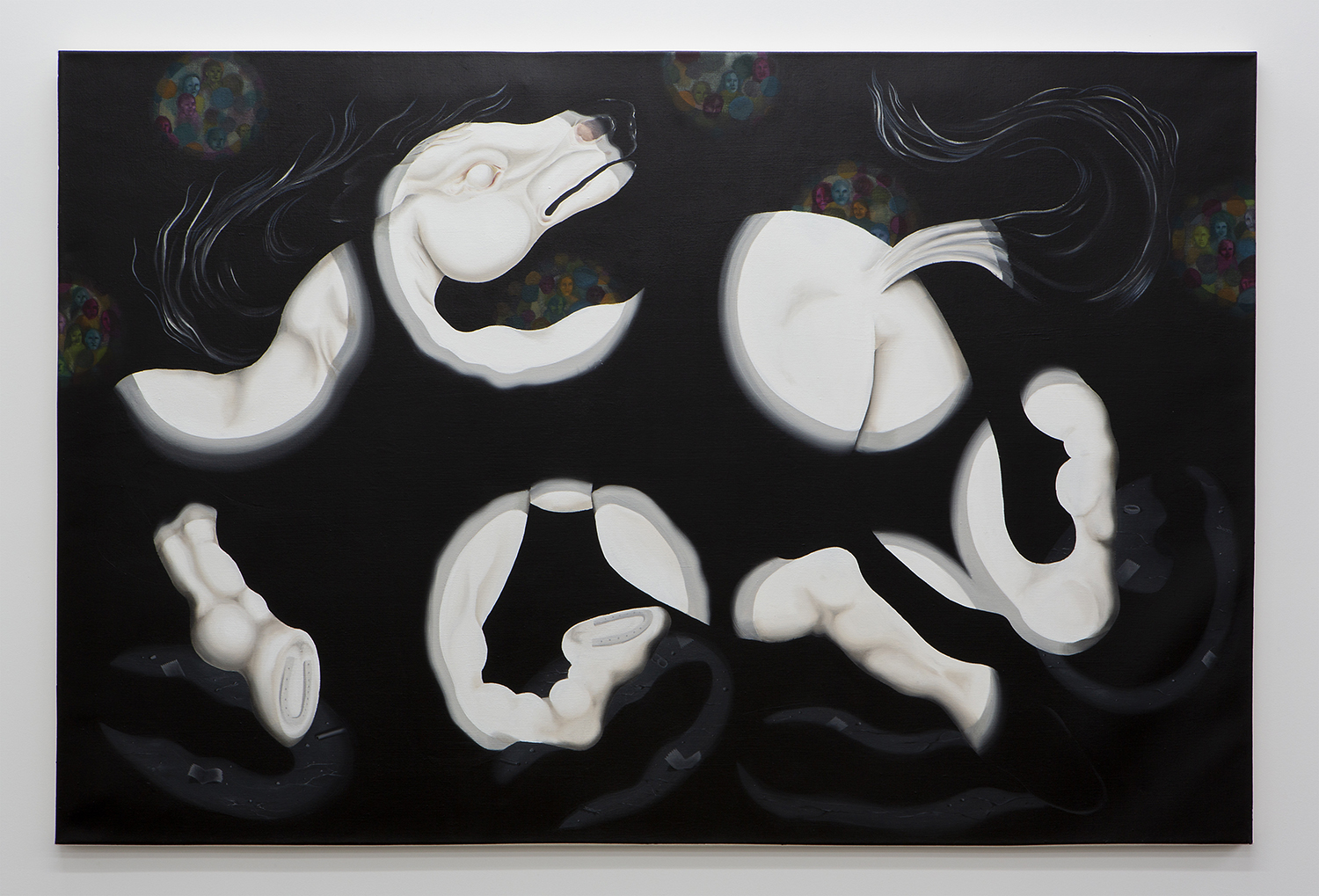 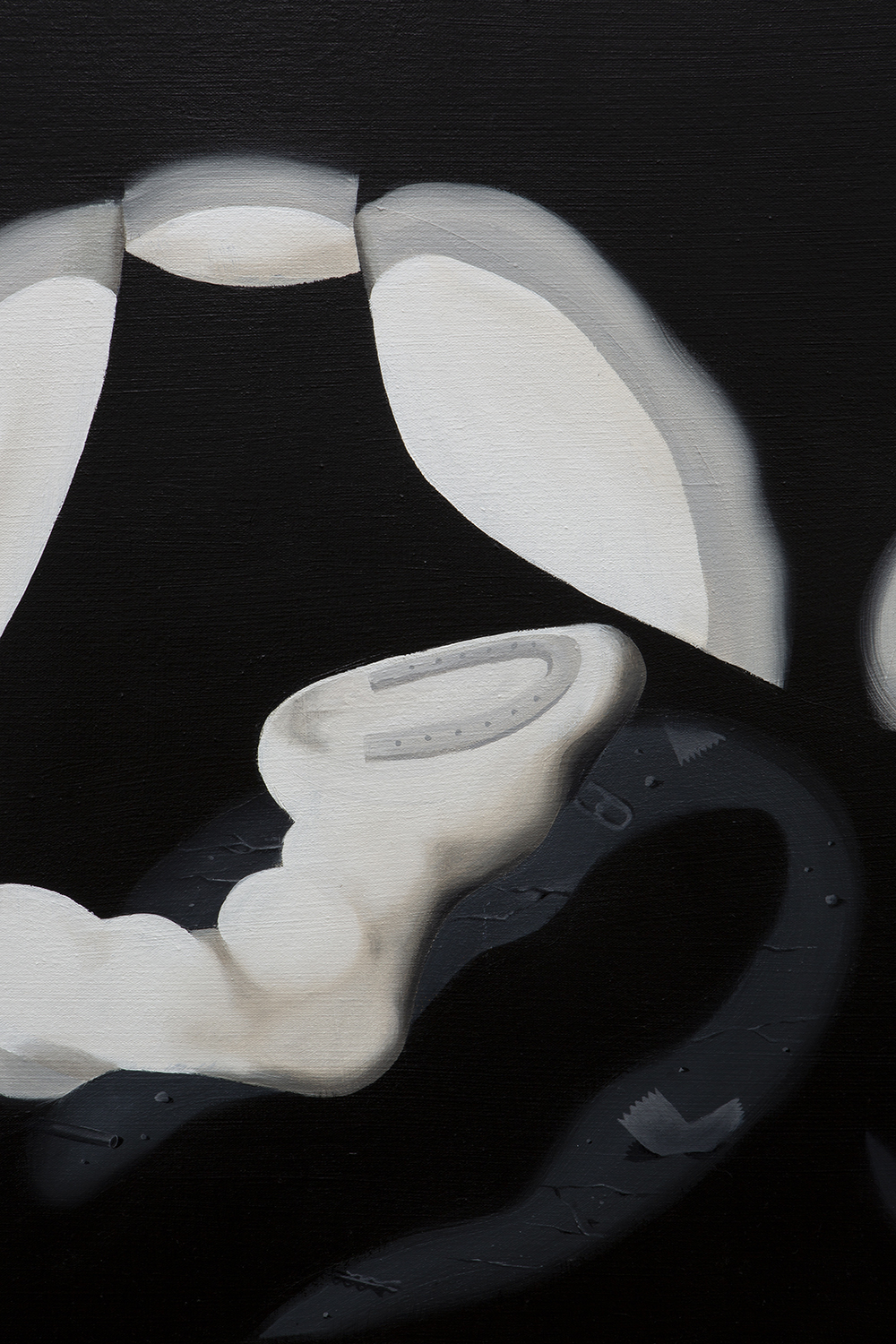 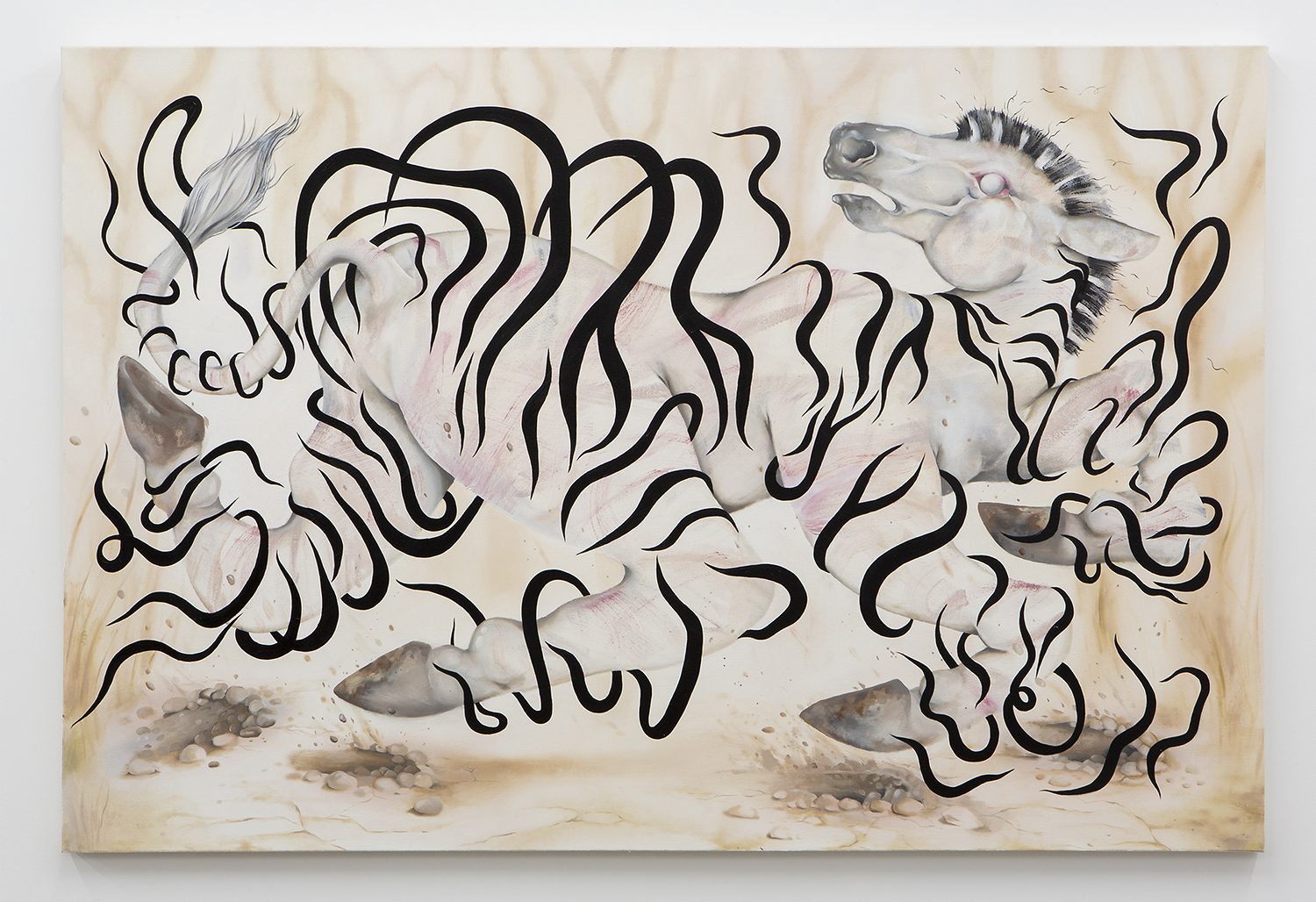 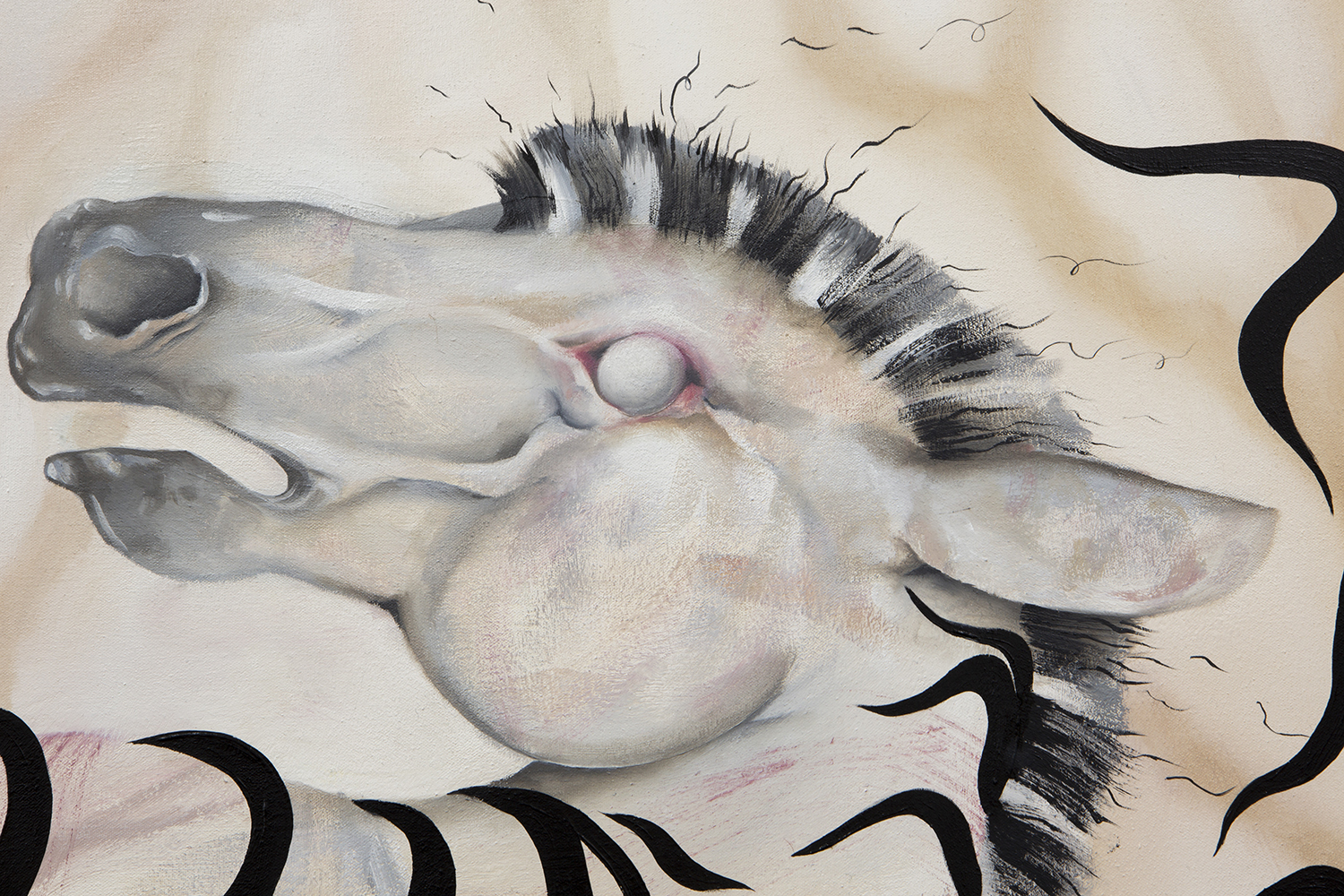 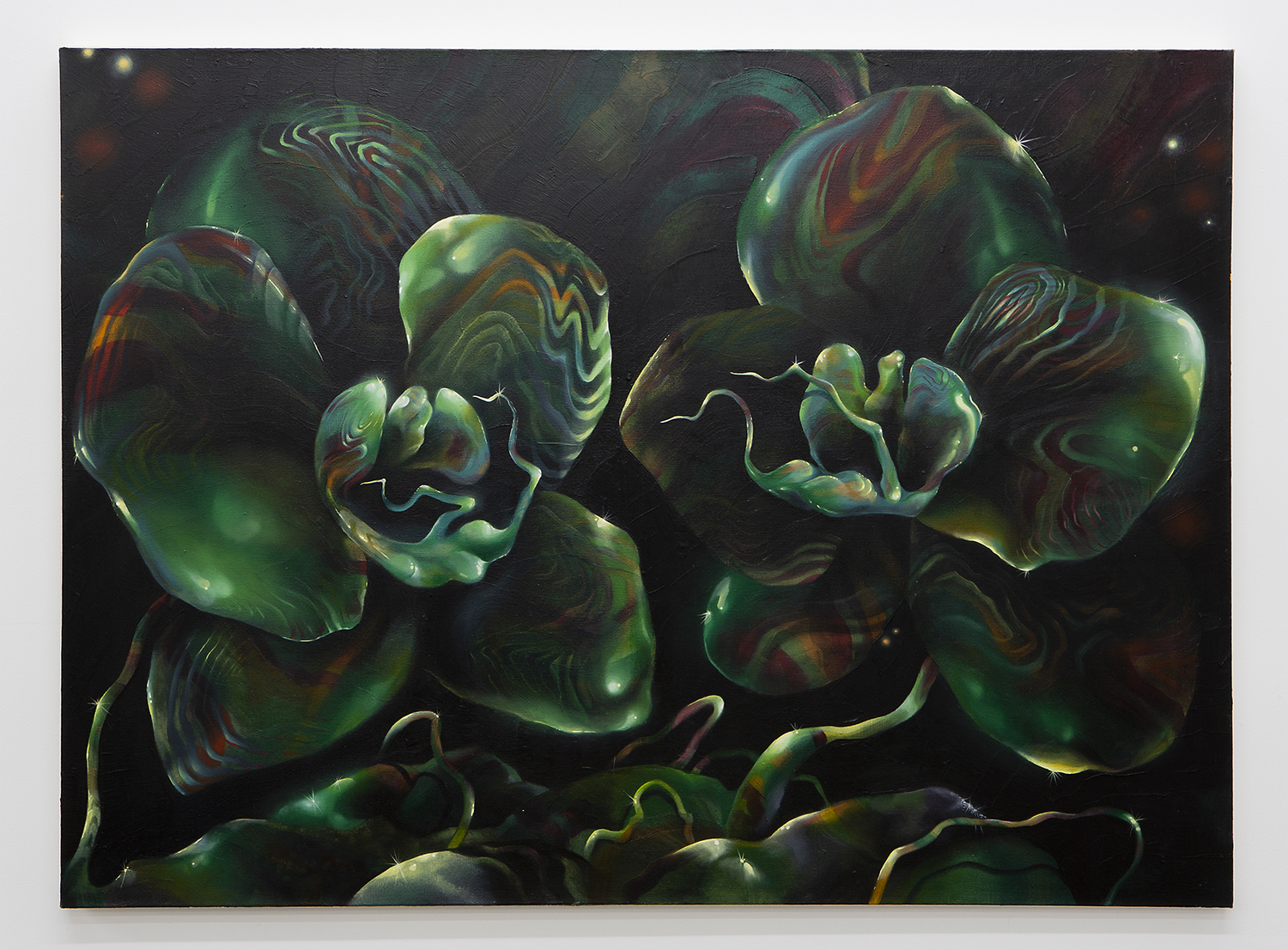 Been Feeling, Softened Through 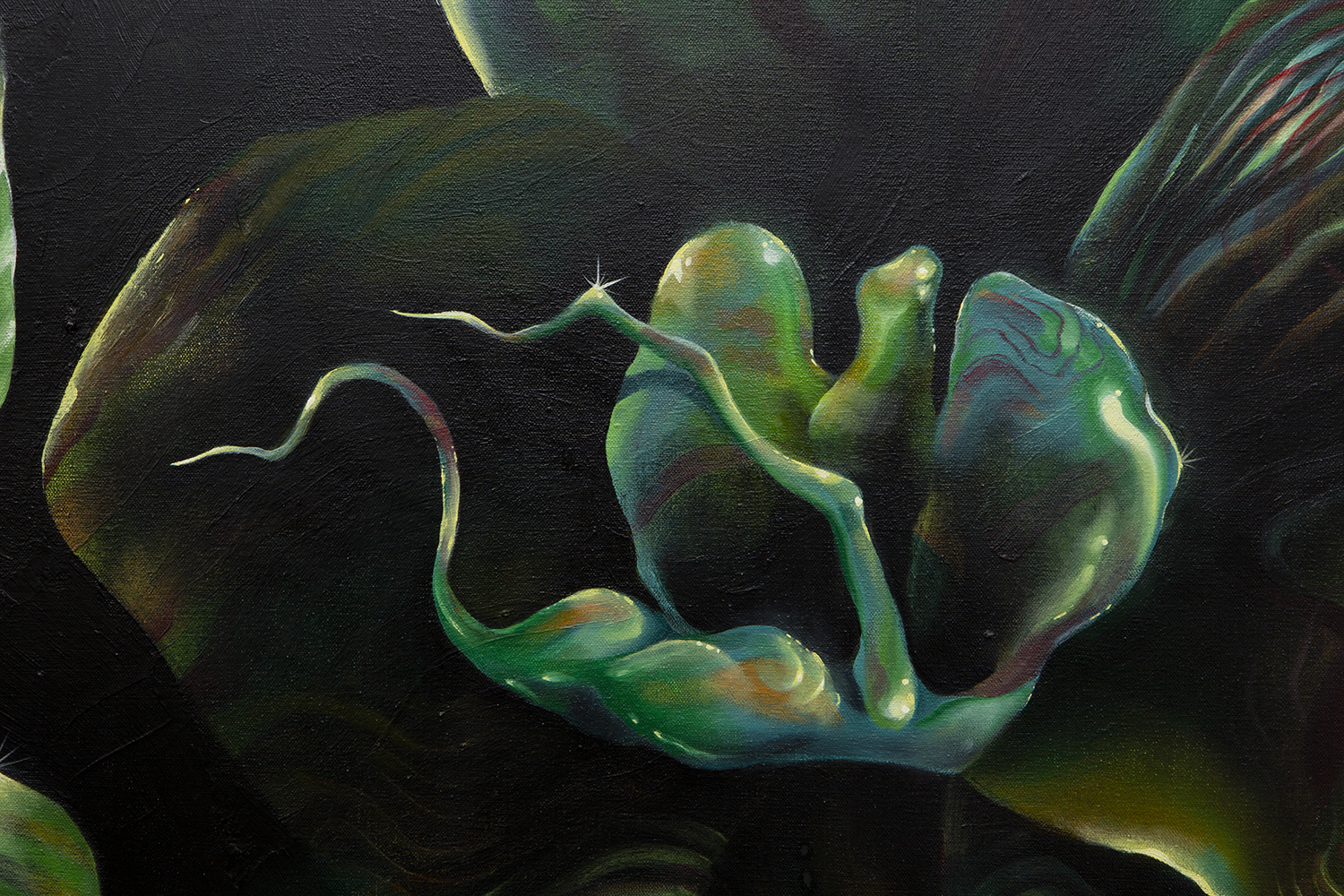 Been Feeling, Softened Through, detail 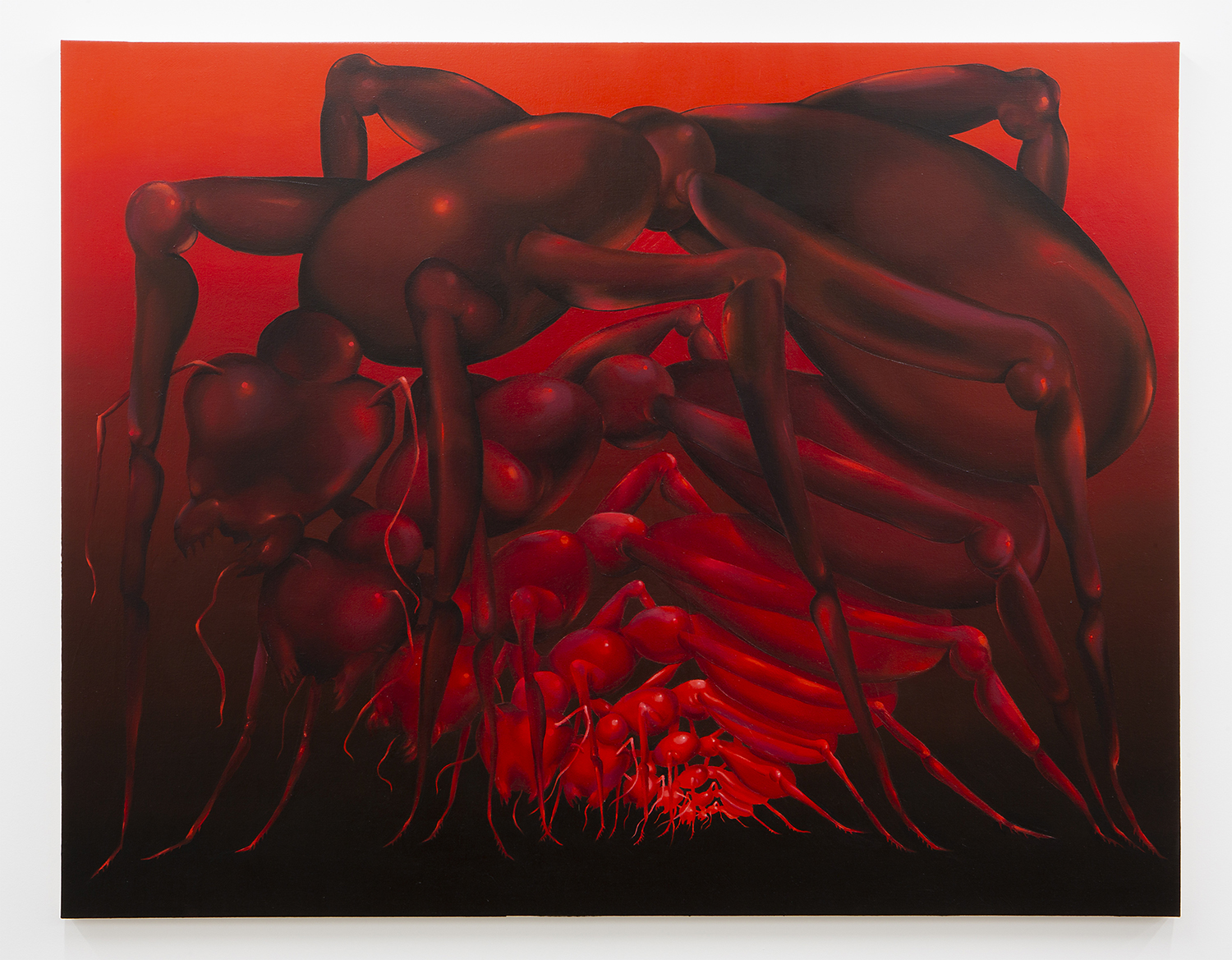 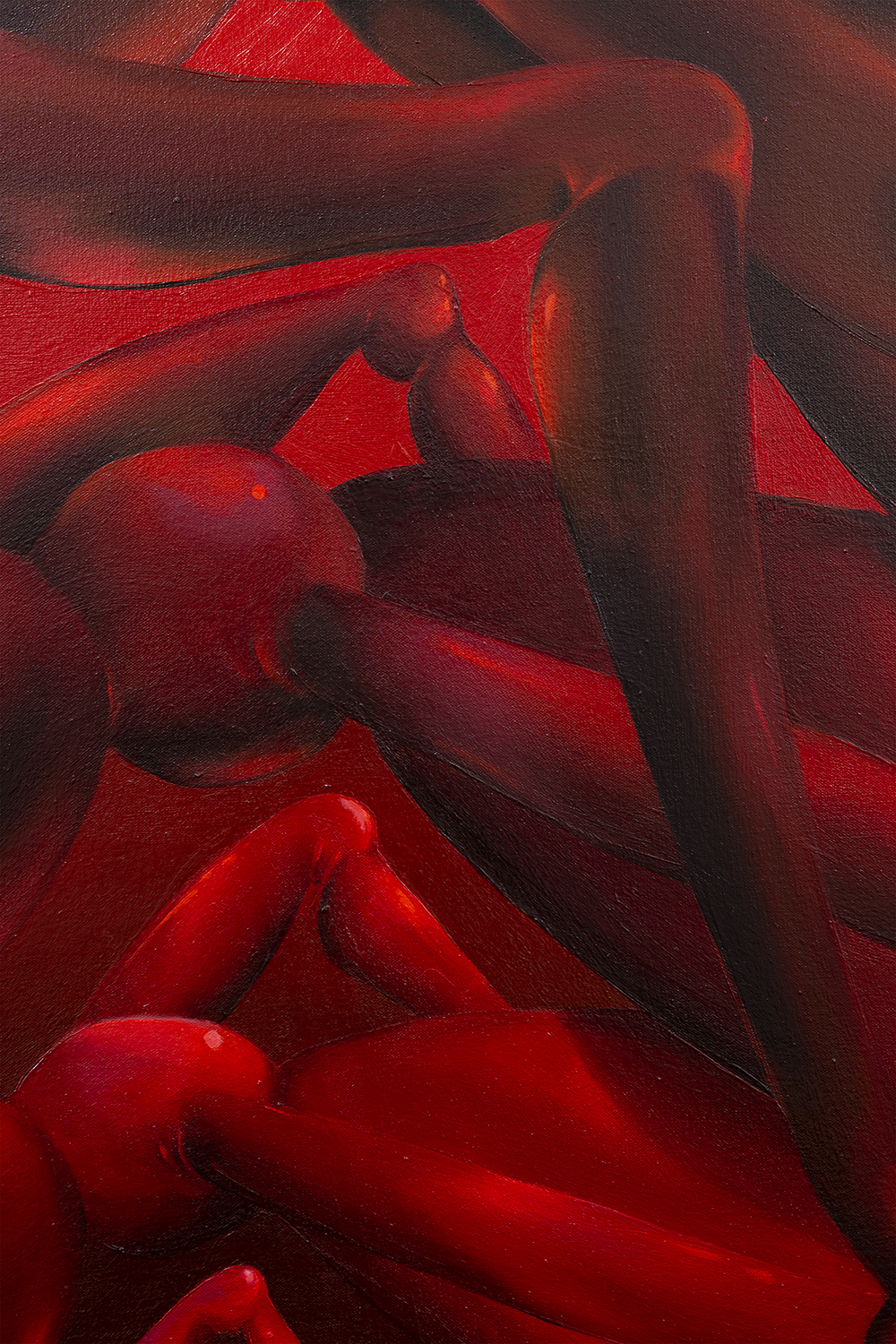 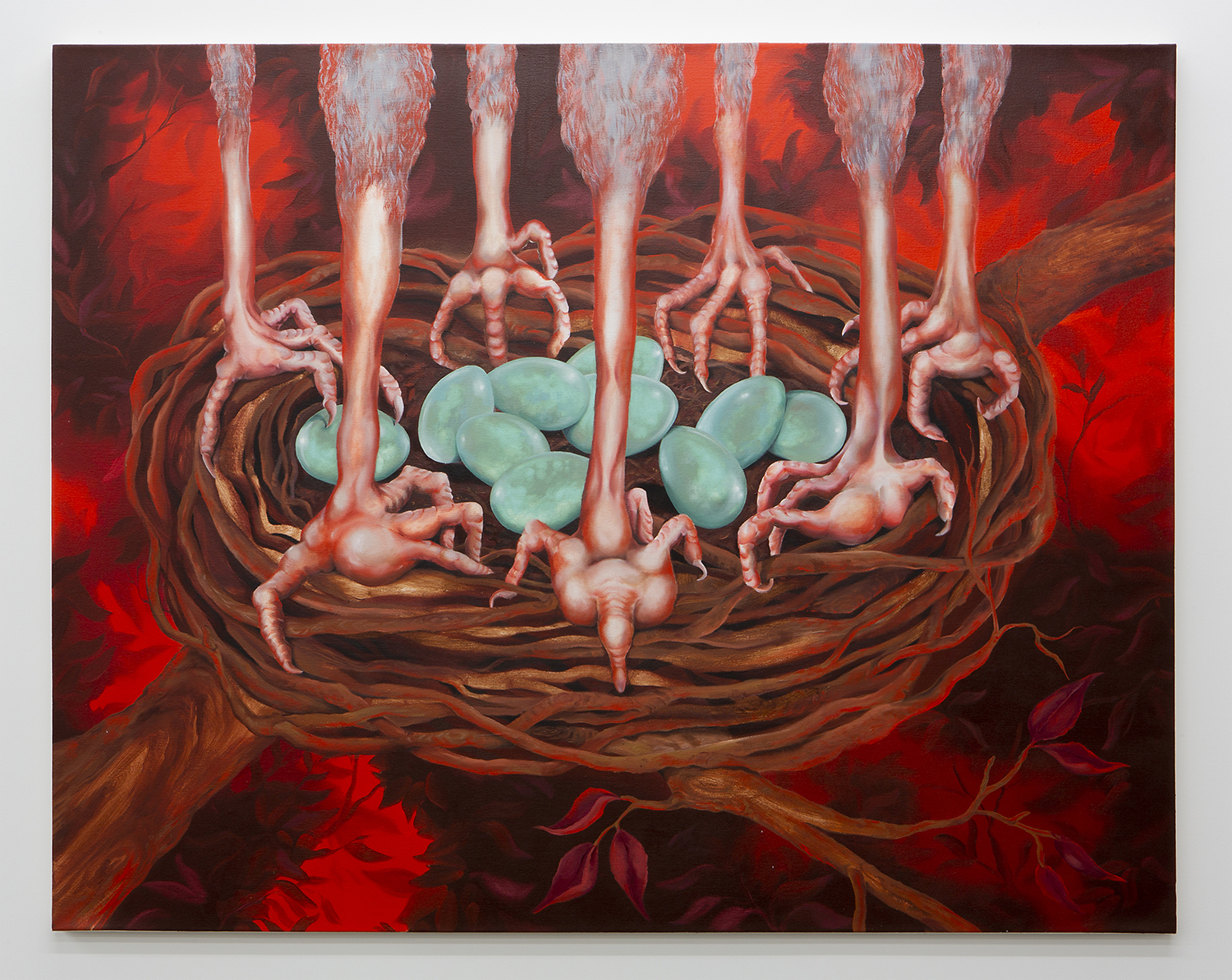 The House Holds the Key 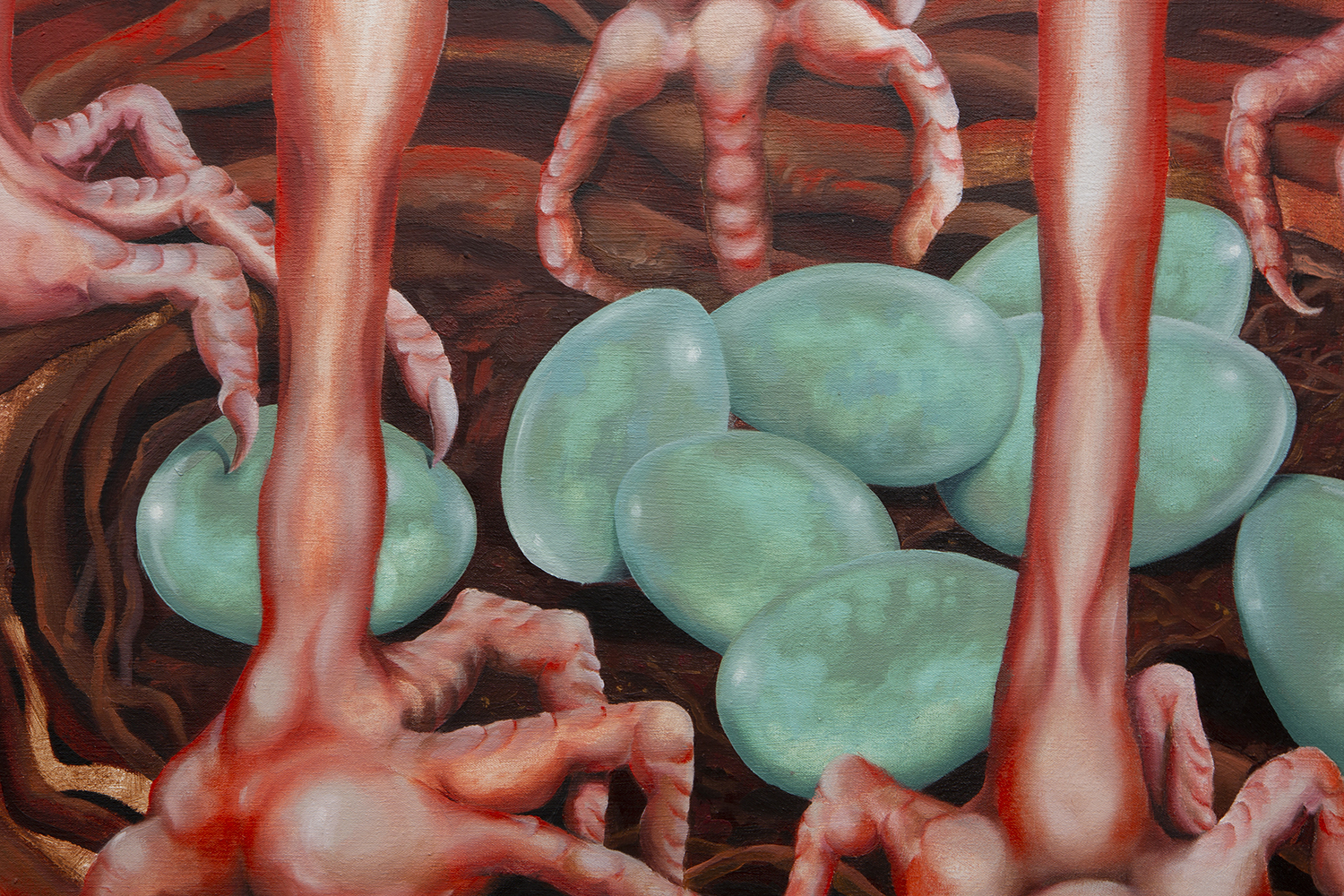 The House Holds the Key, detail 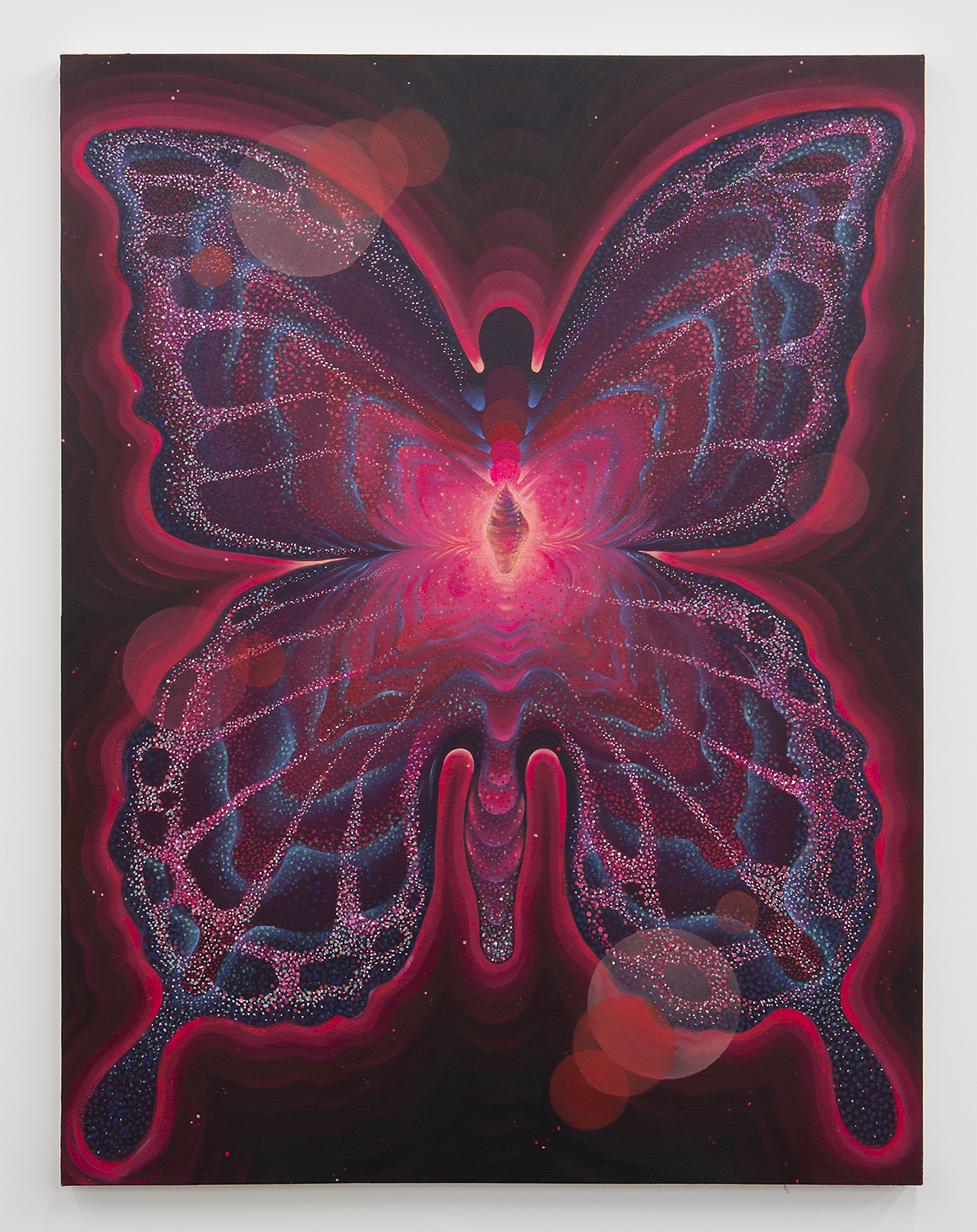 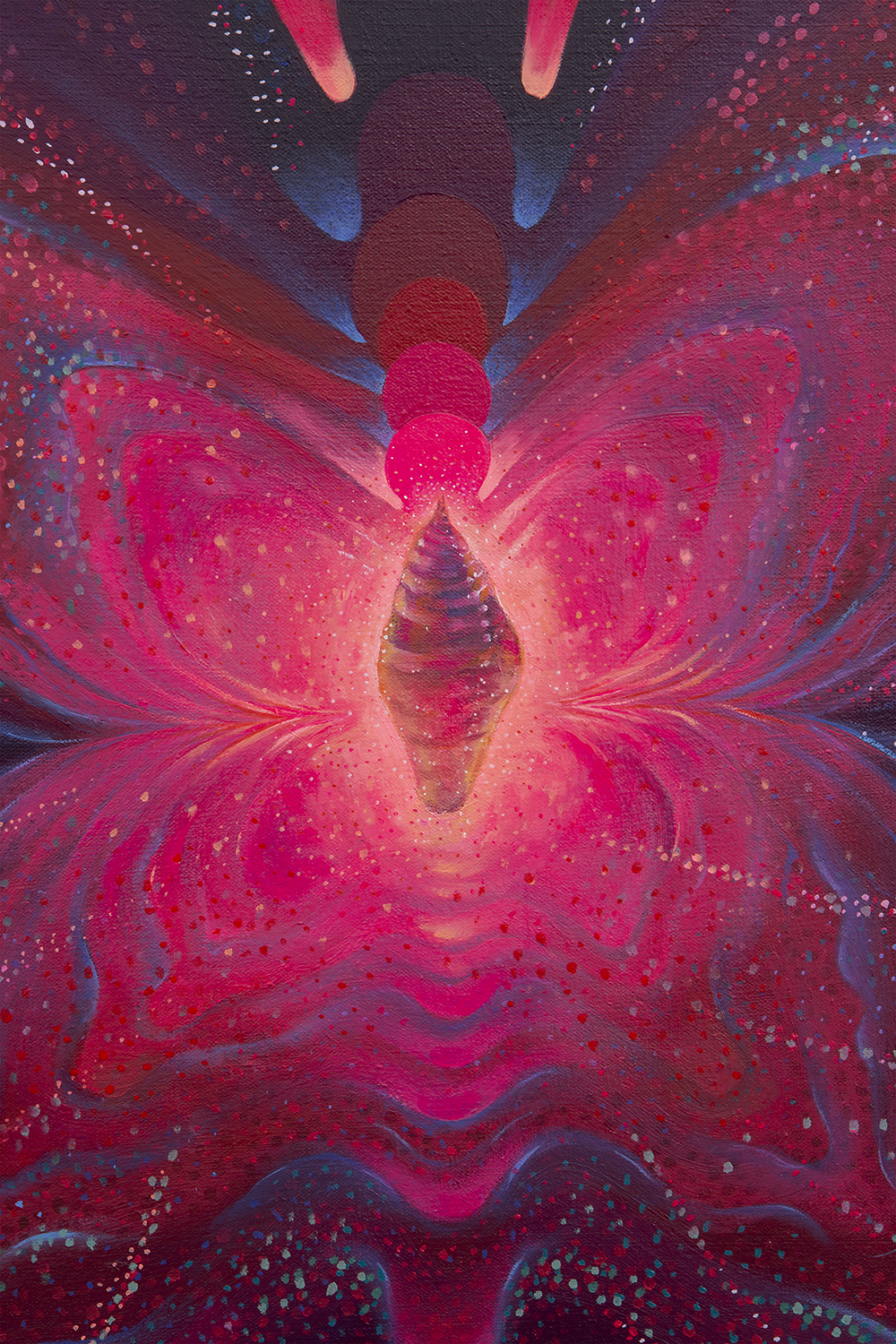 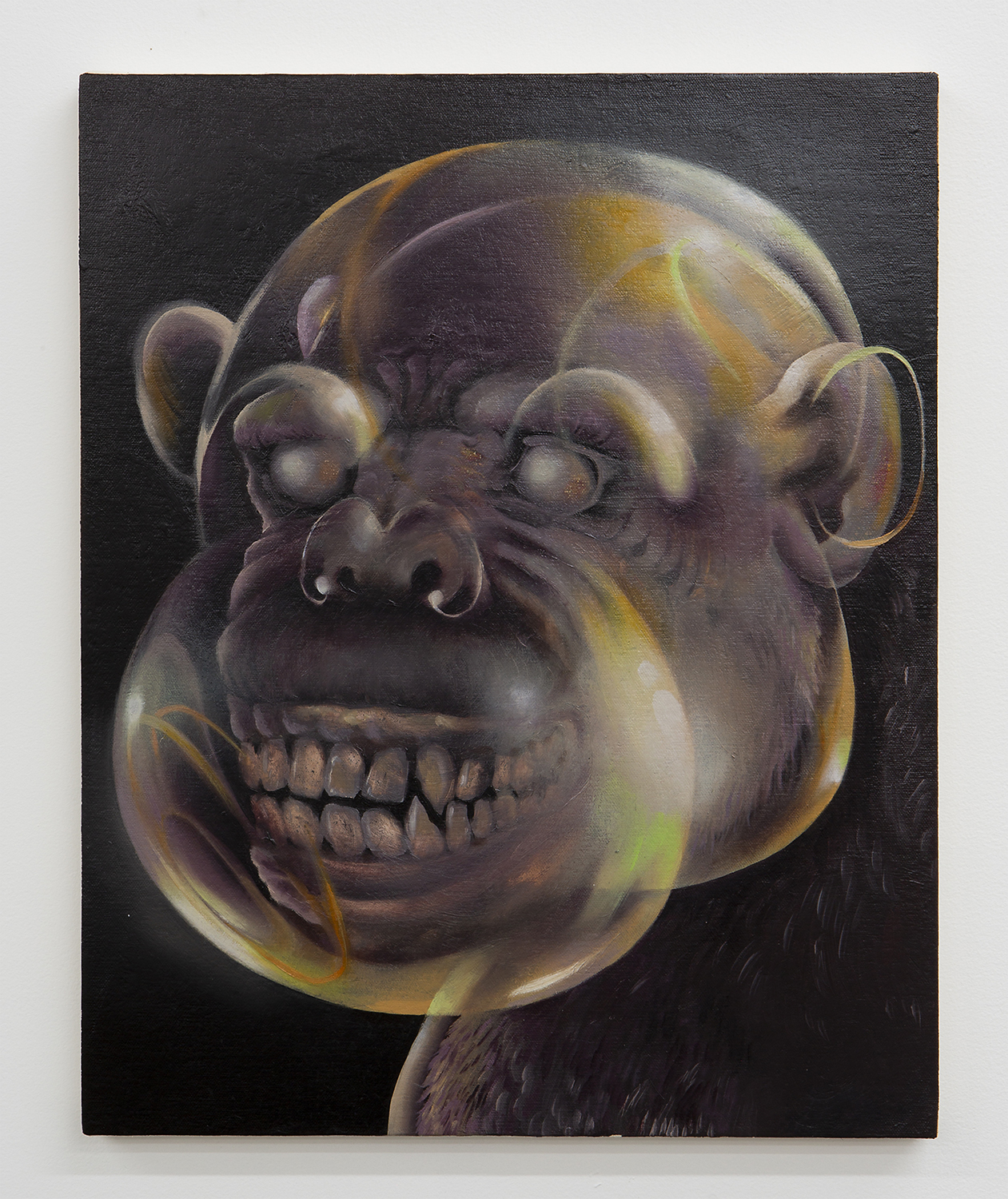 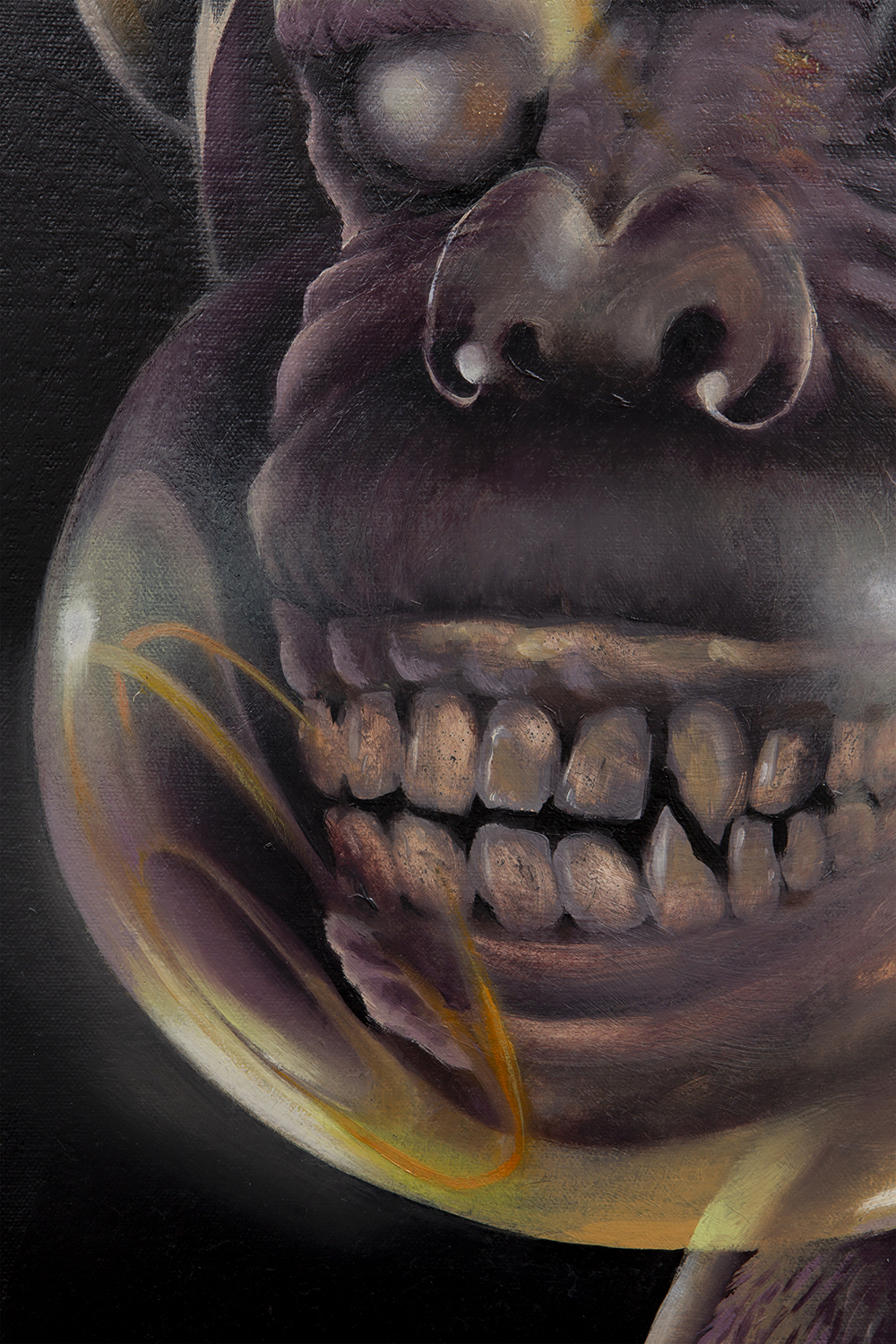 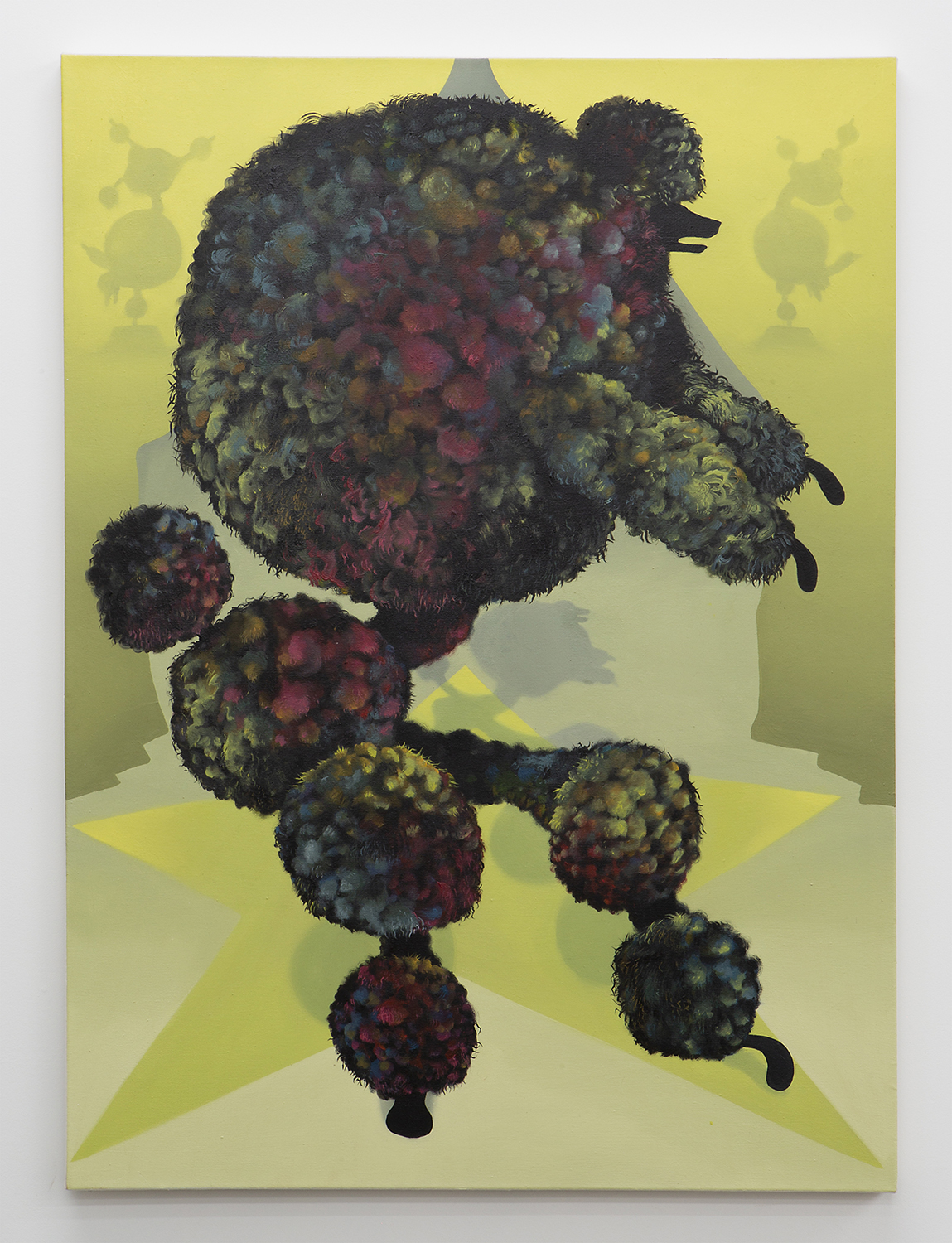 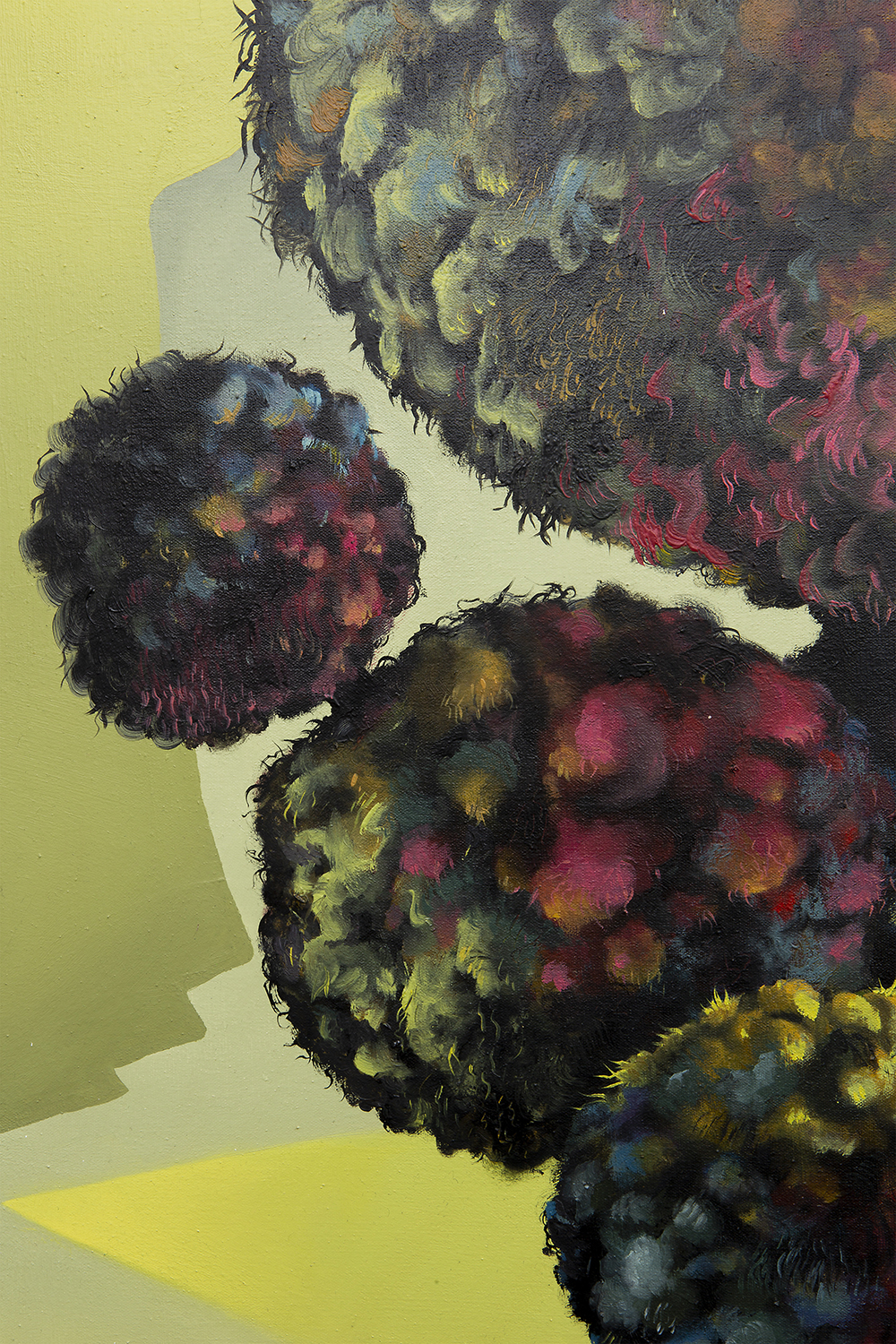 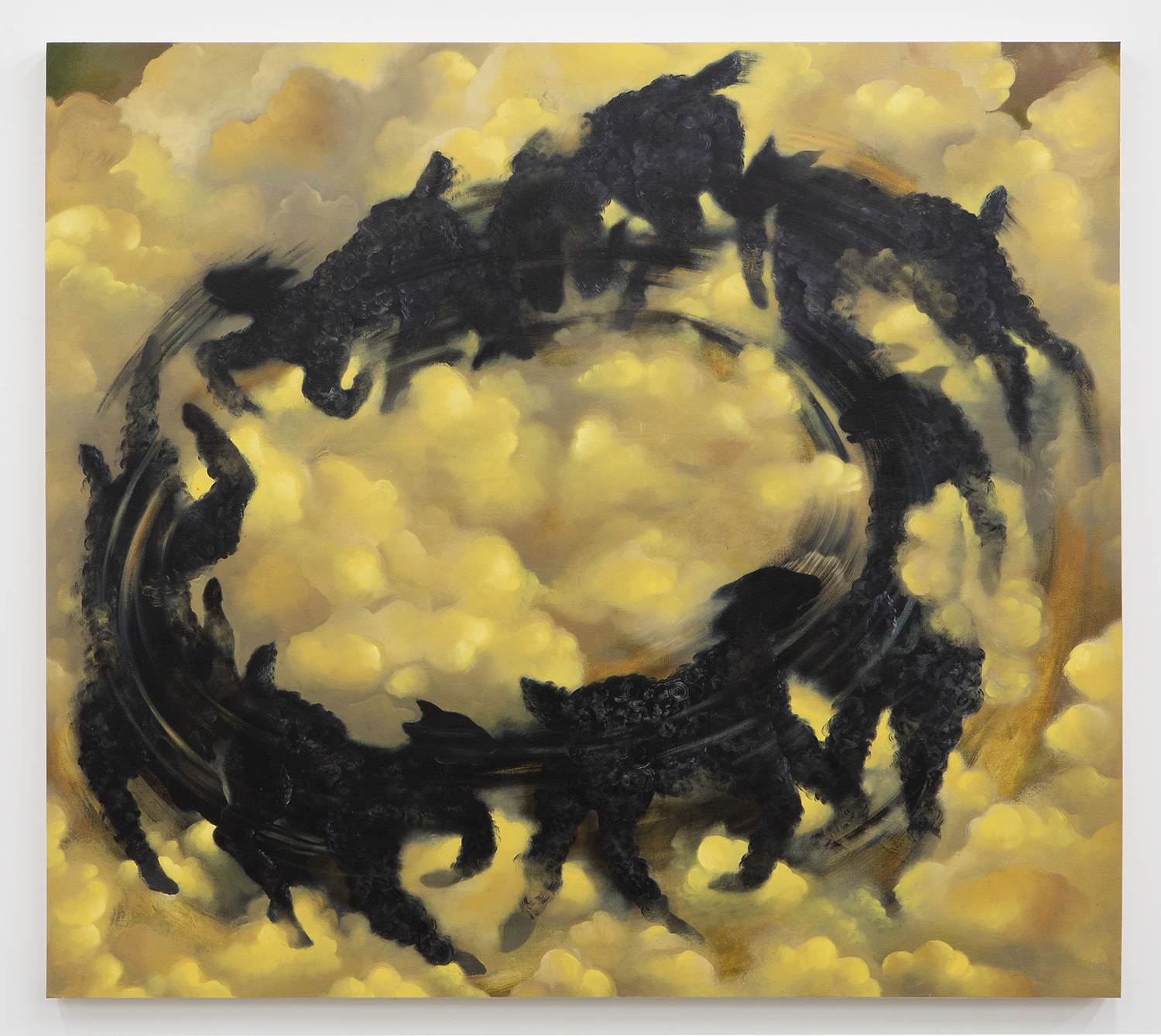 This month, New York-based artist Kat Lyons opens her first solo presentation of paintings at DELI in Brooklyn. Titled Pantomimia, the exhibition continues on Lyon’s previous series, expanding her universe of the natural world and portraying it well, unnaturally. Through exaggerated compositions, thematic lighting and an unorthodox confluence of styles and aesthetics, Lyons has blanketed her figures in a heavy atmosphere, one that’s a little perverse, cartoonish and intriguing all at once. Phantasmagoric animals, plants and insects arrange rhythmically on her canvases, injecting splices of narrative throughout, and while the story is unclear, her subjects gesture with intention. Radiating intensity, Lyons's solo exhibition Pantomimia vibrates on a strange frequency, one that's dramatic and formidable, and most importantly, not to be missed. 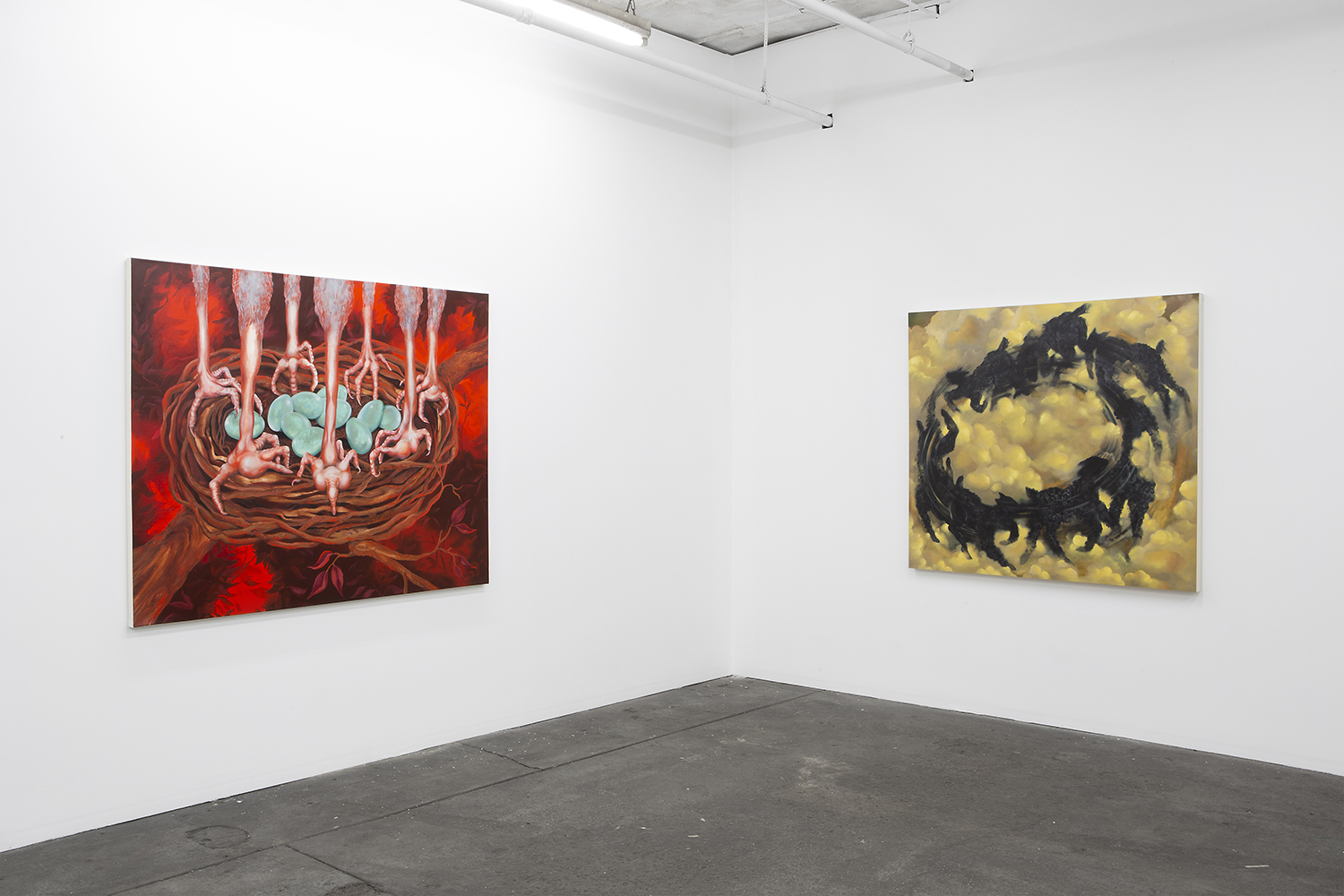 I have seen the entire Universe on the tip of one dog's eyelash. What happens when she blinks?
Ape, horse, zebra, flock of sheep, pair of orchids, poodle, ants, butterfly and birds: creatures of the mind, all gather under the big top of fluorescent lightning. If a museum is a factory then perhaps the gallery is a circus. You are witnessing the witnessing. Here lighting becomes a form of violence where relentless illumination forces a reveal from the darkness. Spotlight quickly oscillates into a searchlight. There’s room for one more unfortunate lens flare, or a camera with a motion sensor triggered capture. This is the world of our beloved eagles spotted through the viewfinder. 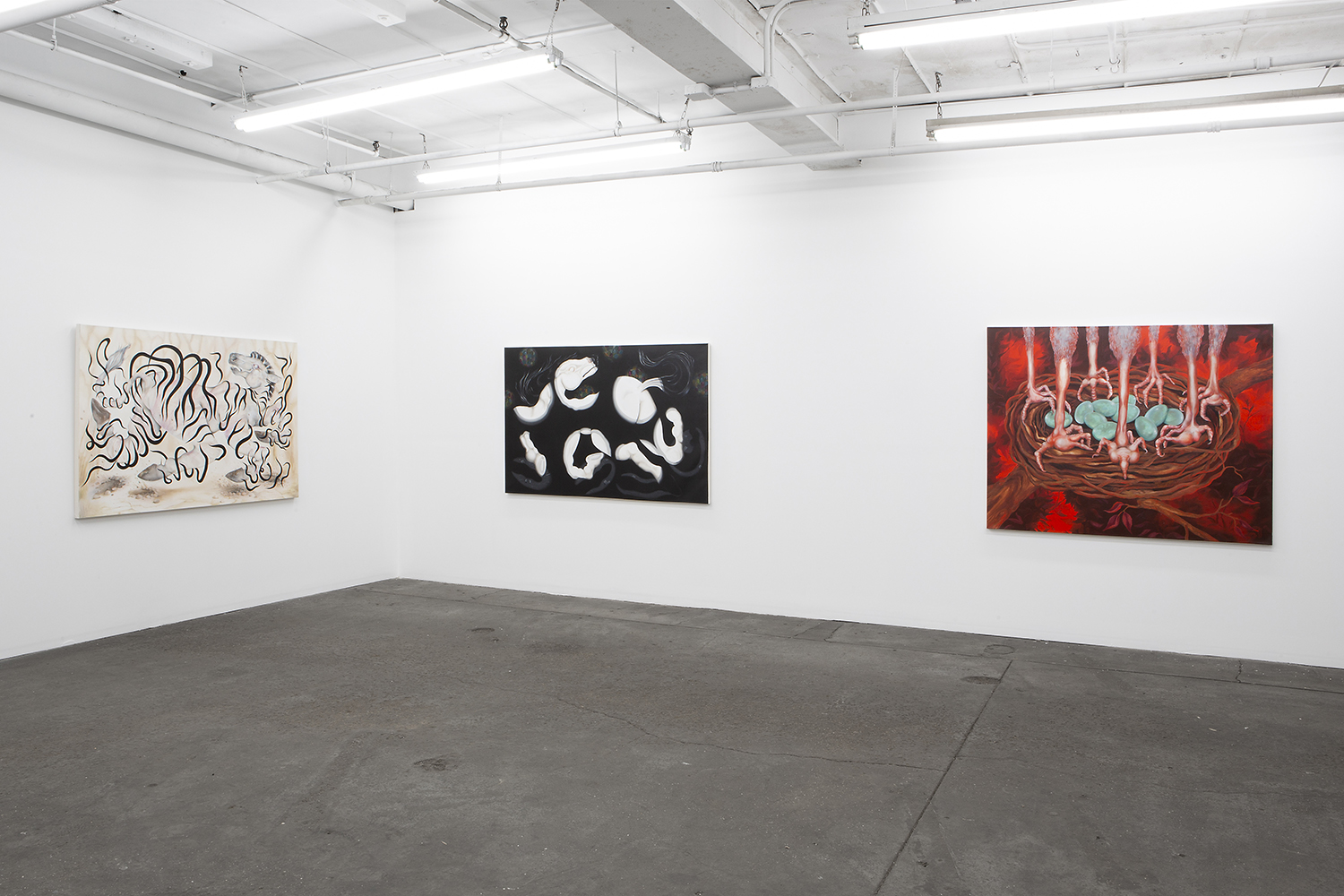 The first time I ever saw a bald eagle I was hitchhiking eight hours South to the airport that would bring me back to life on the grid. We pulled over, stepped out of the RV (a vehicle with a reputation for never picking up hitchhikers) and I got handed a pair of binoculars. Just the sheer weight of this viewing device left enough of an impression to remember this years later, but when I directed my newly assisted gaze to the “top of that tree,” as had been instructed, I was stunned. At the highest branch of a drunken spruce tree, typical for the region, I witnessed a bald eagle eating a meal, with a tangle of intestines dangling from its beak. The schism between this viewing event, and my understanding of the symbol based on the same animal, was comical. Here’s a situation where expectations are rendered useless. After being spellbound for an unknown lapse of time, I slowly lowered the binoculars from my face, refocusing my line of sight. I hadn’t known that viewing an animal could elicit such voyeuristic tendencies, but there I was on the side of the road, shocked by the scene, and still confused by the weight of the binoculars. The next summer I returned to this region. My sightings of bald eagles became commonplace. I usually saw them on my weekly trip to the local dump. Everyone knew they’d be there. Now that I live in New York, my neighbor’s backyard is a frequent stopping place for cardinals. The red is an easy catch, even in my peripheral vision. While geographically removed from the original site, the scene of the eagle and the intestine tangle is one I often return to. 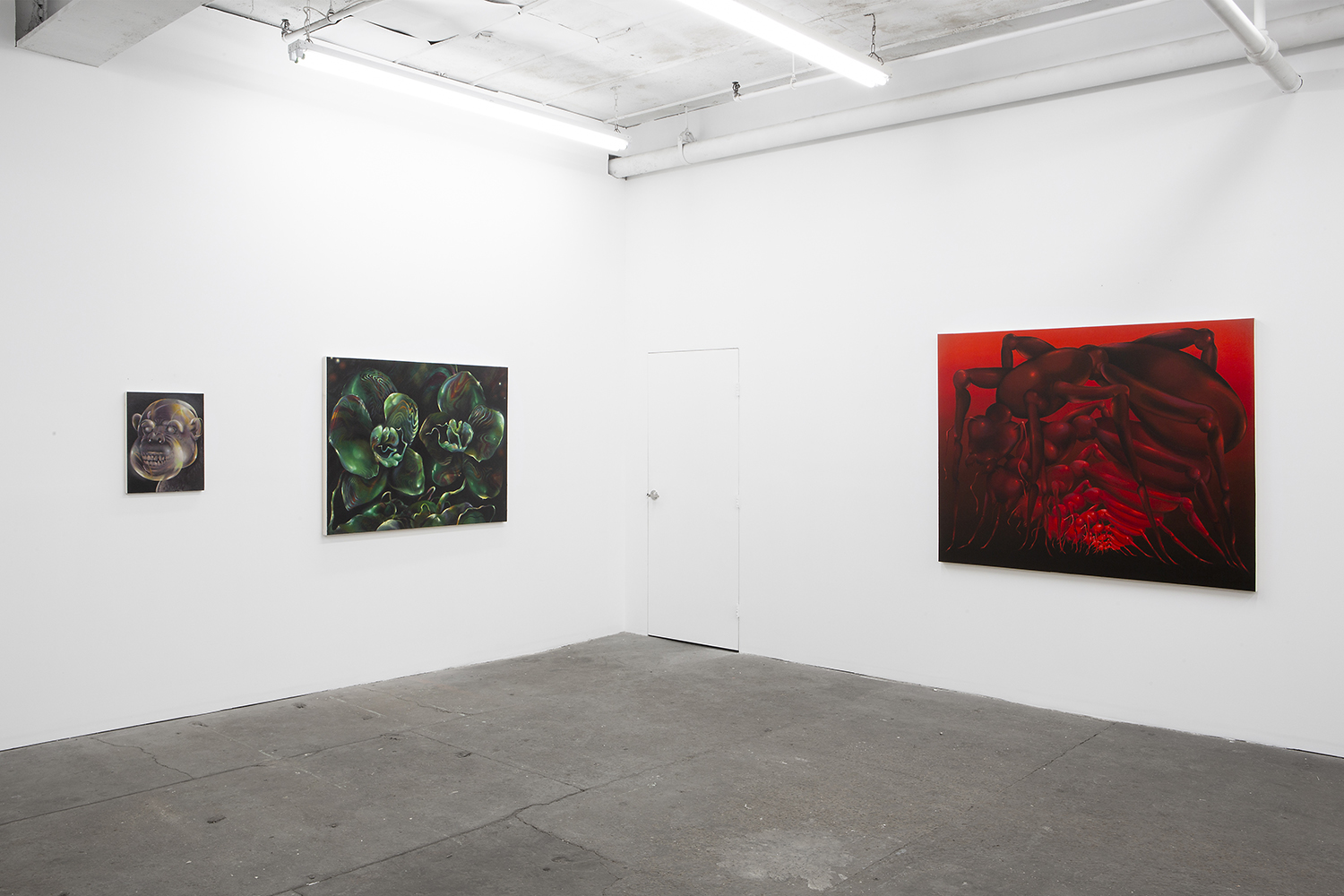 When did nails become less used for scratching? When I want to scratch, I write, dragging my pen across the paper. Now one thinks of it primarily in some horror realm, one last attempt at survival, where we regress to some behavior in which we wish we had some claws. Or maybe it’s just a repetitive self-destructive gesture, brought upon by some daily stressor. But there are slips: giving a head scratch to a lover or searching for lice in a child. What are the ways we can confront our own animalness in other instances than ones brought upon by fear? Or maybe that will always be the most redeeming quality of fear. If Cady Noland teaches me about violence, Kat Lyons teaches me about fear. Perhaps if we can consider the zebra losing its stripes, we can end up somewhere in a familiar valley, with just the right amount of horizon in view, where fear swaps out for spirituality. Humans aren’t the only ones who leave marks. –Suzanna Zak 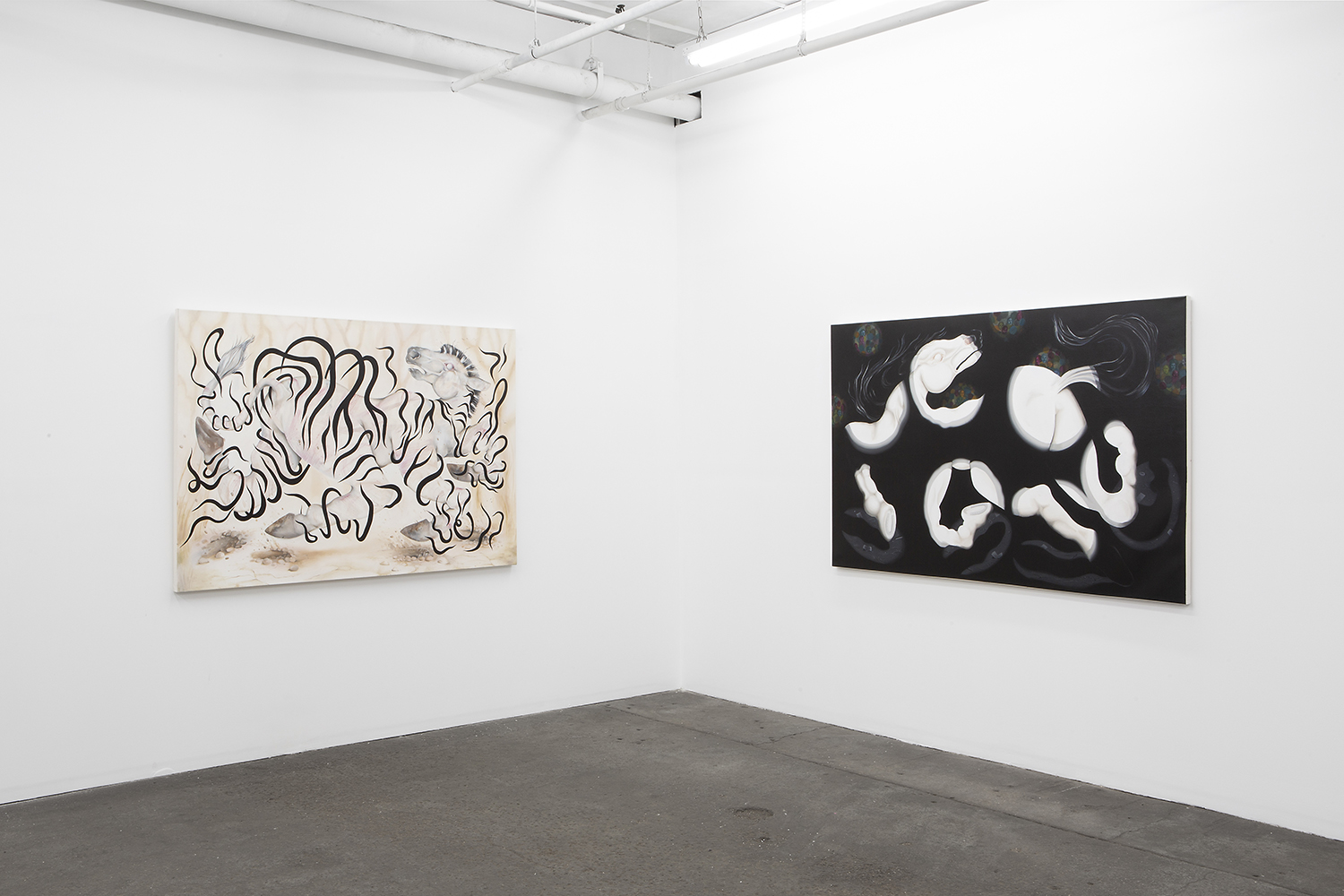 Pantomimia opens at Brooklyn's DELI on February 7, and on view through March 1, 2020.