Jessica Hess debuts her latest solo exhibition this weekend at Hashimoto Contemporary in San Francisco. This exhibition will be on view from May 4th to May 26, 2019.

Dasha Matsuura: For your shows, you have always had a very strong sense of concepts with a really clear map of what you want to explore in each exhibition. (I looked, we talked about this show in 2017 during our last interview!) Can you walk us through the themes and concepts you set out to explore in the show and how it shifted in the studio?
Jessica Hess: My plan was to explore some of my more dilapidated subjects, places that, in reality, have been abstracted through physical manipulation, decay, and demolition. The works, while still hyperreal, appear strange, jumbled, and difficult to process. I set out to create and maintain a state of visual confusion for the viewer while prompting questions like "What am I looking at?" and "How did it get this way?" My new works are quite strange as they slowly approach abstraction and I am happy with the results so far.

My very first painting instructor told me the only truly successful abstract art was made by artists who first had an understanding and certain mastery over realism. The end result was a visually informed and deliberate reinterpretation of reality. His work was quite stunning and was, for years, the only abstract art I appreciated. I believed him when he said artists should have a slow evolution towards making abstract works and that it's a journey that spans a lifetime. This is an idea that stayed with me and one that I will be exploring even further in future works. 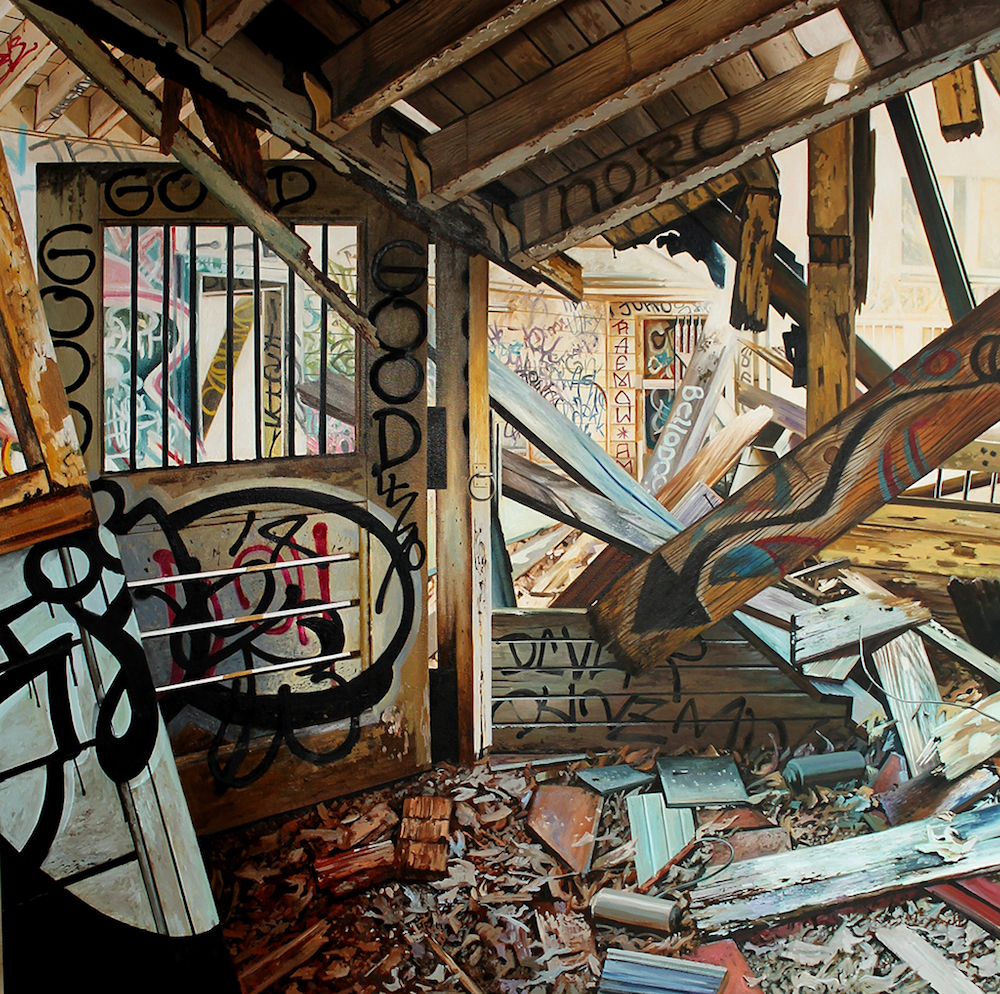 The only difference between my original concept for The Chaos Aesthetic and the finished body of paintings is that a lot more natural elements crept into these new works than originally planned. It was sort of a happy accident, a discovery that took me in a new direction. Midway during the production of paintings for the show, my friend, Rachel, visited my studio and made an interesting comment about a painting I was working on at the time. "Knee Deep II" depicts a tunnel at the beach in Davenport, California. The painting sets the viewer in the swirling water under one of two tunnels, one rugged, one man-made and smooth. The scene between the two tunnels is interrupted by a fallen tree, various wild plants, rocks, and water. The viewer's back is towards the ocean and you are looking inland through the graffiti-filled tunnel into the distant green brush. "Knee Deep II" was something I was working on just for fun and was not slated to be a part of my show at the time. She commented, "It's so chaotic." I was surprised to hear this as I had not yet told her the title of my solo show. She really got me thinking about the chaotic qualities of nature. I decided to include the painting and subsequently, more nature crept into my subjects after her visit. I thought about how I used to have great difficulty painting organic landscape elements because of their unpredictable structure. For years, I avoided it completely. Often excluding natural elements from my paintings.

Looking at my older urban and industrial landscape paintings you'd be hard pressed to find a weed growing in a crack on the street. That is how little plant life I included. I was more comfortable depicting the orderly arrangements of bricks, composing man-made buildings, placing regular shapes in the predictability of architectural structures, and taking comfort in the rules of perspective. Nature had been an incredibly difficult subject to render because of its randomness, it's chaotic nature. Painting these elements successfully was not something I've always been able to do. It took me 38 years. Yes, I'm 38, folks, and I can finally paint happy little trees! 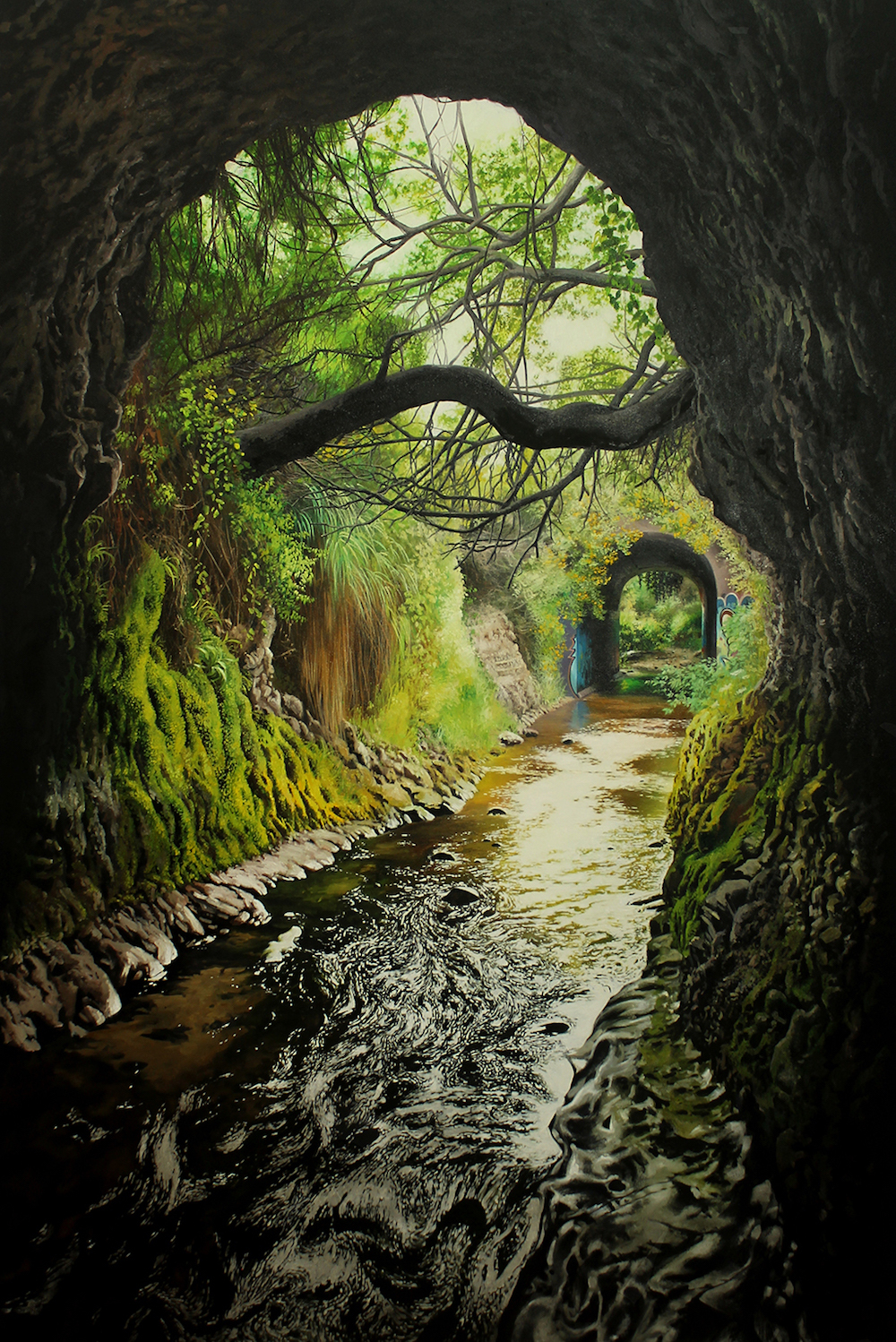  Some of these pieces are really disorienting in a great way - peering through portals, spaces that are ambiguously indoors/outdoors. Were you interested in abstraction through decay and how the manmade structures felt more organic in their breakdown?
Absolutely, abstraction through decay is central to this body of work. Disorientation was a partial goal with these new paintings. I'll say it again because I still believe it to be true, "Mother Nature is the best abstract artist." I not only wanted to confuse the viewer as to what they were looking at but to make them wonder where they were. My Hide & Seek series embodies these ideas especially. Each work in this series places the viewer behind some unnatural, ambiguous, man-made structure and allows a small peek into a lush natural landscape through various rugged openings. The paintings have a keyhole/portal feel to them and are meant to make the viewer feel like they are sneaking around and hiding. The architectural structures framing the distant landscape are failing, leaving you with a false sense of protection. Your hiding spot is clearly flawed and it’s only a matter of time until you are at the mercy of nature and whatever it is you are hiding from. Mother Nature is literally tearing down the walls around you. All day, every day. We are quite impermanent on this planet, yet we are doing an incredible amount of damage while here. I suppose it is a loose commentary on the steady decline of our planet and the uncertain future of mankind. Our infrastructure is failing and the world is grossly overpopulated. I don't have a positive view of the state of our environmental affairs and I'm quite critical about mankind as a whole. 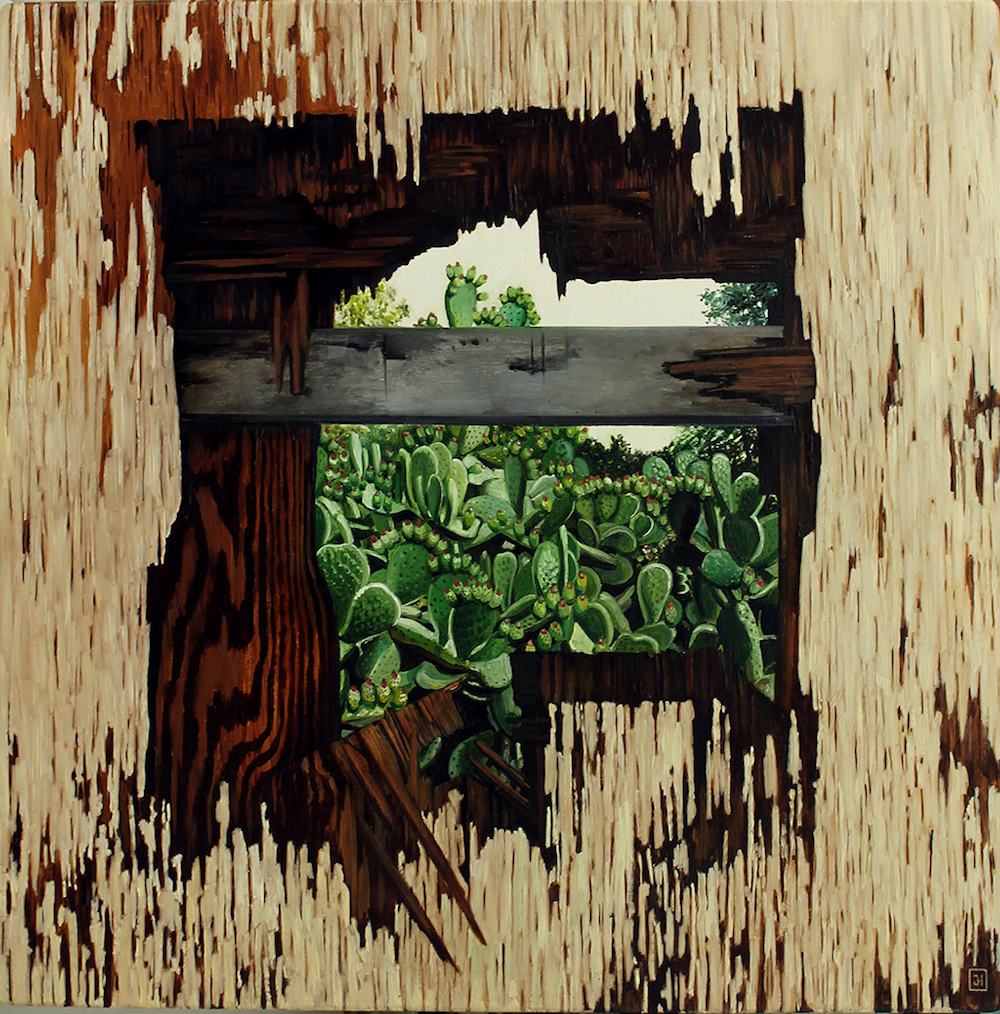 Your process involves a lot of meticulously organized reference images that you take to add to and augment your hyperreal compositions from textures and landscapes to tags and plants. What draws you to certain subjects?
Do you believe in love at first sight? Nah, I'm joking. I'm the least romantic woman you'll meet but not when it comes to painting. I have love affairs with all the places I paint. It's a feeling of "I'll know it when I see it," and I go to great lengths to capture my subjects.

I love abandoned spaces, especially those in decay. I work only from my own photographs and it is very important for me to actually visit my subjects in person. I enjoy urbex (urban exploration), it is something I was doing way before it was a pop-culture term. 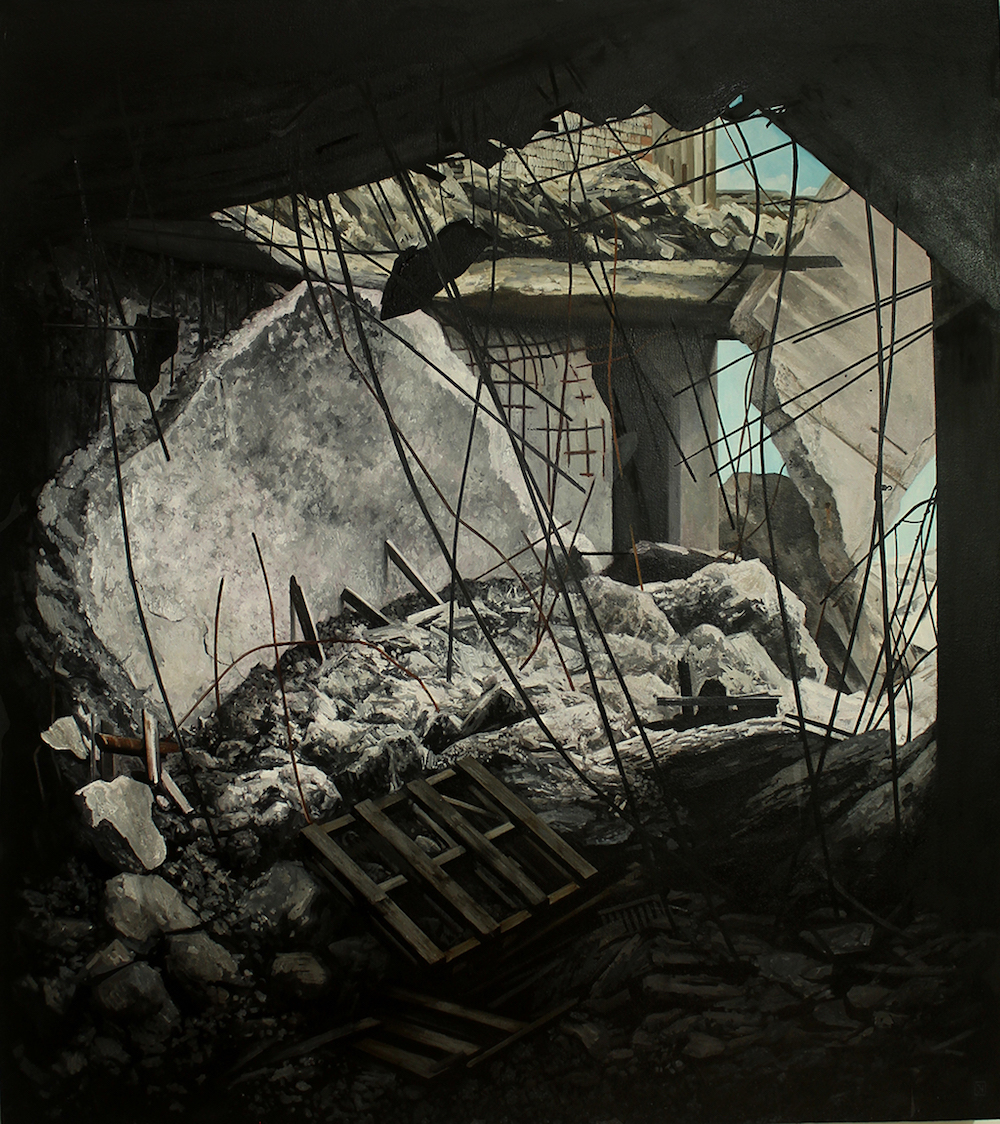 Exploring Detroit is a good example. It wasn't so much about avoiding security or unstable, unpredictable, drug-fueled squatters but the actual decay of the buildings that made these places unsafe. Urbex is dangerous, especially when the structures are unsound. I know, I once fell through a floor. The risks one will take for love right? Also, there's a great adrenaline rush, and that sneaky satisfying feeling that you got away with something (mildly) illegal. Well, that's how I experience it anyway.

I have two paintings of locations in Detroit in my The Chaos Aesthetic show. "Hard Hat Area" and "Uneven Surfaces." Both of these are of the Packard Plant, the third and fifth floors respectively. I hope it is apparent by looking at my work that a chunk of concrete could have fallen at any point and ended me. It wasn't until I got back into my studio and was confused about some light on the ground while painting "Uneven Surfaces" when I realized and thought to myself, "Oh right, that isn't light cast on the floor, that is a damn hole in the floor!" You know you are achieving visual confusion when your own reference is deceiving you. 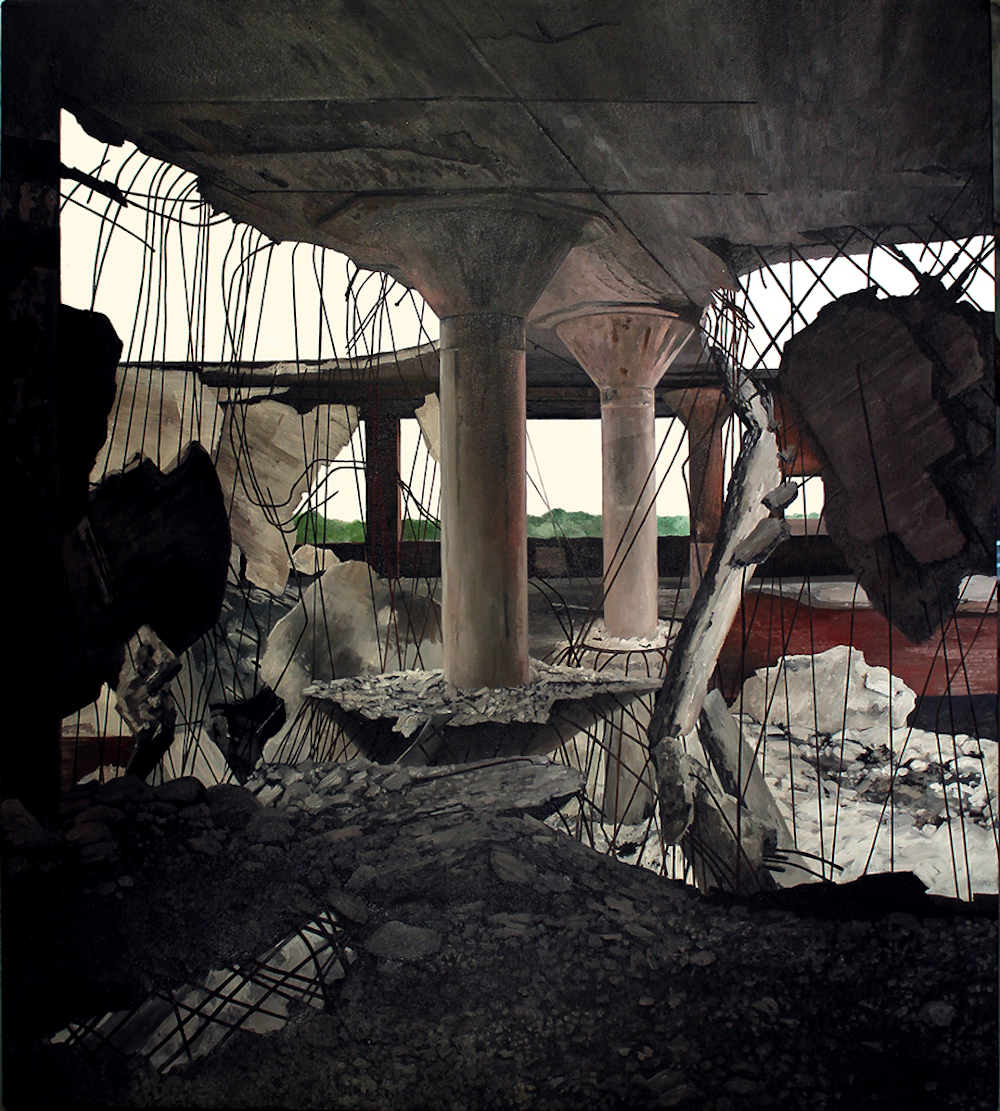  A lot of your starting reference images were collected/shot years ago. Do you ever revisit your subjects to see how they've continued to decay, change or disappear?
Only by chance. l don't plan for it or go out of my way. Lots of people send me images and updates about my former subjects. I have jokingly been called the Grim Reaper of architecture because shortly after painting them my subjects are often demolished or renovated. I don't have any supernatural powers, although I wish I could curse things, it's just that I am most attracted to structures that are not long for this world. I'll embrace the ruins but not the fucking condos. 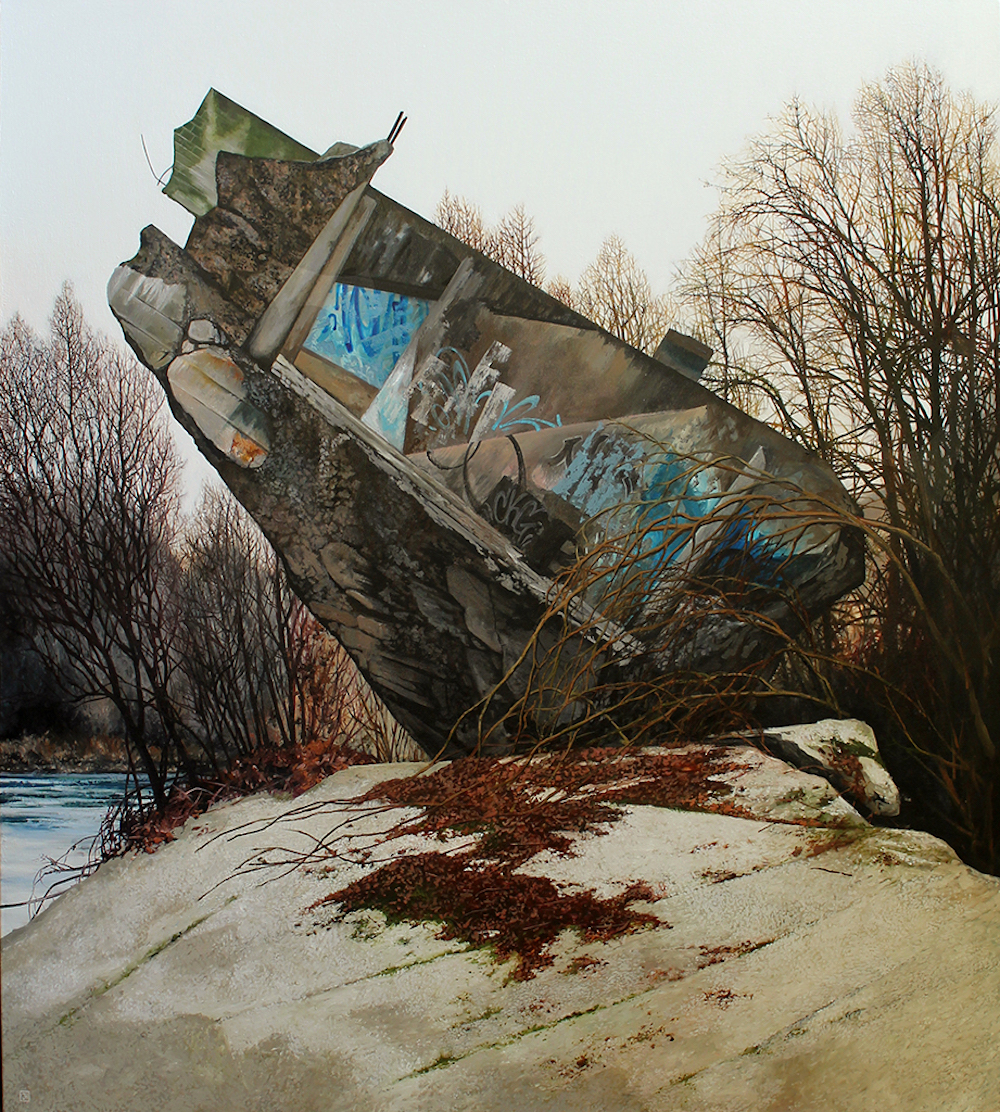 We've talked about how the idea of gallery paintings/meta-paintings like David Teniers and Frederic Bazille influenced the new work? What about the scenes of galleries/museums filled with collections inspired you?
Let's talk about art history! Well, basically what I've been doing for years is called meta-painting and it's nothing new, although I certainly have a contemporary take on it. It's a term that basically means paintings about paintings. I am specifically interested in the great eighteenth/nineteenth century depictions of private salons and museums. Fancy interiors featuring dozens of paintings, tightly hung floor to ceiling, showcasing collections. These paintings within paintings essentially become miniatures and they are endlessly interesting to look at. These paintings capture and lovingly present dozens of other artists efforts in single artists work. 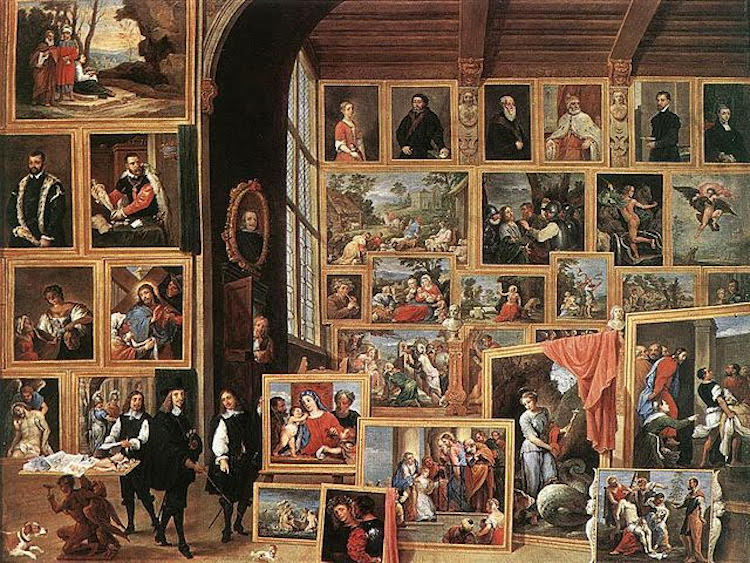 My inclusion of graffiti throughout my landscapes is not that different. I make a painting of paintings. In the past, I have referred to this as "anonymous collaboration". One's appreciation of this depends on their definition of art, however. Lots of people don't see graffiti as art. I do, of course, and my paintings depicting these places honor and represent these works in a different context. Instead of spray paint on the street, it's oil paint in the studio.

The best example of this is my largest painting to date, "Break Free," which is the interior of a disused military battery in the Bay Area's Headlands and is quite a graffiti-soaked spot. It has many things in common with these famous historical meta-paintings. It is an interior, three walls, a ceiling, and a floor, and is absolutely packed, floor to ceiling, with paintings by other artists, dozens of them. I explore and present places like this as unconventional museums showcasing dense collections of street art and graffiti. They are not trafficked by your average art lover or museum-goer, they aren't always safe or easy to get to, but there are art collections out there that deserve to be seen and my "meta" paintings take you there. 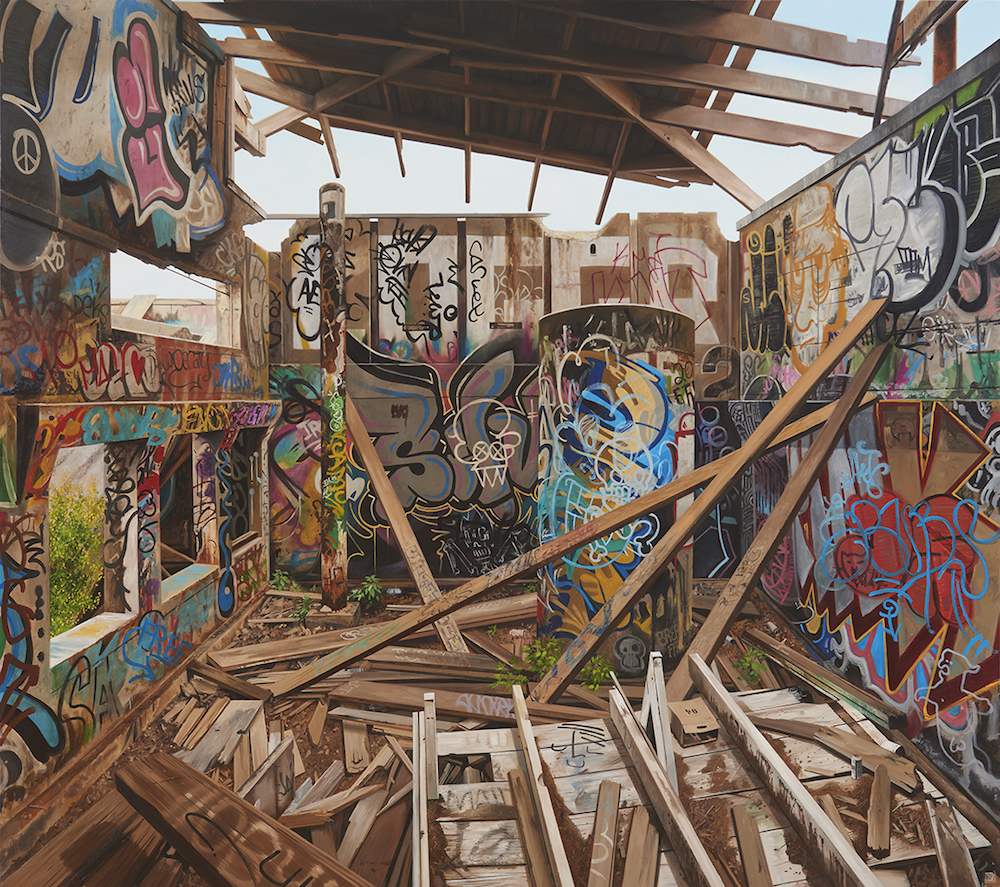 Going along with the theme of your incredibly thorough organization, what's the next show or concept you're going to be on to next now that this show is done?
I see myself getting increasingly lost in nature and exploring locations undergoing even more severe reclamation of man-made structures by natural elements. I'd like to present an architecture that has fallen to such a degree that it has become almost dream-like in that outdoor plants and even large trees are taking over interiors. I want smashed skylights and snow covered chairs. I want full-on forests growing in libraries and moss-covered furniture, you know. There's a flooded mall in Bangkok where koi fish have taken over that comes to mind while writing this. Places like that are really magical in their strangeness of nature reclaiming what was man-made. My work is headed towards something seemingly post-apocalyptic, but beautiful in the absence of man. Because the end of humans on earth would be a return to normalcy for this planet, we really are a horrible species. Sadly, I don't see things getting better any time soon. Let’s get back to nature and appreciate it before it's too late.

The Chaos Aesthetic opens at Hashimoto Contemporary, San Francisco Saturday, May 4th with an opening reception from 6 to 9 pm.