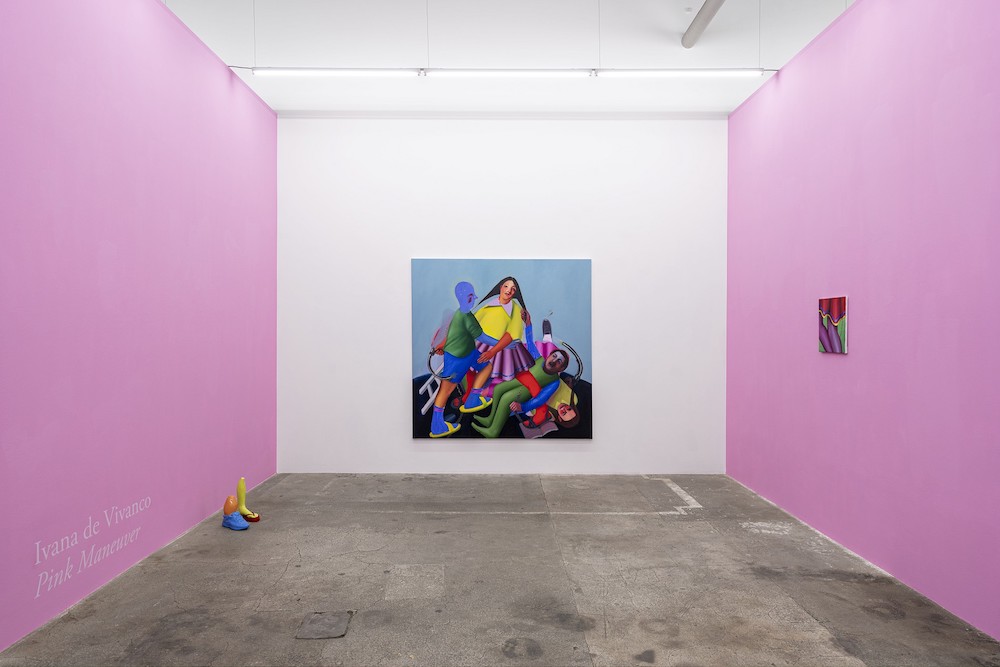 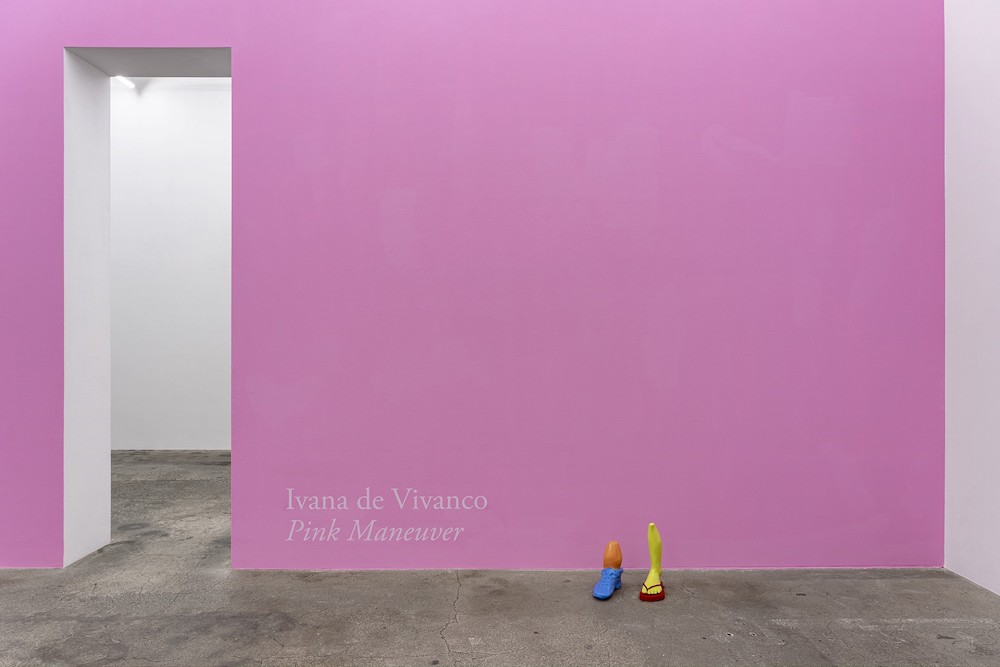 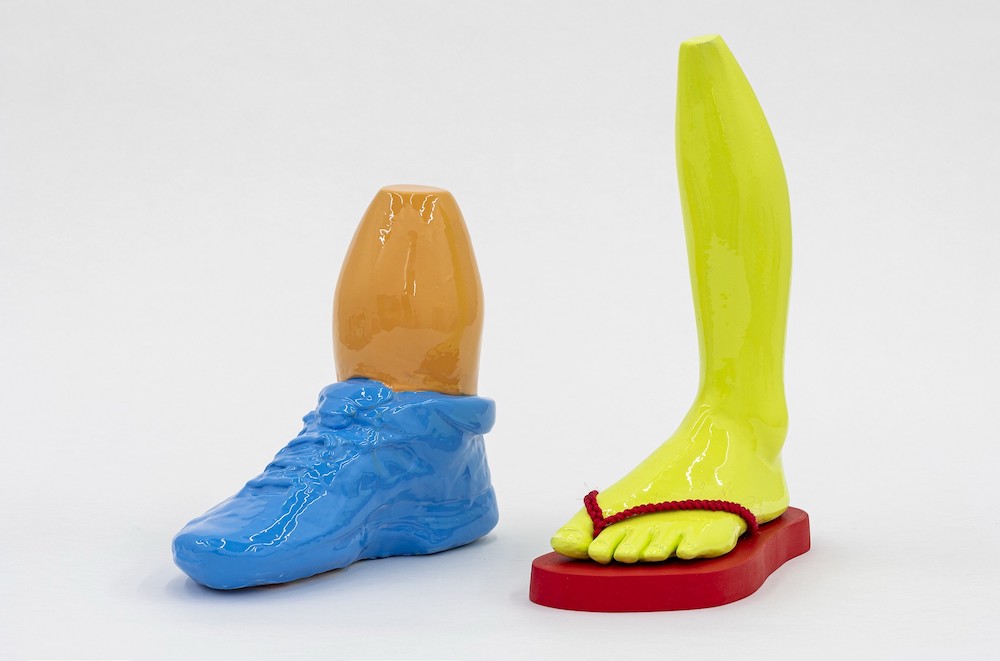 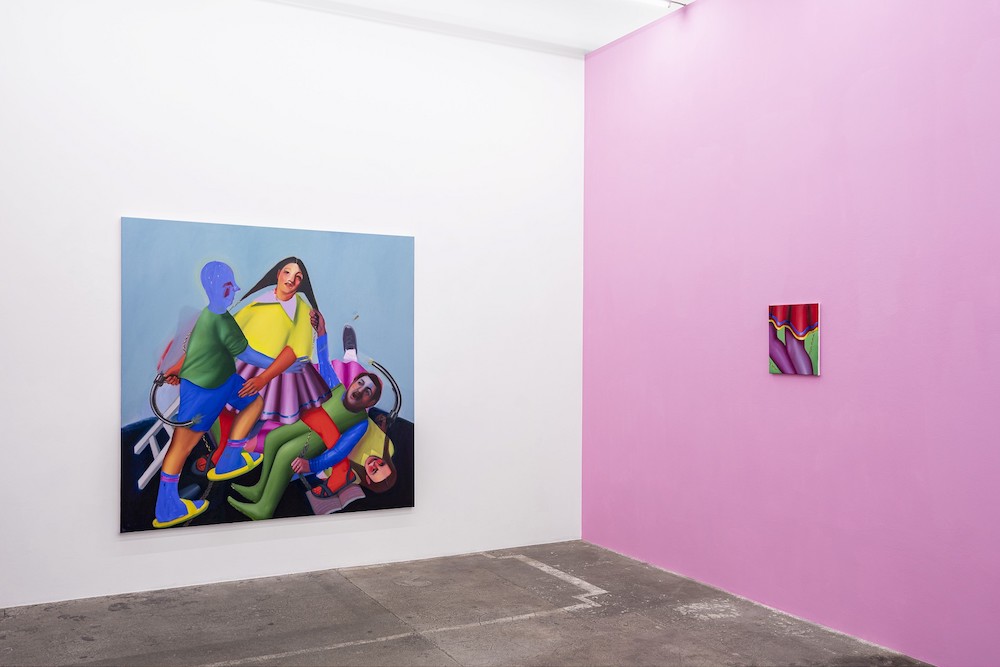 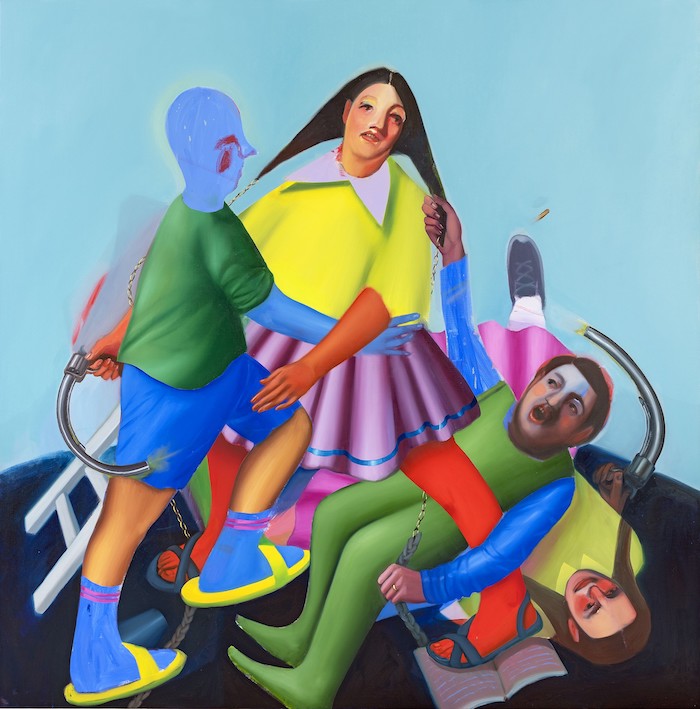 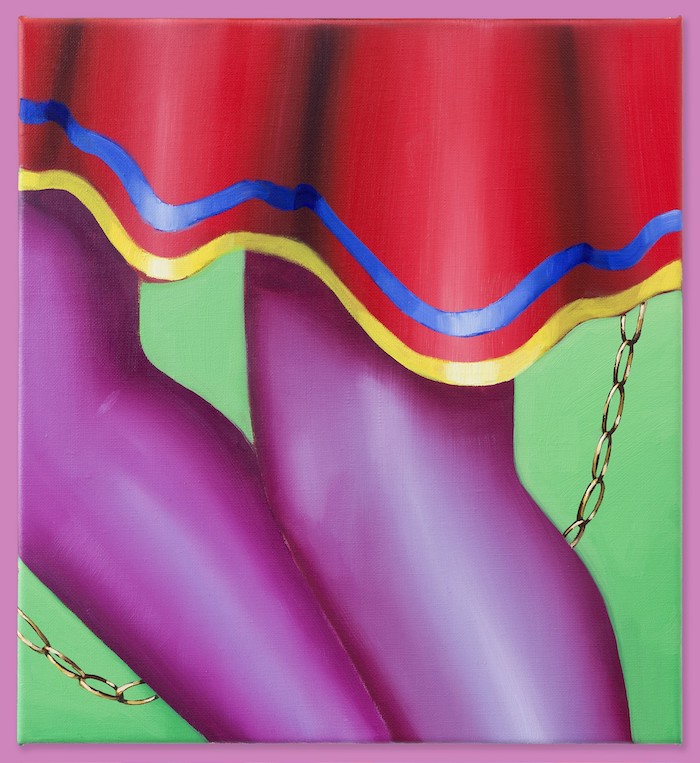 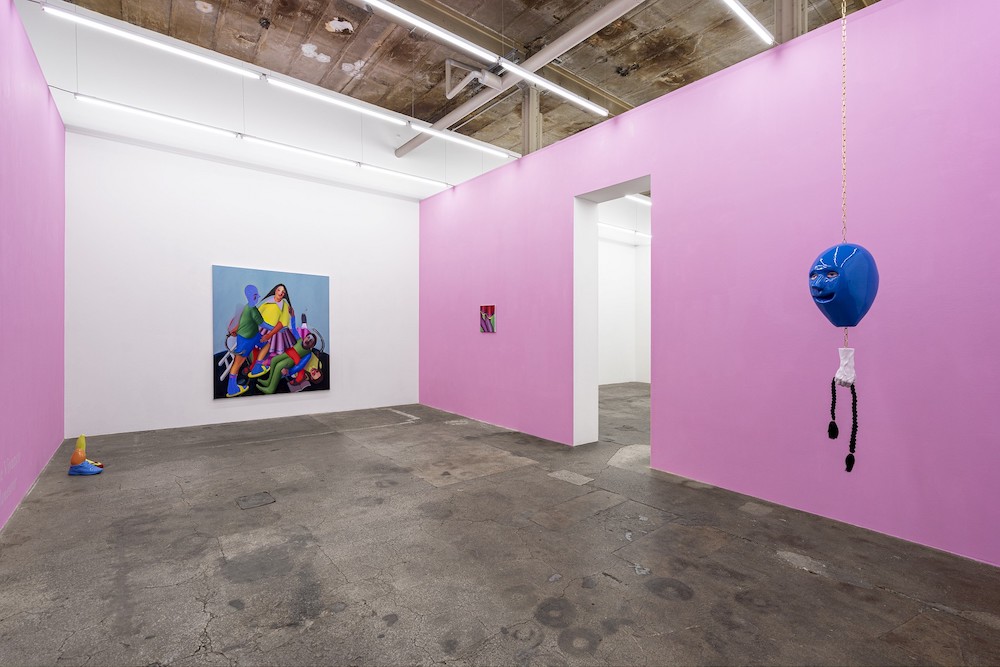 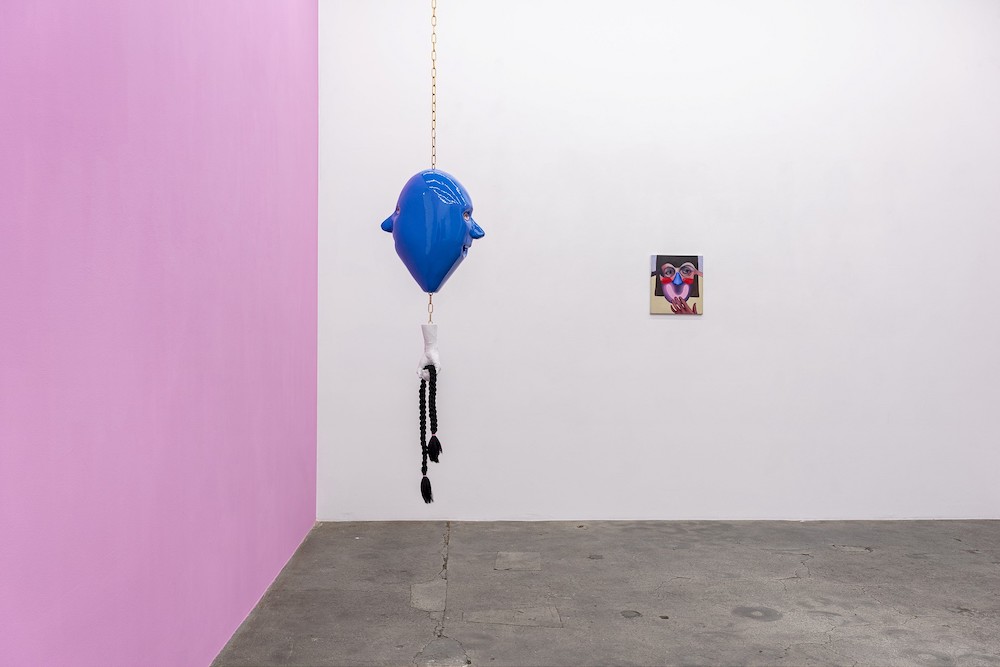 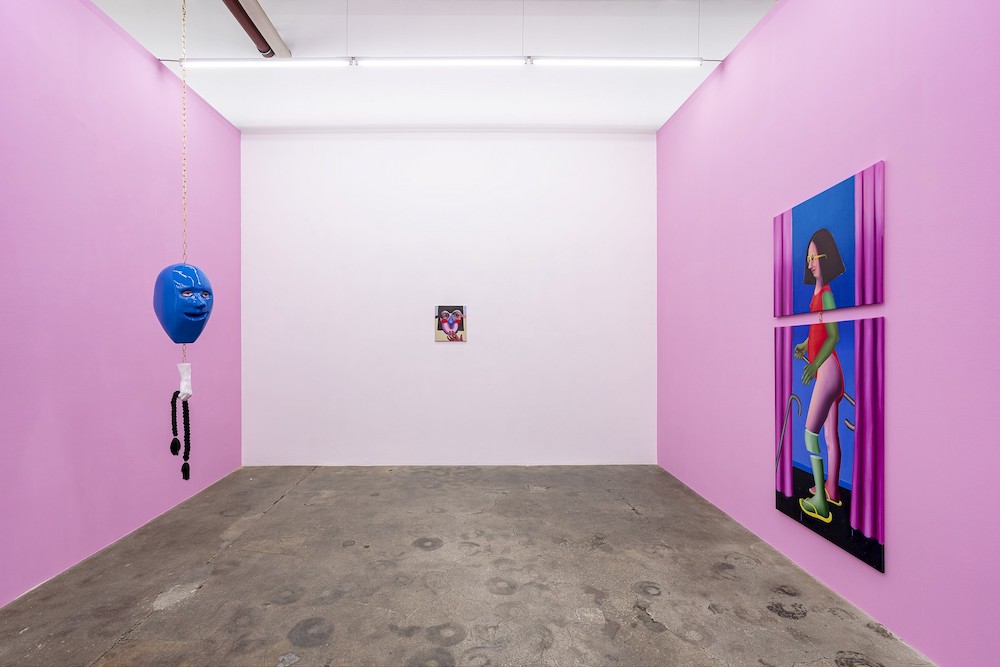 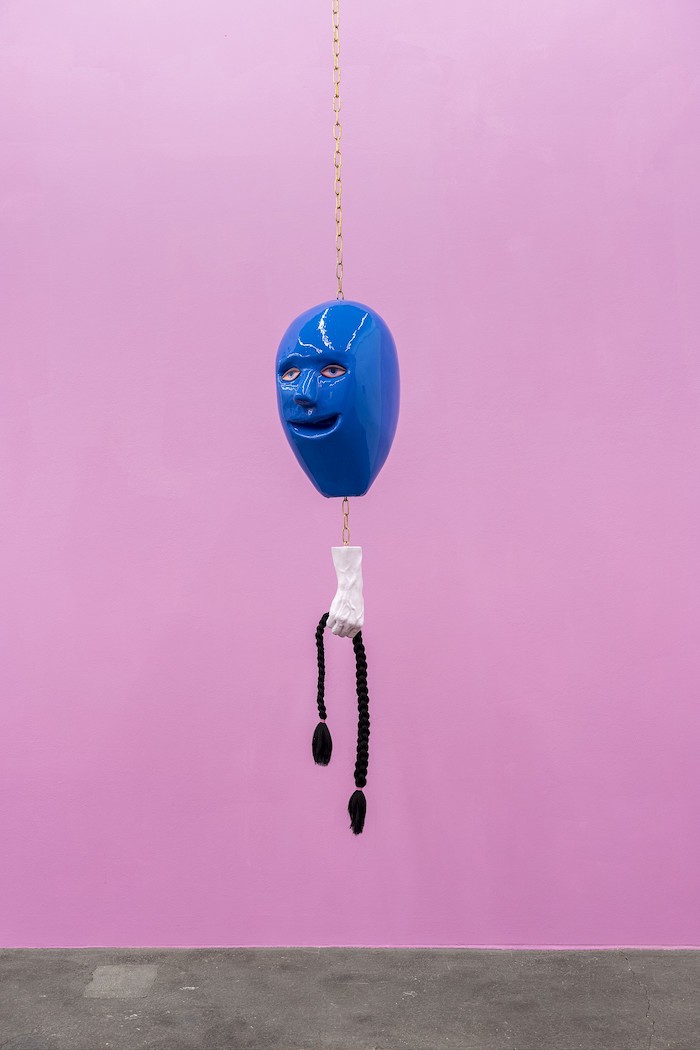 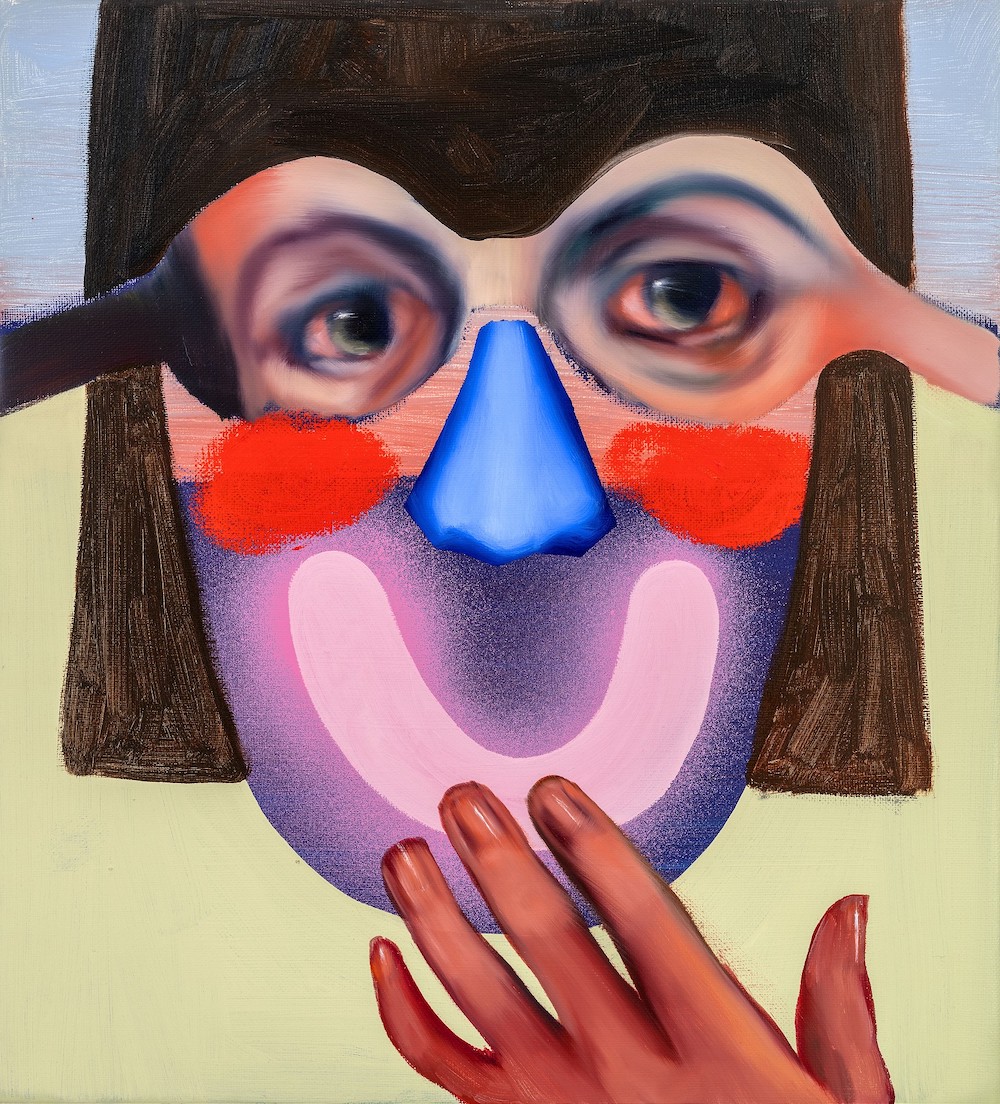 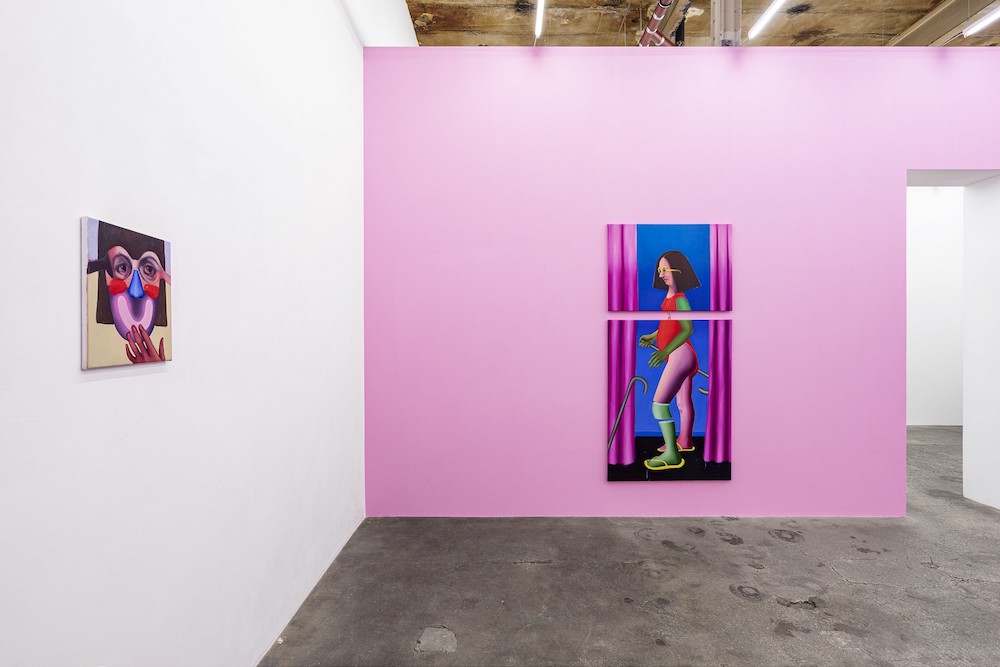 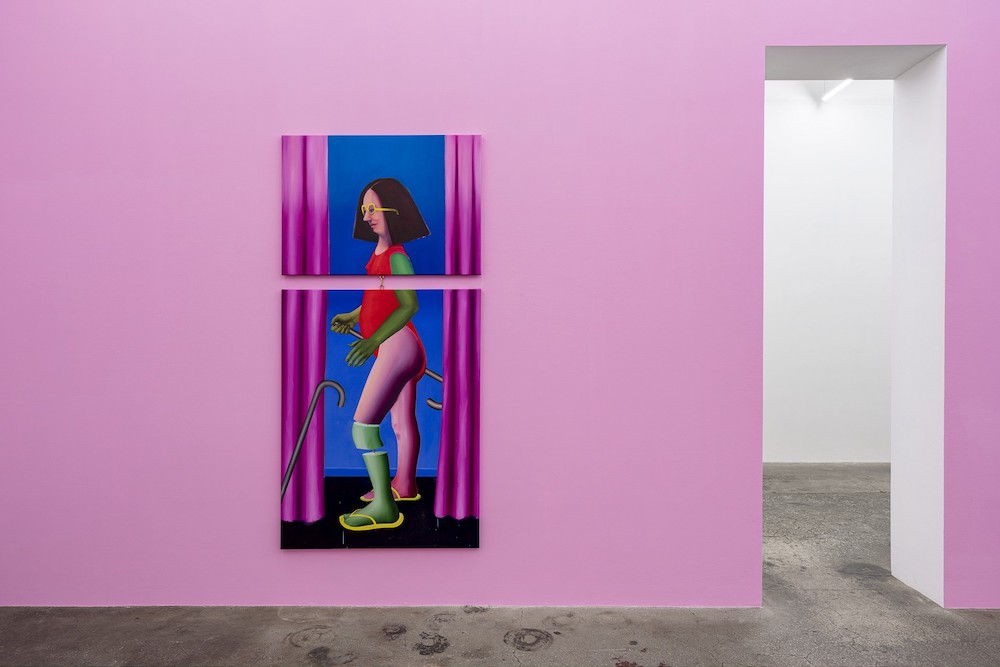 The Golden Triangle rule is intact. A brawl scene depicting a feisty rabble of colorful scamps tug at the braids of the woman centers the painting, as bendy guns shoot in every direction and socks n sandals clog dance over books strewn about. Irresistible vibrant colors, silly characters and silky surfaces on a large oil on canvas work anchor Ivana de Vivanco's new solo show, conceived as a critique on colonialism that continues to shape the modern world today.

"The pieces of my last years of work strive to give form to fragments of the stories of Andean history in South America," de Vivanco explains in the artist statement accompanying her debut solo presentation, Pink Maneuver, with Josef Filipp Galerie in Leipzig, Germany. "They are impregnated with the aesthetic of Latin American Baroque, which has been probably the most colorful and painful Baroque of all since the wound of colonization has remained inscribed in it." Born in Portugal, raised in Chile, and educated in Germany where she currently lives and works, the Chilean-Peruvian artist's life experience strongly informed her interest in the subjects that star in her surreal visuals, just as current surroundings have informed much of her approach. Based in the epicenter of what's recognized in the world as New Leipzig School, de Vivanco's figurations are built on traditional painterly techniques and are assembled from a diverse range of visuals, ranging from velvety surfaces to expressive marks and raw gestures. Often placed in spaces with an accented sense of perspective and regularly denouncing the rules of physics or logic, her images occasionally transcend into real life through  sculptural work which adds to the impact of such rousing images.

Entitled Ronda (meaning "loud" or "grand" in Welsh and Hebrew origin), the centerpiece of the show is the culmination of paintings and sculptures that form the exhibition. "Ronda has been an attempt to capture in one image something of this episode of history," the artist explains about this compelling image, referencing "the enormous discrimination it contains, and the circular quality of violence, in which gunshots turn back and generate whirlwinds." Bright blue skies and vivid details such as red socks or yellow sandals capture attention as they tug at emotion in playful elements ultimately lead to a sobering narrative.

"I thought of the total installation, with its sculptures, its paintings, and its pink walls, as an invitation to go through and question social conventions, anchored in gender roles or in the supposed supremacy of western European knowledge. I’m fascinated about how humor and also tragedy can live together in a work of art, with all the tensions that that generates," the artist shared with Juxtapoz, as she also explained how the smaller canvases and her sculptural works made from cement, synthetic resin, plaster, and hair, often provide closeups of the primary scenes. Whether with the balloon-like blue head character yanking one of the braids, or a closeup of knees under the skirt with a chain around it,  the artist creates emotional metaphors to interpret dark history. Through her poetic approach, de Vivanco repurposes the bright colors of Andean carnivals and the dynamic rhythms and movements of their parades to construct her own vocabulary. The traditional dances and celebrations that honor the sun and the rain are cleverly twisted and strangled to address the colonial cruelty and injustice that has shaped much of the world. —Sasha Bogojev