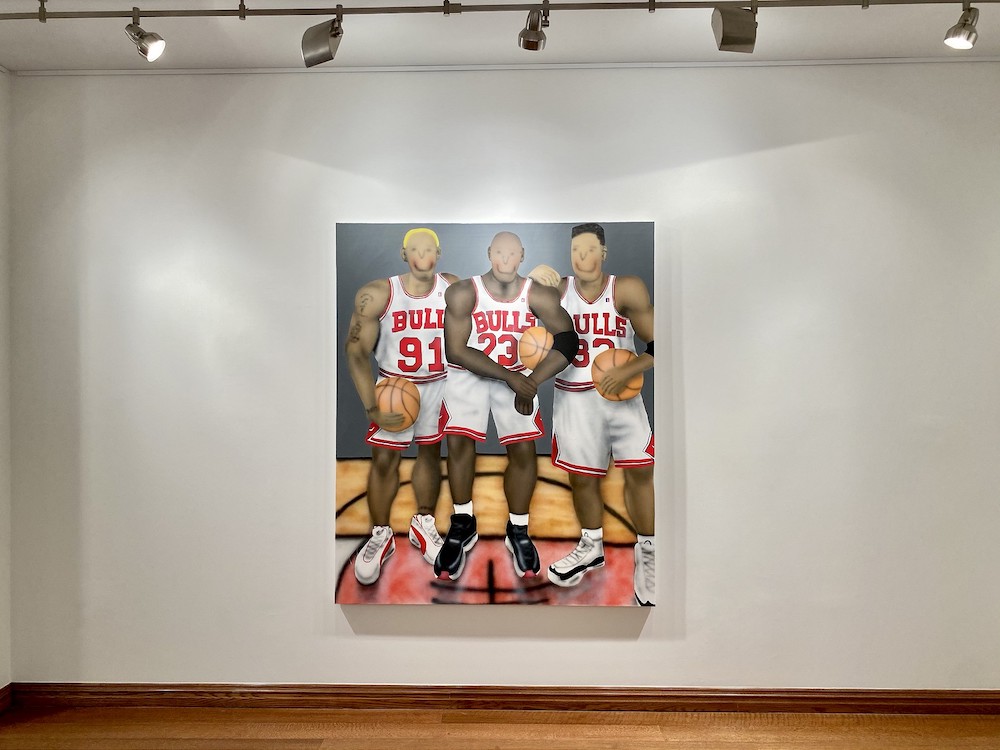 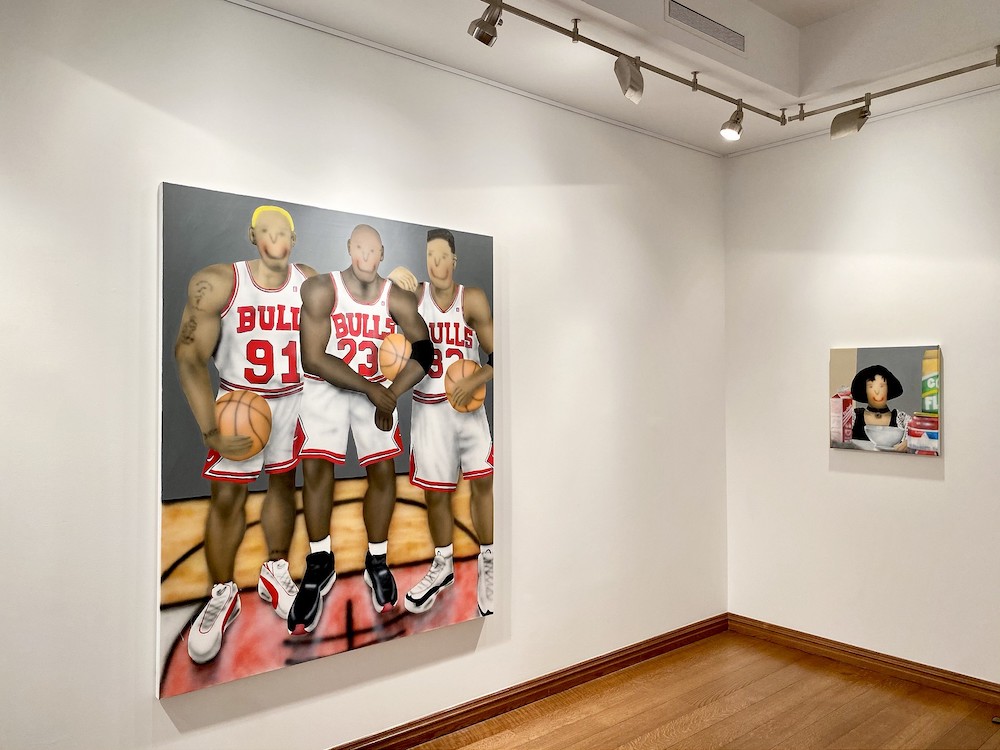 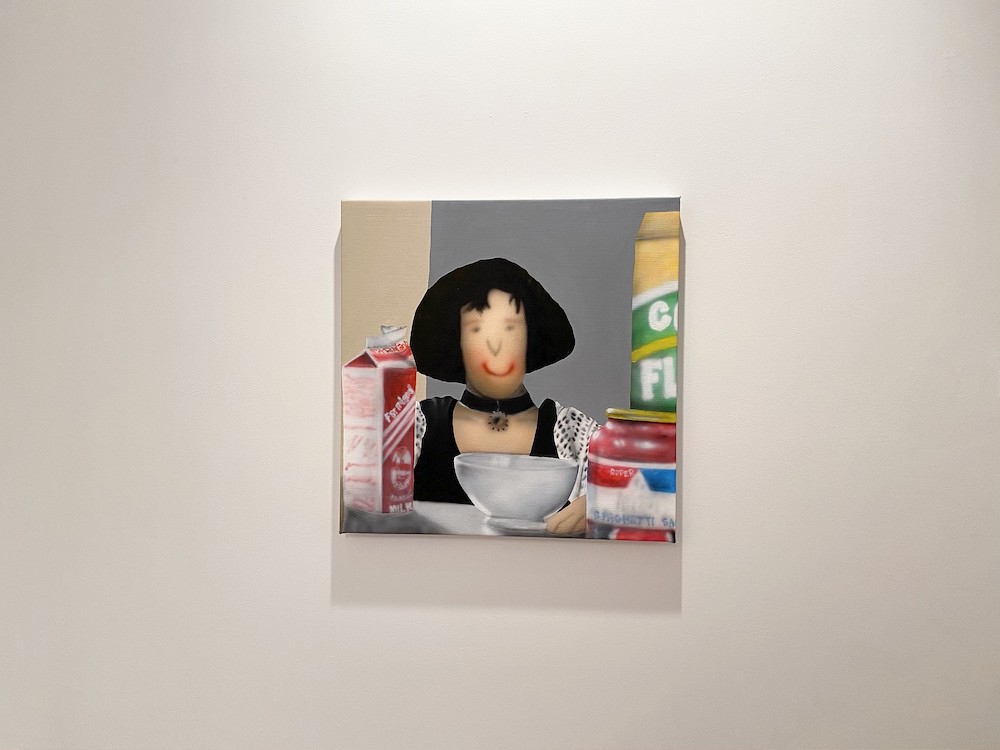 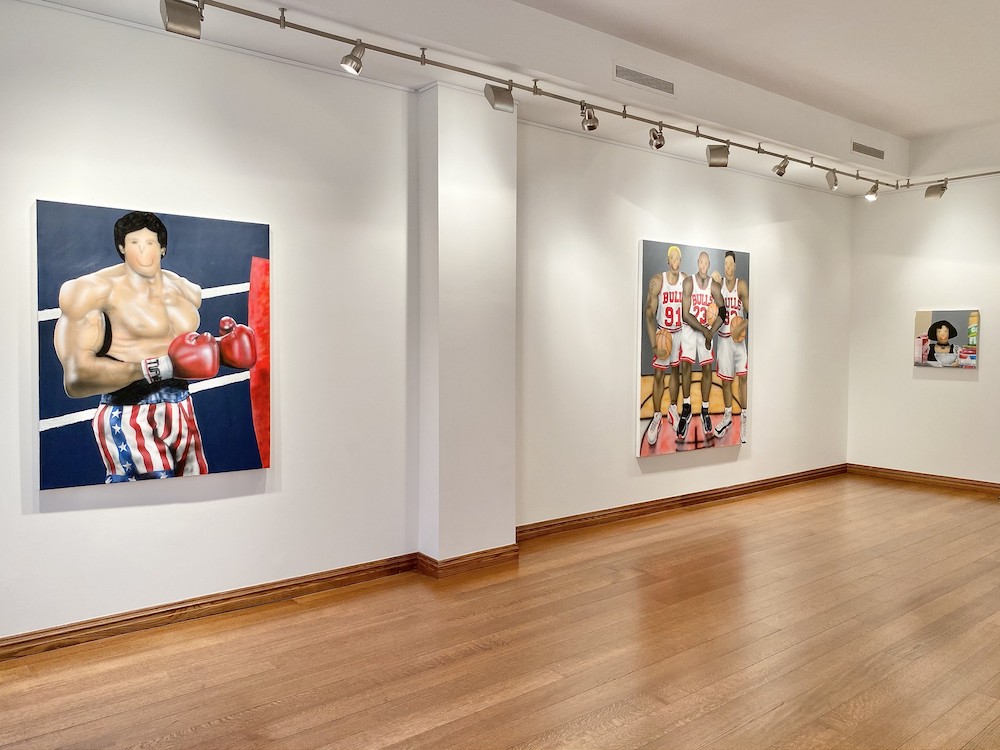 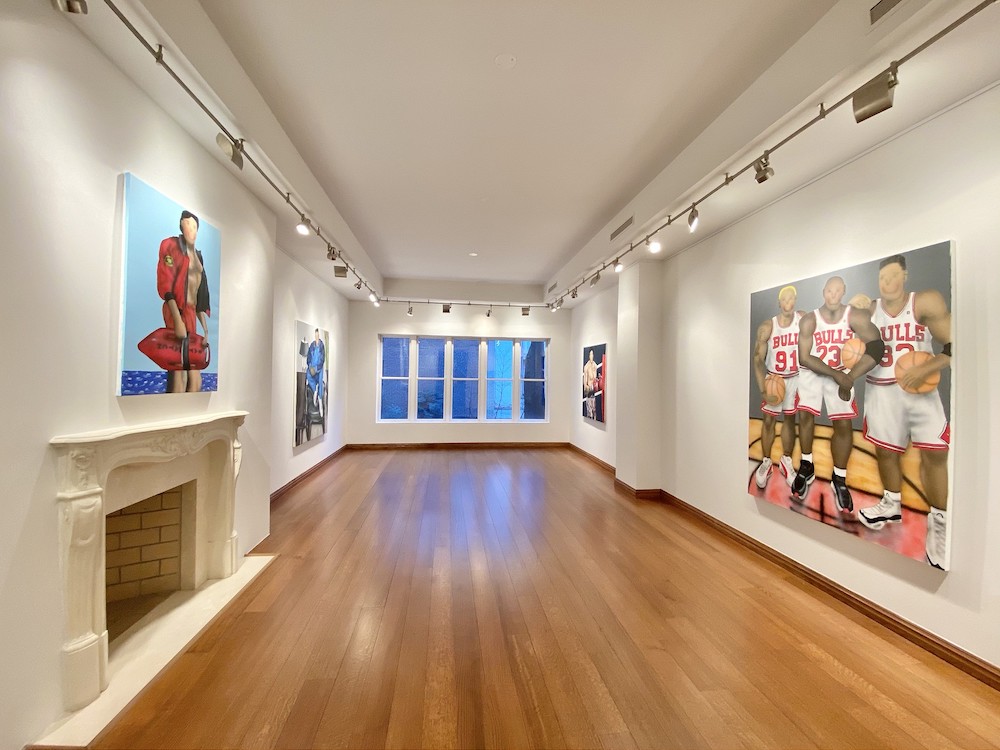 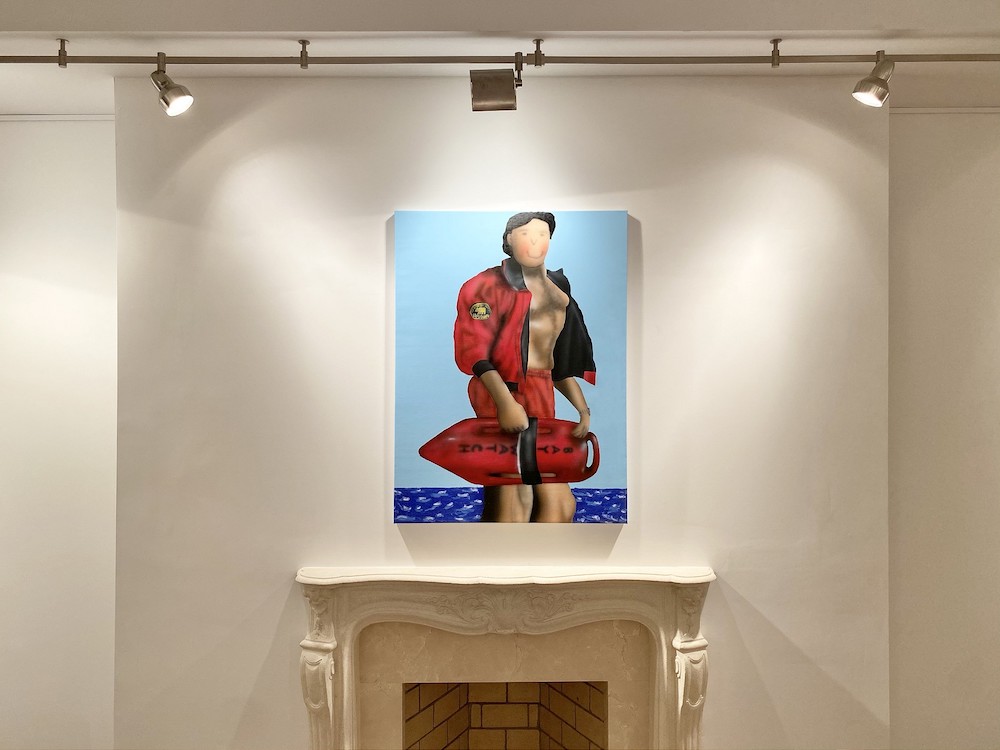 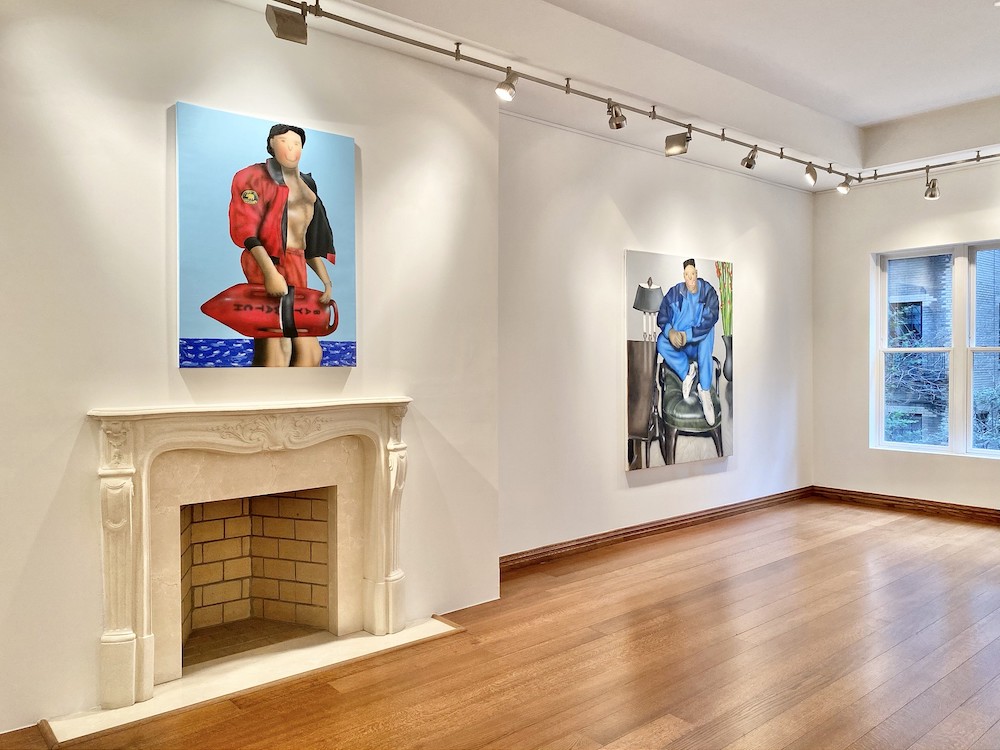 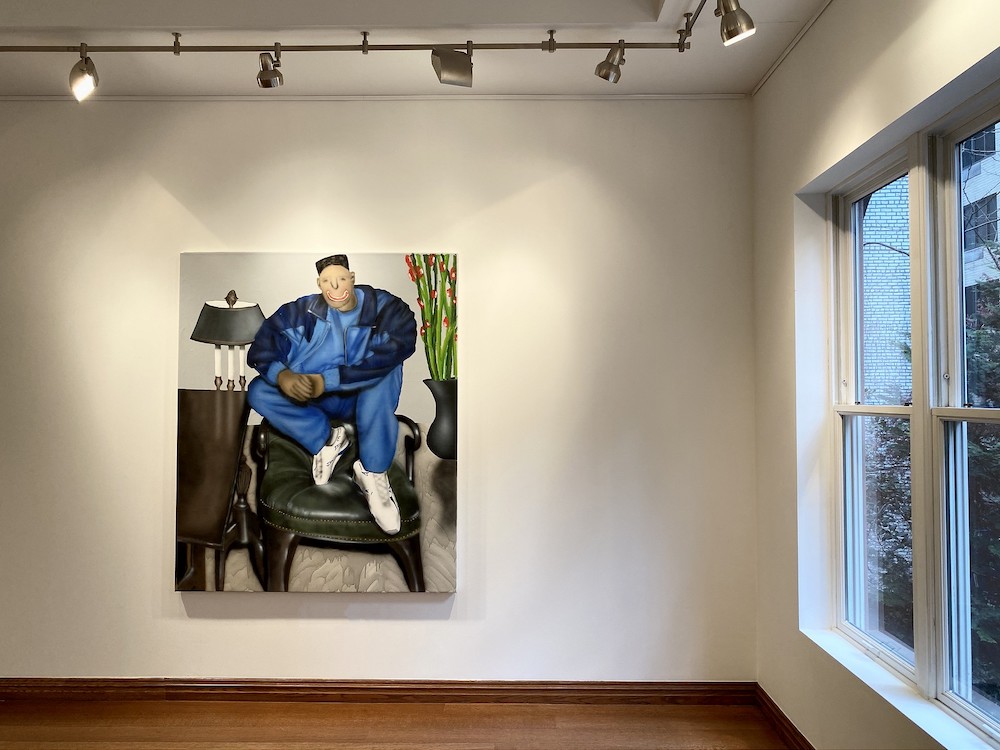 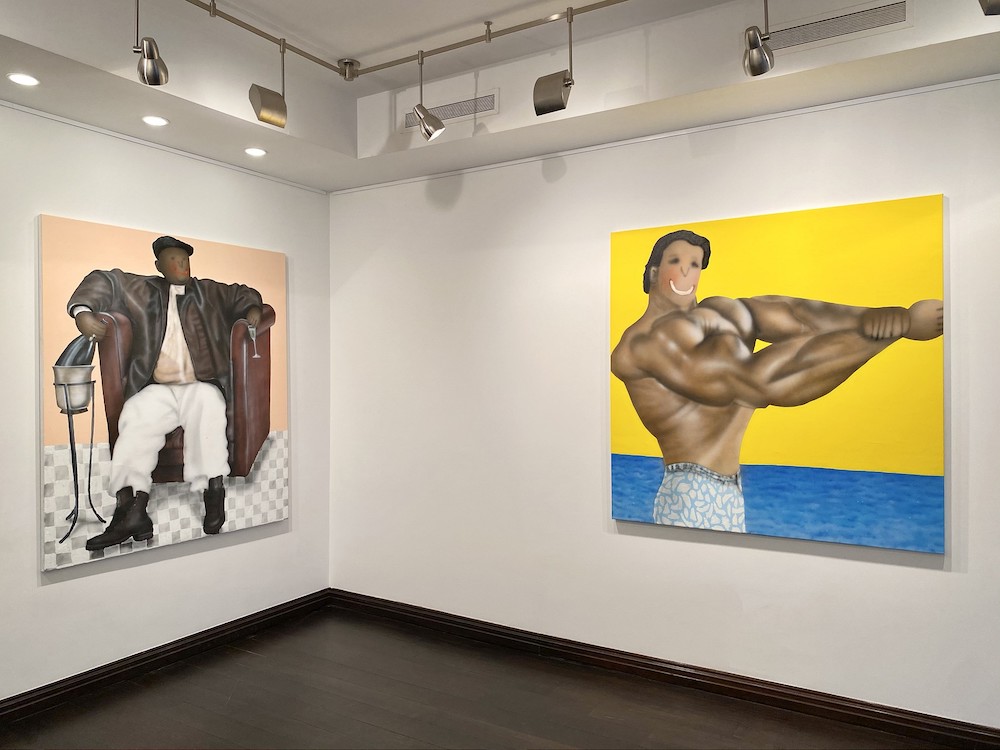 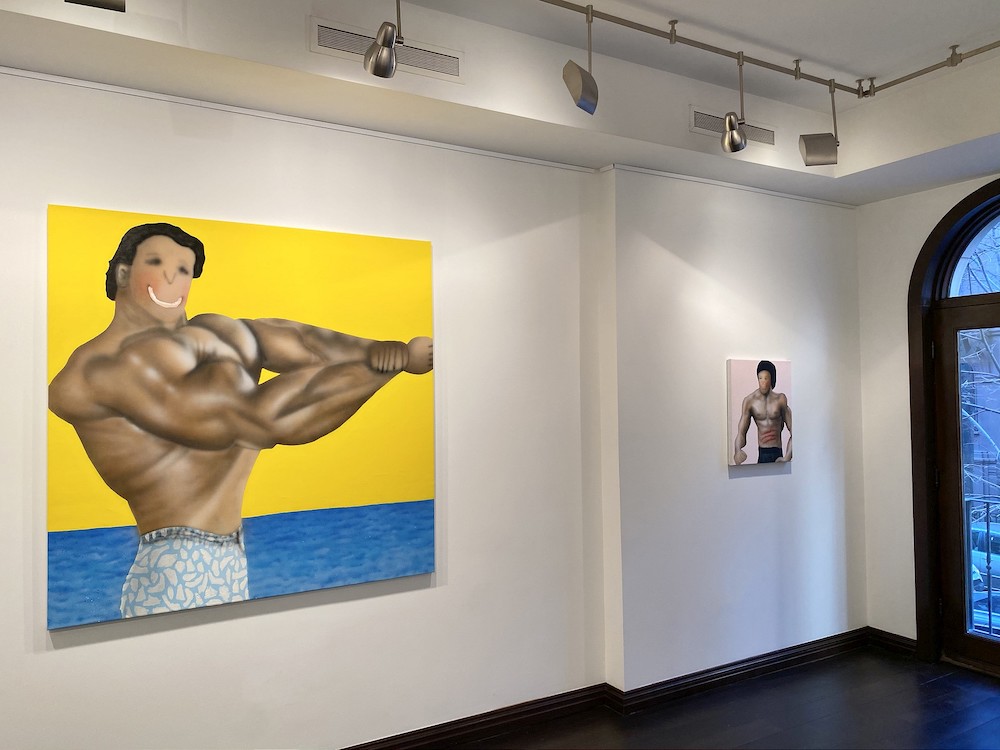 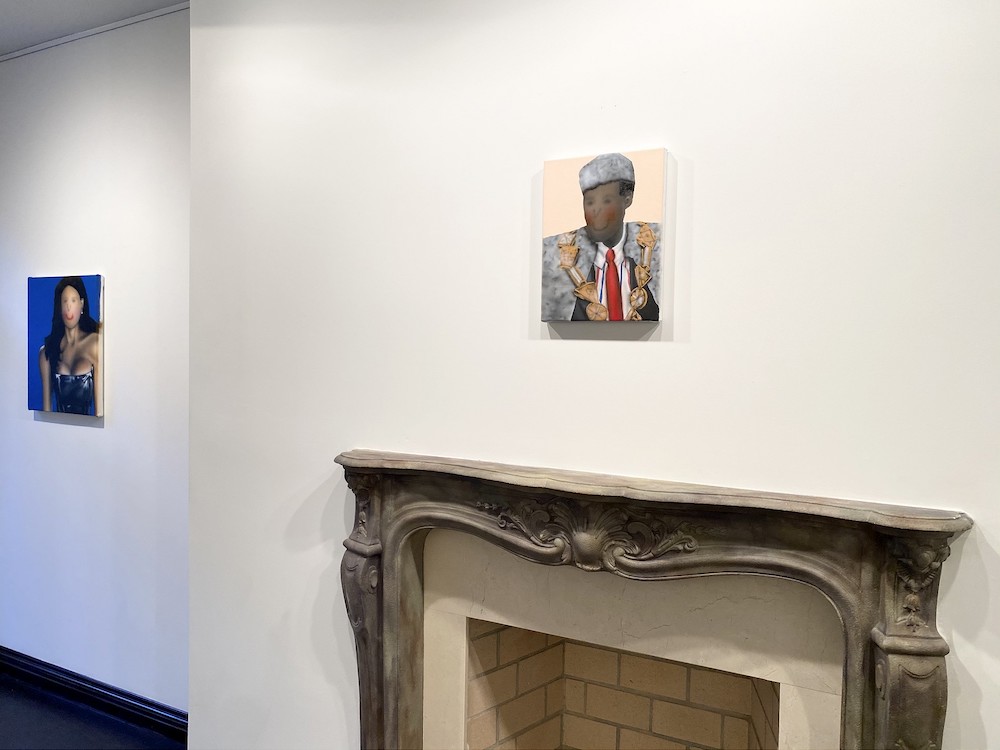 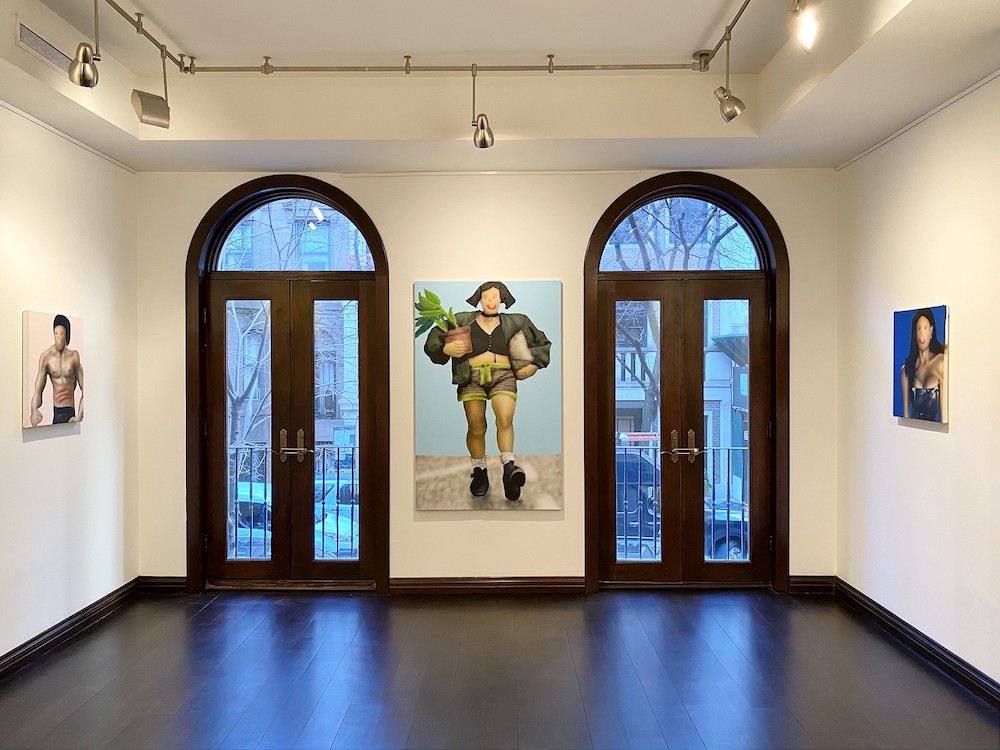 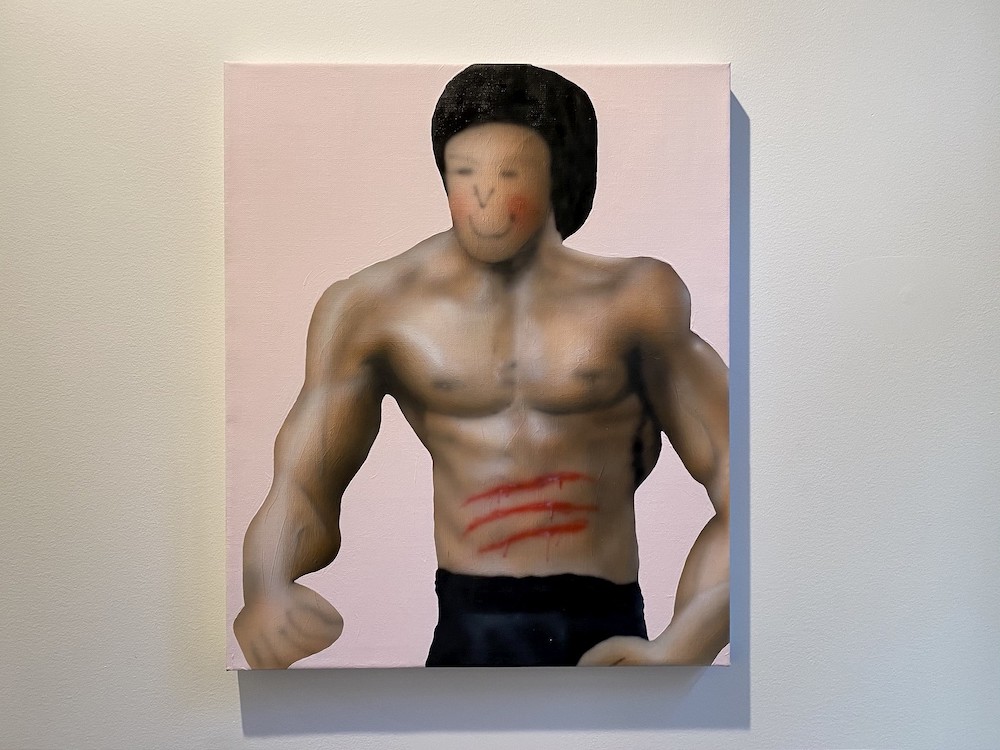 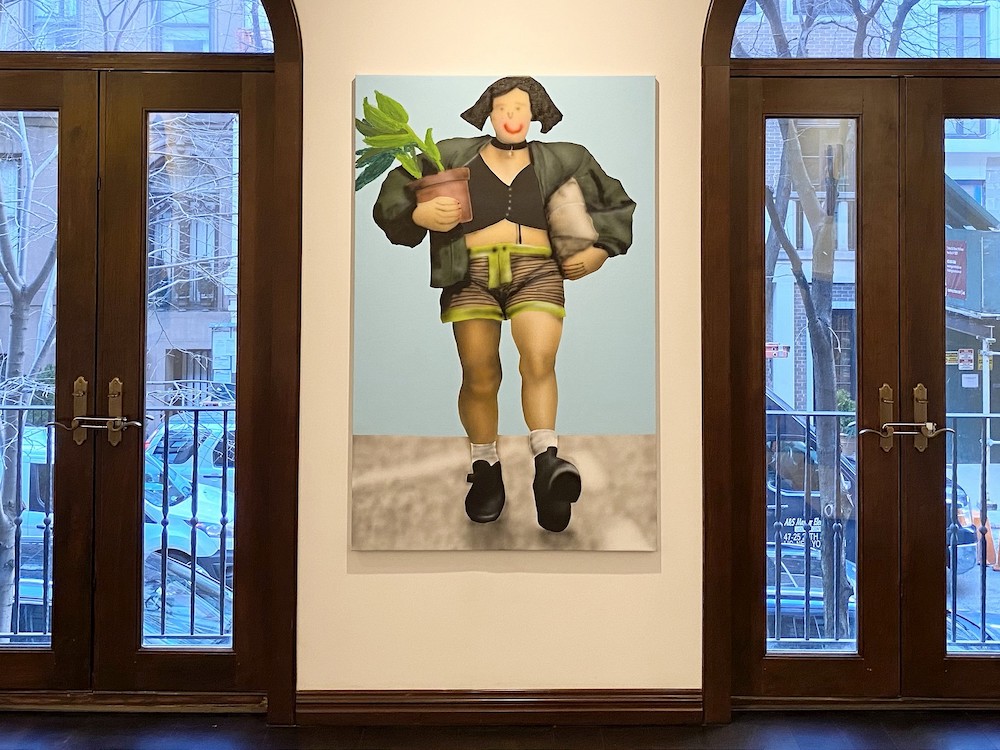 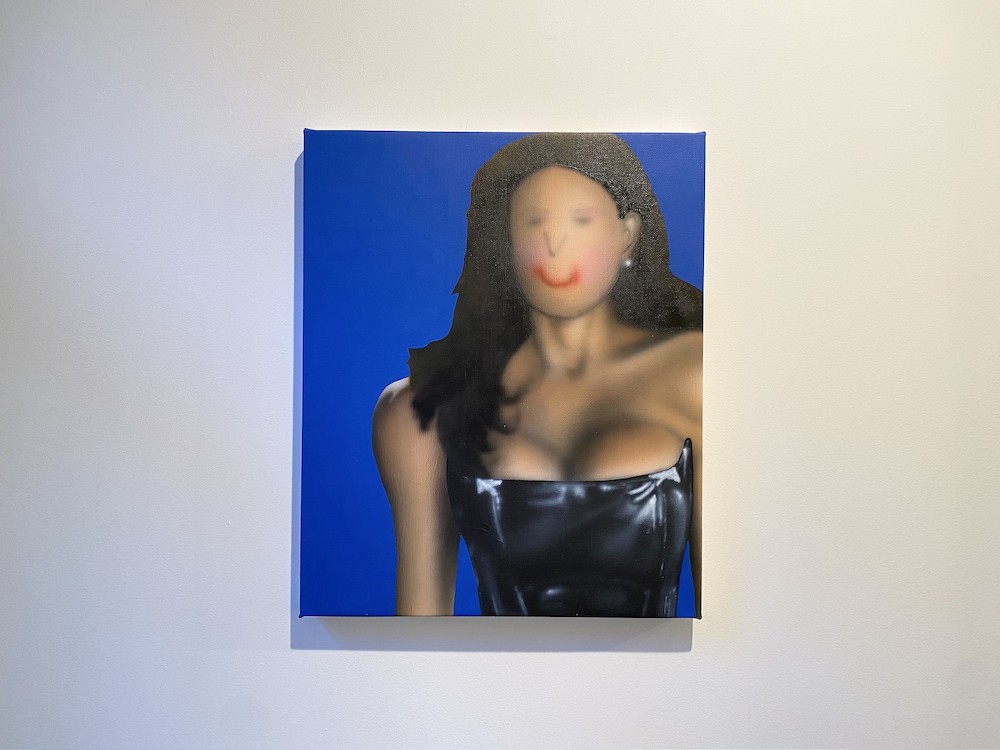 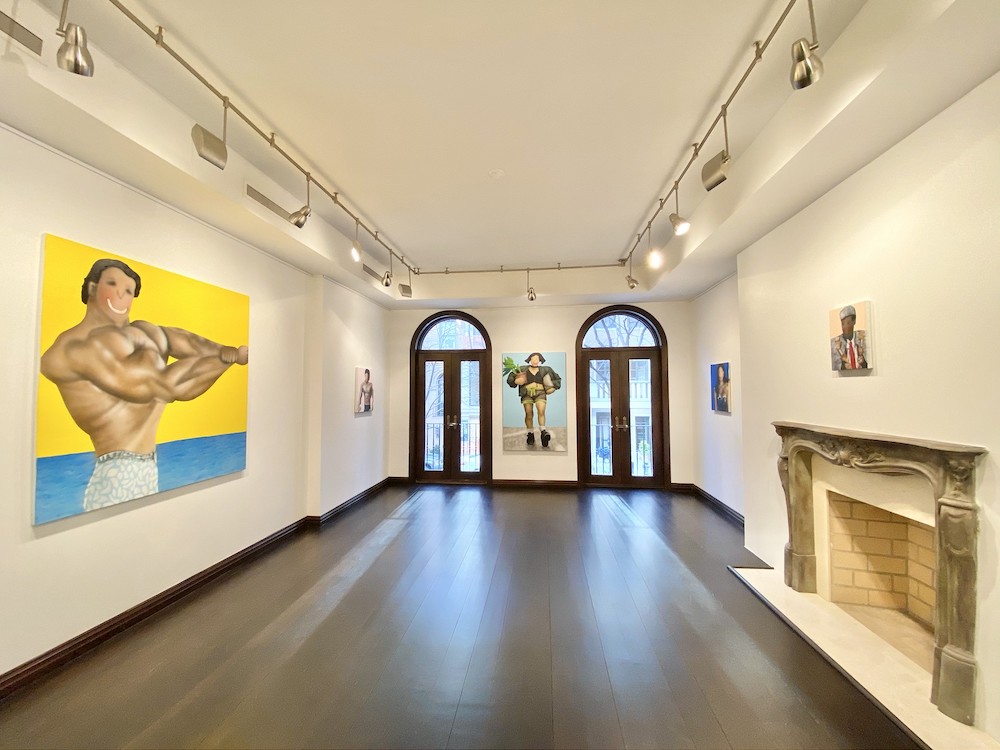 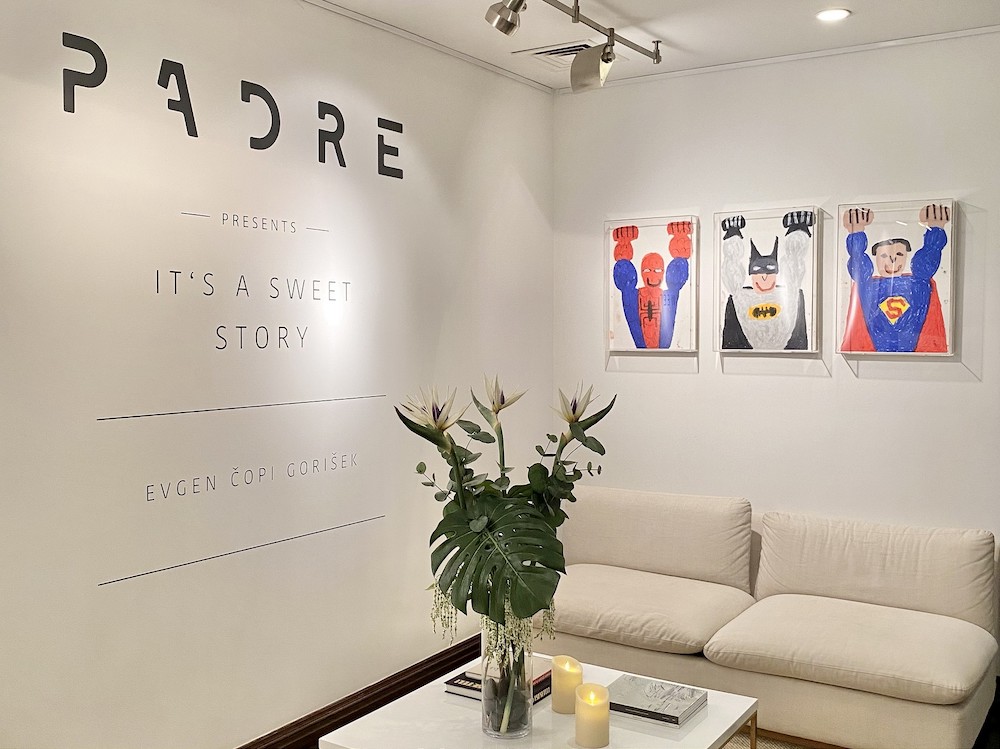 With the memories of my first trip to the USA in 2001 in the back of my mind, I can completely relate to the overall sentiment that permeates the body of work comprising It’s A Sweet Story, the American solo debut of Slovenian-born and Berlin-based artist Evgen Čopi Gorišek which is now on view at Padre gallery in NYC. Growing up in the ever-turbulent Balkan region right along the border of the European Union, the development of his identity was significantly influenced by the images and sounds he was exposed to throughout his youth watching movies, TV shows, and sports events, and listening to mainstream music. Most of those influences came from the United States of America, a country as perfect as one could imagine at the time, or at least it seemed that way from the other side of the globe.

Once the opportunity to visit the USA finally arose this year, Covid-related travel restrictions regrettably forced Čopi Gorišek to sit it out and let his work do the introduction for him. As for any other artist, his paintings and drawings serve as the channels to express his emotions and, poetically speaking, they are an extension of his own physicality. In this respect, having his art on display in the cultural, financial, and media capital of the world, felt like a decent compromise. As an outsider trying to make a connection with another culture, Čopi Gorišek was set on producing a body of work that manifests his closeness and association with this familiar, yet unknown world. And this is where turning to his childhood memories and conveying the feelings he experienced as a young boy, became crucial in his creative process.

A series of paintings and drawings he created for this exhibition features imagery that is both iconic in the US and significant for him personally. Whether it’s Silvester Stallone as Rocky Balboa in the boxing ring, Natalie Portman as the 12-year-old Mathilde in Léon: The Professional, Will Smith as the ever-cool Fresh Prince of Bel-Air, or Scottie Pippen, Dennis Rodman, and Michael Jordan as the unstoppable Chicago Bulls’ trio from the 1990s, these portraits serve as a vernacular through which the artist makes his symbolic first contact with the local audience. “If there is one movie that sums up the way I feel about my debut here, it is Coming to America − I’m as excited as Prince Akeem [Eddy Murphy] was when he arrived in the States for the first time.” And yes, the portrait of the ecstatic prince is also included in the show!

Considering that both his style and subject matter are influenced by the current-day reality, Čopi Gorišek is able to transform the intense saturation of our senses into a mutilated travesty of itself. As conflicting as the love-hate feeling about having a solo show in NYC but not being able to see it in person, his images are jammed with contrasting elements and clashing technical approaches. On the one hand, they are dominated by the shiny, seemingly smooth surfaces rendered through the extensive use of spray paint and airbrush. On the other, those portrayed are encapsulated in a fantasy-like blur which, moreover, is constantly disrupted with razor-sharp edges, vibrant colors, and the smudgy marks of oil sticks.

Believing in the healing and empowering potential of happiness, Čopi Gorišek insists on using the wide grin regardless of the atmosphere or situation his characters are in. And whether or not the depiction of his heroes as grotesque, smiley caricatures of themselves is meant as a critique of the superficiality of the American entertainment industry, or perhaps of American pop culture in general, is something he leaves up to the viewer to decide. In the end, painting childhood heroes surpassed the mere idea of constructing a common language as the impact of these role models has permeated the artist’s entire life, becoming a pillar of his life story. And as Čopi Gorišek himself admits, It’s A Sweet Story. —Sasha Bogojev