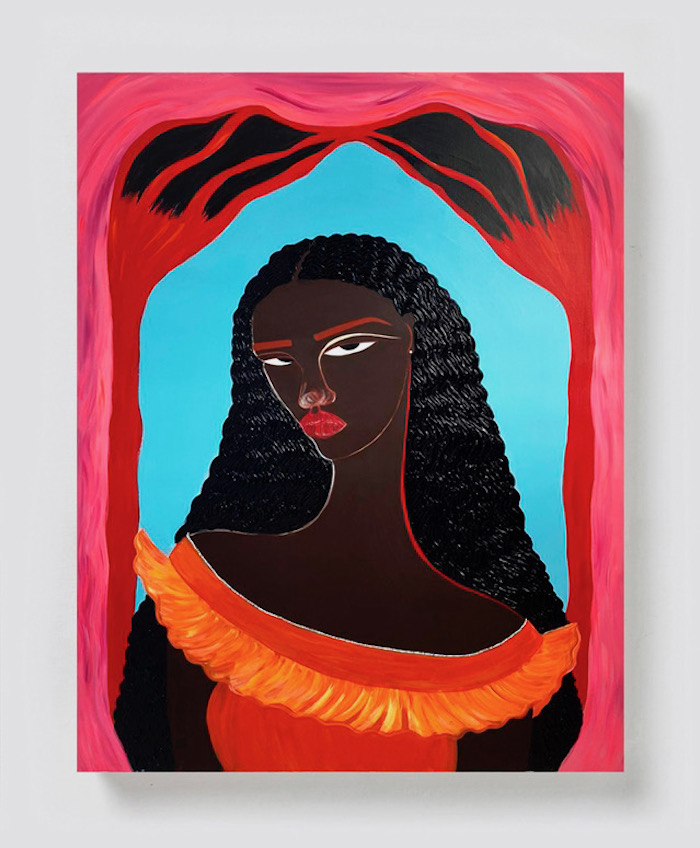 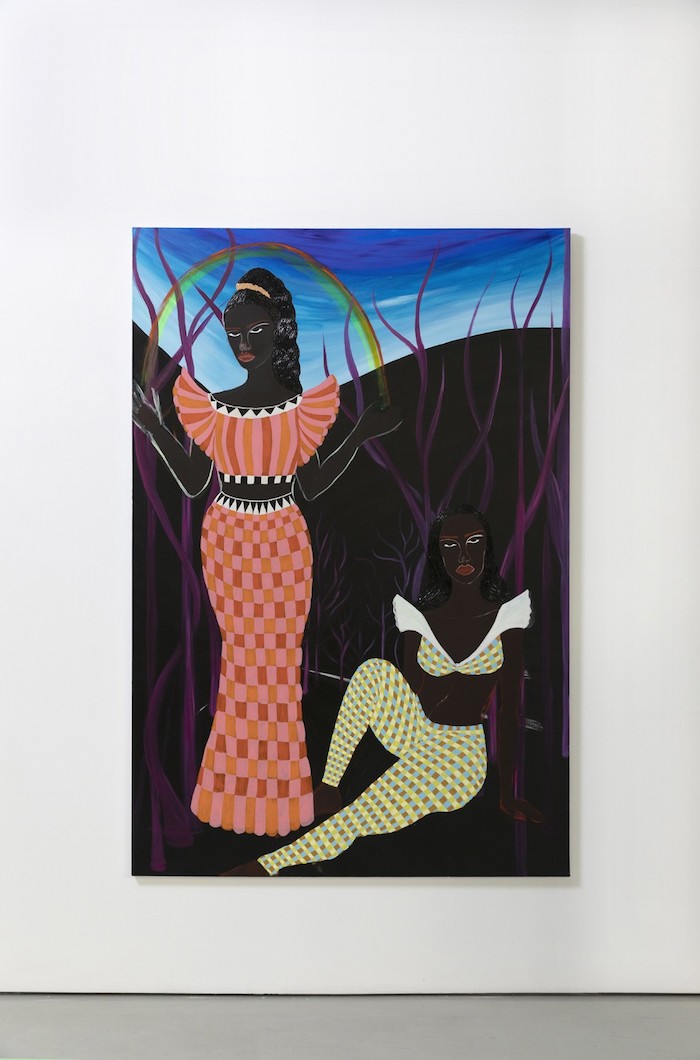 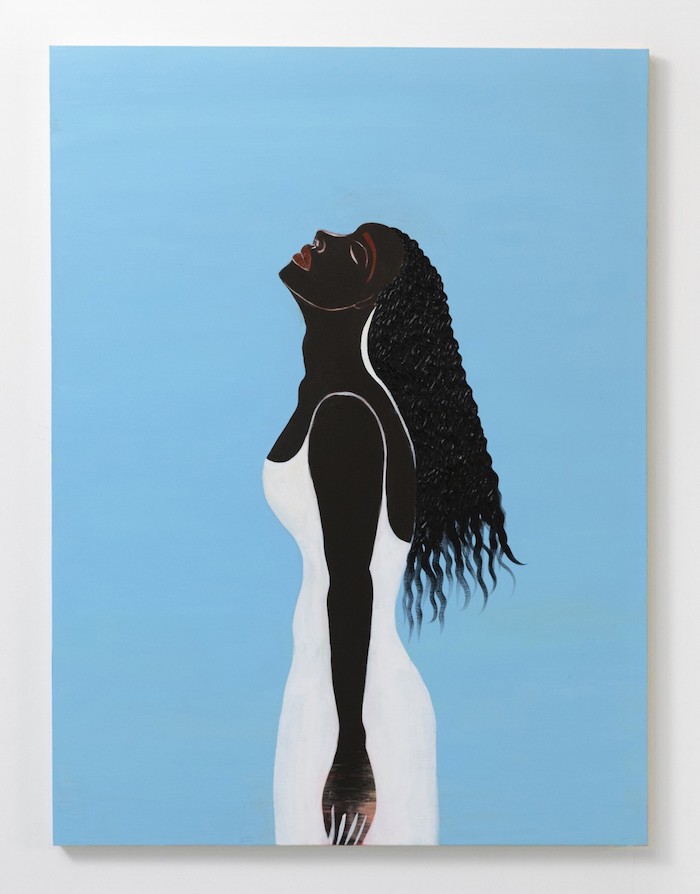 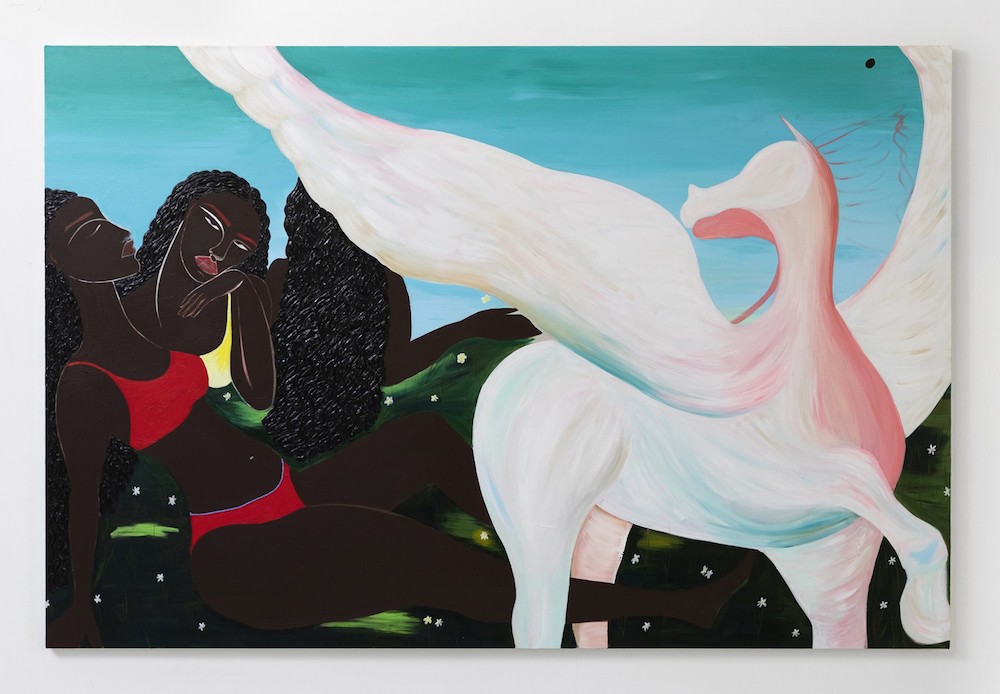 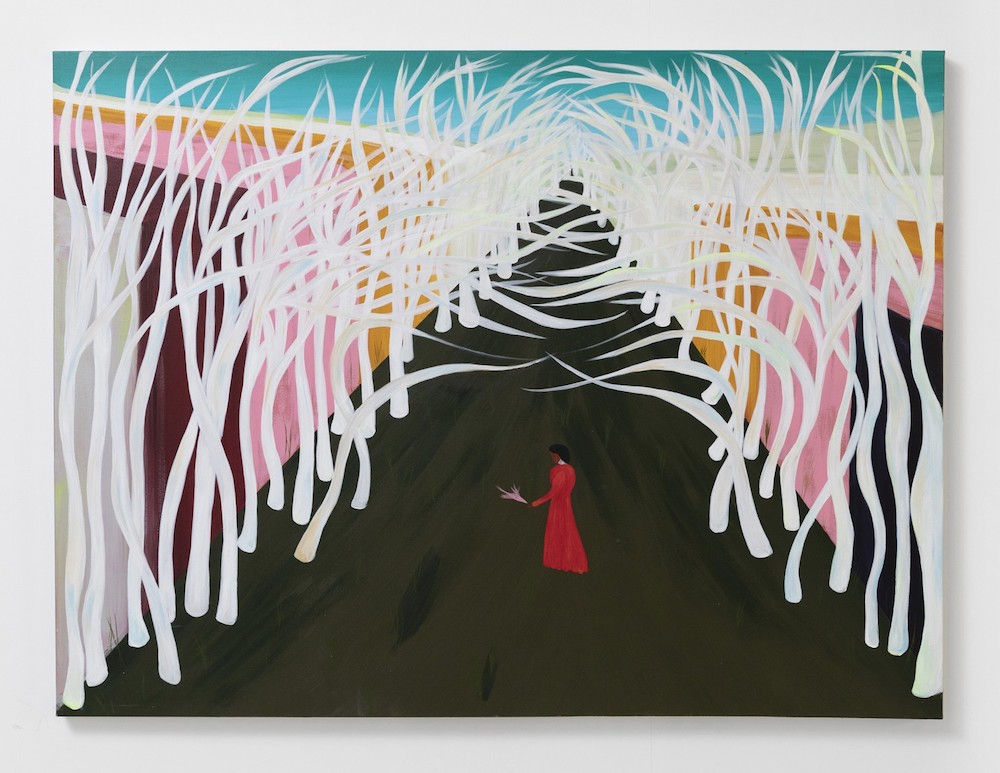 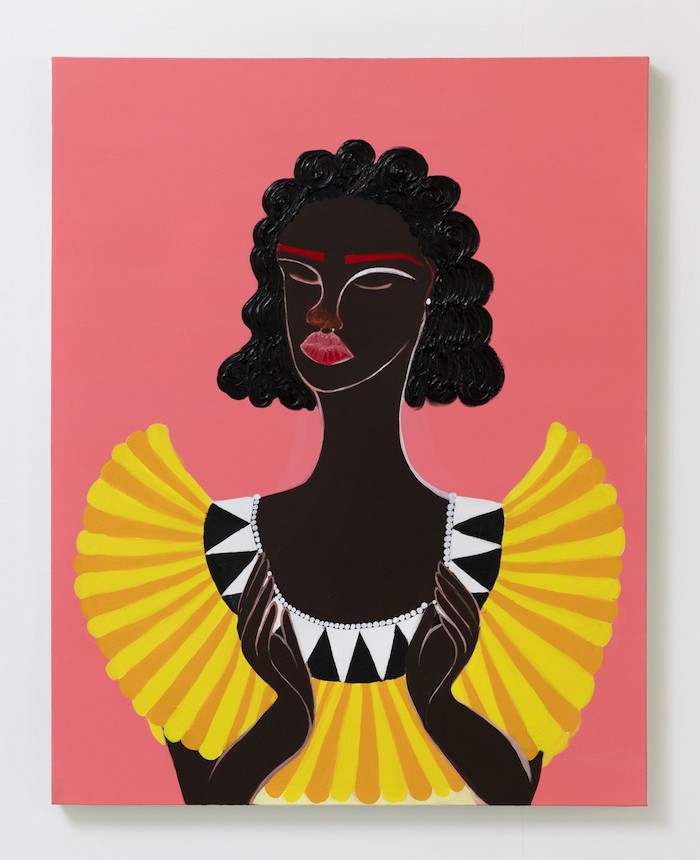 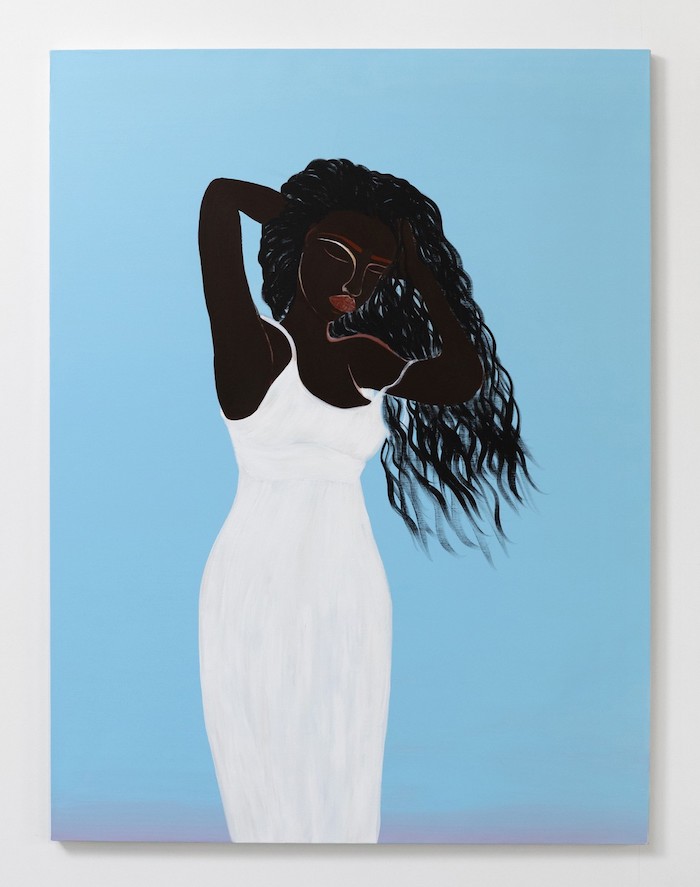 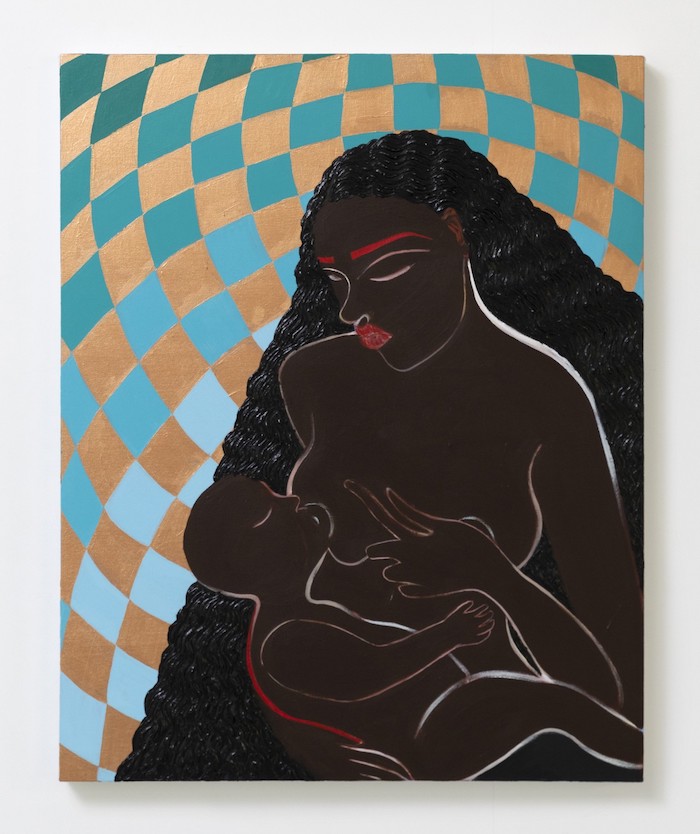 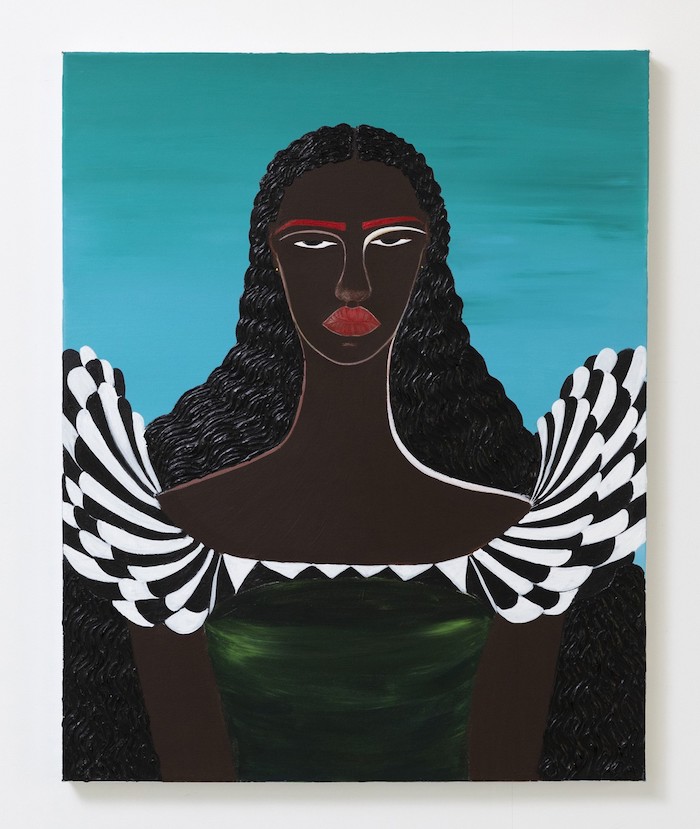 In Turin, from 28 January to 27 February 2021, Luce Gallery presents the solo show of Delphine Desane titled Dreams of a Dreamer. Born and raised in France to Haitian parents, the artist reflects on black womanhood and motherhood drawing from her own life experiences. The subjects of her paintings—mostly women, are portrayed with minimal details and eyes full of expression against colored backgrounds, which exalt their inner state of mind.

Researching, blending and fusing disparate cultures, periods and moments, Delphine Desane uses her practice as a vessel for self exploration. The brush is a vehicle for understanding. Her simple forms contain multitudes. They speak to a single moment, packed with emotion, memories, longing. A single line acts as a marker for realizations, loss, and labor. Desane’s portraits are direct, intentionally unembellished, quietly referencing the shapes and figures of known and unknown ancestors. Only after completion do influences present themselves to her - the pointed chin of a Dan Mask, the flattened scapes of the Obin family’s practice (Philomé Obin in particular), and the graphic qualities of Ghanian Asafo Flags. Bold and clear, her portraits are purposefully impersonal, so as to not limit their message.

In Desane’s first solo show “Dreams of a Dreamer”, landscape provides no home to the artist's cast of characters. Instead they must find roots on their own. These roots find fertile ground in the memory of the viewer, growing slowly into something that can’t be ignored. In her three years as a practicing artist, Desane has seeded themes of displacement, home, birth and regeneration. Her steady hand relays a grace and conviction central to her person, depicting mostly female, sometimes animal characters, with pieced together identities, both connected to and separated from the Earth. Her generally minimal backgrounds are “an open question,” allowing the viewer to imagine her figures almost anywhere. What multiplicities exist within her subjects are held in the eyes. The truth rests in an iris, but is only accessible to those willing to look directly at it. Like the artist, these figures refuse to be boxed in.

Desane’s subjects live outside of time - a child, a mother and a grandmother all at once. Lineage is held within a single husk - an impossibility in our physical realm. Desane’s figures are not defined by their past, present or expected future, respectively, but encapsulate all that they could be, all that they are, all that they were, in one explosive moment. “No matter where you go, the first thing people see is your blackness,” says the artist, and so, that is often the only clue given to the viewer - a reclamation of agency.

Drawing on the surrealist and religious themes in Hector Hyppolite’s paintings (a peer of Andre Breton) and the perceptive black and white photographs of Katsu Naito and Seydou Keita, Desane creates ever-extending narratives that seem to grow and move as you witness them. There is something ancient in these paintings. Like the figurative etchings on Greek Amphora or the portrait on an agate cameo, “I’ll Open My Sun-Filled Heart to You” shows us a figure thrown into relief, passion shown in her stance alone. In “Promised Land” we see a traveler nearing the end of her journey. Nature folds in on her as she moves, protecting or restricting.

At this early stage in her career Desane’s oeuvre speaks to the scores of experiences she has weathered at each stage of her life as a Black woman. Her canvases are related to each other in their anonymity. One consistent feature is the artist’s use of blue, valued because it is “synonymous with infinity.”

In “Dreams of a Dreamer”, Desane brings together the latest body of works, simply rendered, and sensitively offered. The paintings shown detour from Desane’s previous works in their ambition, easily traceable through their growing size. The artist is beginning to connect the dots between her personal history, imagined future, and the myriad identities of her people. She reaches for something that is purely her own and in so doing excavates the many inescapable influences that inform her dual cultural identities (Haitian and French). Dreams of a Dreamer is one long, never ending, waking dream. A chosen dream. One in which the message is revealed and the messengers are hidden. —Camille Okhio