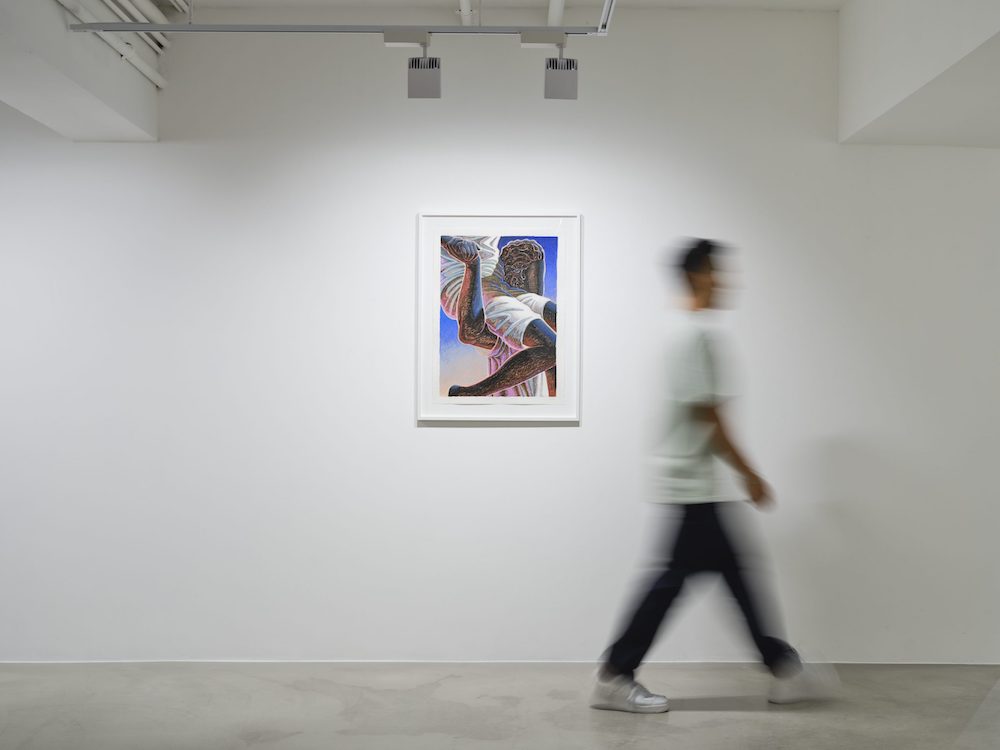 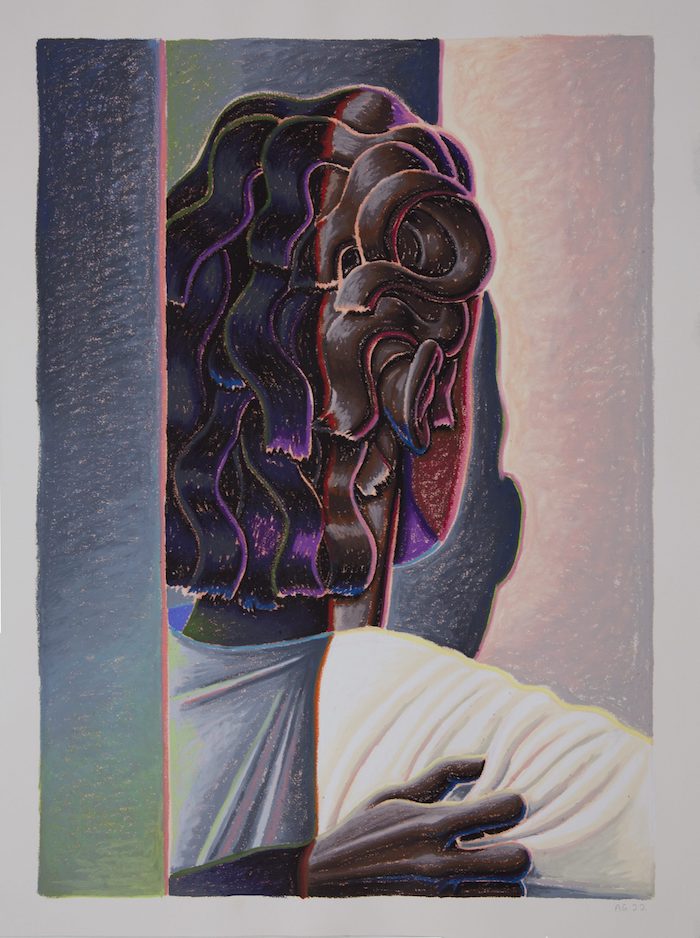 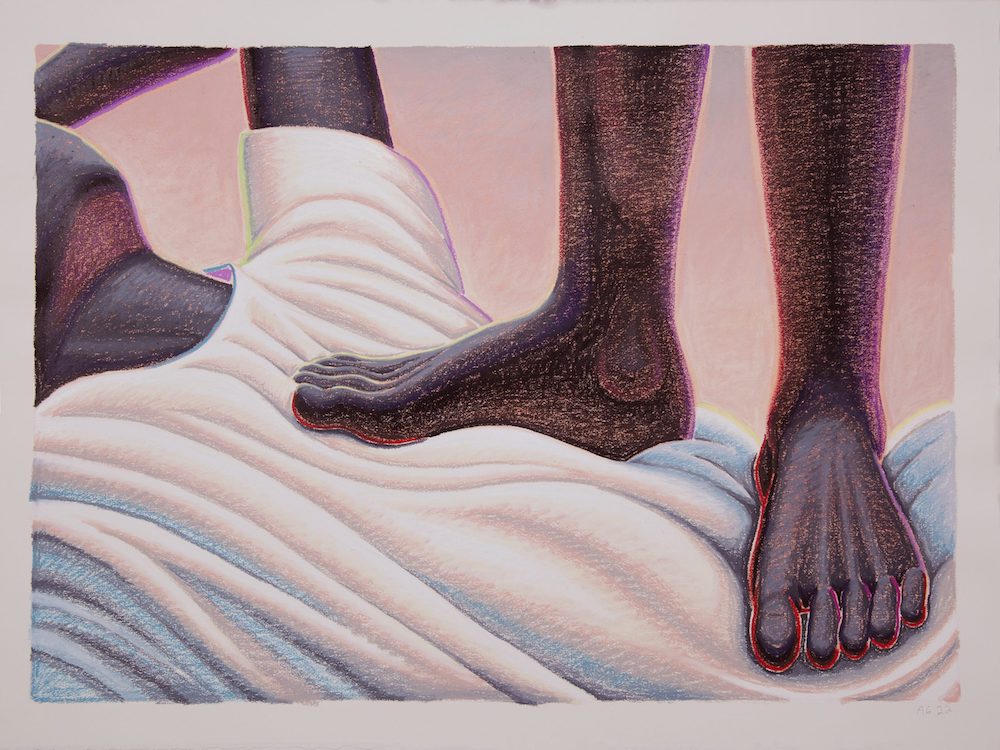 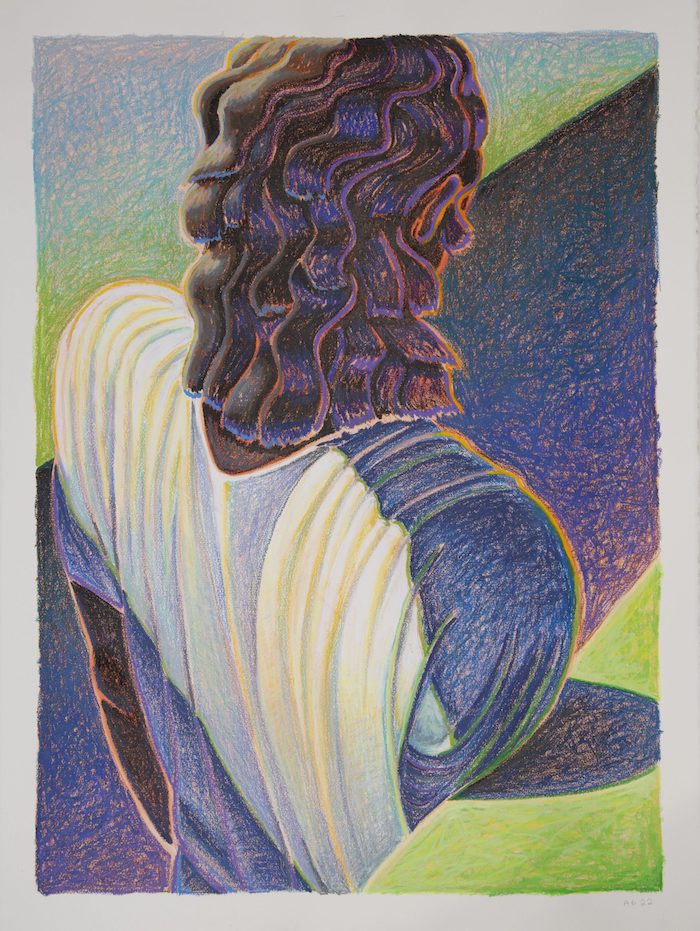 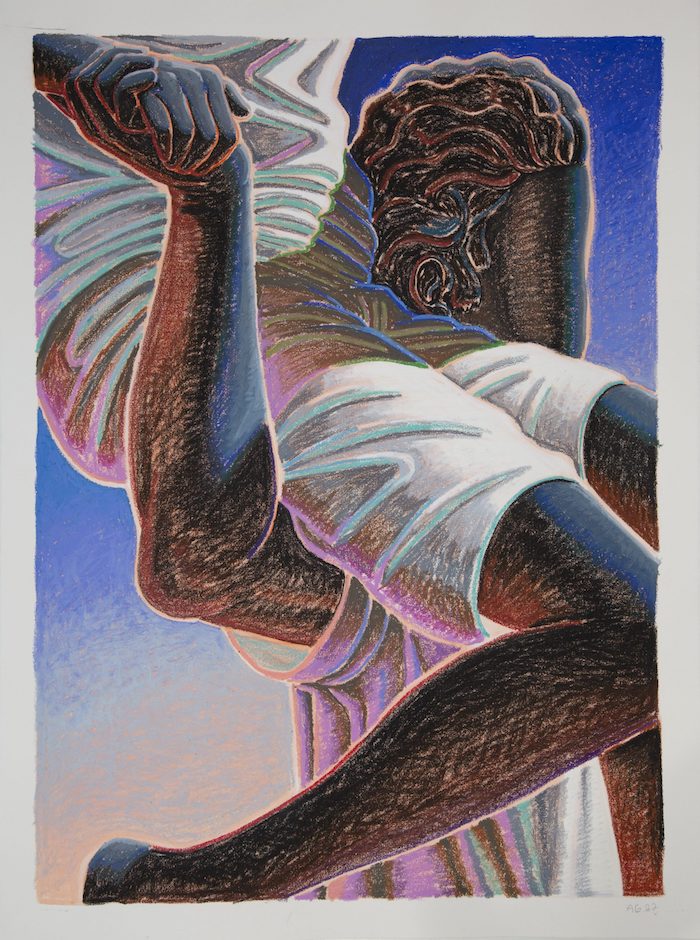 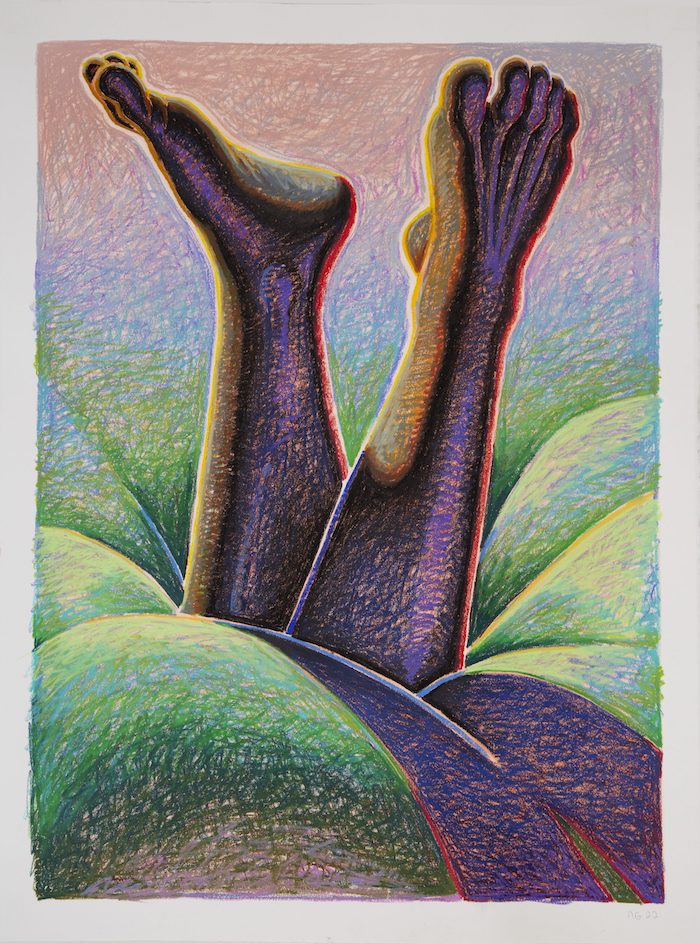 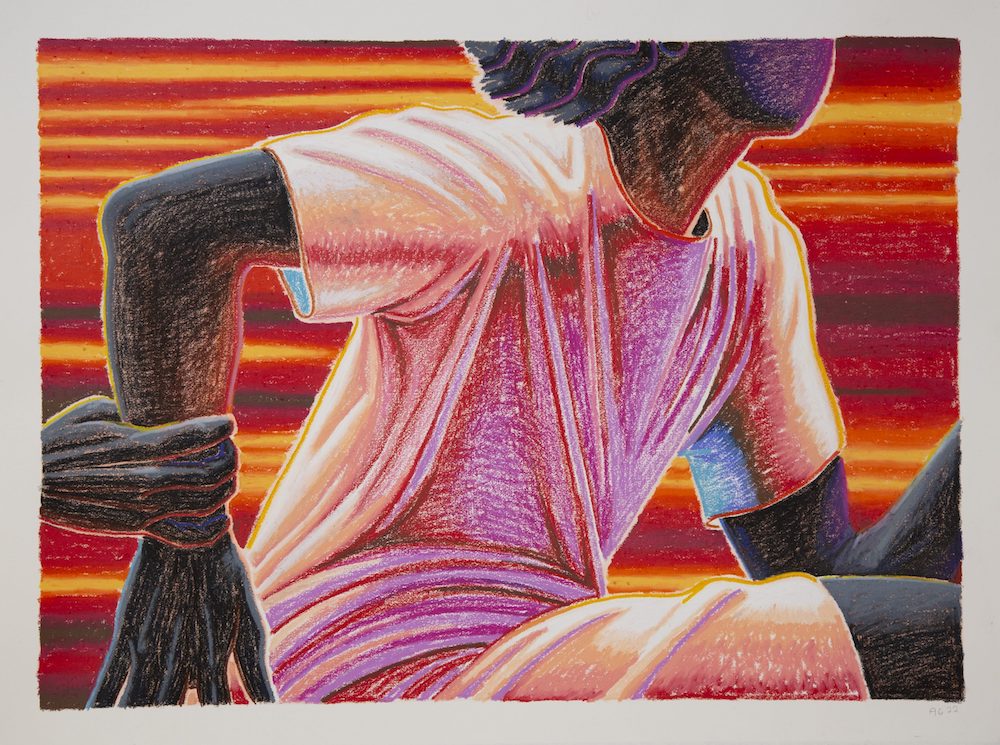 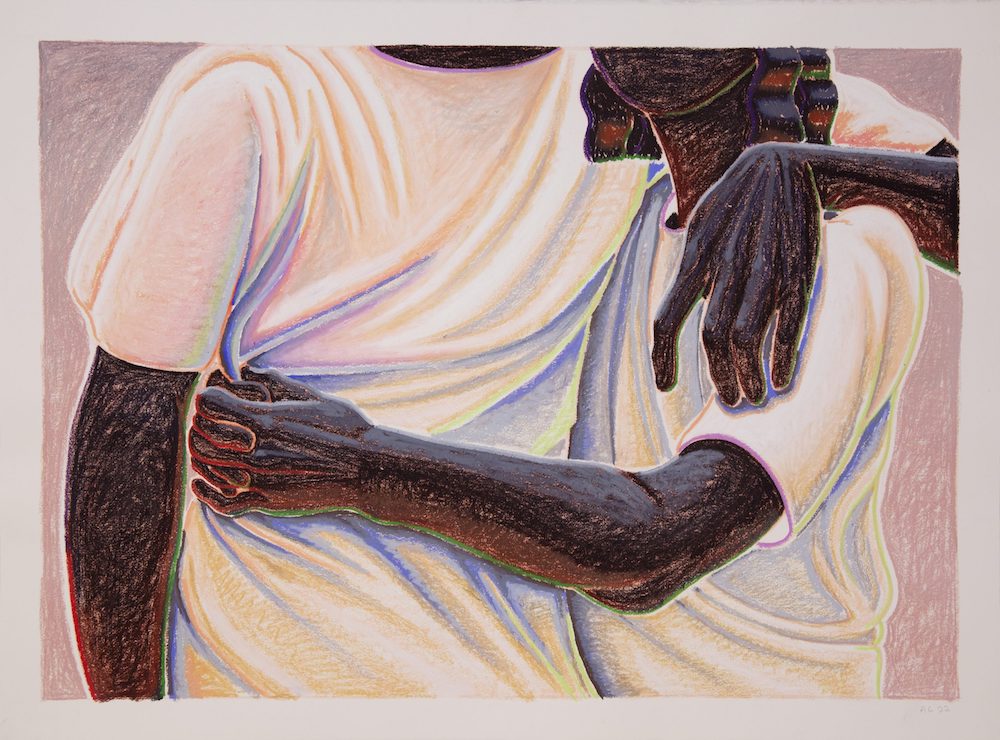 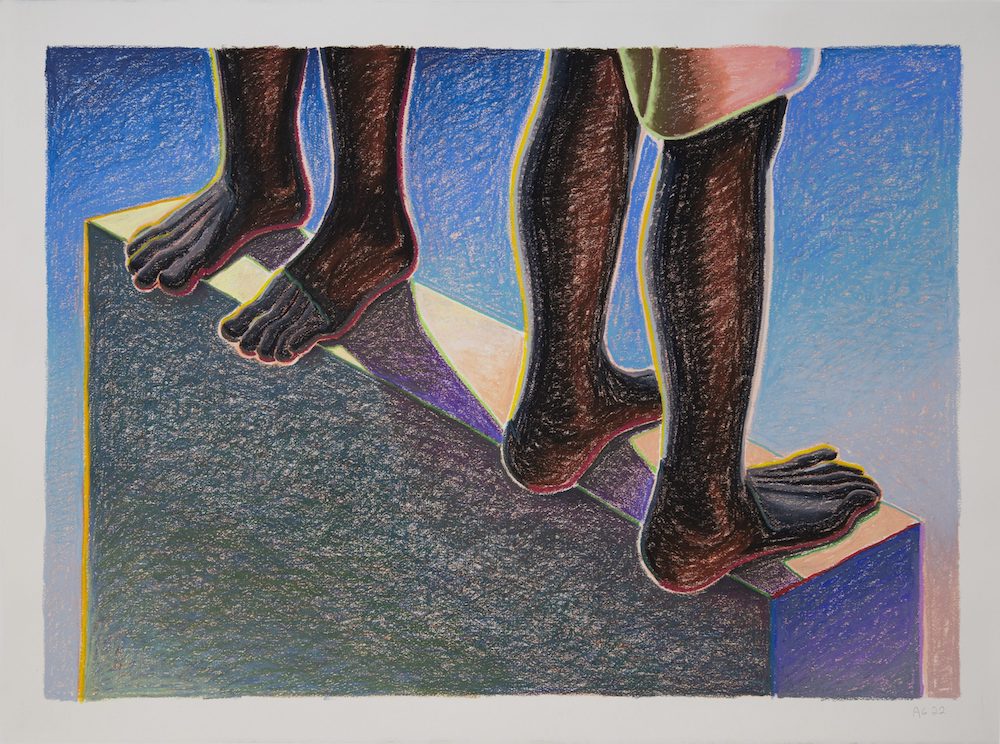 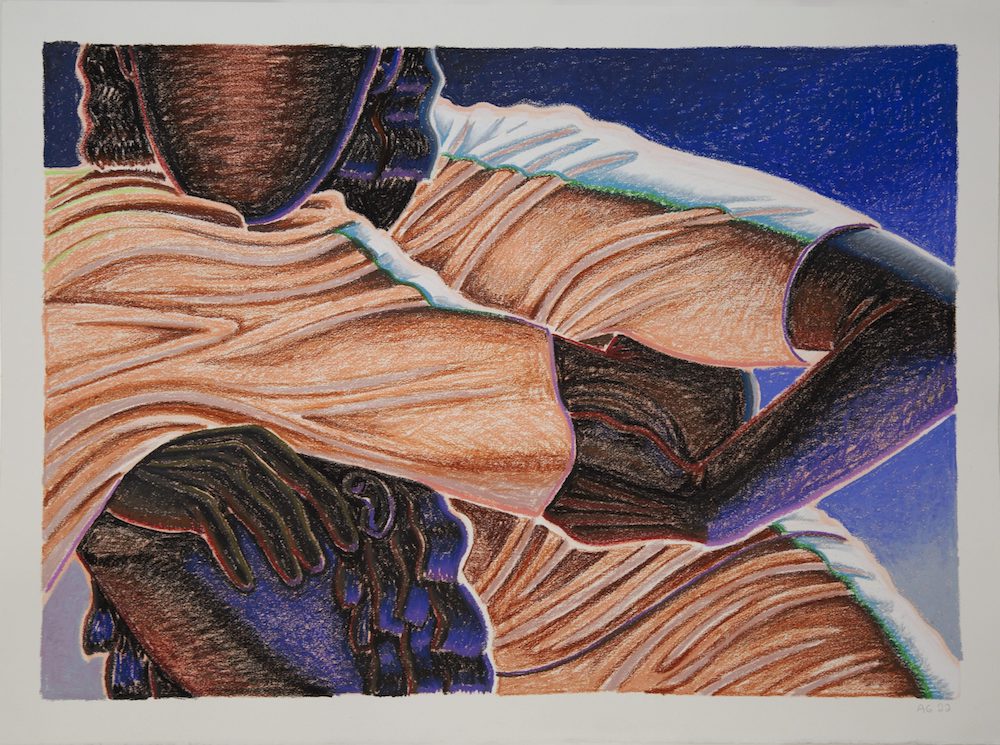 MINE PROJECT is pleased to present Drawing No Conclusions, the second solo exhibition by the American artist Alex Gardner in Hong Kong and with the gallery. Presenting the latest series of works on paper, this exhibition extends Gardner’s focus on the articulation of body language clues and talks about the universal questions about individuality or integrity.

At no point in his artistic journey did Alex Gardner (b. 1987, Los Angeles, CA) seek to face the spectator with a formed subject matter of self-explanatory scenes. Sprouting from simple, enigmatical, and somewhat caricature-like ink drawings, his paintings developed into candid scenes in which the presence of the viewer is acknowledged but not necessarily welcomed by the protagonists. This concept conditioned the unusual framing and unexpected compositional proposals, enabling the artist to focus on the articulation of fingers, wrists, feet, postures, and other body language clues. Working with layers of watered-down acrylics and oversaturating the canvas surface with the dramatic color contrasts, these almost cinematic snapshots allowed for the suggestive gestures or postures to outweigh the importance of realism or anatomical correctness. Mixed with exceptionally smoothened aesthetics, such a Mannerism-like glorification of elegance and aesthetics pushed the subjects a few steps closer to an avatar, bionic appearance. So while their hair curls and the drape-intense, white t-shirts evoke the class of ancient Greeks in togas, their existence within the pastel, stylized, and often abstracted environments pulled them back into the current moment of increasingly virtual existence. Along with a total absence of any cultural signifiers, such an unidentifiable time and space setup are the main qualities of Gardner’s universally relatable oeuvre. The faceless human figures reduced to sentient silhouettes became the common denominators through which the artist speaks of a complex and personally elusive concept of identity. From there, the conversation unravels towards relationships, communication, belonging, solitude, and general human experience, continuously resisting the gravity pull of the work revolving around racial identity.

Interested in speaking of these complex themes by giving the least possible amount of information, the atmosphere relies on tension and urgency in which the action can be seen either as safe or threatening, grasping or releasing, pulling or pushing, depending on the viewer’s context. And the way such almost clandestine scenes are laid out and rendered is something that Gardner seems to be especially interested in. Thematically extending on the paintings and existing in the same world, the nine works on paper comprising Drawing No Conclusions mark a fresh step on that journey by focusing on the immediacy of the process rather than making a significant contextual shift. With the removal of the brush as a mediator between the hand and the medium, the new soft pastel works on paper are revealing all the decisions that led to the final result through its grainy texture. Unable to rely on the gradients of diluted paint when shaping the volumes, or light and shadow effects, these defining elements are now delivered through the mix of heavily saturated colors. Still offsetting the potential darkness of suggested narratives with the carefully chosen hue and value range, a comfortable and suiting palette is built from the specks of pastel marks on the coarse surface of the paper. By doing so, the body shapes, the drapes, the contrasts, and the light setup get more intensified, earning an additional glow of contemporary artificiality. Due to the way these visuals are composed and rendered, the accent seems to be on the corporeality of human experience, but instead of talking about the evident race and/or gender issues, Gardner insists on universal questions about individuality or integrity. Besides that, the mixing of the vibrant pastel hues to render more intense surroundings suggests the interest in the way we’re interacting with the environment and affecting each other. This approach can extend to attributing the setting to character-like qualities through which it is directly interacting with the human protagonists (_foot image_, _narrow walls_, _feet on a wall_). Perhaps implying more exact subject matter through the titles of the work (Left Or Right It’s All The Same or Useless Nostalgia, both 2022), the ambivalence is now blazing through these romanticized portrayals of the universal human existence. Still not pinpointing any definite narratives or drawing conclusions, Gardner is drawing and introducing new forms of blank templates to which the observer can apply their own moods or experiences. —Saša Bogojev