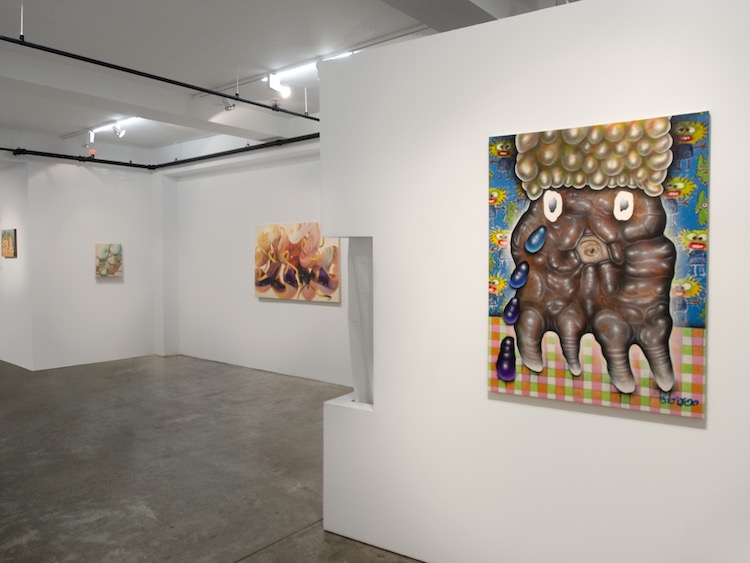 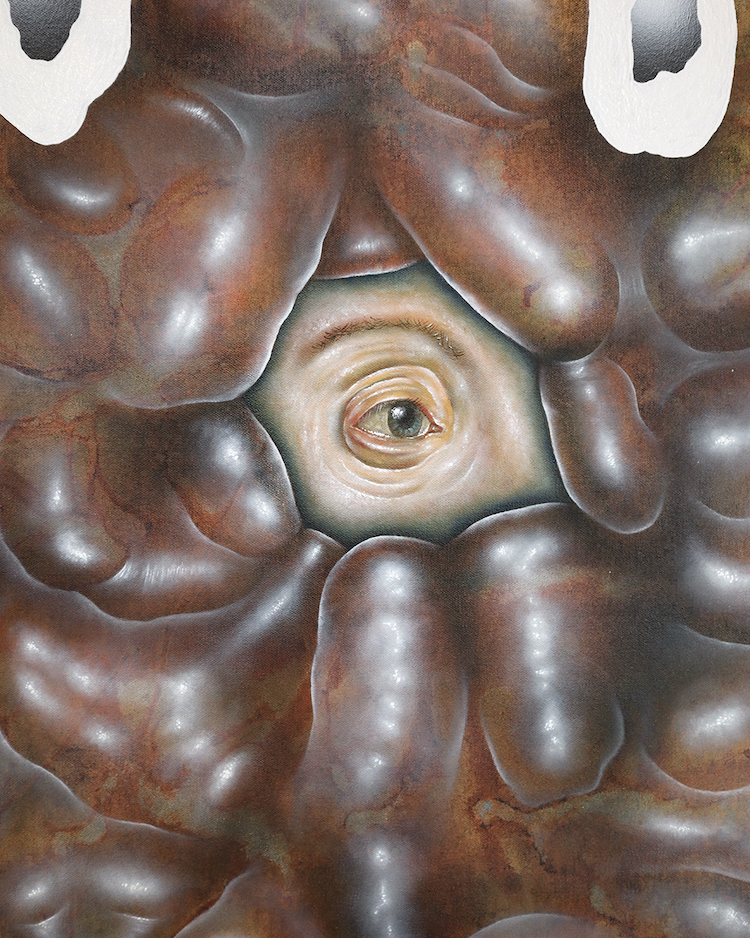 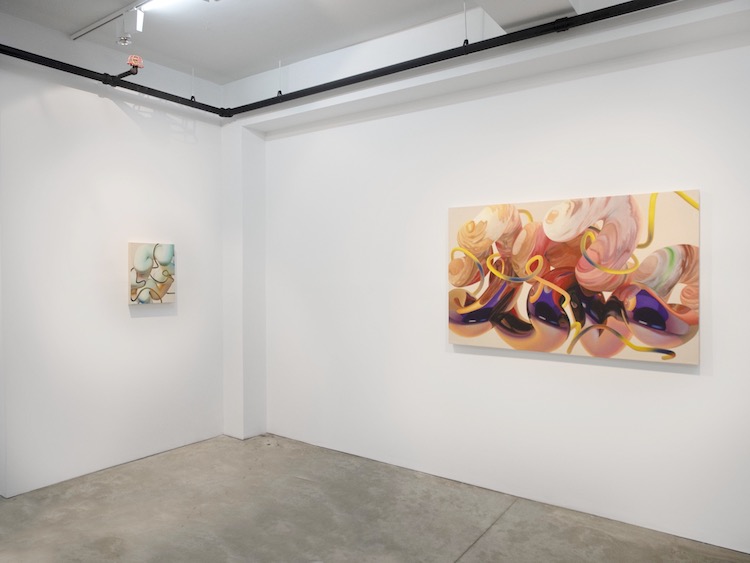 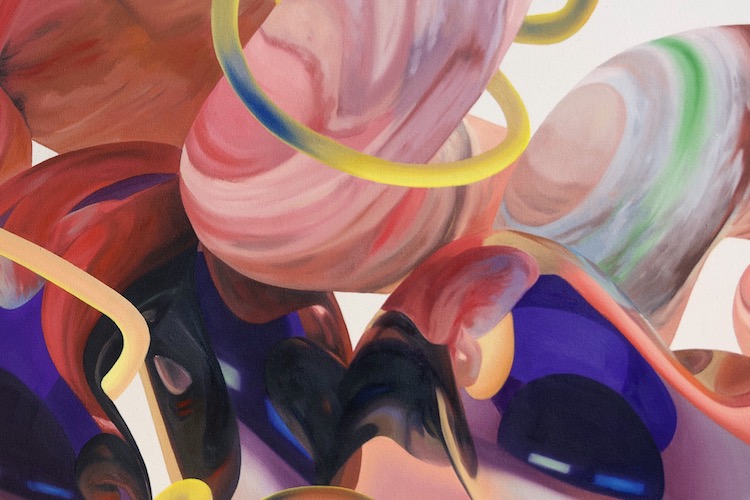 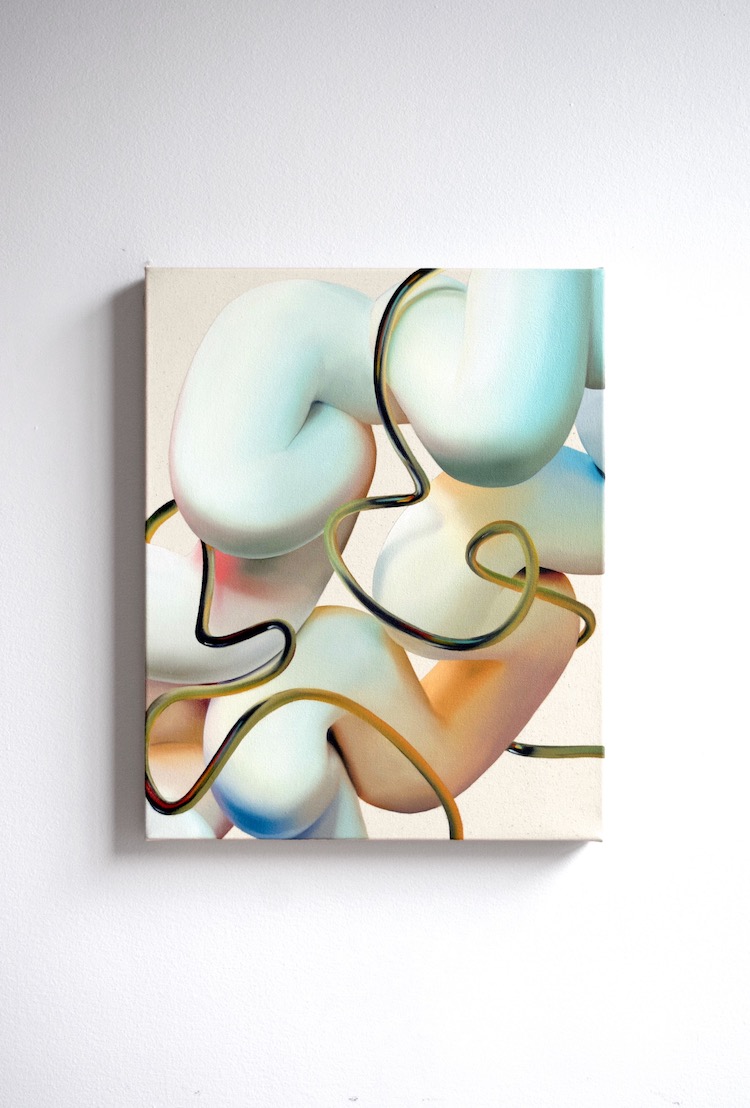 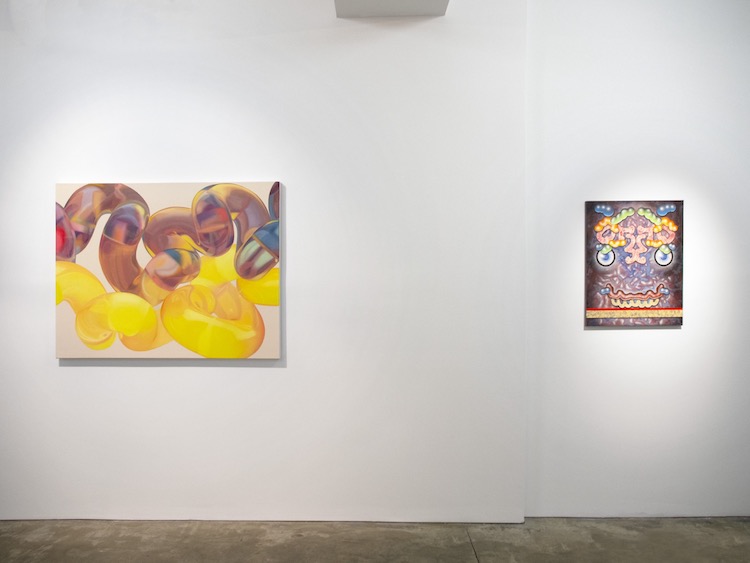 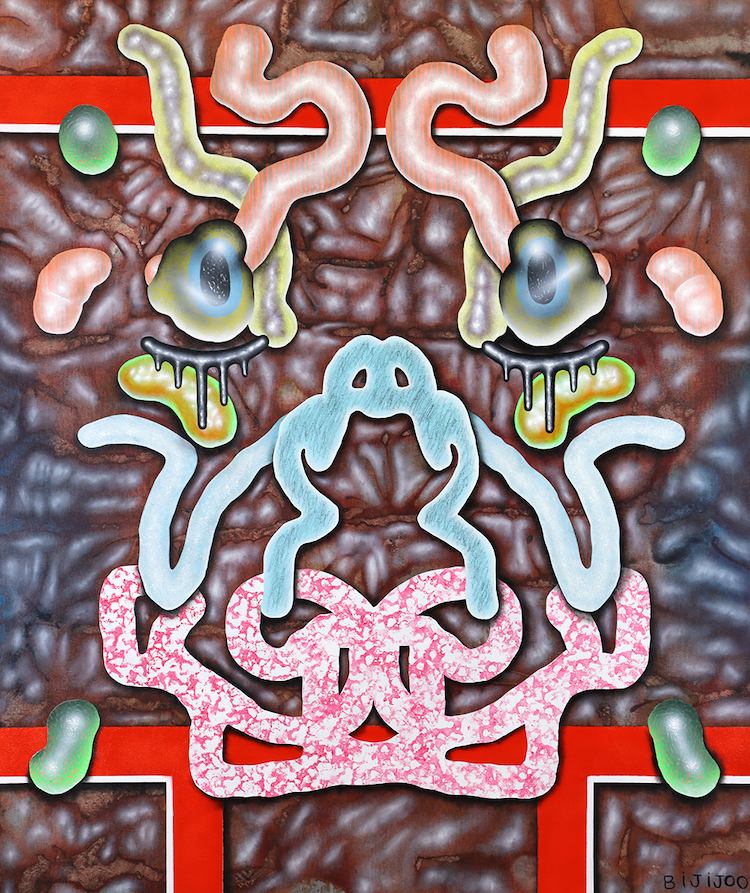 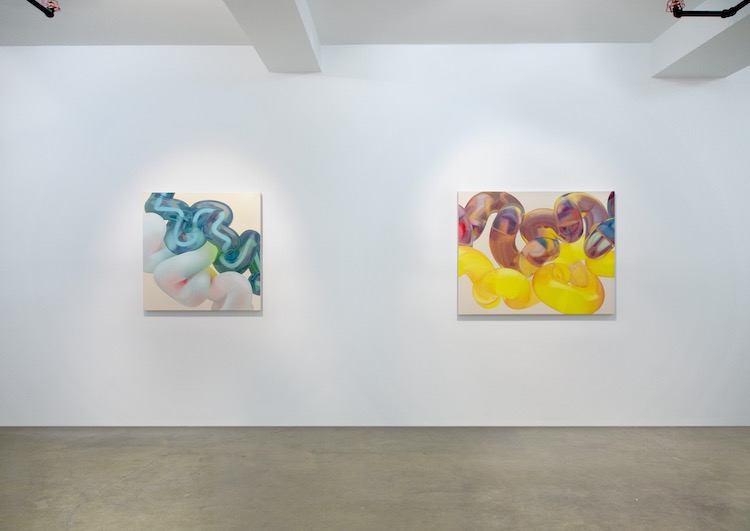 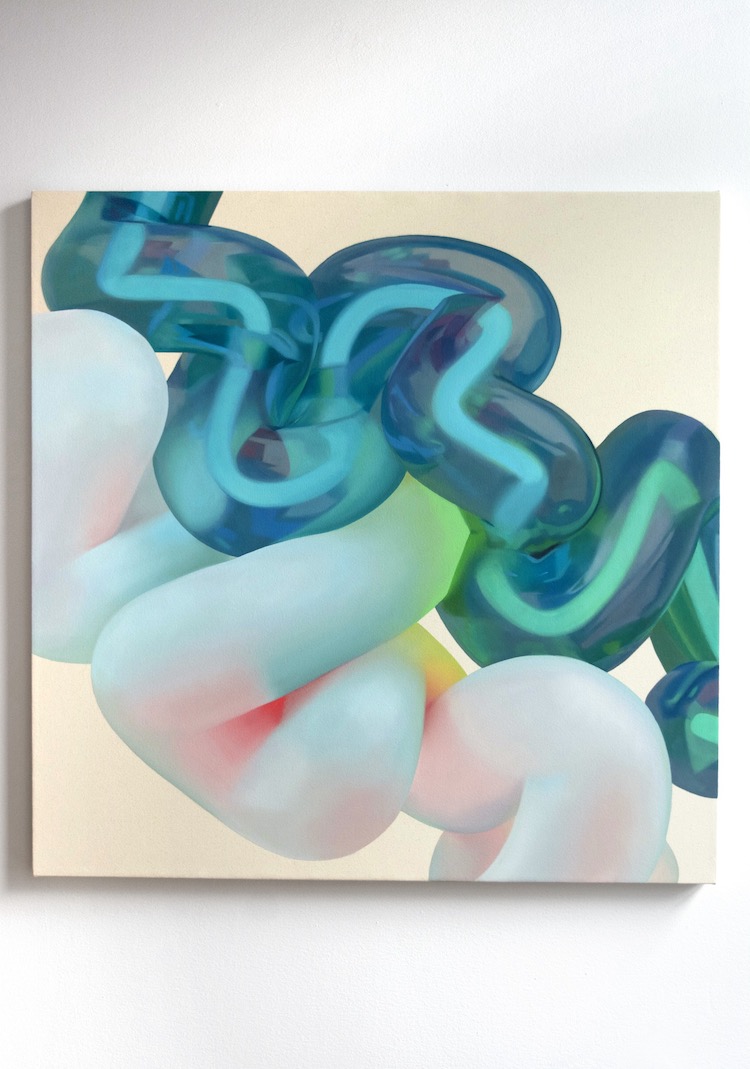 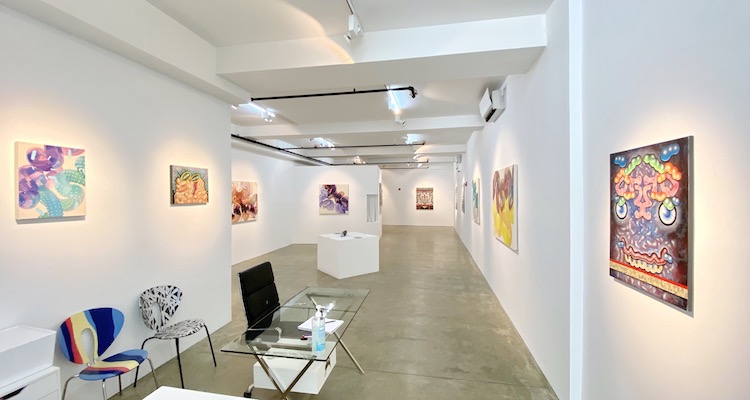 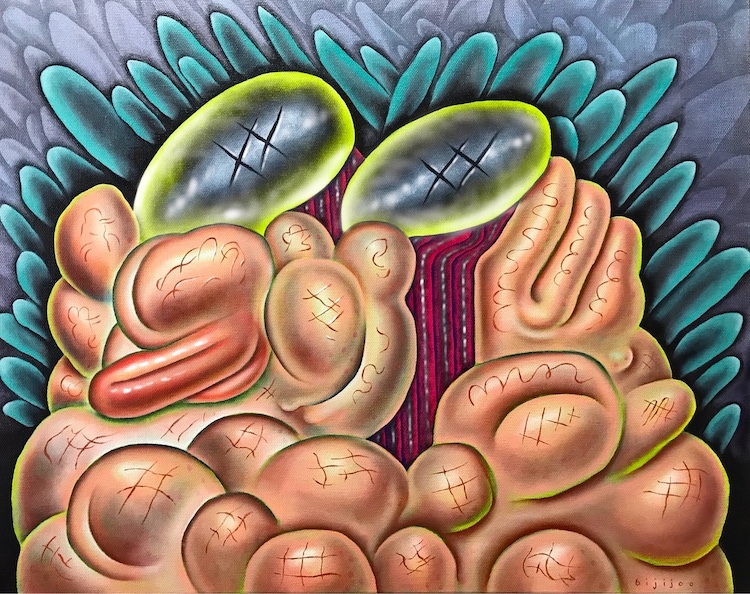 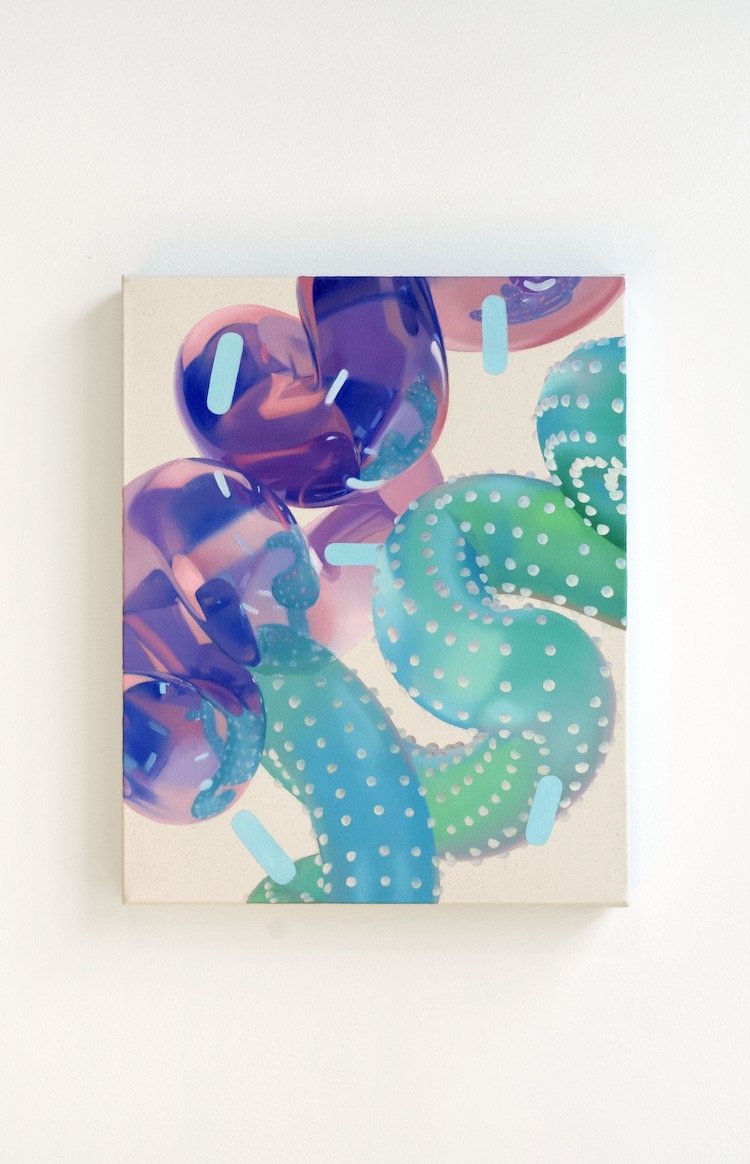 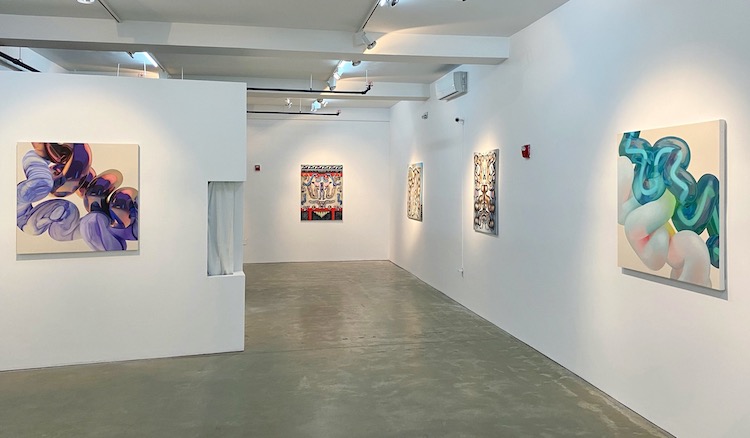 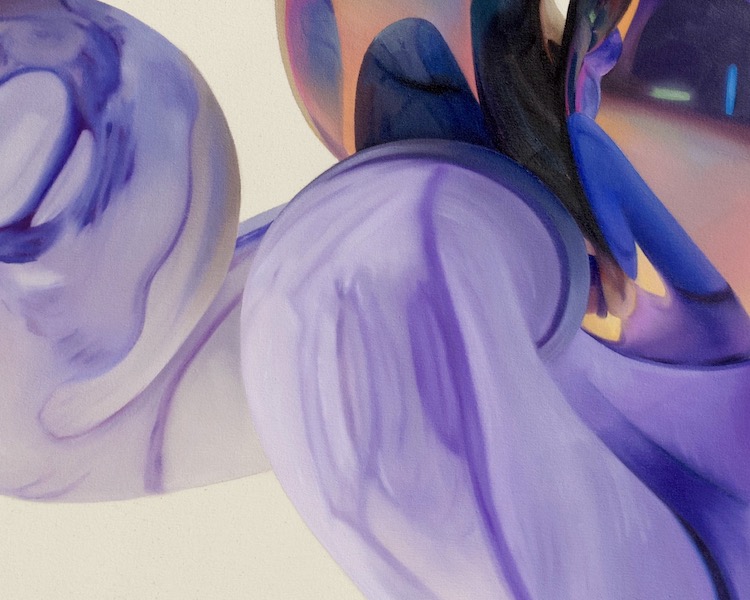 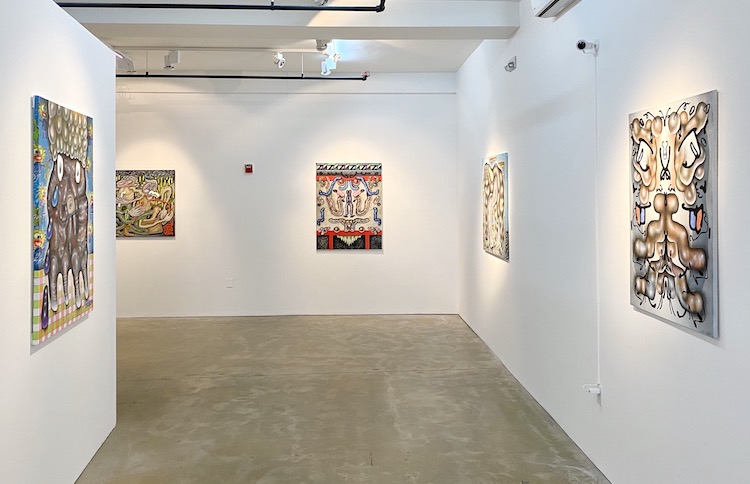 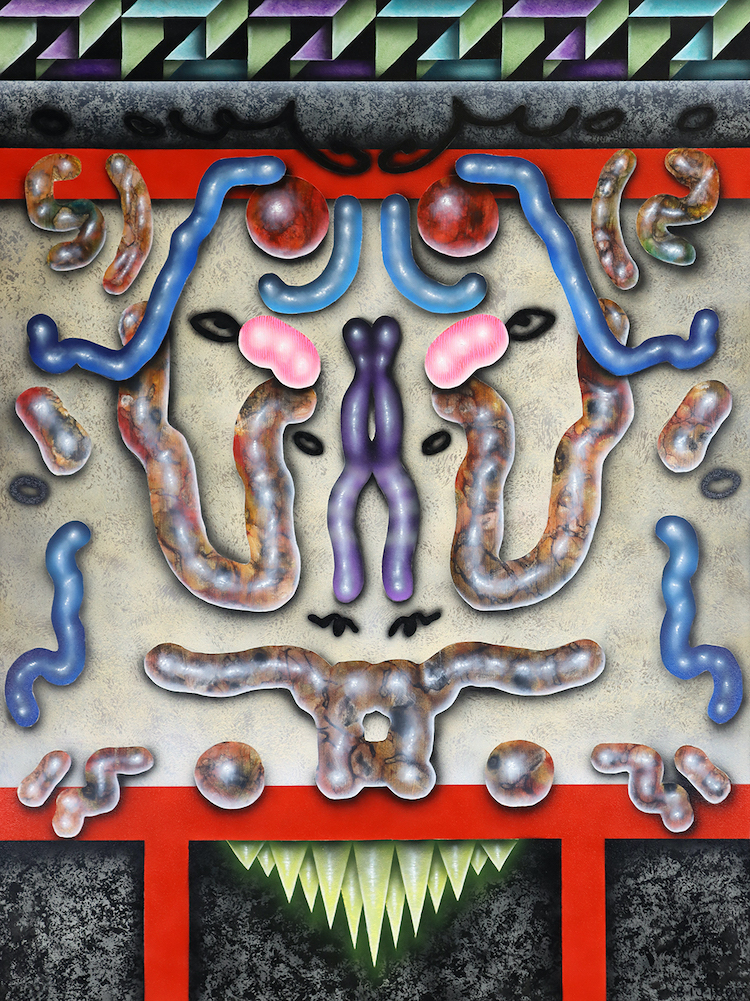 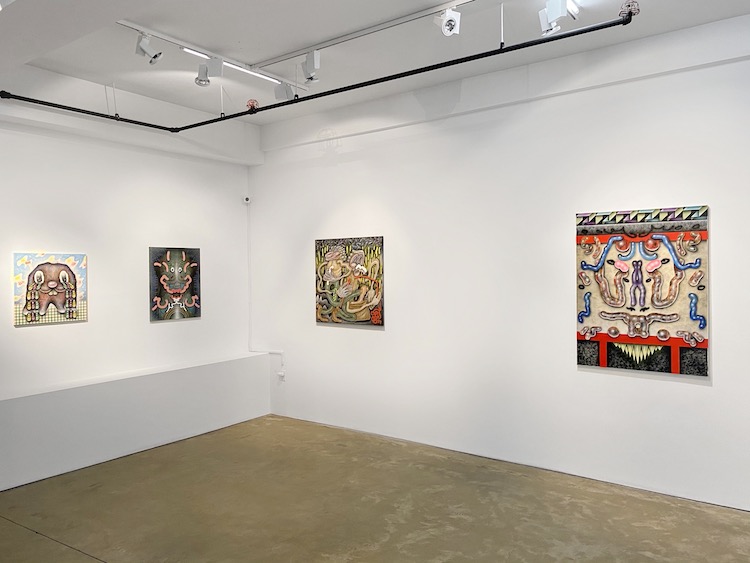 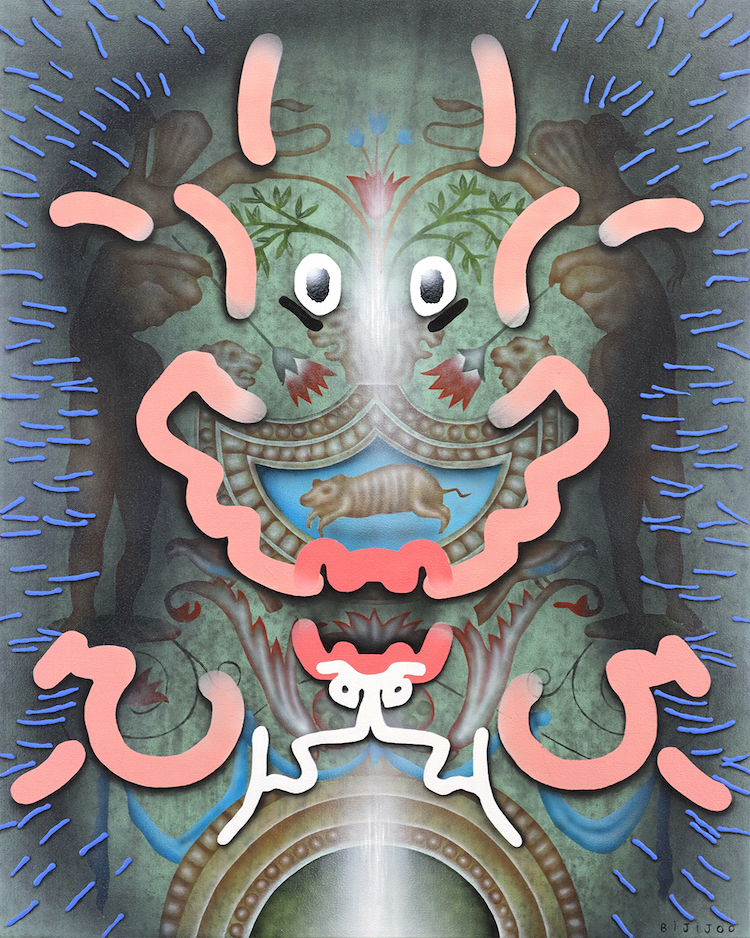 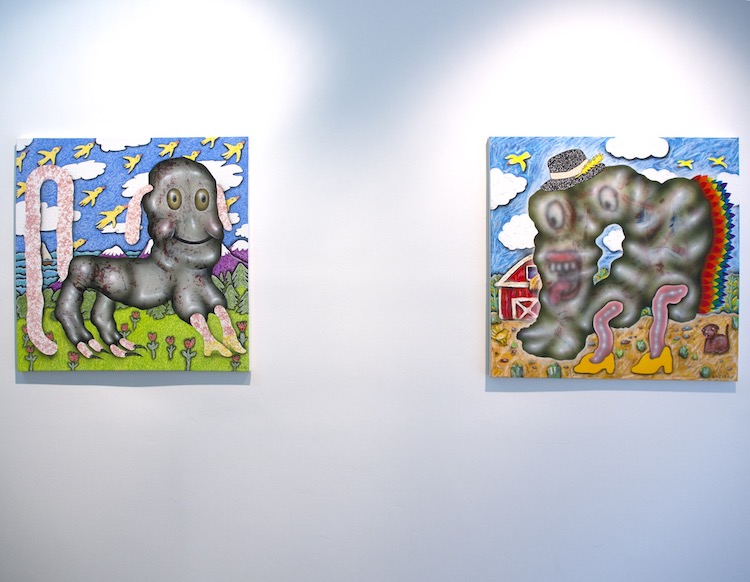 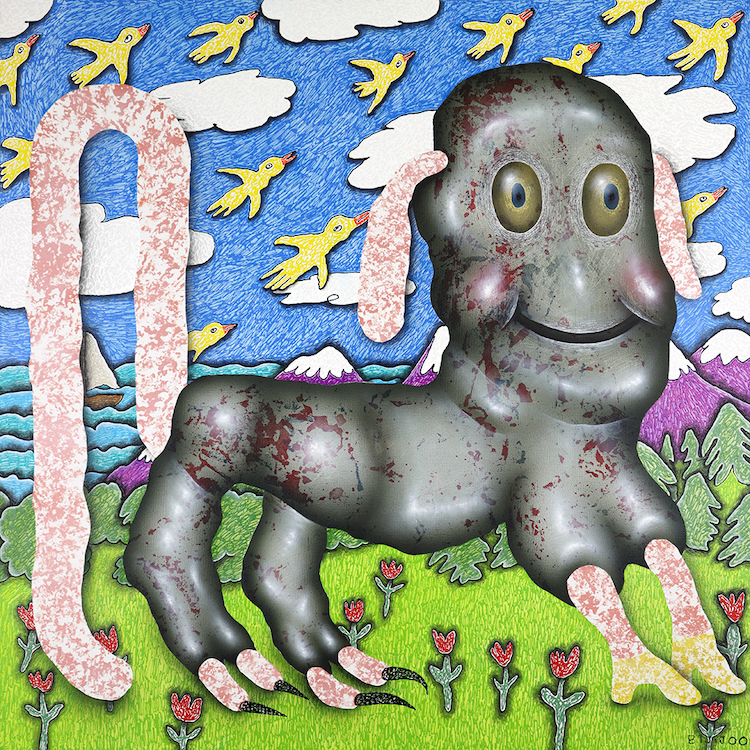 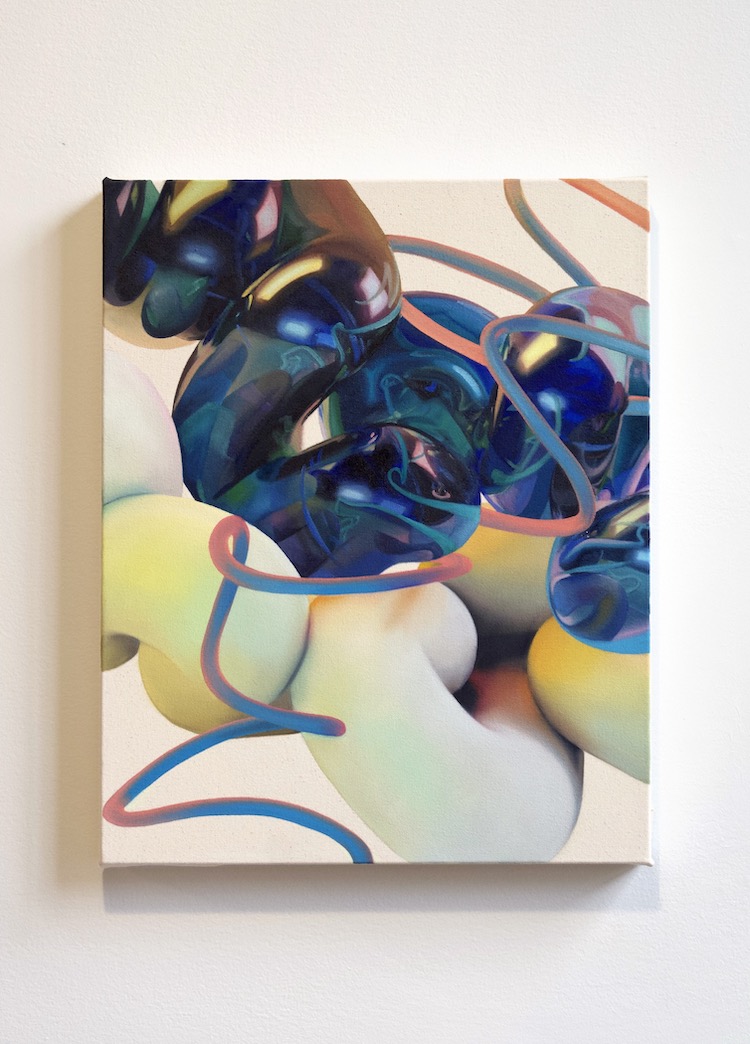 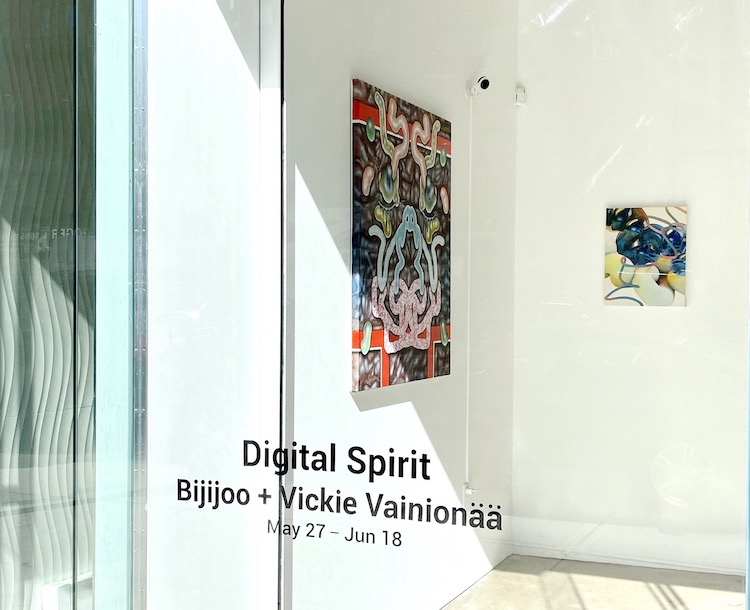 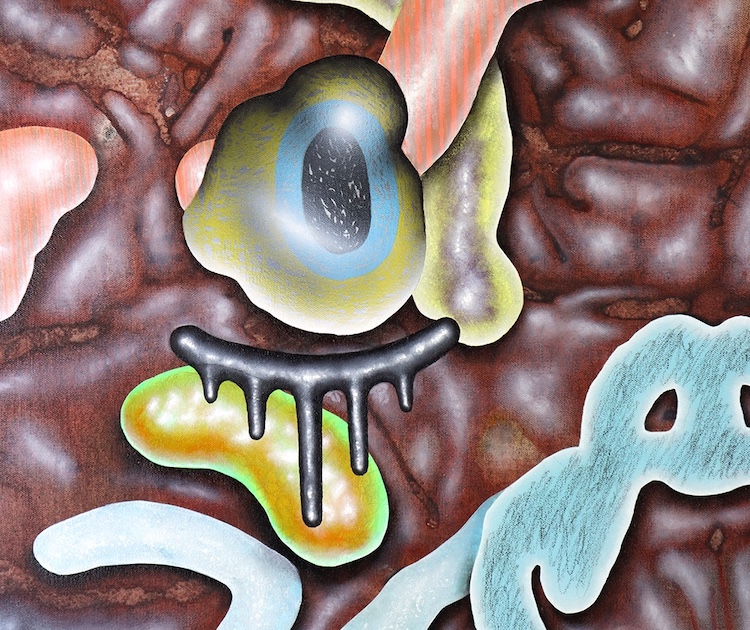 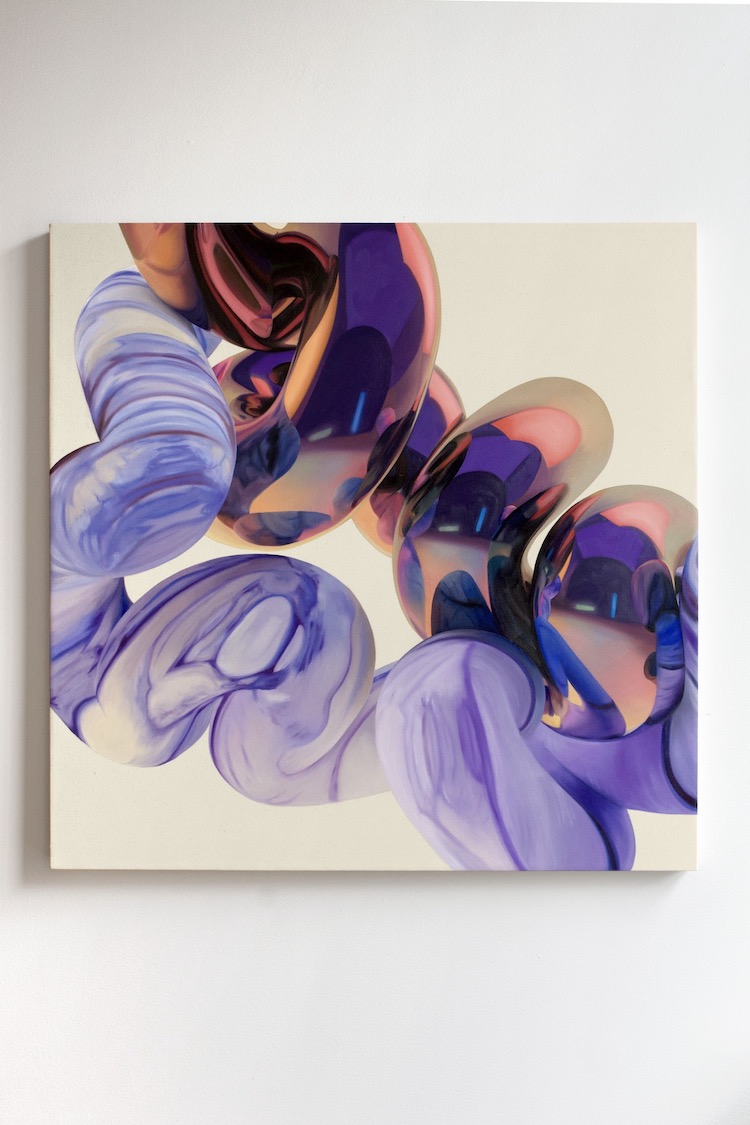 GR Gallery in NYC is currently presenting Digital Spirit, a duo show with Bijijoo and Vickie Vainionpää. Although working with unlike aesthetics, disparate technical approaches, and producing visuals that are seemingly unrelatable, there are conceptual similarities between the two artists that this exhibition is hoping to bring forward.

Vainionpää’s practice revolves around the impact of technology on the traditional painting process and the Montreal-based artist is employing that to research the relationships between natural, analog, and digital. Using the computer to randomly generate forms and their behavior in terms of perspective and light play, she then proceeds to render the chosen sections with a traditional oil painting technique. And speaking of researching, with a Ph.D. in biophysics, Michael Todd aka Bijijo, approaches his practice in an experimental manner, eagerly allowing the materials to lead his creative process. With a very brief compositional concept as a starting point, the Portland-based artist continuously explores the new territories he lands in, armed with confidence and curiosity of his scientific background. So, coming from a different starting point, both artists are utilizing the randomness which generates elements beyond their control, to get a core structure on which they build their more/less orderly figural visuals.

Yet, using the term "figuration" can be somewhat of a slippery slope in both cases. Where Bijijo often times bases his work on the depiction of imaginary characters, Vainionpää is strictly working within an abstract sphere. Through his experimental process, he is turning the self-evolved sections into random marks, glowing organic forms, familiar shapes, quirky character features, or mask-like compositions. Using a layering technique and mixing everything from airbrush, oil, oil stick, acrylics, and puffy paint, he is transforming these abstract shapes into voluminous structures, adding an effective light and shadow effect to their imaginary surface. Aware of the cognitive phenomenon through which most symmetrical compositions are recognized as faces, the recent pieces are basically using those to construct features of an elusive "mask"

Similar "objects" are the core of the Soft Body Dynamics series through which Vainionpää portrays the twisting, tubular forms which are systematically created using generative 3D modeling software. With the addition of also computer-generated color palette that references classical artworks, she is constructing an unusual conceptual bridge between tradition and modern technology, even AI. During this part of her process, she also used some of Bijijoo's paint pushing experiments to surface some of the forms seen in a couple of paintings included in the presentation, adding to the subdued coherency of the display. So, while working with clearly distinctive visuals, both artists are using their respectable artistic processes as innovation, creating their own metaphysical universes, strongly inspired by and relying on both digital and analog aspects of their practices. —Sasha Bogojev