Conscious Nostalgia: Daniel Benayun on Painting, 20th-Century Ephemera, and The Compulsion to Create 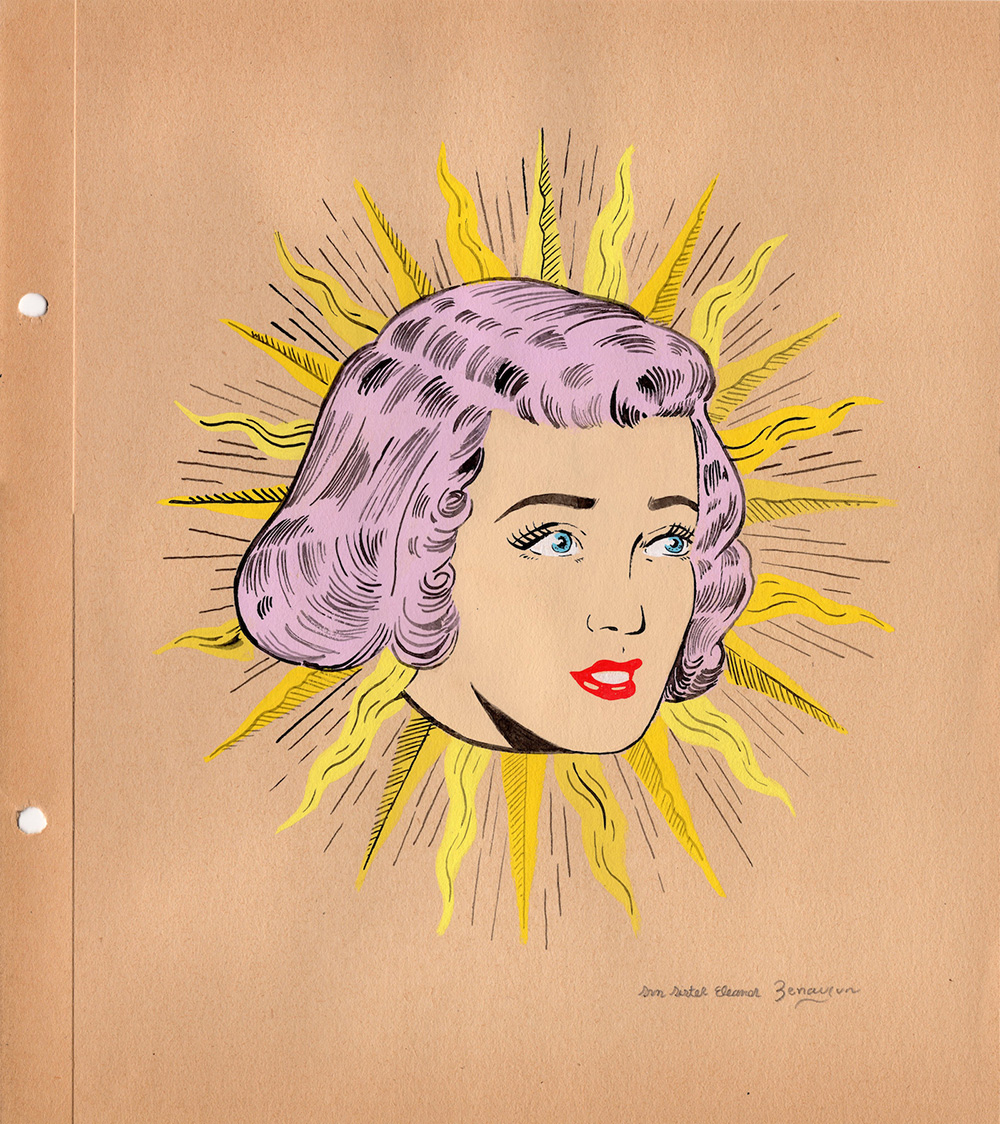 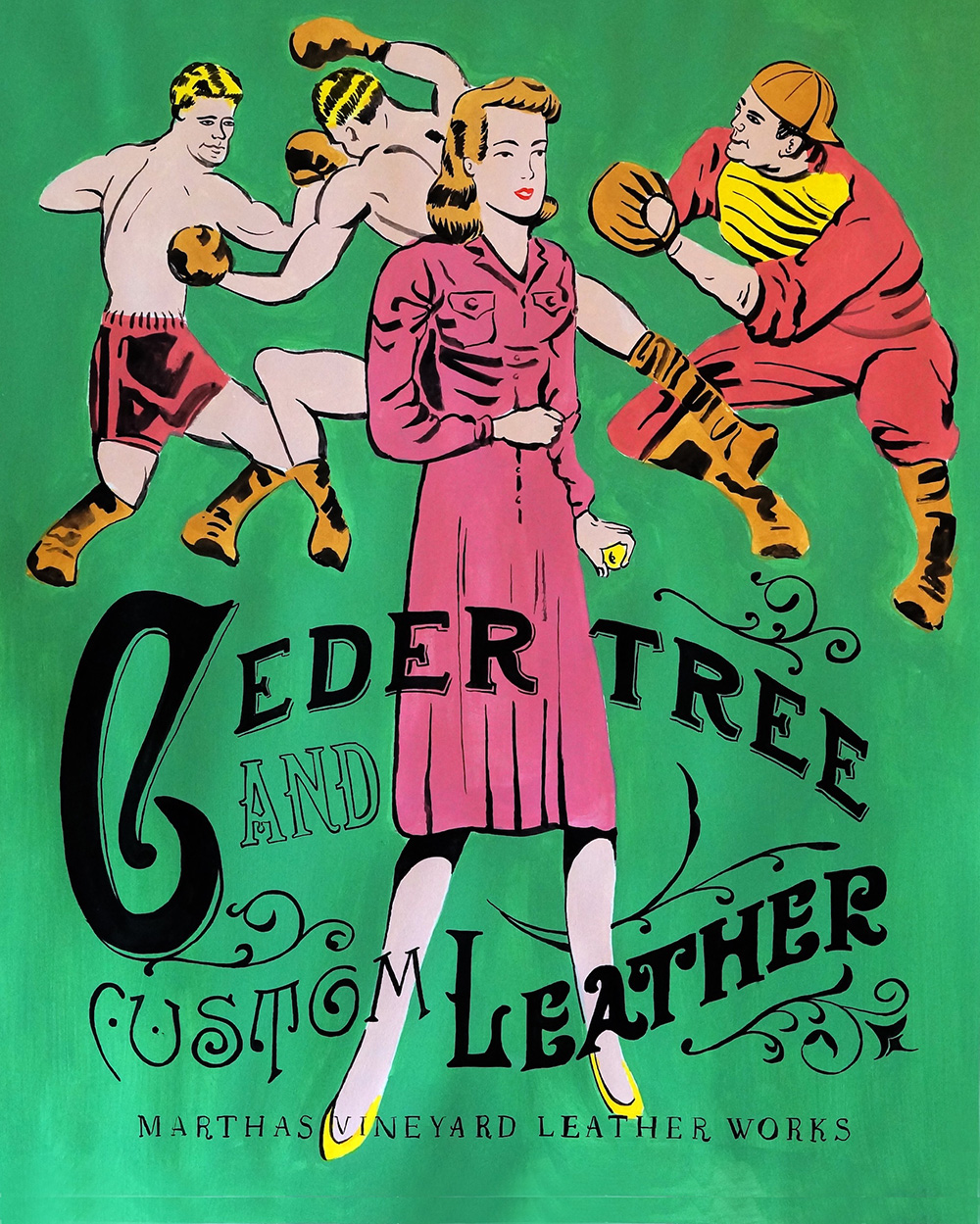 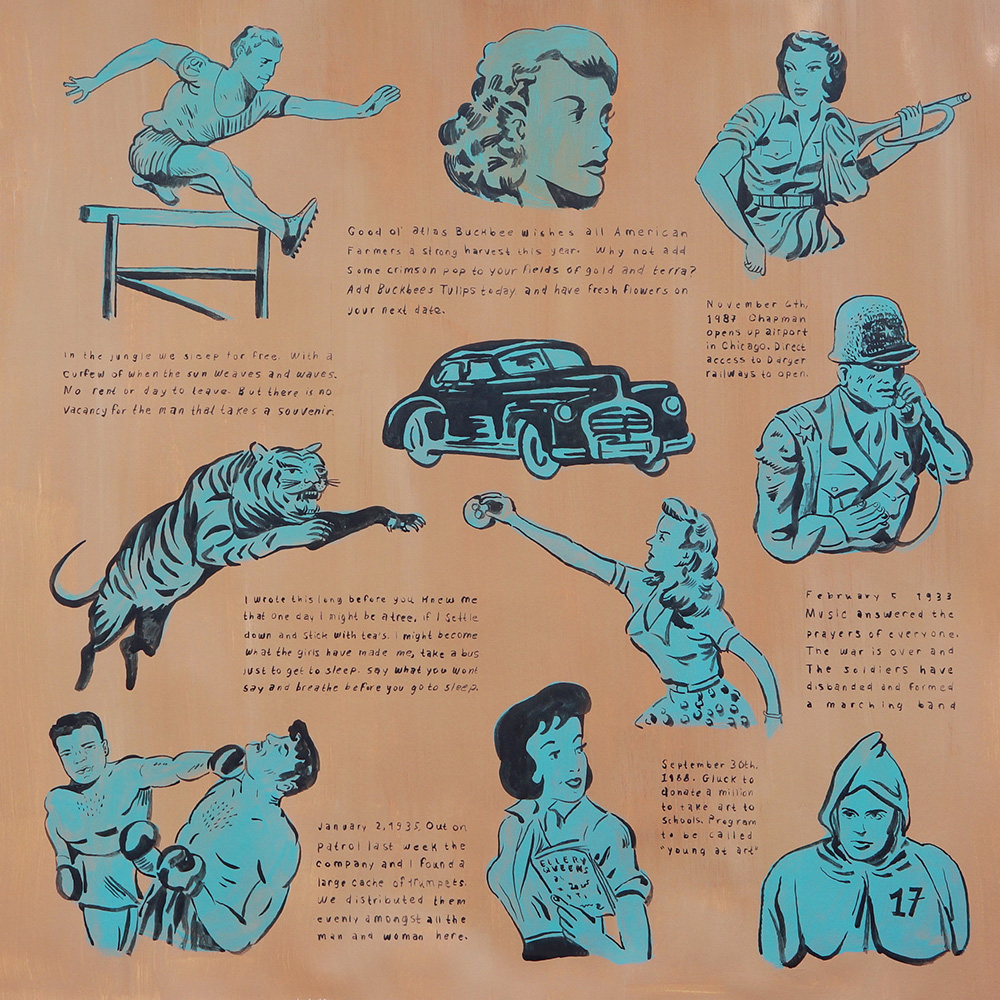 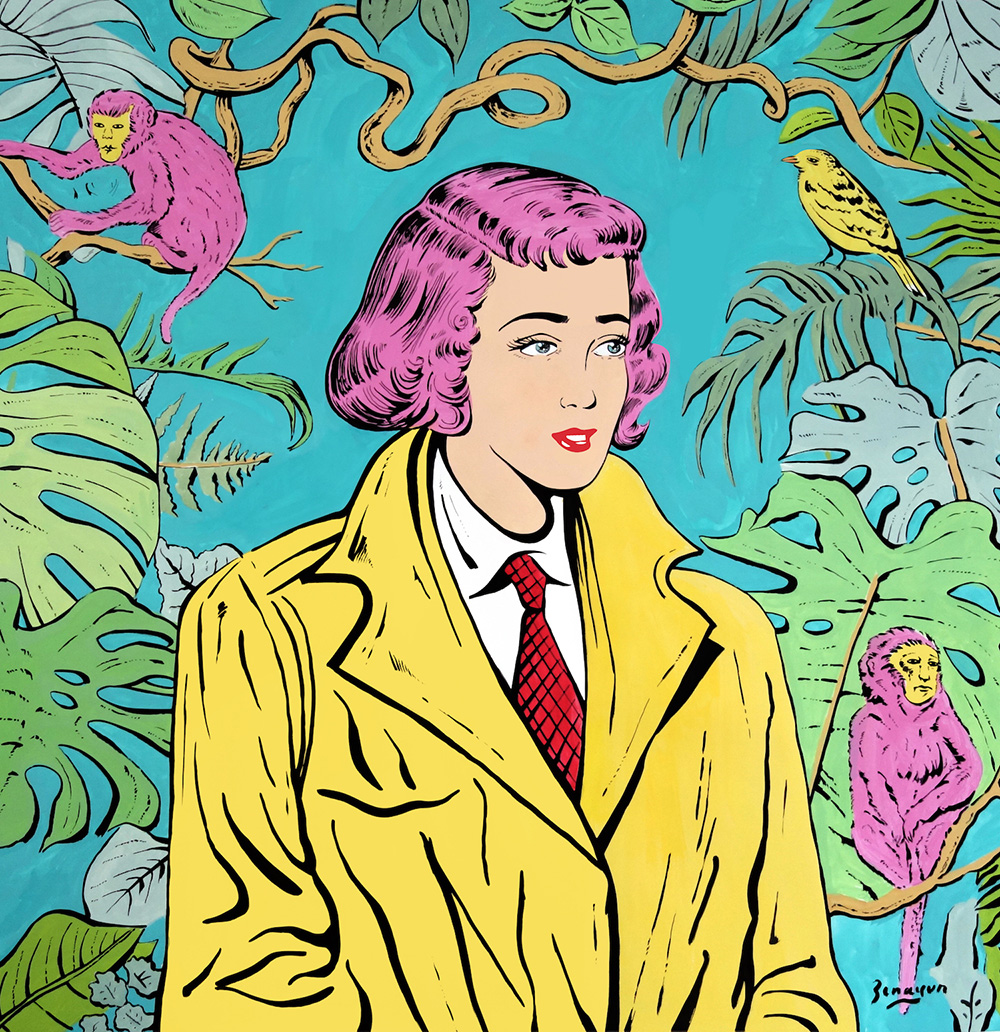 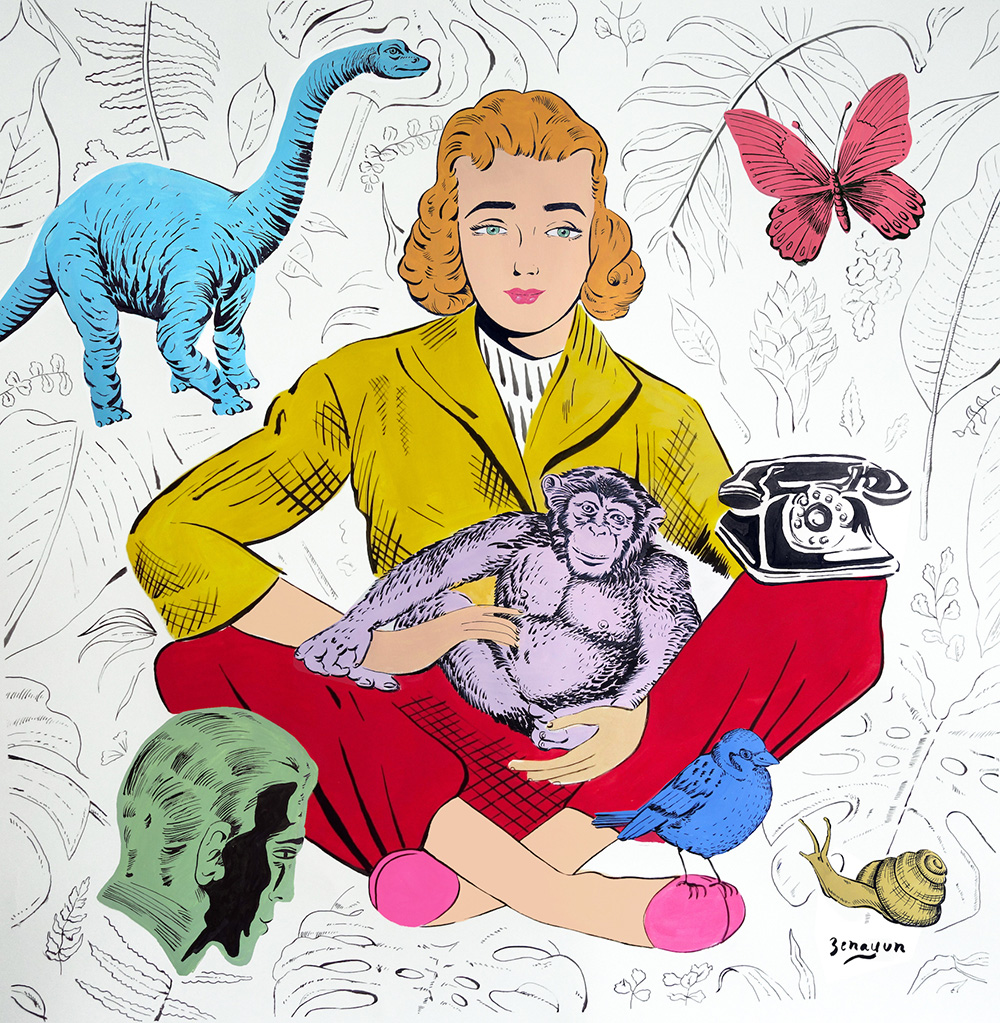 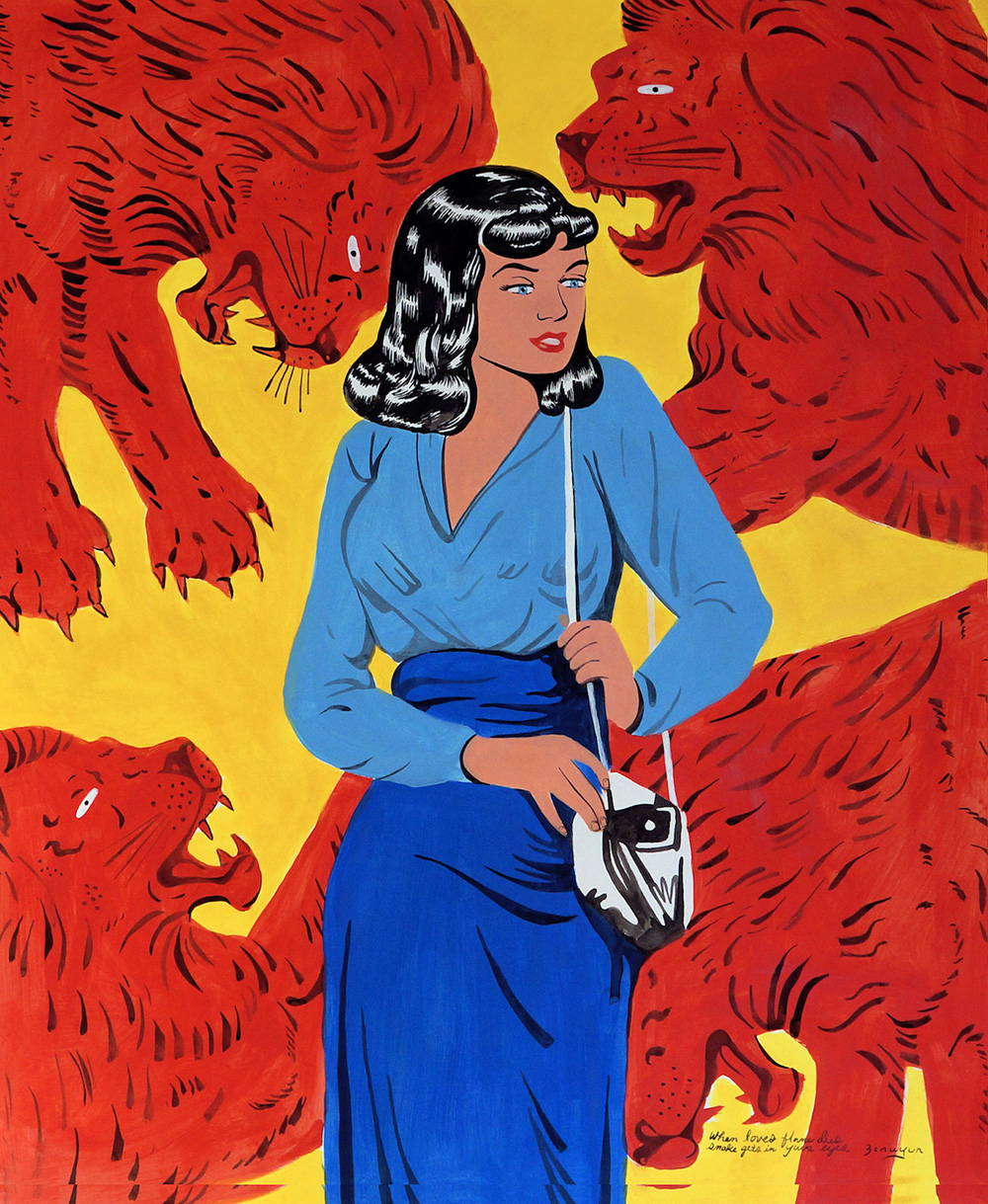 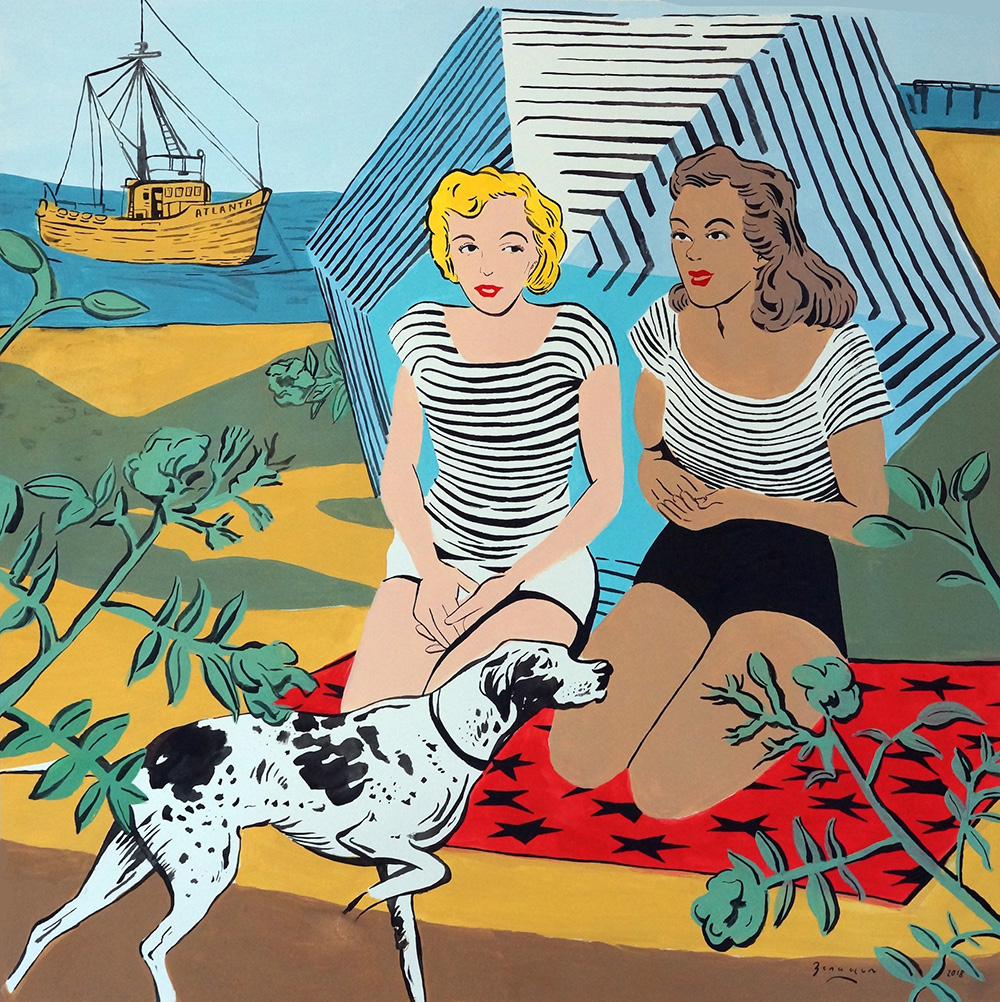 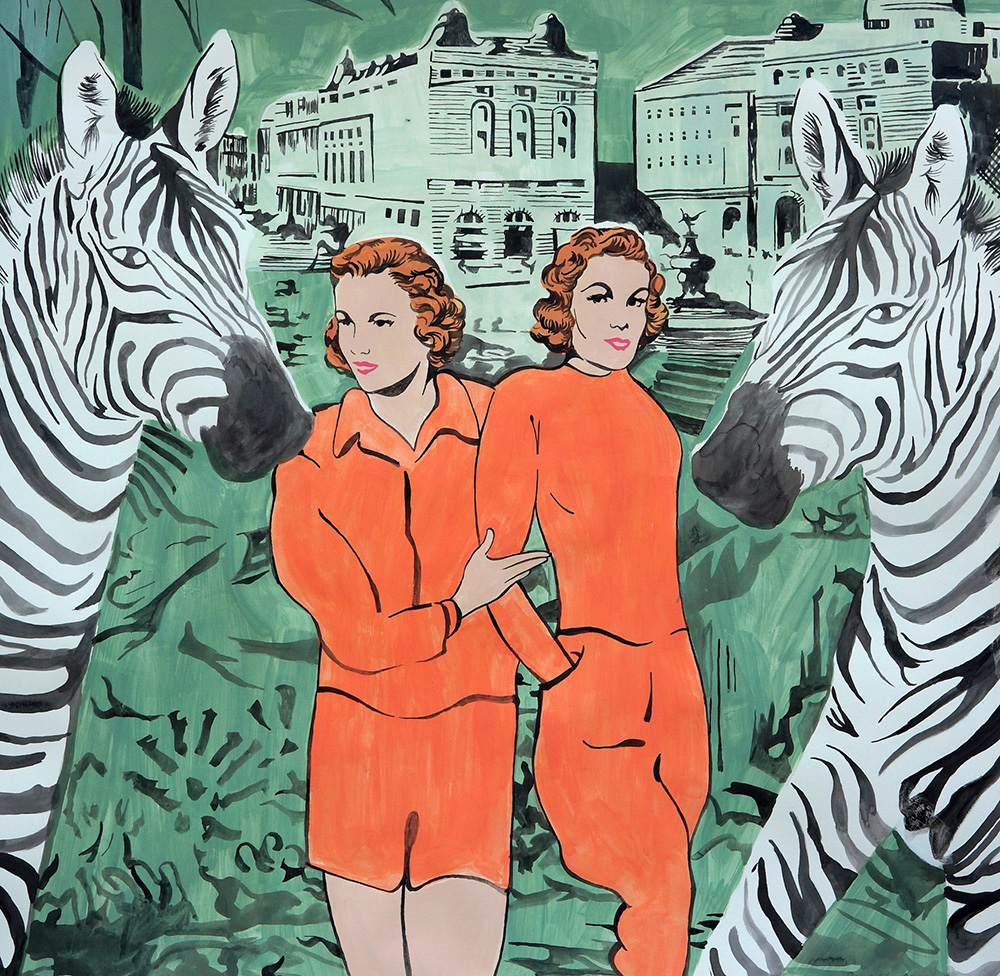 The foundations of Juxtapoz have always been in the place where illustration, nostalgia, and fine art meet. Our founder, Robert Williams, was a prolific comic illustrator, who believed that there was an unrecognized art movement surfacing from the American subcultural underground. His contemporaries like R. Crumb, Victor Moscoco, Craig Stecyk III, Spain Rodriguez, Todd Schorr, and many others, were making expressive art that came from a place of deep personal reflection and cultural resistance, yet the blue-chip gallery world was largely ignoring it. Since that time, Juxtapoz has championed the underground, which has become a much larger and diverse concept with the rise of street art, pop surrealism, and even Instagram.

All that leads me to Daniel Benayun, a young artist from Boston who makes illustrative paintings inspired by early 20th-century pop-ephemera. His paintings tap into an aesthetic that was developed for advertisement, but through his continuous study and work, he has found a place for himself in the continuous dialogue of painting. Read on below to hear about his myriad influences and how he's arrived where he is.

Eben Benson: What were your inspirations as a kid? Your work seems comic-inspired, but what else came into play?
Daniel Benayun: As a young boy I loved The Adventures of Tin-Tin, Charlie Brown and books by Jules Feiffer. During my childhood, I was pulled deeply into the world of animation through anime from Japan. Waking up at the crack of dawn with my brother Yona was synced with the Saturday anime line-up on the Sci-Fi channel in the 90s. Seeing movies like Castle of Cagliostro, Akira, and Robot Carnival felt like stepping into another universe and I couldn’t get enough of it.

Animation and comics have played a major role in my life. My introduction to art happened through comics. My third-grade teacher, Mark Canner, had lined the walls of his classroom with comic book strips. From the moment I entered that classroom for the first time all hope of me being a student of math or science was thrown out the window. Specific works in the room include some of what I mentioned above. It was during third grade that I began making comics of my own. Only a few months after being introduced to the medium, I had my comics published regularly in our school newspaper.

Aside from comic books, other inspirations of mine stem from a long history of going to yard and estate sales. I went to my first yard sale at age 14. The first item I remember buying was a tin storage box from the 50’s with a Wes Anderson-esque Park Ranger on a horse. This event planted a seed in my head that ultimately blossomed into the admiration I have for vintage design, typography and other facets of this era. In the past few years this hobby for antiquing turned into a side hustle. I have hosted many estate sales for homeowners in Boston, so I am frequently surrounded by antiques.

When did you start painting more seriously?
I have been painting my whole life. I have noticed that every few years I enter a particular mode of creativity that almost feels manic in the sense that I seem to do nothing else but paint and eat.

Last year for example I painted around 100 paintings. One of my favorite photographs of myself is this photo my sister Tamar took when I was a junior in high school. I am surrounded in my art studio (thank you Mom!) with literally hundreds of paintings I made. I skipped 150 days of school between my junior and senior years of high school so I could just be in my studio to paint. I made a lot of people angry doing that, but I wanted to make art as a career. 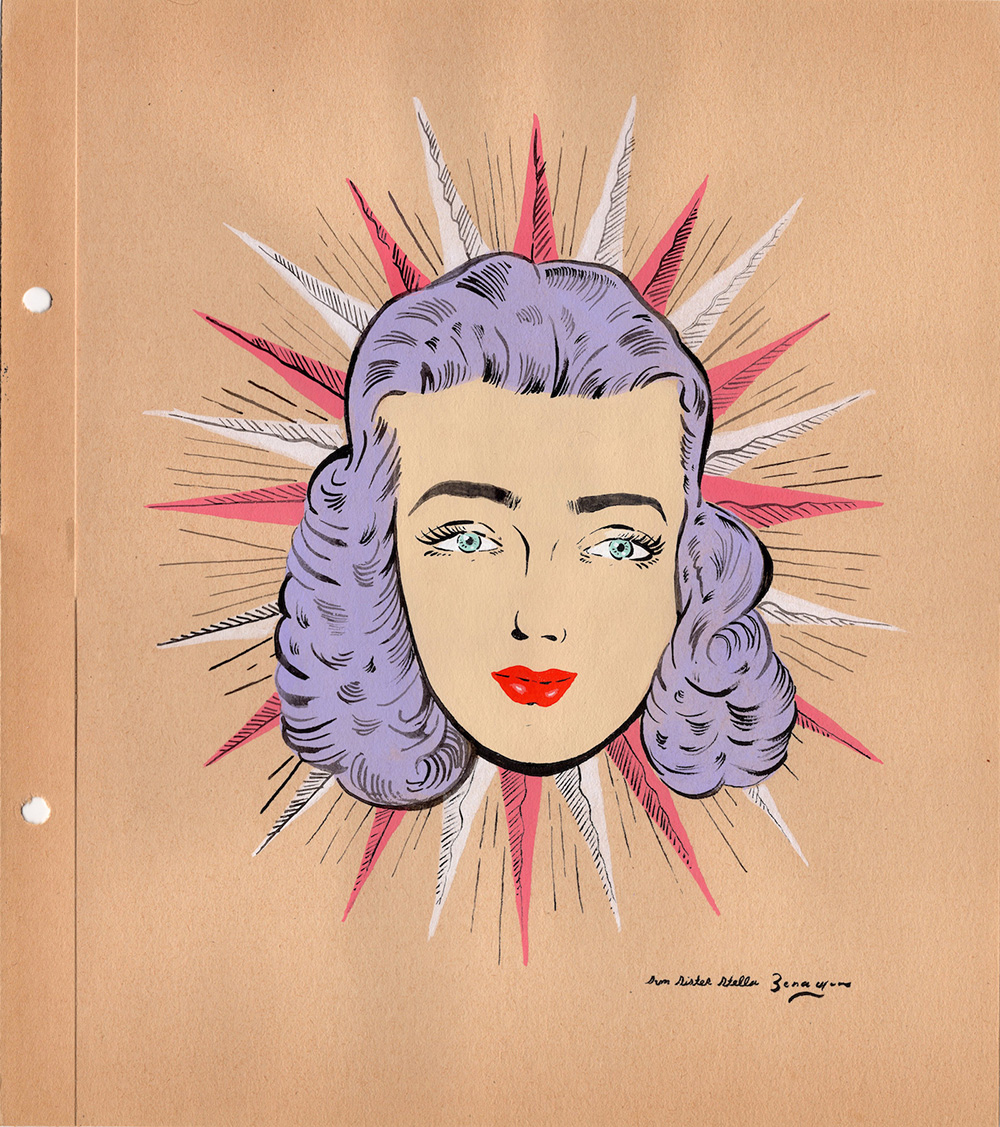 What do you do outside of painting these days?
Outside of painting I teach private art lessons in Boston. I also enjoy playing guitar and reading books. I read about 150 graphic novels last year. My favorite authors are Daniel Clowes and Osamu Tezuka. I also record short comedy videos that I upload to my Instagram on occasion. I have a mini-series called “The Benayun Book Society”. The Book Society videos are kind of like “Log lady (Twin Peaks) meets Tim and Eric,” except my rendition is infinitely worse! Making videos for Instagram is a gratifying experience. I break down the wall between the viewer and myself. I feel that it’s important for gallery visitors (digital or real) to meet artists and have conversations, make connections, and discover an artist’s intended purpose. During my free time, when I am not painting, art still manages to permeate the other facets of my life. I like to think about that question of purpose. What does it mean for me to be a painter? This question led me to teach art lessons on occasion. Art has had such a beautiful impact on my life, hence my desire to evangelize whomever I can! It was an inevitability. 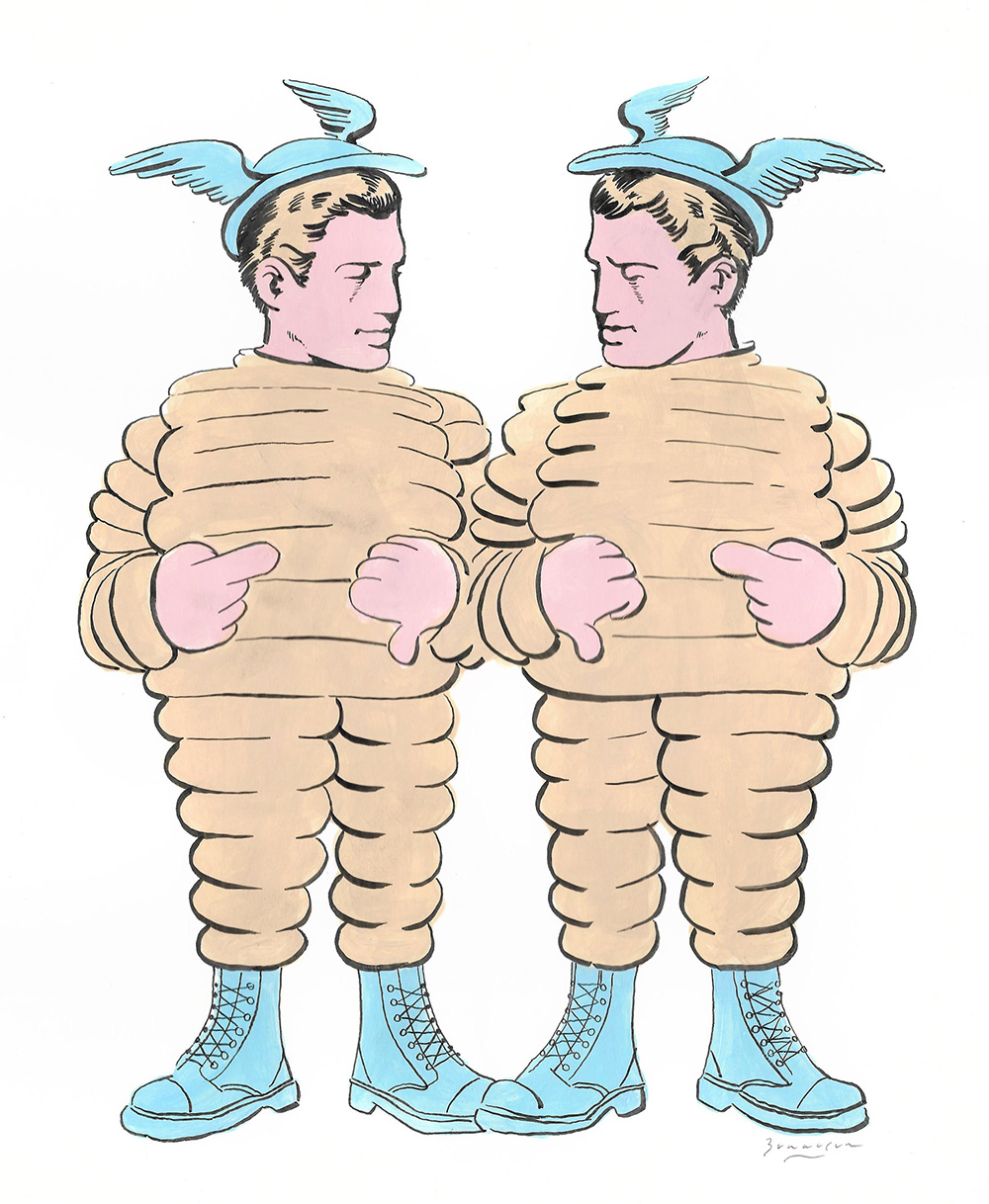 Do you go to museums much? Or follow the art world? What was the last show you saw that really affected you?
I go to museums fairly often. I have a membership to the Museum of Fine Arts in Boston. The museum is a ten-minute drive from my home, making it easy. They renovated the museum a few years ago and it is a real beauty. Although this has its downsides, much of my consumption of art the past few years comes from Instagram. It has been amazing to connect with numerous different artists from all around the world. Artists whose work I surely would not have found without Instagram. I have always been a huge fan of the work of Mab Graves, who randomly started following my Instagram. This amazes me and acts as another one of those motivators that inspires me to play with this sensational social media tool.

The last show I saw that affected me was in New York several years ago at The American Folk Art Museum. The exhibit was the permanent collection they have of the painter and writer Henry Darger. For those unfamiliar with the work of Darger, Henry was a recluse employed as a janitor in Chicago during the 1940’s. Shortly after his death his landlords began a clean up of his small apartment where he resided for the majority of his life. As they began to dismantle his room, they uncovered stacks of paintings, journals and writing that totaled literally thousands of single-spaced pages of work that he created throughout his life. His paintings, some of which are ten feet long and double-sided, are like nothing you have ever seen. He was in a class of his own as a creator. 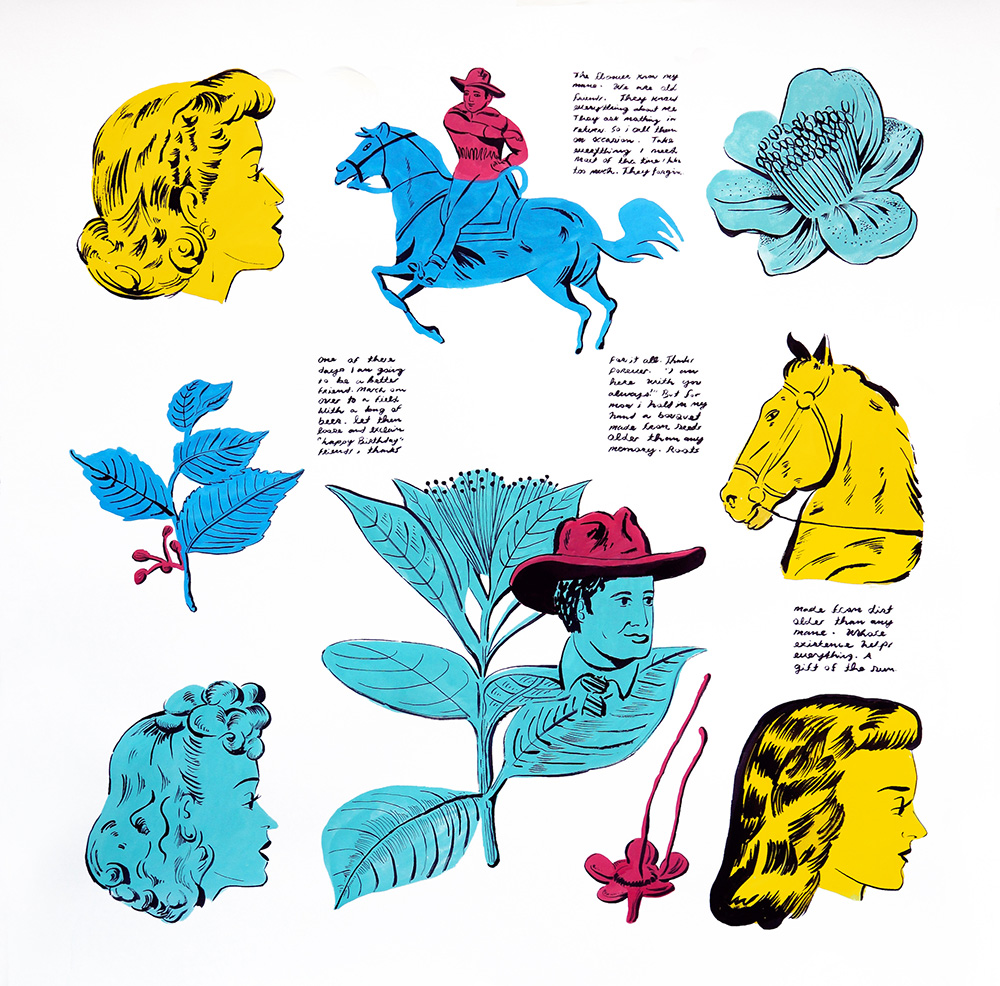 It affected me to see someone so outrageously dedicated to art. This was my first introduction to the world of outsider art. I would never be able to describe myself as an outsider artist, but I certainly relate to the feeling of creating art as a need rather than a desire.

Can you give our readers some background on your art?
I create art in a traditional manner. I usually work with gouache, which is an opaque form of watercolor, and I typically paint on paper. I buy huge rolls of 50-foot long printmakers paper that I cut in my studio to fit whatever composition I’m working on. My process usually begins with writing. I’ve kept journals since I was eight, compiling thousands of pages. I return to them for artistic inspiration. From these personal resources I do a lot of drawing on the computer. I like using the computer because I tend to move figures around the composition a lot. This gets me to the actual painting quicker. I can spend 2 to 4 days on a painting, but some work will take me weeks. The longer something takes, the more likely I am to hate it. After finishing a painting I never come back to it, which says a lot about how committed I am in the sketching process. 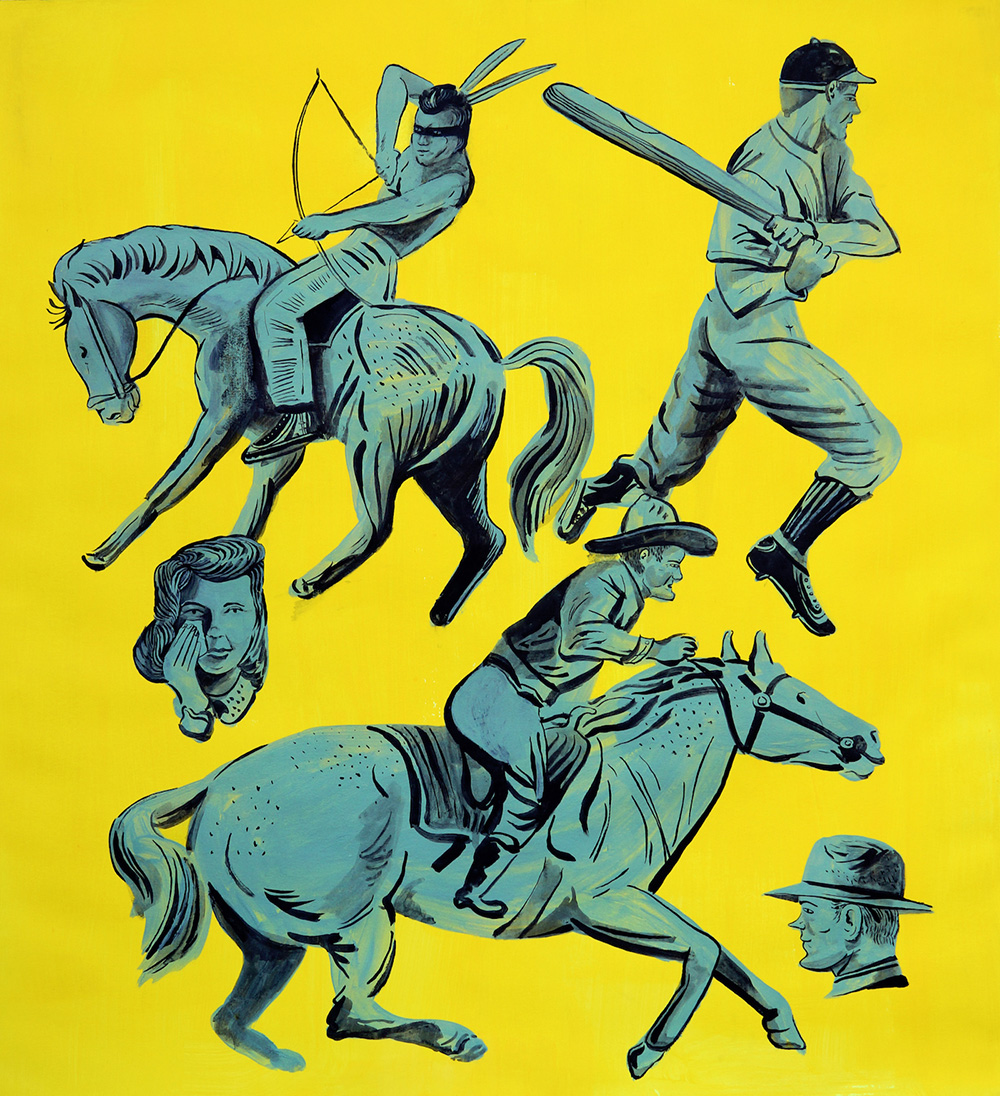 About my subject matter, one of the first ways I ever made money on my own was by selling antiques and objects I found at yard and estate sales. All of this is to say that I have always surrounded myself with objects, art and ephemera from the early and mid-1900’s, and these aesthetics inspire me. The 1950’s brought about a major movement in advertising which went hand in hand with the creation of pop art. I see the artwork I create as a way of utilizing the stylings of pop art and mid-century design to express my own narrative. I often try to flip a theme from the past on its head, which is usually presented paradoxically. Politically and ethically there is so much wrong with the entire 20th century; sexism, racism, homophobia and war. With that said, I do not create my art out of reverence for this period past, rather I create to reimagine this time period in a way I believe to be morally sound. In this way, there is a duplicity in each painting I make. On one hand, it is referential to the damages of this time. For example in my painting entitled “Votre Pensee Est Libre,” (translated “your thought is free,”) a group in matching uniforms play baseball in front of a church. The text on the painting reads “your thought is free, believe it or not.” The painting is presented as an advertisement through the use of typography and placement of visual elements. The meaning behind this work is to express that no matter what your affiliation, religious or otherwise, that you as an individual retain your free will. In another painting, titled “Faire De Son Mieux”, I depict a group of Bedouins on the desert in a circle sharing a meal in front of a palace. The text on this work says: “Do ones best, admire people who can scratch a desert and produce a garden.” I am asking the viewer to admire these people through the visual language of a 1950’s advertisement. These works are all anti-advertisements disguised as advertisements, juxtapositions of traditional advertising motifs when compared to what I admire most of the human condition. I refer to this particular series as “POSTORICAL.”