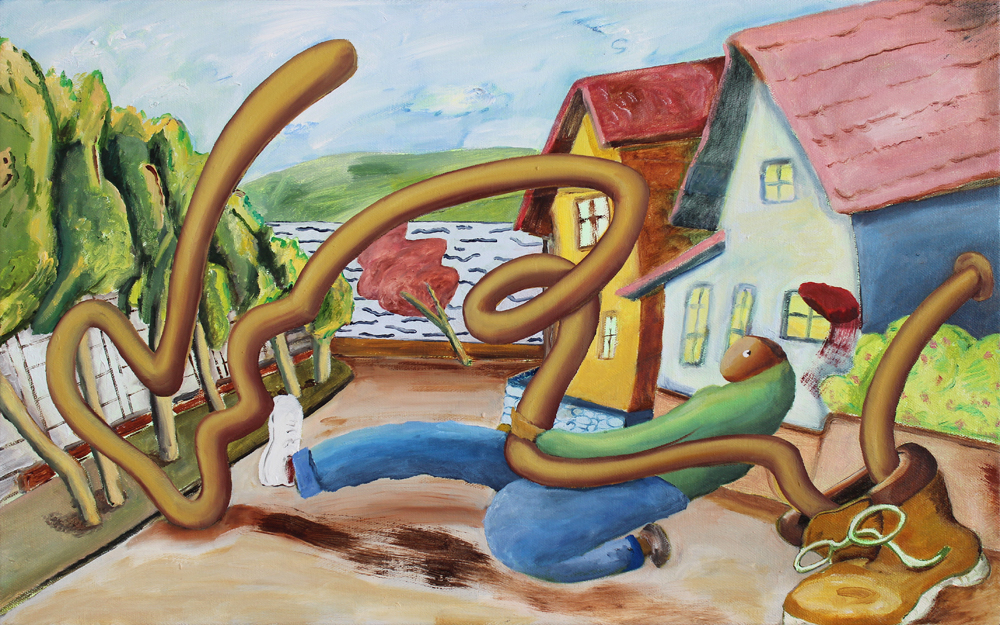 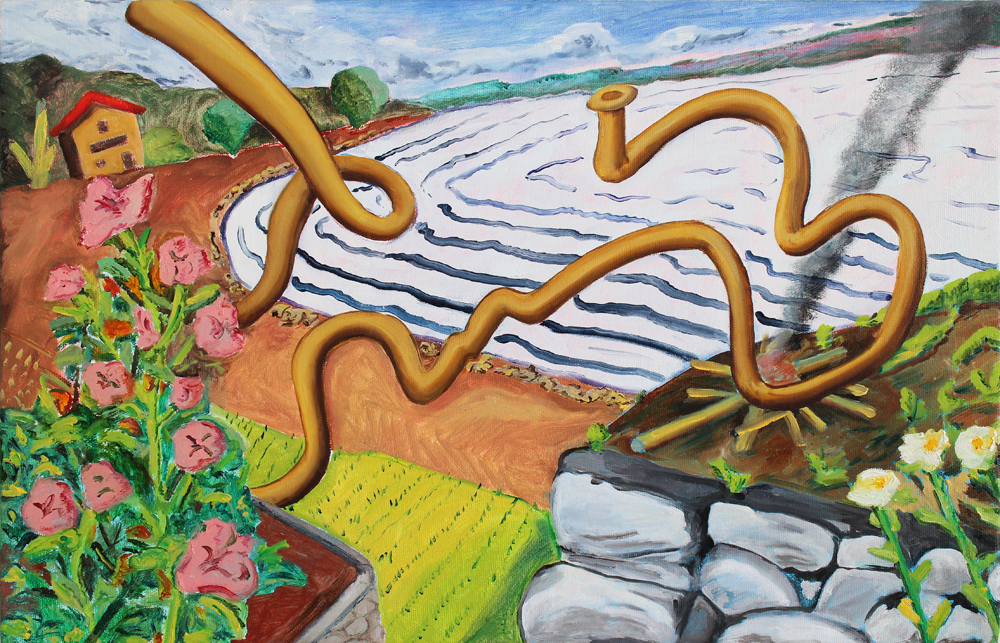 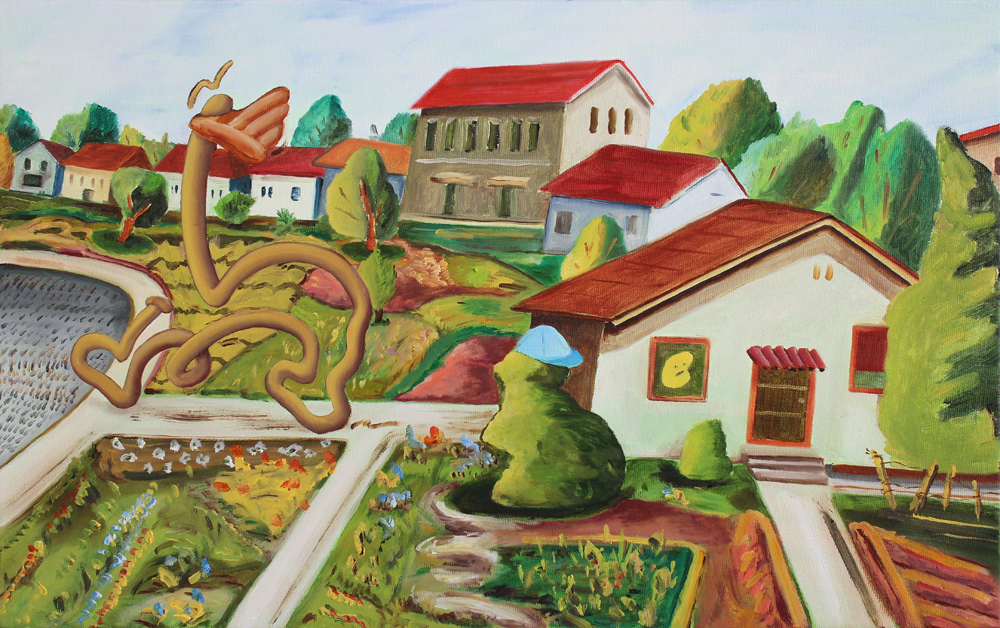 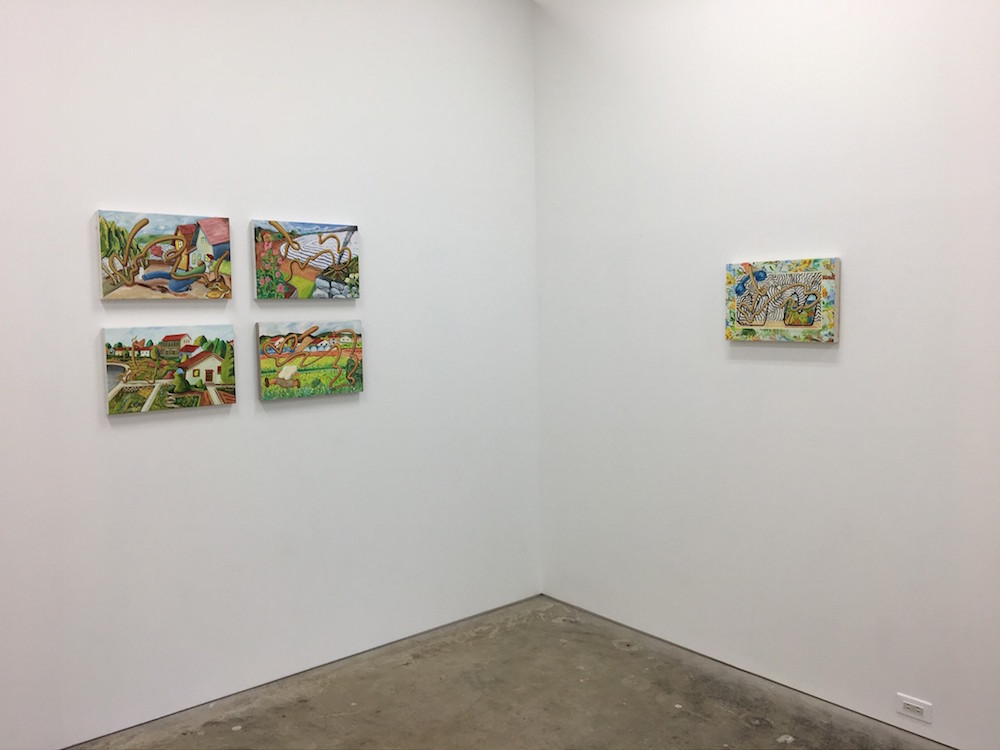 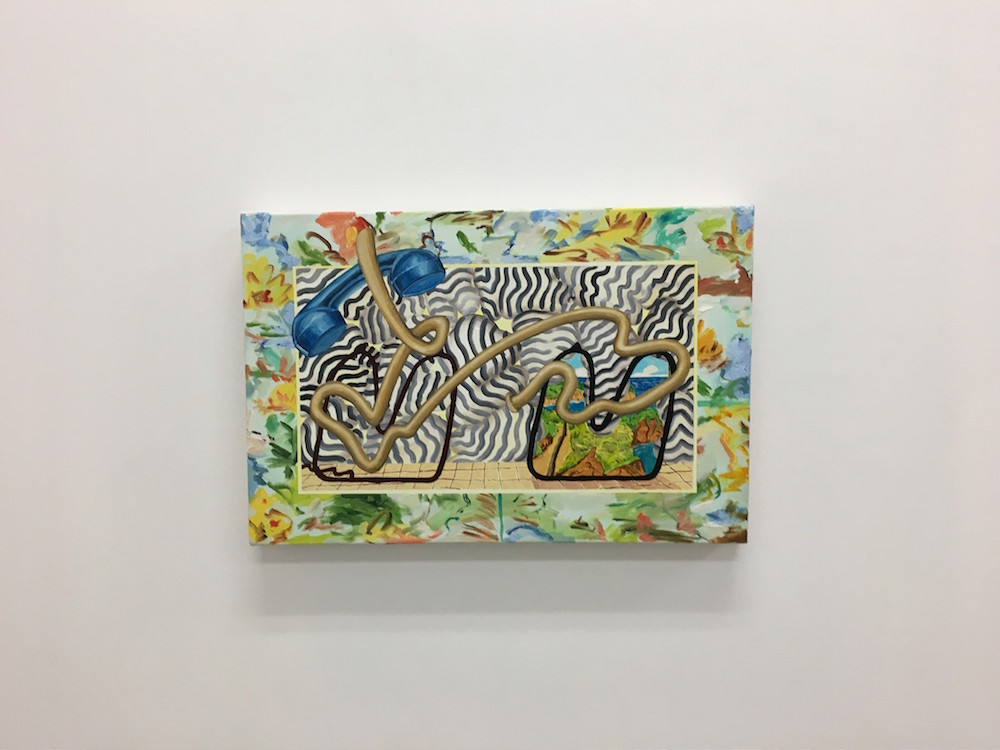 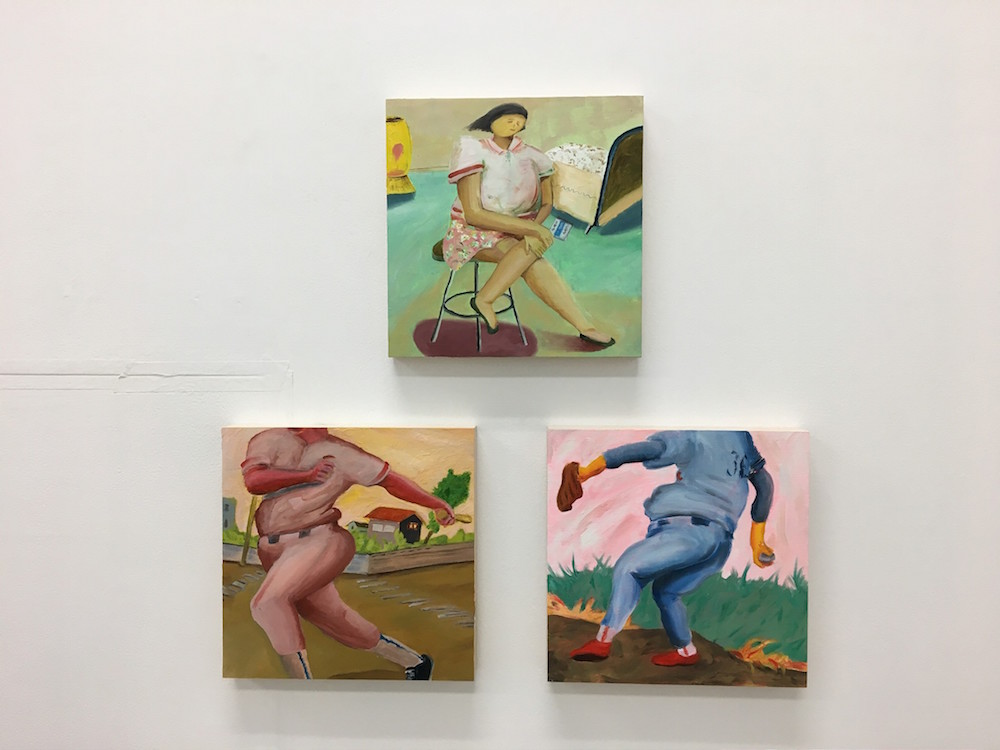 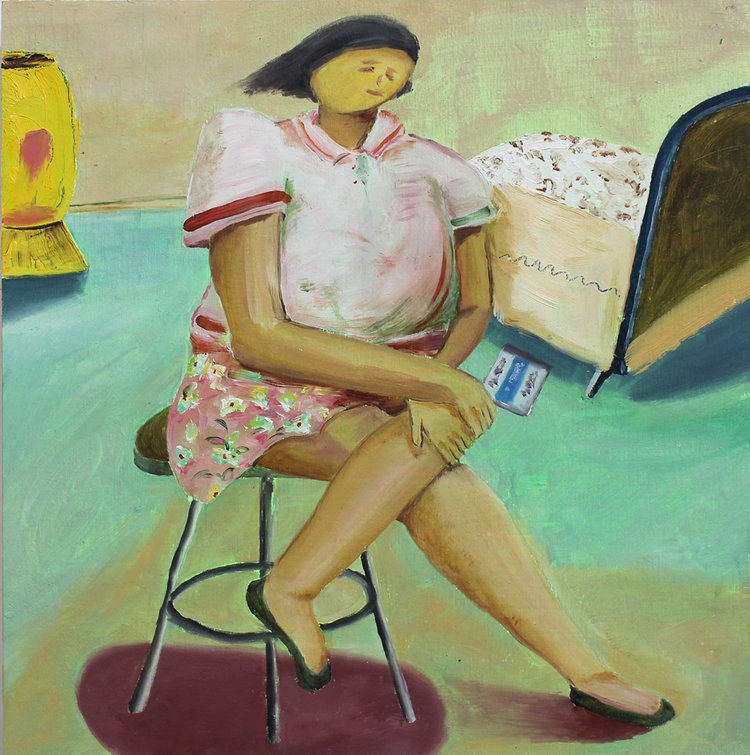 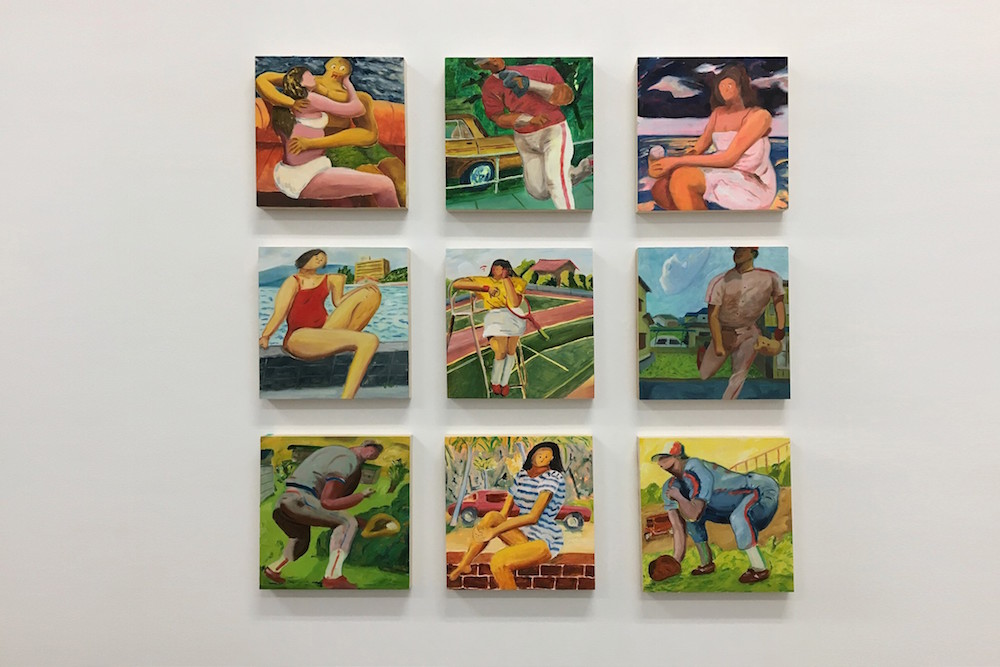 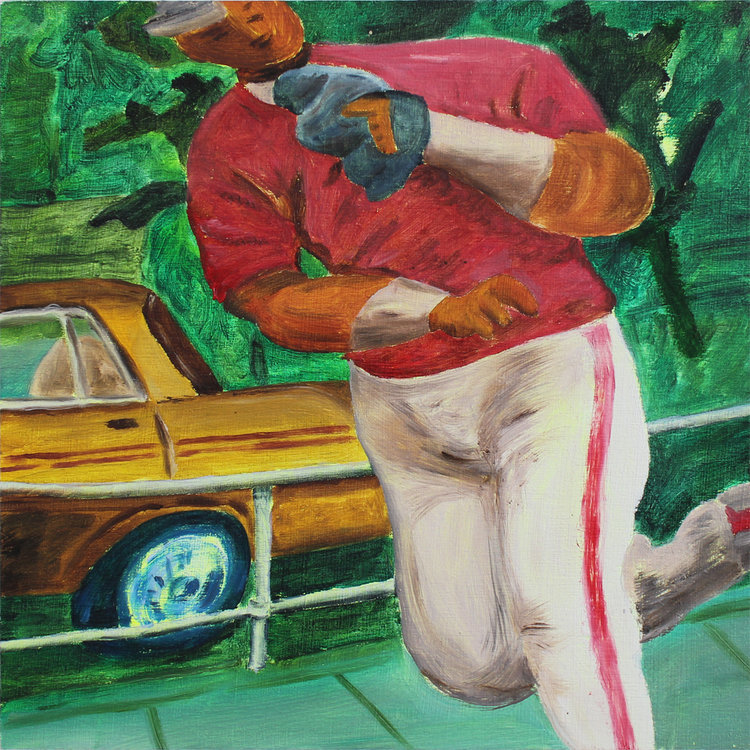 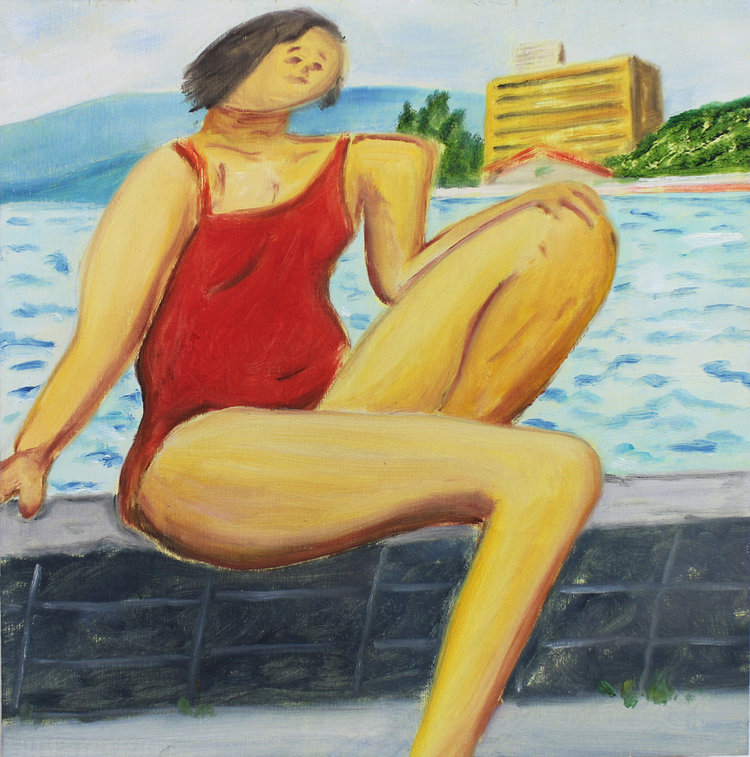 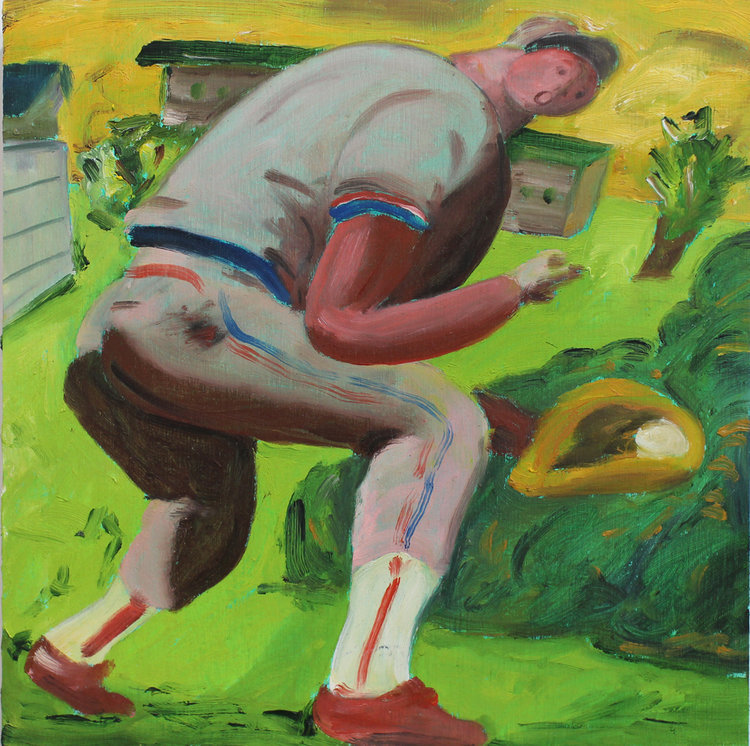 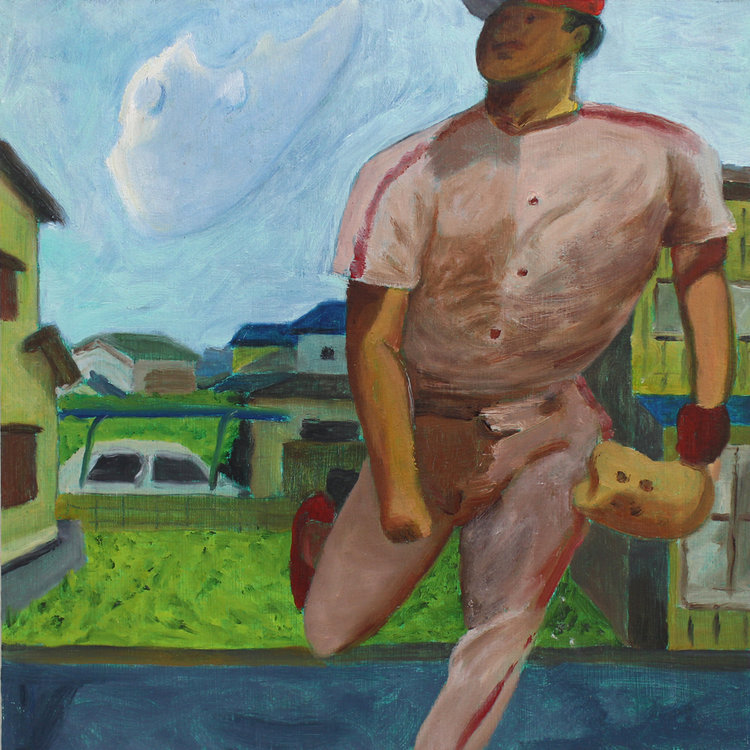 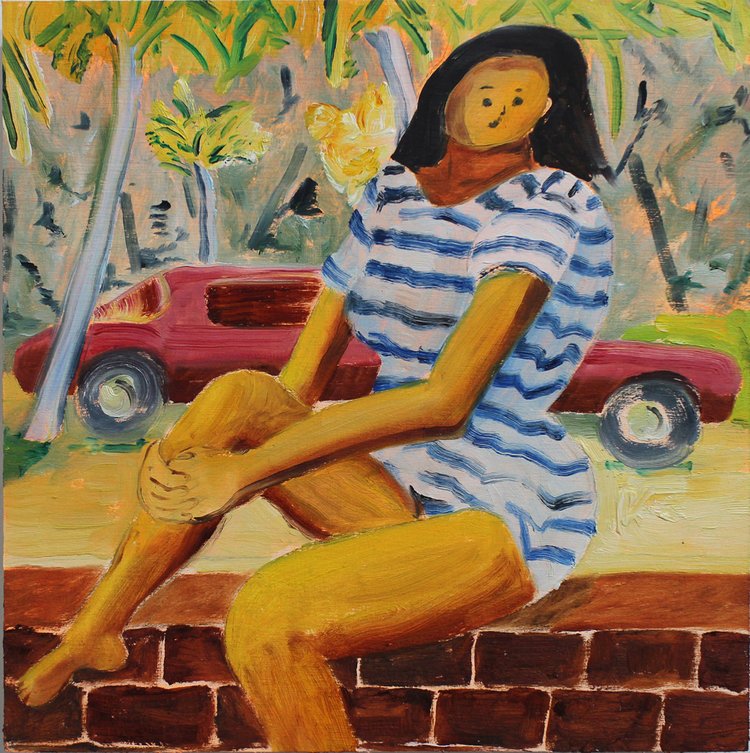 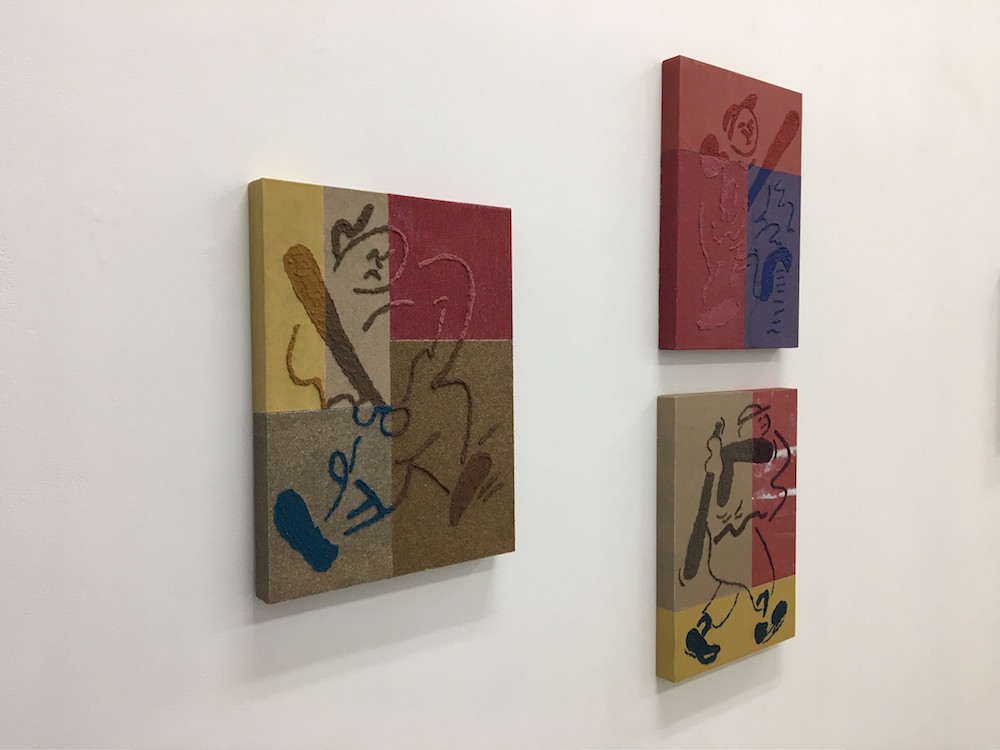 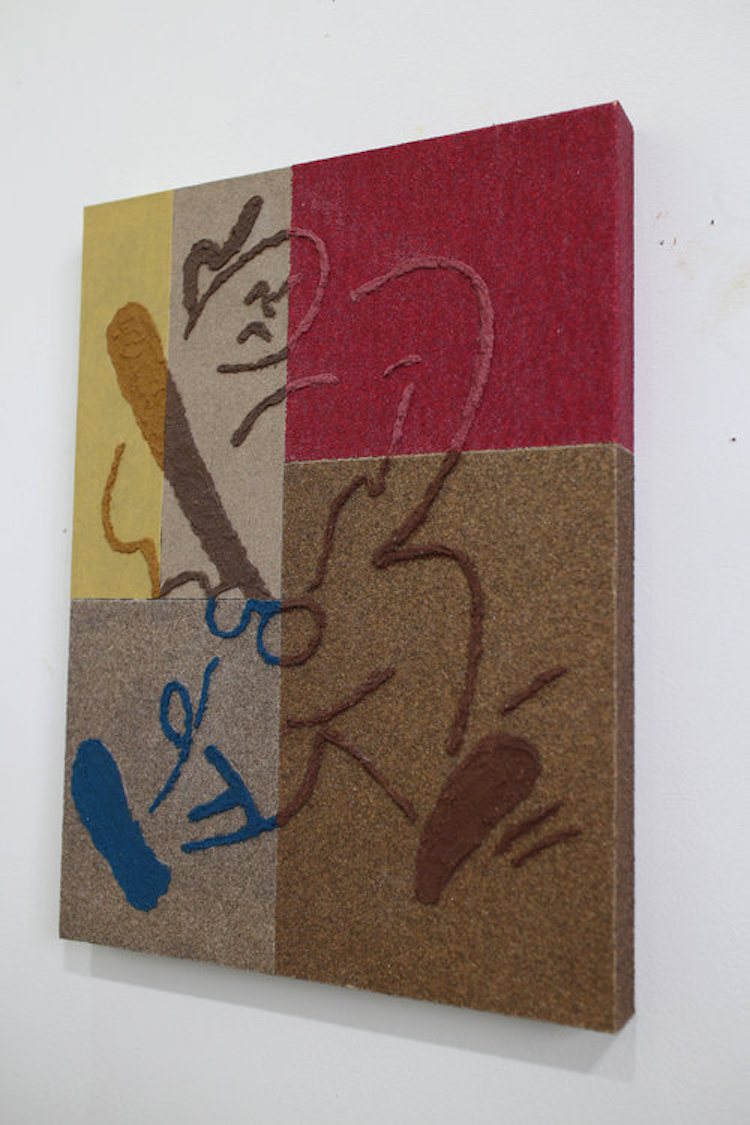 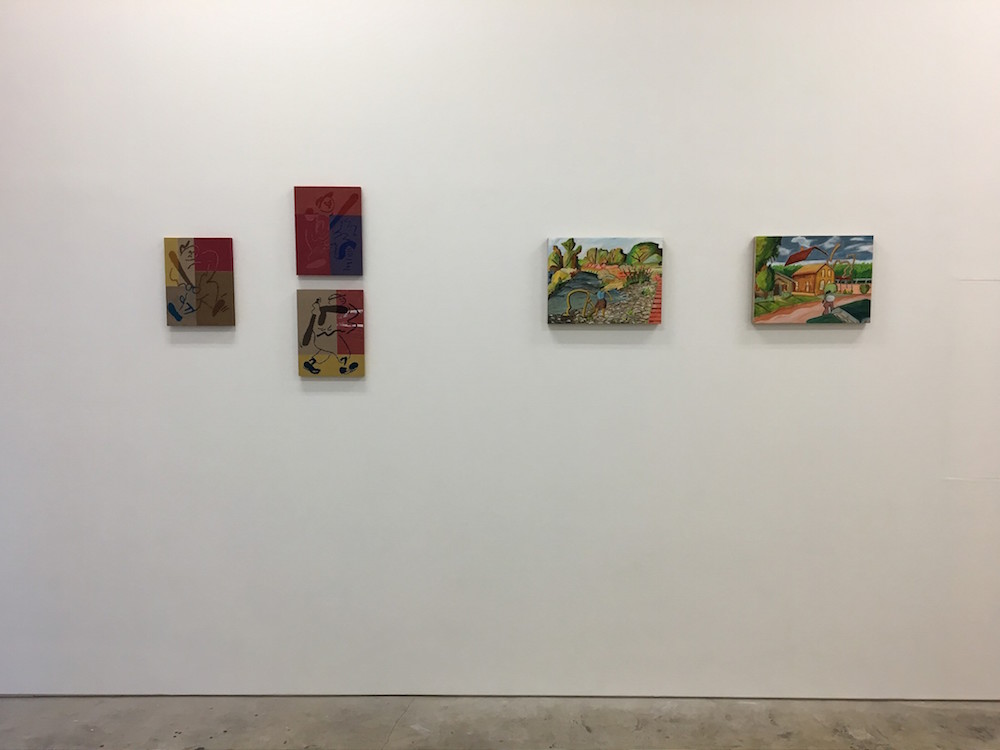 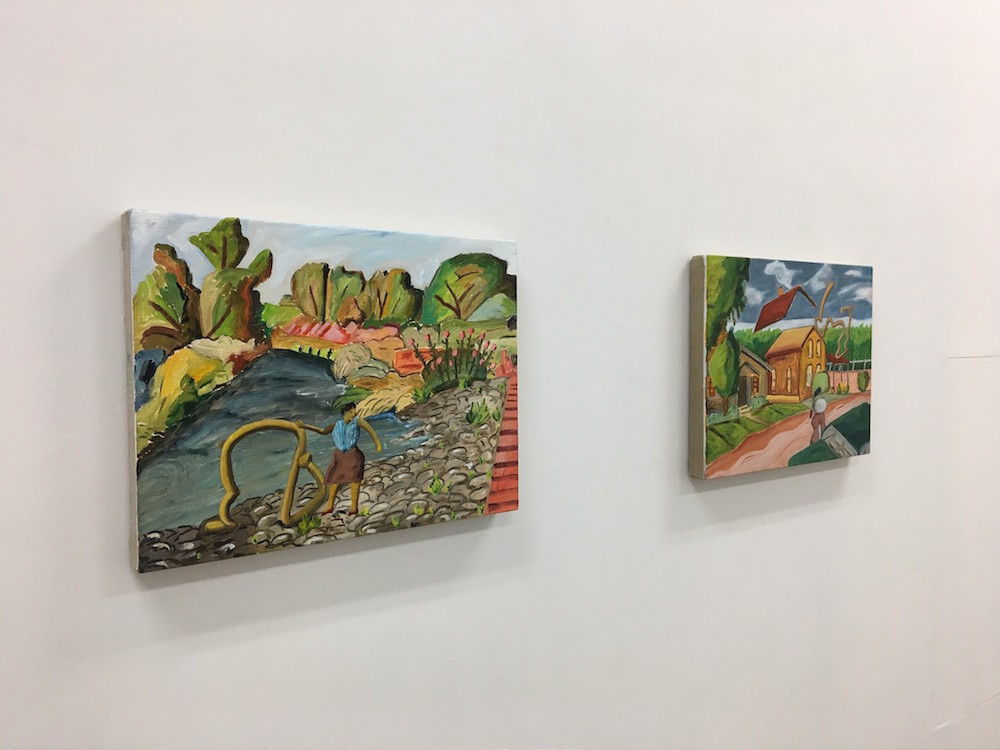 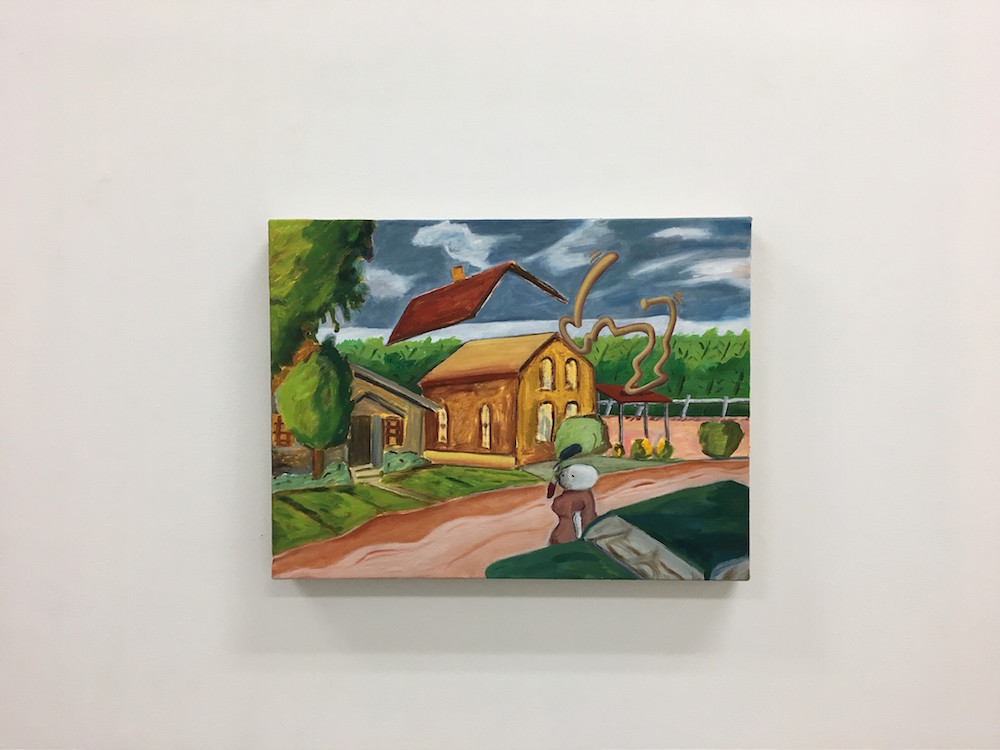 Returning to Tokyo for the first time in six years, Hiroya Kurata aptly makes his exhibition debut at Koki Arts. "I spent my youth in Tokyo," Kurata explains, "So it feels great seeing old and new friends and family here in Tokyo."

Consisting of mostly small scale pieces the artist could stow in his luggage, the exhibition further explores his whimsical Bat Walk series, explaining "It is my ongoing series of painting of a baseball bat... walking. It is my symbol of something pure and fragile, ignorant but powerful, that I tend to seek for.  Especially after having kids, I feel like I'm re-visiting my growth path through the eyes of my kids and myself as a parent. It's a point of view which reminds me that making art is something less educational and more emotional (for me)."

The askew, animated baseball bats represent a free soul traversing through a manga-inflected depiction of the Japanese countryside, creating a surreal 'East meets West' structure. "I grew up reading a lot of manga, so the elements are probably inside me without thinking. Baseball bats and players can be referred to Western culture, but for me, it's less about the East and the West because I've been back and forth so many times; it's hard for me to pin down which is which."

Love for baseball appears in Kurata's sandpaper drawings, a fresh concept he has developed in the last couple of years. "When working in a frame shop one summer, I was mesmerized by different kinds of sandpapers and started to play with it. I ended up making drawings with a concrete patch and colors that best match the material." Using an outline as the main tool to construct an image, Kurata invents emblem-like depictions of a much-loved sport. "I played baseball as a kid and joined a Sunday team last summer in New York. I was never good at it, but I think it's a wonderful sport. I love the uniform, gloves, bats, bases, fields. Everything about it. Maybe not so into following Major League Baseball as a sport, but I love the concept of it."

After the show, the artist returns to his Brooklyn home and studio to work on new pieces for a Fall group showcase curated by Joakim Ojanen at Sweden's Nevven Gallery. –Sasha Bogojev