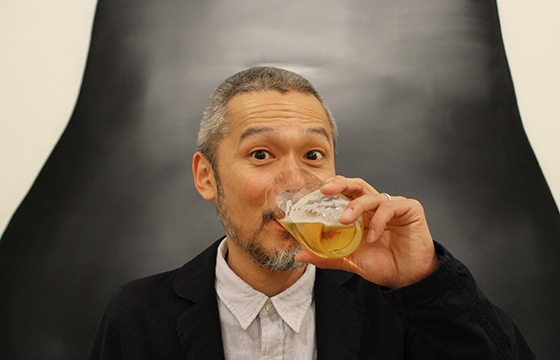 Regardless of unfortunate historic events and circumstances, the East and West have always had a big crush on each other. Japan loves rock ’n’ roll and hamburgers, and, in return, the West craves, among other things, sushi and Manga. There are exceptional proclivities, and Tomoo, of course, beyond those stereotypes, might well be the embodiment. Over the years, the Japanese artist has nurtured his love, if not his obsession, with music and wrestling culture. Through relentless research, he would discover the most obscure releases and innocuous performers, transforming them into personal heroes through work which has reached stellar fame in his homeland. At the same time, the West can’t get enough of these visuals, deformed representations of fallen celebrities, and unpredictable experiments with patterns, typography, and pretty much any form of visual expression.

The result of this love story is Tomoo Gokita achieving global status as one of its most exciting painters, regularly showing at institutional exhibitions in Japan, as well as internationally. Unpretentiously honest about his work and practice, both feet on the ground, he graciously met with me early in 2019 during the opening of his London solo debut at Massimo De Carlo gallery to talk about this work we all know, and the backstories that only he knows.

Sasha Bogojev: As an illustrator and designer, was fine art something you were striving for?
Tomoo Gokita: When I was young, I thought that any job would do, so long as it involved drawing and painting. I liked fine art, but it wasn’t something I was necessarily going towards. I’ve been through various phases and experiences, but I’ve naturally arrived at where I am now. Design work is simply for money!

Were there any crucial moments, exhibitions, images or people that marked your career direction?
I became tired of client-based design and illustration work. I wanted to draw and paint what I want, the way I wanted. I began to think this way in my late twenties.

What did your entry into the fine art world look like, and was there a particular moment that indicated it?
To be honest, I’m still not that familiar with the fine art world, nor do I understand it. So I can’t say that I’ve “entered” it, so to speak.

What did your work look like prior to what we see now?
The first oil painting that I made back when I was in high school was strongly influenced by the style of the artist Tadanori Yokoo, who was an idol at the time. I continued to create abstract oil paintings for a while after this as well.

Would you say that you were always working towards the international success you enjoy, or did that just happen?
It’s true that I have held more exhibitions overseas than in Japan, but I still have my doubts as to whether I’m “international” in the true sense of the word. I’m just going with the flow and wherever it takes me. I’m not really thinking about anything in particular.

What did your early exposure to Western, non-Japanese culture look like?
Ever since I was a boy, there were Playboy magazines and lots of jazz records in my home, so I think this was a significant influence.

Your work contains very little traditional Japanese elements. Is that on purpose?
This is the same question Yellow Magic Orchestra was asked by Western media in the 1980s: “Why don’t you include more Japanese elements (into your work)?” I have been surrounded by European and American culture since I was born, so, in fact, it’s unnatural for me to forcibly try to incorporate Japanese elements into my work.

I always felt like a Japanese characteristic in your work is the specific weirdness in depicting the Western imagery. Do you know what I mean, and were you ever looking at it that way?
What’s so weird about it? [Laughs] I was surrounded by Western culture ever since I was a boy, so it’s all normal to me. I’m guessing it’s been influenced by the masses of Mexican pornography magazines that I have in my surroundings.

How did your interest in wrestling and music start? What is the attraction and why does it inspire you so much?
Pro wrestling is an extremely fascinating genre like no other. People who don’t share the interest tend to farcialize and say that it’s all a fake fight, but they are completely misguided. Watching wrestling is simply a hobby, so it doesn't directly influence my work, but I am inspired and impressed by the spirit of wrestlers.

You’re very active in the music scene nowadays with cover design as well as DJ gigs. Would you like to expand or improve your musical activities in any way?
Music is amazing! I may even like it more than fine art! That being said, though, it’s really just for play; it’s a hobby for me. There’s that part of me that doesn’t want to turn it into work.

Do you have a favorite type of music?
I like music with soul.

I’ve always felt that American wrestling or Mexican luchadores have their glamorous and dark sides, even funny and sad. I also had the same feeling about your work. Do you think that is a coincidence?
Pro wrestling is where the real and the fake intersect. There are some wrestlers who are strong, yet lose. There are some wrestlers who are weak, yet become champions. Perhaps this manifestation of funny and sad is something that subconsciously comes to the surface in my work as a result of me having watched this world of wrestling over many years.

It feels like you took that “famous but sad” idea onto vintage movie stars, pinups, even family portraits. Would you agree?
Yes, I agree! The melancholy of the entertainer!

Is that atmosphere of duality the reason you restrict yourself to such a limited color palette, too?
That’s not exactly the reason. I just can’t be bothered to use lots of colors. The colors get in the way. They are too noisy.

Did you ever consider using other colors and what do you think should happen for you to do so?
I’ll be using color in the near future. I was working in full-color when I was younger.

In addition to the monochrome color scheme, the facial and body deformations of your subjects are a signature feature. How did those develop, and how do you feel about it now, after all these years of working with it?
I’m already tired of this style. I want to go to a different world. It’s something I pretty much think about every day.

Although those portraits are your most recognizable works, you constantly play with all sorts of other imagery, from still lifes to abstraction. Do you go through phases or make different types of work all the time?
It’s a really difficult issue, but I try not to focus on quantity over quality.

Your technique looks flawless no matter the motif. The way you manipulate paint, create surface, light, depth, and gradients look so natural and effortless. Do you feel that way too?
I agree with you! Because I do have the skills and techniques! But it’s my technique that can, at times, become a burden. I want to throw away my skill; however, it's impossible to be entirely rid of something that’s deeply engraved within you.

I remember you telling me at Bill Brady Gallery in Miami a few years ago that a single canvas takes you only a couple of hours. Have you always worked fast and why do you prefer it?
I want to finish work quickly so that I can have a beer. Or so that I can go to the record store. Those are things that motivate me!

Do you enjoy technical and conceptual creative challenges?
I’m constantly challenging myself. There’s no doubt about that. People say all sorts of things because I paint very quickly, but time isn’t the issue. The important thing is the strength and concentration of the work.

What do you have planned for the future? Are there any major goals you’d like to achieve?
Screw plans for the future! No one knows what may happen tomorrow. One step ahead is complete darkness! All I can do is plow ahead, naked, and into the darkness!