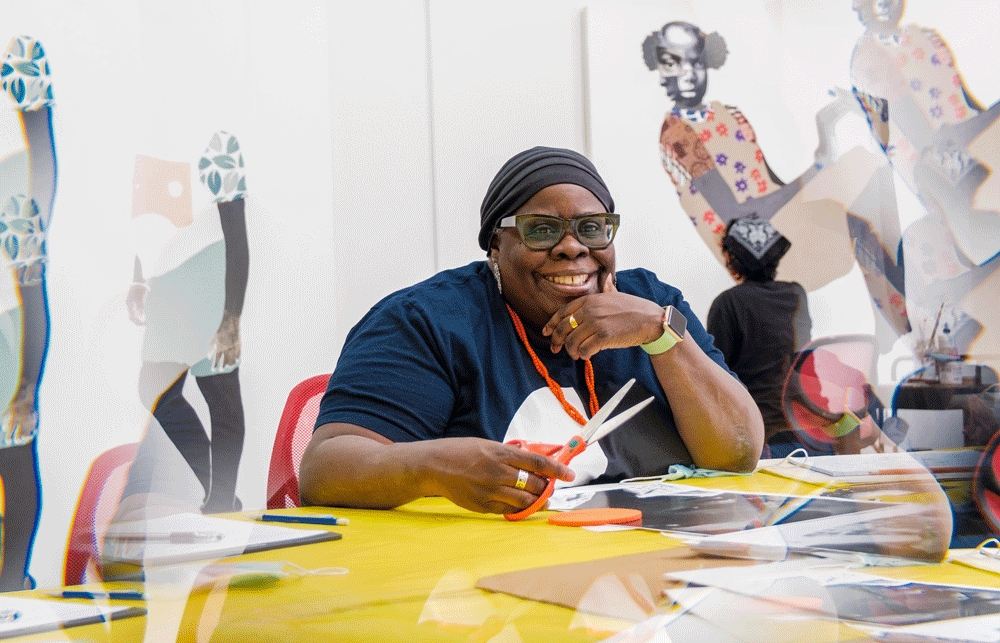 By third grade, Deborah Roberts knew she’d be an artist. What she couldn’t anticipate was that she would become a household name by exploring themes of race, gender identity, and what it means to be vulnerable as a Black person in America. Early in her career, when Roberts worked primarily on paper rather than canvas, she showcased small paintings and drawings depicting Black Americana—those elements of daily life from which the media had largely moved away. Through her works she shouted, “This is who we are!”
The artist earned her MFA from Syracuse University in the mid-2000s, and it was around that time that her work began to undergo a shift. Roberts embarked on a journey of scholarship, one in which she set out to break down stereotypes: to deconstruct the trope of the out-of-control Black man, the over-sexualized Black woman, or the adultified Black child. These stereotypes, the artist found, had become a currency of sorts—yet the world she inhabited was far more nuanced. From there, she began tackling colorism, seeking to shed light on the beauty of the Black experience in America. The outcome is calming, visually stunning, and effective at breaking down stereotypes. Those “smooth spots,” according to Roberts, which represent the beauty of the Black experience, deserve more attention.
Of course, racism in America and around the globe is a never-ending source of material for Roberts. The mixed-media artist addresses this by spending downtime scrolling through her phone or laptop, reading the news, or searching social media until she experiences a trigger. From there, she’ll journal or take screenshots of the incident, then allow that idea to simmer for some time. Roberts will scour the internet in search of new faces she can use as inspiration for her portraits—faces she prints out and reshapes to integrate into a collage. She makes a conscious decision to use source images that depict strangers rather than friends and family; this way, the artist explains, she can avoid destroying an existing image (something Roberts must do in order to achieve her desired outcome), and instead blend the images of Black people from all walks of life—furthering the notion that there is no monolithic idea of Blackness.

"I need to find the time and learn the process of listening and writing and seeing..."

I really like that, because some artist is going to pick this interview up in ten years, and they're going to wonder what was Deborah Robert thinking when she was in her studio. Tell me, what are you thinking about as a final question when you're making your work and what do you want to say to the world?
Well, what I want to say is that you can love Black culture, but you also have to love Black people. And you have to love us in the vastness of our beauty and see our humanity. And another thing, you’re going to have to stop picking on our children. Whatever you think of Black people, you cannot mistreat Black children. They are kids, they are vulnerable, and they need our support and our love. And we need all children to be wrapped around the hands of adults and not pushed and treated unfairly. So that's the main thing that I really want to show in my work. I wanted to tackle some other cues with suicide and weight and other things and bullying that kids go through. But this notion—every time you pick up a magazine or get on the internet, someone has done something very horrible, whether it be law enforcement or teachers, or just a stranger to Black children. And I just don't get it. I don't get it.
@rdeborah191