At the Drive-In: Don’t Call it A Comeback

We sat down with ATDI’s Cedric Bixler-Zavala and cover artist Damon Locks to talk about the making of the band’s art, stage direction and bouncing ideas between artist and band.

When El Paso, Texas super post-punk band At the Drive-In announced a new LP after almost 17 years since their last album, an immediate buzz shook the music industry. Sure, everyone loved the post-ATDI band Mars Volta, but give us "One Armed Scissor" for the office playlist any day. As the band prepped the release of in•ter a•li•a, out May 5th on Rise Records, we sat down with ATDI’s Cedric Bixler-Zavala and in•ter a•li•a cover artist Damon Locks to talk about the making of the band’s art, stage direction and bouncing ideas between artist and band. 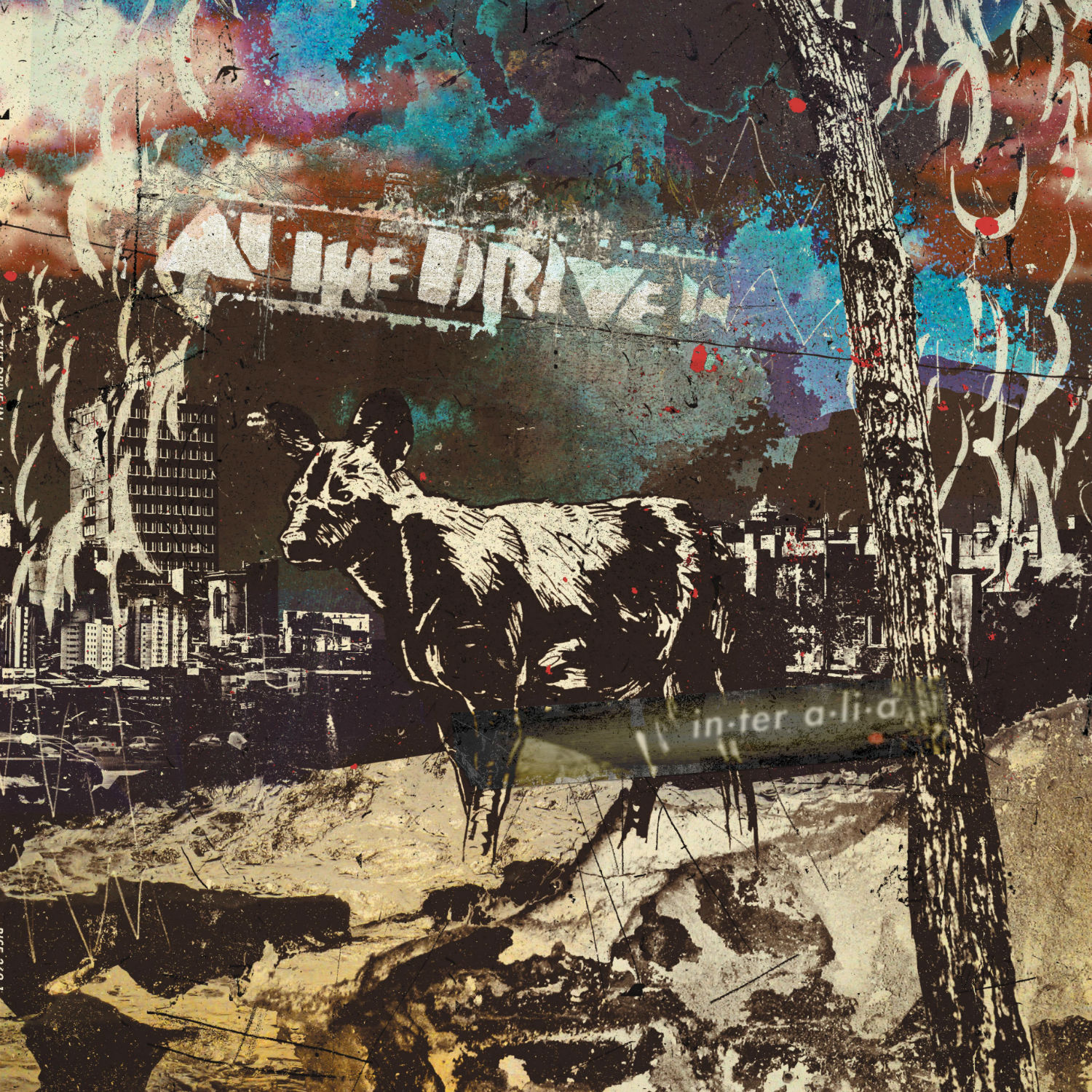 Mike Stalter: Your music often incorporates sounds and structures that are atmospheric, like a visual version of sound. How important is the consideration for the visual elements that represent your band, both in terms of the album packaging but also your stage show?
Cedric Bixler-Zavala: It's one of the highest priorities. I'd love to trust an audience with their interpretation but that's a bit of gamble. I don't trust their interpretation. Not everyone grew up with my pop culture references or my obsessions, so I really put up a passionate argument when it comes to visuals or sounds as visuals. It can be a long explanation internally within our group. Once everyone agrees on the direction, we all start sending each other clips and pictures to get on the same page. Choosing the right words, backdrops, interludes or live regalia cements the direction of what you want to portray. Hopefully, it's done in such a way that removes the training wheels of perception at just the right moment that the audience doesn't expect it.

How did you come to meet Damon Locks?
CBZ: I met Damon in 1994 when At The Drive-In opened up for his band Trenchmouth in El Paso at a venue called The Attic. We had gotten their record from the club and asked if we could open. I was instantly obsessed with their sound and their look. Being from El Paso, you rarely saw or heard something so striking. They looked like a dystopian cadre of avant-garde beatniks that lived day to day in a van. We just kept in contact since then and Damon's music and visuals have had huge impact on many projects I've been a part of.

Damon, what goes through your mind when you're trying to come up with art that's an extension of the music of a band like At The Drive In?
Damon Locks: I have been down with the ATDI guys for a long time and have been affiliated with their aesthetic for years. I have done art for them, as a group, and for Omar Rodríguez-López in the past. I believe my first record cover for a band that wasn’t my own was Relationship of Command (done with Jason Farrell). It is almost like I have a hard drive in my brain for the work I do that speaks to them. I just go rooting around in that section looking for stuff that fits. I do get some direction from them, but they give me a lot of liberty. I think it’s a natural fit.

What was the process like in working with him to create the visuals that accompany the new album?
CBZ: We had many phone calls where I would throw around ideas about what kind of snapshot of life the band was trying to convey. Having already been obsessed with his art, I knew what was going to work. I'm a fan of his cityscapes, so when the band was molding the idea behind the music, I just knew Damon’s aesthetic was the right setting. We went back and forth trying to find the right desolation for the cover. In my opinion, some his work feels like that... a story told by the walls of the buildings. On top of that, he has an amazing eye for animals, so we kinda fell into this hyena standing in the midst of the rubble. We had used hyena references on the last record when Iggy Pop improvised a ransom phone call for a song called “Enfilade.” By chance, he had this hyena, and I was making more references to it anyway, and it all just fell into place. 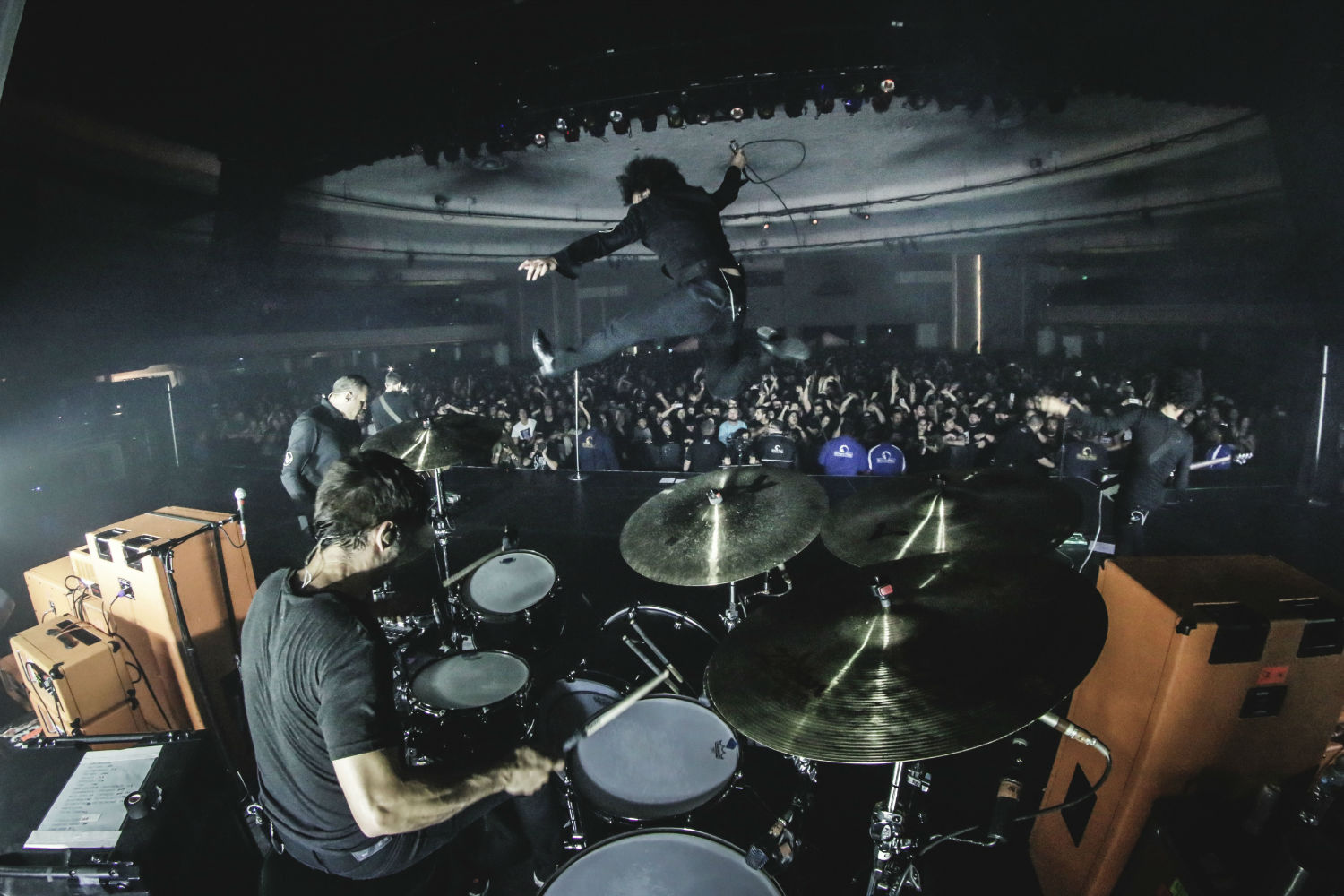 Damon, do you feel like being a musician in addition to being an artist helps you make connections between the two, and how does that impact your artwork?
DL: Definitely being a visual artist and a musician has an impact on my work. These days, there is a big crossover between the two disciplines. The ideas bounce back and forth a lot and I am working hard to increase the possibilities between the two.

In doing some research, I saw a video where you made the statement, "If I was going to make work, I would want to make work for the real world as opposed to the art world." Can you elaborate on that a little?
DL: I am more interested in the lives of people than the world of art. I work with Prison and Neighborhood Arts Project teaching art at Stateville Correctional Center. I just finished co-teaching a 5-week unit at Ida B. Wells Preparatory Academy in Bronzeville for 3rd-8th grade through an organization called ArtReach. I am collaborating with a youth dance group making the music for a performance at the Museum of Contemporary Art here in Chicago. I am also doing sound design for a theater piece with Free Street Theater. These are things that improve my work and enrich my practice. Interacting with people is what I need to do to make strong work.

At the Drive-In’s new LP, in•ter a•li•a is out now via Rise Records and on streaming services.

Originally published in the June 2017 isue of Juxtapoz Magazine, on newsstands worldwide and in our web store.