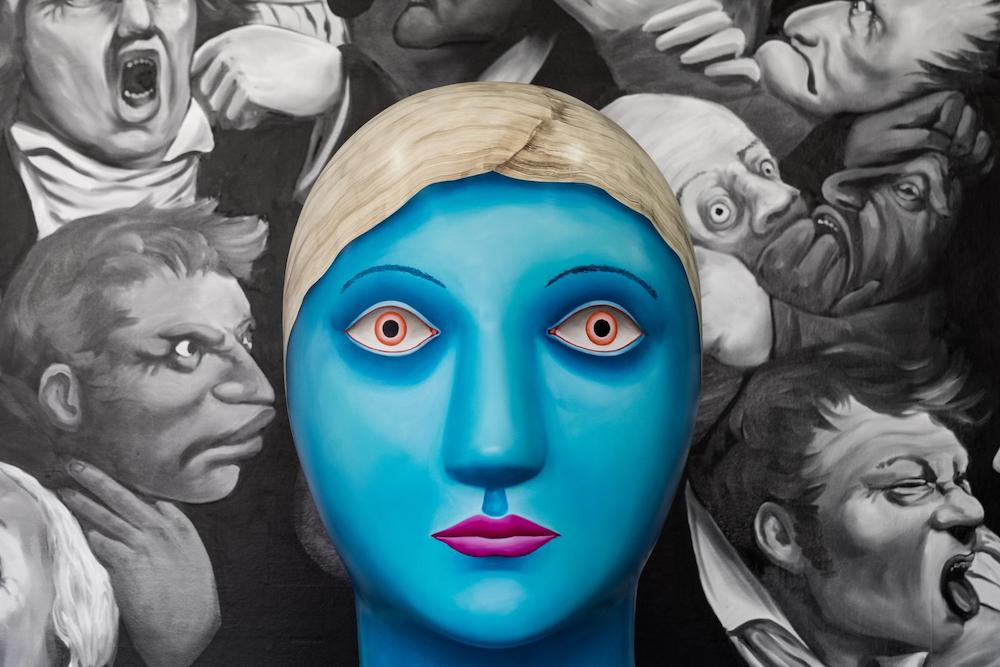 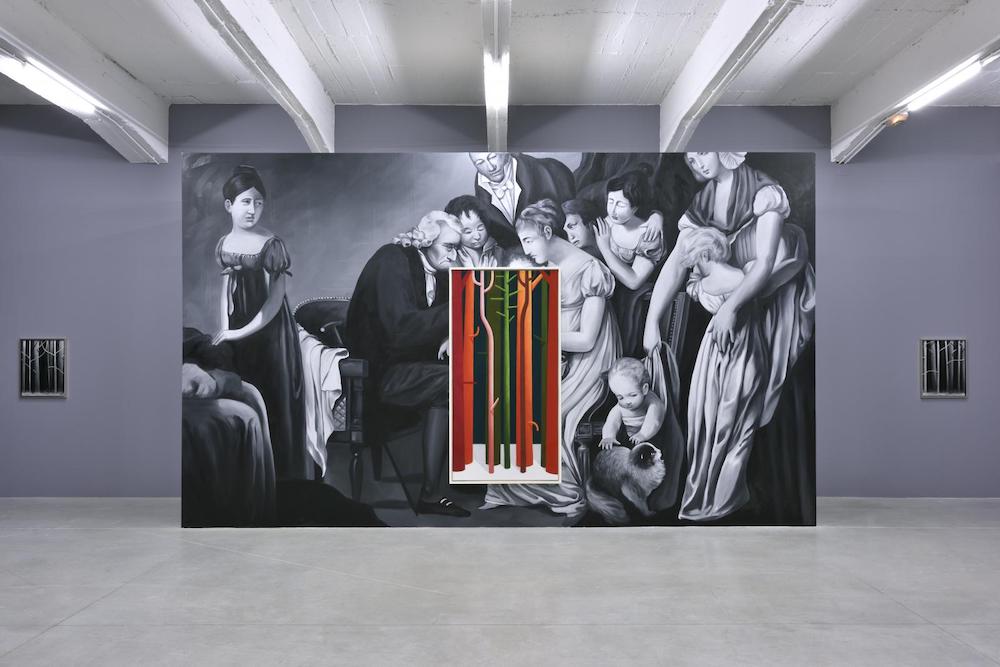 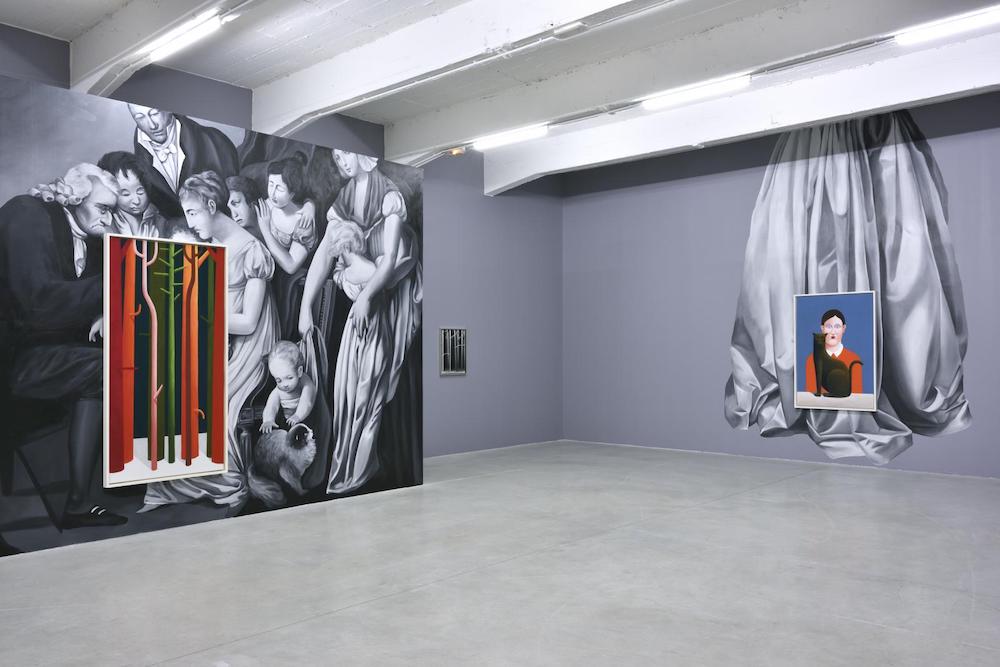 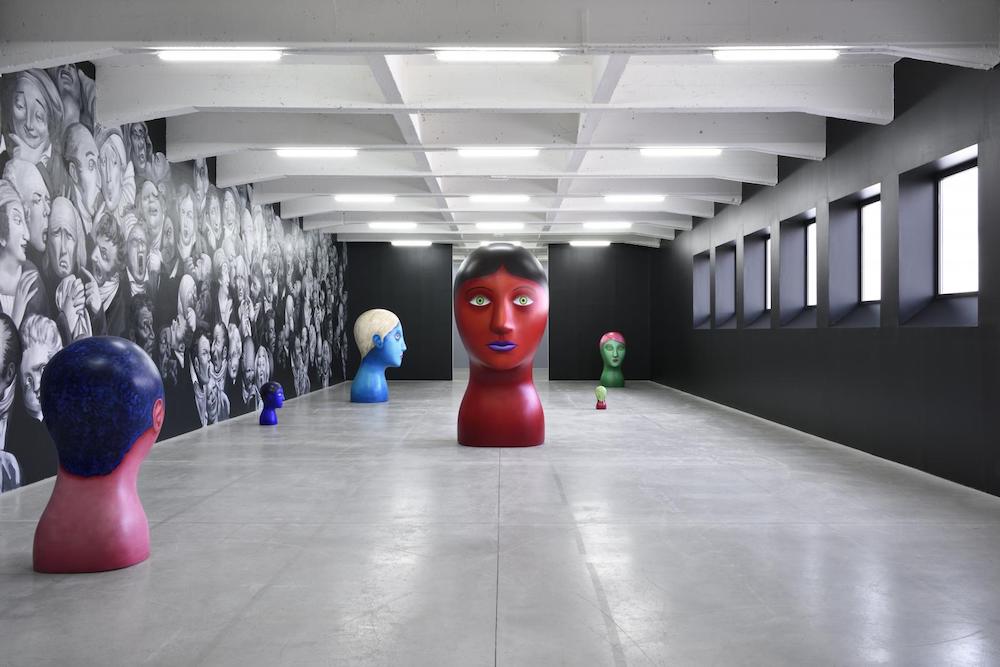 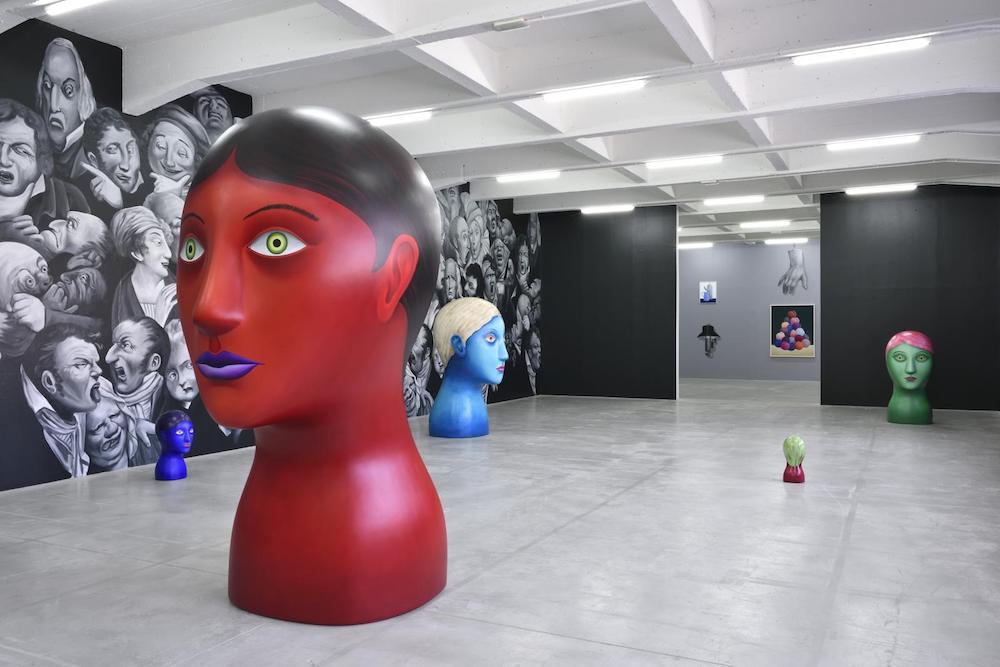 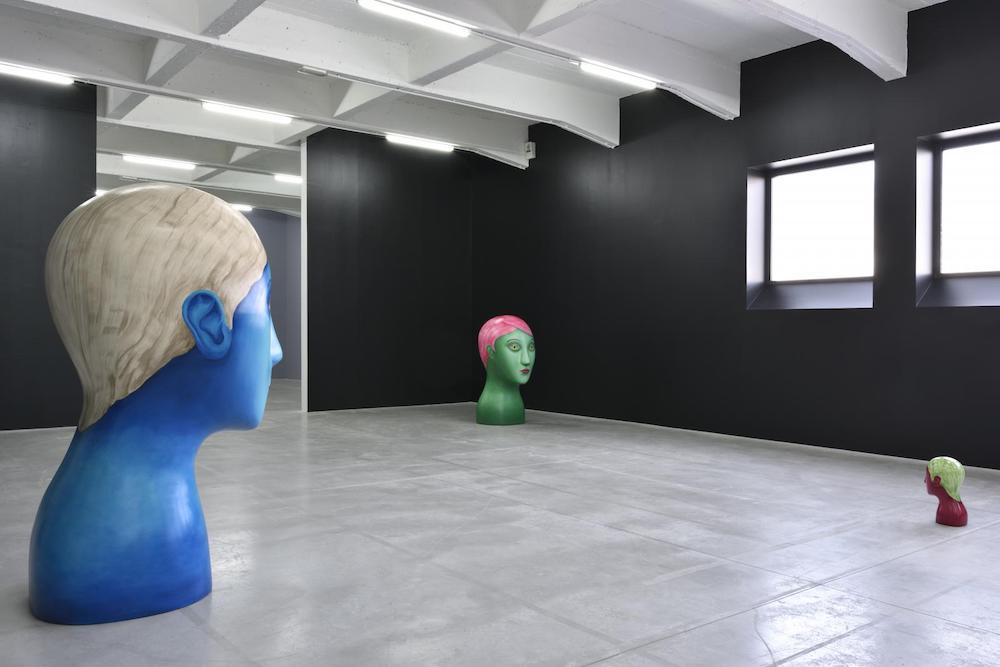 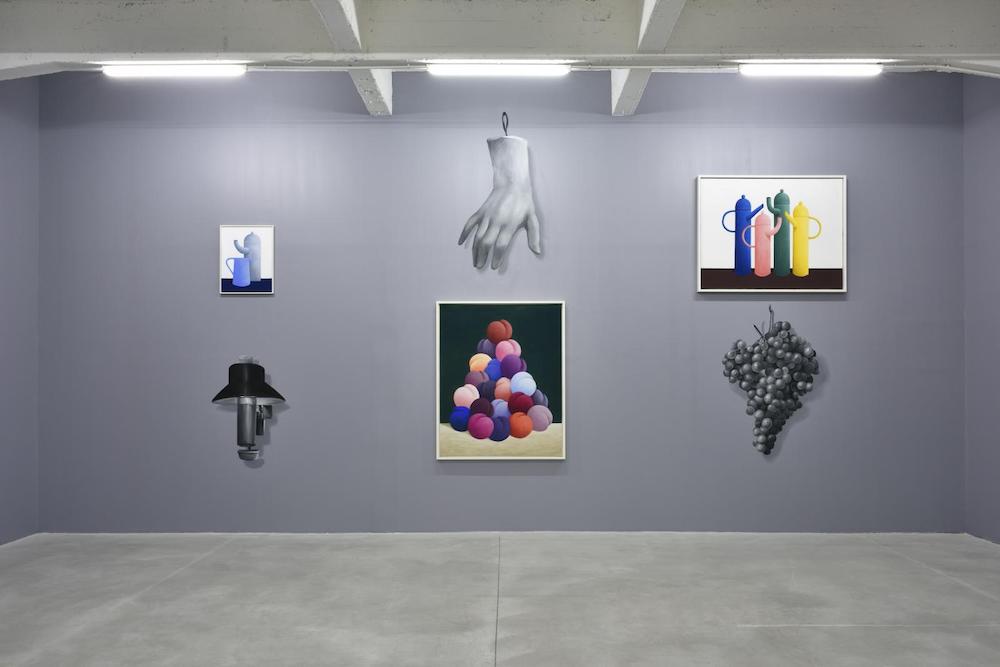 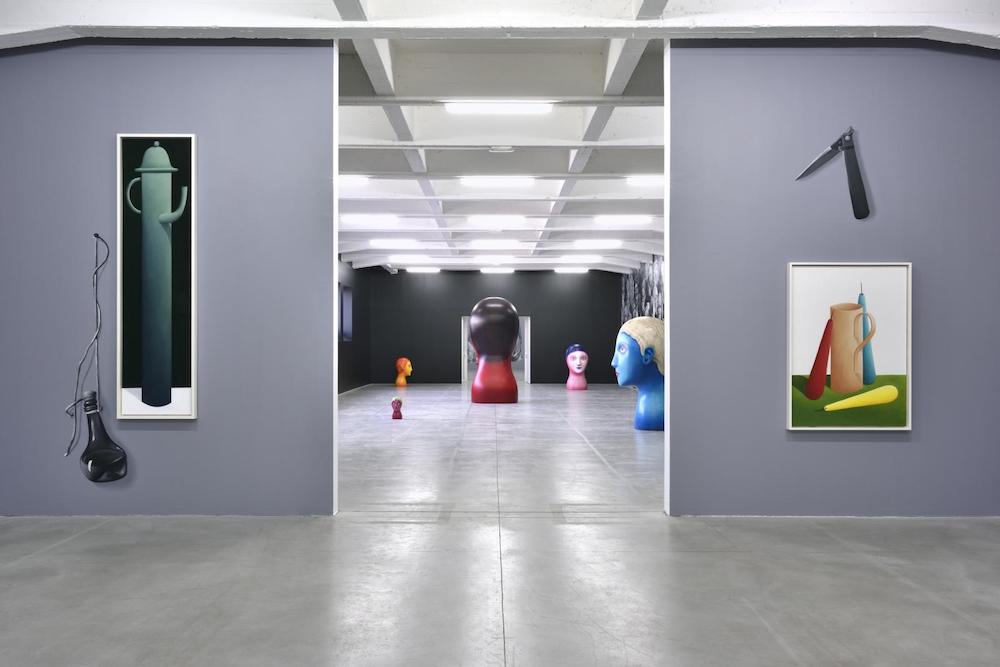 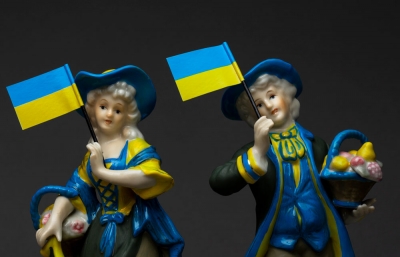 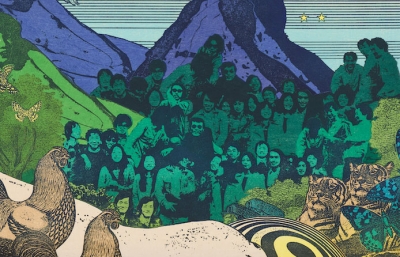 Coinciding with Genesis Belanger's showcase we've featured recently, and on view until the end of this week alongside exhibitions by Heiji Shin, Jill Mulleady, and Bertrand Lavier, Consortium Museum in Dijon, France, is also hosting a solo presentation by Nicolas Party. Constructed around the figure of Louis-Léopold Boilly and in particular his black and white work featuring expressive caricatures and grimaces and trompe-l'œil technique, Boilly explores the dialogue that gets created by collating or displaying together works from different periods and by different artists.

Taking a small lithograph Réunion de 35 têtes Diverses (Reunion of 35 Different Heads), as a starting point for his research, the artist we've featured in our Fall 2020 issue developed a pattern-like composition from the original image and turned it into a large-scale mural. "I started doing graffiti when I was 12, so that was a lot of “murals” [laughs]. When I finished school, I had this kind of art space in Lausanne with two other friends, and we organized shows and things. We’d put different stuff on the stage, the walls would be painted, and so on. When I got to Glasgow, I kept going with those walls and when I started having shows, I was also doing a lot of murals," Party told us during our 2020 conversation, explaining his relationship with site-specific installations and wall paintings he has been creating for his presentations worldwide. But the admiration for the work of a French painter that was arguably most known for introducing the term trompe-l'œil, was more revolving around his caricature-like portraits. Created at times when portraits were bland, expressionless, and not even a subtle smile could be recognized in the image, these were similar to "tronie" paintings from the Dutch Golden Age painting and Flemish Baroque painting. Instead of focusing on portraying the individual, the depictions of exaggerated facial expressions were studies of appearance, type, physiognomy, or an interesting character.

"The show is basically half his work, but kind of copied and reproduced by me and my work," the Swiss-born and NYC-based artist stated in a video interview which is introducing the exhibition. Connecting Boilly's grisailles visuals with his colorful bust sculptures or pastel paintings, Party puts the work in a dialogue, while further exploring the collage-like technique to constructing work with elements stemming from different influences. Such an approach allows him to emphasize the subjects of interest by comparing them with a historically recognized or approved work, as well as underlining certain aspects of those works by recreating them in a different context and scale. "When I do this superposition, I think for me the first is trying to put two things on top of each other without any agenda and to see what's happening and what meaning comes out of it," the artist explains the visual remixes he is creating through such an approach, capable of alternating both his and works by others. An example of such effort is the placement of his colorful forest setting against Boilly's pen and black ink drawing on paper, The Vaccine. By obscuring the 19th-century image of a child receiving the substance with an ambiguous yet appealing image of stylized trees, the artist transports the scene into the present day but without making any statements or conclusions. Simultaneously, by pairing his polished head sculptures of various sizes with the pattern of monochrome grimaces, he is bridging the centuries-wide gap between the 19th-century and 21st-century aesthetics while exploring how the perception of his numb-looking works is influenced by the large, expressive mural hanging over them.

The last room of the exhibition is paying tribute to the still life format and Boilly's contribution to the development and the utilization of trompe-l'œil technique. Employing the effect of the optical illusion, Party is contrasting his softened, highly stylized still life composition against the elements cropped from the works by the French painter. Rendered in black in white and deceptively "hanging" on the walls, he is constructing an authentic saloon hang setting in which his pastel paintings are displayed alongside random "objects". This way of presenting the works also imposes the question about the complexity of the figurative painting, both in the context of technique, aesthetic, and subjects used, as well as its placement in a greater art canon. —Sasha Bogojev