Today, we are so excited to premiere Part 1 of Facing the Giant: Three Decades of Dissent, a documentary on 30 years of Shepard Fairey and his Obey Giant project. Having covered Shepard's work for years, most recently on the cover of our 200th issue, and while celebrating our own 25th anniversary as a print magazine, we share a kinship with Shepard and his career as a global icon for street art. As Shepard embarks on a busy summer commemorating his own three-decade career, enjoy Part 1 of this new doc on the evolution of his practice, as well as see more information about the film and his decades of projects.

Facing the Giant: 3 Decades of Dissent the punk beginnings of a 19-year-old Shepard Fairey up to his current life as 49-year-old artist, activist, punk, father, and husband who journeys through trials both metaphorically and literally. Shepard Fairey has always spoken his mind through his art, and this latest exhibition reflects the continuity and evolution of his art and his concepts over the last 30 years. The title Facing the Giant references Fairey's massive, early dissemination of Andre the Giant stickers, but more importantly, the giant issues he confronts with his art. 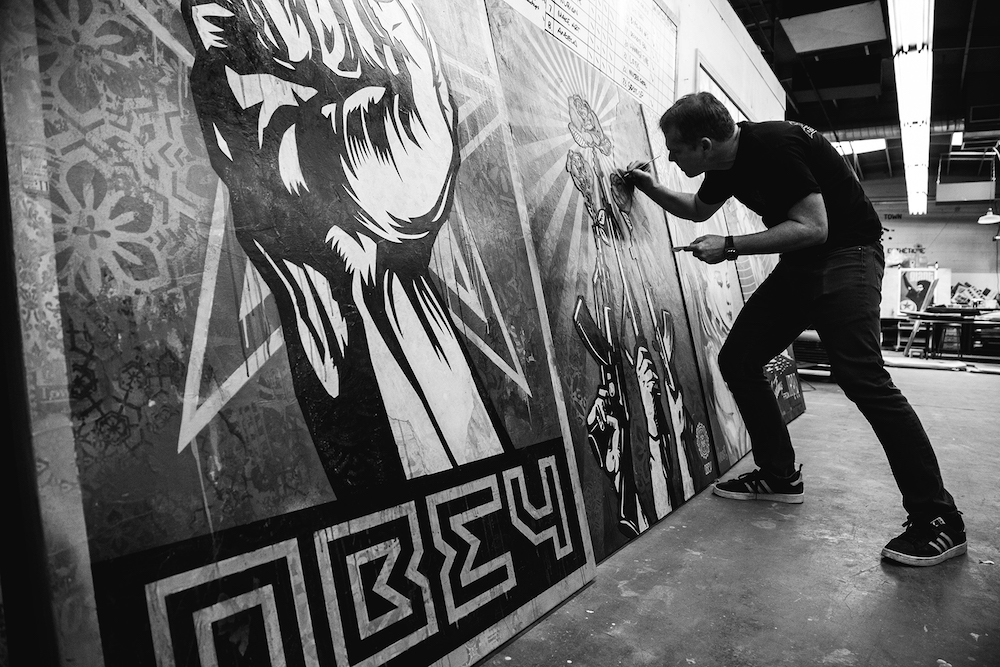 Fairey constantly moves forward, and during the journey gained wisdom while maintaining the defiant idealism that fueled his beginnings and continues to define his career. The artworks represented in Facing the Giant: 3 Decades of Dissent selected for their aesthetical and conceptual prominence, addressing recurring topics such as phenomenology, self-empowerment, rebellion, abuse of power, environmental destruction, racism, gender inequality, xenophobia, campaign finance reform, the military industrial complex, propaganda, war and peace, and economic imperialism. Fairey is always inspired to make art, as he creates compelling imagery to ignite conversations and provide unique avenues to address challenges.

Facing the Giant: 3 Decades of Dissent demonstrates the possibility if marrying art and social commentary in ways that are playful, agitational, humorous, seductive, graphically potent, and often even beautiful. 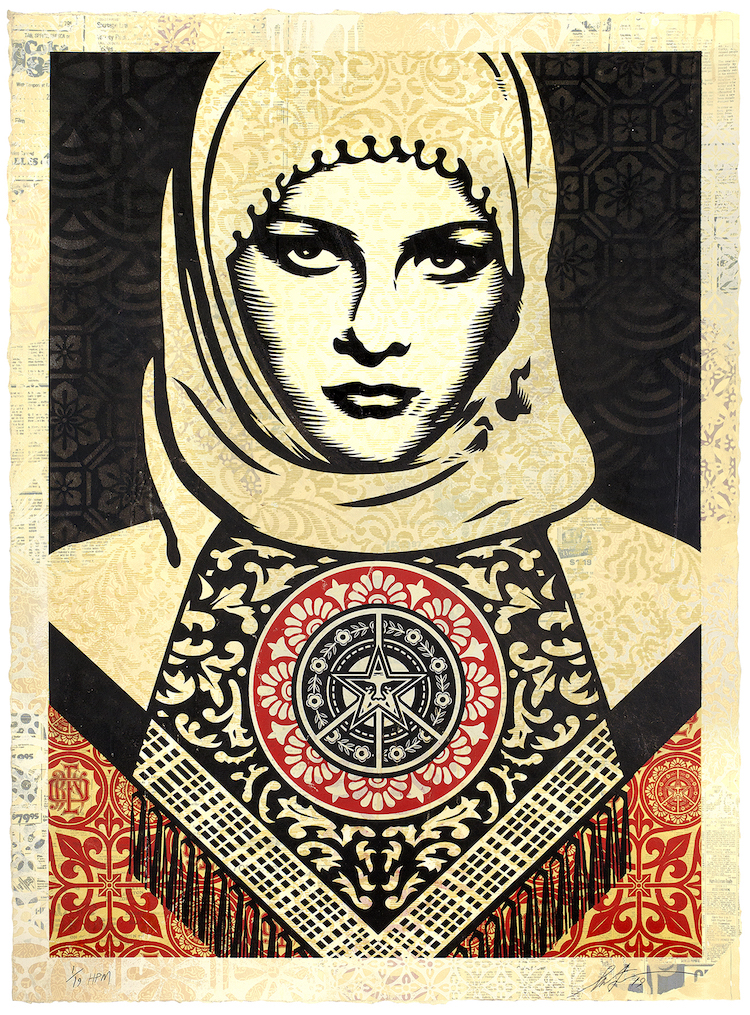 Fairey is debuting Facing the Giant at the Grenoble Street Art Festival with an exhibition opening June 5 and reception June 13, the series proceeds in the U.S. at Beyond the Streets NYC on June 21, then heading back to France for another edition with Galerie Itinerrance on June 22. Fairey heads to Vancouver this summer, followed by stops in Korea, London, and Providence later in the year.

The project Facing the Giant: 3 Decades of Dissent culminates with a fine art exhibition showcasing never-before-seen canvases of the select works on view November 9 at Over The Influence in Los Angeles, and ends during Miami Art Week with Goldman Global Arts. Throughout 2019 Shepard Fairey will be painting large-scale murals, with a career 100 at Providence, Rhode Island, where the Obey Giant art campaign began with the “Andre the Giant has a Posse” sticker in 1989. 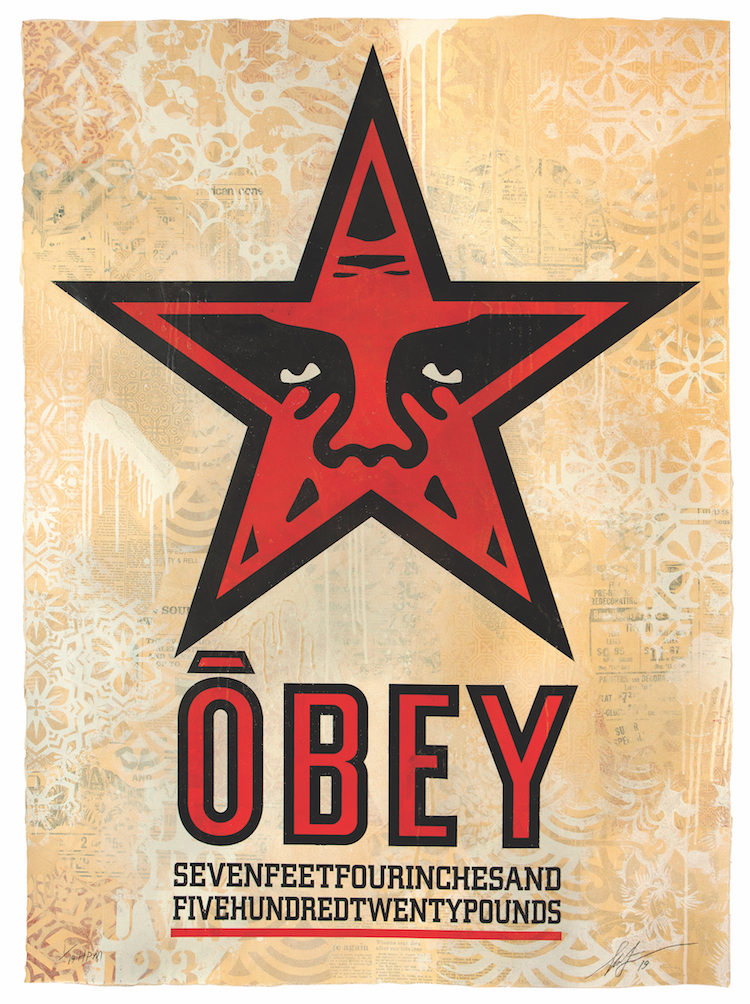 Shepard Fairey is known for a steady production of fine art screenprints that began his career, and he has continued to create provocative and accessible works with his 18 x 24-inch screen prints. For this survey of the last three decades, the selected 30 artworks will be shown for the first time as 30 x 41-inch fine art prints on cotton rag paper, and as 30 x 41-inch hand painted multiples (HPMs) which are prints on unique collaged backgrounds with additional stenciling and embellishments. Facing the Giant: 3 Decades of Dissent is the first time that many of these images can be obtained in mediums other than the original 18 x 24-inch screenprint editions that have long been unavailable on the primary market.