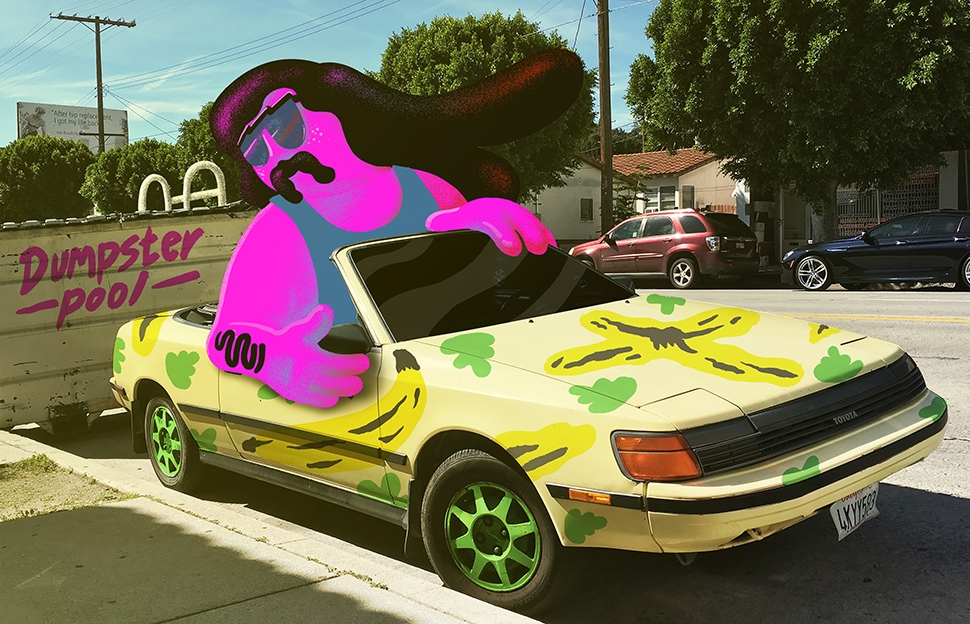 Emilio Santoyo is a Michaelangelo from the Inland Empire, virtually chiseling something out of nothing on the regular. Often getting the sense that something was missing from his everyday snapshots, he recently started breathing life into them, revealing the saucy characters who belong there. This new Faux Real series is only a tidbit of Emilio’s illustrative breadth. Major snack brands can be found in his lunchbox of clients, and his endeavors are a smorgasbord of animation, design, analog art, and hot dog pals. 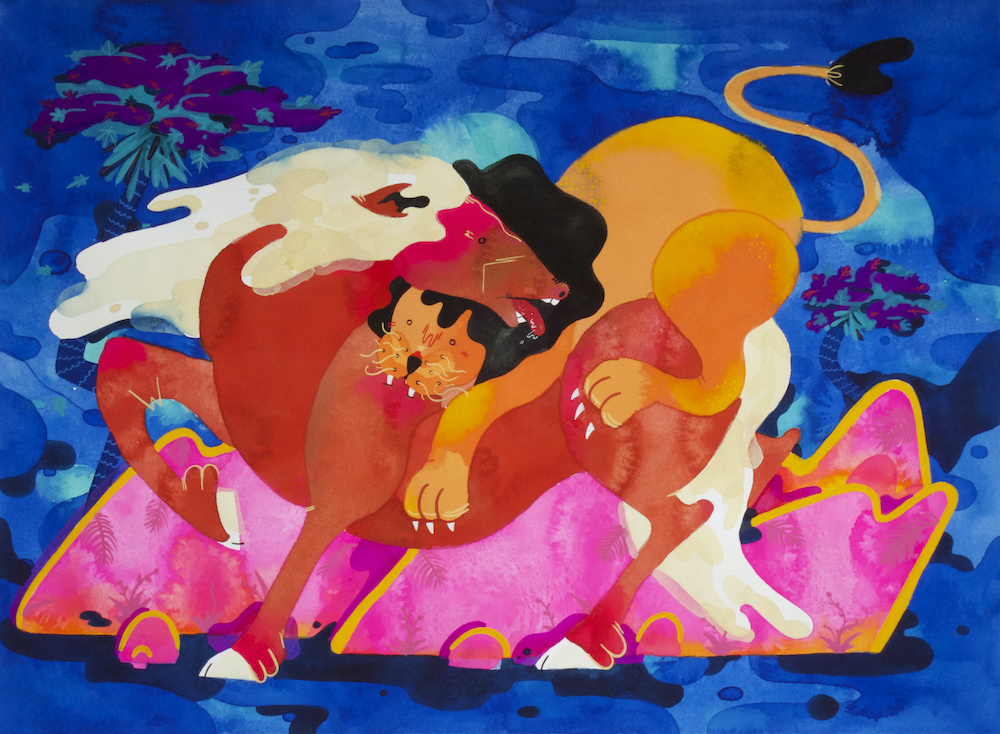 Kristin Farr: Where are you from and how did you get here?
Emilio Santoyo: Born in Mexico City, raised east of LA in California. I grew up with a good mix of ravers and hip hop heads, which meant we went to a lot of parties and shows. On our way to a show in LA, a friend wanted to check out an art school. He was my ride, so I said, “Sure, why not?” I learned that people were making a living doing what I was doing for fun. That school tour was the pivotal point, plus a few art shows, art school, a few parties, and a lot of misadventures with friends—now we here!

You make these weird IG albums that I live for. Give the people an example.
Oh, the carousel feature on Instagram. Love that thing. Having an iPhone, you are able to take a lot of very dumb photos, and those photos need homes. When I post something, I like to curate a nice scroll for everyone, like putting together a small photo zine. It’s not a photo dump because I think about it. Generally, they are related to the illustration post in one way or another.

So, one post is this super chill girl hanging out on the hood of a car on her phone. The phone has a Tweety Bird phone case, like all great phones do. Next is a detail shot, which, you know, cool, we need to see the tiny sunglasses even closer. Then you get to the last photo, a Flamin’ Hot Dorito being dipped into Taco Bell nacho cheese. Pause.... I thought the color palette of the Dorito and cheese matched well with the skin tone of the girl and Tweety Bird. They look good together and both are hot. Hot 95! 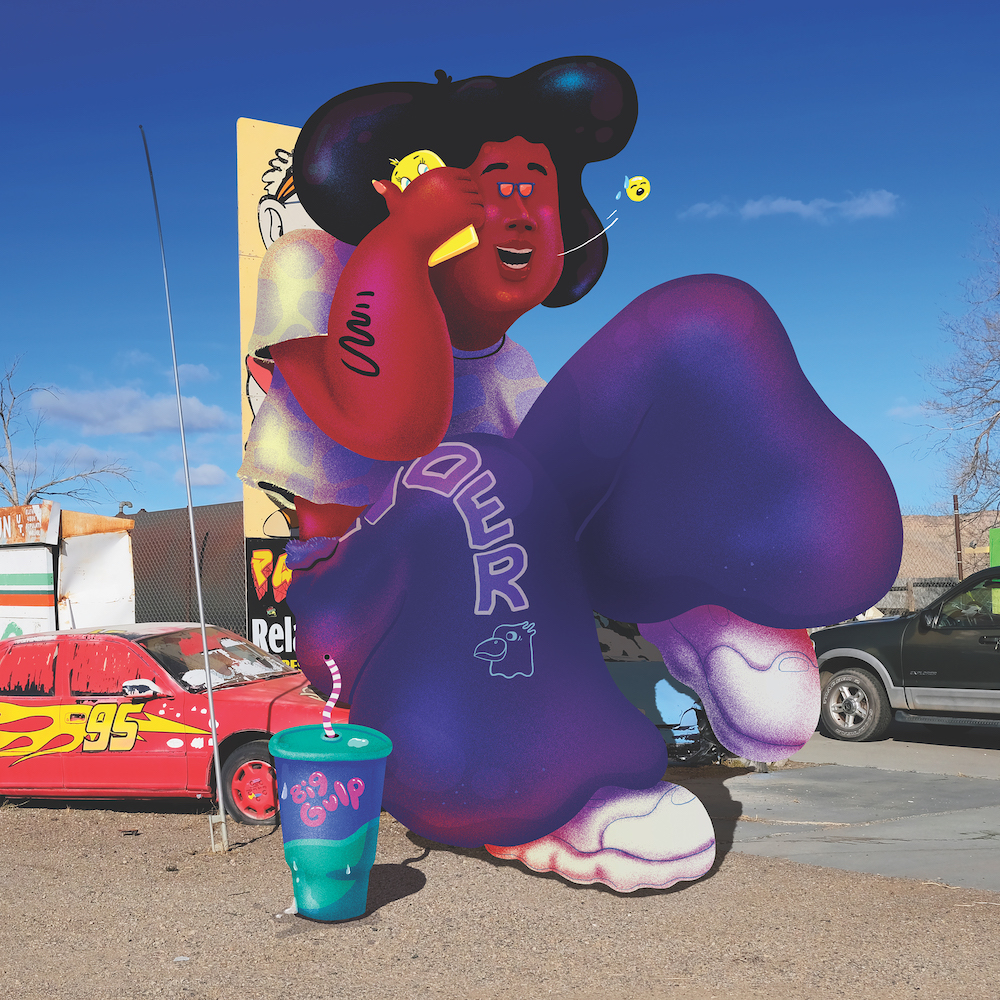 Tell me more about your relationship to food; it shows up often.
Food is always a good co-star for any photograph, illustration, or movie scene. Incorporating food into my work as the main subject, or chillin’ in the back, came from observing real-life photographs I would take. Food was always there, like a person photobombing all your vacation photos.

Food in art sets the mood of what’s happening… are they drinking champagne or just sipping a tall boy in the back of a pick-up? Food adds to the story and adds character to the people in the scene.

Usual foods that make appearances are hot dogs, bananas, and probably a Big Gulp here and there. Hot dogs are, in my opinion, the best-looking food out there. I think cartoons helped out with that. That well-placed mustard and ketchup on top, with the wiggly line and such… it’s very simple, minimal food. Hot Dogs are the Eames furniture of food.

You’re also connected to cycling designs. Do you love bikes?
Always loved a good bike ride growing up, but I think I went extra when art school started. I was drawing 100 heads in a week and I needed a different outlet, so I started going on more bike rides and meeting other people, who then became friends, who then started brands or had projects that I would help with.

I regularly help on a friend’s brand called TeamDream with graphics each season. They make awesome bike kits and other non-cyclist apparel in San Marino. It’s such a great community of people, and bike rides are so fun. 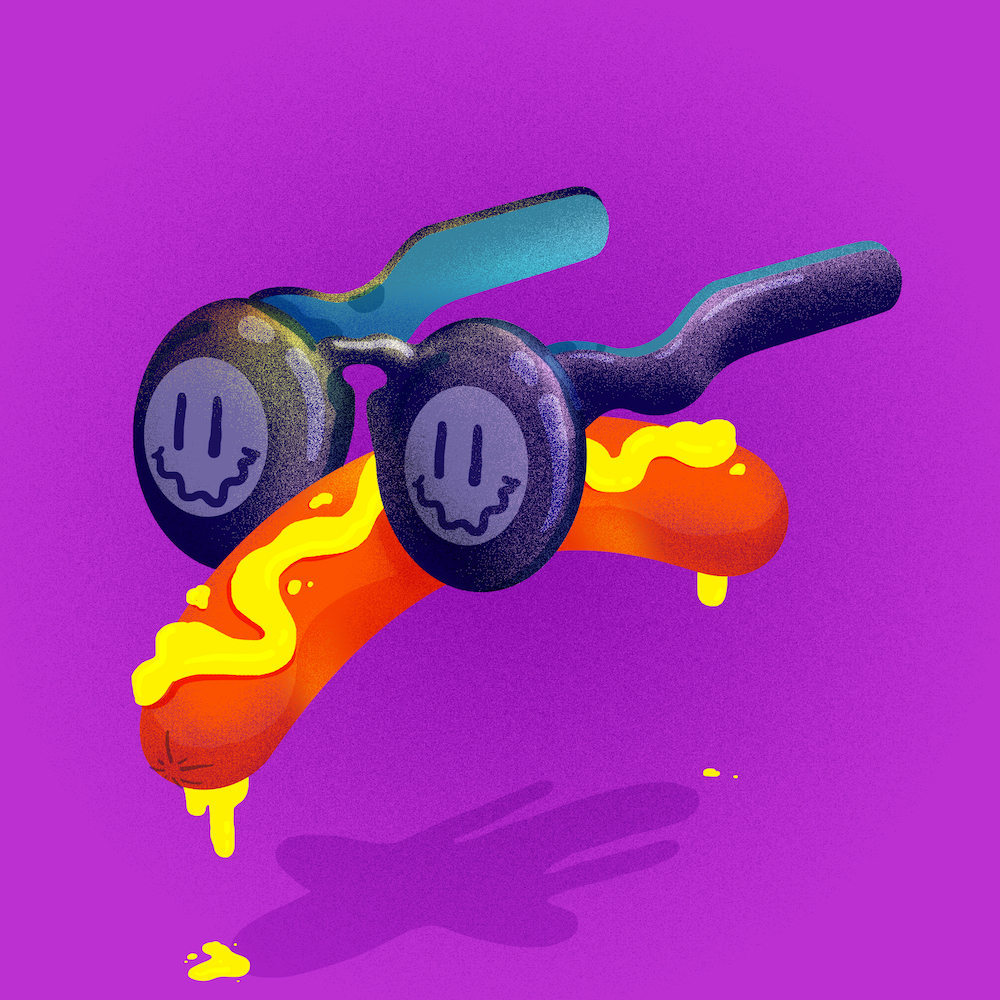 In terms of art supplies or digital tools, what are your first and most recent loves?
Art supply-wise, I found this pencil I enjoy using called a Fat Boy. It’s a very fat, red, graphite pencil. I love the wideness of it and the texture it leaves.

As far as digitals go, I have been trying to open After Effects more; adding subtle movement to things where I can. I also got some new brushes for Procreate that I am excited to use.

Could you see yourself having an art show unrelated to design?
I would love that. I have some plans to do more analog work. Since having a kid, I think I’m gonna try to chill on the monitor usage so he can see arms moving on paper and such. I think it’d be good for him and myself as well. It’s an added bonus if it leads to showing more of my work in a space. 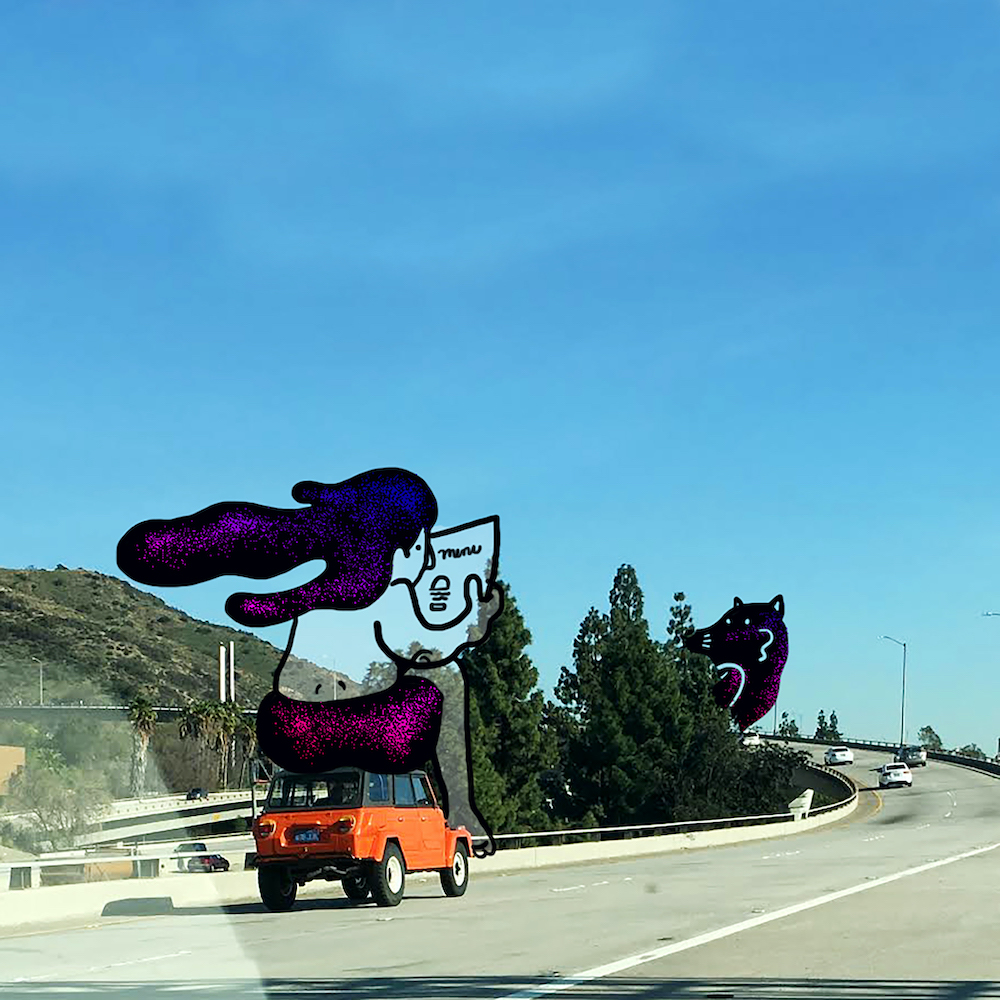 Tell me about your Faux Real series, animating on top of still images. They are very LA.
Super LA because, really, it’s just me walking around, driving by, or stopping because something is interesting. It’s a series that started with a big imagination. I find myself in places where I get a sense that something is missing—something lives here, and it’s on me to make this (mostly empty) space have life. I take the photo, and when I open it up on my laptop, life happens. It’s one of my more favorite series at the moment, because it also encourages me to go outside. Maybe I need to work with more images outside of LA. Let’s see where this series goes.

What’s the latest real-life street scene that got you?
The latest photo that is waiting for life is from when I was on a walk with Mori (the dog), and we came across this fully gutted car, no doors, no roof, fish tank in the back seat, but with 20” rims. I don’t know its story, but something will come of it. 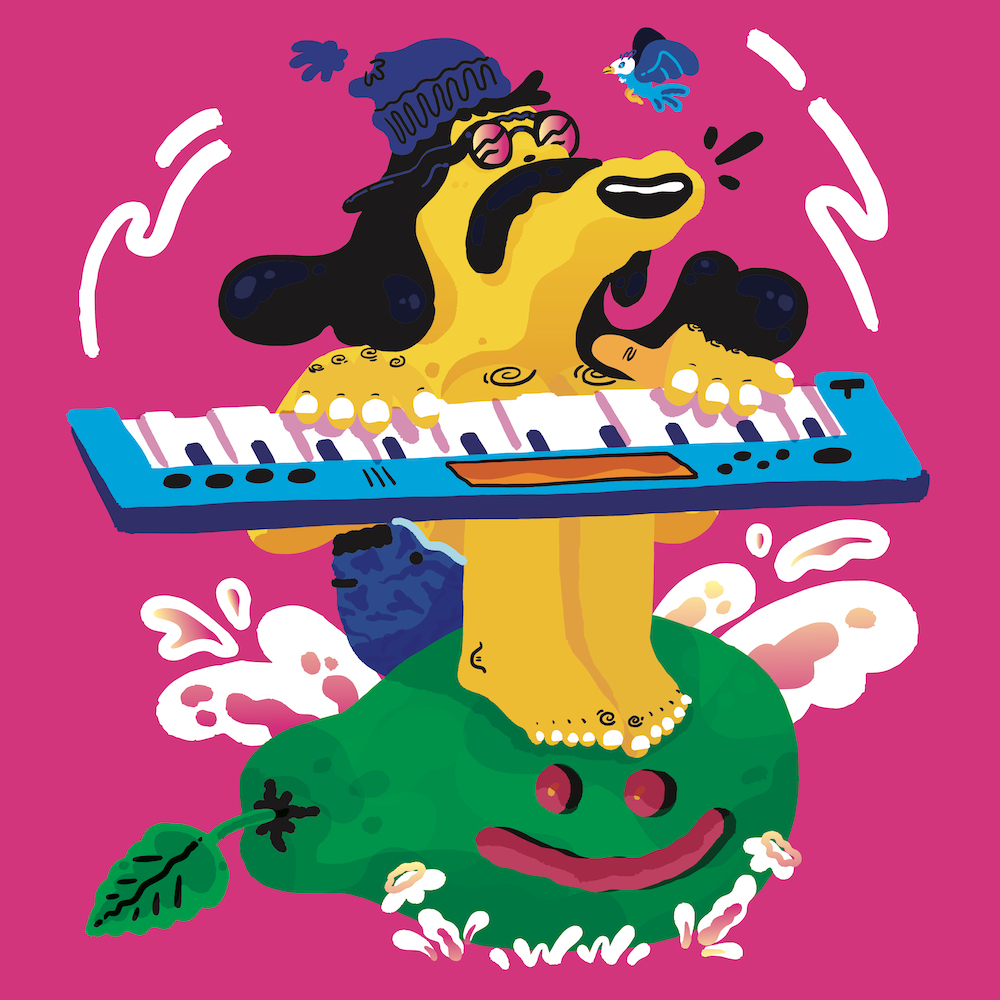 Tell me about your cool family and dog.
I love my little family of three. They are my life and keep me going every day with their good morning smiles. From that point on, my family grows with those who live in the Inland Empire—that’s my Mom, Dad and three other siblings. Family keeps growing even more with friends who I love like they were family, from as early as high school. Family is important and they provide all the dogs I need in life.

I actually do not have my own dogs. People around me have dogs, and I play with them, I watch ’em, and I live through them. The dog you are thinking about is probably the Shiba Inu named Mori. He comes around a lot more than others. He is my sister-in-law Ami's dog. She travels a lot for work, so sometimes I watch him, and we hang out all day. He is the most interesting dog I have in my life. 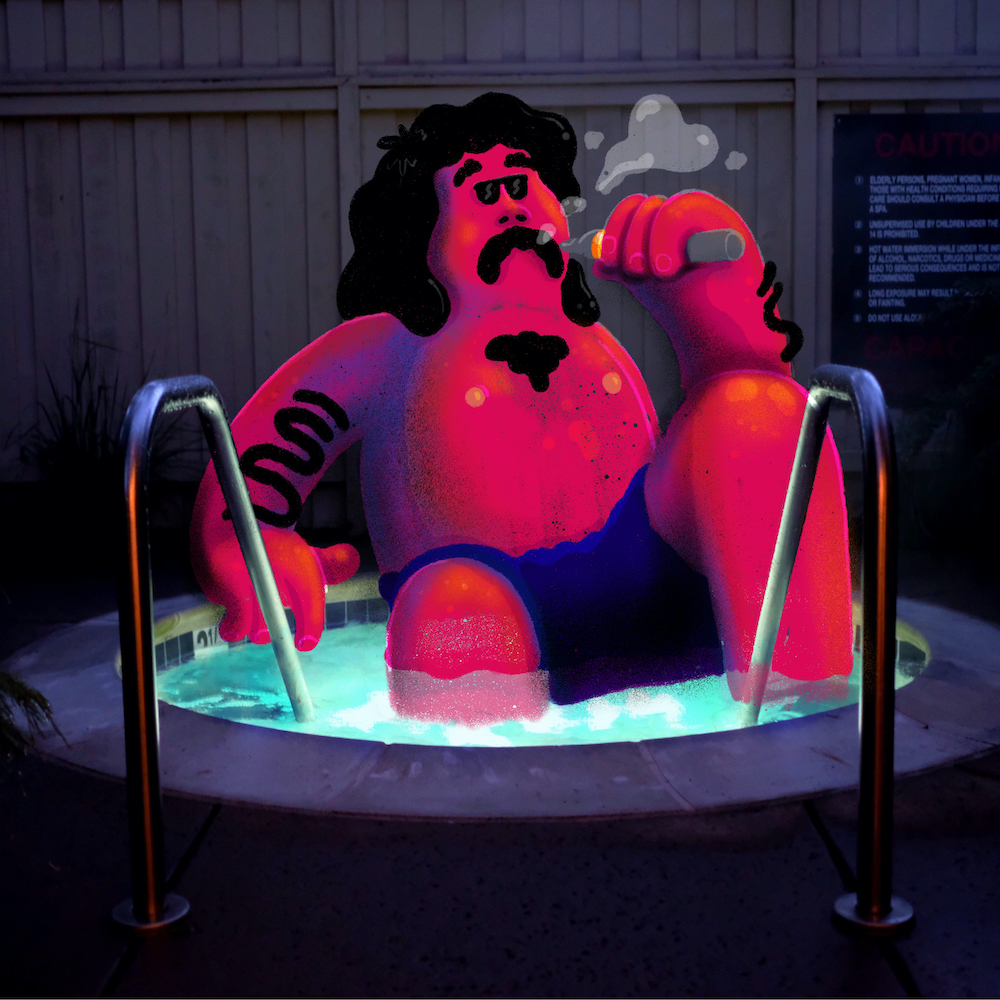 It seems like you moved away from linework to a more luscious, blobby style over the years.
The heavy linework never left, it’s just a different item on the menu that is being outdone by the colorful, liquidy, airbrushed items. I did an Apple project recently that was linework-heavy, but most recently, people have been really wanting the blobby airbrush look. That look came from trying to achieve the Cholo BIC-pen look digitally. It has evolved over time real quick and is still changing. Right now, I like mixing the balance of flat line work with the 3D look.

If your work had a scent and a soundtrack, what would they be?
Scent-wise, it would smell like the laundry room in a majority Latin apartment building—a lot of fabric softener and fresh. Soundtrack-wise, maybe Beastie Boys’ Paul’s Boutique album, which isn’t very LA of me to say, but I think, vibe-wise, makes sense….. Egg man driving around, king of the town, always got my windows rolled down. You know. 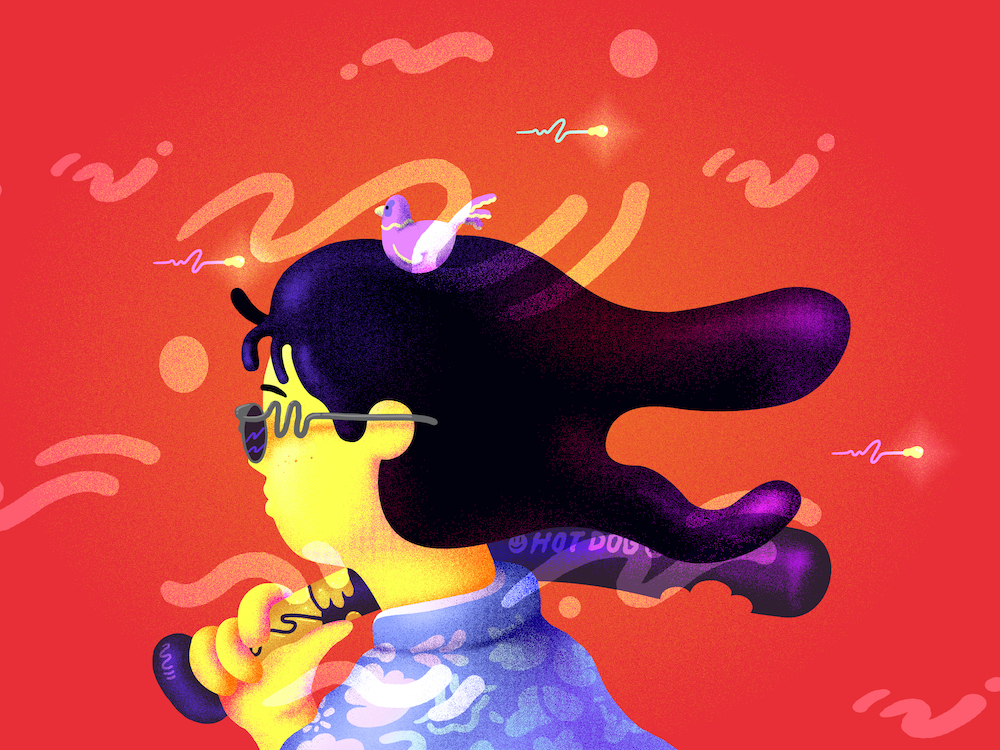 Like these mustache men you draw… Are they an alter-ego?
I’d love to say these people are based off an old folk tale or something, but really, this group of mustache folk just showed up one day. They are illustrated versions of the voice I use when I am telling a story of me interacting with a stranger out in the world. My story voice usually sounds like a surfer-stoner-Cholo guy, no matter who I interacted with. It doesn’t matter if it was an old lady, somehow my voice goes there. That’s the mustache people; they aren’t alter-egos, but more like background characters in my life story.

Weird. I use that same voice for all men and strangers. Is that the universal stranger voice?

Maybe it’s like accents. If you are from California, this is your stranger voice. Which now makes me super curious about how people on the East Coast tell stranger stories, or even in the South. What do people in Florida sound like when they tell stories about Florida men?

More twang? Ok, last question: which band’s album cover would you love to design?
For street cred and love, holler at my man MadLib on whatever project he has going on. For that “Look, Mom, that’s my album that Jimmy Fallon is holding on TV” feeling—Justin Timberlake. Hit me up, JT!