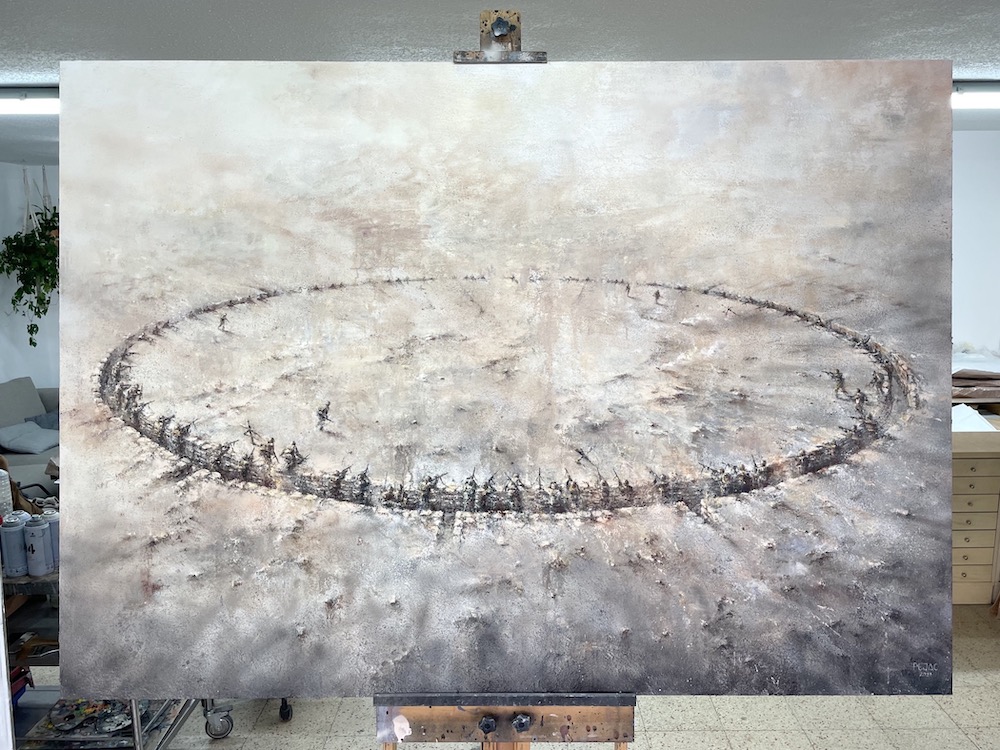 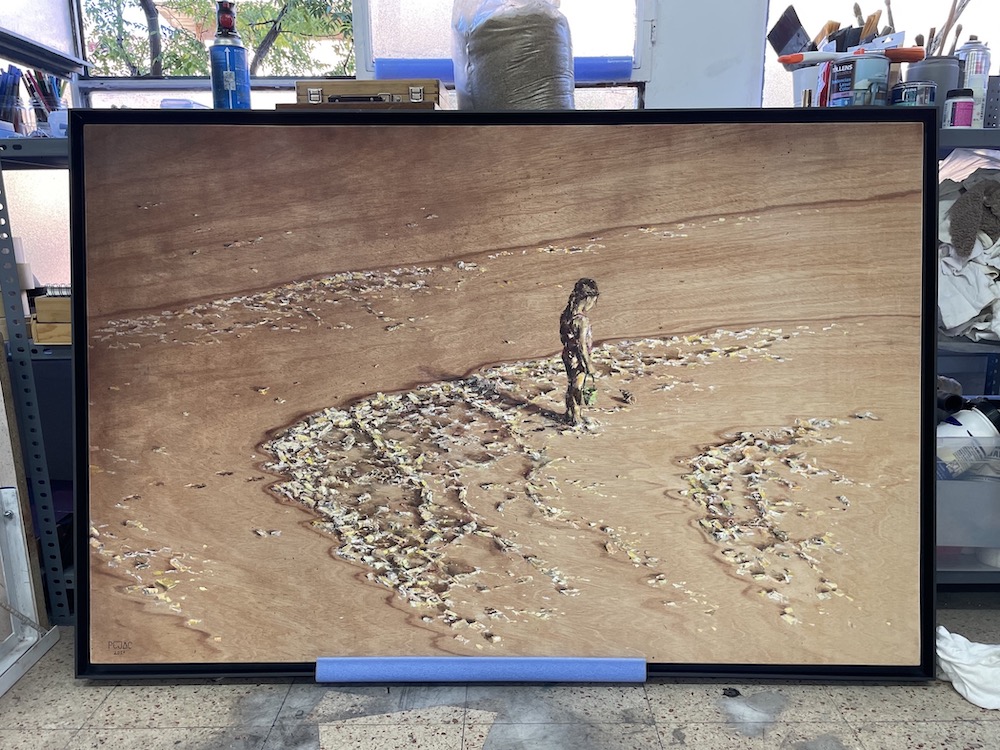 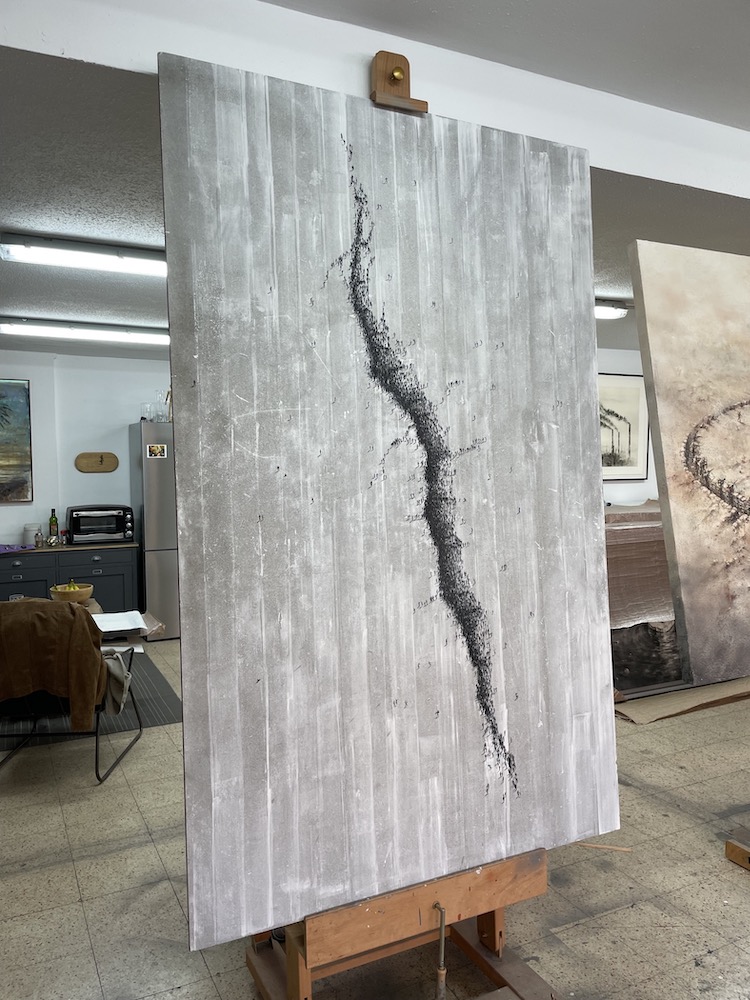 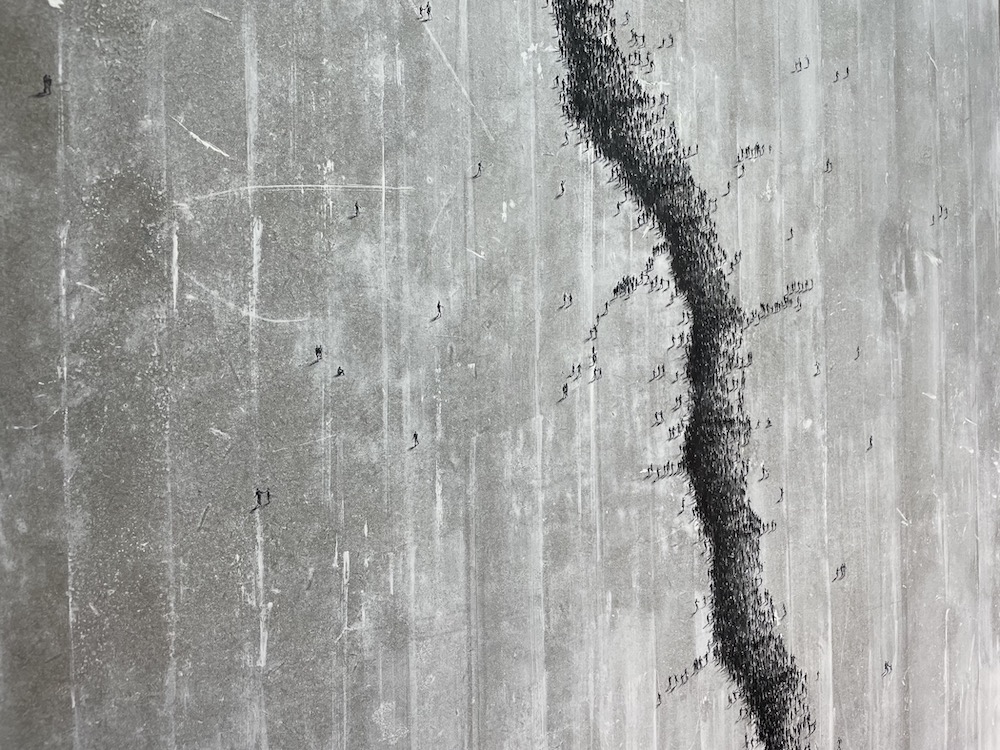 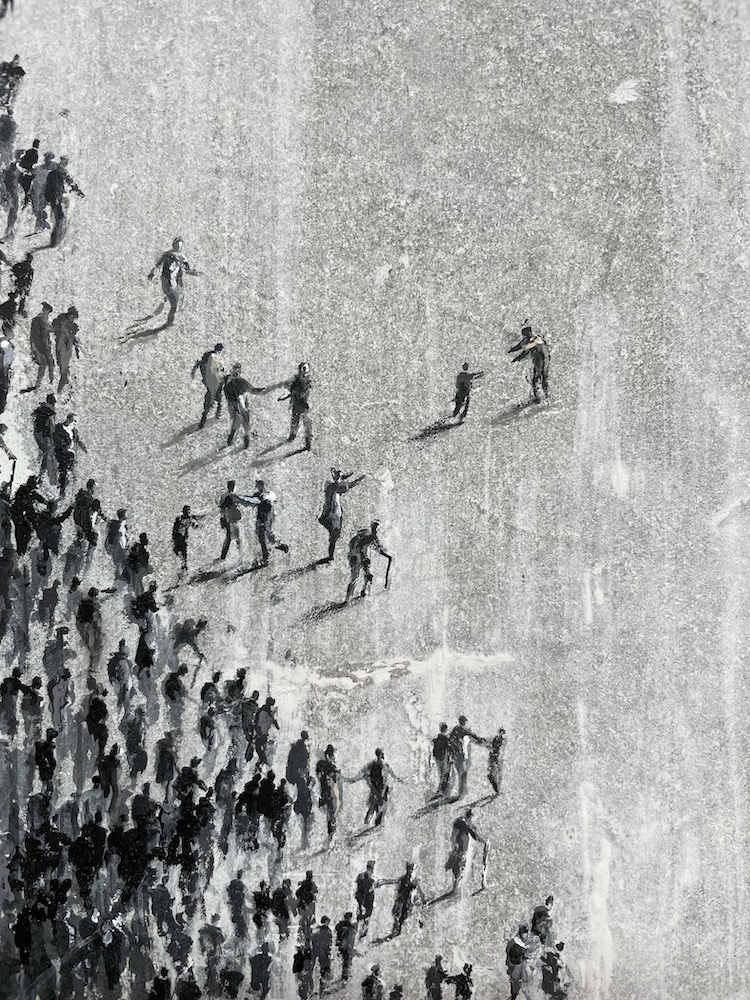 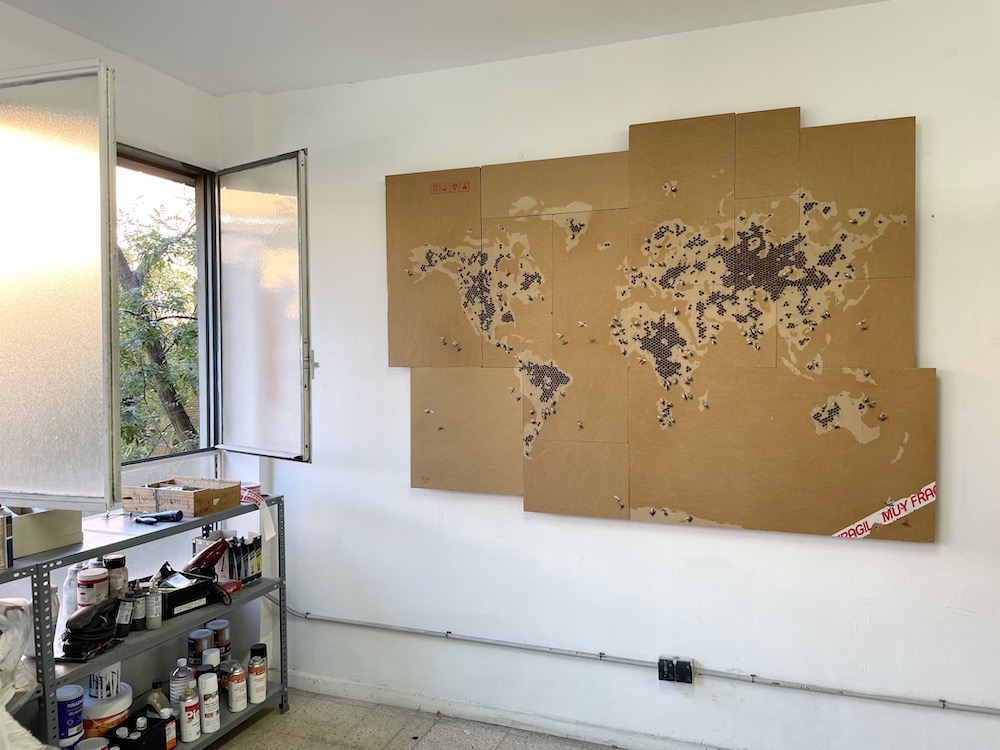 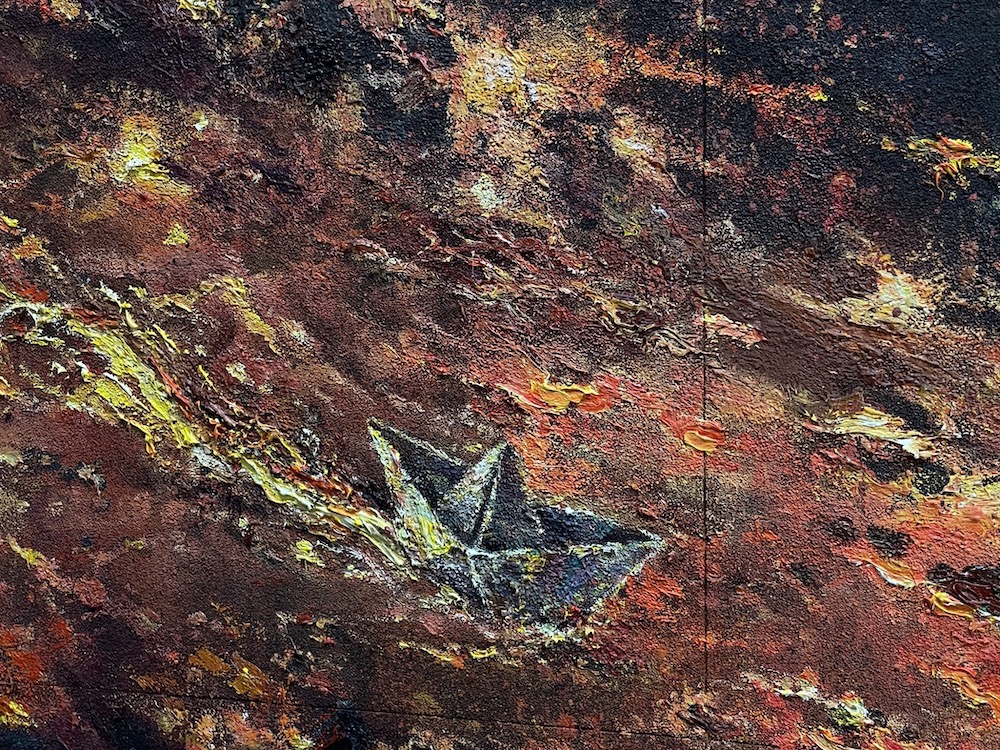 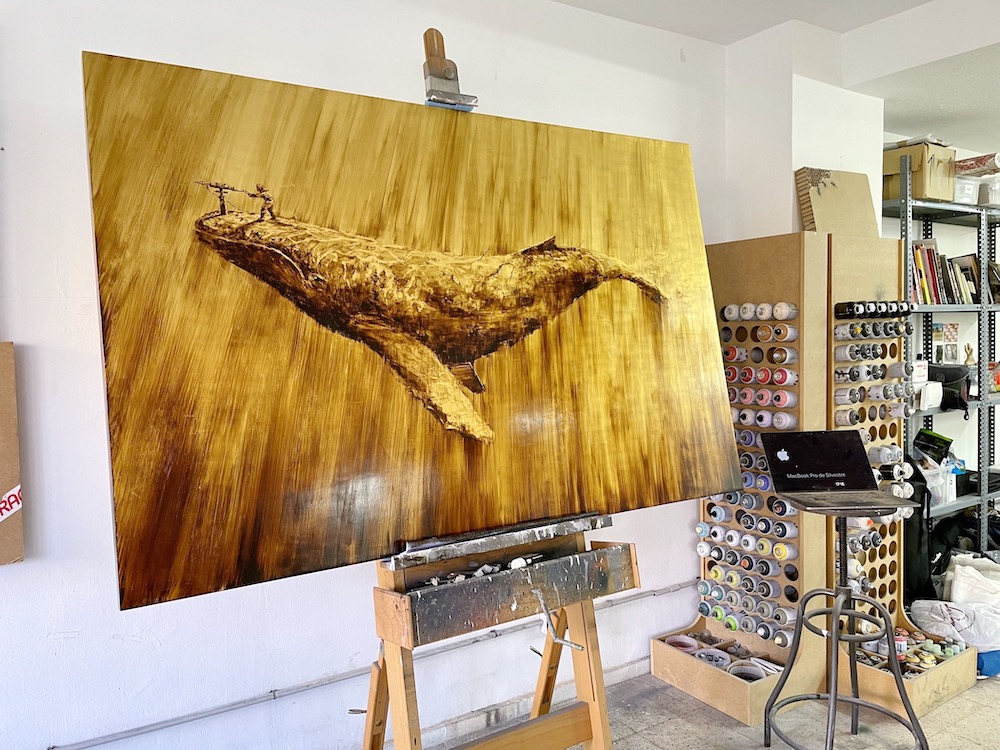 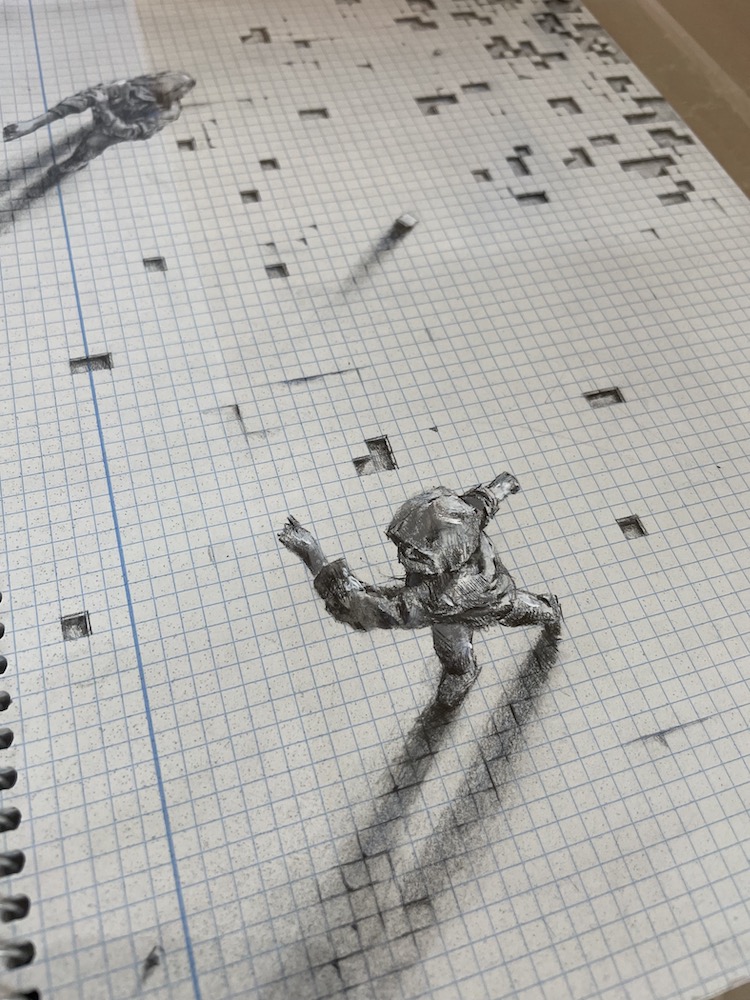 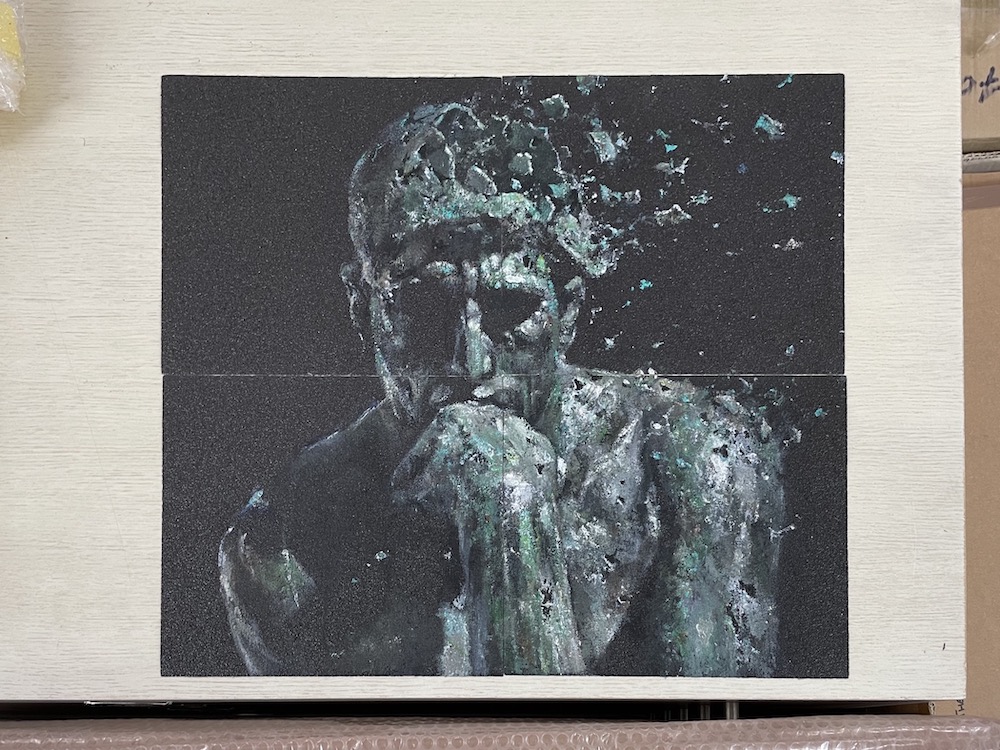 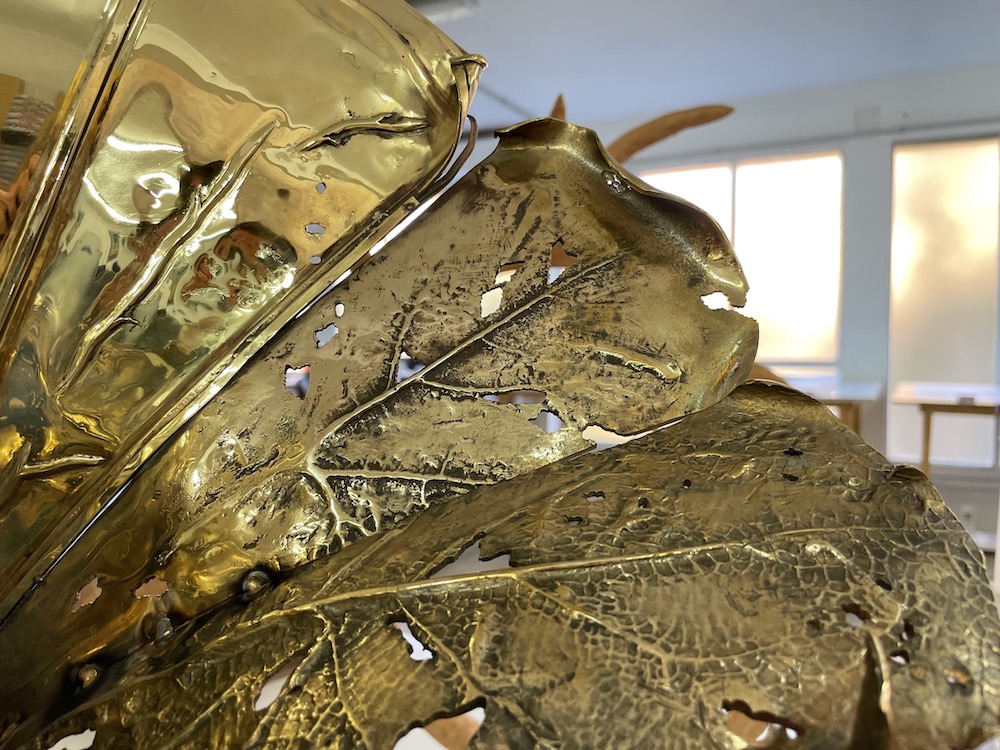 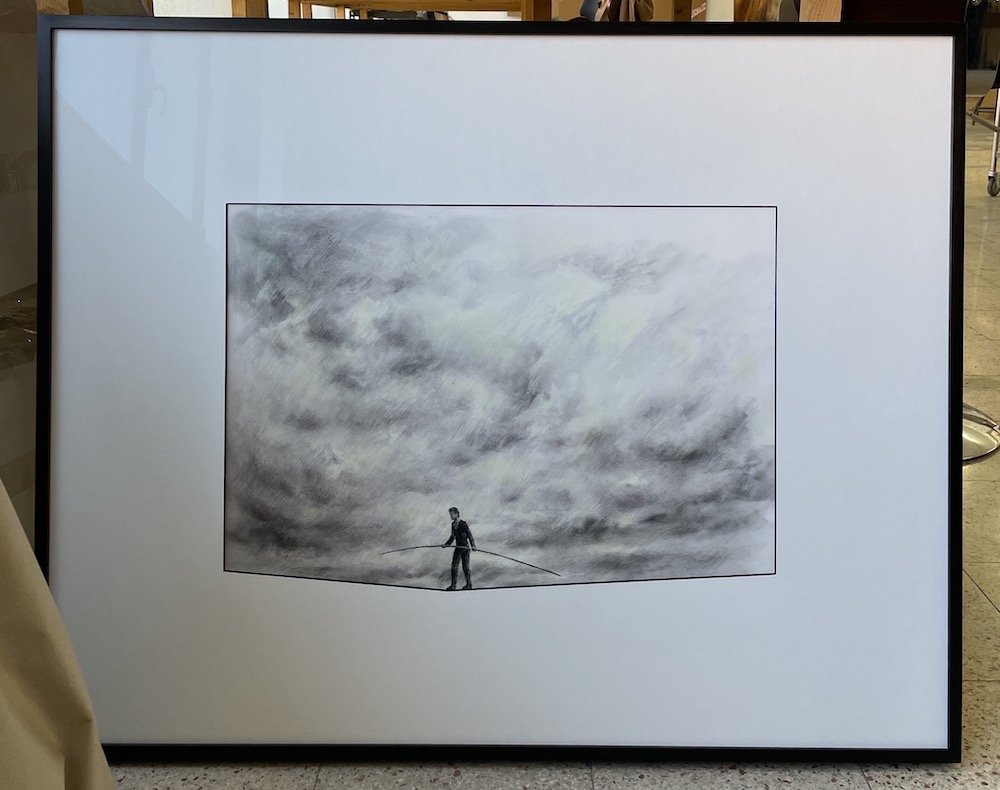 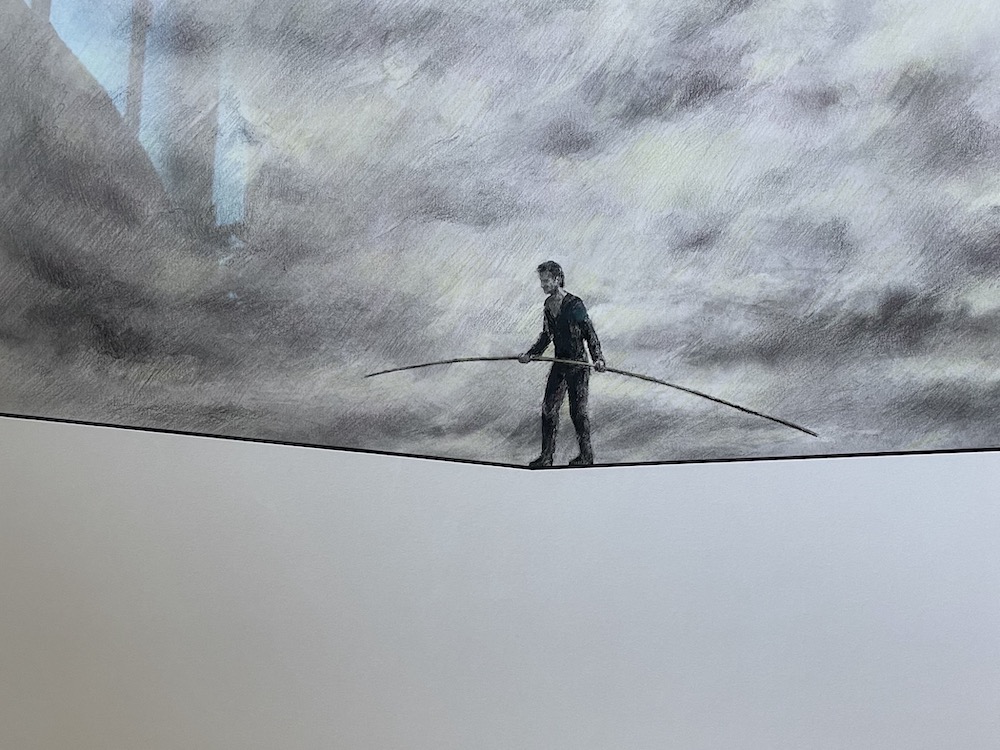 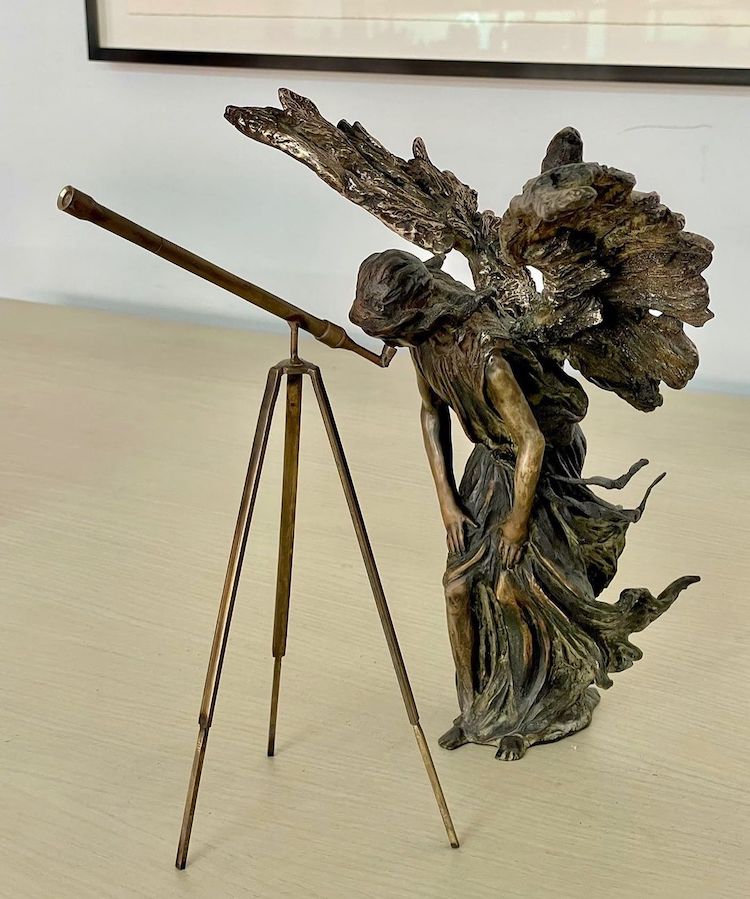 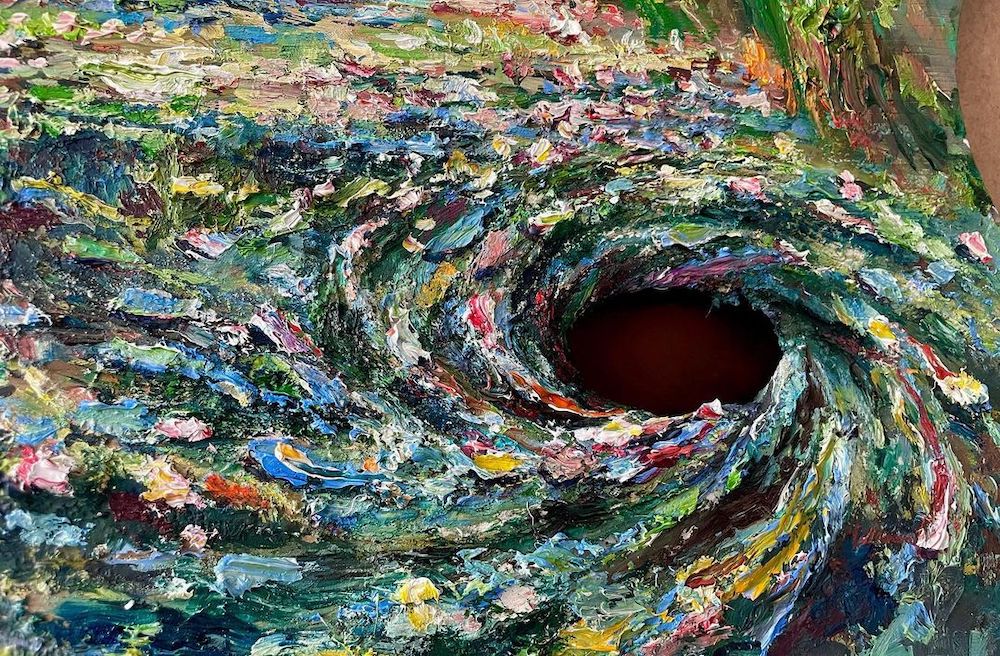 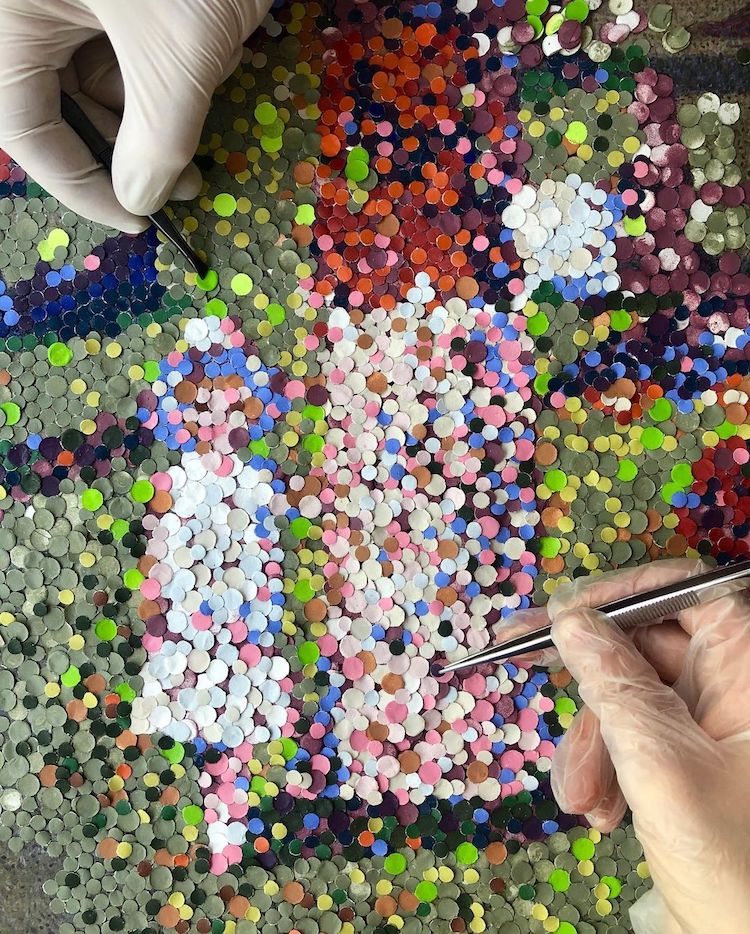 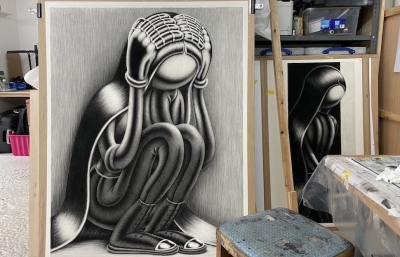 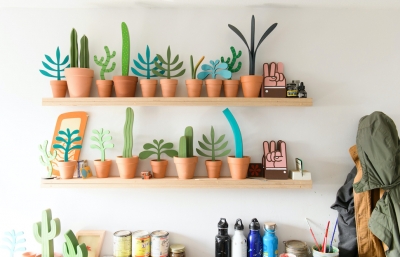 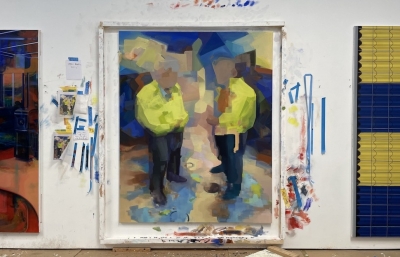 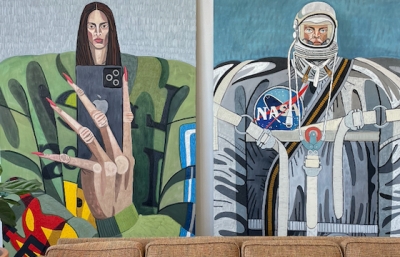 A couple of weeks ago we got an opportunity to visit the studio of our long-time friend Pejac, just as he was adding final touches to a large body of work he prepared for the newest solo show APNEA. Set to open at a former train manufacturing facility in the eastern part of Berlin for one week only between 30th October to 7th November, this self-produced exhibition is set to be one of his biggest and most encompassing ones to date.

There are virtually no elements of Pejac's trajectory that would suggest putting him in existing boxes or categories as we discussed with the artists in our 2018 feature. Yes, he is known for his street interventions but it often feels like those are just an expansion of his broad and all-encompassing studio practice. Yes, he is a traditionally trained artist, but seeing him using traditional tools and materials happens rarely and only if there is strong conceptual reasoning behind it. Yes, his biggest love is painting, but some of his most impactful works completed over the years included sculpture, installation, video work, interventions, etc. After introducing his studio practice back in 2016 with a pop-up exhibition in London, smaller presentations in a traditional gondola workshop in Venice in 2017, and on a waterway barge on the Seine in Paris in 2018, Pejac is about to reveal his arguably most elaborate exhibition to date in the German capital.

Upon entering his spacious studio in Madrid, we were instantly captured by the large-scale paintings that were ready for packing and pickup. A seemingly compact body of work is in reality done with a variety of techniques and tools, revealing Pejac's refined focus on working with the most peculiar materials to pass on the most impactful messages. From mixing sand and paint for a scene depicting the nonsense of war, working with the wood grain as a compositional guideline for the image about pollution, painting on sandpaper to accent human's weakness in comparison to nature's strength, to ripping and puzzling cardboards to create a fragile trompe l'oeil map of the world, these pieces are just a fraction of what the artist had prepared for his first show in almost 3 years. ‘‘Most of the works were conceived while the world was holding its breath. APNEA for me means breathing again’’, Pejac stated in the press release for the show,  referencing both the pandemic and the title of his show. ‘‘During a time of lockdown, painting within the four walls of my studio felt like a liberation and a lifeline. APNEA represents this contradiction.’’

Among over 40 works that will be on view, Pejac will present a large series of works on paper, sculptures made from a variety of materials, and even some functional objects such as the surrealistic, withering vintage record player. Introducing some of his old concepts in a new format and/or a new medium, this exhibition is fully conveying the experimental nature of his practice. Backed by the deep and honest love for the classical art tradition as well as exceptional examples of humanity, the body of work features countless nods to some of the artist's personal idols, from Claude Monet to Philippe Petit. Mixing technical ingenuity with surrealism, frequently pushing the possibilities of trompe l'oeil to new heights, and successfully translating his illusionistic concepts into sculptural form, APNEA is set to be a feast for the eyes, mind, and soul. —Sasha Bogojev