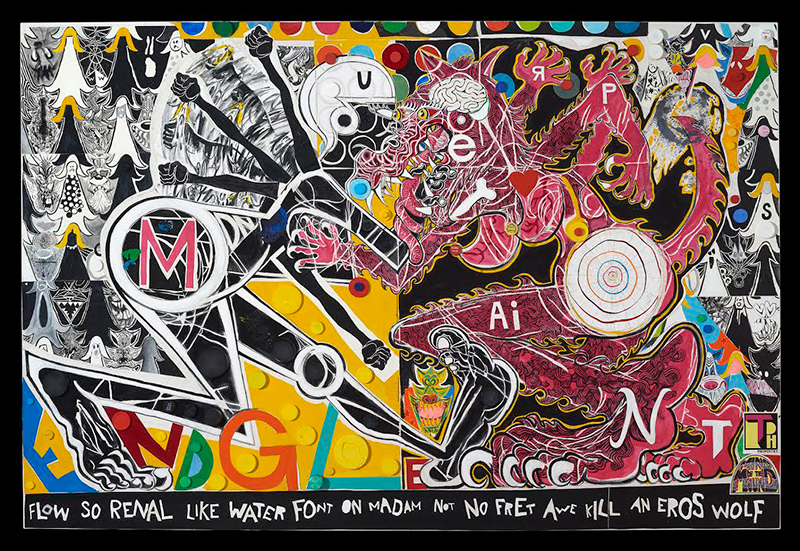 Featured in Juxtapoz x Superflat: "The She Wolf Amongst Them was Undom's Conundrum", acrylic and mixed media on canvas, 6ft x 9ft, 2016
We think you'll like

Vegans vs Mounds! We are excited to announce that January 2016 cover artist and Texas-based artist, Trenton Doyle Hancock, is part of "Juxtapoz x Superflat." The show takes place from August 4—7, 2016, at Pivot Art & Culture in Seattle, and we have a 9-foot wide Trenton piece entitled,"The She Wolf Amongst Them was Undom's Conundrum" in the show.

In that January cover story, Gabe Scott asked Trenton about the development of the characters in his work, most notably the Mounds.

"Before it developed any kind of personality, form came first. The Mound form came to me when I was an undergrad, investigating how to paint the figure. I was trying to determine what my place was with figure drawing or figure painting. Coming from a comic book background, I had a certain understanding of how to approach character development and the proper ways to depict a figure, but I had to vary my approach to mark-making in order to make the paintings I wanted to make. As I painted more, I relearned a lot of things about how to use materials, and about the history of painting. I was also doing a lot of psychological archeology on myself.

"In the spirit of reduction, I began erasing or tearing off the arms and legs of my figures. What I was left with were bowling pins, and I felt a deep empathy for these seemingly helpless forms. As I examined issues of race, identity and inclusion, I began to add these signifiers (namely the black-and-white stripes) to my figures and the painted environments that they inhabited. The Mounds started as bowling-pin prisoners wearing striped outfits and evolved into fantastical forest-dwelling creatures. The Mound was the result of my search for a simple yet complex form, a receptacle for universal ideas. For a while, I was creating characters that acted as loners. It only seemed right to have them all interact with one another at some point. In this way, the mythology grew organically."