If we told you that the Patriarch, the Outlaw, the Maverick was settin’ foot in Fort Wayne, Indiana, would you be thinking Jeff Bridges... Sam Elliott? Nah, it’s Robert Williams and his SLANG Aesthetics with a body of new work, as prismatic and provoking as his incisive text. Check it out, as explained in his own words.

If we told you that the Patriarch, the Outlaw, the Maverick was settin’ foot in Fort Wayne, Indiana, would you be thinking Jeff Bridges... Sam Elliott? Nah, it’s Robert Williams and his SLANG Aesthetics with a body of new work, as prismatic and provoking as his incisive text. Check it out, as explained in his own words. 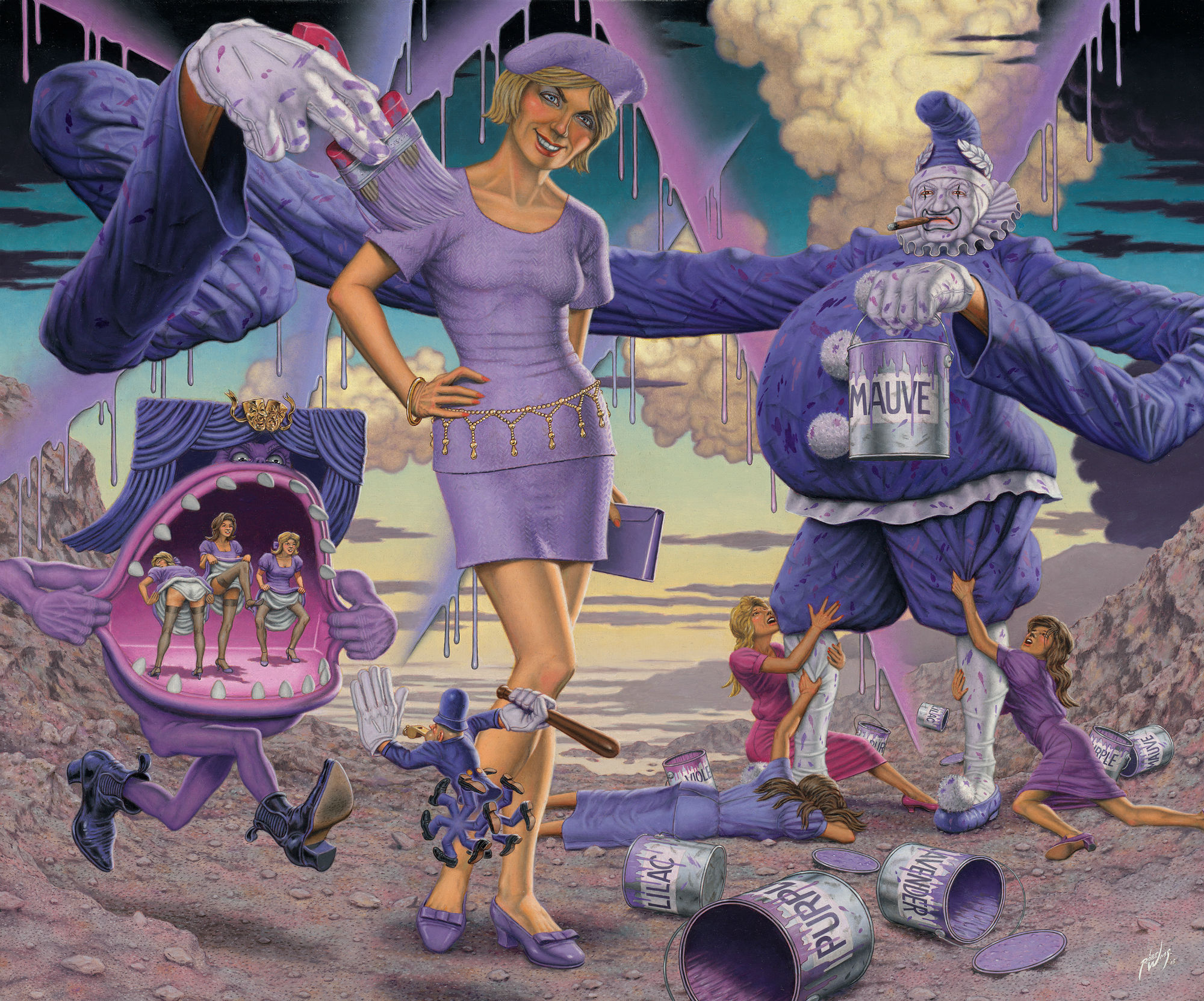 Purple as an Inexplicable Poetic Force
Robert Williams: It is not my intention to take every color in the color wheel and extol metaphysical significance to each hue. Nor is it justifiable to invoke the laws of physics with regards to scientific observations of the prismatic spectrum. However, colors do have personalities. Ultraviolet does solicit emotion, while red creates agitation, green offers pastoral repose, blue suggests lonely reflection and yellow evokes surprise. Violet, on the other hand, goes a couple emotions further. Like metaphorically rubbing sugar in one’s eyes, purple can be nauseatingly sappy. On the other hand, mauves and violets used in moderation with contrasting color, can be powerful and dramatic.

As a test of memory for the artist, I have brought back a persisting visual obsession I’ve pondered for 45 years—the images of a sultry young girl I chanced across the summer of 1970. Not as a sexual fixation, but as a point of Freudian reference for the color mauve, now a wispy ghost faintly imprinted on the walls of my libido, just like a long-ago smudged fingerprint on a brothel bedpost. Once, just a gossamer specter dressed in lavender, not either a doting grandmother or simply deceased. 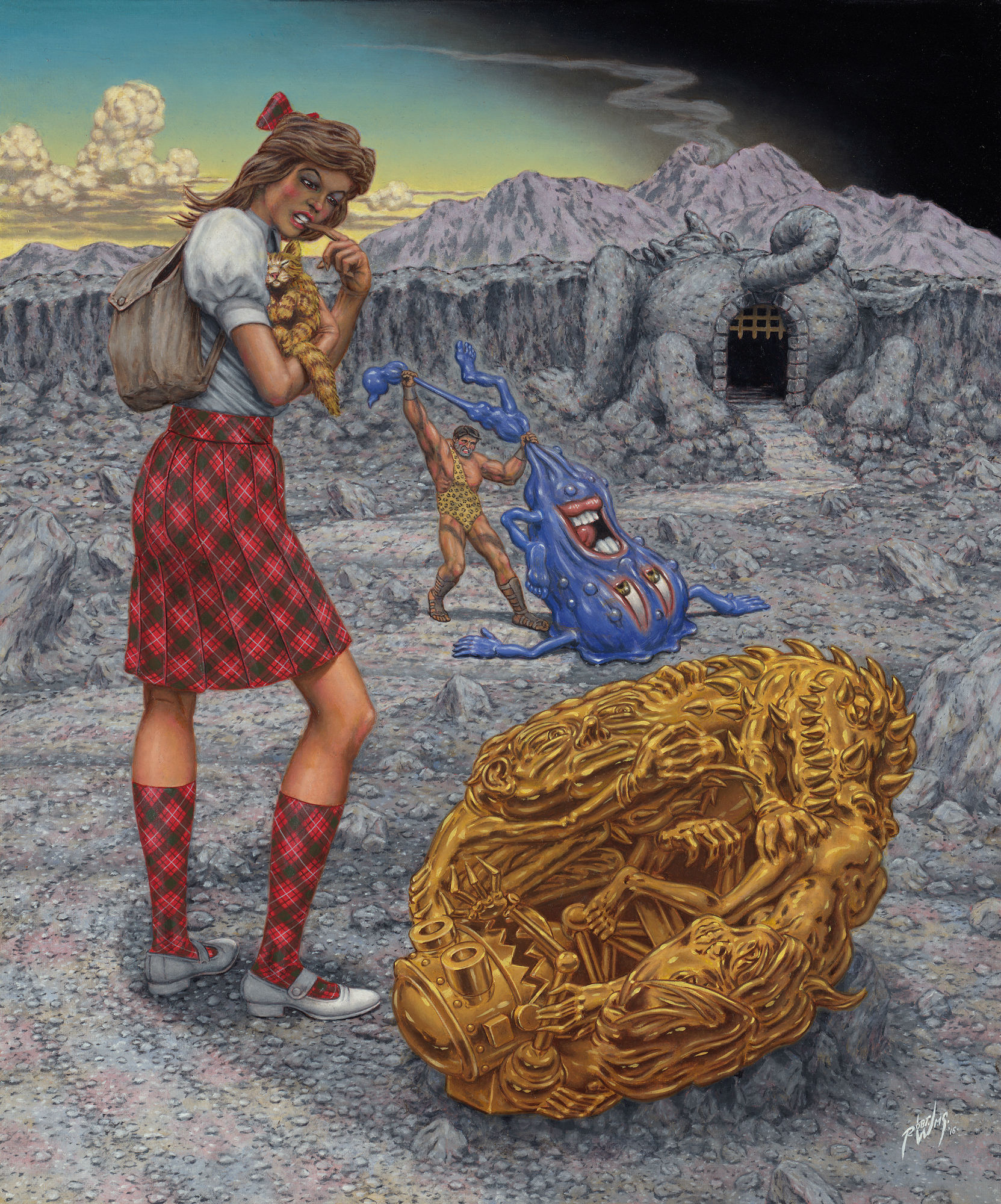 Brenda and Fluffy's FIrst Caveat on the Road to Damnation
If this painting was a parable, we would be witnessing a soon-to-occur young girl’s encounter with the devil and his tested abilities to corrupt the incorruptible. Or, if it was a symbolic metaphor, this would represent the turning point in everyone’s life when one sees dangerous signs that suggest reversing one’s course. But, unfortunately, there is a more fundamental intention to this picture. As with many of these paintings, for the art observer, the innocent participant, in this case, the school girl, is the vicarious entrée point to the work. Consequently, any aberrations or anomalies detected would place the moral realization at the hands of the onlooker. All inequities aside, the artists declares his action in creating this work as indeterminately uncritiqueable and wishes the observer to respect his lyrical subjectivity (artistic license).

His poetic responsibility is in how long he can deepen the art patron investigatively engaged. Accepting further culpability for this work would be asking for more than this painting narratively offers. 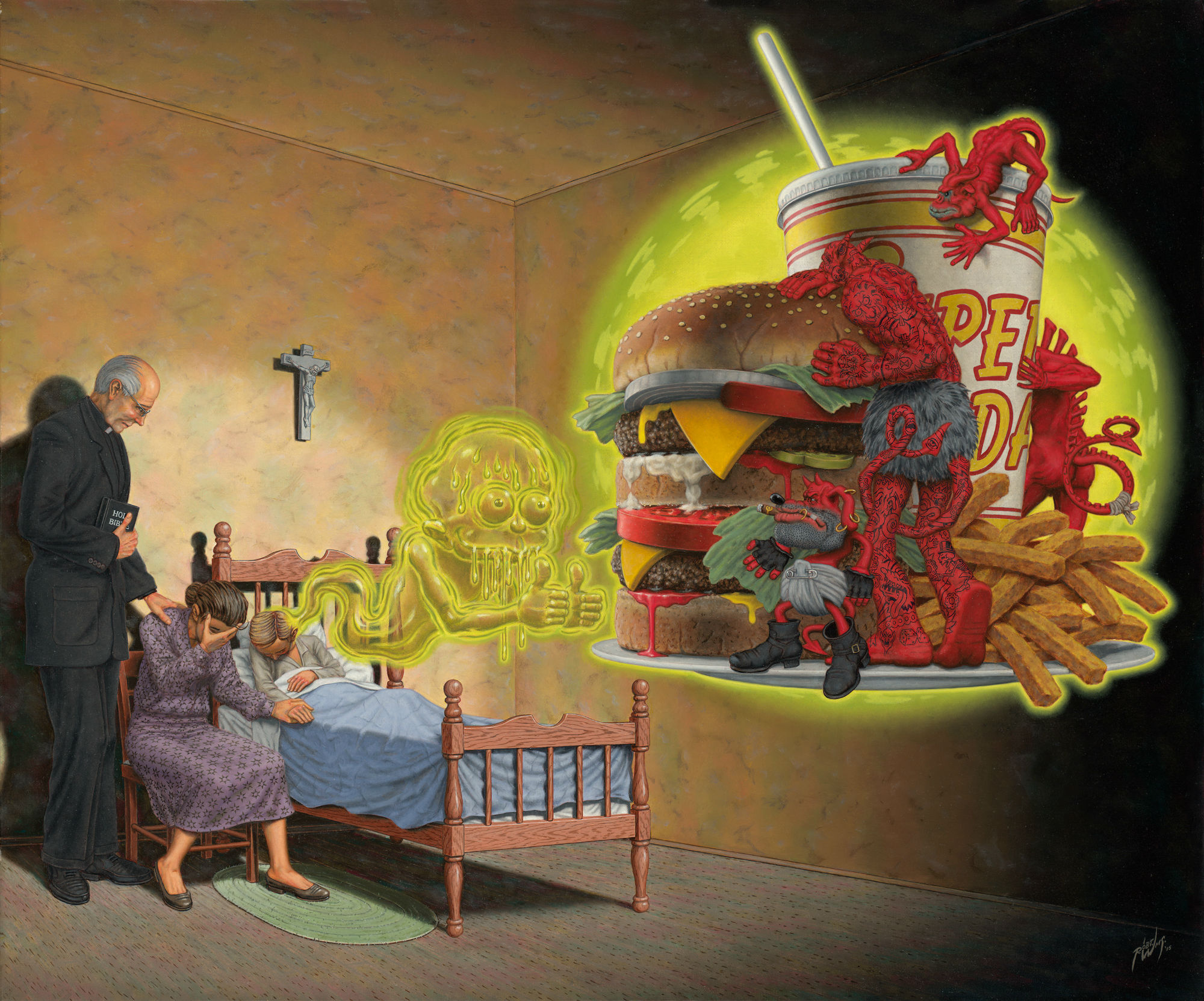 Fast Food Purgatory
The painting reveals a child’s liberated spirit gravitating to his most desired passions in life—double cheese half-pounder with spicy fries and super soda. In ghostly form, the young fellow hangs in middle ground between damnation and hereafter—waiting for judgment of the worthiness of his soul. The levitating apparition of the burger combo hides insidious instigators, a pack of demonic profligates, satanic cretins laying in wait to sway the innocent child’s weaknesses.

Implications here are far more extenuated. Obviously, fast food is not itself antisocial, and his age would indicate the deceased could not have spent a lifetime eating greasy foods long enough to kill him. Seen from an ecumenical level, the connotation that burgers and fries are not permitted through the portals of kingdom-come makes heaven rather uninviting. This oil painting’s excessive melodrama creates a false pathos. Graphically, the strong, simple emblematic composition of this work gives credence to the notion that even an anemic poodle barking at the moon can sometimes be mistaken for a baying wolf.