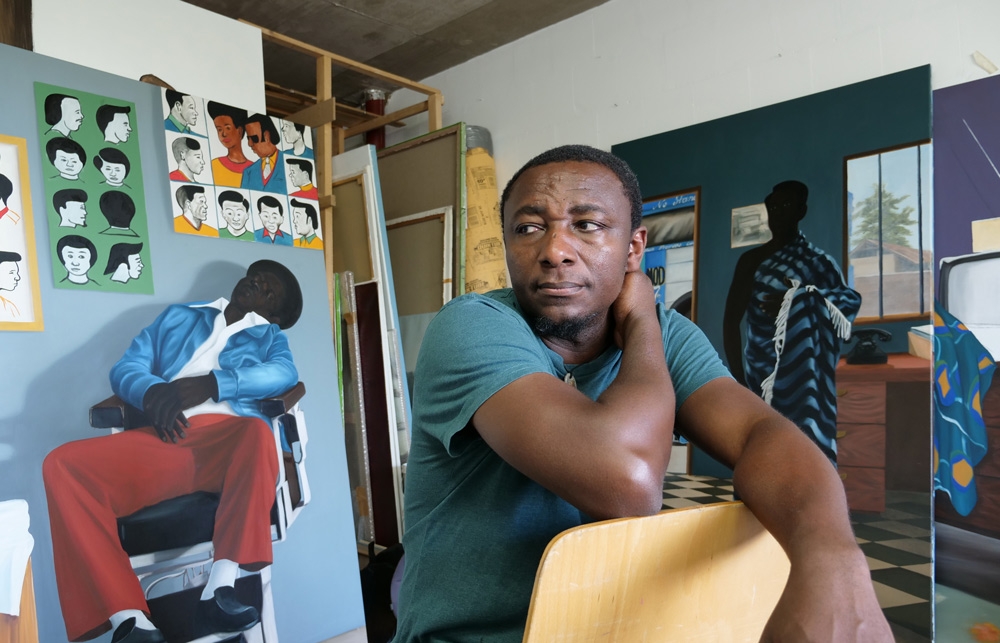 "I'm doing it for my own well-being, but also I come from a culture where we don't write down our history."

How do you title the works, and how important are the titles for you?
Some ideas I have in advance, sometimes I come up with them as I go. But yeah, the titles are important. There are some works that I started with the idea of a particular title, but when they're done, it may not feel like it works for that title. I like one or two-word titles and do that quite often. I feel like using the words that best depict that moment in time, the words I feel represent that particular moment is what I would like to express.
Now that you have described making a painting that fuses your life here and your life back in Nigeria, do you see that as something in your future work?
Probably. Sometimes, when I start a piece, when I come up with an idea, I usually say, "Okay, the art of rendering for this work will probably be two or three different versions." It's an idea. So I will probably approach it from two or three different angles. There is a work that I did that I call Right of Passage. It's about the passing on and how, in my culture, when an older person dies, we believe that the masquerade embodies the spirits, and they come to lead the spirit of the dead to the other side. I like to touch all these parts of my culture.
Because, for me, what I'm doing right now is a way of documenting myself, and my life and my culture, for my son, and for the unborn, for those to come—so that it is not forgotten.
Tell us more about what motivates you to document all of this.
We adopt western culture a lot as we grow up. Of course, I have comfort with it, but I also saw it too often. It's a beautiful culture, but it's not our culture. And so there is always a conflict of interest because certain things are not practiced. And, I would say, if you're putting a square peg in a round hole, it just wouldn't fit.
Our orientations are directly opposite of each other, and people don't consciously understand that. For a lot of Africans coming to the European culture, you have to actually kind of adapt to European culture in order to function in the society. So you will say, "Okay, I blend into the new society." But that is not often the case when a European goes to Africa. He is not changing, but the Africans are forced to change their way in order to suit his needs, which is wrong.
How do westerners or Europeans react to your imagery? Do they have a conflict understanding or accepting it?
There are several ways. I've been asked sometimes, "Why do you only paint black people, why don't you paint white people?" And I’ve said, "Right now, in my head, that's all I see." I want to get that picture out of my head. I have so much in my head that I'm not done with, ideas that are still rumbling in my head. Maybe when I'm out of ideas, I might shift. There will be points where there will be white people in my paintings, definitely. That's coming. I'm just not there yet. But right now my mental state is not present in this place.
Let's say I'm not a progressive person, I'm an old school one. I think old school. And so when it is time for me to think that this is now the old school of the near future, I might treat it.
I heard something similar when I spoke to​​ Esiri Erheriene-Essi who reflected that she enjoyed going to museums but nobody in the pictures looked like her or most of the people in her life.
Yeah, Kerry James Marshall said that. The same thing happened when I came here, and I walked through the museums, and I couldn't see anything that I could relate to. The only time I see a picture of a Black man, it's the servant or something. I understand that you see us like this. But this is not who we are. Because that is just a fraction of my people.
Most of what western people see in museums is work that is familiar, and, for some, when they see the work of an artist who paints Black people, it's disconcerting. But many people didn’t notice for hundreds of years that Black people were missing from the paintings…
People ask about that question, and for me, the moment of that realization is an affirmation of my conviction that what I'm doing is the right thing. I'm going to continue doing it. Because I do question myself, “Is this going to be receptive?” In the beginning, yes, I did have that conflict. I questioned myself. But then I realized, “Oh no, man, I don't have to.” I don't have to justify why I paint the way I paint to anybody. Not at all. I don't owe an explanation. I'm just going to do my thing, and here we are.

Peter Uka's newest solo show, Inner Frame, is on view now at Galerie Voss in Dusseldorf, Germany through October 24, 2020. He is also represented by Marianne Ibrahim in Chicago.