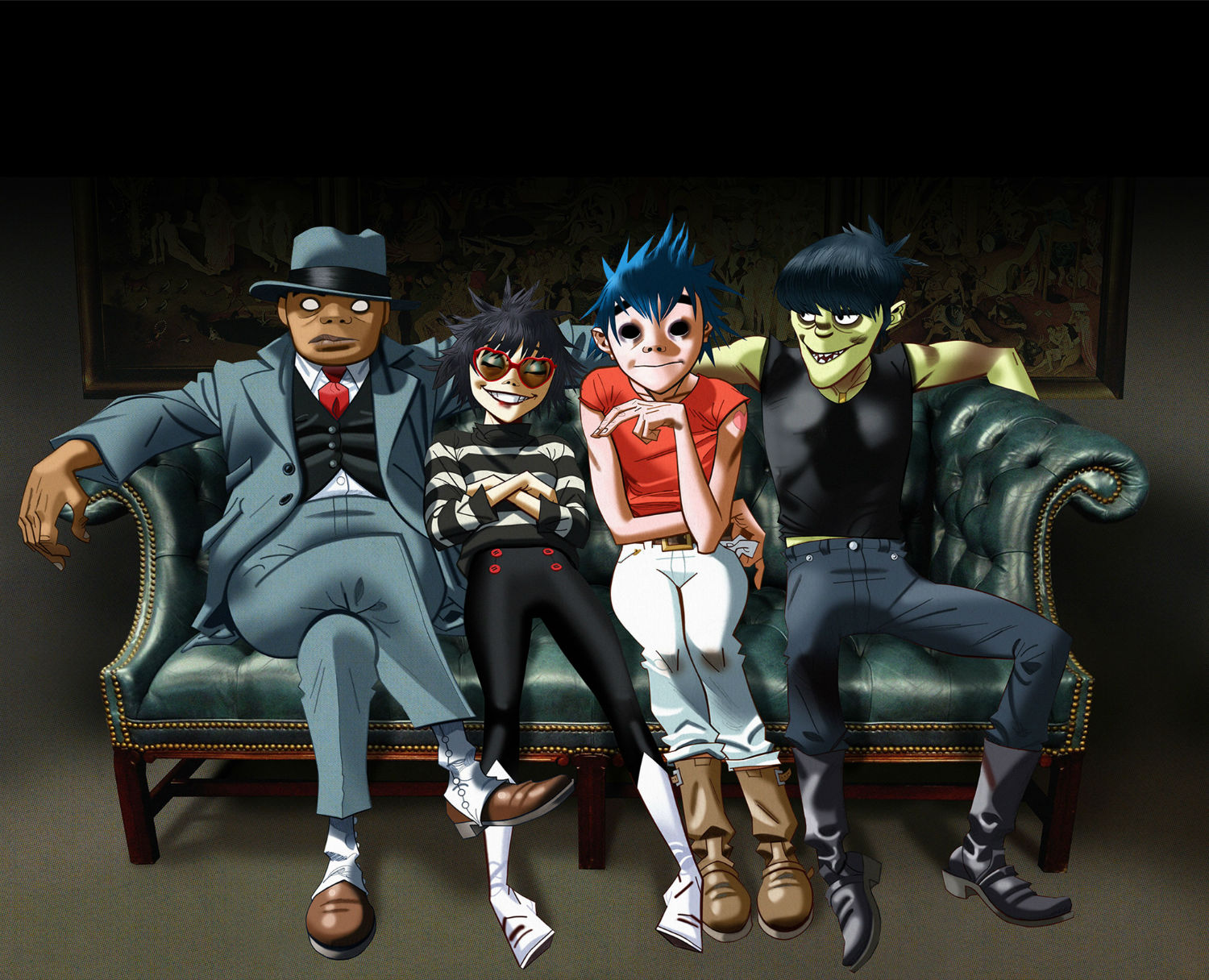 In 1998, Jamie Hewlett drew a virtual band that became world famous. Gorillaz consists of four cartoon members with four distinct personalities: 2-D, Noodle, Russel Hobbs and Murdoc Niccals, who are brought to life by Hewlett and an ever-evolving crew of musicians. They just made the freshest comeback of the year with a new album and tour, Humanz, visually powered by Hewlett’s live animation, 360 music videos, detailed backstories, covers, and virtually every single element of the band’s stage presence. His impact on our generation’s visual culture runs deep, and Gorillaz is just one of his many projects, from comics to opera.

In the age of artificial intelligence, a virtual band is appropriate, and Gorillaz have cultivated a soundtrack for a lifetime, with a 20 year history of showing up right when we need them most. They’ve helped an entire generation dance through the darkness, and in the words of Gorillaz guest star Vince Staples, “The sky’s falling, baby, drop that ass ’fore it crash.”

Kristin Farr: Happy Birthday! It’s nice of you to do the interview today.
Jamie Hewlett: Aw, thank you. I don’t have time for a day off. It’s all good.

How has the band changed since their last release almost a decade ago? It seems like a lot of shit went down for them between now and then.
A lot of shit went down, indeed. They’ve changed along with the world, I suppose. I dug them out of a little box that I kept, and the world had changed, and then, during the making of the album and the creation of the videos and music, the world changed even more. So they’re a little broken and disillusioned, and a bit more determined.

We really need them right now.
It’s funny, a few people have said that, which obviously gives me a warm glow all over to know that people are happy to have four cartoon characters back, and that, in some way, it helps. It’s strange. I never would’ve imagined that.  All the Gorillaz albums have been a little political. We’ve always been trying to say something, but we’ve kept it hidden between the layers, not going on our soapbox and preaching what we think. But there’s always been a message in there, and the best delivery is to to let people discover it themselves. I think this album is probably sounding like the most political to date, and I think that’s because we can’t help ourselves. Everything’s just gone to shit in the last couple of years, so it’s coming out in the work.  It would be impossible not to recognize or have feelings about the way the world has changed and the sort of shit that’s going on; hence the name, Humanz. It’s an appropriate title for an album because it’s sort of a question. The Z on the end of Humanz puts me in the mind of artificial intelligence, robots, programming, conditioning, brainwashing and control, so it’s kind of asking the question: Are we still human? Or are we humanz? Are we aware of what’s going on? It’s up to us to make a change, to make things different, to do something. Sometimes we need to wake up a little bit. 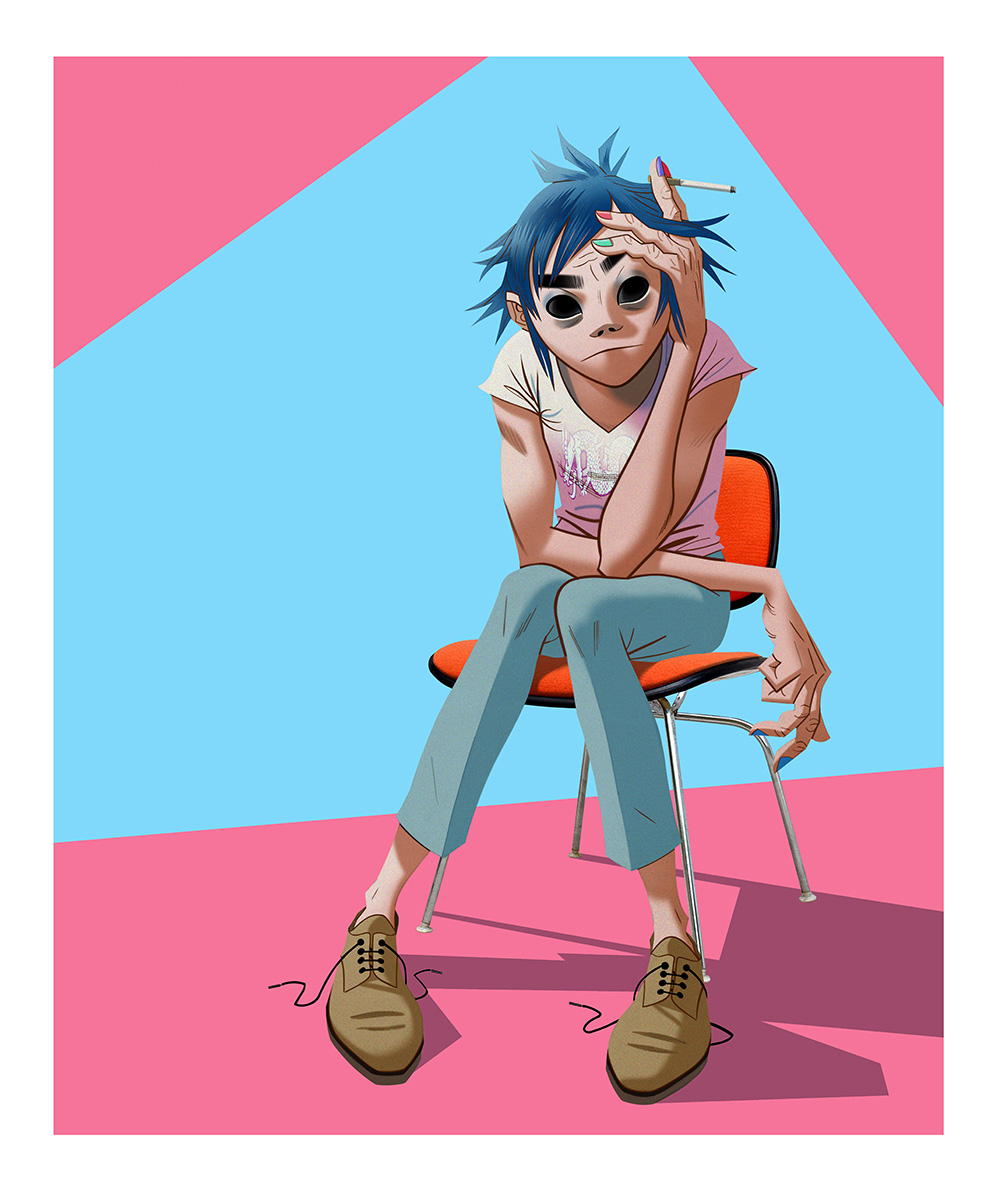 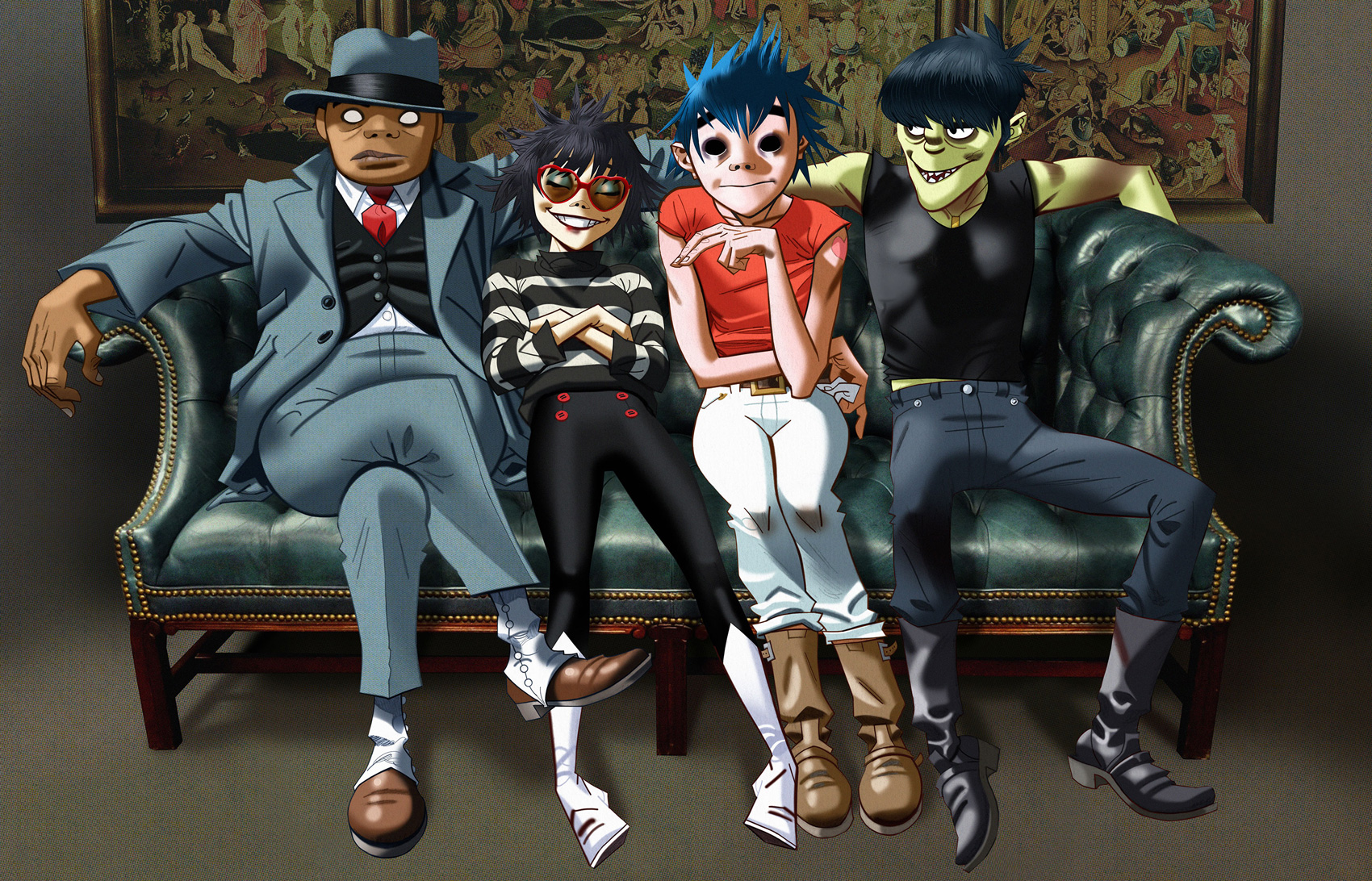 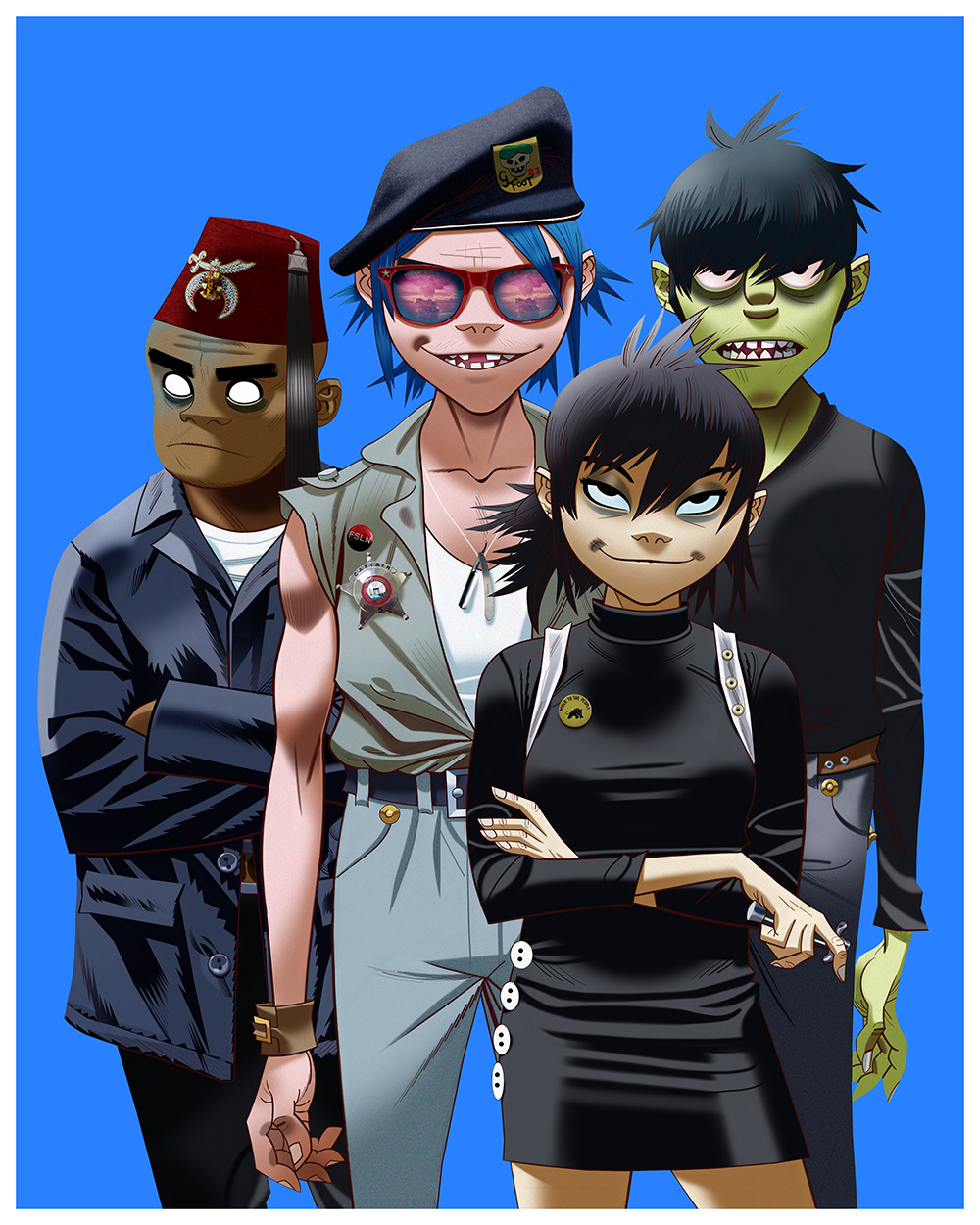 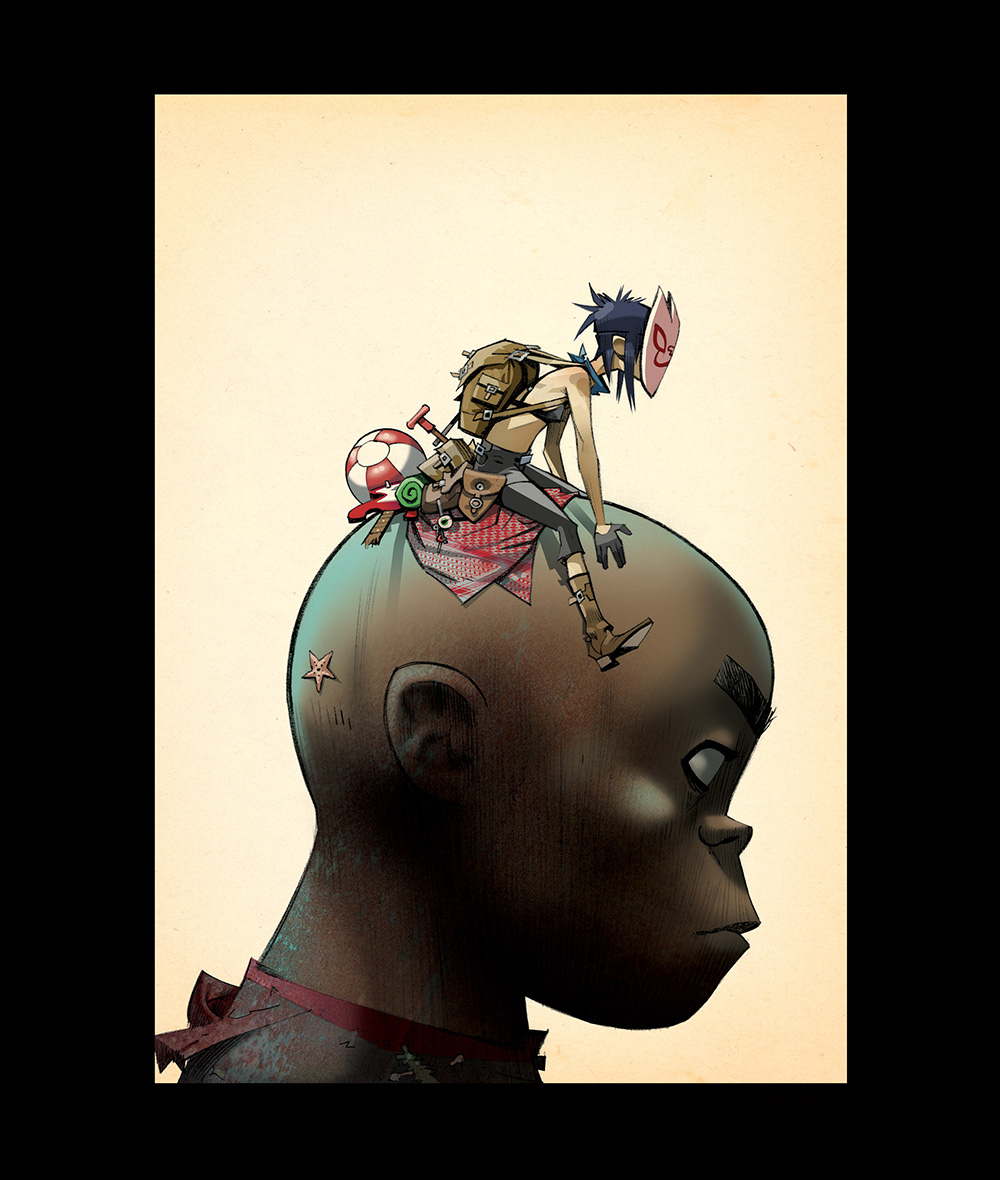 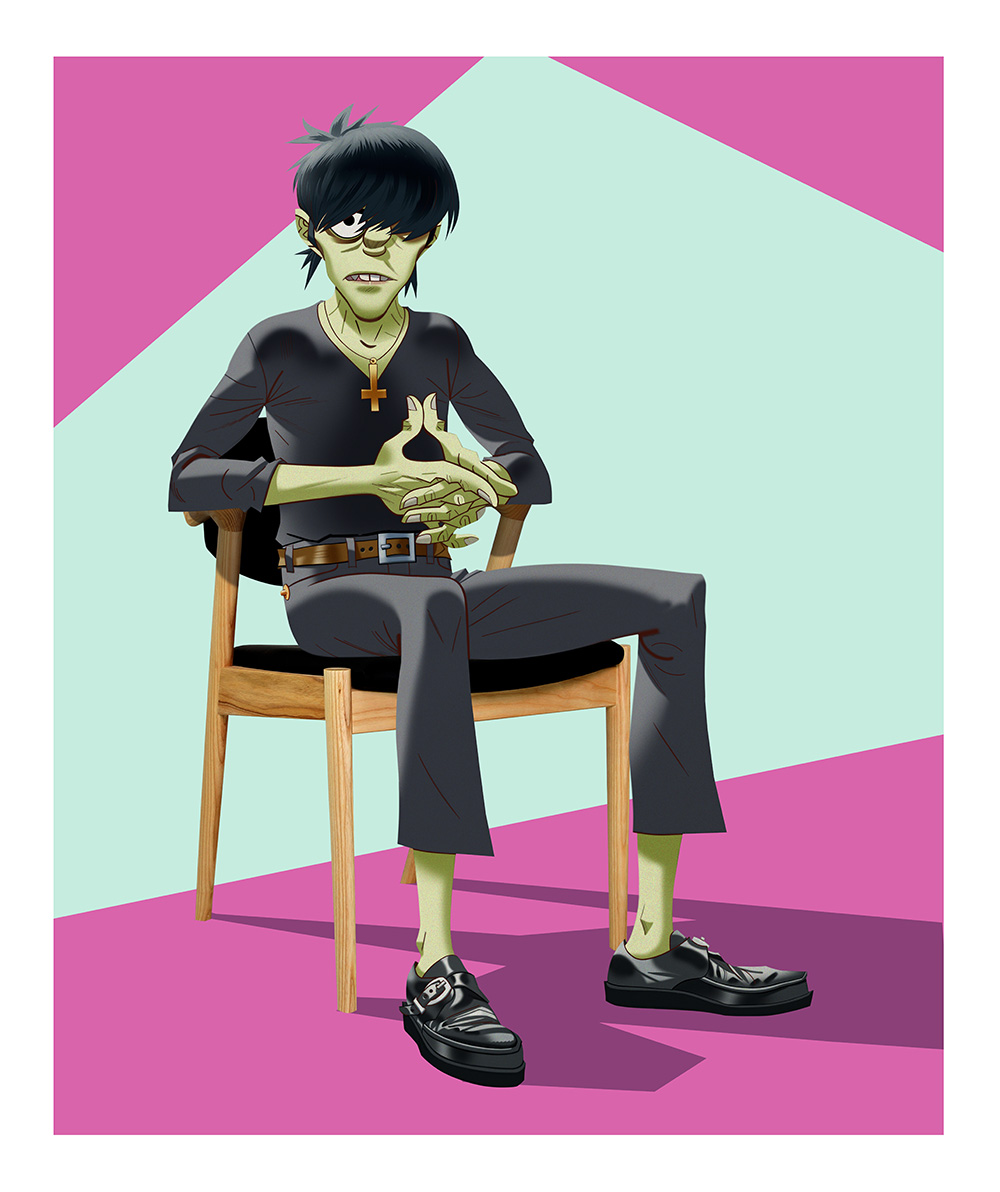 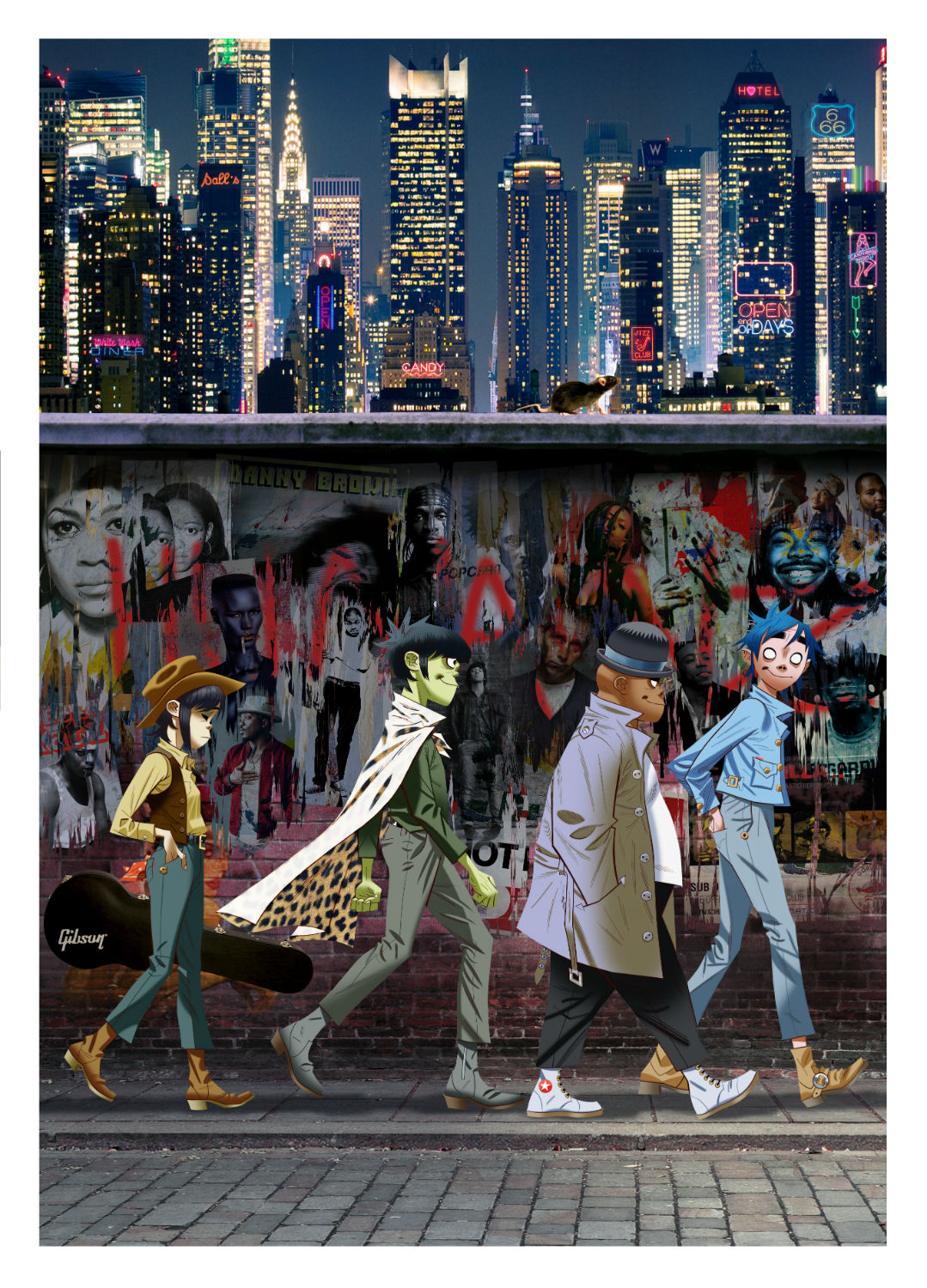 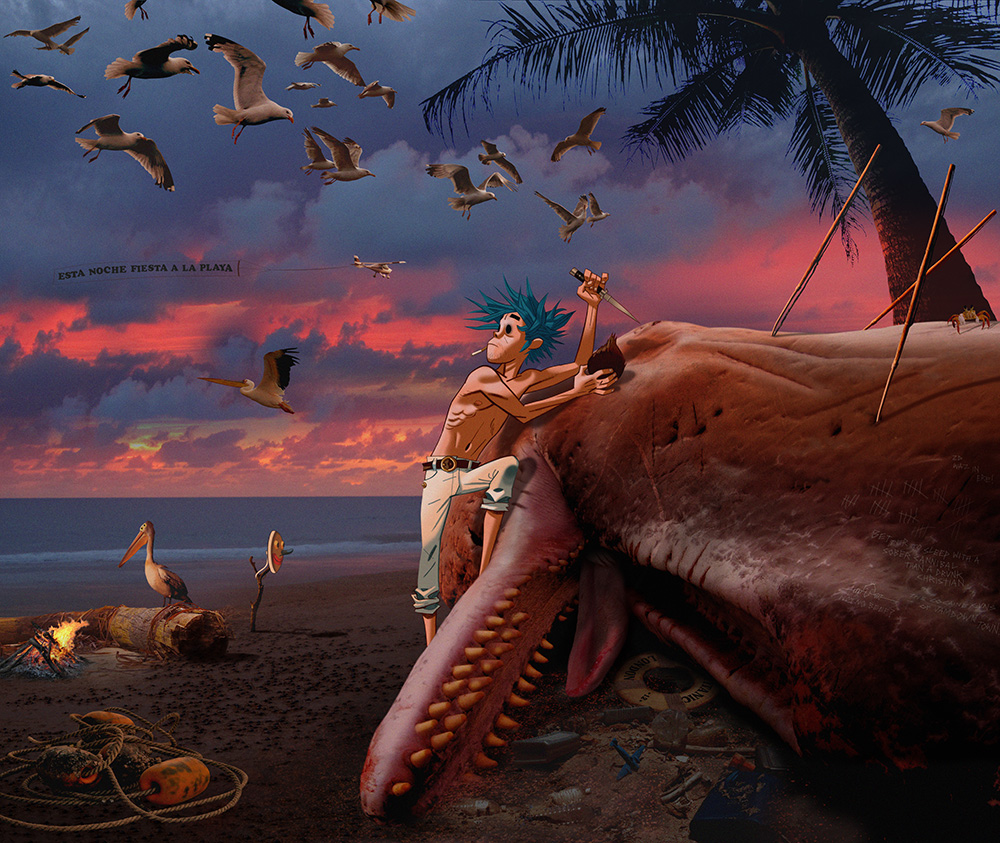 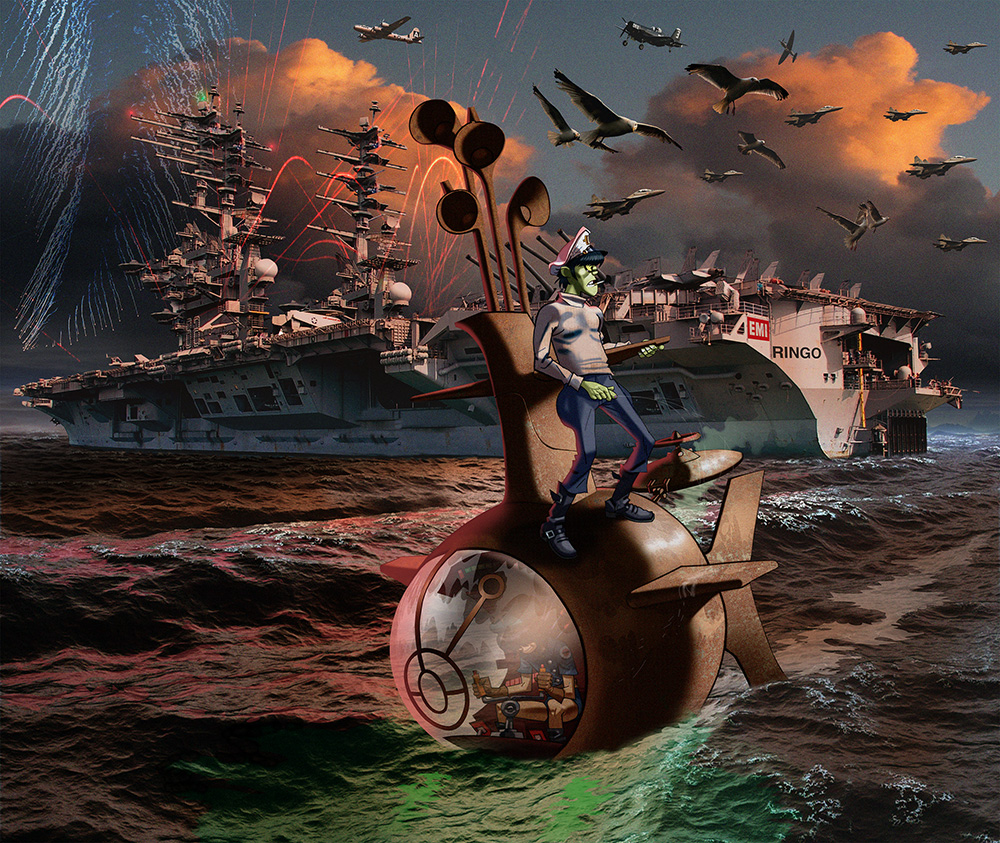 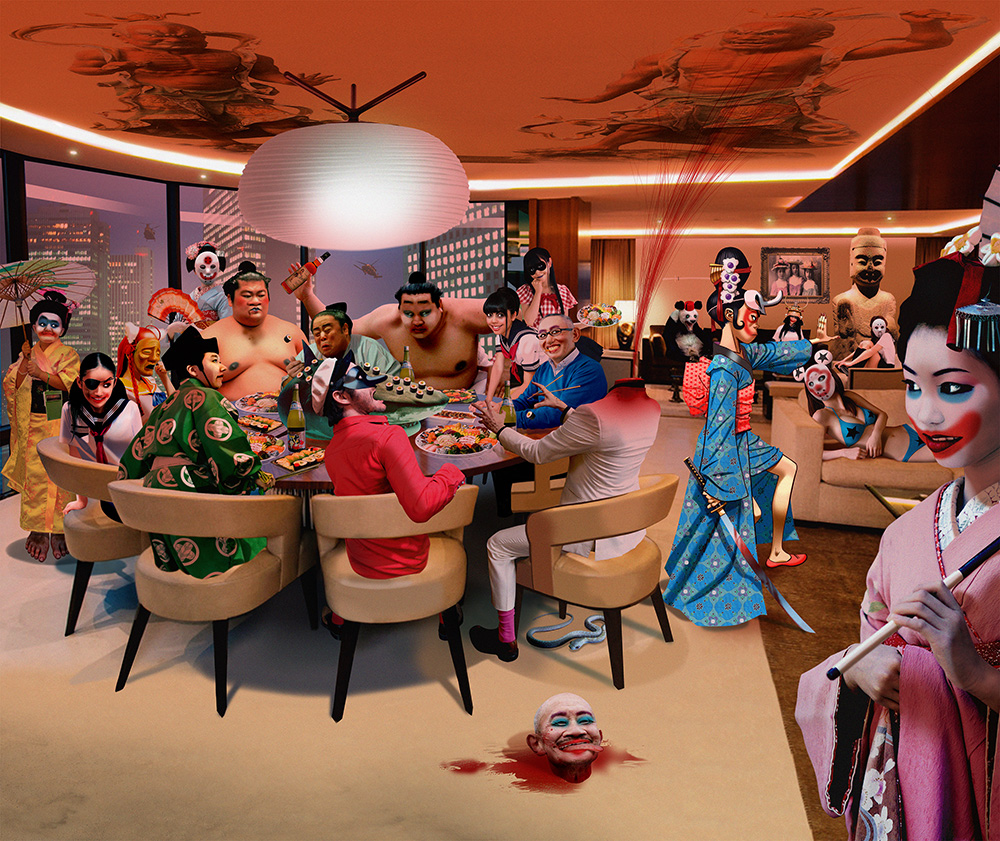 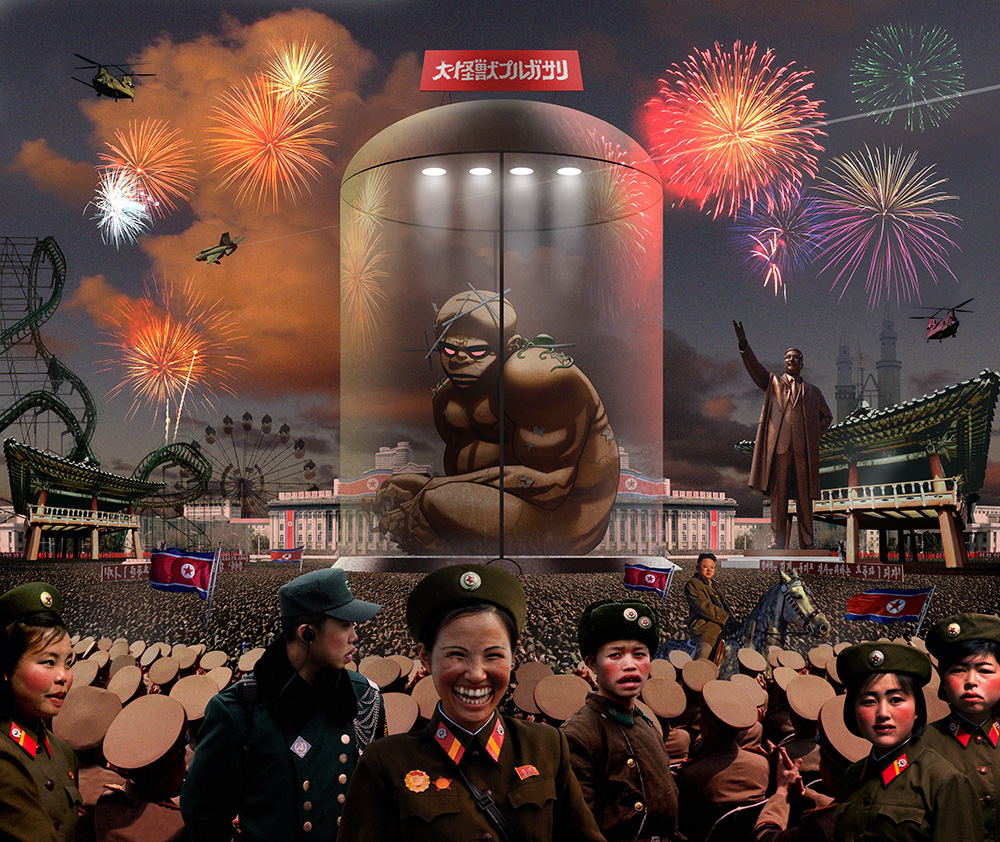 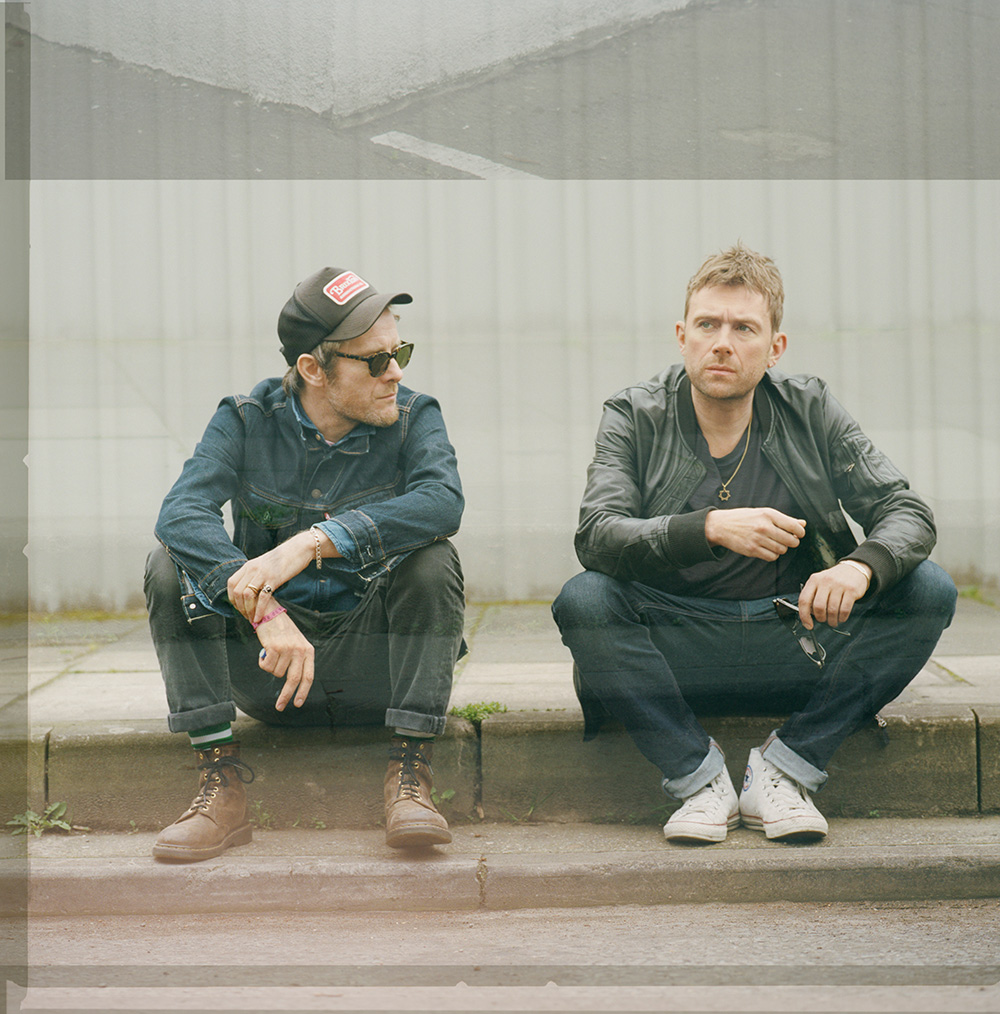 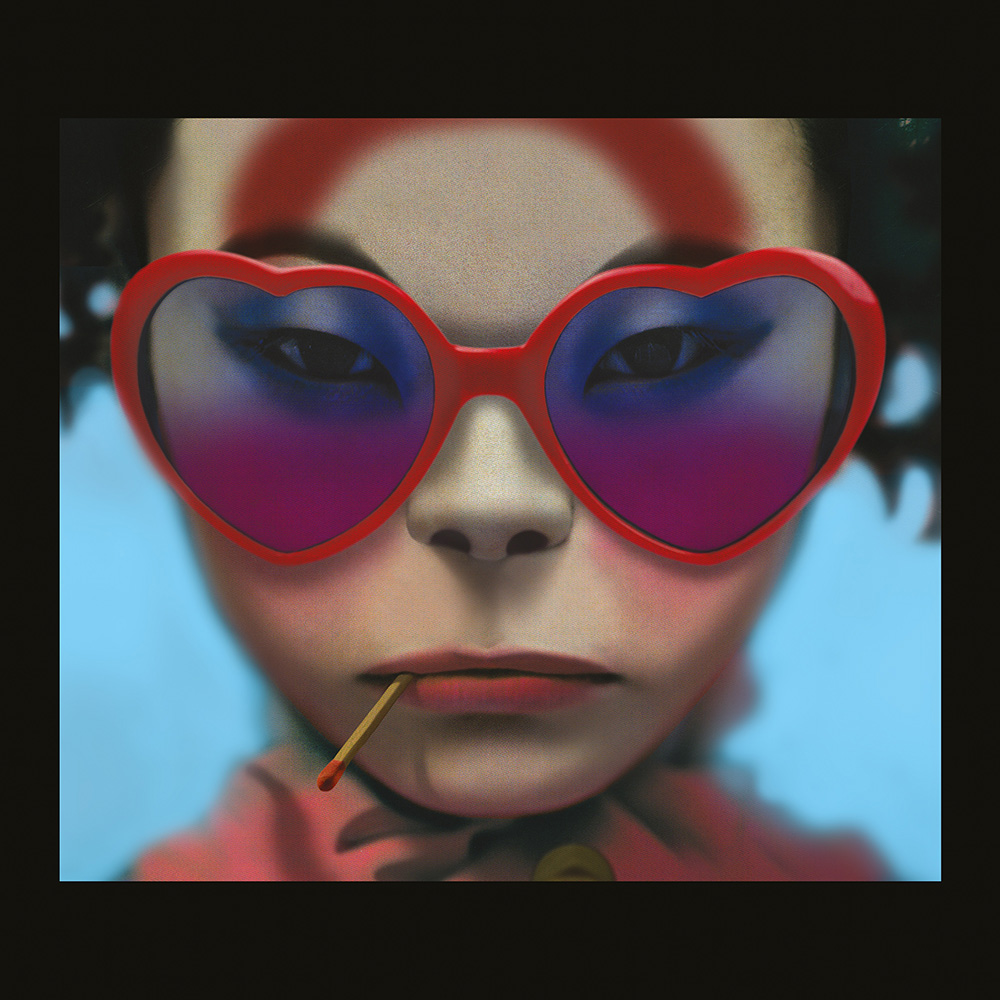 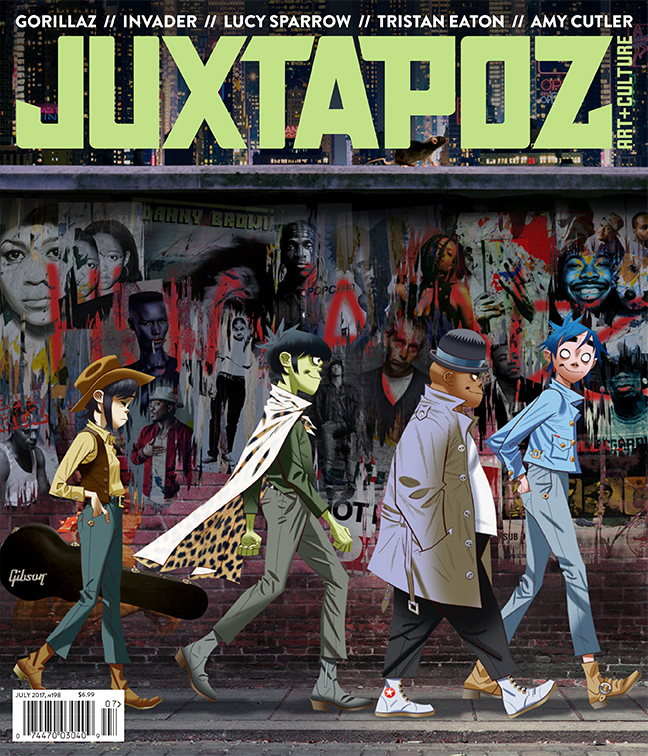 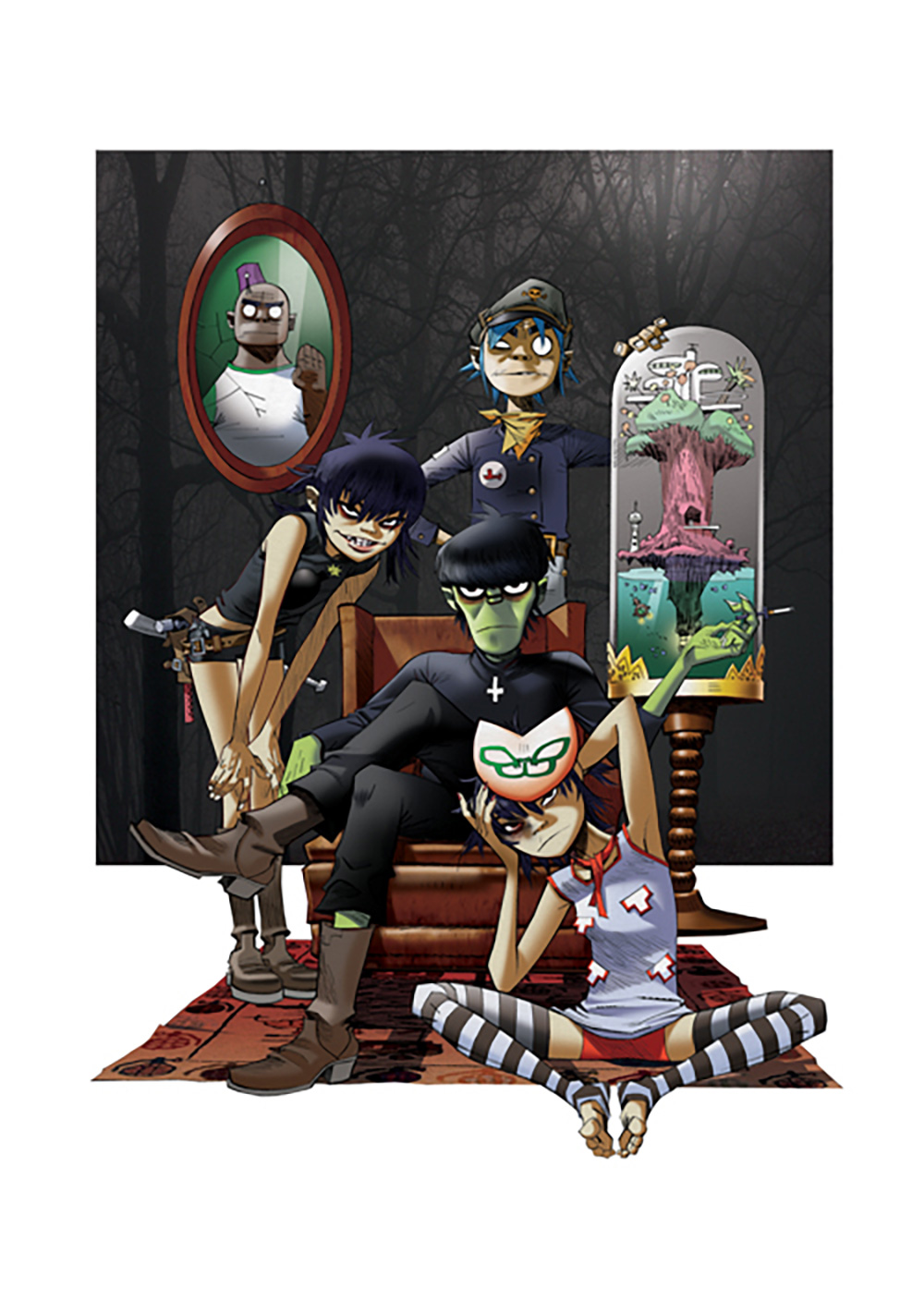 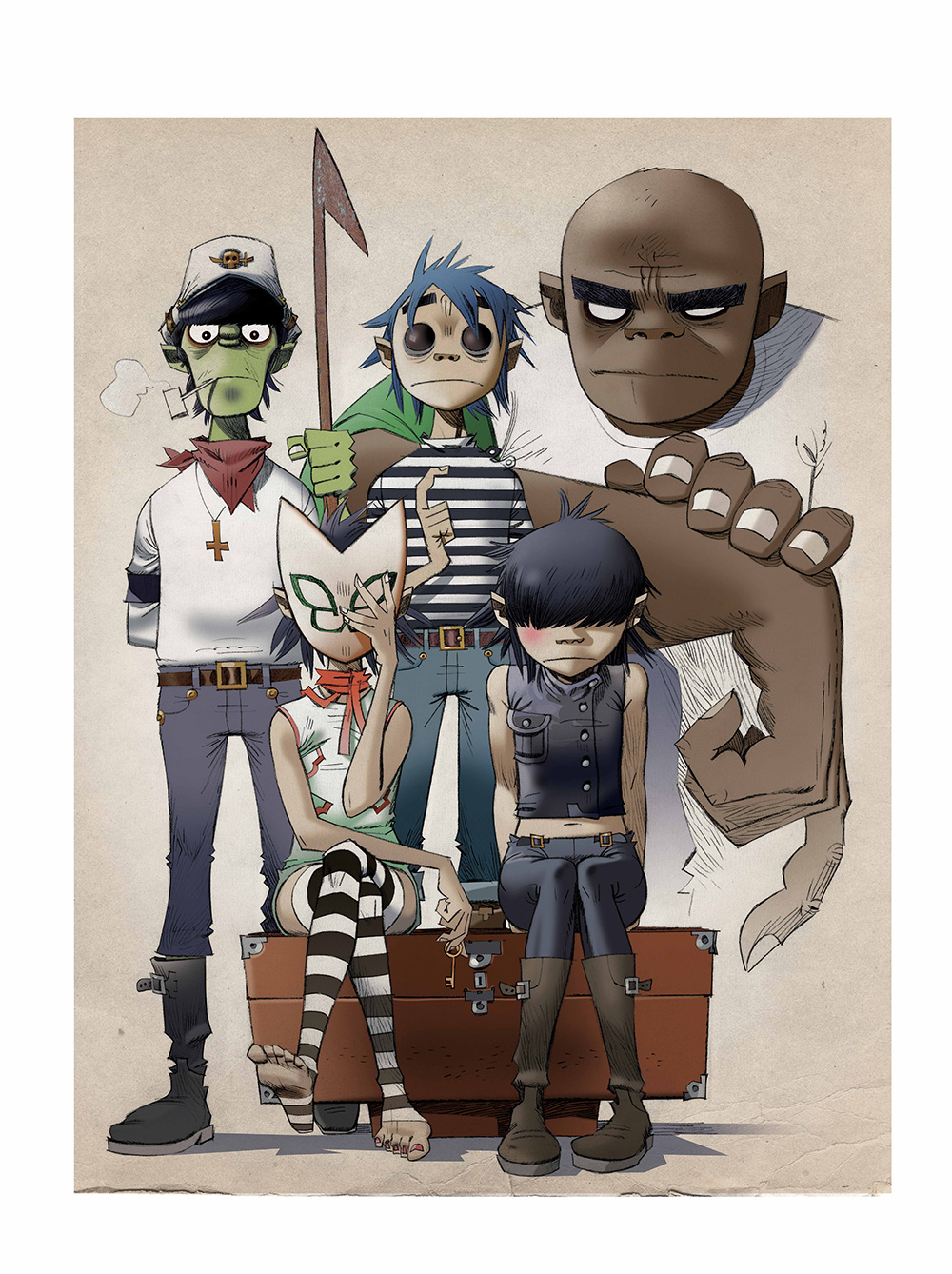 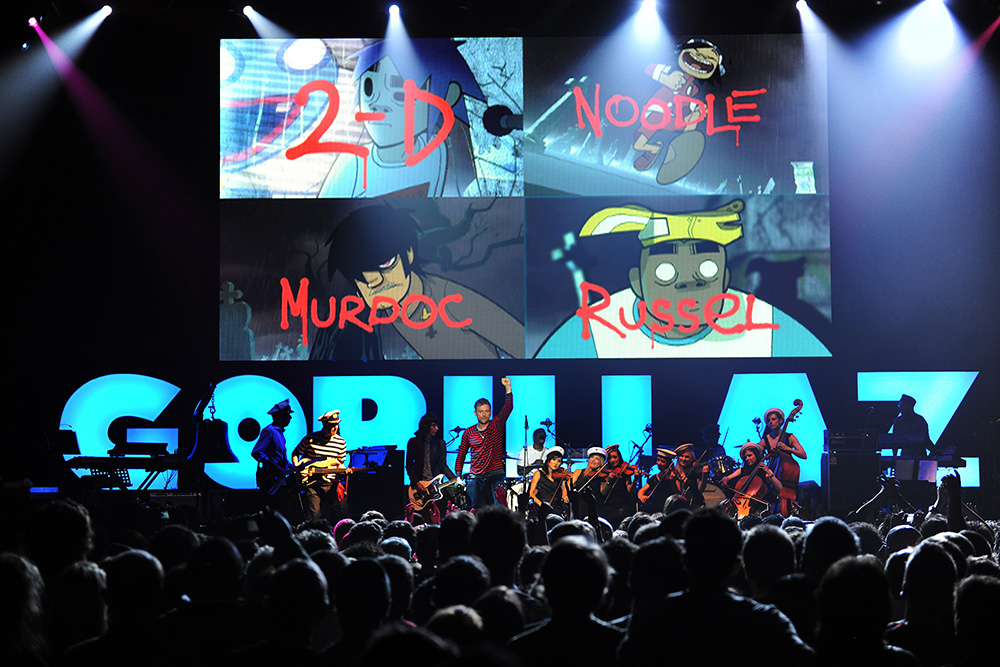 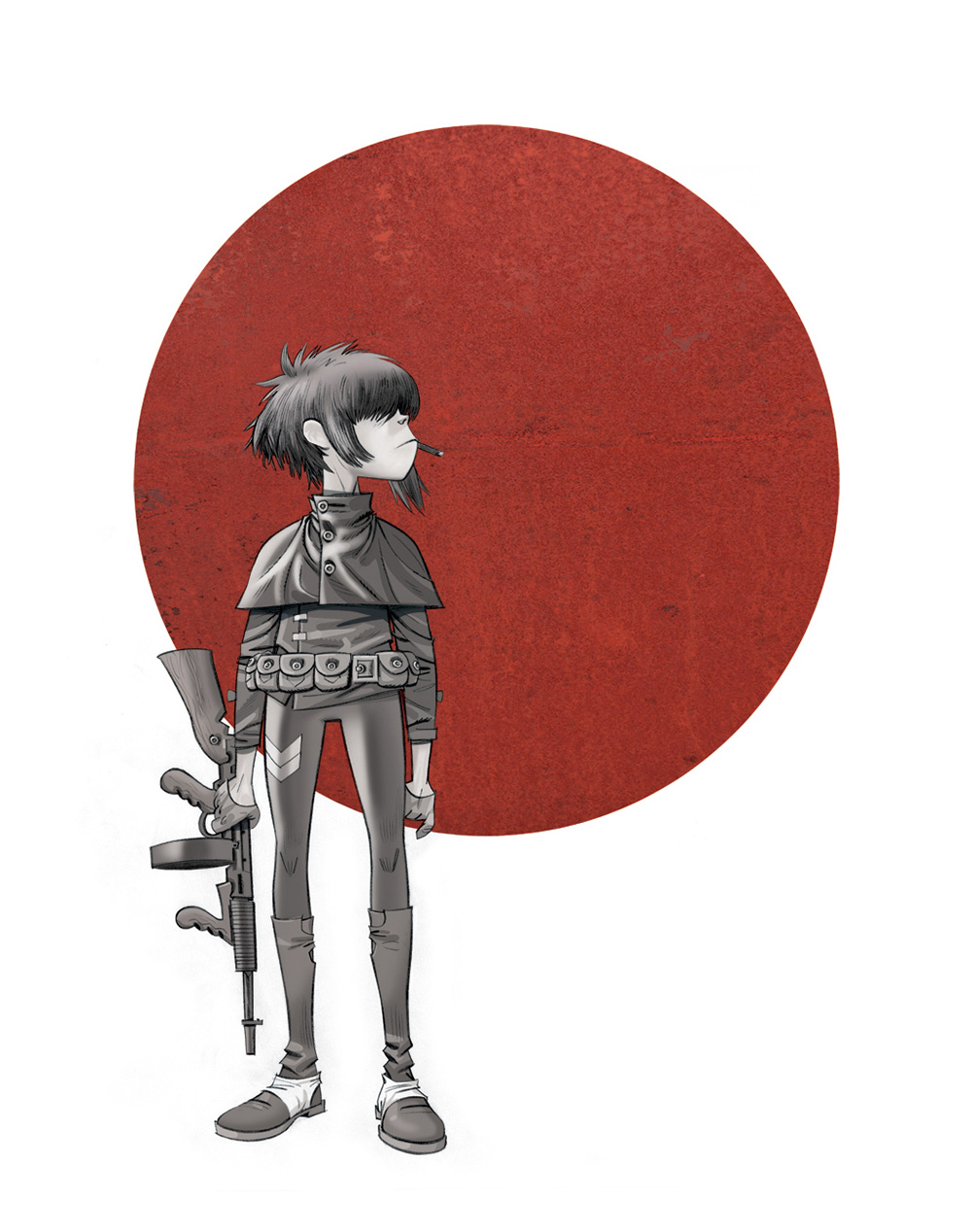 Is that why the band got back together?
No. That decision was made at the end of 2014. We agreed we were interested in doing another album, and then Damon [Albarn] was working on Blur, so he was already playing around with stuff, and then he started making the Gorillaz music in 2015. So it’s only been two years since we started putting it together. It’s a slow process, and I wasn’t in a hurry. It needs to be right and follow its organic path. The ideas are always around, but picking the right ones at the right time, and putting them together in the right order… it took a while to get there.

You’ve been busy. Even just a 360 music video alone sounds like a lot of work.
No one told me making a 360 video would be so hard. When you direct something, you show people what you want to see, and you cut what you want to, but with 360, the viewer has free will to look at whatever they want, so you have to build a complete universe, and you have to hope they’re looking in the right direction at the right time. You’re using sound and lighting effects, but it still doesn’t mean that people are looking at what you want them to, which is fine. It often means people watch the video three or four times to catch everything, so that’s not a bad thing. It wasn’t easy, but it was fun. I learned something new.

And you broke a new YouTube record.
Apparently it was the most watched 360 music video on YouTube, but I don’t know how many 360 videos there are on YouTube. I think there’s probably five, so I’m happy. But at the same time, it’s not like it’s the biggest watched video on YouTube ever. That would be something to celebrate [laughs].

There’s still time.
It’s just the beginning. There’s been a lot of work, but there’s a lot more to come. This entire year is gonna be Gorillaz stuff. Obviously, when I make a video, I work with animators, but everything else is done by me. That’s why I’m working on my birthday. Can’t get a break!

How come you decided Murdoc would be naked in the first video?
Well, because he takes a bath. And no one takes a bath with their clothes on, do they? The intention was to cover his penis, like you would never actually see it, but then we spoke with the legal department, who said, “No, it’s fine.” And then YouTube said, “It’s fine!” It’s just a penis. Every man has one. So we’re like, great, and off we went. And, of course, when the video was finished, they said, “Maybe not.” It was too big or detailed! I think they were imagining it might look like Mickey Mouse’s penis, but it was the real deal, and it was a bit too much. I thought that would be a first as well, the first animated penis on YouTube, but no. Just as it was about to go live, some poor guy at the animation company had to spend an entire day pixelating Murdoc’s penis. He came to work and they said, “Guess what you’re doing today?” Not really a fun job.  We’re scared of penises, we’re scared of nudity, but we’re happy to watch people killing and beating each other. Show a penis or vagina, and people get upset. Why is that? What’s wrong with us?

Good question. Are the characters self-reflective?
Oh yes, completely. The way we write the scripts, stories, characters and their backgrounds is usually based on real things that happen, and all the characters in the band are an amalgamation of everybody who’s part of Gorillaz. So often, when you have an adventure or an experience, or something crazy happens, it tends to get written into the background of one of the characters. Damon is Murdoc, basically. When Damon has an adventure, it tends to happen to Murdoc too.

You can be uninhibited with the music when the virtual band members are the focus.
Especially for Damon, it’s freeing to be able to experiment musically. There are four animated characters that make up the band, which allows him to work with whoever he wants to, and explore those relationships with music. It’s different for me because, as an artist, I can draw whatever I want. There’s not something I’m supposed to be doing where people will get upset if I don’t do it. I can always experiment. But if you’re famous for being in Blur, people expect a certain type of thing. With Gorillaz, we can do whatever we want. We’re completely free, and we don’t have to answer to anybody. It’s a wonderful luxury to have that labor of love and do your best work.

That must be why the new album feels so good and authentic right away.
It’s completely authentic, yes. We’re being completely honest, and I don’t think I could work any other way. I had a brief period of doing advertising work and I hated it. You get paid a lot of money, but you don’t get to be yourself, and you end up having to do what you’re told. I love being able to do what I want. It’s really a joy and exciting to be in control of what you’re doing.

What will happen in the next video? A pretty strong narrative was launched in the first one.
I can’t tell you what’ll happen, but we’re working with real time animation at the moment. It looks like old, traditional cell animation, and somebody puts on a funny little suit and jumps around, and the characters repeat what that person does. So that means we can do live interviews with the characters, and in the future, they could go on stage and perform, which is something we’ve always wanted to do. We want them to play their own concerts. The technology didn’t exist before, but now we’re almost at the point where they could. I’m going to use that technology for the next video. It might be a dance video. I’m thinking of Michael Jackson’s “Thriller,” still a great video. I fucking love that video. I’m into dance routines.

You have a lot of people waiting on you to create the live shows for the tour.
I’m working with a company called Block9. That’s another element where I have people to help, because without it, I’d be in an asylum by now. We’ve been putting together the graphics for the first show. As the tour goes on, we will be adding and updating, and introducing new visuals to the set, so it’ll be constantly changing and growing. That’s what we did with Plastic Beach as well.

A good reason to see as many performances as possible! Tell me about the killer image on the cover of our magazine.
I had to do a bunch of images that showed all the guests and collaborators on the album. That one shows just about everybody on the album on that wall. It’s very hard to do a cover with 30 people and the band, so I was working with a Last Supper sort of idea, which didn’t quite work out, so that’s the image with the most people in it.

You and Damon made an opera, and there’s a German word for art like that, Gesamtkunstwerk, which means “a total work of art,” incorporating all art forms. Gorillaz can be described that way too.
I’m a very visual person, my whole life is visual. I’m obsessed with the way things look, so if it’s visual, I should be able to do it. Or I should be able to try anyway. Designing costumes and sets for an opera isn’t that different from comic books, which isn’t that different from animation or directing videos. It’s telling a story, really, so I’m not afraid to try different things. And it’s the same with music. If you understand music and rhythm, then you should be able to jump from opera to hip hop to classical. It is possible, and Damon can definitely do that.  I hate doing the same thing all the time. I find it soul-destroying. I like to try new things, and I get excited by a challenge.  *

Catch Gorillaz on tour worldwide this summer and fall.