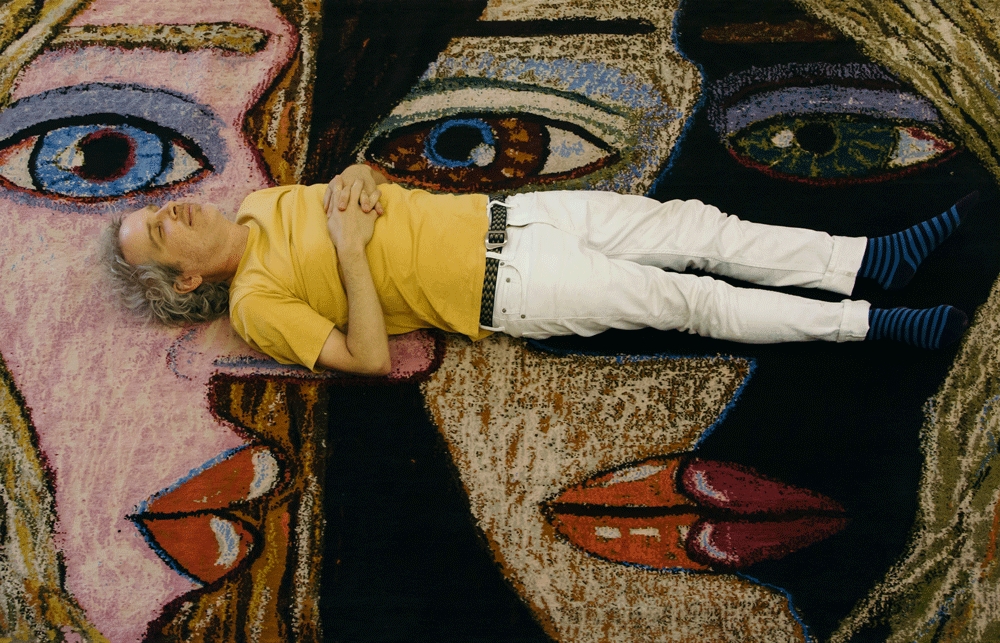 Just before I got on the phone with Ojai, California-based painter, Brian Calvin, I wrote a little note to myself: “Bridging the gap.” I wasn’t sure how this was going to infiltrate our conversation, but subconsciously this phrase sounded perfectly in tune with the prolific artist. From his 30 years of figurative painting, his love of Philip Guston, the influence of Funk art, his continued success with solo shows around the world, to the incredible coincidence of 2020 solo exhibits in China and NYC, Calvin has built a career of bridges. His work is vibrant, constant. His evolution appears dramatic when seen from above over three decades of paintings, but each show elicits a conversation with his past and present, and that seems exactly where Calvin is most happy—in the moment. We spoke on an early fall day, as California suffered through another heat wave with fires burning north to south and east to west. The paintings for Calvin’s seventh solo show with Anton Kern Gallery, Waiting, now at the gallery’s Upper East Side location through December 5, were about to be sent to the East Coast. We spoke at length about Guston, what it means to be a California artist and how the studio still excites him.
Evan Pricco: Your year is going to bookend in an interesting way: start with a show in China and end with one in NYC. And of course, every single thing in between. But there is a reality, regardless, that something changed in your life. So what changed?
Brian Calvin: Yeah. That’s a tough one. I mean, it's true. I would say, for me, certain parts of my practice didn't need to change, but they did change. I got back from Shanghai a week or two before they locked it down. I was there in January. Everyone was planning their Chinese New Year trips, and then it all got shut down. My show there was closed for weeks. So, it feels like 2020 has just been this nonstop story. It has for everyone, of course. I came back and hit the ground running because I had other projects to work on, but there's also always a lull after putting up a show, a little depression, trying to get everything back up to snuff. And then when the shutdown happened, I mean, we have two daughters, so I stayed home out of solidarity with everyone. Just like, what the hell is this?
I cleared out a little space in the garage and started working from home. First drawing, then some painting, just working at a more intimate scale. I could have gone into my studio, and I did every now and then, but it just felt off somehow. We're all trying to figure things out. It felt off to go alone to the studio and not stay with the family. But it's funny, because then I ended up being very productive at home. It was slow going at first, but felt better than running off to the studio to adjust colors in a painting.
Which reminds me of a Philip Guston quote from 1968: “The war, what was happening to America, the brutality of the world. What kind of man am I, sitting at home, reading magazines, going into a frustrated fury about everything—and then going into my studio to adjust a red to a blue.” So certainly, for me, how can you not allow the moment to push you in some other way. I guess I was feeling that. At a certain point, I started coming to the studio a few hours every afternoon just to keep it on my mind, to know that it was still there. After some months, I had accumulated a lot of work. I knew I had a show scheduled with Anton Kern, and I gradually shifted back into the studio to translate the new work into some larger scale paintings.
It’s interesting that you bring up Guston right now, as we are in the midst of his shows being postponed. He is such a pivotal painter for so many people, and coupled with that quote, or idea, of him, in the midst of social upheaval, going to the studio feeling a bit out of touch perhaps, provokes reflection. As this year's gone on, and especially as the social activism movement was peaking, did you have moments where you were like, "What? Maybe I shouldn't be here today. Or maybe I’ll change my direction?”
There were definitely moments where I just wouldn't be here. It's strange, because you want to be able to... I think there's this human urge to make sense of things, to contribute to things, and yet, obviously another key part of this moment is reflecting and, most importantly, listening. Although things are coming out so fast that there's also a need for immediate action. I think an artist of any kind, any person, but I say artist, because you're making things, I don't know how you can't go through a slight crisis of, “What are these things I'm putting out into the world doing?”

And yet, at the same time, I firmly believe that artists don't need to deal with things directly to create these pathways for people to imagine a world that's more like what they want. So I've certainly been, I guess you'd say, wrestling or struggling with all those thoughts, not to mention the privilege of my position.
So, staying here for a moment, if we were to walk into Anton Kern this month, will there be moments where you would remember, “Oh this painting came from this moment in the summer. This one is me reacting to XYZ…” As a painter, there's an urgency to create, but also, during social change, there's urgency that's even more immediate. Do you see it yourself, these changes happening in your work as these huge moments in America are happening all around? Can you see the immediacy in your marks?
That's a good question. And I don't know how well I can truly answer that. There's so much anxiety all around, certainly within me, within my family, our communities everywhere. Obviously there is coronavirus, but then the issues around police brutality, systemic racism, economic inequity are massive. And everyone’s been simultaneously feeling kind of stuck in lockdown, which was strange because it's hard to tell whether that stuck feeling helped people really reflect on these ongoing issues? Reflect on America? It seems partially, yes.
It's funny to come back to Guston, because he is one of the artists who initially really moved me. I understood he was speaking to the times without being so direct or literal. I saw my first Guston painting in person when I was an undergraduate at Berkeley Art Museum, and they had this one really incredible painting of a few hooded men riding in a little car on the outskirts of a city. The bottom section of the painting dissolved into raw canvas as if you could just paint your way into the scene. This was around 1988, so I'd only come to know his work. I hadn't grown up really knowing anything about contemporary or modern art, except for little things I’d glean from magazines or album covers. It was so powerful, a shock to my system. I was like, wait, painting is still “a thing” and can be really connected to its moment. The references made a lot of sense to me, and yet the scale, the way it was painted made me think, "Yeah, I'd much rather do that than draw a comic."
We can talk about Guston all day. Referencing that quote and seeing his work in person reminds me that Guston's move to more figurative work was so dismissed and critically unimpressive to the critics at the time. But he has built a foundation which many figurative artists nowadays use as a reference point. I like how so many figurative artists we cover now mention Guston as, like, their gateway drug.
That makes sense. I mean, he was so formative for me. I’m thinking of that time and my experiences at Berkeley and the Bay Area in general, before the internet, when everything still felt hyperlocal. Joan Brown was a professor there, and I was seduced by both Bay Area figuration and the Funk Art legacy. When I was in high school, I had an older friend who was up at UC Davis and hipped me to William T. Wiley, Robert Arneson, Peter Voulkus. I didn’t go to Berkeley knowing anything about anything, so these people informed my reality, really, when it came to art making. They certainly opened up the larger world of art. I took T.J. Clark art history classes at UC Berkeley. There were all these incredible people and resources, and I was just a sponge.