Angela Boatwright has toured all over the world with heavy metal bands, photographed some of the most prolific practitioners of NYC’s rich graffiti movement, and documented the hell out of New York’s skate scene. Having established a decade-long career, she set her sights on Los Angeles. Angela quickly began documenting the local punk scene, and the result became Los Punks, an intimate documentary film portraying the vibrancy of Latino teens and young adults keeping the backyard culture alive.

Desilu Muñoz: Where was Los Punks filmed?
Angela Boatwright: The scene exists in a lot of places around southern California, especially in LA, Compton, Huntington Park, and as far out as Pacoima and other parts of the valley, but I think it’s most concentrated right now in Boyle Heights, East LA and South Central, so that’s the emphasis of the movie.

What motivated you to focus on the Los Angeles punk scene?
It was a serendipitous encounter and the conglomeration of a lot of little things that led me down this particular path. I’m a huge heavy metal, hard-core and punk fan, so when I moved to Los Angeles, I started searching for people I could really get along with and understand. At that time I was shooting for Vans when they started their 2014 documentary campaign and asked me to pitch them any ideas I had. This just so happened to be around the time I was going to check out punk shows. My friend Ron Martinez, a booking agent for the Casualties, plays in a band called The Lower Class Brats, and we met because he also books some really close friends who play in Toxic Holocaust. Then, when I was getting into going to shows in LA, my friend Ron invited me to see his band the Lower Class Brats play in the valley. It blew my mind when I saw how many young punks were there. I had never seen anything like it. Even though New York is a bigger city in reputation and has a lot of scenes, they’re much smaller, in my opinion. 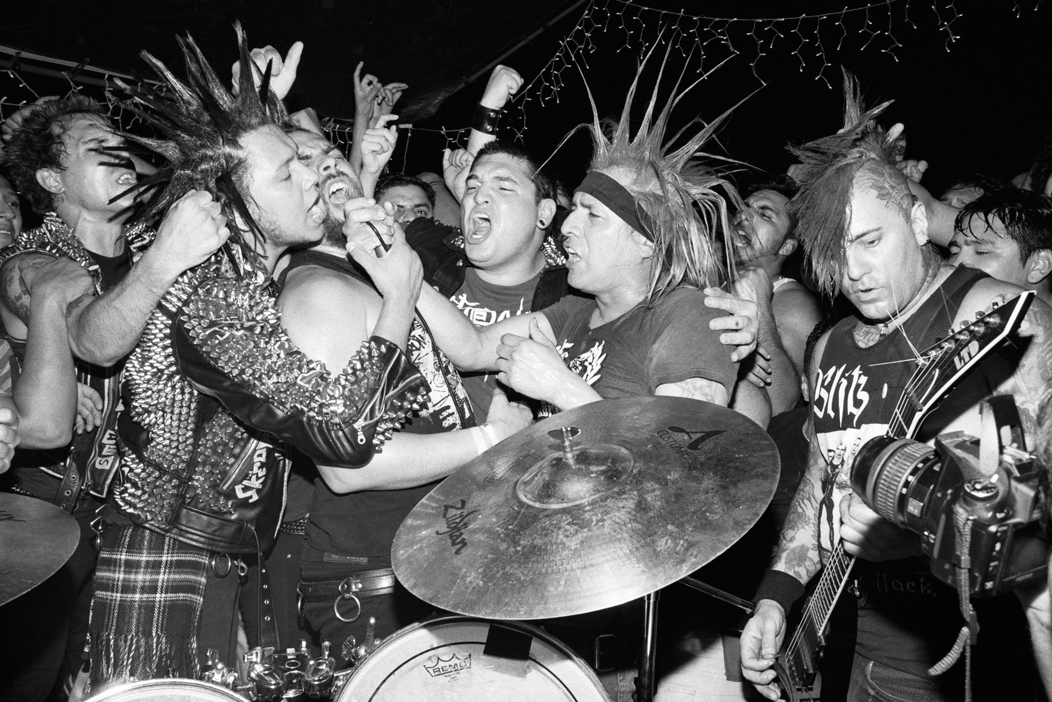 How did it feel to go to your first back yard gig?
I was invited to a backyard show in City Terrace and again, I was like “holy shit” when I walked in. I lived in New York for nineteen years where no one had backyards, so this was amazing. As I walked in, I saw punks with their booths, set up for selling patches and shirts of their bands. Ska, psychobilly, street punk and rock ’n’ roll bands all played at the same show. The people there all got along and played on the shitiest equipment, but it didn’t matter because this was their scene they didn’t have to impress anyone. Being there really blew my mind, and it was a very visceral feeling that wasn’t common sense, or me thinking “this is a really marketable thing.” Seriously, my whole body turned inside out as I kept thinking how fucking phenomenal this scene is. Seeing all of them take care of each other and wear each other’s band shirts, you could feel a sense of their community. Being at a backyard show makes you feel alive. The cops might come, you might get in a fight with the guy next to you, you might make out with someone; it’s all so unpredictable.

How did you develop such close relationships with the main characters in this film? Did it feel like you had to break down any barriers?
There were handfuls of punks that didn’t want me around at first, but then there were a lot of punks who were excited and wanted to share their stories. My whole thing was to be honest and responsive at all times.

How do you explain this punk scene to someone that’s never really heard of it?
Someone that’s never heard of punk? That’s crazy! I’d say it’s a bunch of young people blowing off steam and getting together while listening to really aggressive music and having a great time. This is what youth is about. It’s going somewhere that’s not entirely legal and doing things that aren’t quite approved of—being able to be free without restrictions because the long arm of authority isn’t there, and there isn’t some security guard waiting to bust you. It’s about having a safe space to be young and to be yourself for a few years until you grow out of it, or have to get a job, or maybe you stick around forever. To me, it’s a place people can go and really be themselves and totally let loose while they listen to really loud, obnoxious music and dance. 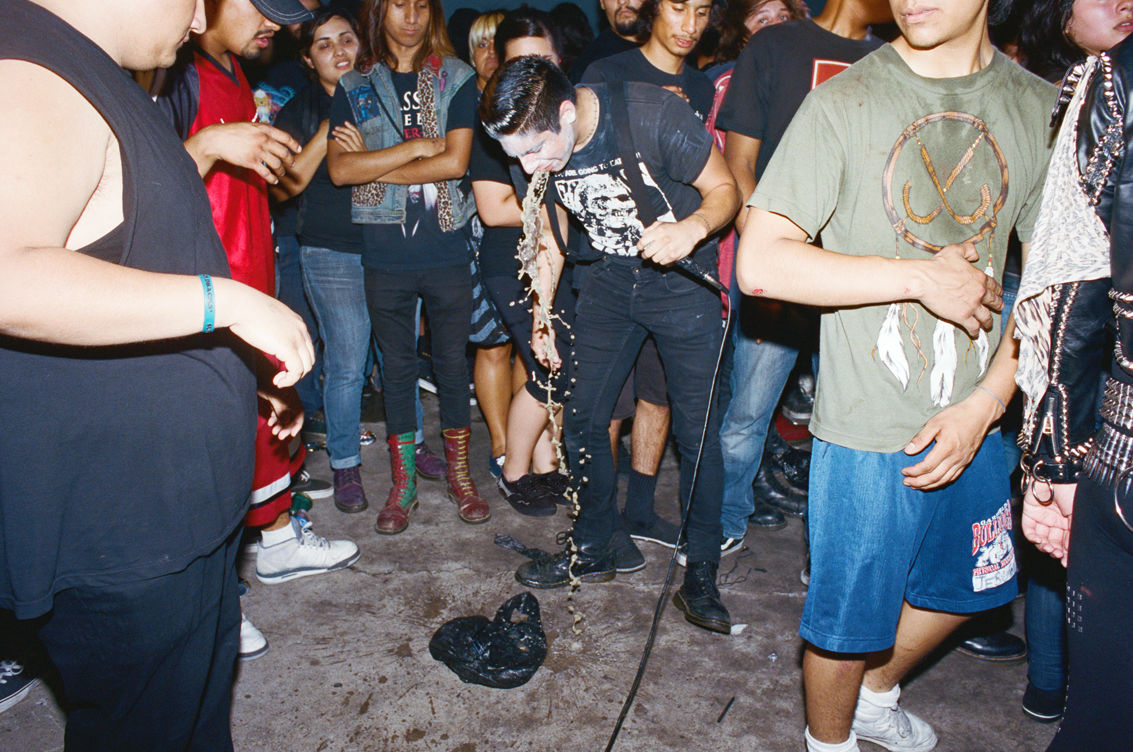 Can you tell us about some of your favorite scenes from this documentary?
I love the police raid scene where they come to investigate someone supposedly getting stabbed. I filmed that entire scene by myself. I had gone alone to that show just to take photos, but I happened to carry a video camera that night, so I busted it out right when the cops got there. It was hilarious because they accused this guy Rey of stabbing someone, but little did they know he’s the nicest guy and would never do that. I love the history section when it goes from talking about old East LA and then flips into South Central Riot Squad where the music is so intense. Thanks to Nacho, I called and met them in Watts and interviewed them myself. It felt like finding Bon Jovi or something. I was really hunting them down. That interview was three hours long and we only got to put a few clips in the actual film.

Do you think this film will change what some people think of punk?
I'm not sure. I definitely didn't make this movie for those in the know. I wanted people outside of the punk scene to enjoy the film as well. A lot of times I would think of the people that I grew up with in Ohio—someone like my stepmom who doesn't listen to metal or punk or anything remotely aggressive. I wanted to share the punk scene with people like my stepmom. It would have been really easy to sensationalize the scene, to show all of the craziness out of context. And truthfully, all scenes get crazy. Frat boys are insane, but I think it's far more interesting to show the human side of everyone involved—to give their lives a proper context because, no matter how crazy we get, we all still want the same things—recognition, love, respect. Punks, of course, are no different.

What’s the most gratifying this about making this film?
Meeting everyone in the scene, having all these new friends. I’ll be in their lives forever; not all of them, of course, but I know there’s some that I’ll never lose touch with. Getting to know them and their lives and to tell their story is a fucking honor. I’m so grateful to be allowed into their lives and to become a part of their lives. My life has become so much better since I met all of the punks. They have enriched my life.

Los Punks will be released on iTunes on May 15, 2016. For more information, visit lospunksfilm.com

Originally published in the June, 2016 issue of Juxtapoz Magazine, on newsstands worldwide and in our webstore.