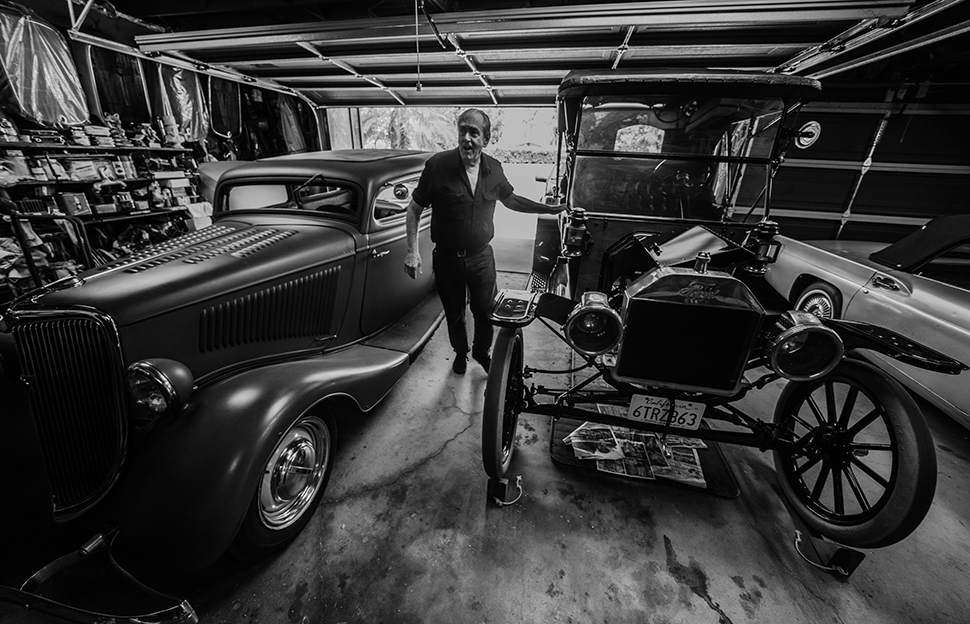 That rakish raconteur of the art world, founder of Juxtapoz, and Zap Comix denizen, Robert Williams, is coming to the Bellevue Arts Museum of Bellevue, Washington, for a retrospective of his life's work on October 4th, wielding a rich and meaty, 12” by 15” companion catalog from Fantagraphics Books. Whether seeking an arcane sub-chapter of art history or insight into the sociological implications of pop culture, there is always a reason to check in with the reverent rapscallion. The wicked humor and wisdom in Robert's paintings, drawings and sculptures snatch attention, then beguile with depth. Like frightfully funny parables, they can be enjoyed for the immediate wow, then appreciated for the exquisite allusions. After a wide-ranging conversation that bounced off every book in his wall-to-wall library, we took a spin in his 1914 Ford Model T. But that's for another story.

Gwynned Vitello: It's interesting, I've known you for a long time, and while prepping for our interview and reading your manifesto and the essays, what was really revealing was qualifying yourself, “As ill comprehending as I can I can be.” And that is so true. You're this maverick with a respect for history, learning and precision, but you're confounding.
Robert Williams: That includes all my faults, but my humility too. But it'll all be in this book I've got coming out. It's got every painting they could ever find that I've done, a little more than 300. It's a nine and a half-pound book with an introduction by your buddy, Mat Gleason, who's the equivalent of Carlo McCormick on the West Coast.

A good fit for you because Mat knows his art history and he isn't afraid to share his interpretations and opinions.
Well, you know, Juxtapoz came out of the outlaw world. And if Trump comes into even more power, if he starts a war and declares national control and things really get rough, you're gonna want these outlaw guys because they will stand alone. They'll fight, like Ron Turner, who's one of those people who's always stood behind the underground artists and all the people that went to jail, and that's not always appreciated.

You were definitely motivated to give voice to artists when you founded Juxtapoz. And it sure looks like figurative art has found an audience.
Well, Juxtapoz has survived conceptual and minimalist art and came out to defend the graffiti artists who no longer needs defense. I believe it has brought back and saved figurative art, so it has an historical place. But I'm not so narrow-minded to think everyone has to do figurative art. Conceptual art, Minimalism and Abstract Expressionism have just as much right as any other kind of art.

But there's other art, where you go to art school, and you're around a lot of people who can't draw, that aren't planning to, and they might be in there for about a year and then change majors. They're not interested in spending eight to ten years learning how to be the master of anything. They can't see sitting around drawing and painting all the time on the chance they're not getting anywhere. On the other hand, I do think Juxtapoz has put figurative art back into these art schools.

Maybe people have a hunger for figurative art because we're being marketed to by businesses with obtuse, unpronounceable names and being dictated by devices that all pretty much look the same.
I would die before I was considered someone who just copied someone's photo, that just wouldn't work for me. It's not a matter of ethics. It's like, how do you get to be a big shot? But there's really no rights and wrongs. Still, I personally have my old Protestant ethics that I learned as a child. I take pride in doing things honestly.

Hey, notoriety is very motivating. But there are plenty of students who cherish the opportunity to learn and take their time.
There are, but should you encourage them and take them down a road to starvation. Of the entire psychedelic poster movement, of all the poster artists in the '60s, maybe three of the five primary ones kind of made a living out of it.

Kind of made?
Kind of. Mouse had to follow along and take the crumbs that fell off the Grateful Dead's table, the girlfriends, the little whatever that comes with it. It was the same with the underground comics. There were thousands of them. I'd guess maybe five or six made a living out of that. I didn't make much. I supported myself selling oil paintings to do the Zap comics.

How did Crumb do it?
When Crumb came up to San Francisco, he met Victor Moscoso and Rick Griffin, who'd both been in LIFE Magazine, and he invited them into Zap, then S. Clay Wilson and Gilbert Shelton, who was an old cartoon artist. He started with two issues of Zap in 1967, sold them by hand on the corner of Haight and Ashbury Streets as the psychedelic posters were starting to edge into cartoons. Crumb had talent, everyone saw his talent, but he wasn't famous. He was a great observer and had an enormous ability to interpret things. In that way, he was a true genius. When I came in, I was a real nobody.

You refer to yourself as someone who did not have a liberal arts education, but you continually cite philosophers, writers and historians in your work, and in everything you do.
If you're interested in literature and art, you have to have an understanding of history and the classics. It doesn't take very long for someone to learn this and soon you realize that every major achievement since Greece has always been a liberal movement. The democratic philosophies of the Greeks, it was like some kind of scatterbrained liberal thing that later got concentrated by the people in power, and then they moved onto the next thing until another liberal thing came in and cleaned it up. If you're an intelligent person and have any pride, imagination and creativity, you realize you have to lean to the left because it's your only playing field.

That gives you the freedom to explore openly. How old were you when you were in military school?
Well, that was first and second grade, and they did not have art classes! They didn't have physical education either. It was drilling, and you'd have to go on an hour march on the playground, a real asphalt grinder. I had to get up really early and function, at that age, as a corporal. I was in charge of the other kids, had to make sure their shoes were shined. You know, I remember that.

They assigned rank at that age?
Oh yeah, it was hell. It was one of the toughest military schools in the country, Stark Military Institute in Montgomery, Alabama. In first grade, I won medals for drill, but by second grade, I couldn't stand it—yes, Sir, no Sir. My dad was a military man, in the Army Air Force, and was in charge of training for the glider forces. He was a very strict Right-Wing Southerner. My mother was very Liberal and from Indiana, so I had these two polarities to make judgments. My parents were married and divorced four times, so it was the ugliest domestic life you could imagine. My dad wasn't the kind of person you would go and talk to. If you went to my dad with a problem, you got your ass beat.

So, as the armchair psychologist, I deduce that you retreated into your own world, and that was a world of art.
It seems obvious I would have mental problems. Maybe there have to be mental problems there to be an artist. I'm highly organized and disciplined with art, and dedicated, self-punishing and a masochist about work. I spend so much time on a piece of work, it'll be like yeah, the feeling that if I'm dying, nobody else will be fighting for this thing. I stand this distance from people, so I never learned those social skills. For artists, it's not so much what you do, it's how you function and who you know in current society, and how you place yourself in trends and whatnot.

Sometimes those social skills can help work it, and sometimes a little audacity helps make a phenomenon.
Jeff Koons married that porn star, and he had that picture as big as a wall of his penis going into her anus, a big oil painting, and that's what he started out with. That thing came up for auction about 15 years ago, and I was, like, how's that gonna go over? It's silent, things like that. It probably went at a marginal price when someone thought, “Well, he's going to be famous anyway.” So many of these people who buy this expensive art never show it. They put it in warehouses for investment. Don't start looking into the background of art and how it's made because a lot of artists get to a point when they don't even touch their work.

Salvador Dalí, for one?
He had all those paintings and he spent half the time at the Saint Regis Hotel, but had six people painting figures for him in Spain. In fact, prior to the Surrealists was the Dadaist movement in Switzerland, spearheaded by a writer named Christian Zora, who was hung up on the poetry of antisocialism; in other words, fuck this, fuck that, fuck art. The Surrealist movement started in 1924, a bunch of writers who were running around and just stole the whole thing. When Magritte joins them, here's a guy who can actually draw and paint. Then, along comes this Spaniard Salvador Dalí, and he can do some crazy shit. He joins immediately and they accept him with open arms, and after a few years, he blows them away with the Persistence of Memory.

But he's no Communist?
No, he's a Capitalist, he's a Fascist. But he sees this trend and just jumps on it, though after the World War, Surrealism is over. Dalí became a millionaire and had a big following through Peggy Guggenheim, who supported a bunch of Surrealists. So, anyway, maybe four or five people made it out of the whole thing, just like underground comics.

You hinted earlier—are you saying you wouldn't endorse someone's choice to become an artist?
If somebody's got talent, I would help in any way I could. Like Mr. Wash, I've been really helping him. But you don't want to just be leading someone down a bad path. Like Dalí, sometimes your stars line up. If Dalí would've come in earlier or later, he might be just another guy who could draw, and he'd end up being an illustrator. But he came at the right time, he was in Paris and saw the movement, so he skated with it.

We feel like we're in a good place, and you sure are, as well, especially with your upcoming show in Bellevue, Washington. What does it mean to you?
I feel like I'm still on a real successful trajectory. My art prices are stable, they're very stable, because I never went ape shit and made a bunch of lies and claimed things. I've always been very careful not try to be a big shot. I write introductions for people—it hurts to be turned down for an introduction. I guess I wish I could get that big flower position where I could get seduced by it. But I know the reality. I know my position is kind of like an arcane character... a notable arcane character.

Robert Williams: The Father of Exponential Imagination will be on view at Bellevue Art Museum from October 4, 2019–February 2, 2020.