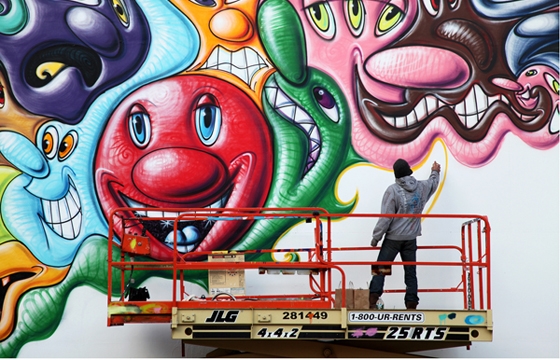 Our May cover artist, Kenny Scharf, was apparently arrested for what over the last 30 years he has become well-known for, spray painting. Apparently the artist was arrested in Bushwick, Brooklyn while painting one of his signature snakes and apparently as Art Sucks reports, while in custody cops were googling him and requesting autographs. "Cops who arrested me were fans and wanted to talk about exit through the gift shop and even liked the tag. At the first holding cell in Williamsburg (there were only 5 people in the cell) the police were googling me and asking about things like the tunnel nightclub." He continued on in saying “I was in there 30 years ago and im sorry to say its much worse now. Kind of like hell.”

Have you seen our newest issue with Kenny Scharf on the cover?

The actual Snake Scharf painted and was arrested for