Go Further: Artists Kyle Simon and Brian Weitz (AKA Geologist) on Their Project "The Sirens" 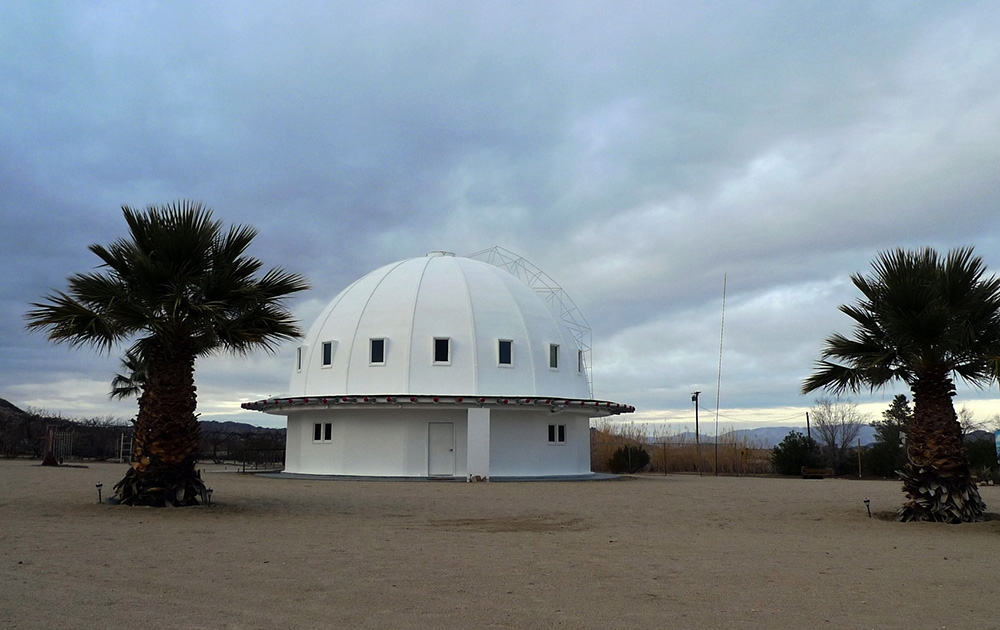 Whether intentionally or not, artists are always getting at some kind of deeper truth about the universe. In the case of artist Kyle Simon and his childhood-friend-and-coincidentally-Animal-Collective-co-founder Brian Weitz (AKA Geologist,) they are, literally, searching the universe for art. The project is called The Sirens, where Simon has built a custom telescope to convert light sent from the cosmos into audible frequencies, at which point Geologist will amplify and alter the sounds, filling and vibrating the room. This all takes place at the Integratron, a mysterious time-travel machine built by aviator and UFO-enthusiast George Van Tessel. To really learn some of the intricacies of this project, we asked Kyle and Brian a few questions to help illuminate the whole idea, but we may have left with more questions than when we came in...

Whether intentionally or not, artists are always getting at some kind of deeper truth about the universe. In the case of artist Kyle Simon and his childhood-friend-and-coincidentally-Animal-Collective-co-founder Brian Weitz (AKA Geologist,) they are, literally, searching the universe for art. The project is called The Sirens, where Simon has built a custom telescope to convert light sent from the cosmos into audible frequencies, at which point Geologist will amplify and alter the sounds, filling and vibrating the room. This all takes place at the Integratron, a mysterious time-travel machine built by aviator and UFO-enthusiast George Van Tessel. To really learn some of the intricacies of this project, we asked Kyle and Brian a few questions to help illuminate the whole idea, but we may have left with more questions than when we came in... 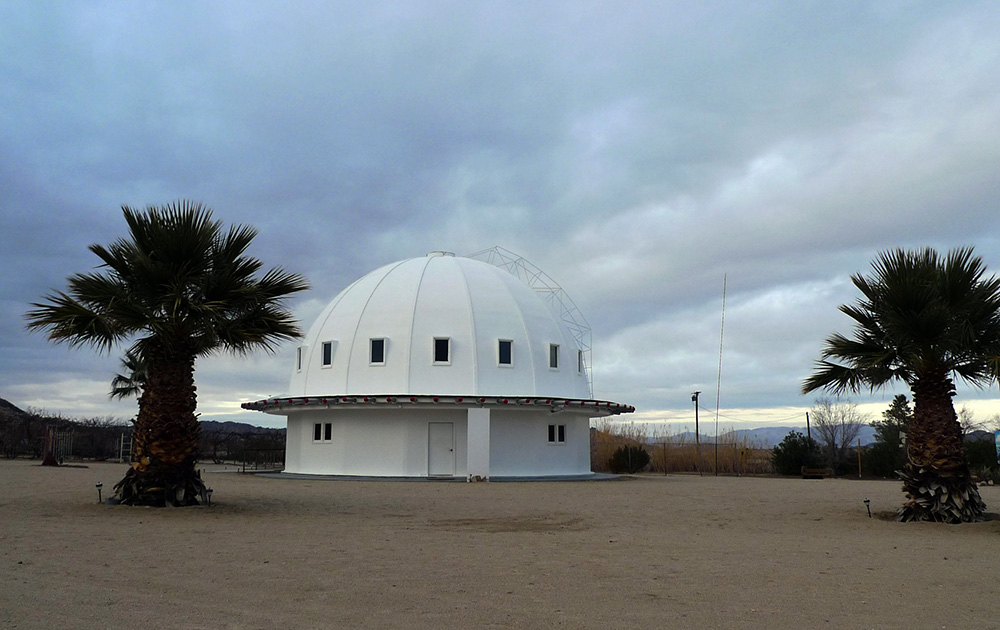 So, how did you two meet, how was this project born, and what were the early inspirations?
Kyle Simon: Brian and I met in Elementary School at our friend Scott’s birthday party. In middle school we started a band called Acid Cherry. It was really just a concept band; none of us actually played instruments at the time. Brian moved to Baltimore around high school so when we did get together, I would bring bootleg tapes of Jane’s Addiction shows, and Brian would play live Pavement recordings for me. Over the years we kept in touch and would send each other the weirdest stuff we were into. It went from Jane’s Addiction and Pavement to Sun City Girls and The Frogs, then to Terry Riley and Harry Partch. While Brian was studying marine biology at the bio dome in Arizona, he drove to visit me at the College of Santa Fe. He brought all these different transducer mics with him. We put them on everything and had a blast making the craziest sounds.

Both Brian and I are huge Carl Sagan fans, and I guess this project could be traced directly to him. When presented with the opportunity to do this project at a bigger scale than ever before, Brian was the first person I called.

Brian Weitz: Kyle pretty much nailed it with that one! Not much to add. We were both part of a small group of friends that played hockey in middle school, though we played at different rinks. Kyle played at an outdoor rink and I was too wimpy for that, so I went with a team that played inside. Kyle and our other friends at his rink got team jackets first and I was really jealous of them until ours came. 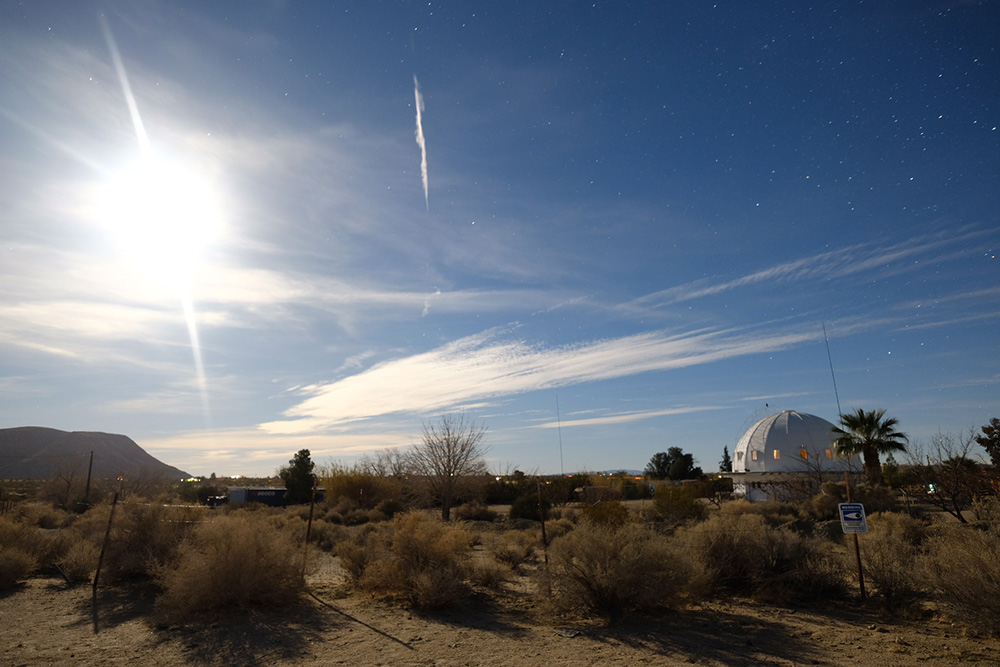 In what ways is this project the first of its kind for you? And first of it’s kind generally?
KS: First of all, this is the first time Brian and I are officially collaborating together, which is cool. The project itself is a breakthrough for me in that it’s the first time I’m working intricately with nature. If nature doesn’t cooperate, I have nothing. That is a very difficult part of this process: giving up control and letting the performance be guided by the sky on any particular night.

The methods I am using to translate the light from celestial objects are similar to that of spectroscopy and asteroseismology. Both methods are used in Astronomy to determine the characteristics (i.e. elemental makeup, internal structure, etc.) of distant stars and planets. I’m interested in transmitting that information in less scientific and more visceral ways to be felt by an audience, to physically vibrate that information into them.

The Integratron was built by George Van Tassel with exact specifications for time travel, based on a formula supposedly given by a visitor from Venus. The Sirens is built according to his original theory, that the energy from a distant star or planet would vibrate the entire building. This then, would tune participants’ brains to a particular frequency. As far as I know, nothing like this has ever been attempted. 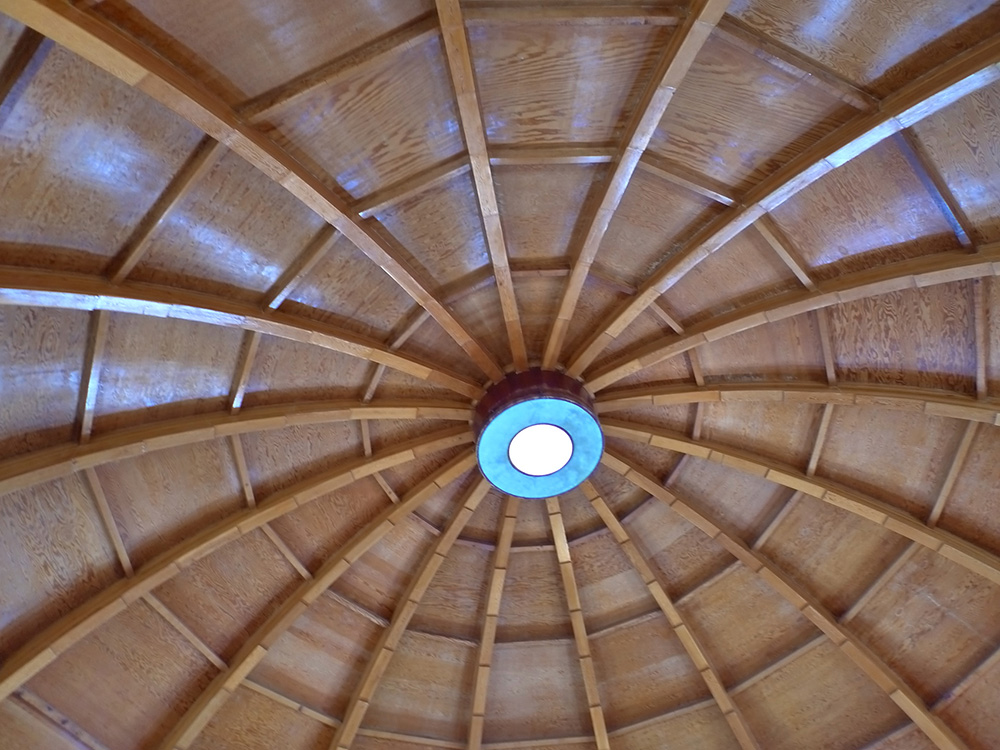 BW: I’ve used sounds and concepts from nature in Animal Collective’s music a lot, but rarely from space. I’m mainly focused on the oceans when it comes to those ideas because I did have a science background in that. Space only came into my parts once when we were recording the song “My Girls,” a friend sent me a recording of frequencies from the Cassini satellite of Saturn’s rings. They sounded musical to our ears so we included them in the song’s intro. I’m hoping this project with have some profound effect on me in terms of looking more outward.

Funnily enough, part of my old job included advocated for increased ocean exploration funding and one of my main arguments was contrasting the amount we know about the ocean with what we know of space. We spend more money in one year on space exploration than we have in decades of ocean exploration. We know more about the surface of the moon than the deepest parts of our oceans. Only 5% of the ocean floor is explored. When you consider that is the majority of Earth’s surface area, we know almost nothing about the majority of our home planet. At least those things were true when I did that job over 10 years ago. So, for a while, I adopted an anti-space attitude. In the face of environmental threats to our home here on Earth, I thought more focus should be on that than the cosmos. Now, I feel things are a bit more connected, and the spirit of exploring all unknowns wherever they may be is a universal drive that unites us all. Engaging with this project is a way of doing that for myself.

What’s the highest goal you want to achieve with this project? Or is it more something organic and natural that you want to go in whatever direction?
KS: Haha…well…I guess the highest goal would be to actually achieve time travel, and establish communications with extra terrestrials. Say what you will about George Van Tassel, but he was a brilliant engineer who believed in his ideas with great conviction, and spent his life pursuing those goals. The Sirens undergoes drastic changes every time I do a presentation. I always see how certain elements could work better, and I tweak, or completely alter the telescopes and equipment in order to achieve different, or better results. Naturally the project will grow and evolve, but sometimes I feel like Prometheus trying to wrestle fire out of the sky.

BW: I think, for me, the latter part of the question; at least in terms of the sound. I have no set ideas of what this performance will sound lik,e or feel like. One of the appealing things is that it’ll be more like flowing with the current than implementing my own structure. On a communal level, I hope that there will be a shared energy we all feel in the room. I’ve lived in the desert before and there really is nothing like the shared experience of staring at the sky together. 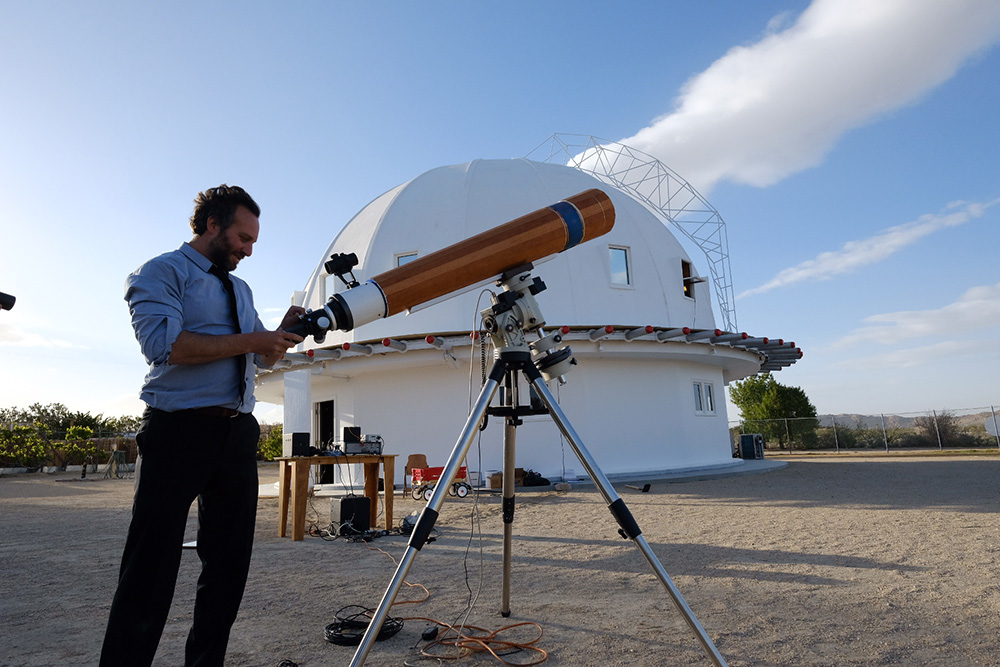 What does the musical component sound like? Is it comparable to something else you can describe?
BW: I won’t actually hear the incoming signals until I’m out in Joshua Tree that week. I thought about asking for recordings in advance, but I want to be as present as possible and react to the energy of the moment, rather than be worried about executing a specific pre-conceived idea from a different time and place. I’ll be bringing a modular synthesizer system I use for most Animal Collective and Geologist projects these days, which has a sampler module. I may load up some samples and see if in addition to actually processing the audio signal from the telescope, I can also use it as control voltage to play the sampler as well.

KS: Again, this is the first time that Geologist and I will collaborate on this project so I am very excited to hear how he will interpret the incoming signals! In general the sounds have a range. They can be jarring, annoying, eerie, and sometimes really beautiful. Some moments are like a hidden symphony, sent down from the heavens. They most definitely have a Sci-Fi feel to them. They are most like binaural beats, stretches of continuous tones with subtle changes. In this sense they are able to sympathetically vibrate the brain.

I think the longer you can spend absorbed in the sounds, the more you will take away. It’s almost like having to learn a new language. The first time you hear it, it sounds like gibberish. But with multiple listenings, I do believe a dialogue starts to emerge. I live way out in the middle of nowhere, in Joshua Tree, CA with very little around me. I’ve spent the better part of 2 years sitting outside every night, blasting myself with the sounds of the moon, the planets, and the stars. I think it is through continuous obsessive observations like this that real revelations can occur. 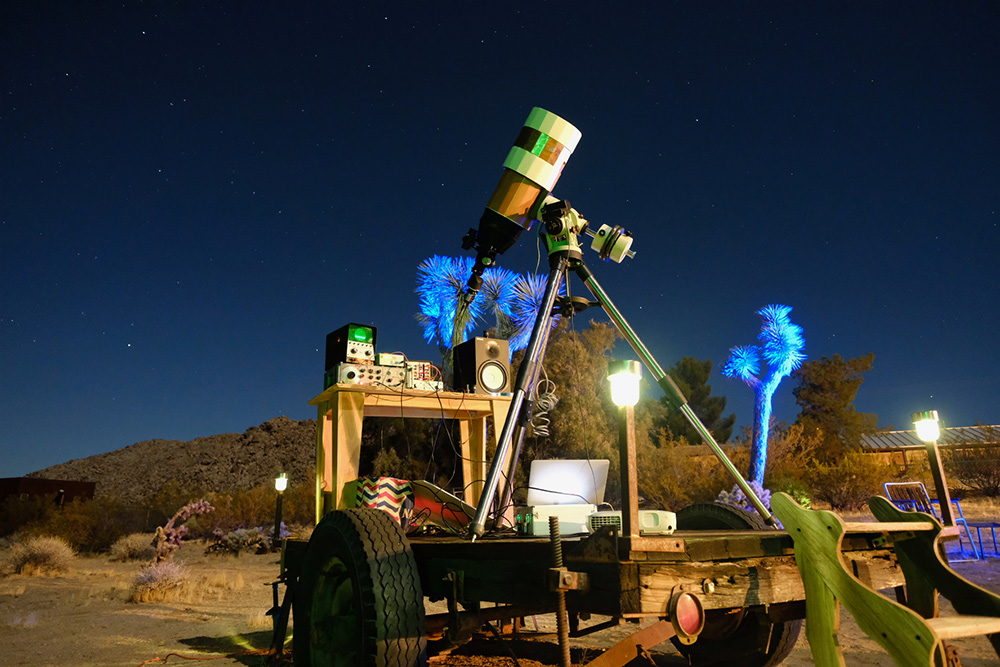 Some of the set up

Do you think art is something that transcends human appreciation? Do you feel like this project, or your work in general, gets at something bigger than humanity?
KS: I think some art can! To me, the constituents of art, be it light, color, or sound, are all comprised of frequencies. Frequencies are the language of the universe. I believe that frequencies of Earth are constantly radiating out into space. So yes, I feel comfortable in saying that the vibratory effects of art impact everything, beyond just humans. As I get more involved in this project and peer further out, I feel a longing to connect with the universe at large. I believe whole heartedly that life exists beyond Earth, and I think once we actually start to visit some of these places we will see a wide variety of living organisms that we could never have dreamed of. I would like very much to be a part of that connection, sending positive intentions out into the unknown.

BW: Once again, I got nothing on Kyle here. Perfectly said and I agree 100%. 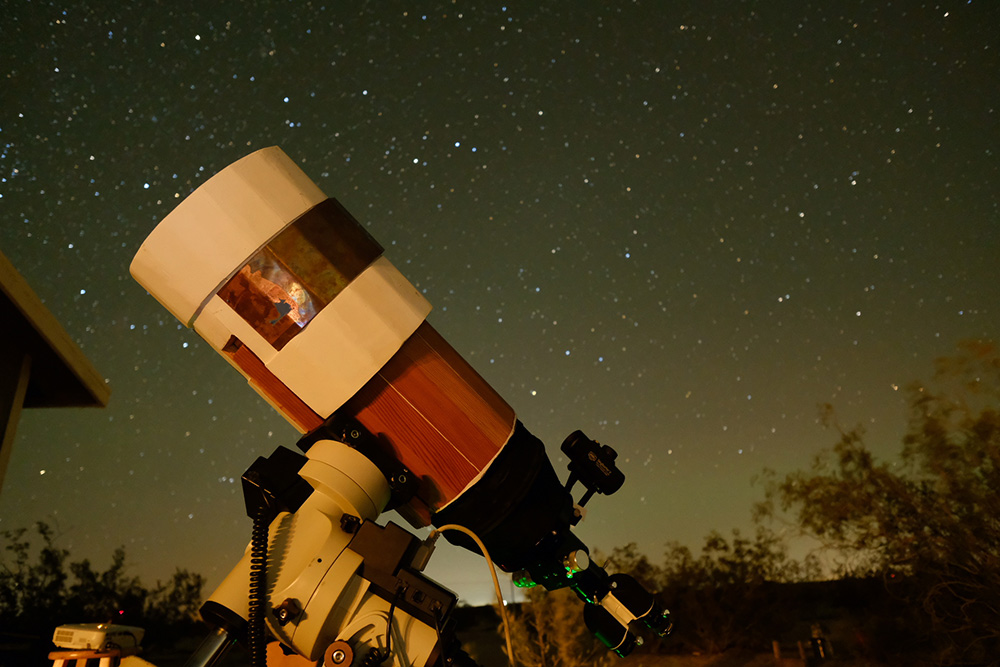 What kinds of ideas do you have for other projects in the future?
BW: I’m a guest pilot on Kyle’s ship right now, so I don’t have anything specific planned. I’ll be taking it all in that week and see where it leads me.

KS: Well, if all goes as planned I may soon be undertaking more ambitious explorations of the sky. I am currently working on larger telescopes that interpret information in different and unique ways. Once you enter the realm of Astronomy and telescopes, the path is laid out clear: go further, go further, go further.

Damn, we feel small... Thanks for chatting with us Kyle and Brian!