How much of you is defined by national identity? History informs our components, but when do we cross the line from self knowledge to fanaticism? Take a walk down the Falls and Shankill roads in Northern Ireland's capital city, Belfast, and you'll hear the walls talking in these working class communities. Political murals, painted by Unionists or Loyalists wanting to remain in Britain, and Nationalists or Republicans wanting to unify with the rest of Ireland are drawn in a lively debate, exacerbated by religious divide. Generally, Unionists are Protestant and Nationalists are Catholic, a societal schism that has caused open conflict resulting in the deaths of over 3500 people until the 1998 peace agreement, which may have reduced the bloodshed in Northern Ireland, but did not stop the proliferation of painting, a practice the Unionists started in 1908 and the Republicans adopted in 1981. Many tourists come to Belfast, fascinated by this "dark history," known colloquially as "the Troubles." Tour guides, many of them having been active participants in the conflict, are happy to show visitors around Belfast's political murals and recount stories from their country’s violent history.

Arts and events manager Adam Turkington takes a dimmer view of the atmosphere such murals cast over Belfast. "As one person stuck in this city… If the one thing I can do is to provide a counter-narrative and show people that actually putting these things on the walls has a real impact on people’s quality of life... When you wake up every day and you see a dude with a balaclava when you open your curtain windows, like… That’s not good for your mental health." Turkington is responsible for organizing a street art festival called Hit The North which transformed the mural scene in Belfast's Cathedral Quarter. Take a stroll through that area and you will encounter an abundance of fresh and vibrant modern murals. "What drives me creatively is a desire to give the people who don’t align themselves with either of those tribes something to cling onto in terms of a sense of place and identity."

Inspired by punk music and hip hop culture, a new generation of street artists such as KVLR and DMC began to paint a new path. "People were doing something a little bit differently and coming together," KVLR explains. "It didn’t really matter what side of the fence you were on. To me, that felt a lot stronger than being one or the other." It is easy to find mystique and allure in Belfast's 'dark history', but these contemporary creatives, determined to make something new, positive and different from what has come before, call out for attention too, and they have plenty to say. They choose to build communities and bring people together rather than promote division and despair. It was my pleasure to try and tell these positive stories as part of my new independent documentary, Full Colour, which focuses on the Irish street art communities of Belfast and Dublin, available on YouTube now at this link. If these walls are talking, who's telling them what to say? Watch Full Colour to find out.  —Harry Moylan 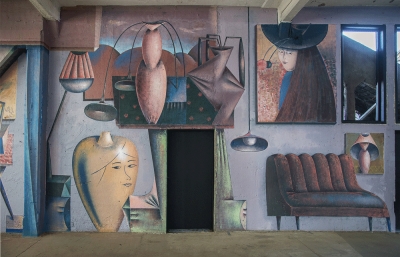 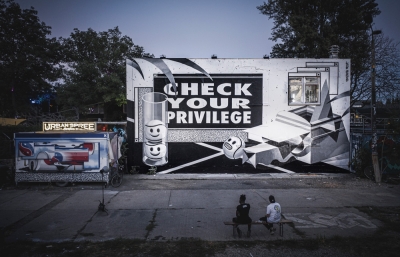