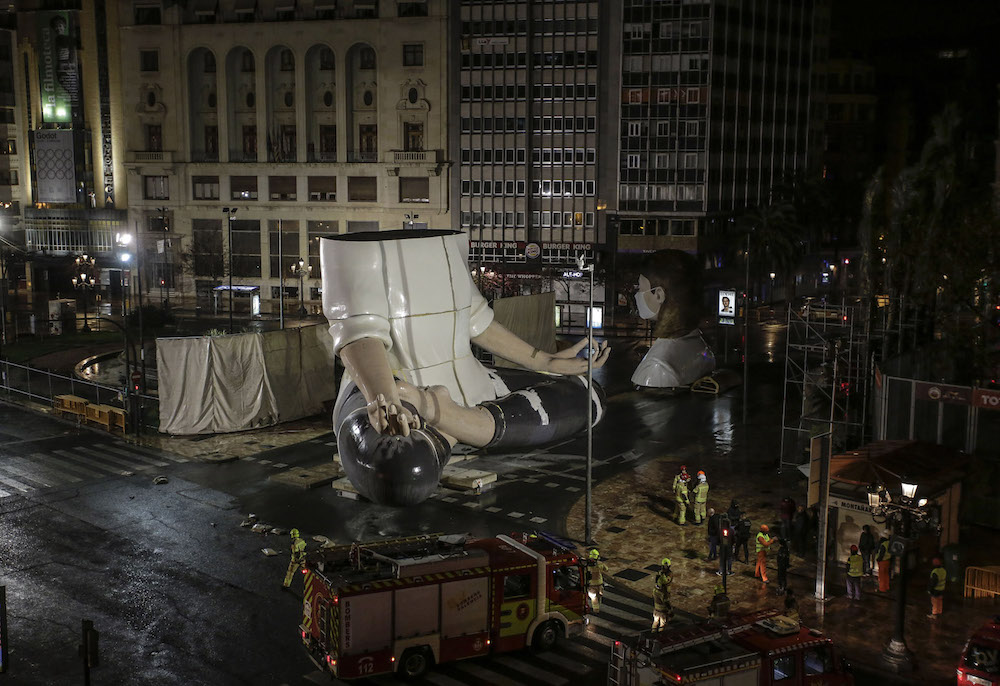 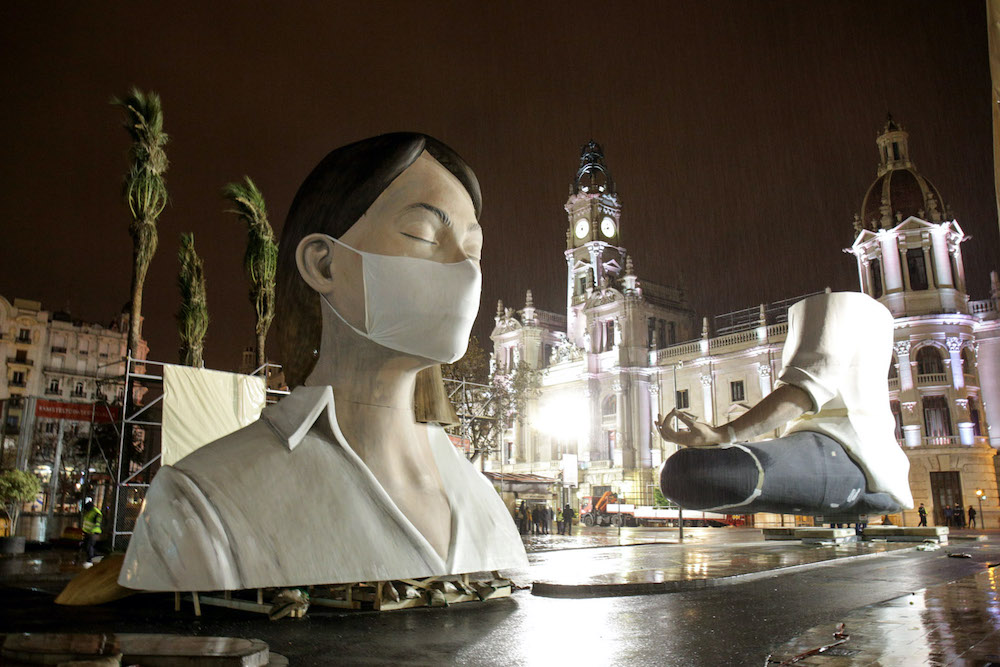 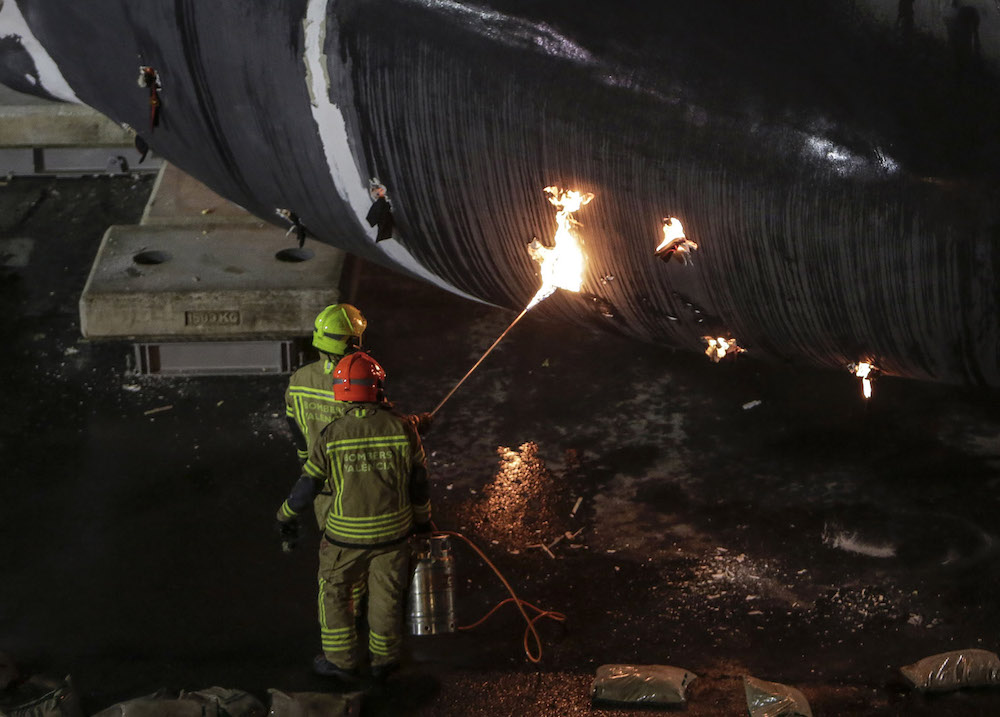 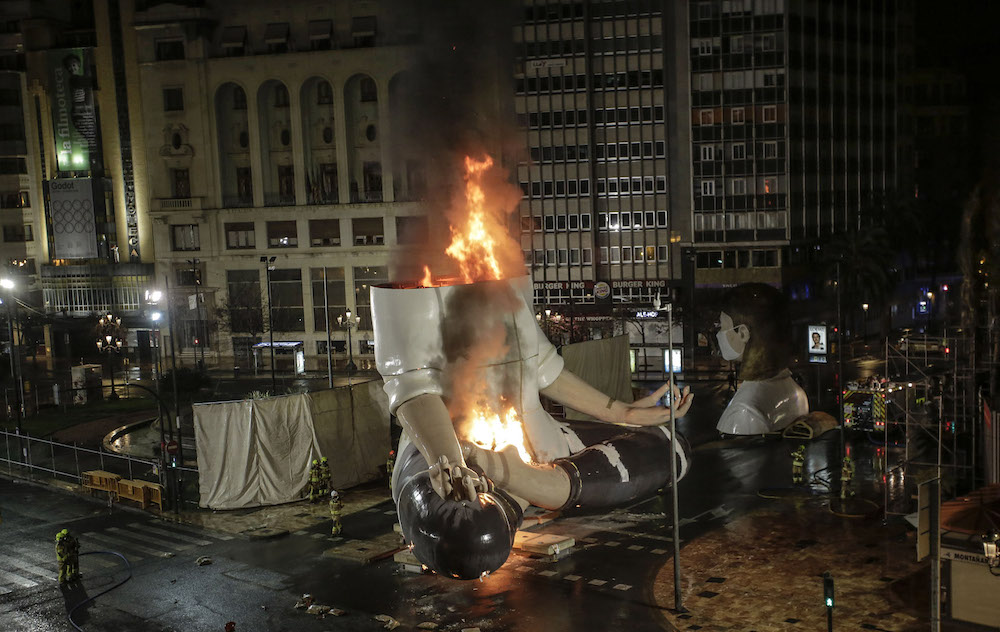 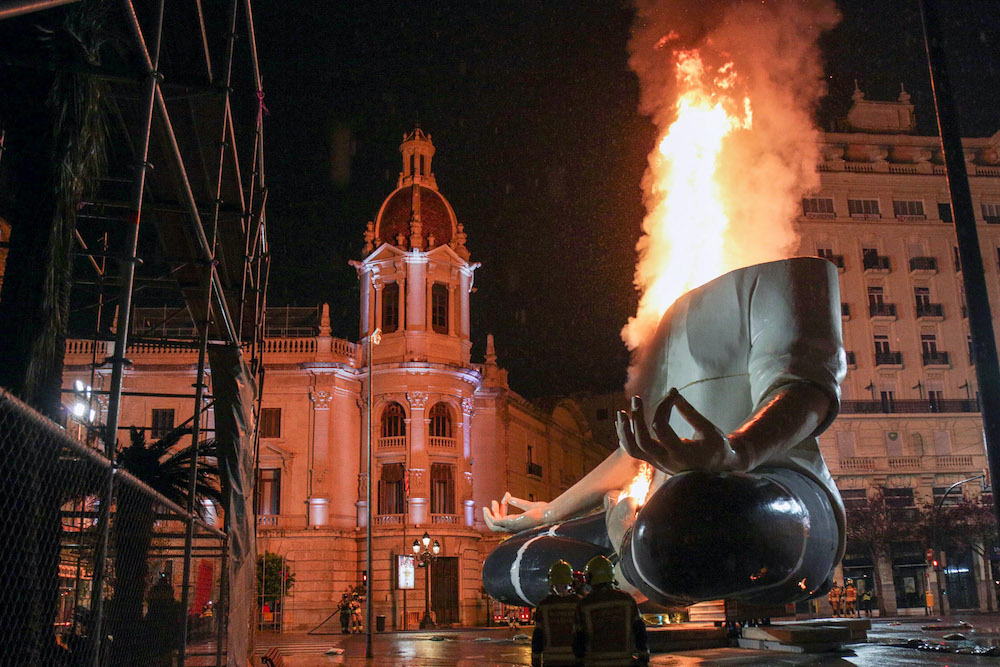 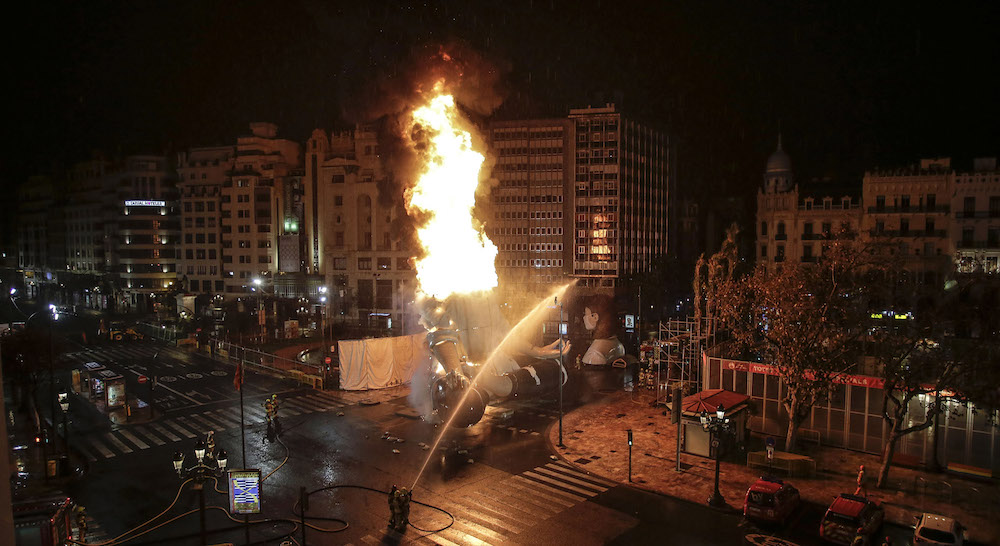 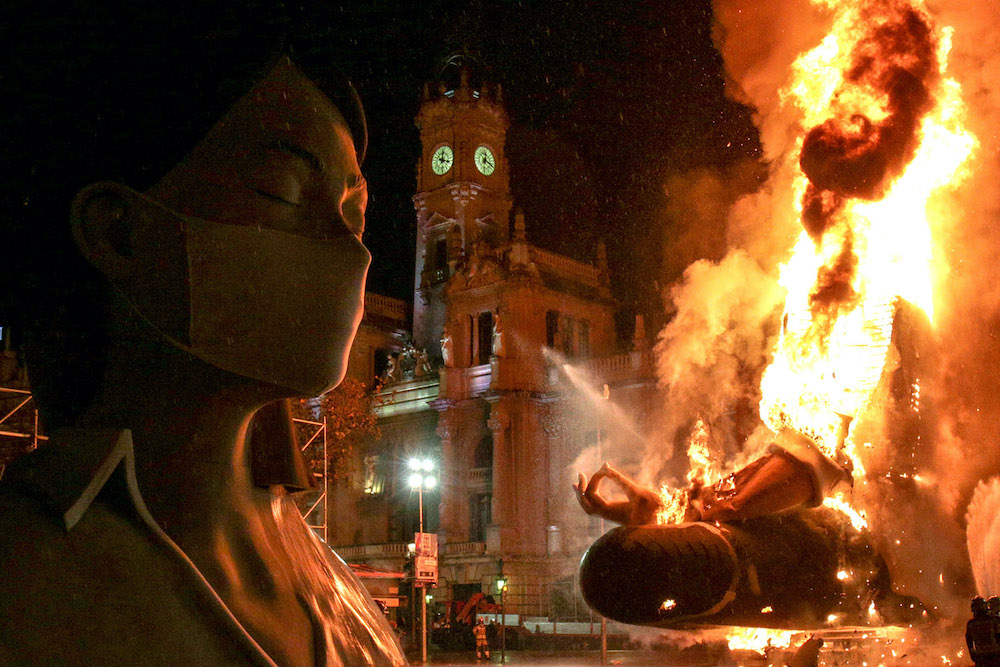 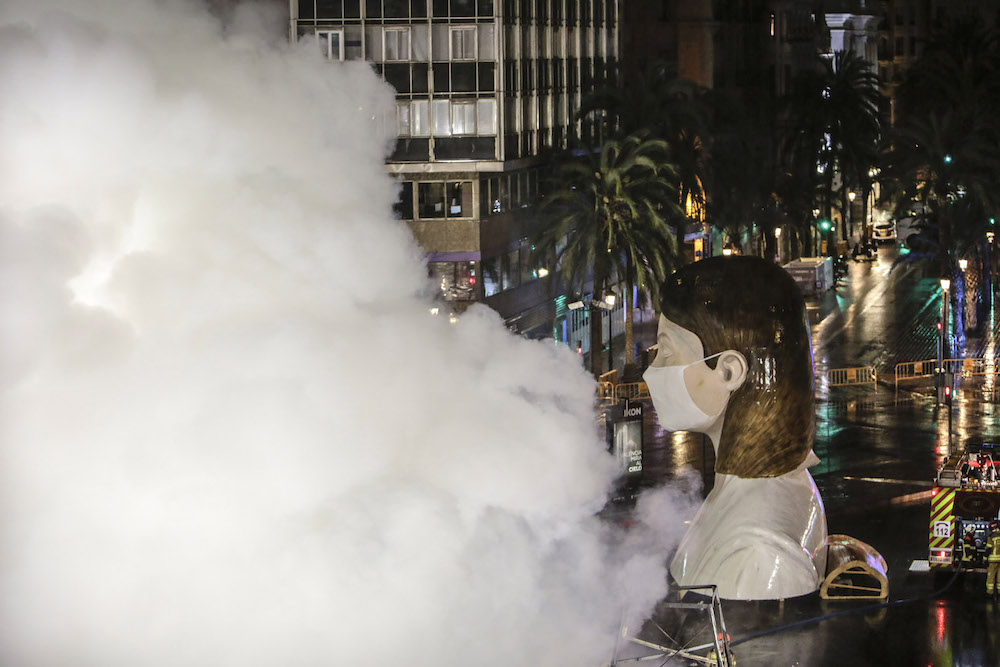 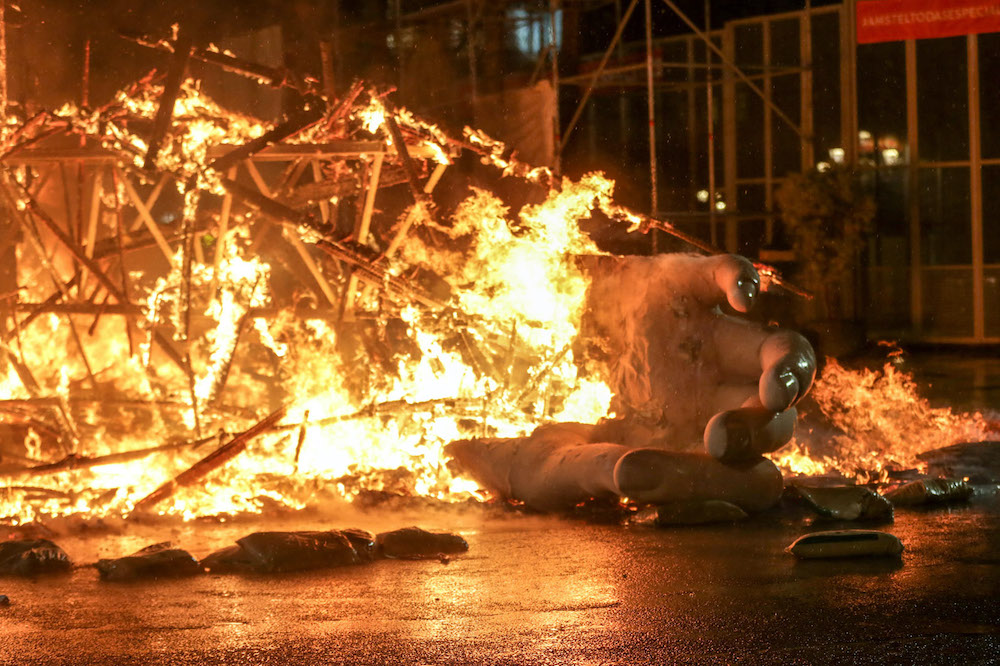 We recently wrote about the project that our friend Escif has been working on for the public festival, Les Fallas, in his hometown of Valencia. The project was to be a milestone for the artist: a roughly 60-foot tall wooden sculpture of a woman in meditation pose to be the centerpiece of this year's festivities that is famous for taking over the whole city with celebration and music. As Spain went into a shelter in place lockdown, the annual event got canceled. For Escif, the work's destiny became uncertain, and after he added a big surgical mask to its face, the monumental sculpture became a symbol of peace and calm, unity and solidarity.

The peak of Fallas celebrations was supposed to take place today, March 19th, when traditionally over 400 Fallas through the city are burnt as huge bonfires. This tradition goes back all the way to the Middle Ages, when artisans celebrated the spring equinox by disposing and burning the broken artifacts and pieces of wood they saved during the winter. Over time, this tradition grew, following the socio-political evolutions and eventually became what it is today: a combination and juxtaposition of critical, obscene and satirical sculptures being built around Valencia.

Throughout its long and rich history, the Fallas has been suspended only six times, including this year's celebration. In an act that could be seen as symbol of resistance against the new virus and to keep tradition alive, the Valencian government made the decision this week to continue with the plans (albeit with no public around) and make a huge bonfire in the main square. Under a close eye of the artist and a handful of firemen instead of tens of thousands of expected spectators, the body of the sculpture was burned. The city and artist have decided to keep the face portion of the sculpture, with the mask, in the city square until this crisis ends. —Sasha Bogojev 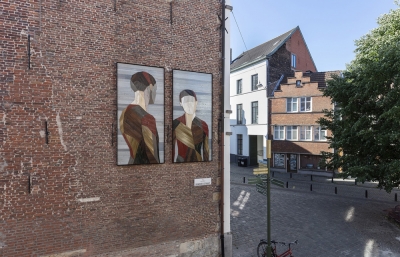 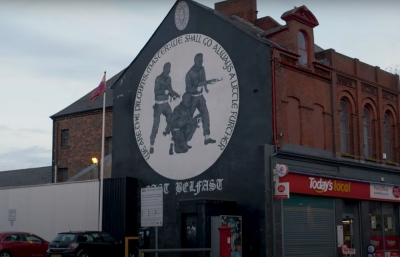