Laugh Now: An Essay on People Power in the Stencil 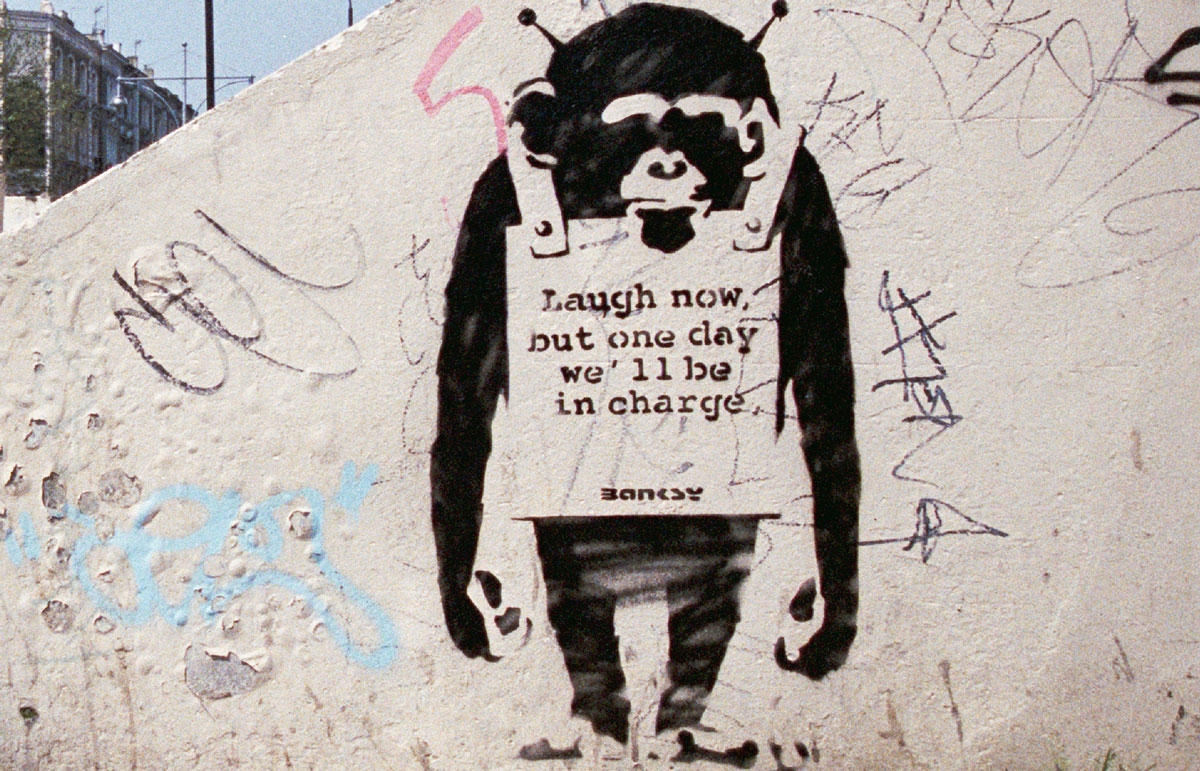 “Please don’t mention that I’m a street artist, I’m a neo-muralist,” so implored an artist with whom I was recently working in spite of my knowing that he’d spent the last ten years nurturing and living off a culture that was almost the antithesis of this current shift to the municipally sanctioned and corporate mural trend. Now, I’m not against muralism as such. It’s a powerful medium with a rich history, particularly in the Americas, with often strong associations to social justice issues and community building, though now communities currently being built tend to integrate a type of generic muralism into their new build projects. 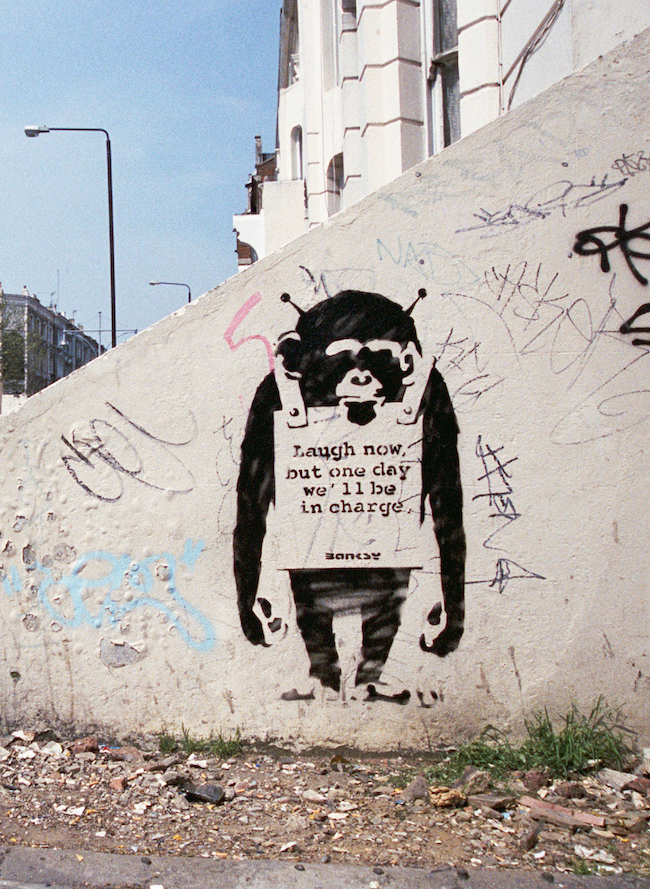 Such add-on artists, complicit with the unashamed abandonment of street art’s original rhetoric of transgressive spontaneity, premeditated with developers in a kind of faux subversion. But if they still put art on the streets for people to hashtag and enjoy, what’s the problem, you might ask?

The problem is, of course, the same one that street art initially set out to challenge. Such mechanisms and conduits to power within public space, so, by default, public art, desire an ever-more passive audience primed to consume #muralart in the same manner they consume advertising and product.

In a culture of globalised brands and neo-liberal ideology, this one-size fits-all style of public mural art is ideal for clone developments and gentrification projects. Middle of the road, middle class and middle-brow, it is fast becoming the Mumford and Sons of street art, creating a culture that seeks nothing more than your uncritical compliance.

All of this got me thinking—what can be done to wrestle back “street art” from corporate property speculators and those organisations dedicated to profiting, parasitically, from a culture predicated on transgression and resistance to this onslaught of capital and video projector-assisted art. Can this coming tsunami of big budget bucket paint and cherry picker productions be averted, and if not, what should all of those concerned do?

Authentic street art’s impending demise, or at least its dilution, recalls the first piece of street art, that first stencil, that hit me with an impact like no mural ever has. Like a song, it contained the power to make you want to leave your small town and small life for better things. It sparked both art and activism in eyes tired from an advertising assault I had experienced on the taxi ride from the airport to central London where I was to DJ. Lugging my record box (yes, vinyl) from the back of the cab, I was confronted with a slightly less than life-size, single-layer stencil of a chimpanzee holding a sandwich board boldly stating, “Laugh now, but one day we’ll be in charge.” Appearing at a time when transgression was not simply a marketing technique, its immediate cultural value far exceeded any possible commercial value. There were no street level stencil art marketing campaigns, so it was undoubtedly art. But what sort of art was this? Who had created it, was it animal rights related, was I the monkey, was it public art, did it relate to graffiti?

Stripped of these references, it left me momentarily lost. Like all good art, it pushed me down a rabbit hole to live for a moment in a different world. A world away from the city, my dislocated self and the information overload I’d just experienced. It was 2001, and it was, of course, Banksy’s Laugh Now.

This wild counterpoint to the regulated distribution of images and signs in a public space triggered a lifelong obsession with street art, which has, in its authenticity, never lost the power of that first defiant punch, a punch that instantly knocked the art education out of me. It acted as a trigger not only to thought, but to action, and that same year, I established the Nuart Festival. 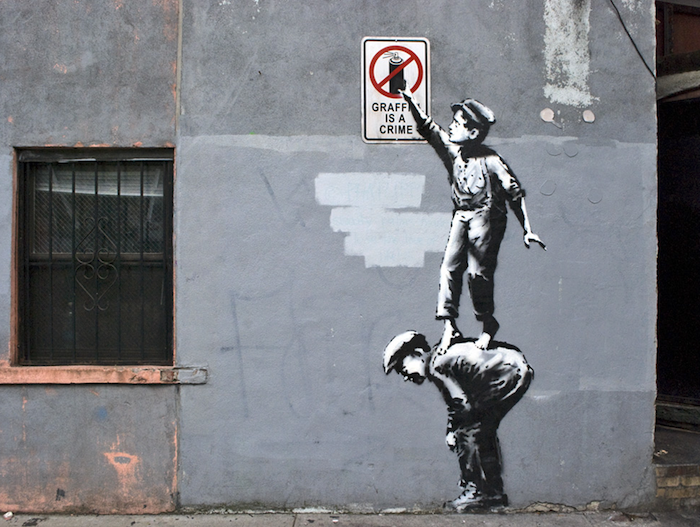 (banksy, above and top of page, courtesy of Banksy)

Stencil art is the tool the powerless already possess. It enables speech in the language of the times, leaving traces of the familiar in unfamiliar surroundings. Unlike contemporary art, I realized it was not a mirror, but a compass to show the way, not produced for a community, but a shout-out to create a community. Some mural artists, often through necessity, have to be coaxed in the way they communicate politics, but I’m tired of nuance. There are people, companies and organizations out there quite prepared to use mural artists as the shock troops of gentrification, bulldozing an area and clearing a path for developers, mine stripping the culture as it goes. We need to be prepared to offer and fight for alternative platforms, patrons, finance and events if the culture is to maintain any authentic link to its radical roots. In the meantime, let’s celebrate the anonymous and unsung heroes of stencil art, those nameless champions of unsanctioned human scale works whose rebellions challenge the corporate world.

In a culture where anti-authoritarianism can be “diagnosed” and medicated against as a disorder, one where contemporary art is in thrall to the market, we need quick, simple and very public transgressive acts. The stencil offers a form that echoes Joseph Beuys famous statement, “Everyone is an artist,” in the most literal sense.

In the beginning, you’ll feel like a fraud, a faker, and you can damn well bet you’ll be inauthentic. But continue, and somewhere along the line, you just may create an incantation that reverberates and triggers action. Believe in the idea of art, love and community.

As critic and author Robert Hughes asked in the 1980s in The Shock of the New: "What does one prefer? An art that struggles to change the social contract but fails? Or one that seeks to please and amuse and succeeds?" I leave it to readers to decide which is which. Laugh now, but one day we’ll be in charge. —Martyn Reed

Martyn Reed is the founder of the seminal annual street art festival, Nuart, which takes place in Stavanger, Norway. He also started Nuart Aberdeen in 2017.