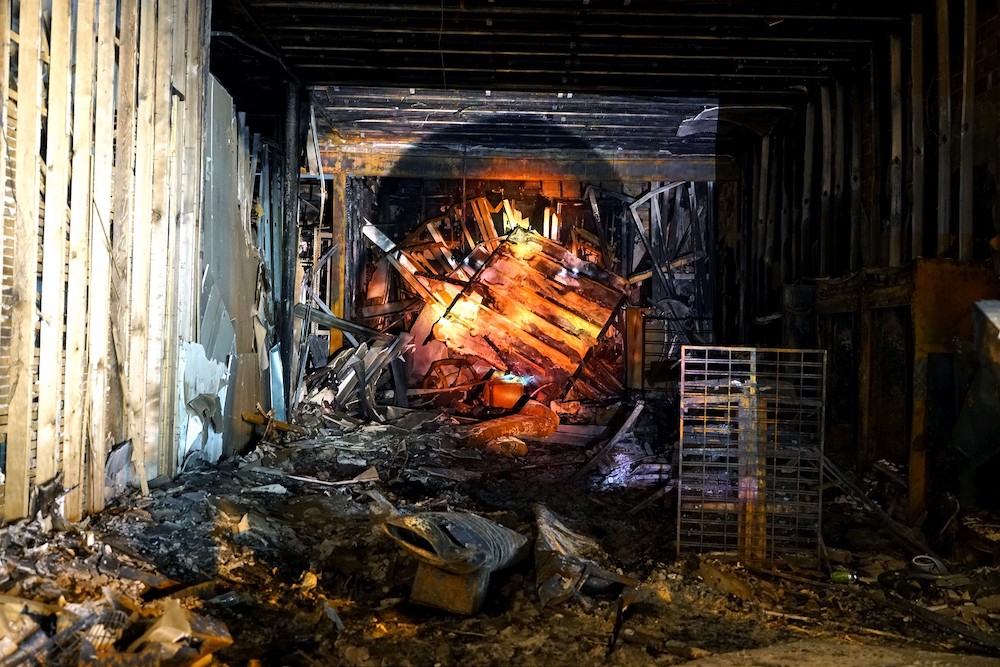 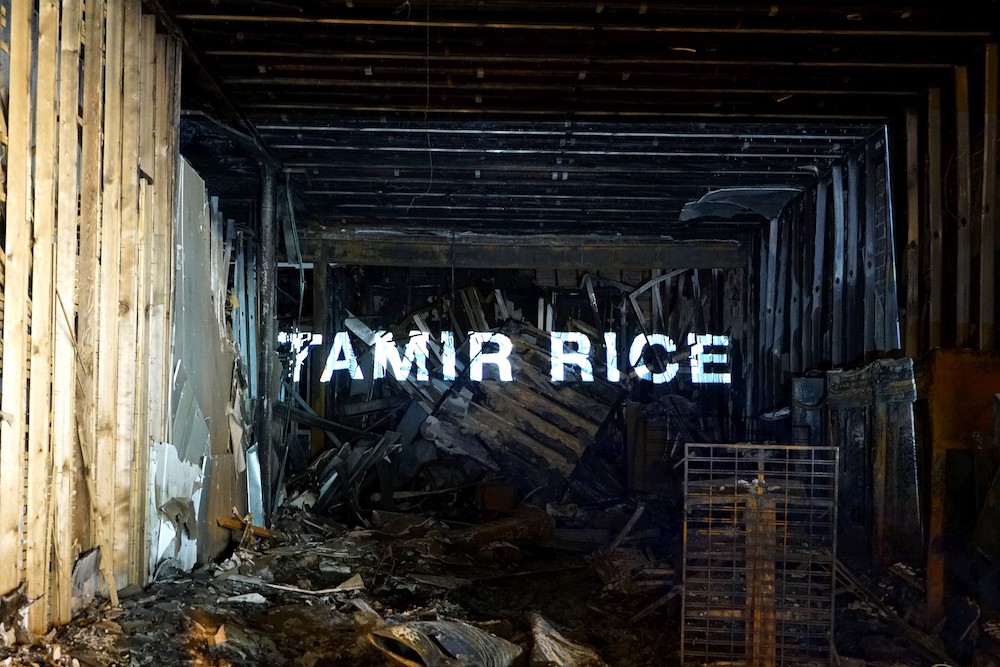 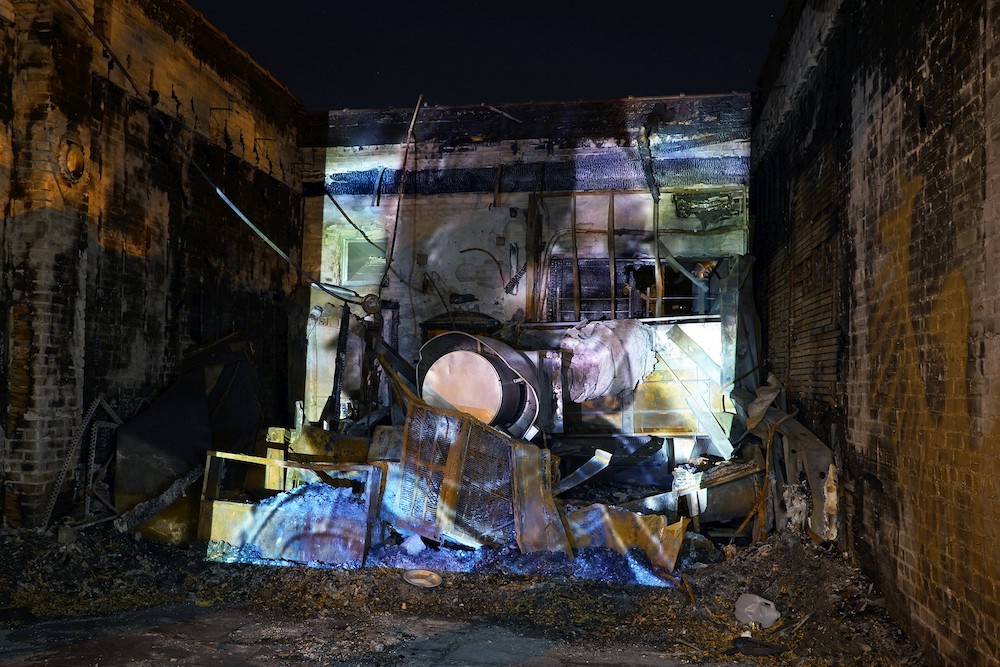 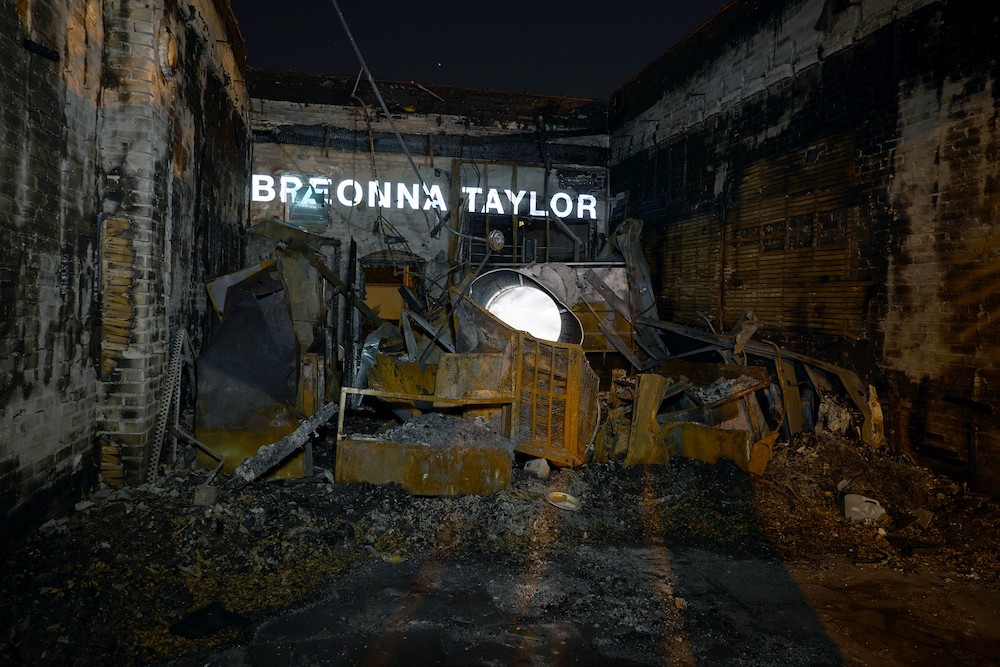 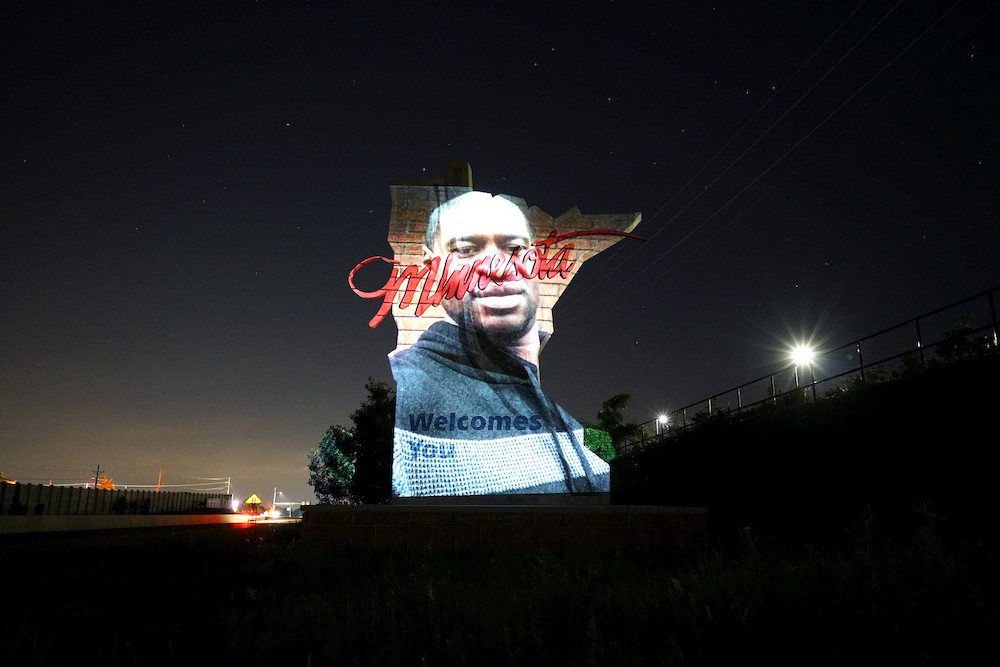 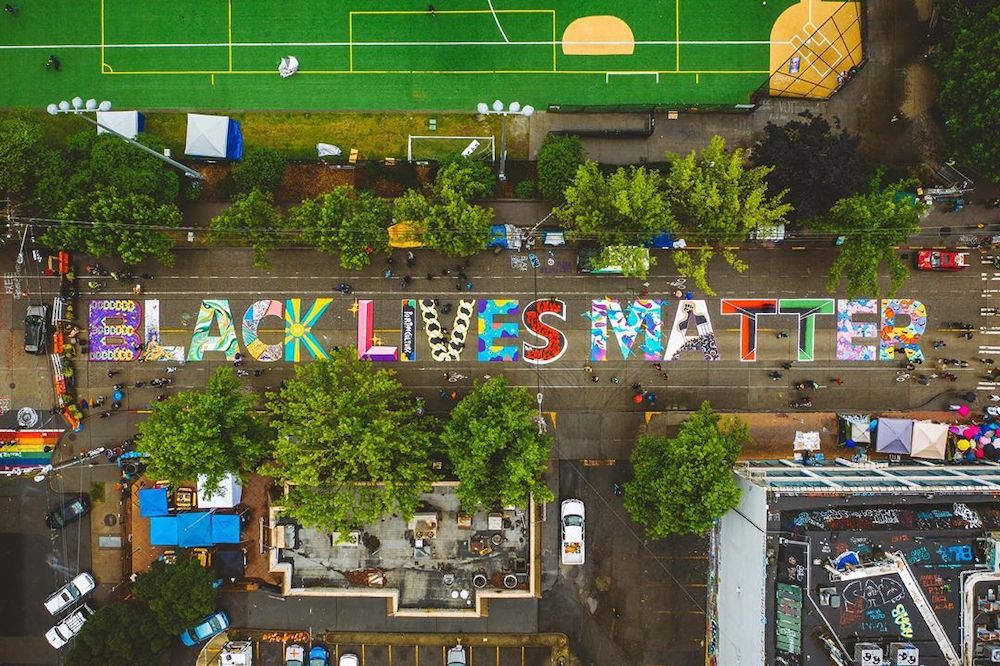 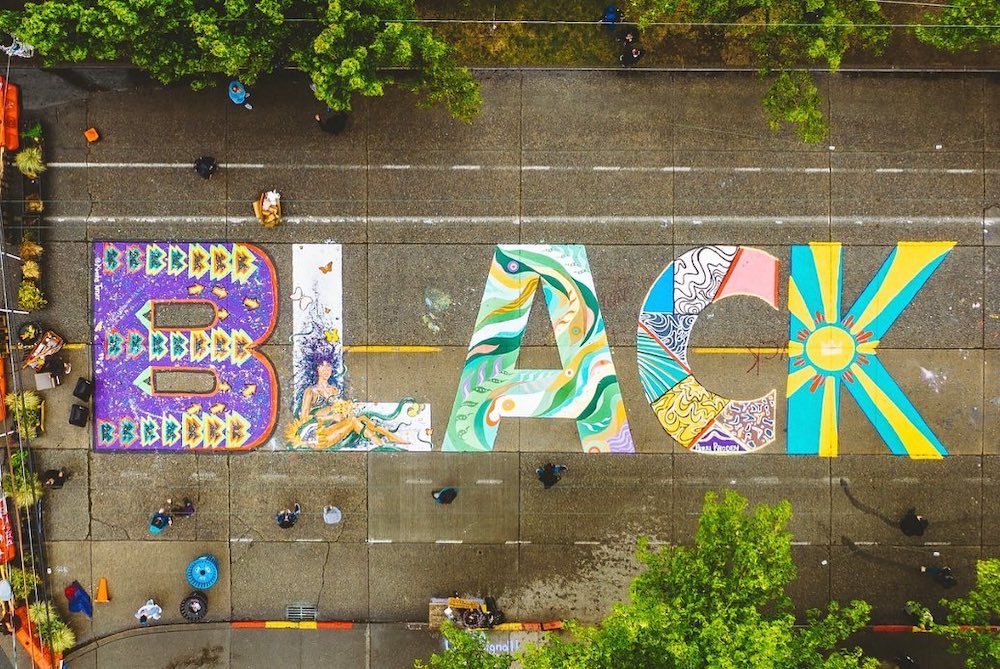 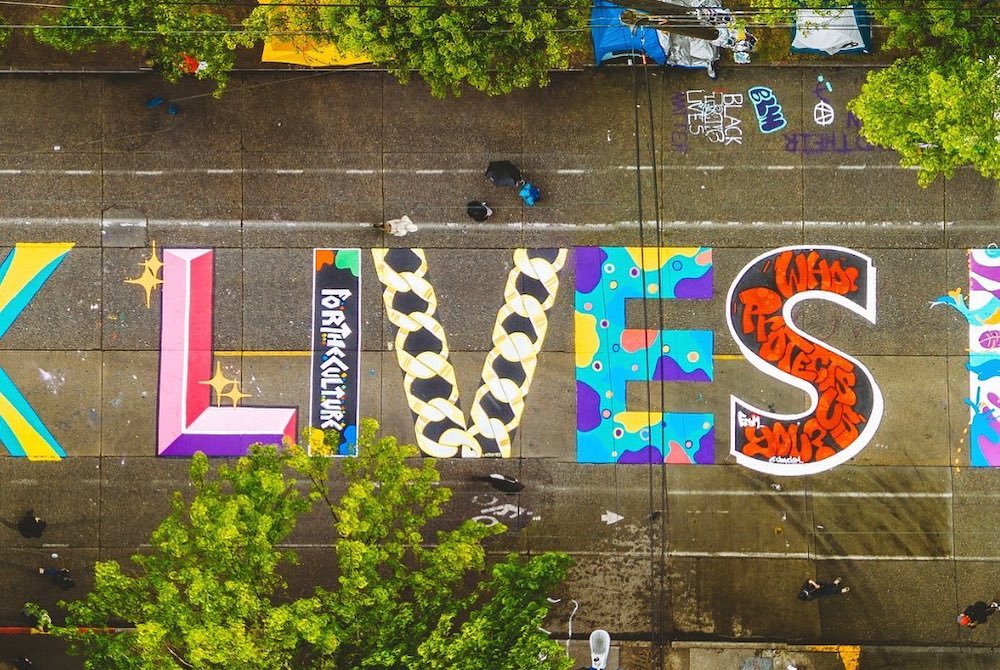 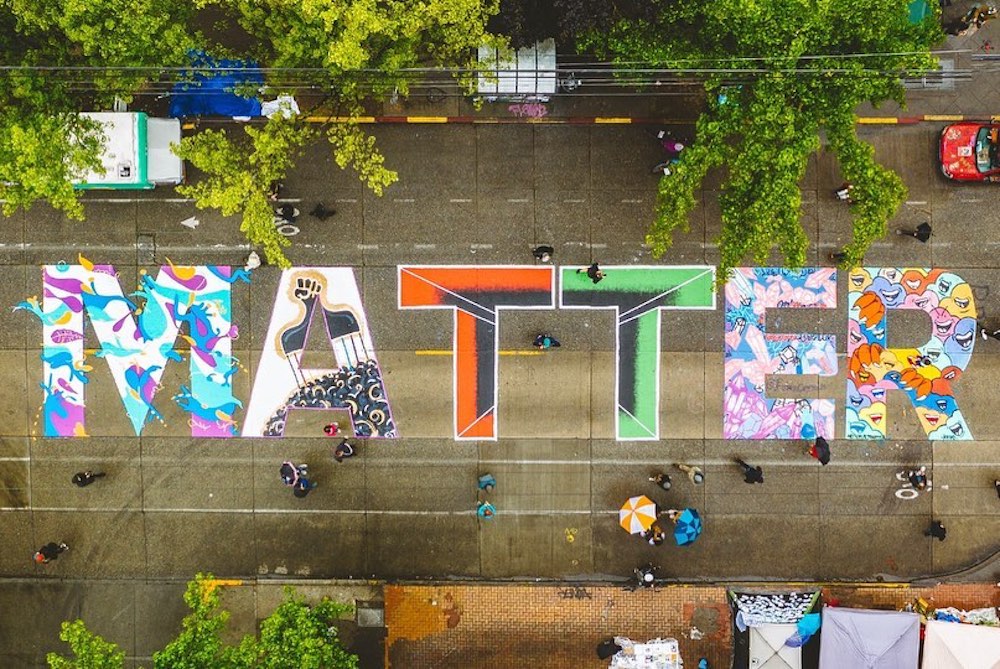 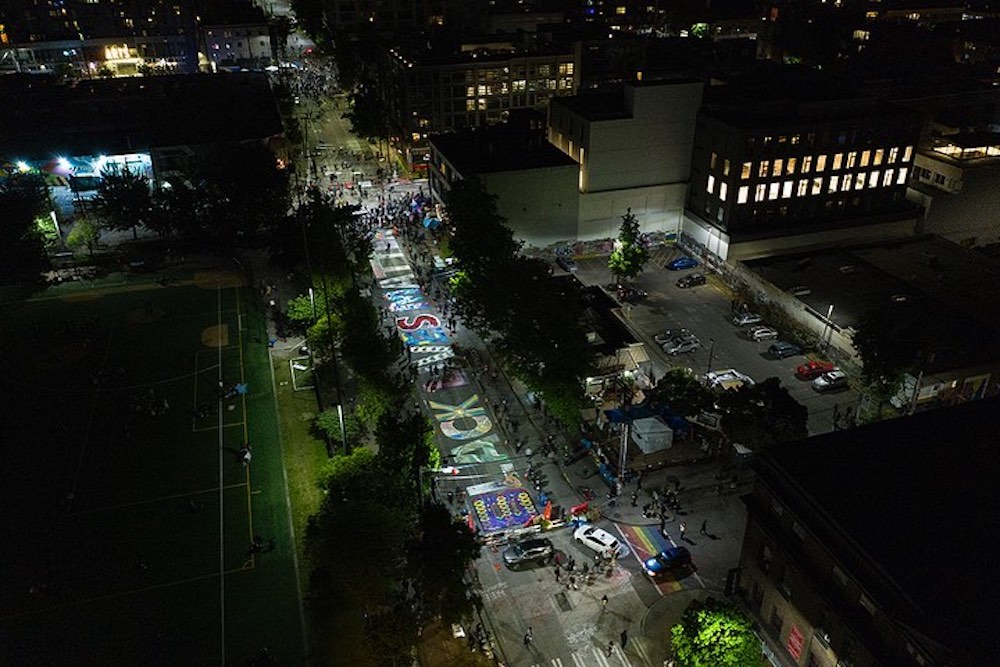 As consciousness grows and circumstances dictate the cries for societal change, the cries proclaiming that Black Lives Matter ring throughout the world. From raising funds with charity exhibitions or individual auctions via Instagram to the realization of large public art projects, we're witnessing the strength and wide-reaching power of art once again. Among many initiatives we've seen being shared and supported in recent days, these two efforts have got our attention and we felt are worth sharing further.

I’m pretty sure both @czt and I were crying during the making of this projection. I’ve decided NOT to share my latest projections but instead give that power to YOU! If you would like to see the rest of my projection series just send me a DM. All I ask is that you share them in return to help bring awareness to the pain & suffering so many people of color (myself included) face everyday. Thank you so much and I hope to hear from you. #georgefloyd #breonnataylor #tamirrice

First is a project coordinated by our Minnesota-based friend Eric Rieger aka HotTea, who organized a series of projections on the streets of Minneapolis, home of George Floyd. The installation artist explains how, “The concept for these projections was to take the images and names of those killed by excessive police force and project them onto surfaces that either seem obviously pleasant or obviously destructive. I chose to project George Floyd’s portrait onto the 'Welcome to Minnesota' sculpture because of its message. The phrase 'Welcome to Minnesota' does not mean the same thing for everybody. For black people and people of color, it has often meant unfair treatment by the police and discrimination in many aspects of life. Minnesota is known for its lakes, trees and many biking trails, but not all of us are so fortunate to enjoy the boat life or that pleasant walk around Lake Calhoun. So many lives have been lost to excessive police force, and this image is meant to make us think, 'are we being genuine, are we being kind?' For many of us the answer is YES, but for a lot of people that answer is NO. Behind the smile and relaxing lake lifestyle are police who mean to cause harm when given the opportunity. When moving to a state like Minnesota, we should all be welcomed and treated fairly no matter the color of our skin.

"The images of Breonna Taylor and Tamir Rice are projected onto buildings that fell victim to the riots here in Minneapolis. There were many signs of hate groups being involved in the riots and it’s painful to see history repeat itself like this. Some of the buildings that were burned meant a great deal to the community, just as the people killed by police meant. The building itself may be gone but the idea and the people that inhabit that space are still here. Breonna and Tamir may be gone, but the spirit and their memory lives on. To project their image and their names onto a damaged building represents an idea, an idea that these lives should not be gone in vain, and nor should the building. Breonna and Tamir are guiding us, to help us fight for what we know is right - and that is equality. Their images represent light in a very dark space. They will help guide us to where it is safe, a place in which we do not have to live in fear from people who are sworn to protect us."

Amazing to see so many artists come together in a positive way to paint one important message. This fight is not over and won’t be for a long time. Listen , learn and educate yourselves to help make a change .. SUPPORT these artists in your community! B: @kimishaturner L: @perrypaints A: @onesevennine C: @thecurlynugget K: @thesoufender L: @tooth_taker and @drakesignanddesign I: @stattheartist V: @aohamer E: @barryjohnson.co S: @snekeism M: @moses_sun and more A: @artbreakerbt TT: @tdubcustoms E: @future_crystals R: @thekingafroshow #BLACKLIVESMATTER [email protected]

#blacklivesmatter | An amazing group of artists came together to paint a block-wide mural in the center of uptown Charlotte. Each artist was assigned a letter over the weekend and quickly sketched up their own piece of the puzzle. They put a lot of work into their art today, so swipe to see each artist and go follow and support them. | If you’d like to reshare, please credit me [email protected] ✌? • • @cltiscreative @cltgov @blkmrktclt @brand_the_moth @cltstories @cltshooters @charlottemag @charlottesgotalot @charlotteagenda

The second project, maybe inspired by the traffic light yellow mural painted on the ground in DC near the White House and followed by show-stopping interventions in Brooklyn’s Bed-Stuy and Charlotte, NC, took place a few days ago in Seattle at what is now known as the Capitol Hill Autonomous Zone. A group of artists, led by Takiyah Ward, Joe Nix and Japhy Witte, organized the painting of a large BLM mural on East Pine Street, outlining the blank, white letters and inviting local artists, each listed in the Instagram post above and below, to paint their own letter for the phrase, The result is a personalized, colorful mural pulsating along an entire block.

Final pics of the project and all I have to say is thanks again to these artists for coming out and taking the message further and deeper through your artwork. This is your platform to speak and be heard and the message is loud and clear. Let’s keep pushing forward .. SUPPORT these artists in your community! B: @kimishaturner L: @perrypaints A: @onesevennine C: @thecurlynugget K: @thesoufender L: @tooth_taker and @drakesignanddesign I: @stattheartist V: @aohamer E: @barryjohnson.co S: @snekeism M: @moses_sun and more A: @artbreakerbt TT: @tdubcustoms E: @future_crystals R: @thekingafroshow Organized by @tdubcustoms and @joe.nix Layout by @signsavant #BLACKLIVESMATTER daytime ? @kylekotajarvi , nighttime ? John Fisch .. Special shout out to all the artists in NC and @daflemingo for helping us realize this can happen on Seattle ... MUCH LOVE #vividmattercollective

As Joe Nix told us about the mural in Seattle, "The mural was an idea sparked from the murals in Charlottesville. I saw what they were doing via IG and I was instantly inspired. Knowing I had the means to do it and the street was closed, I went and got the supplies, scouted the location and sent a message to Takiyah Ward to gather artists from the Black community. Takiyah and I were already working on mural ideas of our own to put up so I hit her up to curate artists. I also hit up Japhy Witte, a Seattle artist and OG sign painter that I knew was the only one that could help me map out the letters. The initial spark was from North Carolina and the artist Darion Fleming. Takiyah Ward is an artist and performer in Seattle, and has been a friend for years.

"This is definitely not about me but about the artists' voices. The point was to make the mural a platform to launch a dialogue between black artists and the community at large. We now have other artists from other cities asking for the template to do murals in their cities and we are making sure these artists are well equipped to lead and set the same platform."