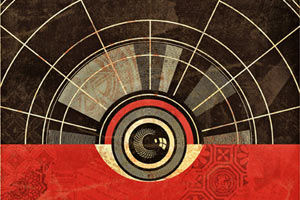 It has been a few years since Shepard Fairey has shown a new body of work (Deitch Projects was the last official solo show), and since Fairey has been interviewed for our November 2012 Politics & Art issue, we are looking forward to his new show, Sound & Vision, opening at Stolenspace Gallery in London on October 19. 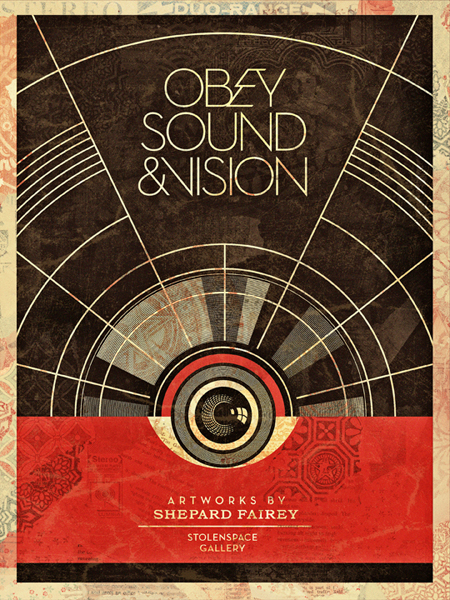 It has been a few years since Shepard Fairey has shown a new body of work (Deitch Projects was the last official solo show), and since Fairey has been interviewed for our November 2012 Politics & Art issue, we are looking forward to his new show, Sound & Vision, opening at Stolenspace Gallery in London on October 19. Even old Juxtapoz friend Dj Z-Trip has provided the soundtrack. The exhibition will be held across 2 spaces, the permanent StolenSpace gallery and The Loading Bay on Dray Walk.

We are delighted to announce a solo exhibition of work by Shepard Fairey opening on 19th October 2012; his first in 5 years. This will be Fairey's second major London exhibition, following his collaboration with the us in 2007. It will feature a range of new works including mixed media paintings on canvas, works on paper, retired stencils collages, rubylith cuts, and as well as serigraphs on wood, metal and paper.

Sound & Vision, the exhibition title is taken from the David Bowie song of the same name. Bowie has been a major influence on Fairey, because he was able to master music and visual presentation with equal virtuosity. Music is an artistic medium that Fairey reveres almost more than he does visual art. He comments: "Music is visceral, but also has the additional powerful layers of the lyrics, with their content and politics, and the style, politics, and personalities of the musicians themselves. No matter how much I love art, or try to convince myself of its relevance in society, the fact remains that music is much more able to reach people?s hearts and minds." The artist hopes to be able to induce in people, even a fraction of the emotion that hearing a new song or listening to a familiar one can evoke.

Sound & Vision will incorporate a diverse array of mixed media works, which embody both the political and social influences on Fairey's work, particularly that which are directly inspired by music. In Fairey's vision art and music are kindred spirits, and as the work began to develop, Fairey reached out to producer and DJ, Z-Trip to create a soundtrack that embodies the spirit of the show. Z-Trip went to work immediately to produce something worthy of Fairey's vision. Z-Trip comments "Shepard does visually what I do musically. We have many of the same influences, it made perfect sense for us to collaborate on Sound and Vision, I was honored to do it." Not only David Bowie, but count less other musicians and bands, such as the Sex Pistols, Roxy Music, Gang of Four, the Clash and Metallica, have had an impact on Fairey's work. Throughout the exhibition there will be elements on hand to encourage viewers to experience the interaction between art and music. Fairey provided records from his own collection as well as customised vintage turntables to enable viewer listening. This section of the show is complemented by a display of seventy-two works, which are inspired by the 12 inch LP sleeve cover. The artist will therefore use both sound and vision to connect with his audience.