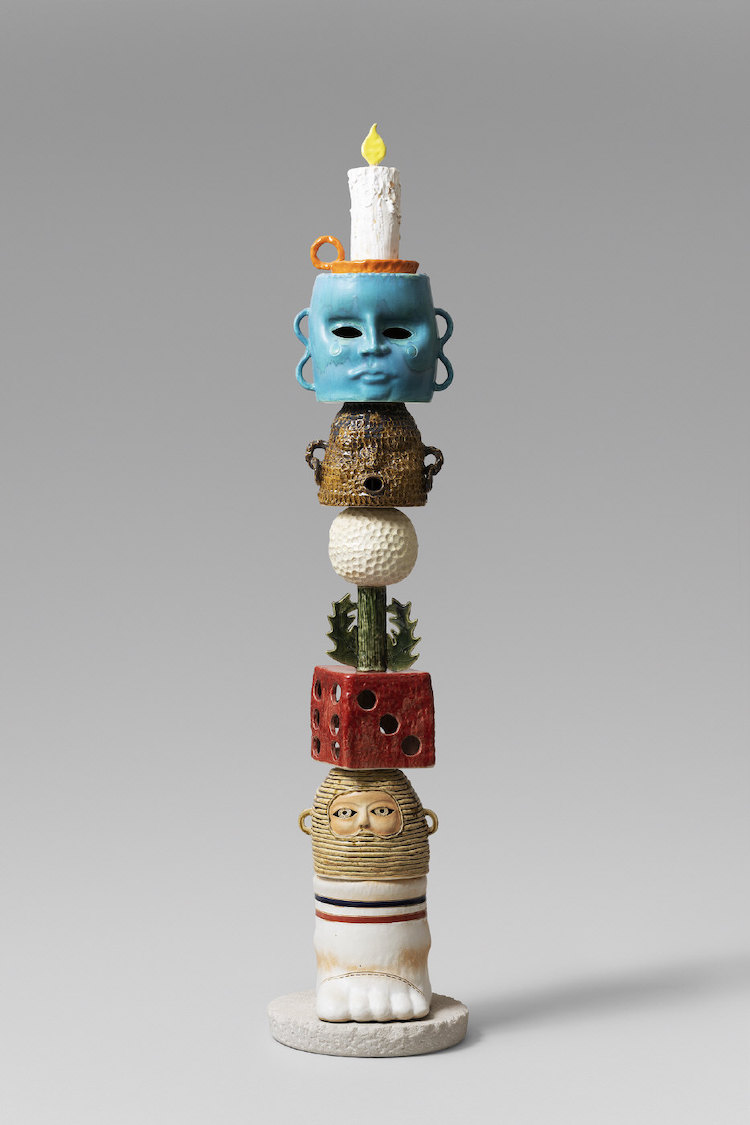 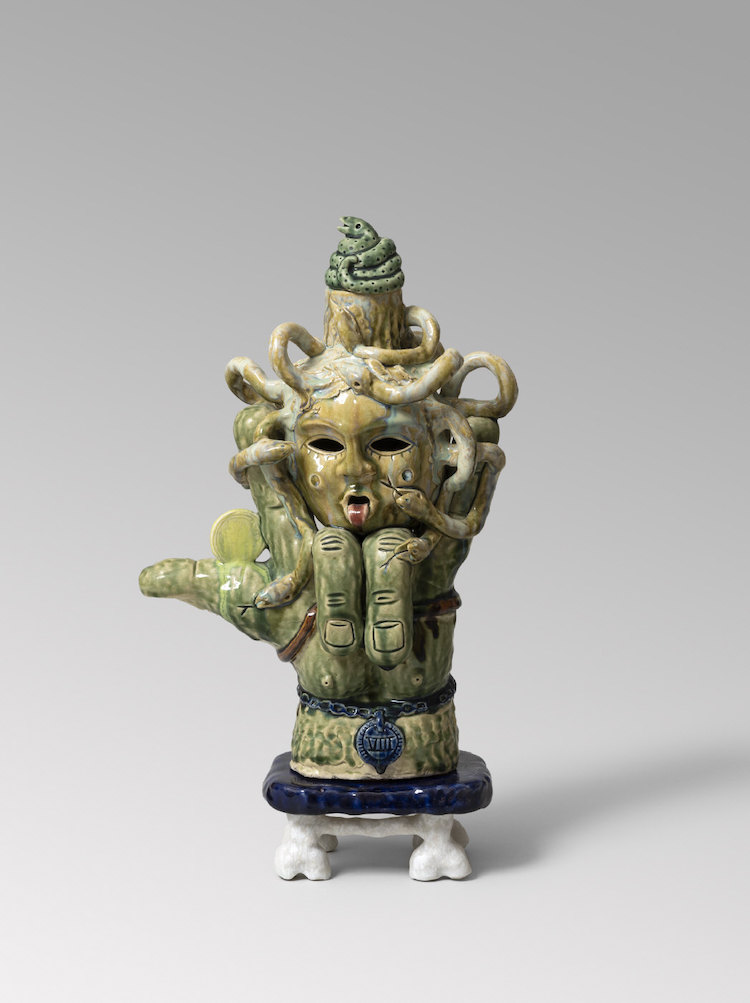 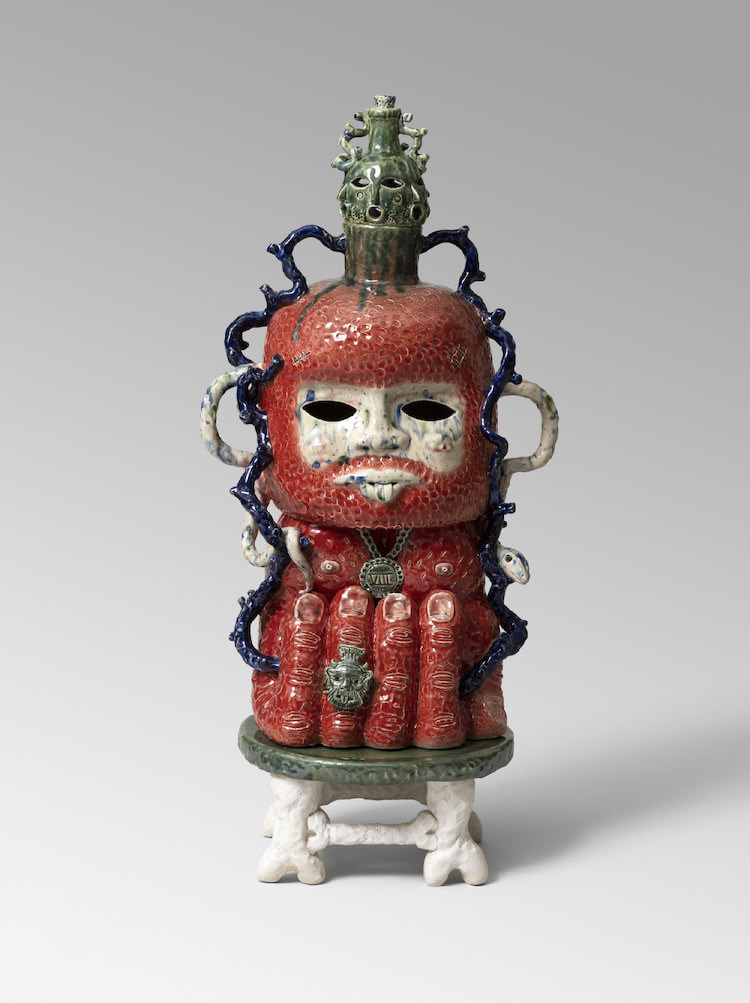 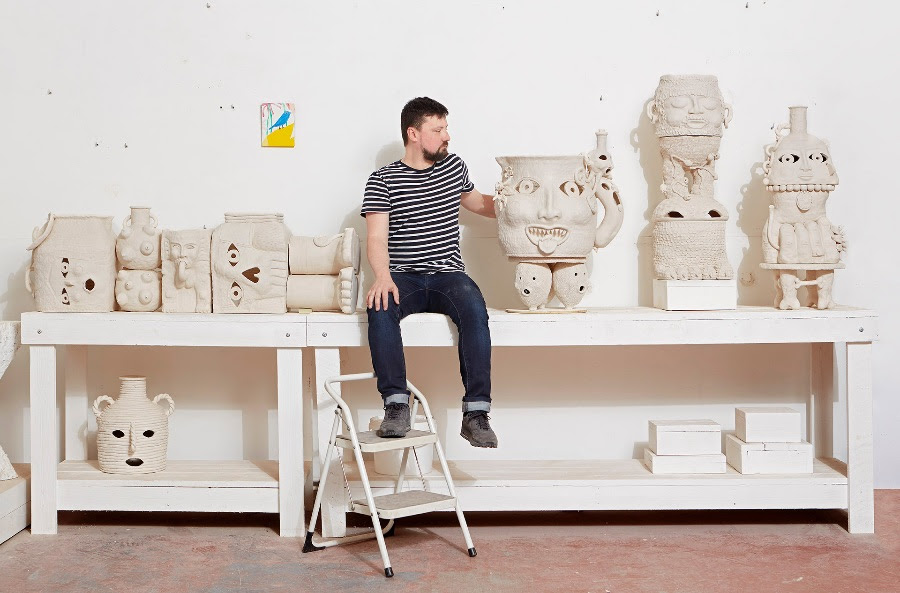 Richard Heller Gallery is pleased to present: Eric Croes: The Gods Must Be Crazy. This is Croes' second solo exhibition with the gallery. Eric Croes creates a procession of singular works, a fresco of characters coming straight from his studio and his imagination. Inspired by his true and dreamed travels â€” from Southern Italy to California, Egypt or Belgium â€” by iconic figures â€” from Janus to Cleopatra â€” by traditions and folklore â€” from Roman votive hands to sailor tattoos â€” but also by his impressions and sensations. He mixes and melts them, knots and recomposes his visions through ceramic. Croes shows an intimate and unique mythology. A universe filled with symbols, stories and poetry.

"The gods speak to us. They are not harsh and cold, as the books claim. They are neither serious nor fair. The gods are chatty and demanding. They champ at the bit, get angry, and sweat. They cry and they sing. The gods tell us their stories, they narrate their little secrets, they stage their desires. The gods make promises and swear out loud. They like that we pay attention to what they say, that we give them all the room and take good care of them. So, keep your ears open. Listen carefully. They are full of colors, shapes, words. The gods are full of contradictions. They are overflowing. They pretend to laugh at death. They say that they bring luck, like a clover or a gold coin. They have the key to all things. They know how to charm snakes, change them into tails. They possess the antidote to all poisons. They only drink done in one. And they like to toast after dancing on the graves. They like shells and wear several watches to be sure to be on time. Yet they are not afraid of the passage of time. They know that their legend lives on, that nothing in them dies. They stick their tongues out in order to smile longer. They keep disease and fear away. They are as smart as monkeys. Reversible like a social climber, they can contradict themselves, and mix the extremes. They reconcile life and death. But one thing makes them freak out â€” to cut themselves. Because they speak with their fingers, their palms, and their nails. They make big gestures and intimate signals. They ward off misfortune by slipping it under their skin. They see everywhere, at 360 degrees, even in holes and in the dark. In the back of their heads, they cast glances. Depending on their mood, they sometimes wear Birkenstocks, sweat socks or bear paws. They like to philosophize with their toes. They play truth or dare. They stand on pedestals made of our beliefs and our remains. They like to relive historical moments, from the dancing plague to future pandemics. They touch each other, even when itâ€™s forbidden. They are crossed by the stars. Sometimes they have wings. They are the beginning but also the end. The gods do not hide in our necks or in our hearts: they prefer to sit in our hands. Between our fingers, the gods exist. In our actions, they manifest themselves. This is why, in order to hear them, you must first listen to your hands. The sky is too small for them, too narrow. They prefer to emerge directly from our palms. Itâ€™s a more comfortable, a much wider throne. They have nothing to hide. Truth comes out of their mouth. They love to break the bone to suck the substantial marrow. They are not fashionable. They wear chain bracelets. They know that a little of everything is worth more than all of a single thing. They also know how to roll a dice under the tongue. Like the Three Wise Men, they wouldnâ€™t miss a miracle for anything. Nor a good bottle of wine. They love drunkenness, books and baths. They promise that they can tell your fortune. When they bicker or do the quest. They are never alone, never unique, as the books claim.

The gods are like us. A little crazy. They talk, tell lies to each other, spread gossips and mysteries. Bend over backwards to be heard, to be loud. Because death is too quiet, fear is a dry throat, a mouth without words, an unspoken lie.

The gods, like men, do not know how to be silent.â€ - Boris Bergmann