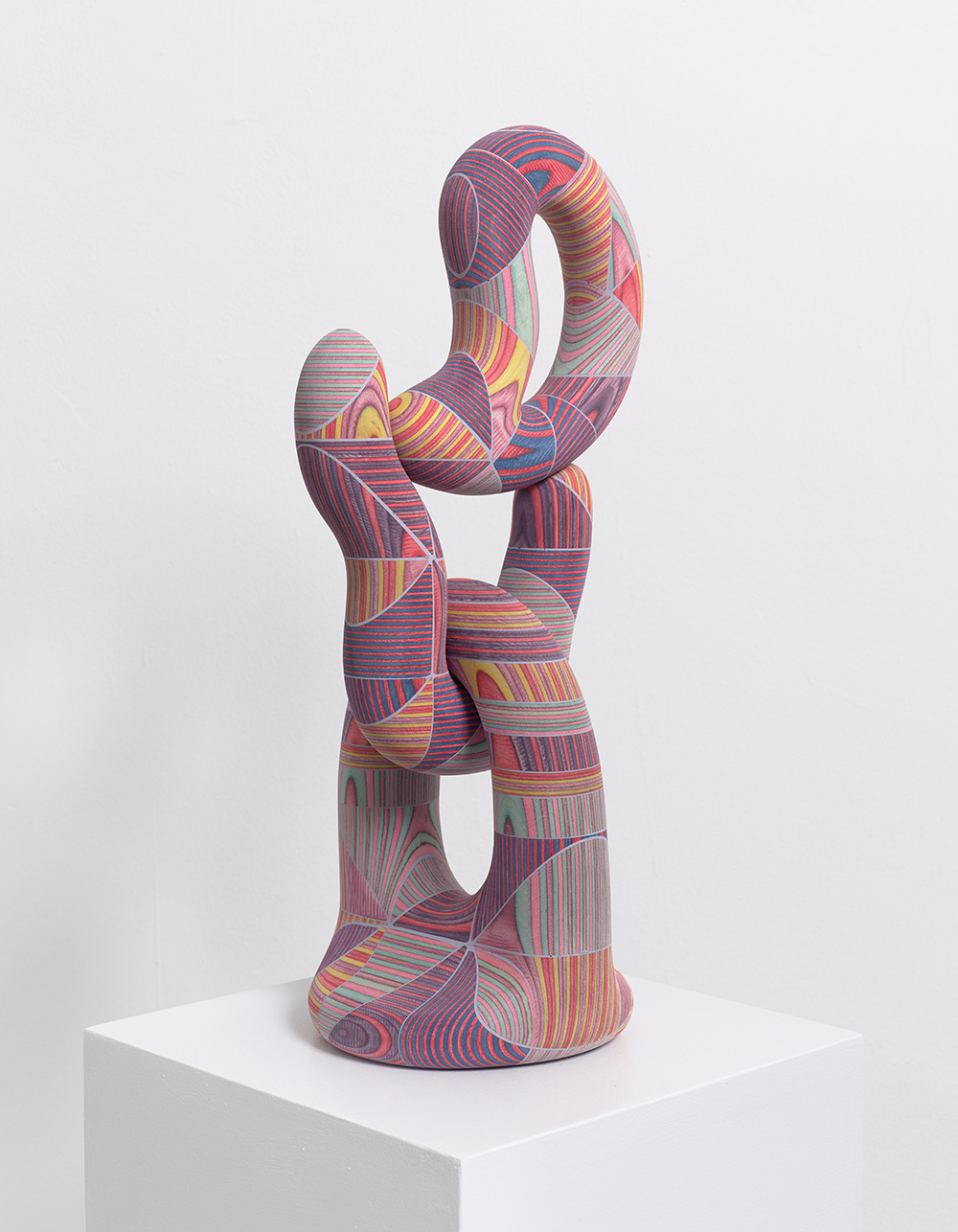 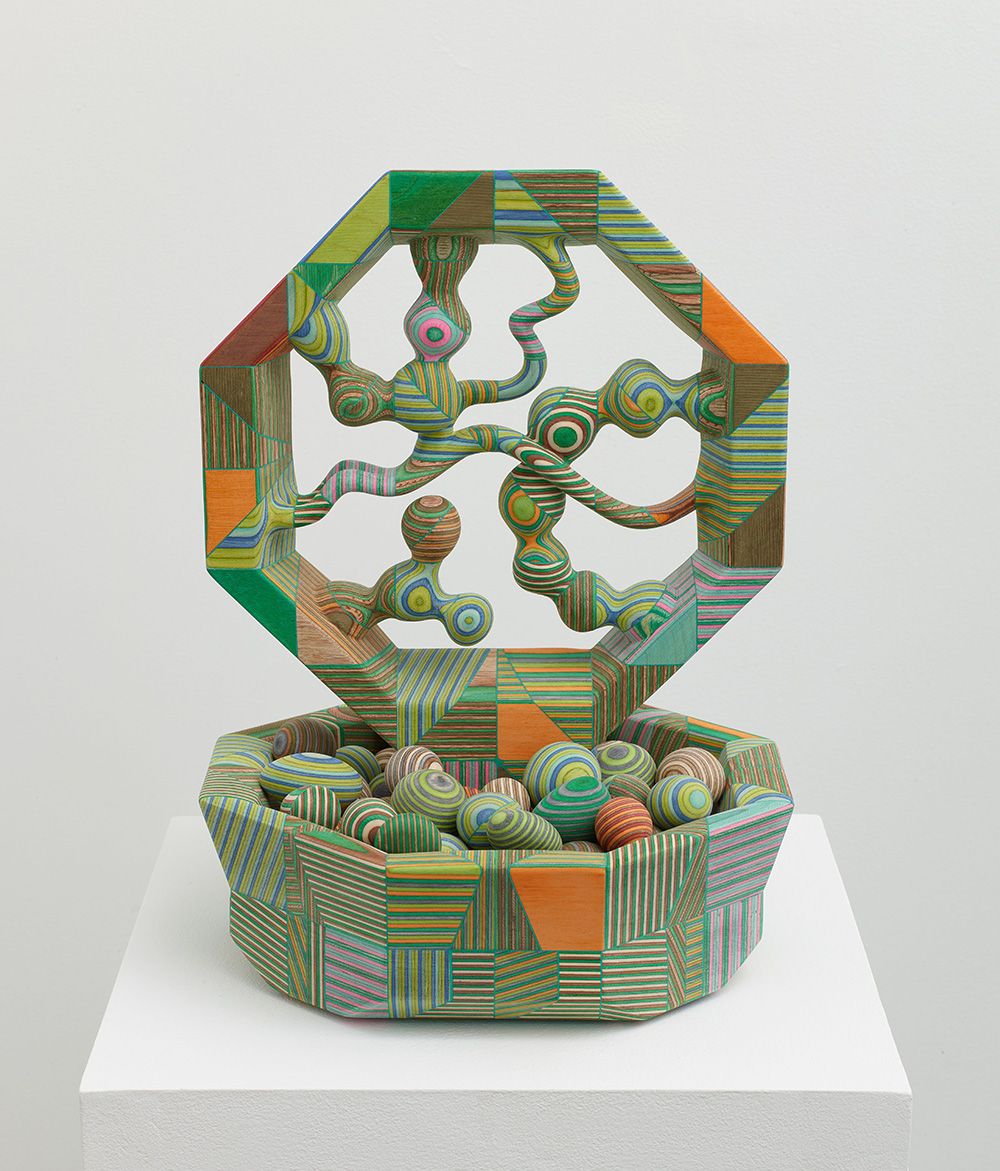 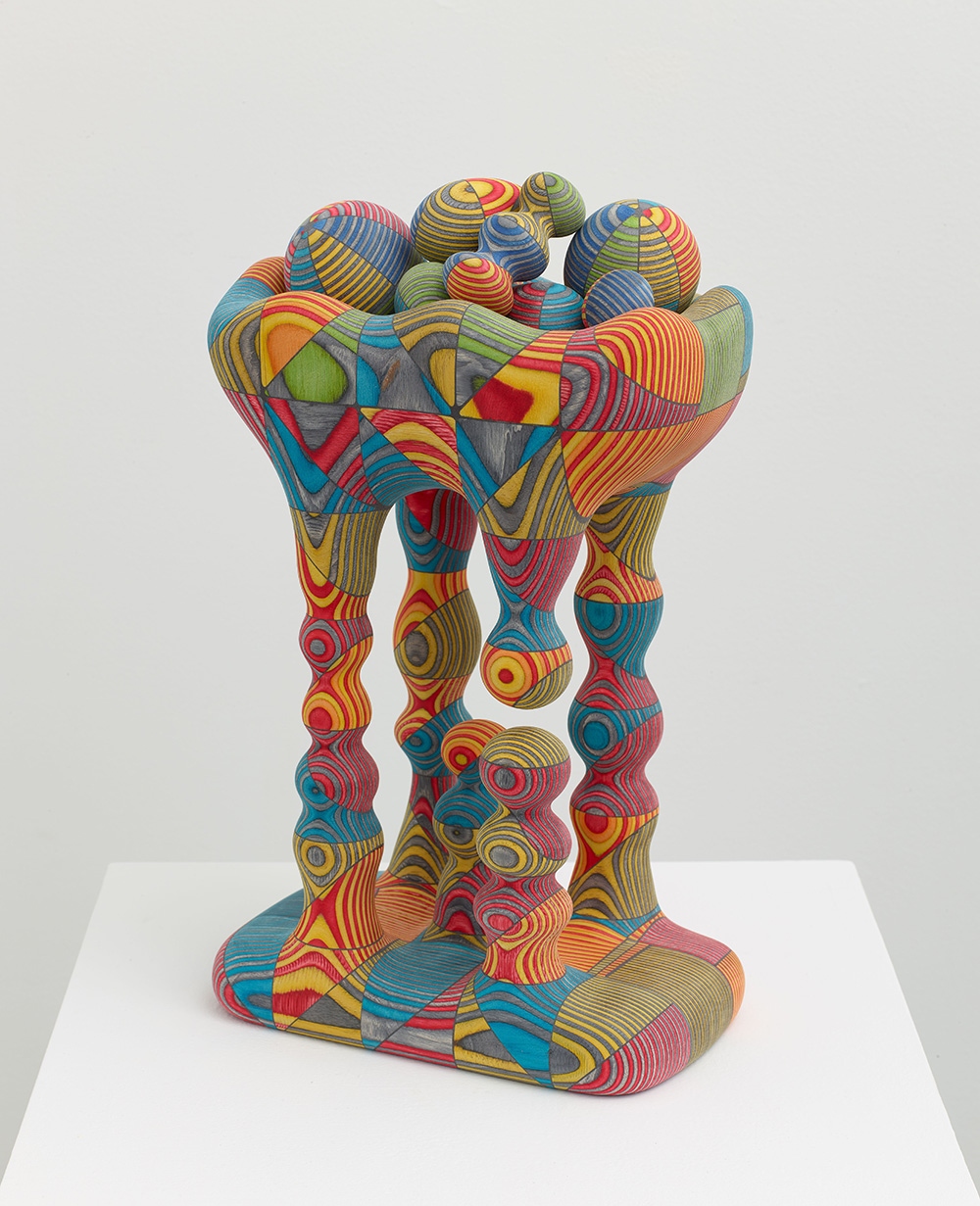 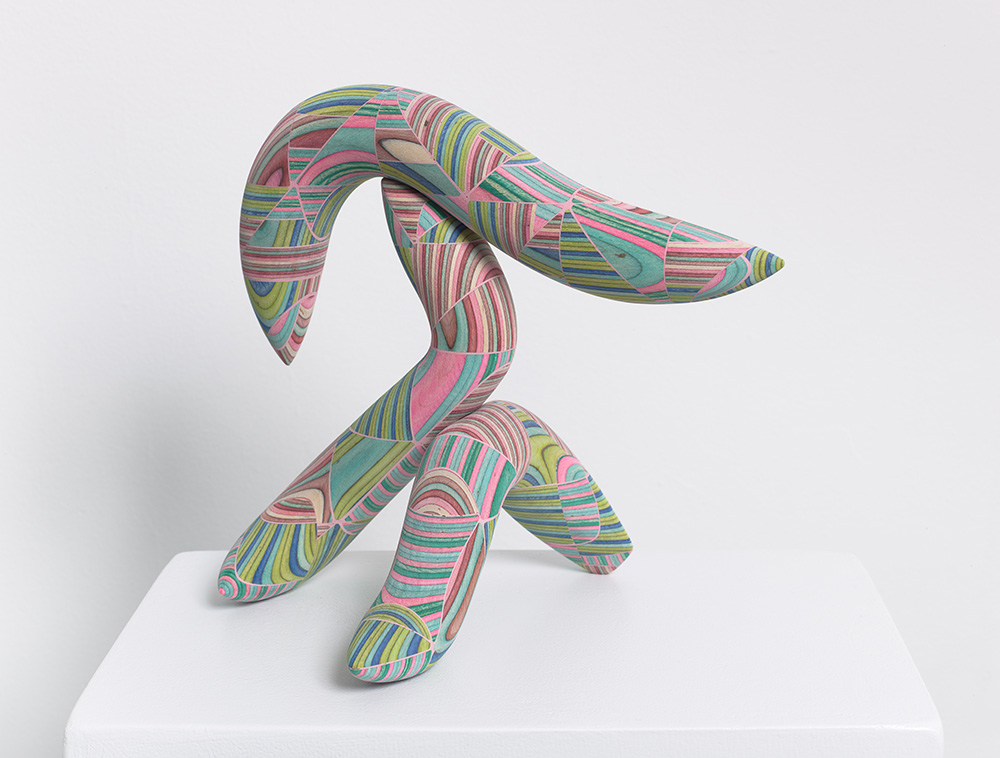 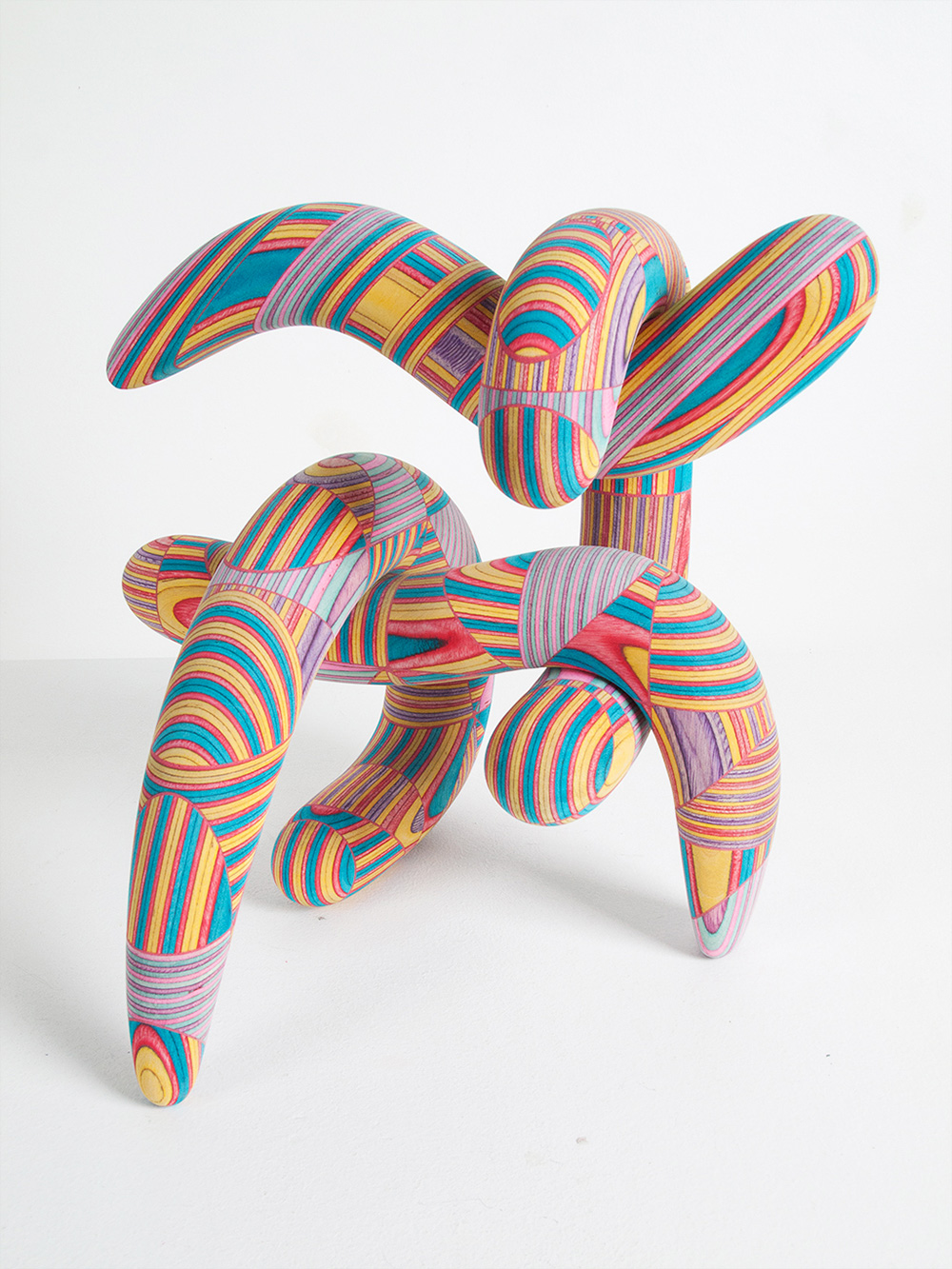 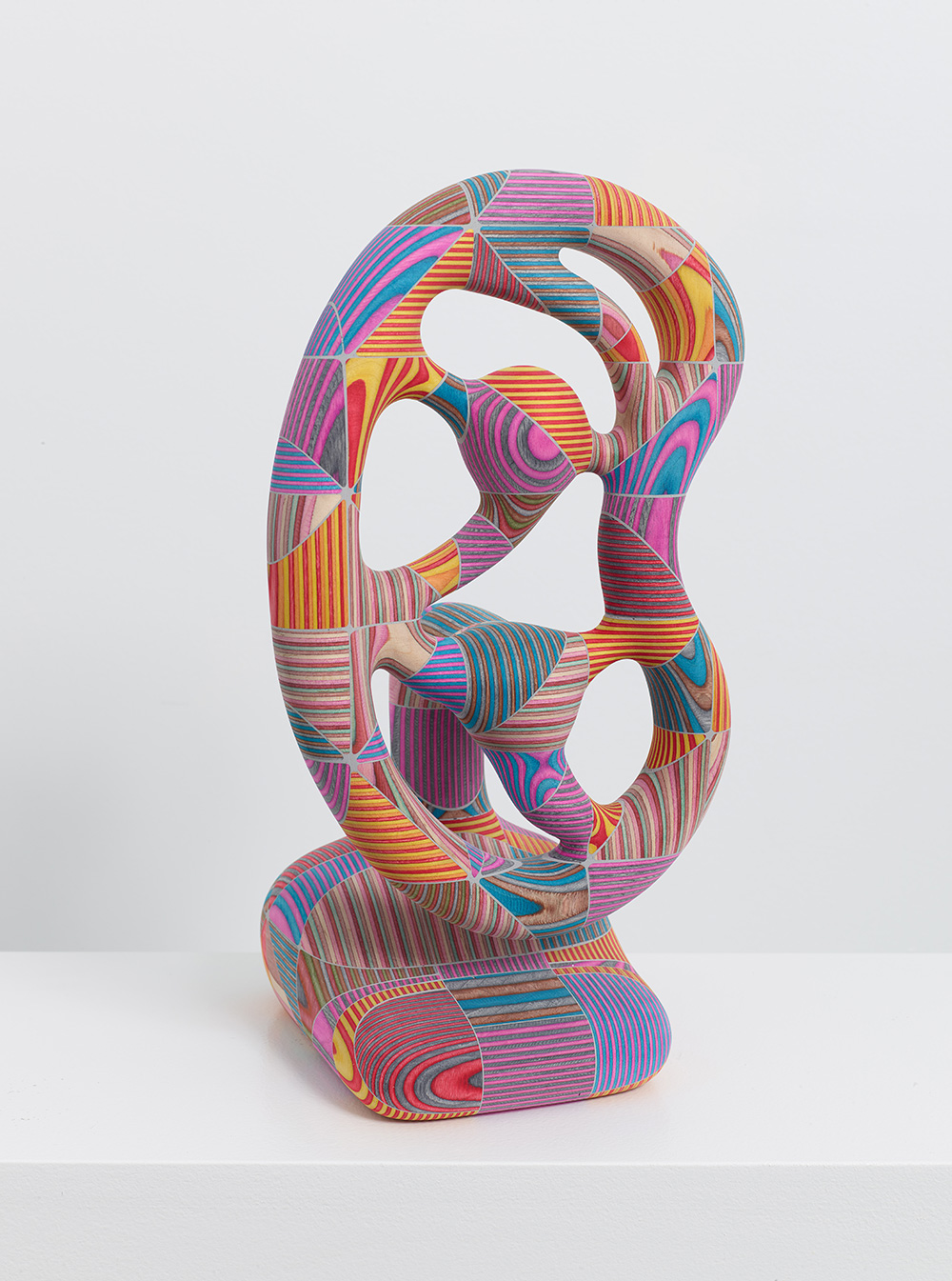 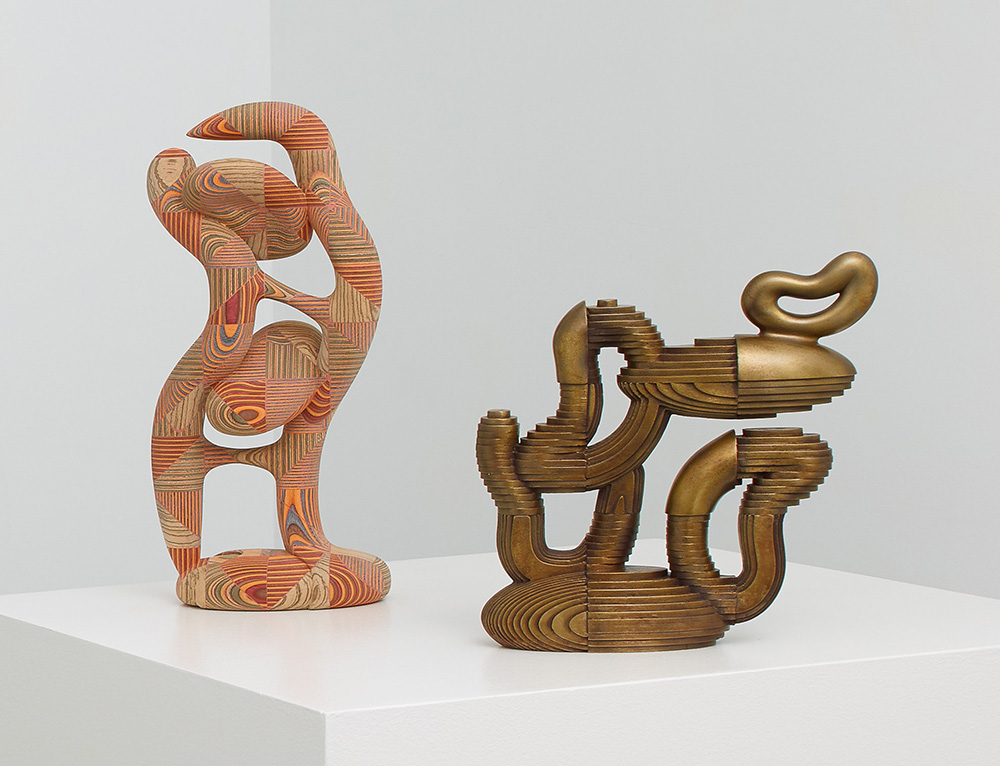 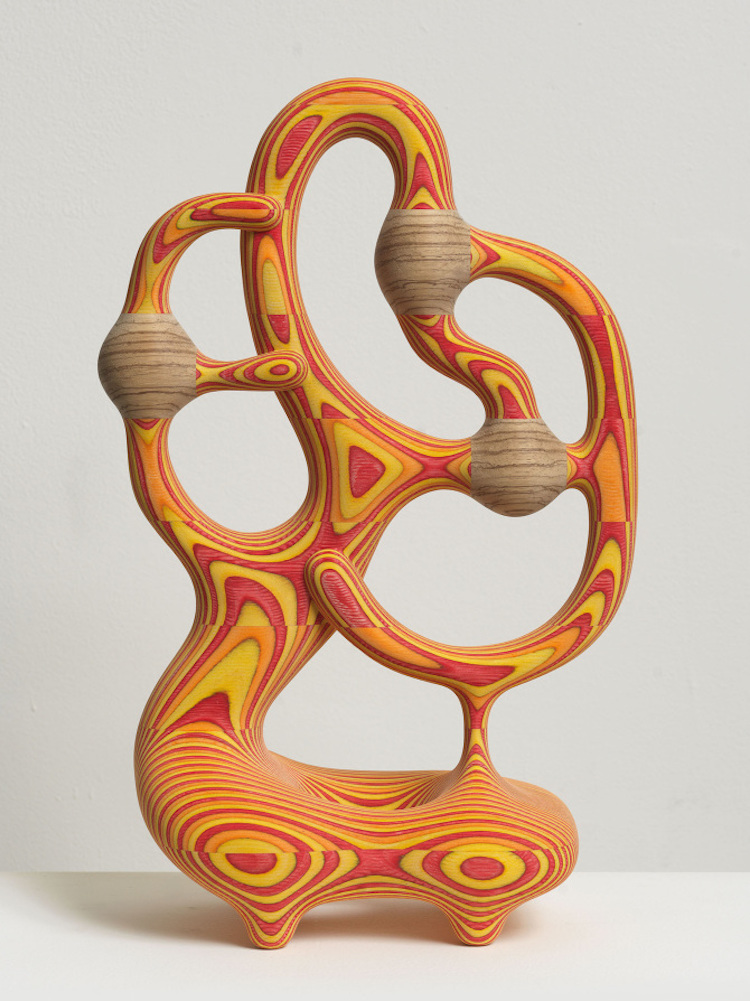 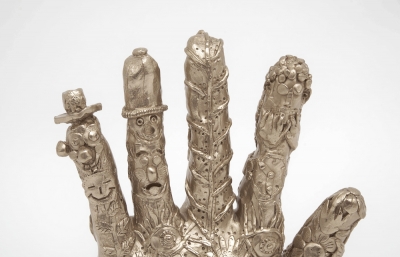 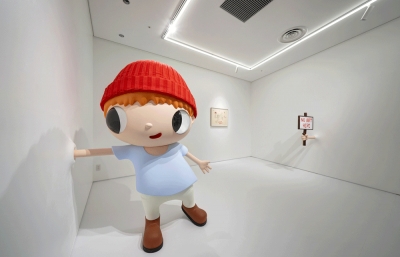 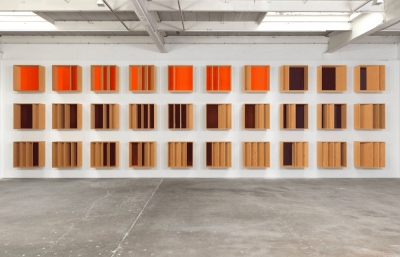 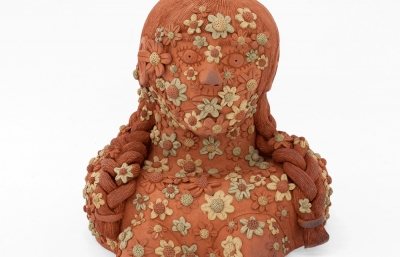 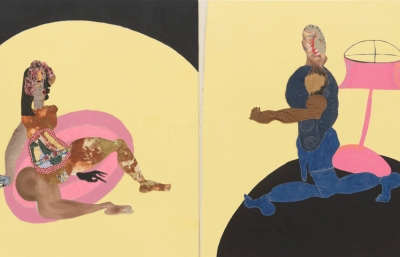 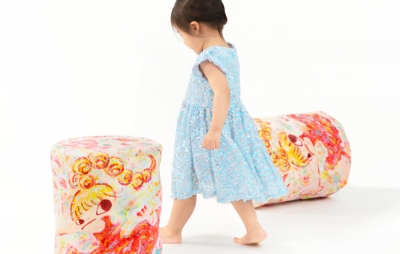 Rokkaku Ayako and AllRightsReserved Collaborate on the "Ceramic Stool"

At first glance, Bayne Peterson's work demands attention, using a colorful and layered technique to create abstract shapes. They're also polished so finely that it might take a moment to realize what material they're even made of, at which point they begin to invite more curiosity regarding their origin. Initially, It may not be clear that his work draws from a rich artistic tradition, but upon further inquiry, it's clear that Peterson's extensive academic study of historical Inuit art has laid a contextual framework for his elaborate, elegant sculptures. He creates something of the current moment, but respects and acknowledges that which came before. We're hyped on him, so we asked some questions to get a small peek into the process and background of his work.

Where are you from and when did you start making art?
I was born in Palo Alto, California but grew up in Arlington, Massachusetts. I’ve been making art since I was a little kid. I would always carry around a sketchbook and draw pretty much every day. My mom used to take me to museums where I would spend hours sketching sculptures and ancient artifacts.

When did you start making your sculptures as you make them now?
Part of the way through graduate school, around 2012, I started to become more focused on woodcarving. As part of my thesis, I researched carving traditions from around the world and especially 19th and early 20th century Inuit sculpture carved in walrus ivory. In my studio, I began carving sculptures in wood relating in some way to this research. For example, I made a series of sculptures based on a walrus-ivory sculpture of a kerosene camp stove from the 1930s. The more I worked with carving, the more excited I got about it. It’s a very free way of working and I like how open-ended and organic the process can be. It’s often hard to see exactly what the result will be from the start, and sometimes I notice something along the way that changes the entire direction of a piece.

I also attribute my current approach to a shift I took in 2014 towards pure abstraction. Prior to that year, most of my work was in some way representational or narrative-based. Once I removed the necessity to always ground the work in concrete references, it suddenly felt much more open. That year, I also started carving dyed plywood, which created new possibilities for optical effects arising from relationships between color, pattern, and form. 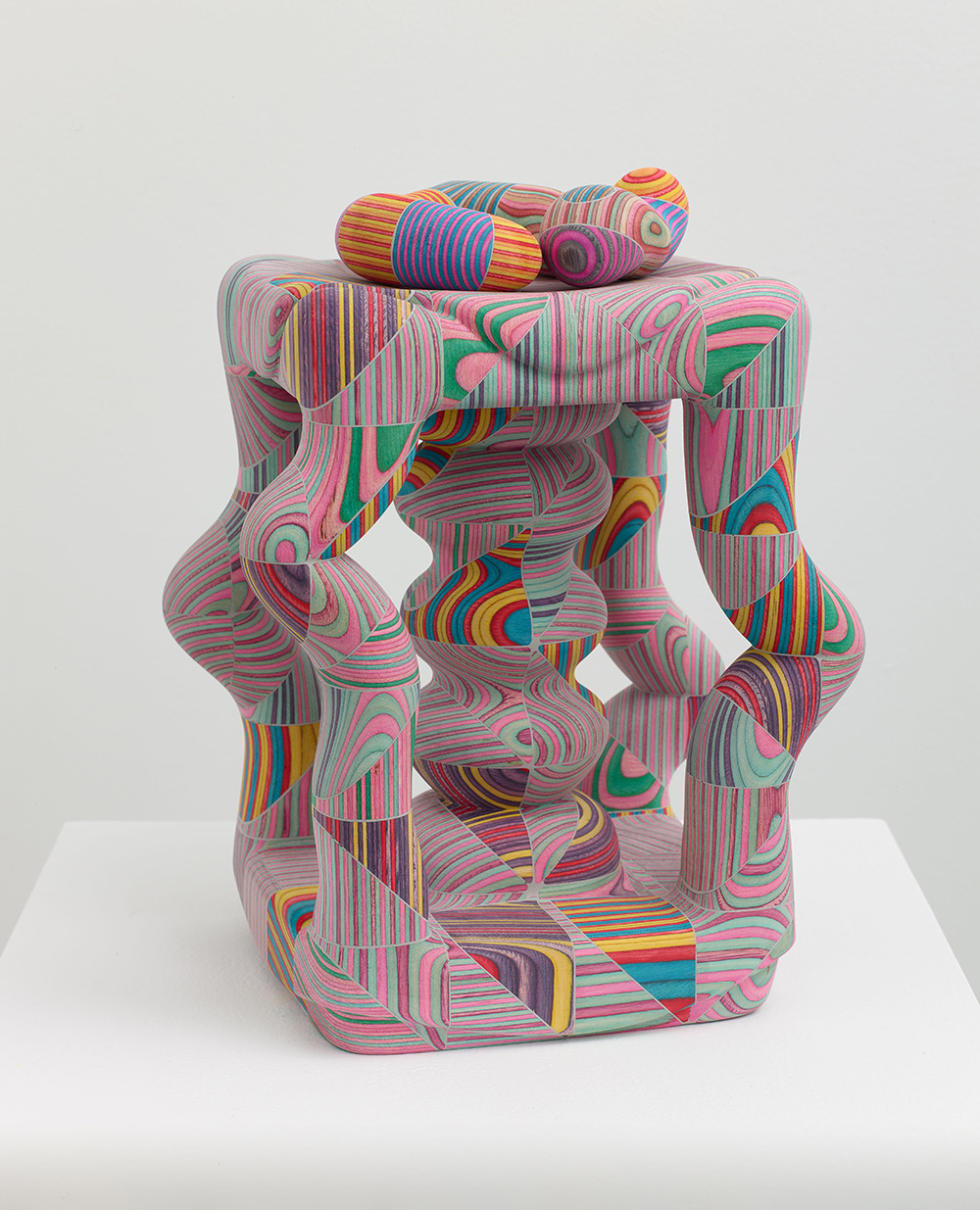 What material are your sculptures? And what's a rough picture of how you make them?
I work with many different materials, but my primary material right now is plywood. My work is mostly done by hand, occasionally with some digital fabrication mixed in. I work with a variety of power and hand tools, like grinders, rasps, files, and a lot of sanding.

Did you go to art school? If so, what's your progression been like since leaving there?
I didn’t go to art school for undergrad; I went to Vassar College and majored in Art, focusing mostly on painting and printmaking. Later on, I decided to go to art school for an MFA in Sculpture at the Rhode Island School of Design. I got a grant from RISD the year I graduated, in 2013, to travel to Canada to continue researching Inuit art. So, the summer after graduating, I drove to Quebec to research in the special collections at the Canadian Museum of History where they have a huge collection of Inuit art. The grant also allowed me to spend some time on Baffin Island, where much of the art I was interested in was made. It was an amazing experience, and gave me a lot of ideas for new sculptures, as well as some writing. After traveling in Canada, I decided to move back to Rhode Island to focus on my work, where I’ve had a studio ever since. 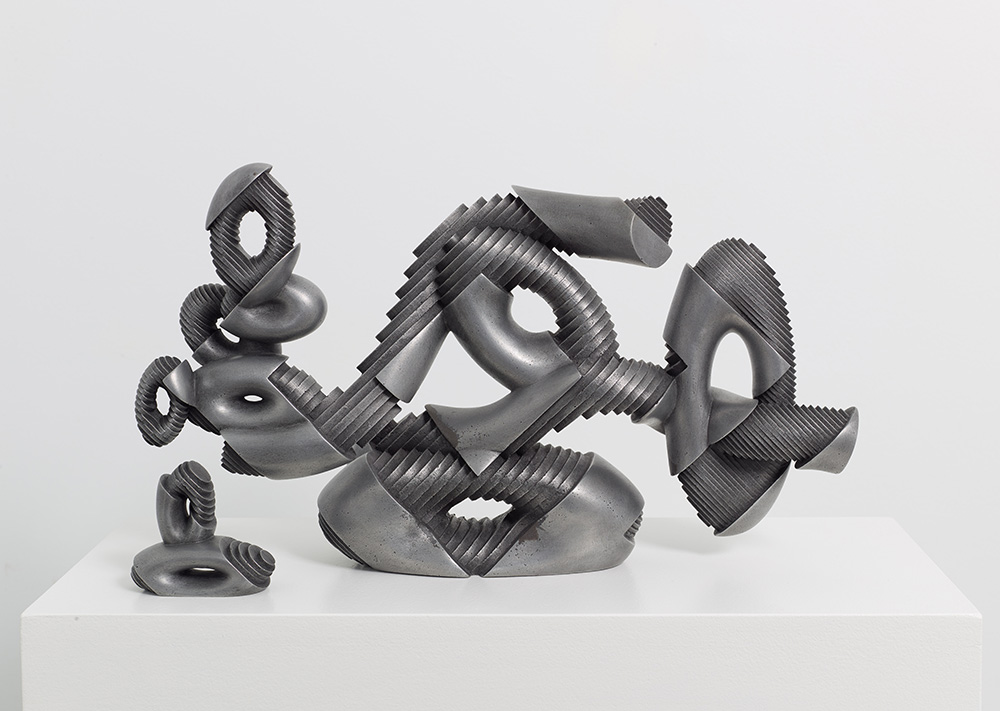 What kind of work would you make if money wasn't an issue?
I would like to make more large-scale work. Lately, I’ve been working mostly small-scale, but last Fall I made a six-foot-tall plywood sculpture with a large vessel form in the top filled with sand, in which several smaller sculptures are “planted.” It was great to work on this scale, and I would like to make more like these and even larger.

Who's one artist today that you think is on "another level."
Nadia Haji Omar. I love her approach to color and pattern. The level of minute detail in her work is amazing. 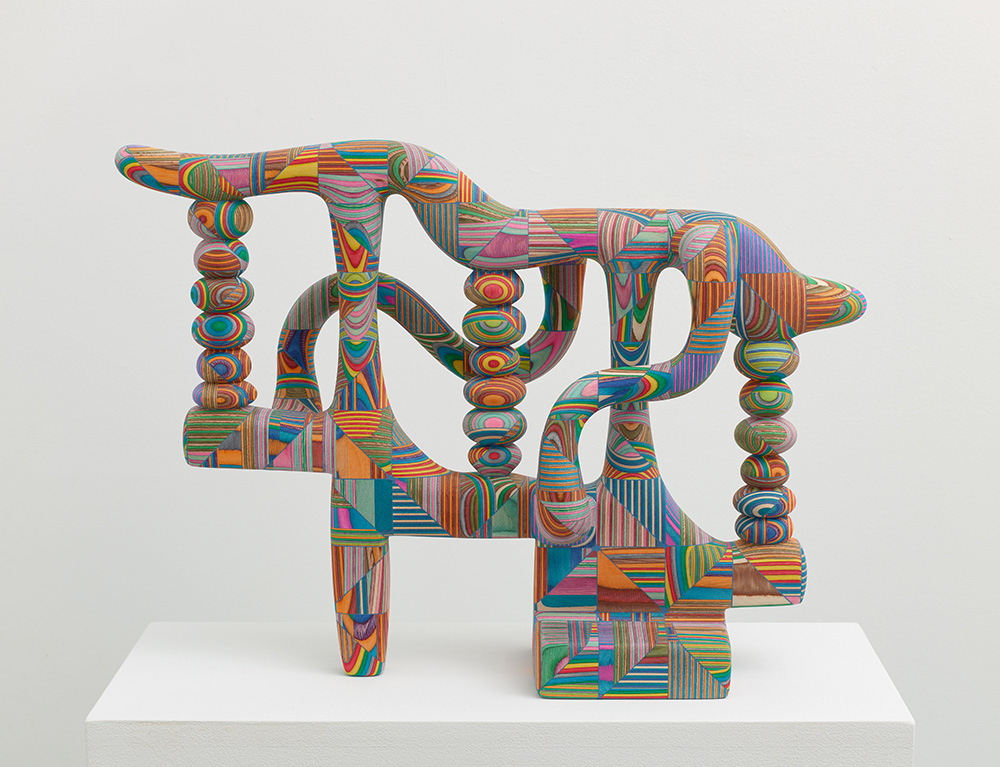 What's your relationship to color? How do you choose colors and how do you get them just right?
At the start of a sculpture, I usually have a general idea in mind of an overall color effect, made up of a mixture of colors, like pixelation. When planning this mixture, I like to throw in odd choices that might disrupt what would otherwise be a purely harmonious effect. This can make a color combination stranger and more interesting.

What was the last album you listened to?
The soundtrack to Koyaanisqatsi by Philip Glass.

What are some of your recent shows?
I was recently in a two-person show with Graham McDougal at Providence College, and before that, I had a solo show at my gallery, Kristen Lorello in New York.

Rokkaku Ayako and AllRightsReserved Collaborate on the "Ceramic Stool" 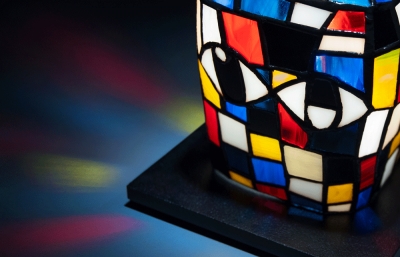