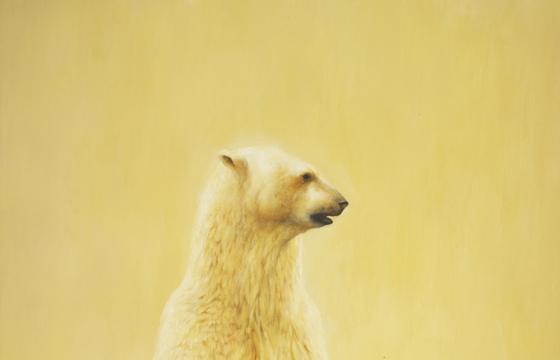 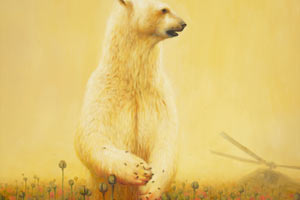 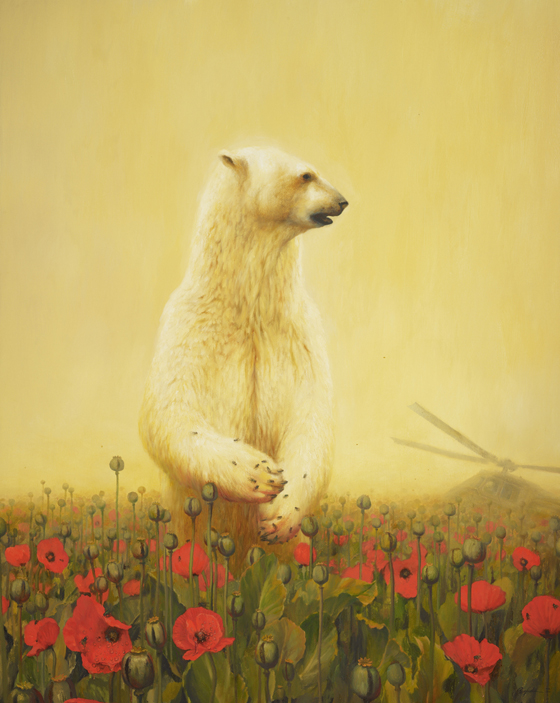 The paintings of “Empire” explore allegorical themes of power through a contemporary eye. Wittfooth’s previous animal meditations have evolved into the paradoxes of world consciousness. The large canvas “Occupy” visualizes the recent Wall Street protests; “I wanted to play off of the idea of the symbol of Wall Street, the bull perched up on a girder,” says Martin, “being swarmed by songbirds, who have no perceived effect whatsoever on his position, despite the great deal of noise we can imagine them collectively creating.” The beautiful canvases reveal the dreams of dominion, feral spirits occupying an empire of the past, present and future. A white polar bear stands vigilant over foreign poppy fields, a crashed chopper beyond in “Harvest.” A white she-wolf nurses primates as Romulus and Remus in burning ruins in ”Capitoline.” Martin describes his work as “classically-inspired but contemporarily-filtered allegorical realism.”

Envisioning the familiar with the foreign, the paintings portray ‘empire’ as a dream in mythical repetition. Wittfooth says, “The behaviors of modern empires parallel those of history, and the dynamics of power and hierarchy that have always characterized them.” The past becomes a painterly vision of a global psyche, lucid in theme, vibrant with tonality and color.

“Empire” will feature eleven oil paintings, with the largest of Martin’s work completed. Rich color schemes, scale, and themes of the exhibition mark his most ambitious work to date. “I am varying up my palette quite drastically, and have approached each piece with a fresh color scheme, light, and atmosphere,” says Martin, unifying the idea of “Empire” by a wide scope of theme and technique. “I was driven by the idea of making these scenes close to life-size, to imbue them with a sense of presence, to be immersive, transportive.”

The opening reception for “Empire” takes place Saturday, September 15 at Corey Helford Gallery. The reception is open to the public, and the exhibition will be on view through October 6, 2012. 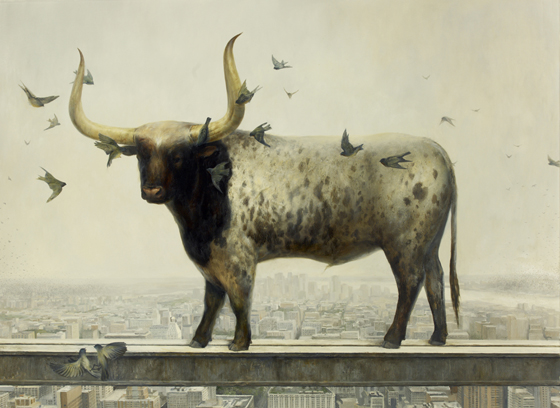 Born in Canada, raised in Finland, and now residing in New York City, Martin Wittfooth (b. 1981) received his MFA from The School of Visual Arts. He has exhibited extensively in galleries and museums throughout North America and Europe, and his work has appeared in numerous publications, including cover features in books and magazines such as New American Paintings, Hi Fructose, and American Artist. “Empire” is Wittfooth’s 7th solo exhibition.