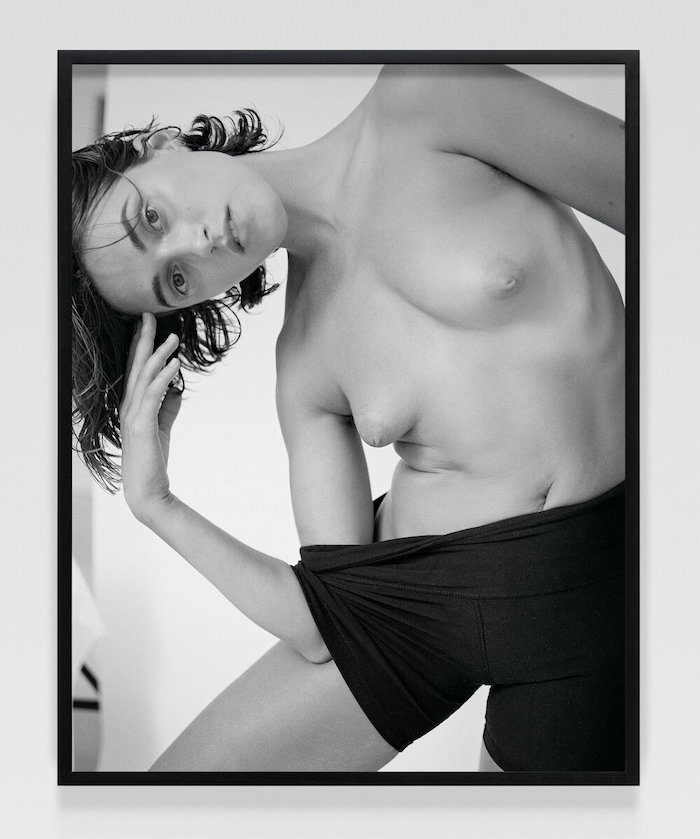 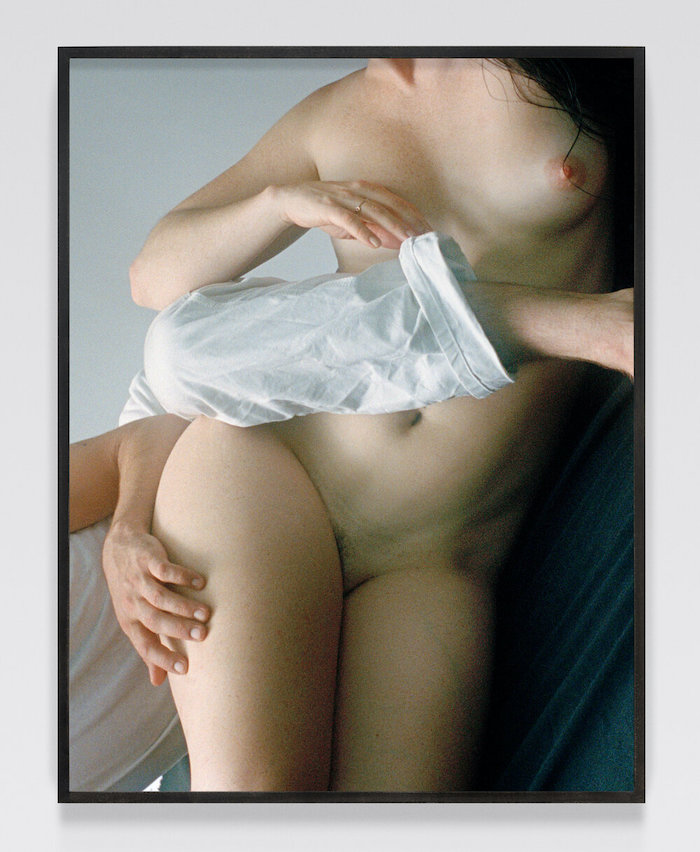 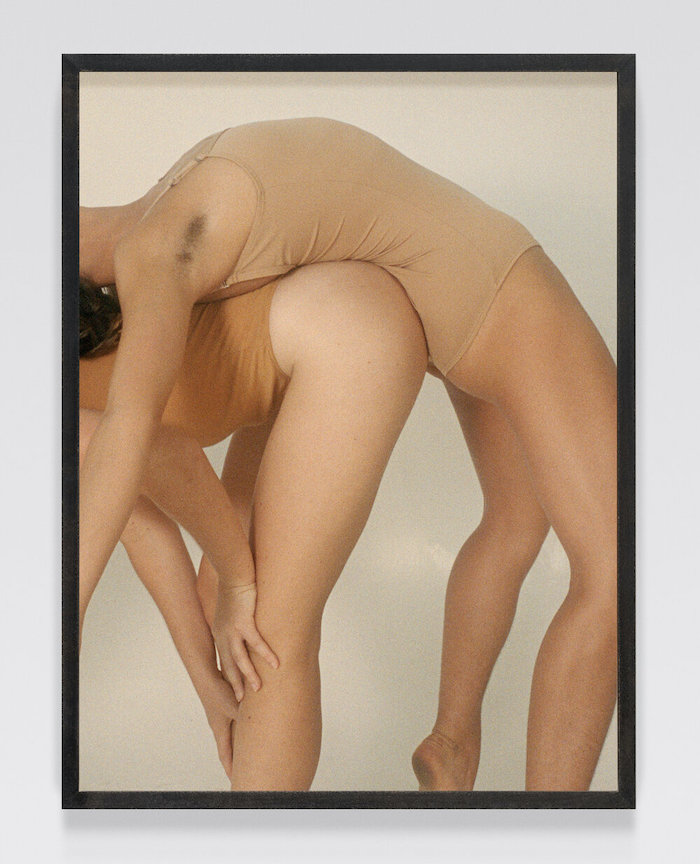 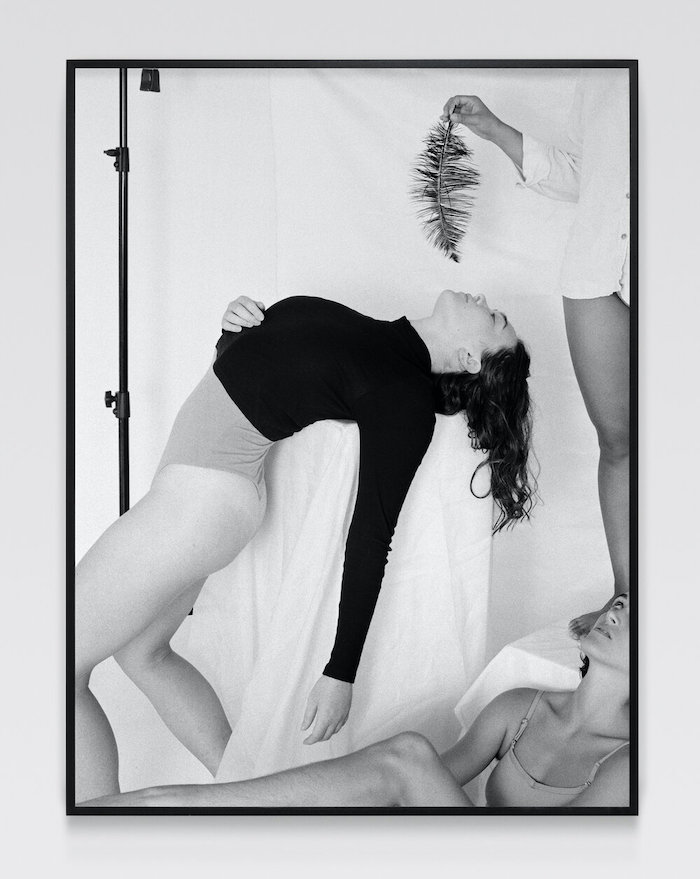 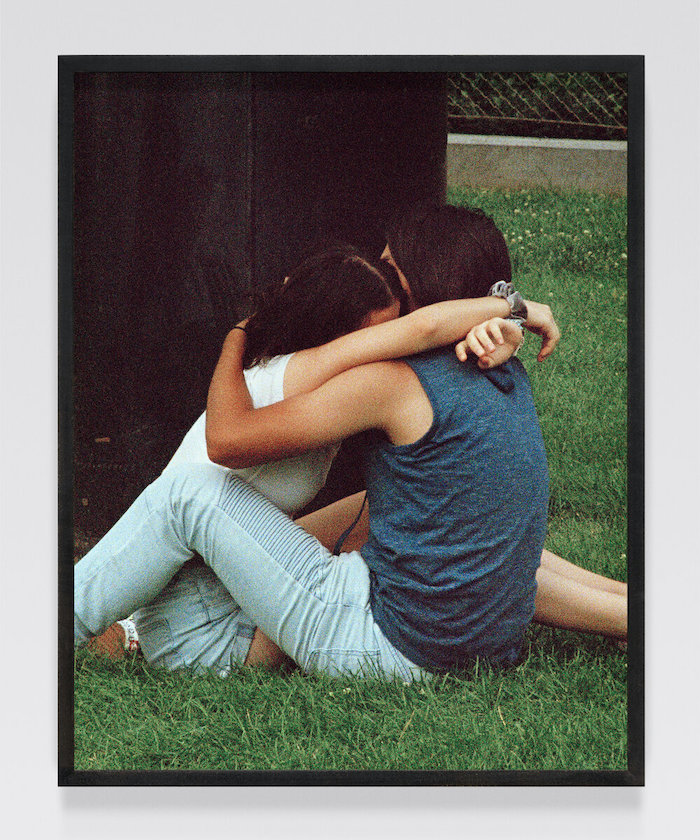 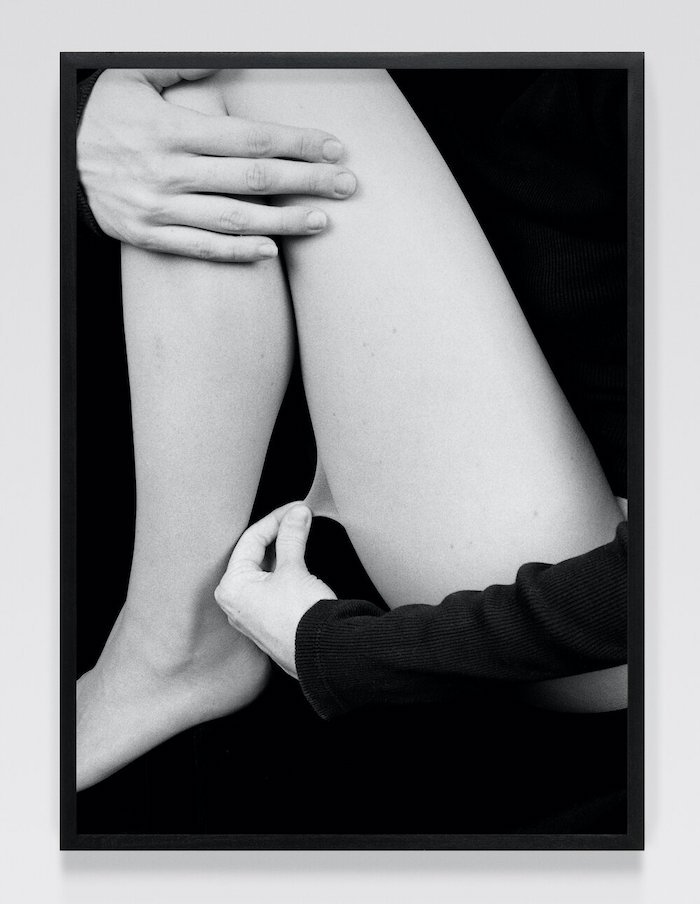 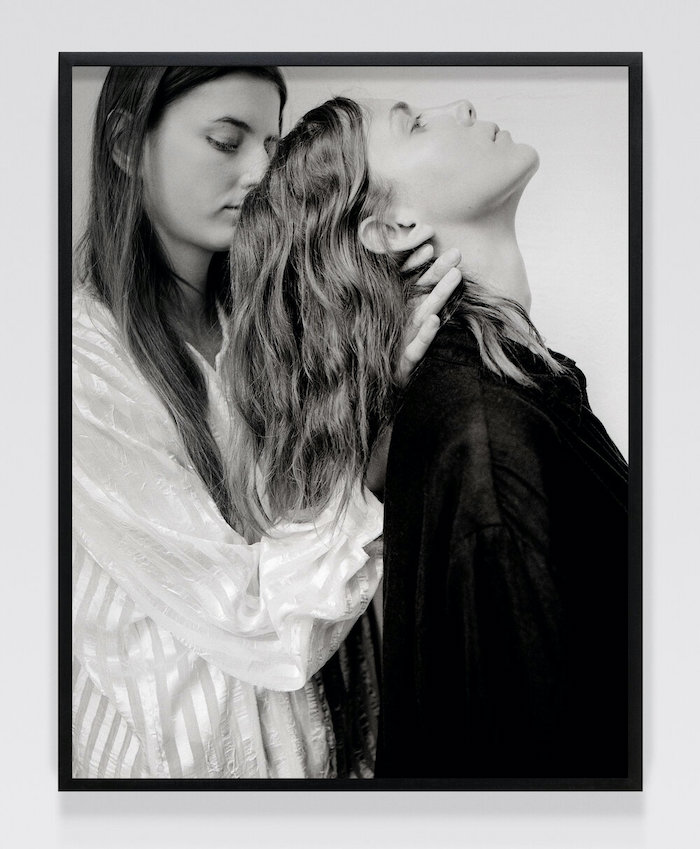 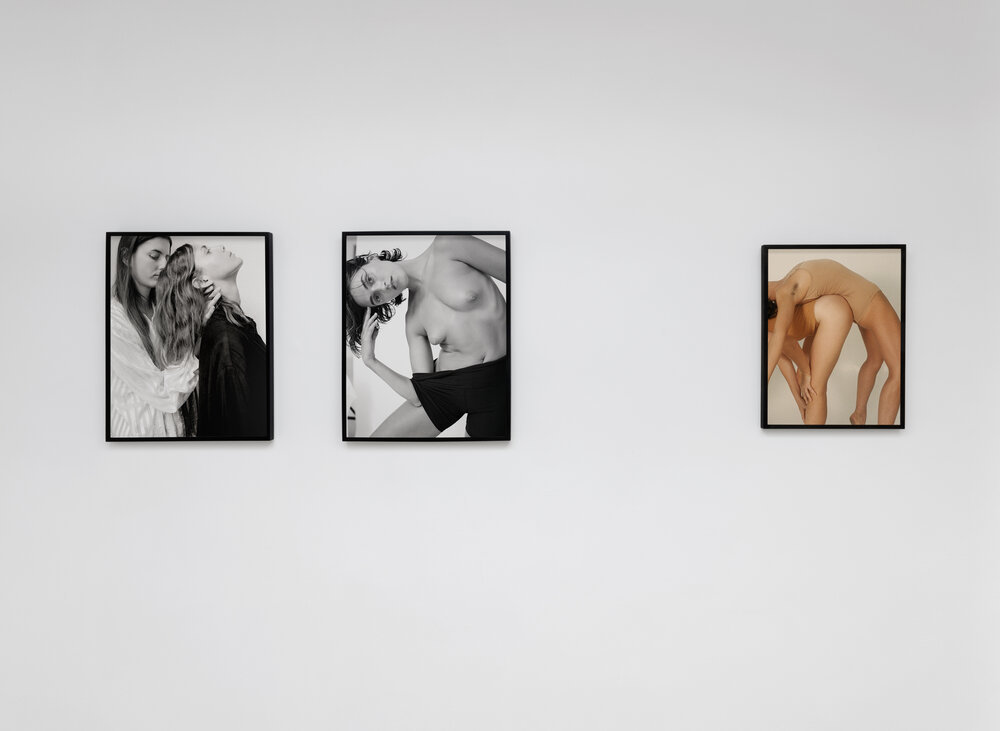 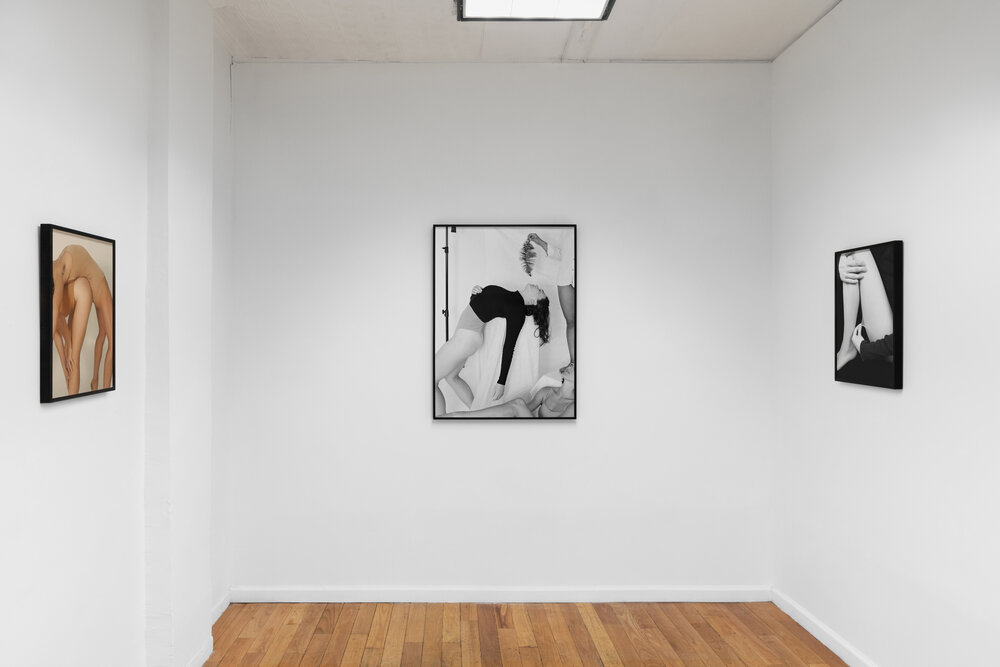 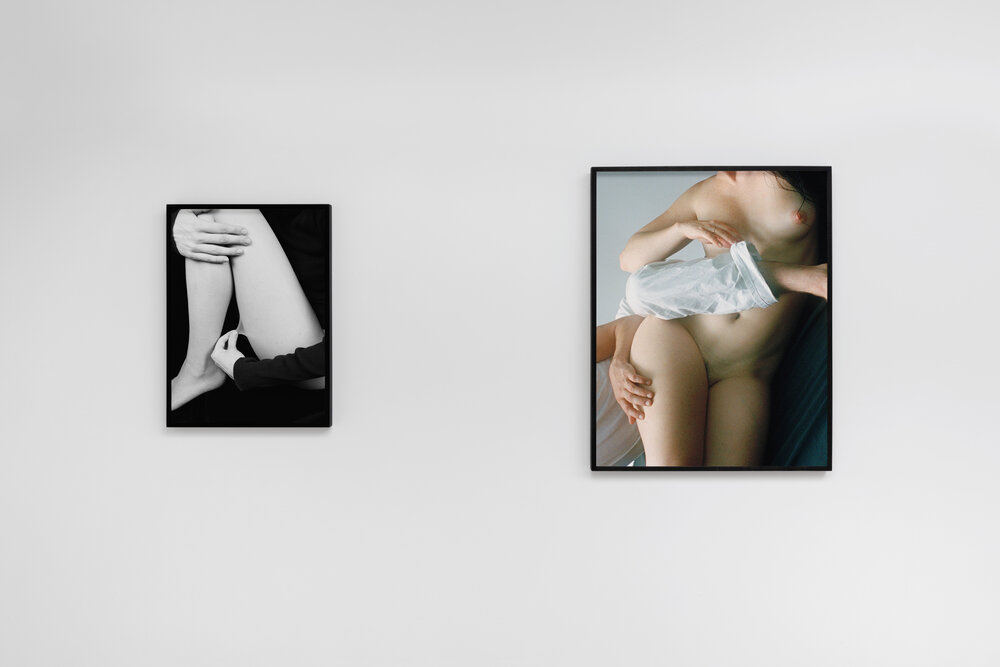 Between shoots, Jenna Westra writes down lists of directions she would like to explore with the models she photographs using an analog camera in her studio. They are bits of texts, vignettes, simple ideas for settings and movements, different ways that different bodies can meet and interact. Westra’s models are often dancers, who, she explains, have a good understanding of their body and how their body moves, who are comfortable being in front of the camera, who are always moving and trying things even if they are not being directed.

The pieces of descriptive texts thus meet the models’ will and movement, choreography meets chance and accident, the process leaves room for gaps between words (a woman leaning back while a hand is dangling a feather above her head) and image (the black-and-white tones are so soft, the white fabric draped over a pedestal she leans on is rendered on film as a subtle gray, as is the wall, as is her skin, but the black of her long-sleeved turtleneck is rich and fills the frame. Her eyes are open, focused on the feather). Those gaps are not in details, but in tension, the feeling that something is off, or left out of the frame, that action is decisive. The result feels casual, often spontaneous: these are women being creative, interacting, touching, feeling comfortable with one another.

The photographs document these moments of encounter, and create a space for women to inhabit that feels free, youthful, and feminine. Gendered, but not overtly sexual, and conscious of being seen, still free from specific kinds of sight. Dancers (Backbend), 2020, shows the bodies of two women encased. One woman bends forward and the other, facing the opposite way, leans back so that her back aligns against the other’s. They both wear leotards in shades of nude so close to their skin that they are almost nonexistent and the curves and contours of their bodies perfectly match, nesting one body in the other. The lack of detail in the photographs often taken indoors and against neutral backgrounds, with a prop or two, and very few other signifiers, makes what is feel momentous: the smallest things—a tan line, a lock of dark hair, an armpit—join the gesture in the creation of a scene that feels endlessly intimate.

Six of the seven photographs in the exhibition were taken in the studio, with one outdoor picture, of lovers in a park, shot from afar with a long lens. The materiality of analogue photography, which defines Westra’s work, is here palpable because of the grain that results from cropping and enlarging 800 ISO film in the color photo. There is no information about the couple: the photo documents a man, his back to the camera and his arms around the woman in front of him, whose hands are crossed behind his neck. A small scrunchie around the woman’s wrist feels like a detail so specific to her, as if it becomes a stand-in for any kind of knowledge about her, for all narrative about them. What Westra stages elsewhere in her photographs—intimacy, familiarity, touch—is found by chance here, in afternoons. —Orit Gat, September 2020 via Lubov NYC

Afternoons is on view at Lubov NYC through November 22, 2020.