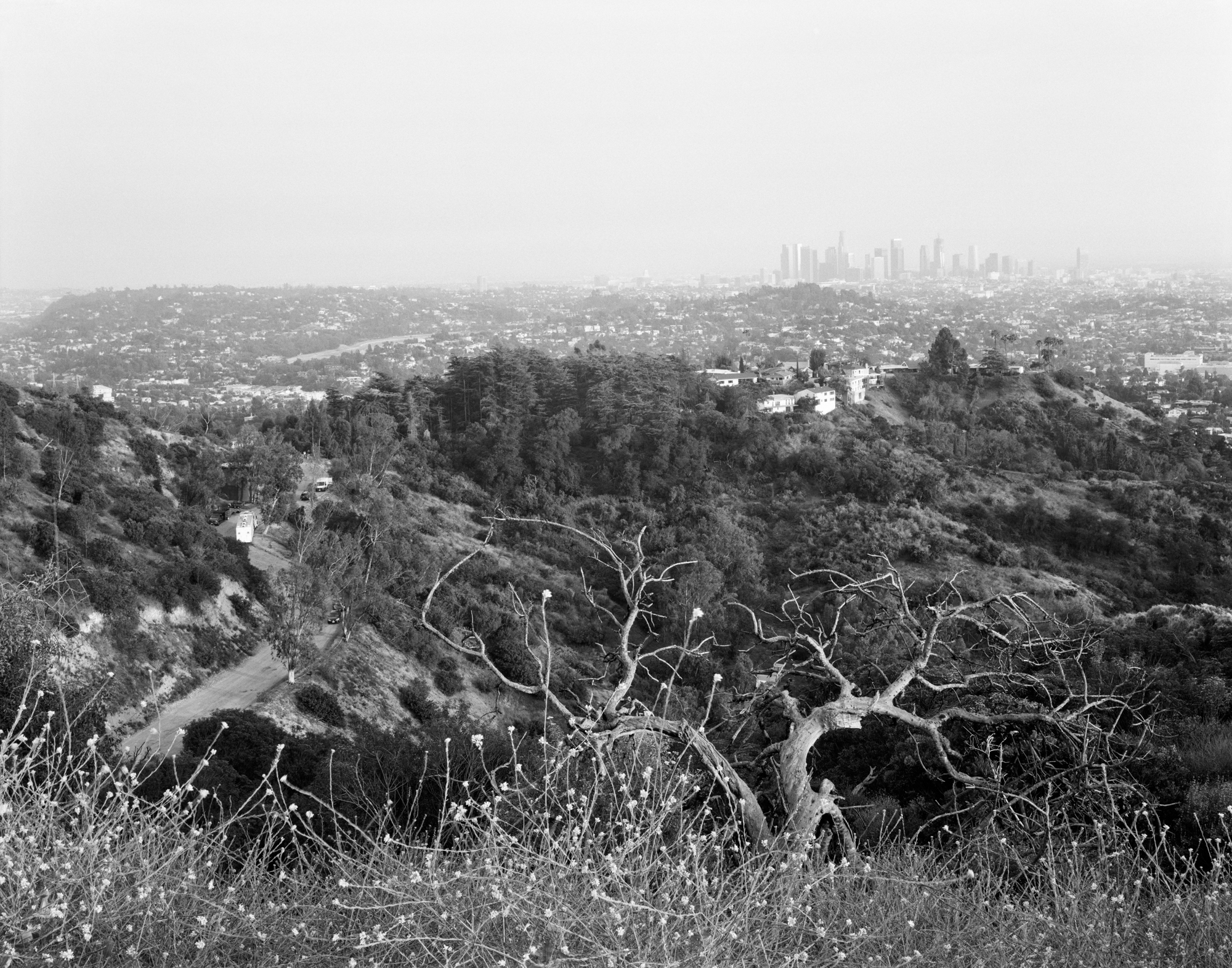 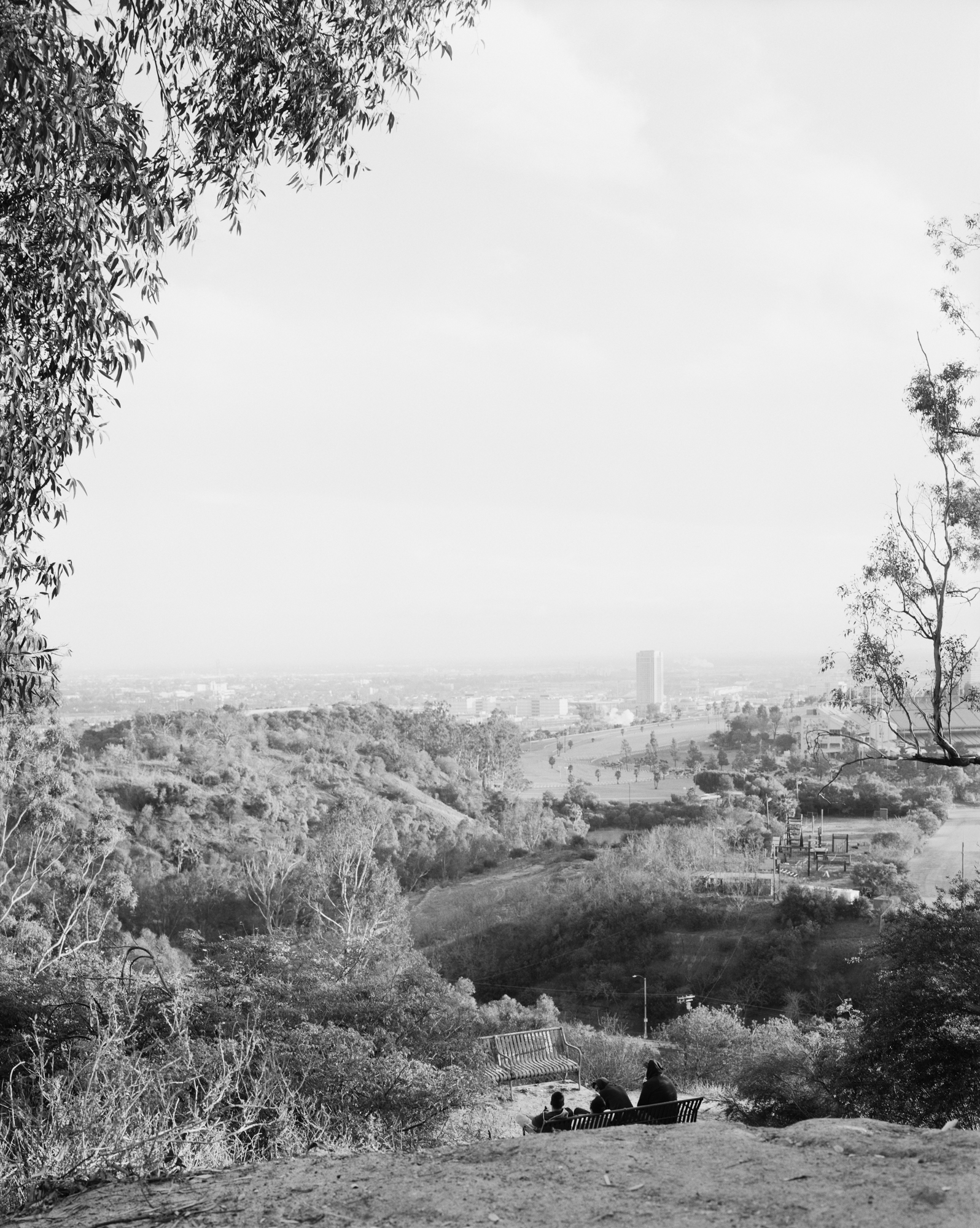 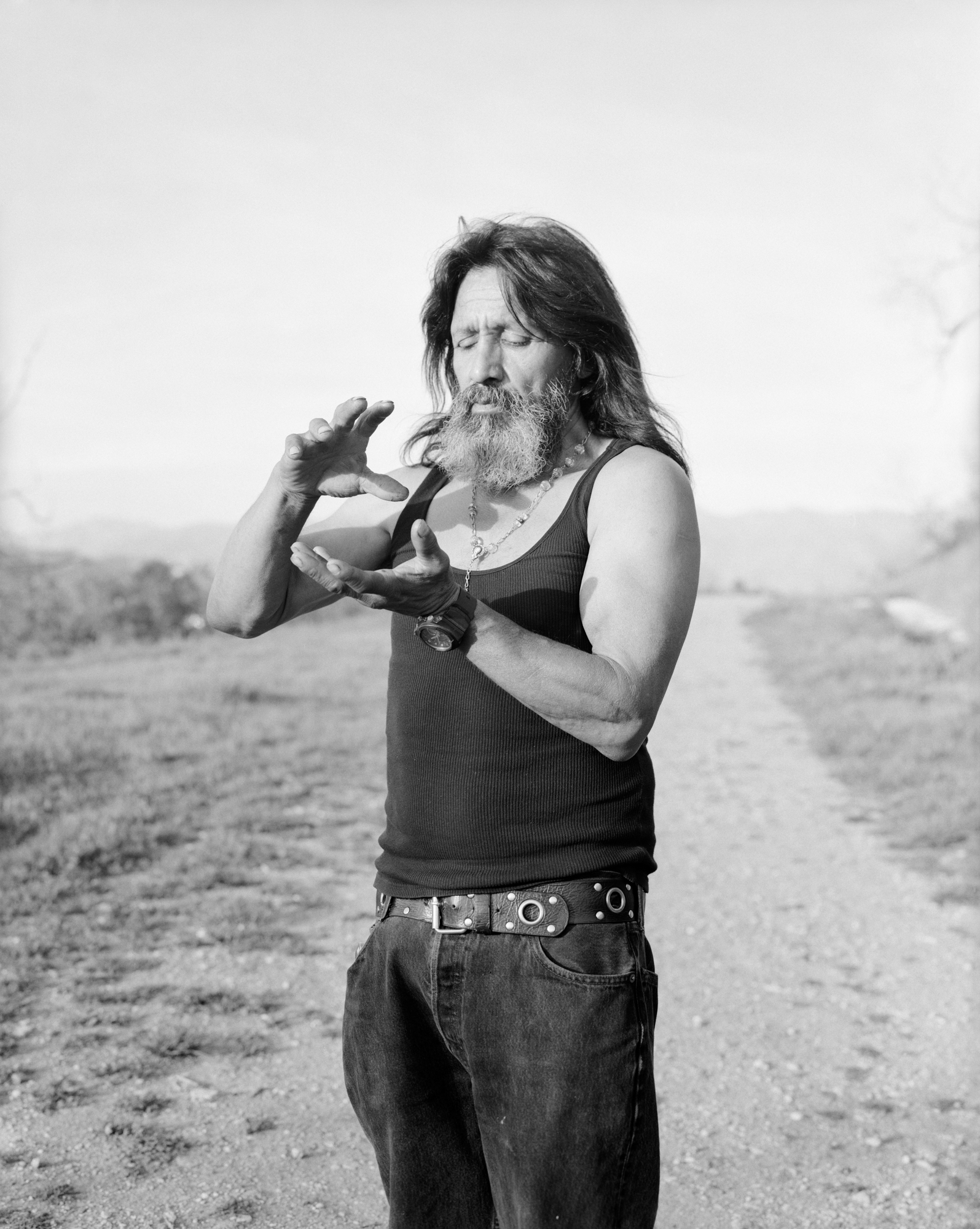 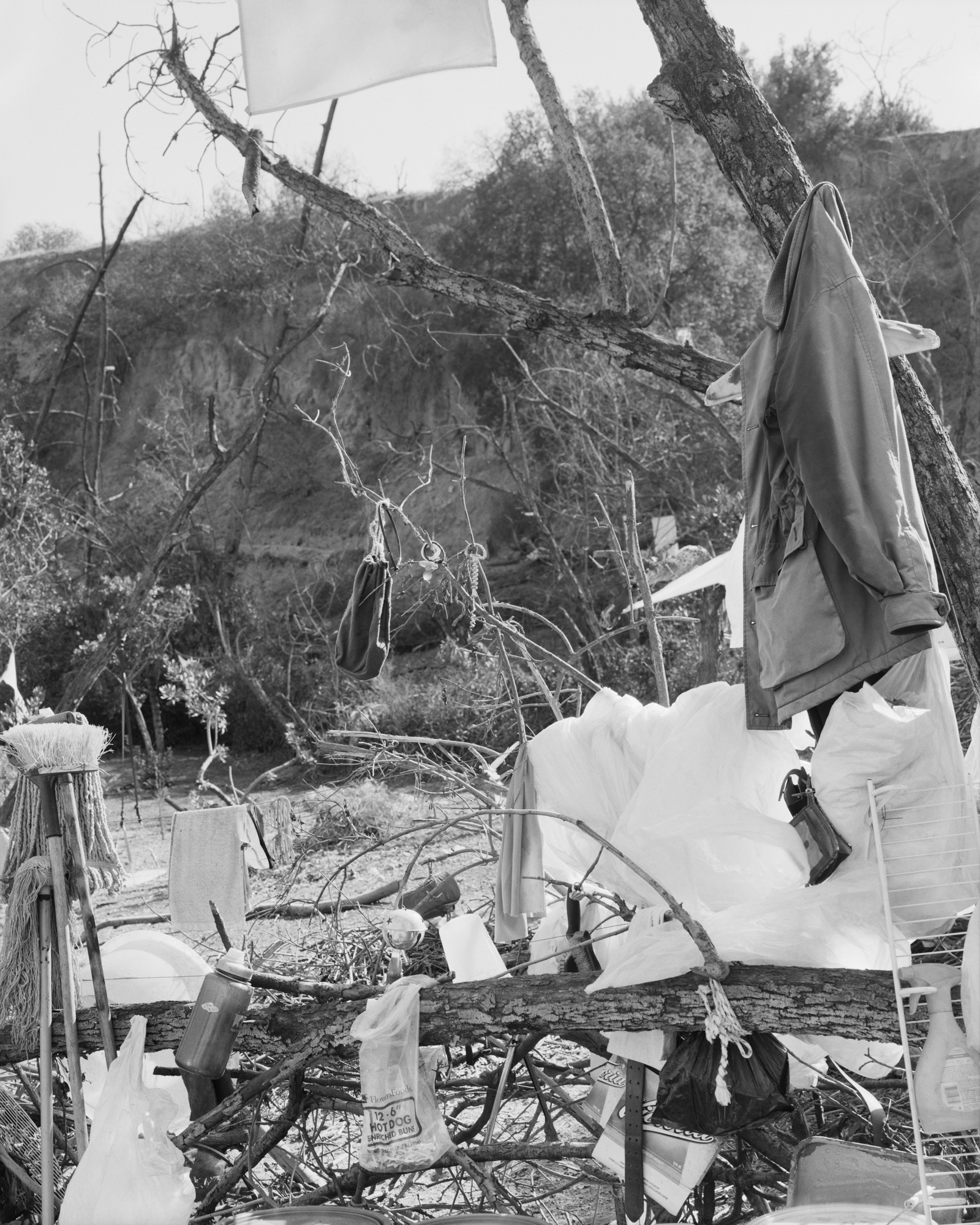 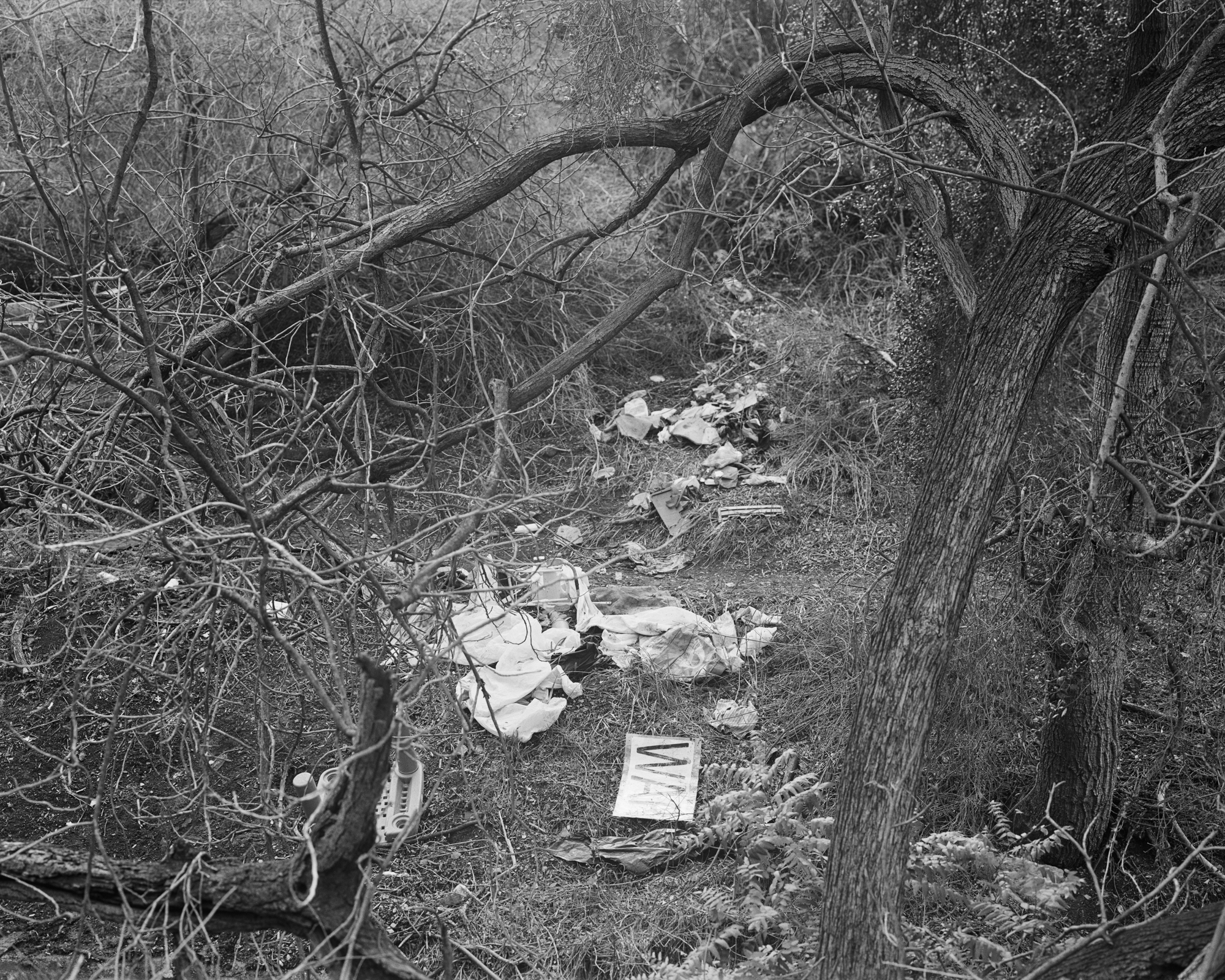 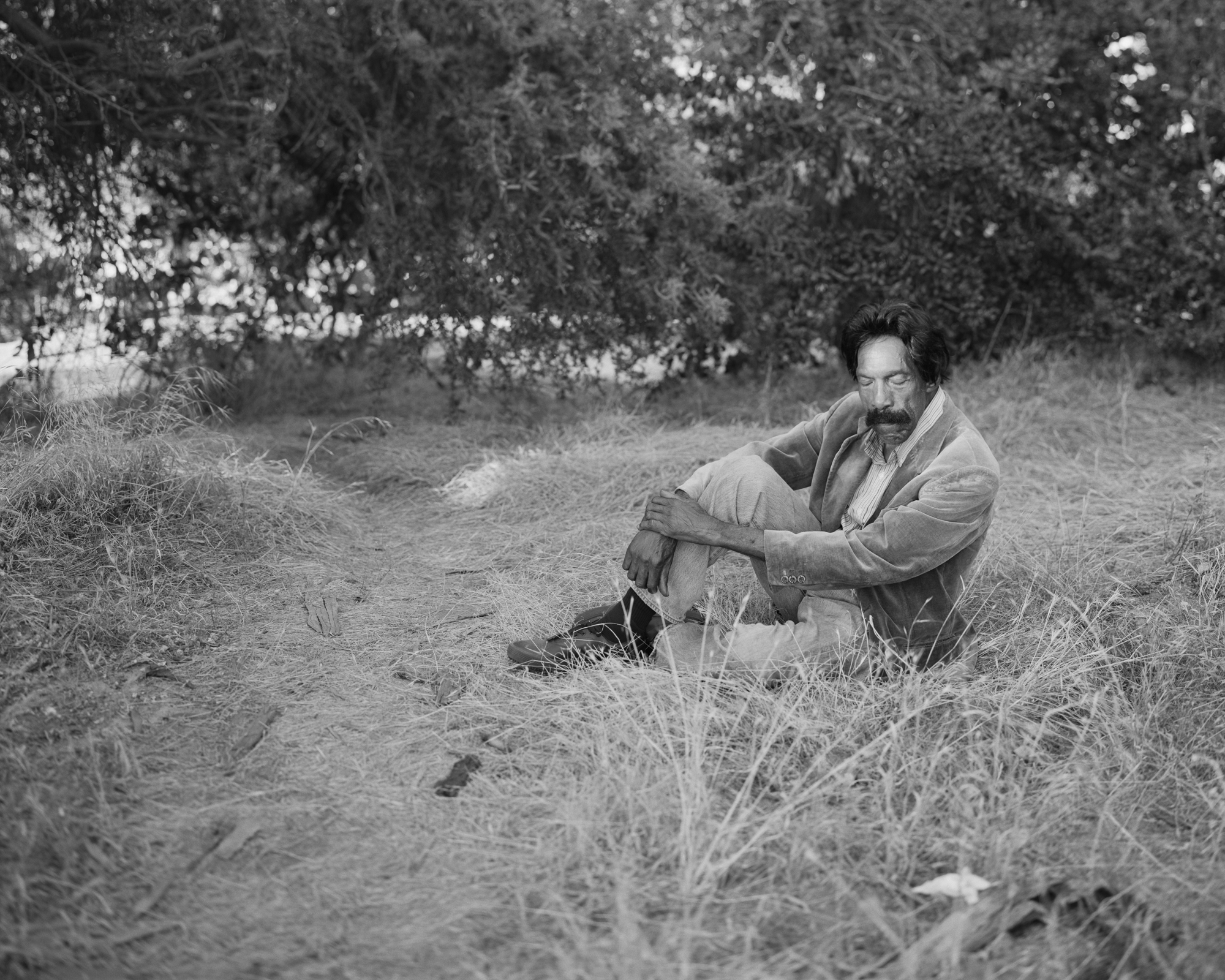 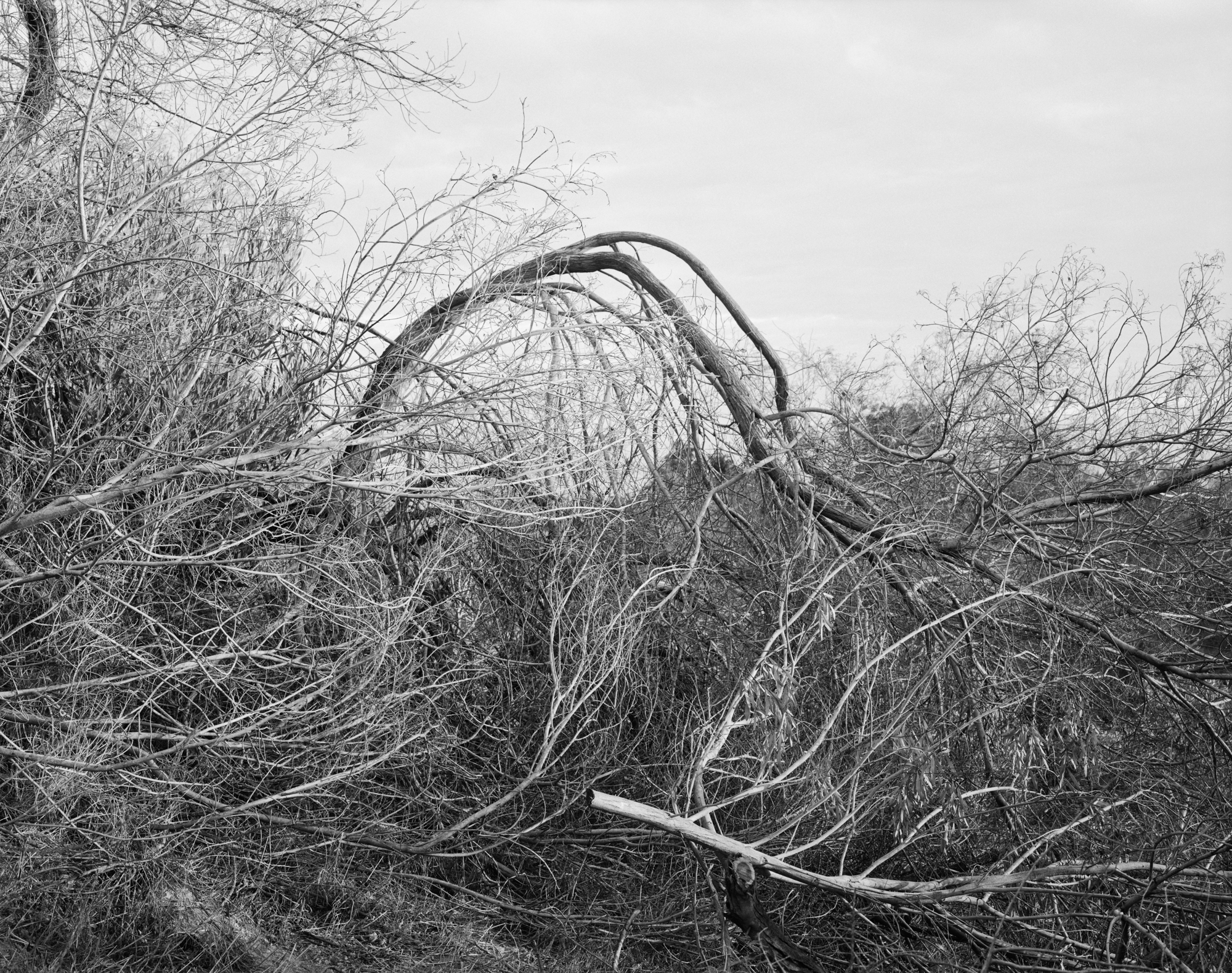 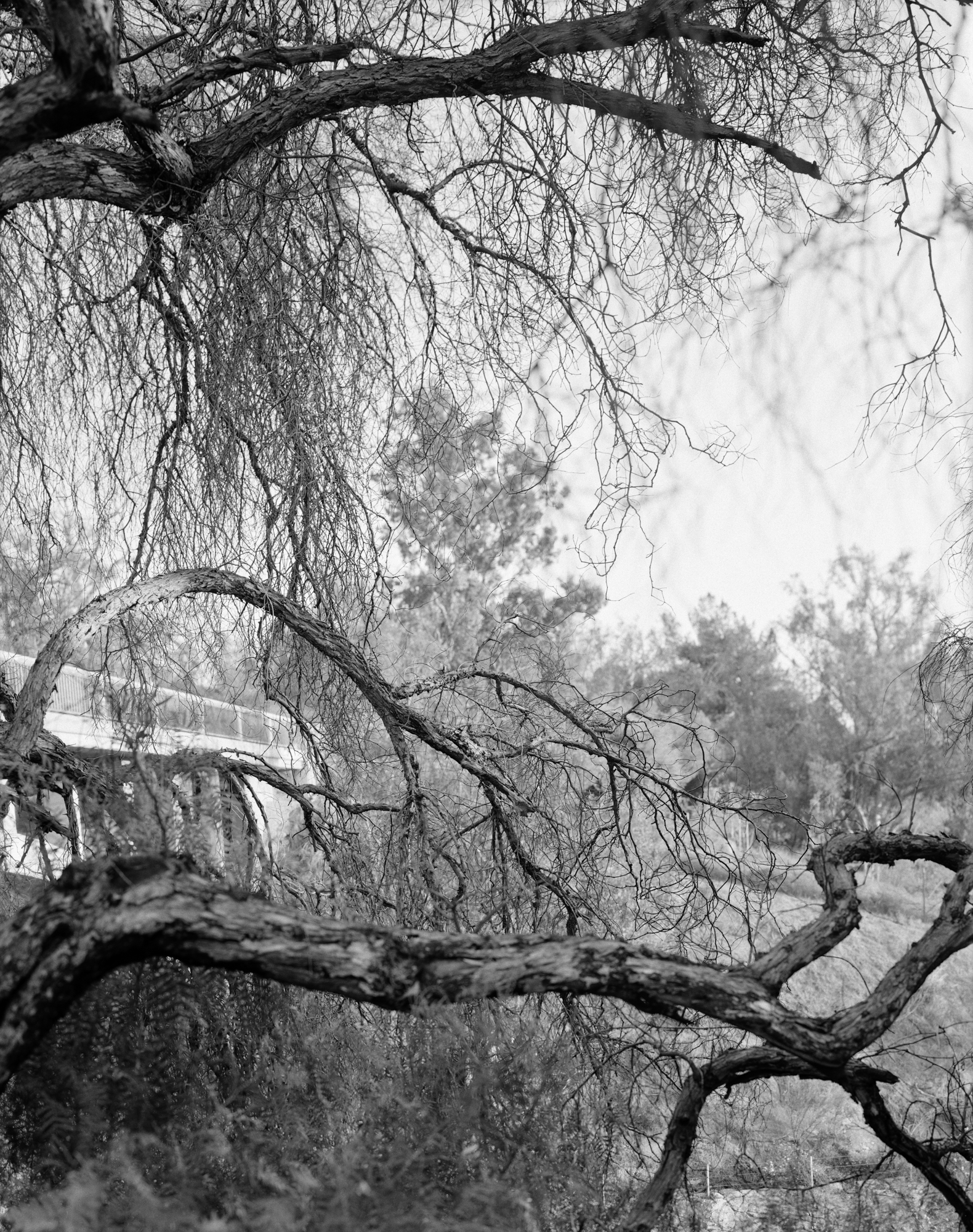 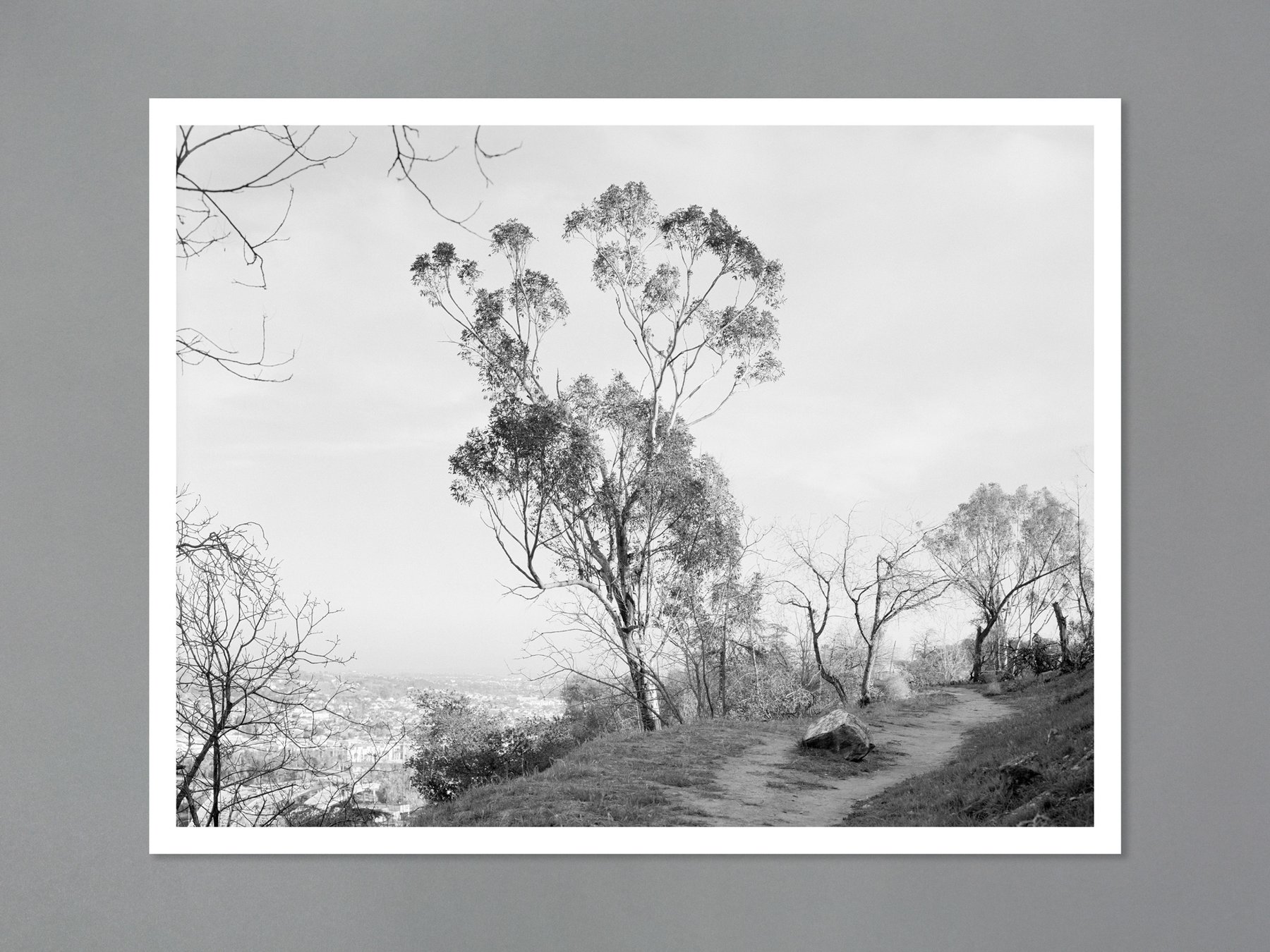 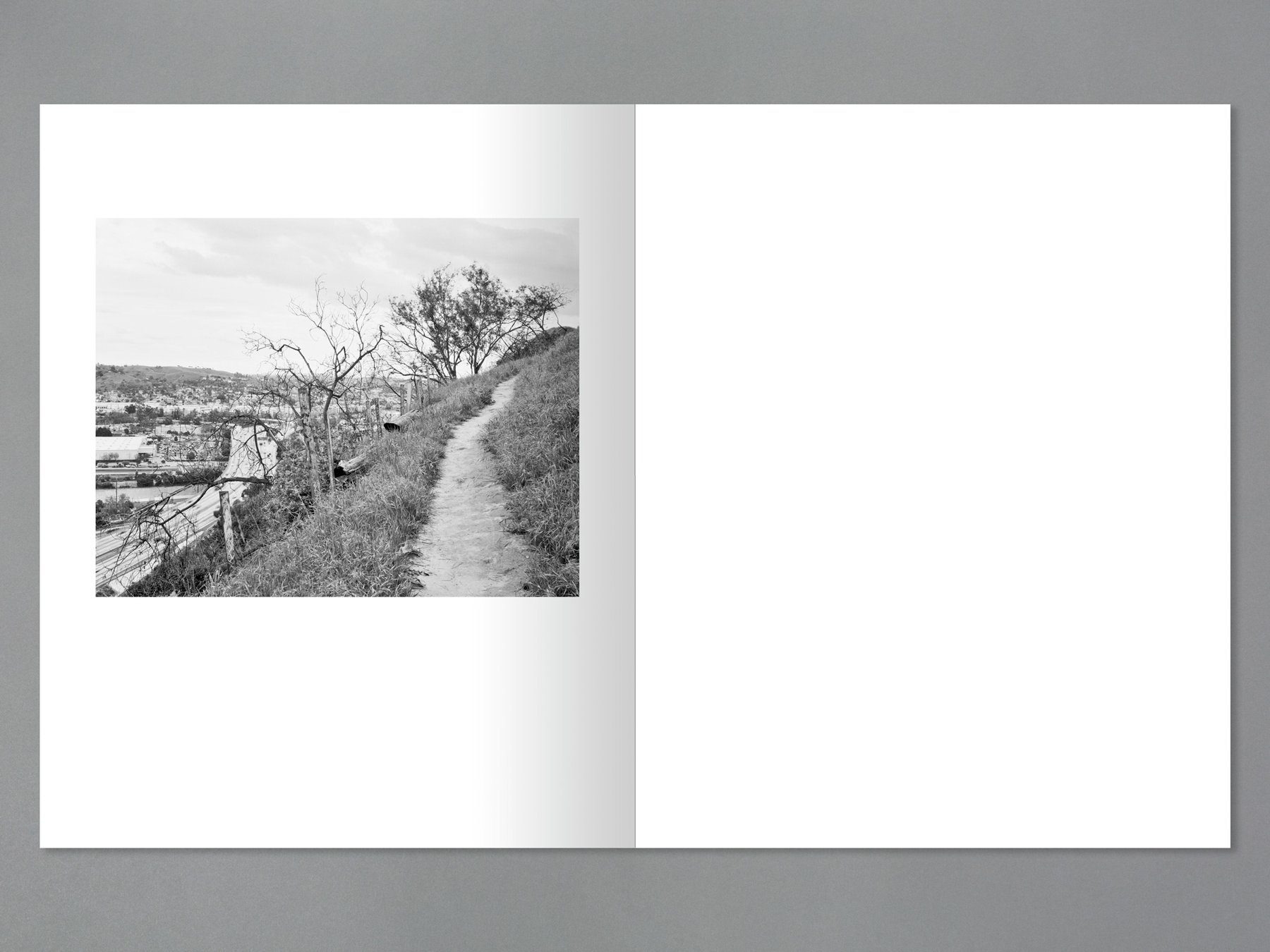 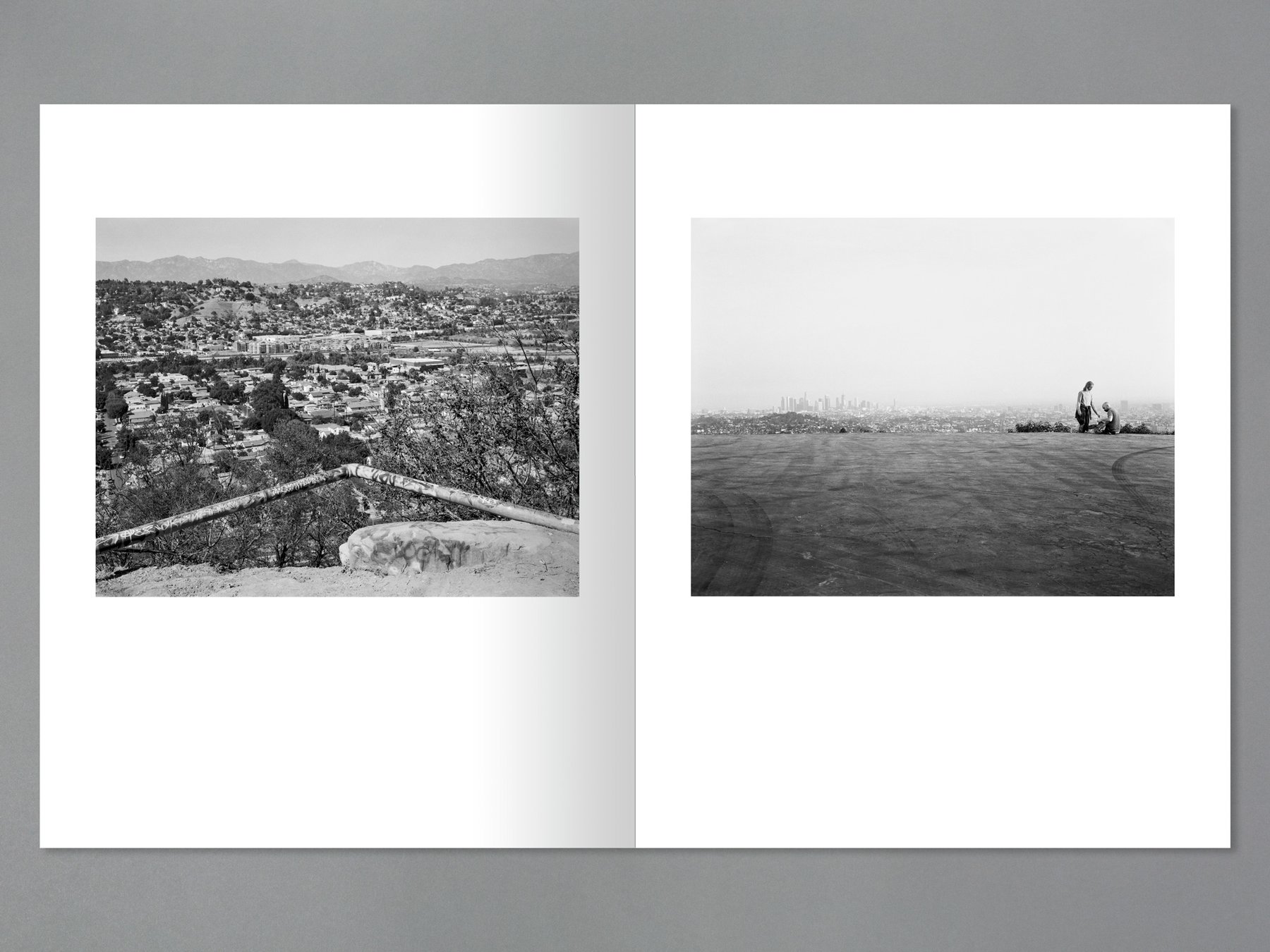 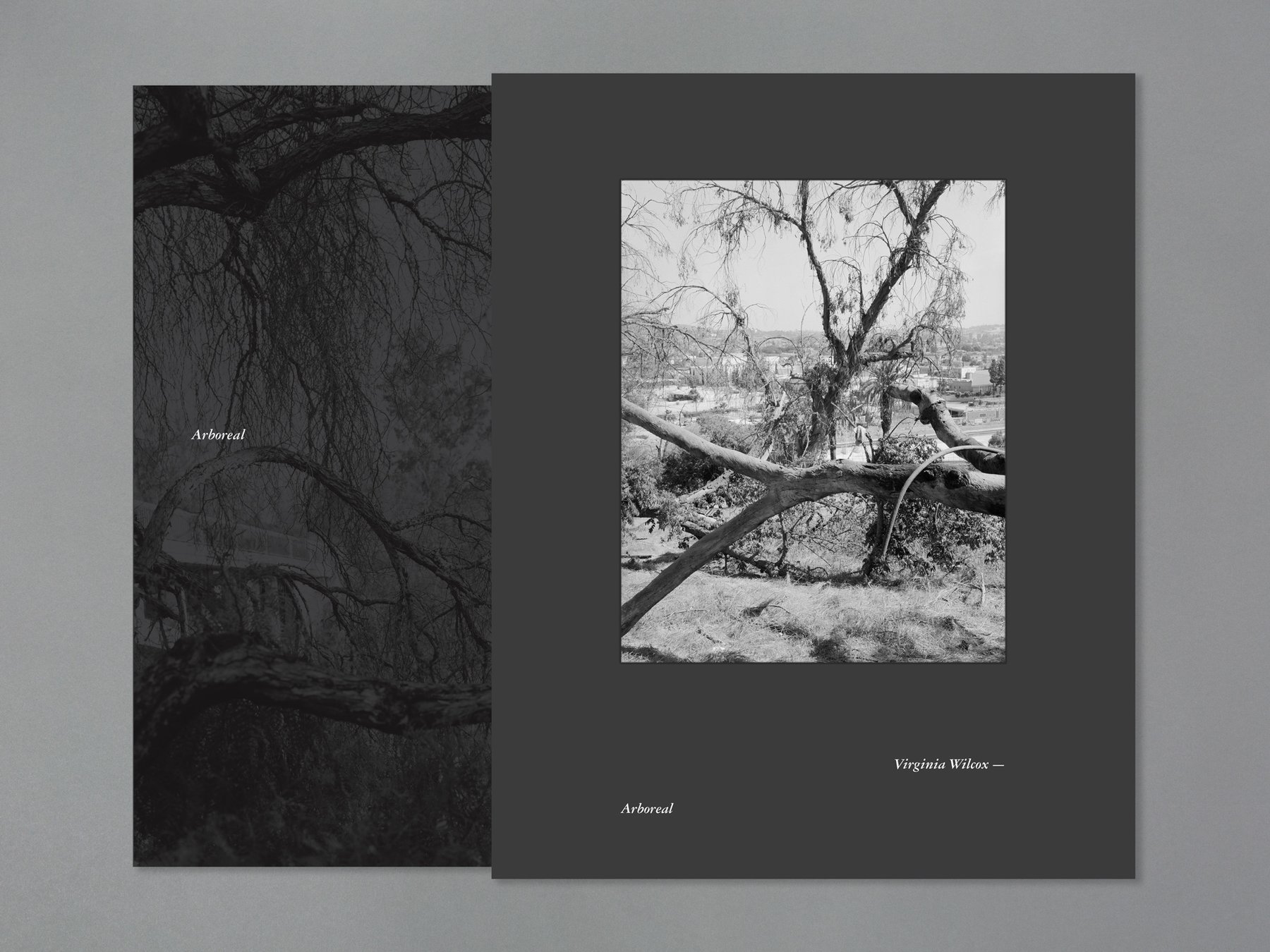 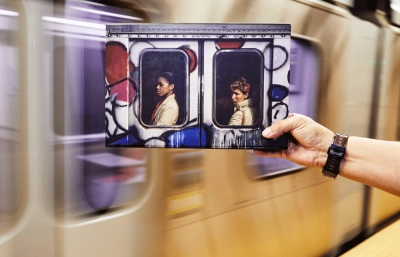 One of the most pictured places in the world, Los Angeles sees itself portrayed in images almost at the same rate it actively churns out more pictures of itself. Virginia Wilcox has managed to find a vantage point from which to look at the city from the outside while remaining on the inside. The photographs in her debut book, Arboreal, published by Deadbeat Club, are a view of Los Angeles through its parks. Not of its parks, of its trees, people, and skyline, but through them. They are not transparent, but quite the opposite. Looking through reveals everything in between; in between the branches of the trees, in between a man’s hands, and in between the pavement and the skyline. A skyline through which, reflected in one photograph of a mirror leaning against a tree, Los Angeles literally peers back at itself. The urban landscape and its remaining wilderness are left to consider each other and the tenuous co-existence they find themselves in.

Alex Nicholson: Can you pinpoint a specific moment that made you consider the potential of a series focused on the landscape of Los Angeles parks?
Virginia Wilcox: Like most of my projects, Arboreal is the product of wandering and looking. I started making these pictures during the first year of my MFA program at the University of Hartford. I initially drove all over the city making work in parks, from small flat parks and trails in The Valley overlooking residential housing to seemingly endless parks that offered views high above the city. I became transfixed by the wildness of these larger elevated parks where I felt a tension between the beautiful, formal landscape and interruptions of everyday objects like sewer drains, concrete pathways, and trash, all reminders from the sprawling city below. Once I had identified what called me to these places, I couldn’t stop going back.

Prior to that how and what were you photographing? Were you searching for a series or simply photographing what caught your eye and letting something grow naturally?
I have always considered myself a monogamous, project-based photographer, meaning that I work on one project at a time, and become fairly consumed by it. Each of my long-term projects has involved a consistent process: a place catches my eye and I wander around with or without the camera, simply observing. I start to shoot with no prescriptive subject, and upon processing and scanning the first 50 or so negatives I start to understand how the project is organically taking shape. 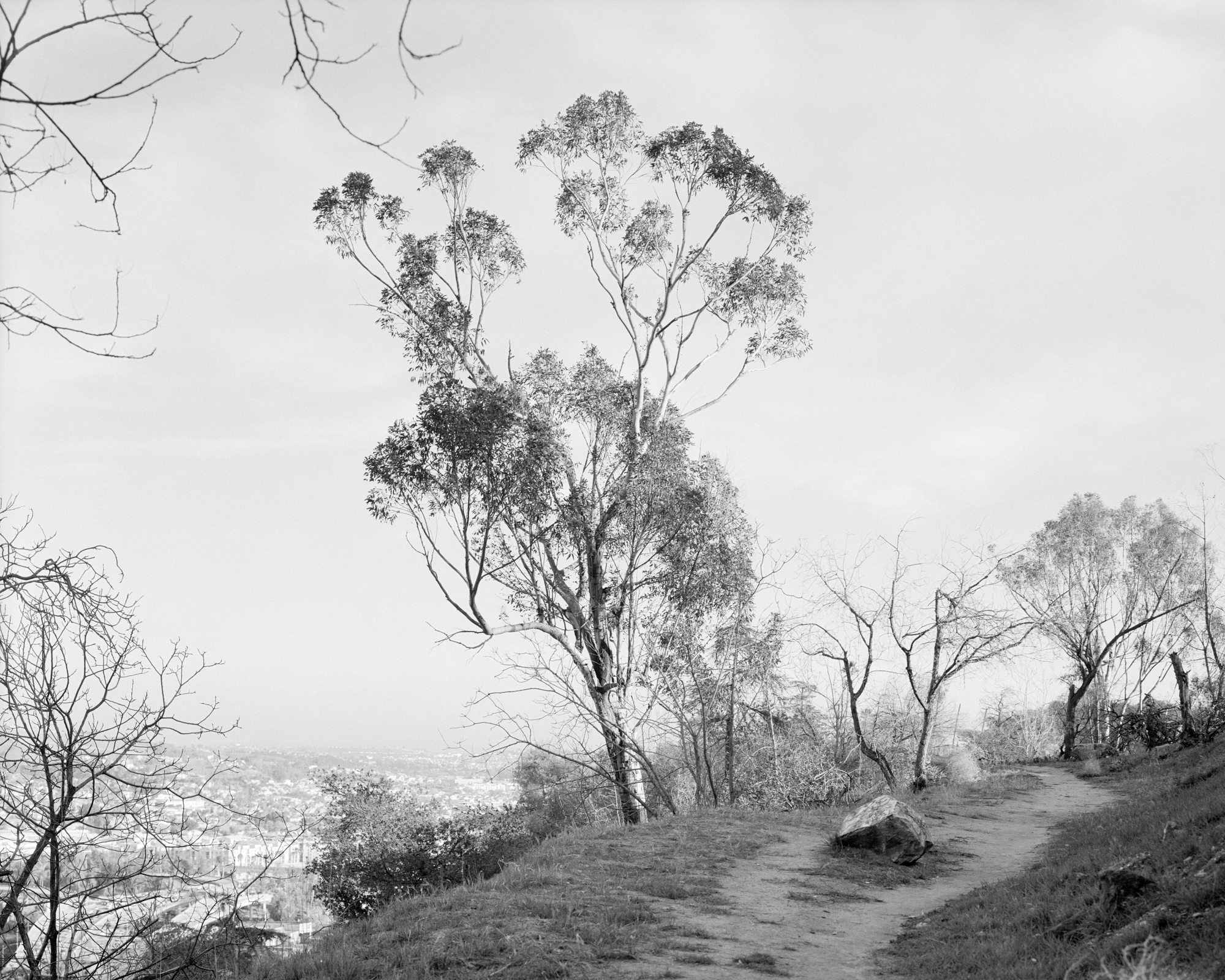 Arboreal has been in the works for a while now. I find I go through these cycles of being excited about photos I'm taking, to really sick of looking at them, to excited again, to doubtful, and back again... What has been the experience of working on a project over an extended period of time?
I completely relate to that. Because I have been shooting this project for years, I have gone through many phases with these pictures. I fall in and out of love with certain images and obsess over new ones. I made an artist book of Arboreal in order to graduate from Hartford in 2017. That was a very different iteration of the work, consisting solely of landscapes. After graduating, I felt I could go back into the park and shoot more organically and without judgment. My newer pictures took on a more voyeuristic tone, focusing on human interactions with the landscape. I continued to shoot in this way for over a year but didn’t feel like the book was cemented until a few months into COVID when I photographed Roger, my second portrait subject in the book. He and Jesse Jesus, the subject with the orb in his hands, felt central to the story I was telling. Once I had both portraits in the mix, Clint Woodside (of Deadbeat Club) and I were able to delve into the editing process. And, in the circular nature of things, some of my earliest images that I had initially overlooked made their way into the final edit of the book. There is something important about this process of hiding images away from yourself and falling in love with them all over again.

I've been thinking about the fun I had as a kid and what I do as an adult that is fun in the same way. What aspect of photography is the most genuinely fun for you?
Making pictures, 100%. I live in a giant city and am often too busy for my own good, but when I am out with my camera that frenzied feeling melts away. This has been particularly true while creating Arboreal. The chatter of the world below dissipates and I am able to devote my attention to what I see through the ground glass. I still hear the freeway, but it is a distant, muffled sound, and all around me are trees and dirt paths. With each trip comes a new discovery, whether encountering a tree with branches bent over at the perfect angle or seeing a familiar scene in midday light.

Virginia Wilcox's Arboreal is available for pre-order via Deadbeat Club.