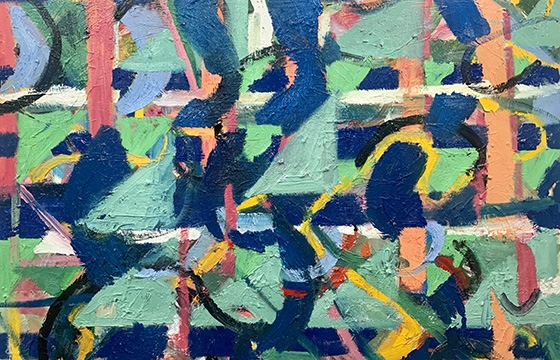 Painting collaborations are typically plagued by the inability of artists to let go of their own respective styles. Invariably, the painters end up grafting their independent gestures and motifs onto a single canvas. While we can call the resulting artwork a joint effort, it doesn’t usually present the viewer with new revelations. As exciting as the prospect of a successful collision portends, it is rarely achieved. 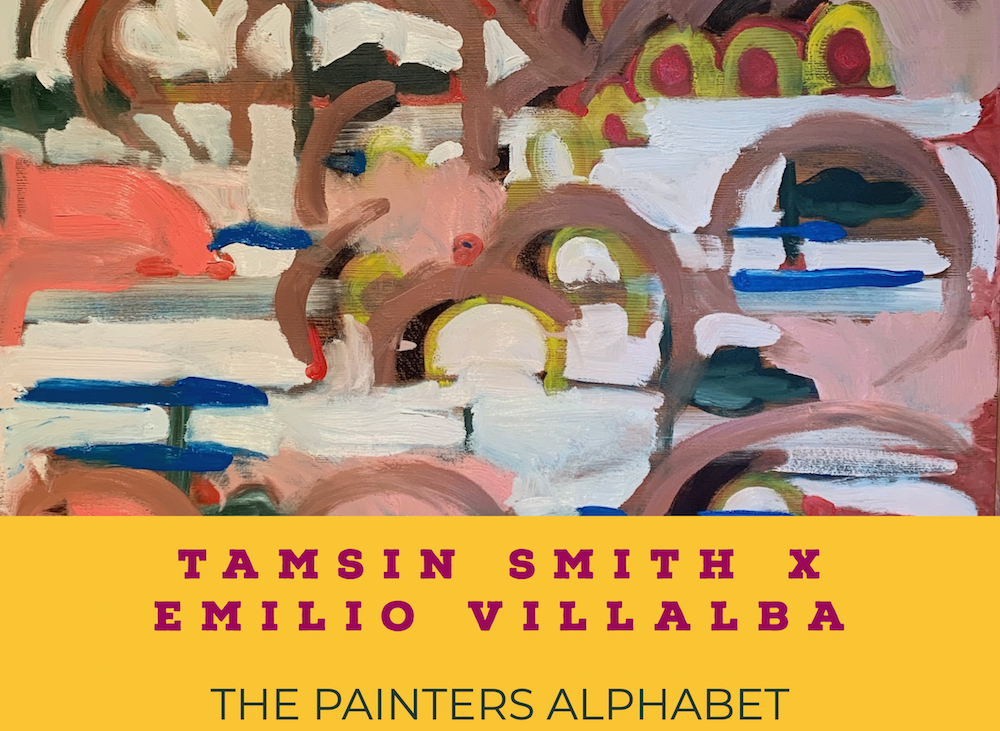 The joint work of Robert Rauschenberg and Jasper Johns in the 1950s immediately comes to mind. They each generally took one portion of the canvas as their own territory. This compartmentalization usually meant that one artist was dominant and the other subservient, in some cases appearing in only 1/5th of the canvas.

With the Andy Warhol and Jean-Michel Basquiat’s collaborations of the 1980s, each took turns placing their distinctive iconography onto a single canvas until they declared the piece complete. At the end of the process, once again, the viewer could easily parse which artist rendered which part. 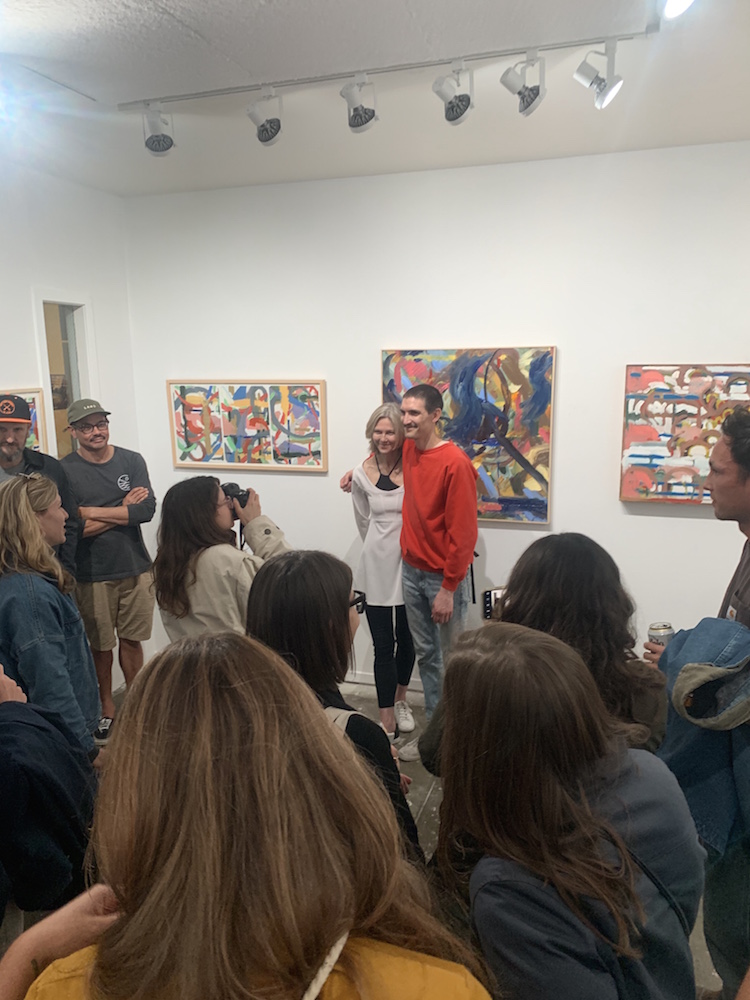 Overcoming the inherent limitations of collaboration is what makes the work of Tamsin Smith and Emilio Villalba so exciting. In their recent show at Adobe Books Gallery, The Painter’s Alphabet, these two painters managed to let go of personal styles, in pursuit of more than the sum of their parts. Consistent with the historical antecedents, their efforts didn’t start this way. Smith and Villalba had made a couple of joint works, exhibited at Modern Eden Gallery earlier in the year. In these, the artists painted the objects and scenes they were accustomed to painting, in unison or close proximity to the other’s, upon a single canvas.

With time, this simple way of sharing space wasn’t satisfying to them. They wanted to find a shared language and were willing to take the risks necessary to get there; namely, that they exposed themselves to alienating viewers who had come to appreciate their individual work by presenting something wholly new. The upside was that they would be forging a novel and unified body of work. 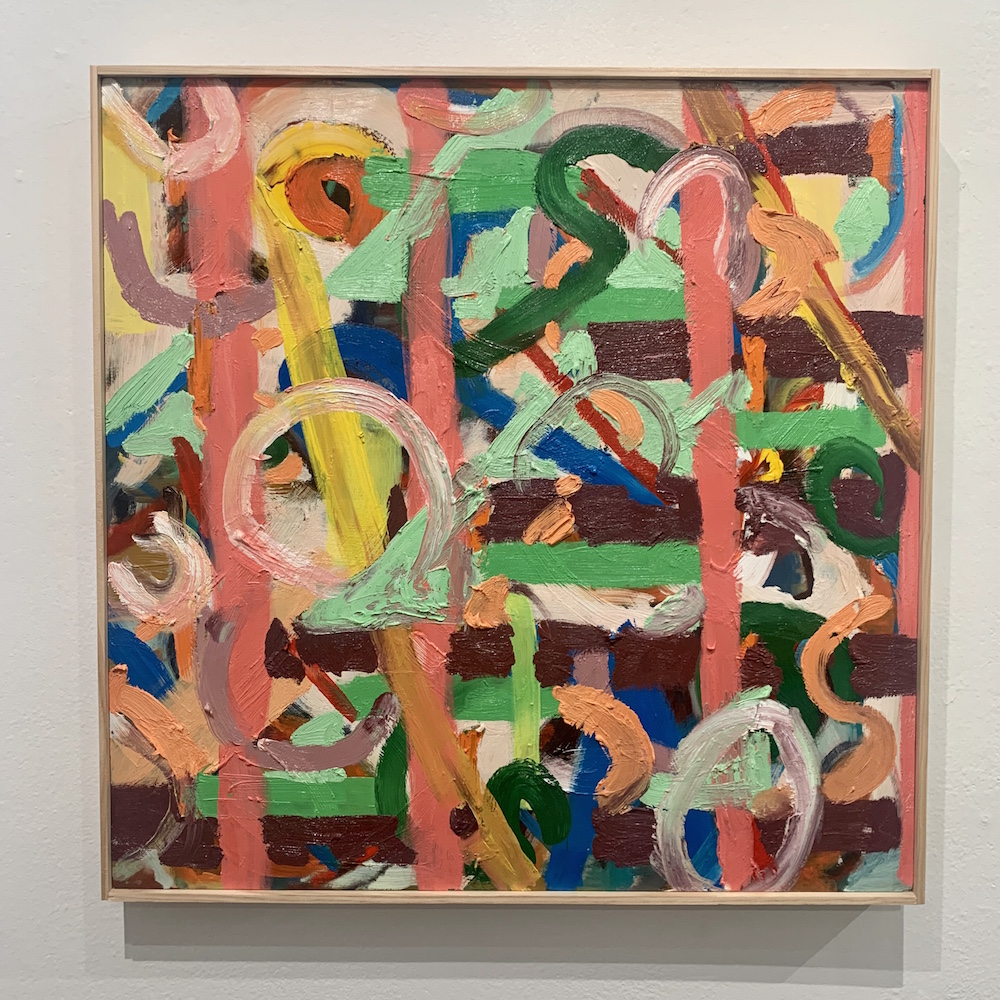 In the case of Smith, a poet who has expanded creatively into painting, her work favors idiosyncratic figurative interior spaces, colorful landscapes with thick brush strokes, and a loose abstraction harnessed less by geometric or hard-edge lines as with curvature. The more established Villalba has won a robust following by utilizing portraiture, particularly with distorted and blurred compositions. A deft painter of details, eyes, and objects, he doesn’t typically paint in full abstraction. Yet, in this series of 15 pieces, the duo abandon their singular habits and create a dynamic unifying vernacular.

So, how did they do it? Smith and Villalba implemented a painting regimen, which they call the “painter’s alphabet” It involves each taking turns working through a sequence of directional mark making. The marks –known to visual artists as a drawing alphabet– begin with vertical and horizontal lines, then diagonal lines applied in alternative directions, followed by “S” and “C” curves. 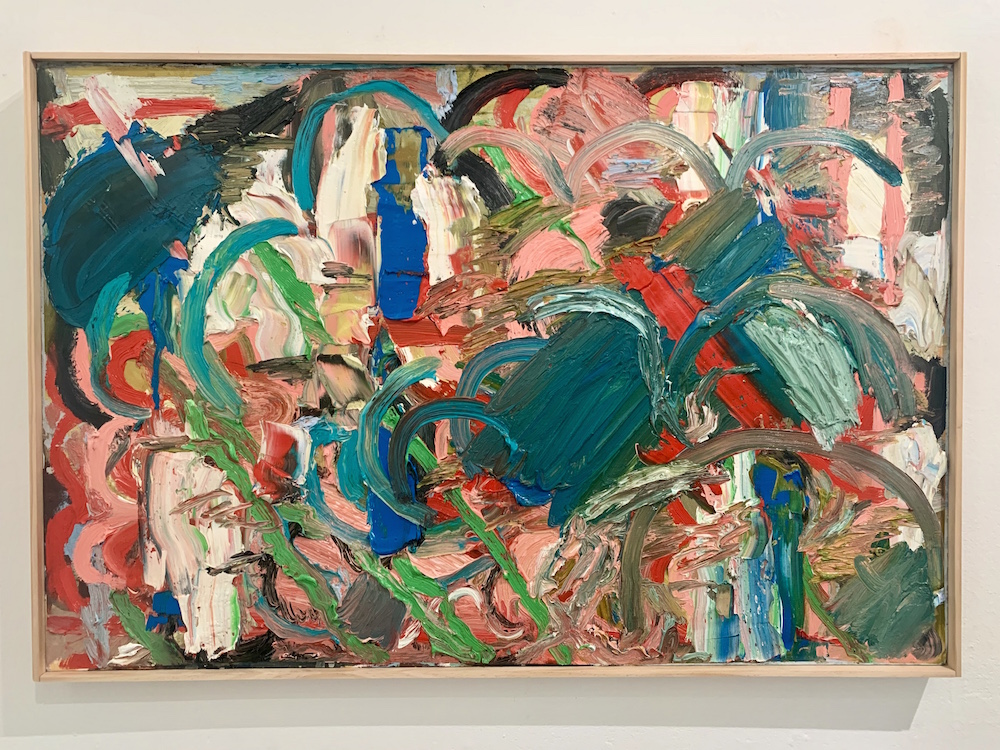 Each artist is present as the other paints, always working together and adhering to the set rules, leaving open determination of when a piece is complete. Cycling through the rotation of marks, they seek a place that satisfies a newfound collective aesthetic. In doing so, both artists own the finished product, so much so that neither can truly say “that’s my line” for a particular mark. As Villalba noted in a recent interview, “It’s impossible to get the painting you want out of it.” This comment underscores the extent to which they had to let go of expectations to really arrive at a fresh and unpredictable place. As Smith observed, “By removing the ability to lean on personal patterns or go-to skills of portraiture and figuration, [we] create[d] work that neither would or could have composed alone.”

On at least one occasion, the artists employed a dice throw to dictate the number of times a particular mark would be made. This inclusion of chance is reminiscent of Surrealism, which historically speaking, greatly influenced the New York Abstract Expressionist whose shadow Smith and Villalba work under. The dice were also consulted, at times, to dictate the rotation and orientation of the canvas. 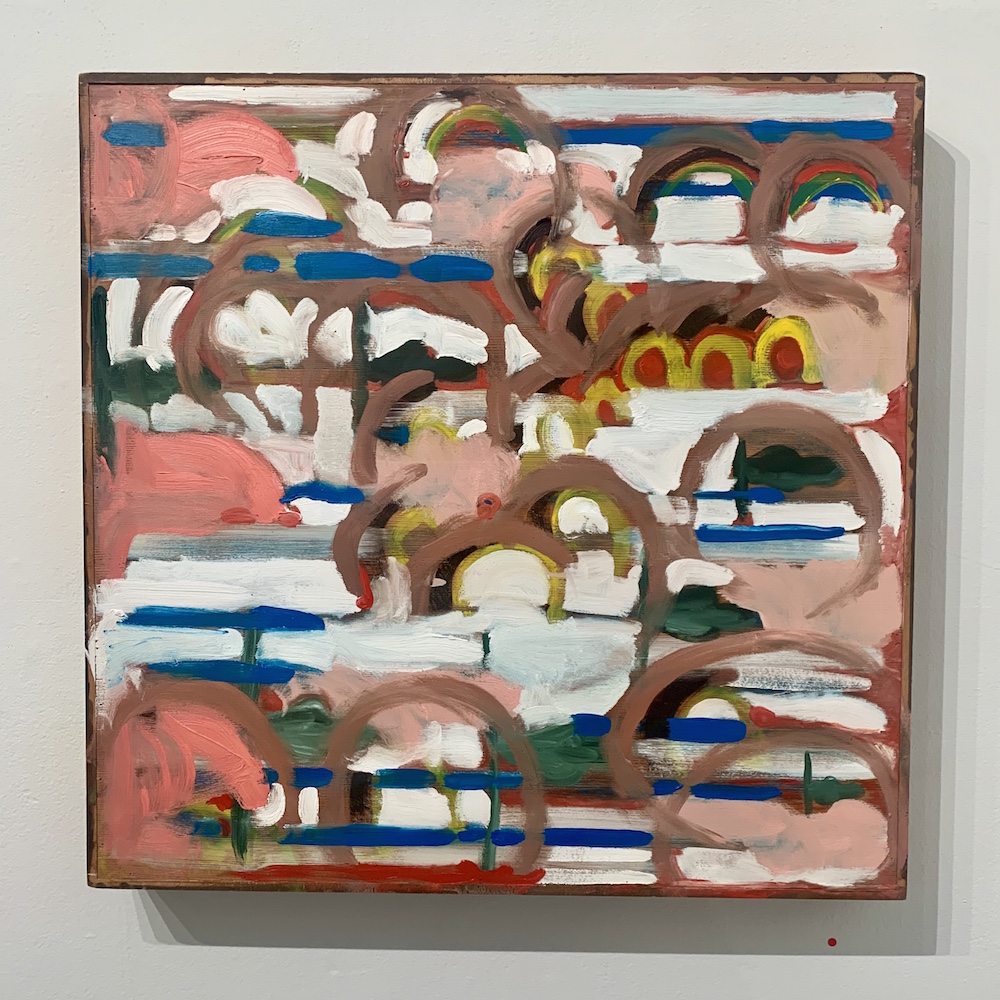 The resulting pieces are surprisingly unified. Speaking of the paintings, Smith likens the rules to reading a book of haiku, “There’s a similar format, even if each [painting] is evoking a different feeling about a different season. There’s a nice wholeness to them, even though each is distinct.”

The Basquiat-Warhol collaborations are noteworthy for their failure. What started as a collaboration between three artists (Francesco Clemente was initially included), was reduced to the remaining two painters taking turns placing their own marks and imagery over the works of the other. Warhol typically started a painting by using a silk-screened image, a logo or some commercially known imagery first, with Basquiat then writing text or directly painting over the imagery. 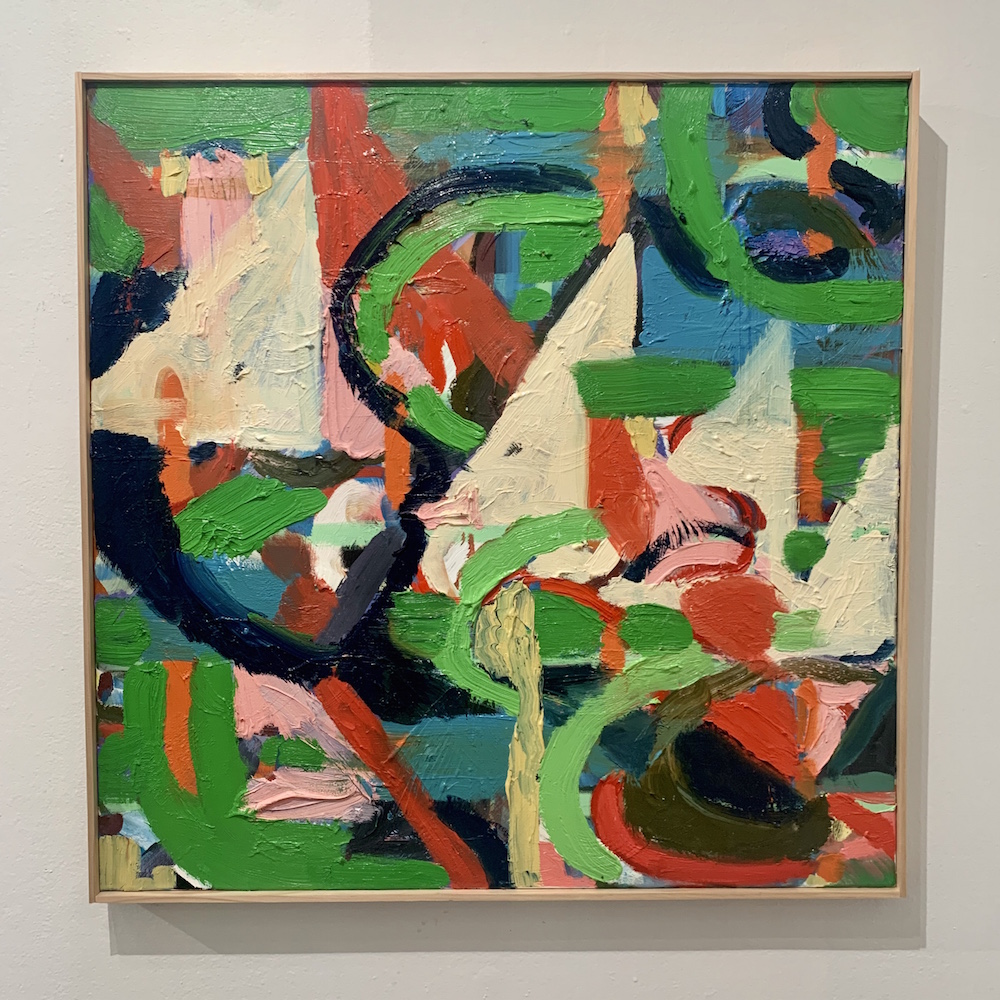 Basquiat and Warhol didn’t work at the same time on a piece, rather the surface was shuttled back and forth between studios. By the end of the effort, animosity grew between them, and the resulting work was not well received when exhibited in 1985.

In contrast, the Smith-Villalba collaborations occur with the artists alternating the first turn and refusing to rely on established patterns or iconography. Always present when the other painted, any reaction either had to the other's brushstrokes would be sorted out in the moment. Although the rules set parameters, it didn’t wholly make the process deterministic. The number of gestures, placement of those marks, and the color choices, kept the process hinged to a freedom of choice the painters needed to fully express themselves; and yet, the painters achieved a pattern of something beyond themselves. Their friendship has only grown as they’ve worked within the confines of the self-imposed rules they challenged but followed. 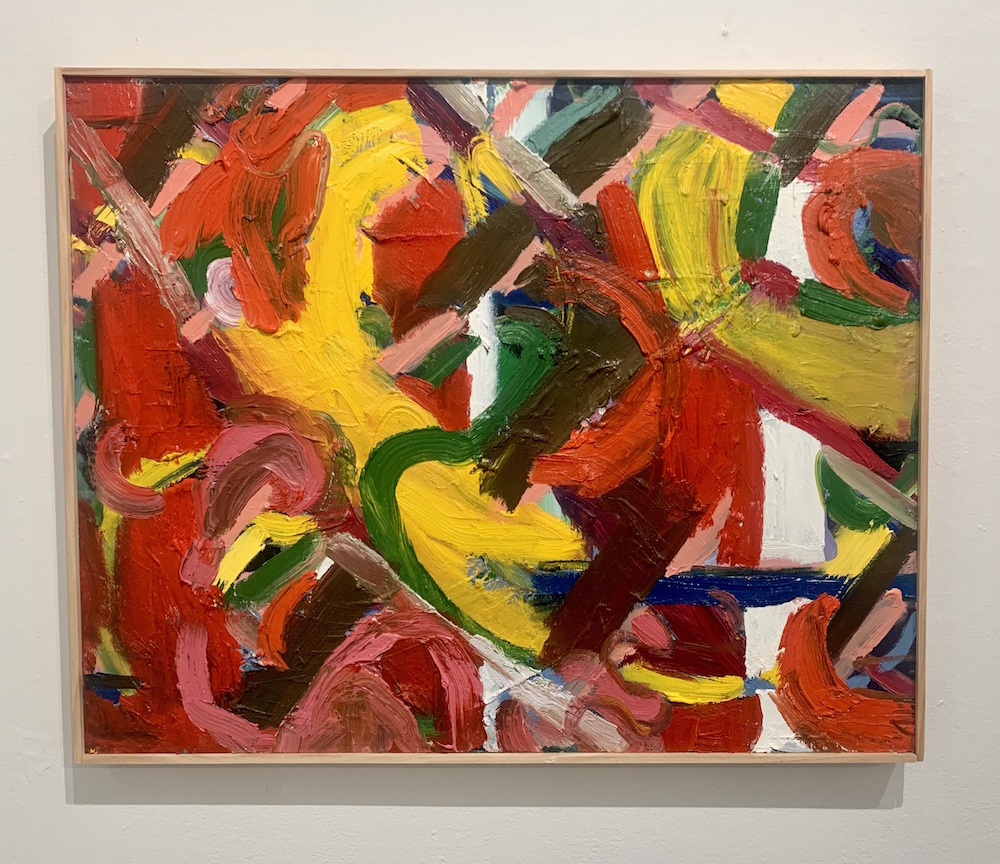 In the end, the Smith-Villalba collaborations refute the popular myth of a solitary painter alone in a studio facing off against a canvas. Their approach, which could be called a forced unlearning, offered an entryway into a language that actually takes two to be communicated. The dynamic energy and call-and-response harmony is palpable. Confident, even exuberant abstraction and mark-marking results. Keep an eye out for future exhibitions by these artists. The pieces are numbered suggesting this is only the first chapter in what will be an ongoing series. –Matt Gonzalez

NOTE: quotations by Villalba and Smith are from Waiting to Dry Podcast: Episode #84, Emilio Villalba & Tamsin Smith, “No small talk on the canvas," September 17, 2019; and the promotional announcement for the exhibition (written by Smith).