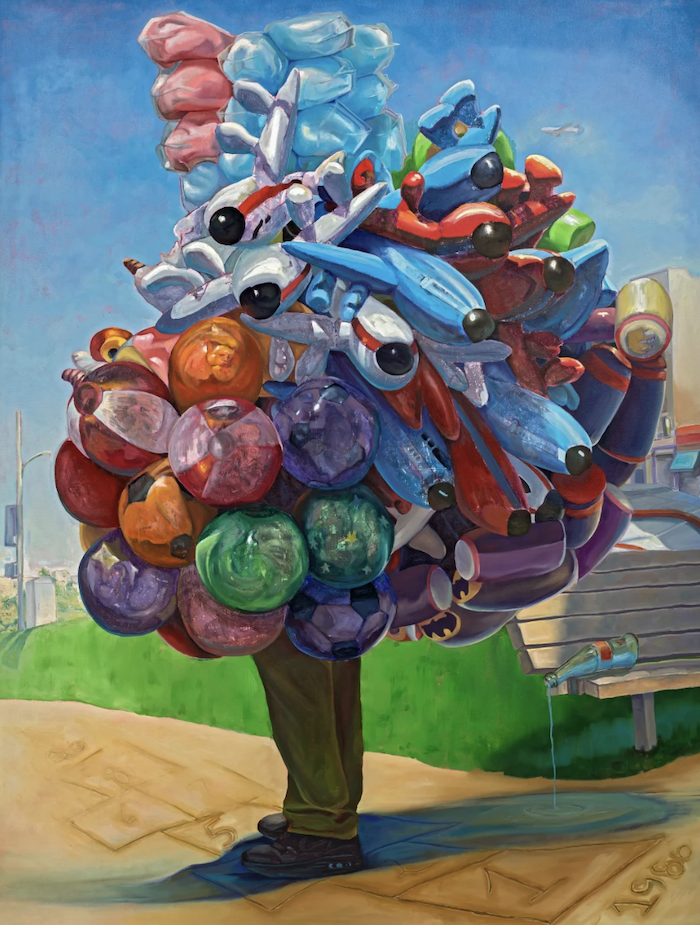 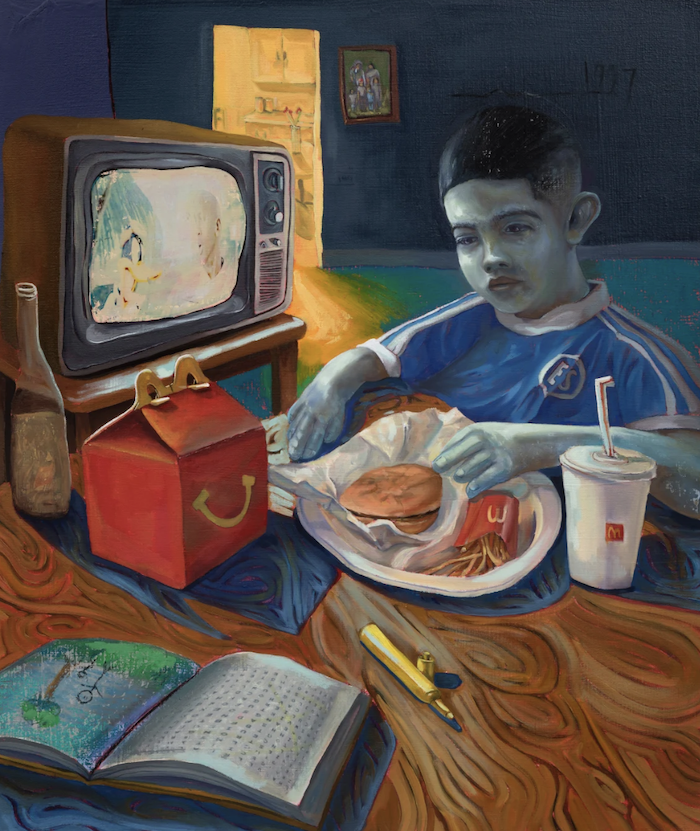 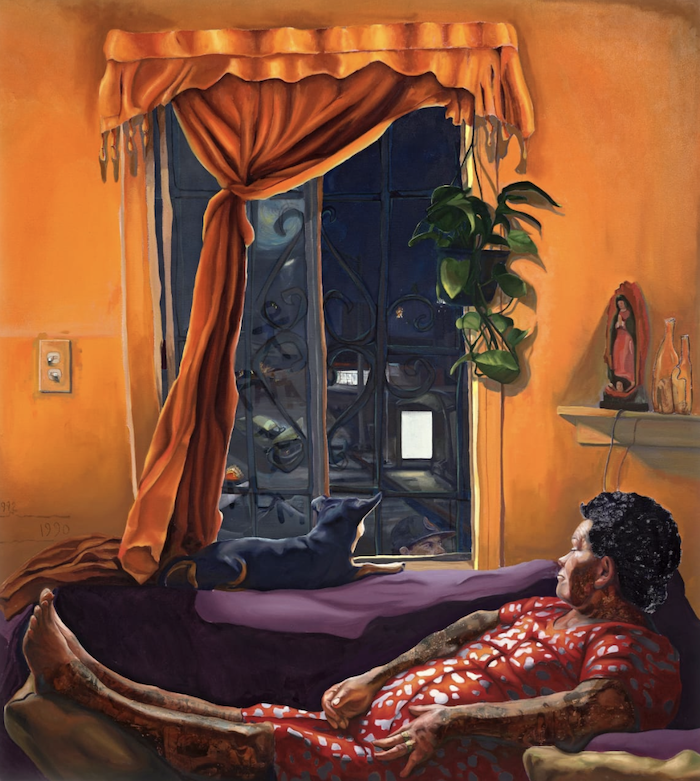 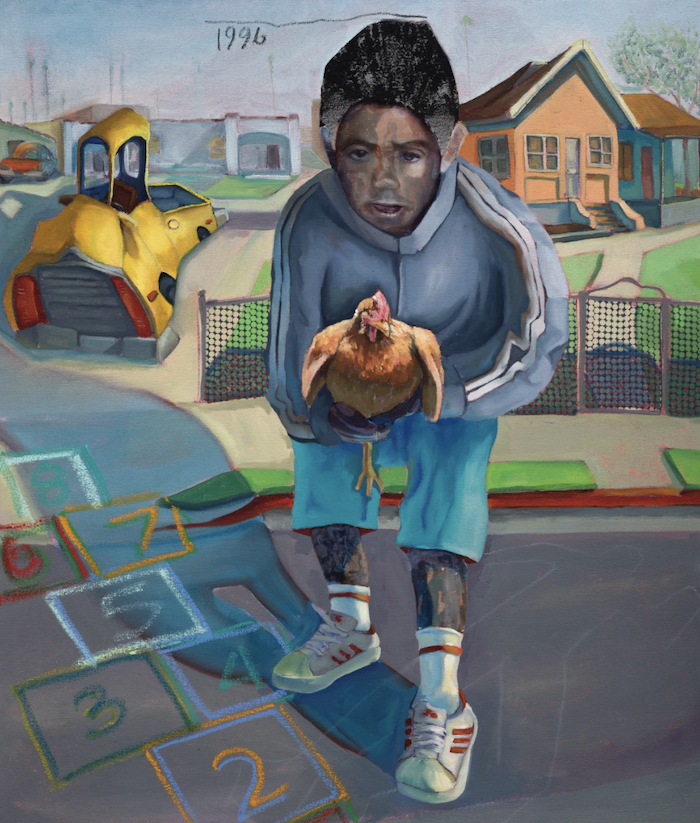 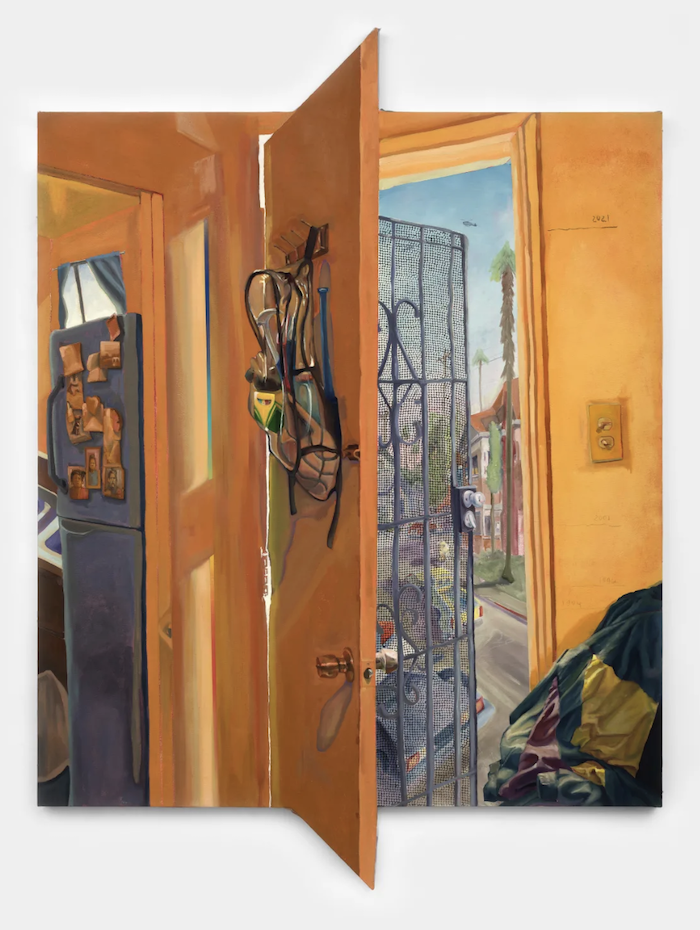 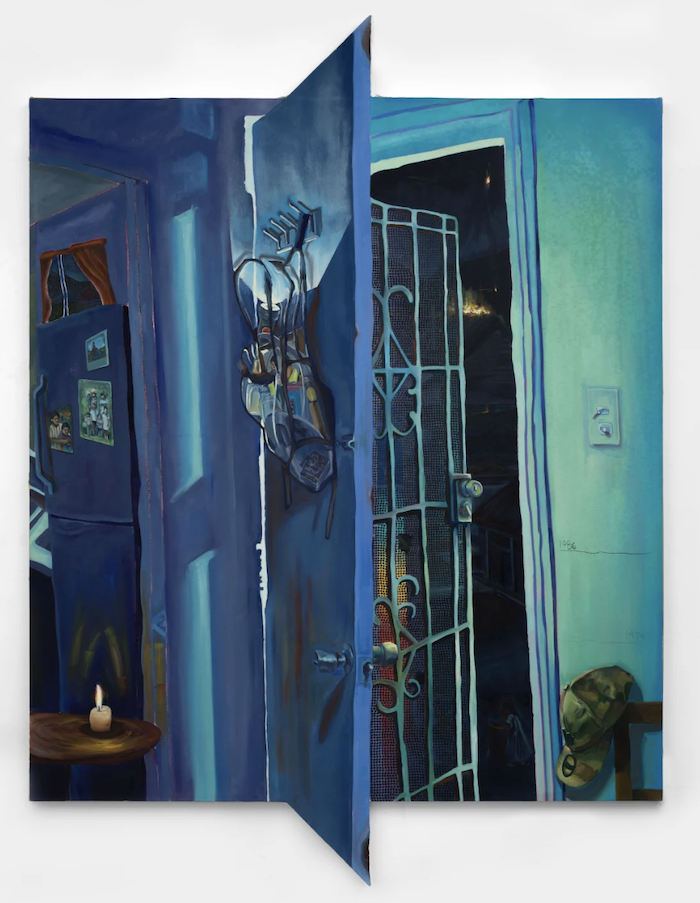 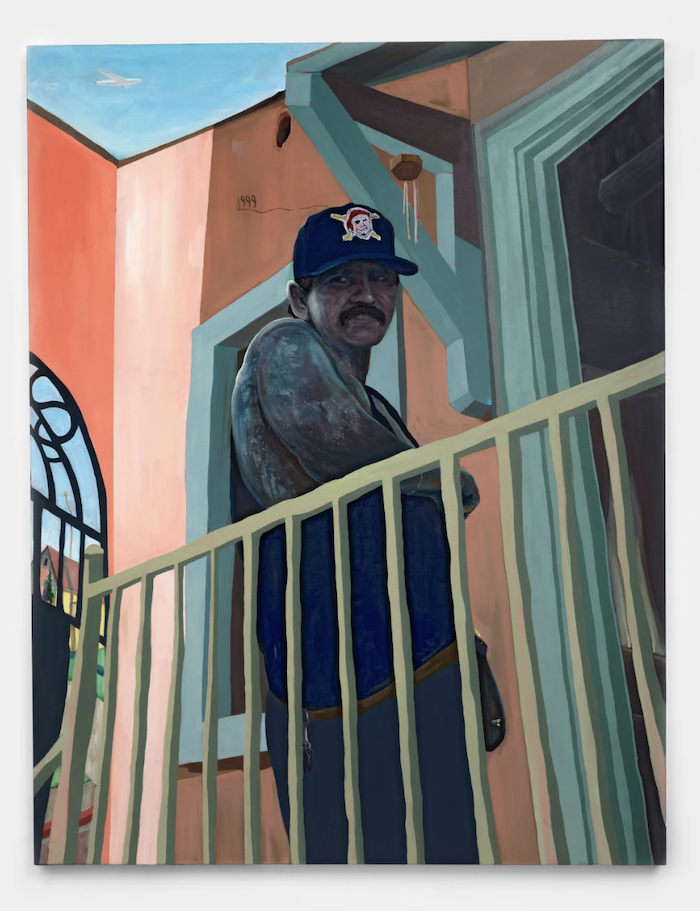 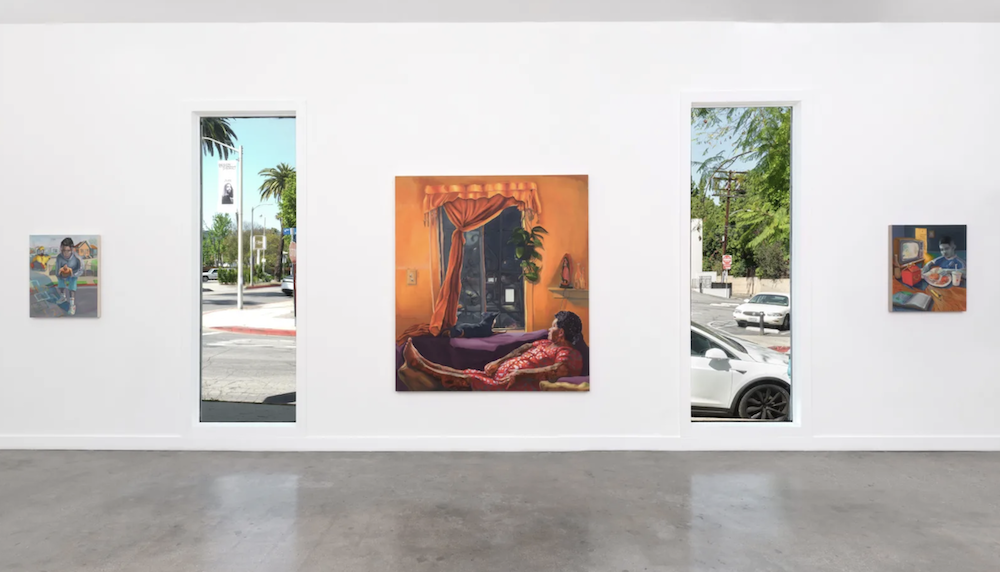 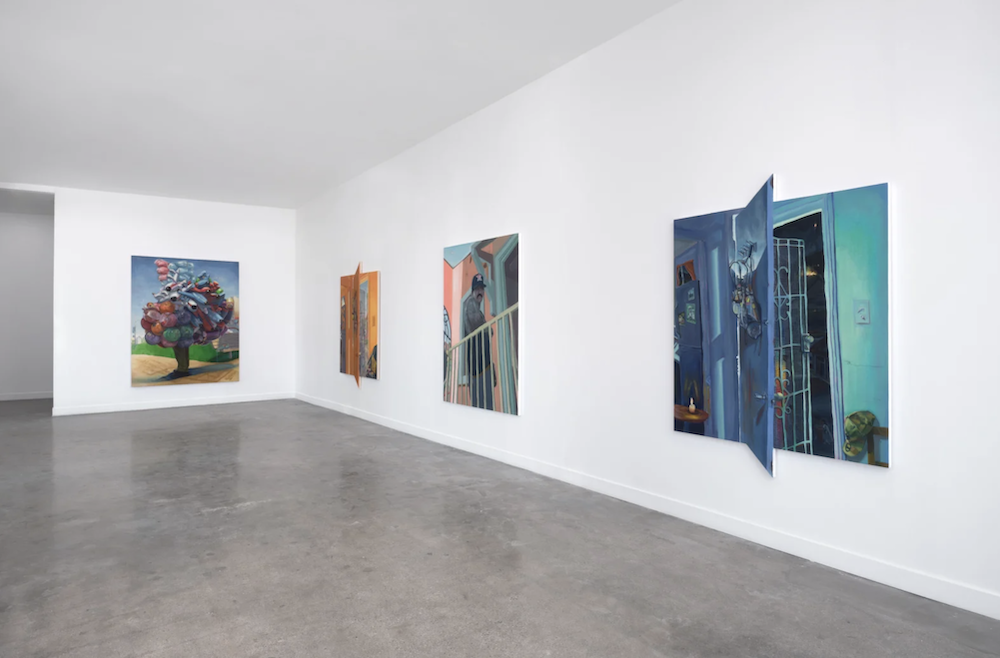 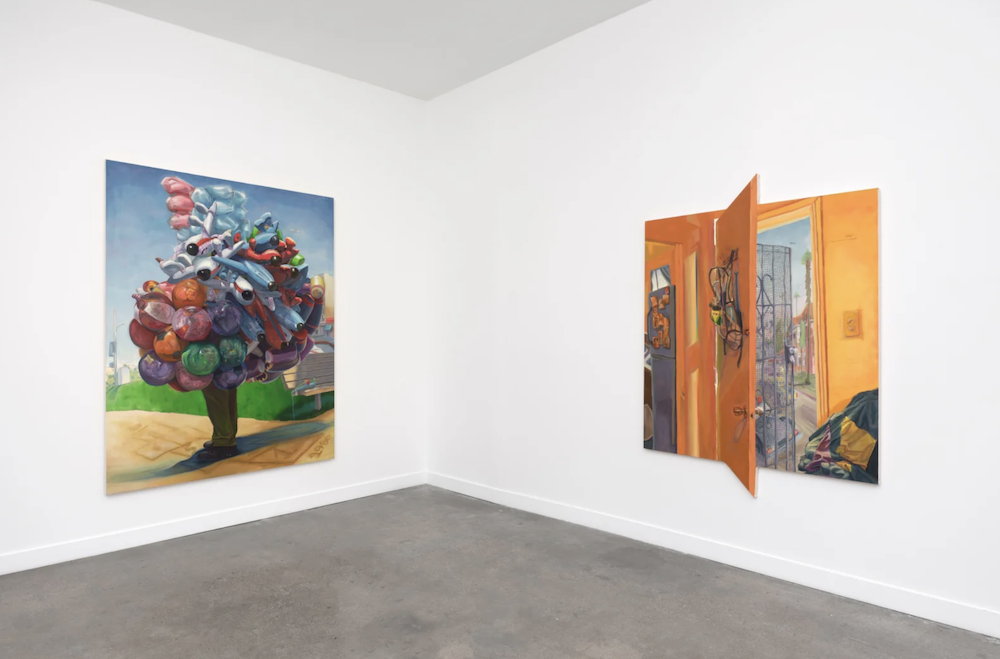 M+B is pleased to present The Quads, an exhibition of new works by Elmer Guevara. This is the artist's first solo show with the gallery. The exhibition will run through May 14, 2022.

Elmer Guevara’s paintings explore the relationships between urban space and familial history, individual memory and collective narrative. Vibrant scenes simmer with a sense of intimate detail, glimmers of affection and pain condensing in the crevices of doorways and blacktop playgrounds. Guevara takes ‘90s family photographs as his source material, collaging snapshots of private history into dense webs of dialogue. Disparate familial signifiers collide within the frame of a single canvas, creating an air of sampled layering, individual motifs and impressions reworking each other into a single, unified hum. Each canvas is a container. Clear backpacks, bottles, and living rooms become repeated empty vessels, populated by ever flowing streams of personal iconography. Guevara often employs tattoo transfer paper during the arrangement of his scenes, further extending the metaphor of containment and repeat transfer to the production of each work itself. Large-scale narrative structures are given shape through the inclusion of idiosyncratic detail, and vice versa – macro history and micro experience riff off each other, their tension producing a fertile ground of identity formation.

Guevara’s paintings gently orbit the 1990’s South Central Los Angeles of his youth. His canvases exude both a studied, energetic fascination with neighborhood social life, as well as a sharp awareness of his hybrid experience as a child of El Salvadorean immigrants. The neighborhood block becomes a site of dual meaning – it is both the built environment that nurtures Guevara’s scenes, as well as the blank canvas upon which his figures are left to experiment with fashioning worlds of their own. Each work harbors a type of insider knowledge, condensing a distinct network of references, from the diasporic to the hyper-local, into a sealed off code. McDonald’s dinners find their counterpart in El Salvadorean soccer jerseys; the 1992 Los Angeles riots and El Salvadorean Civil War are witnessed from matching cracked doorways, each image adorned with a series of protective devices. Guevara’s work exists neither in the past nor the present, strictly speaking, but rather embodies a type of thick temporal flow. Affections, secrets, and icons seem to slip out the backdoor of one history and crop up in another, creating a personal mythology which is more so felt than explicitly stated.

At heart, Guevara’s paintings render the melancholic passage of memory. Mothers and fathers are depicted from the watchful distance of an adolescent’s eye; balloon salesmen and softly lit children pass through parks and playgrounds, imprinting a warm gust of vitality upon their surroundings. Figures slip past the limits of forgotten time, towards the beyond space where storytelling does its most intimate work. Each canvas assembles a fragile assortment of data, weaving Guevara’s early memories of South Central into a sprawling fabric of passed down stories and traditions. Guevara grapples with the weight of the past, with traumas passed down from one generation to the next. At the same time, he recognizes this work as a gamble of sorts – to better understand himself, he must put his faith in the uncertainty of storytelling, photos, and hand-me-down knowledge. With The Quads, Guevara places this faith firmly in the world which raised him, tackling the complexities of family history with both rich narration and casual grace.