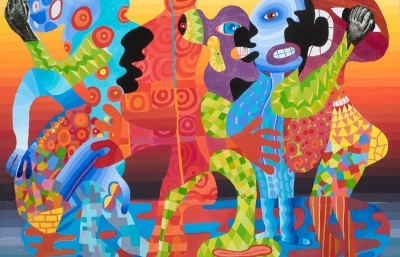 "I'm inspired by the African representation of deities. The Nigerian Ife culture specifically created sculptures that combined the natural features of actual leaders and a spiritual ideal. With my latest self-portraits, I'm exploring the role of an artist as a sort of deity." So Kip Omolade told Ron English in Juxtapoz in the Winter 2018 issue a few years back. There are many ways to describe Kip's work at a first glance, especially on a computer or smart phone screen, one of which the works either look digital or almost like 3D models. No, these are paintings, and as Ron English noted, he was "mesmerized by reflective surfaces and fully understand the complexities of painting oil on canvas to mimic light on metal."

The Diovadiova - Avoid a Void is a pop-up exhibition of new work by Kip Omolade. His latest hyperreal oil paintings of chrome sculptures on 13-15 feet long canvases examine mortality and human relationships.

The show’s title Diovadiova refers to Omolade’s merging of dio, the Italian word for god, and diva, the historical word for goddess. Initially the portrait series examined luxury, beauty and the relationship between celebrities and deities. Omolade has also used Diovadiova self-portraits to investigate his identity as an African American man. He has consistently used single subjects positioned against brightly colored backgrounds to convey his ideas about the universal masks we all wear. However, in The Diovadiova – Avoid a Void Omolade has included multiple subjects in individual paintings for the first time. He states, “The masks have become mythological characters having conversations about humanity. I see them as deities pondering age old questions about birth, life, death, identity and love.”

Omolade’s labor-intensive process involves making a mold of each model’s face, reworking the plaster cast, producing a version in resin and adding a chrome layer with artificial eyelashes. The final sculpture then serves as a model for the hyper realistic oil painting which may take several months to complete. The technique is a historical link between The Diovadiova and ancient African sculpture, such as Ife bronze heads which were also made from a casting method and required highly skilled craftsmanship. Like the Ife sculptures, Omolade’s new paintings use images of faces to portray what it means to be human.

Stay tuned to Kip Omolade's IG for updates throughout the summer.