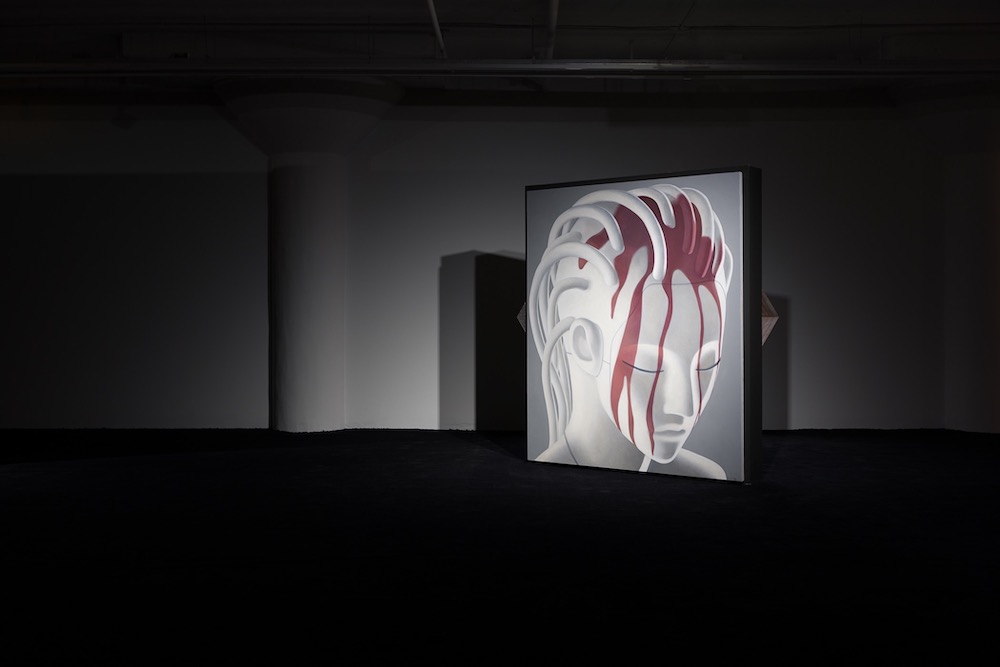 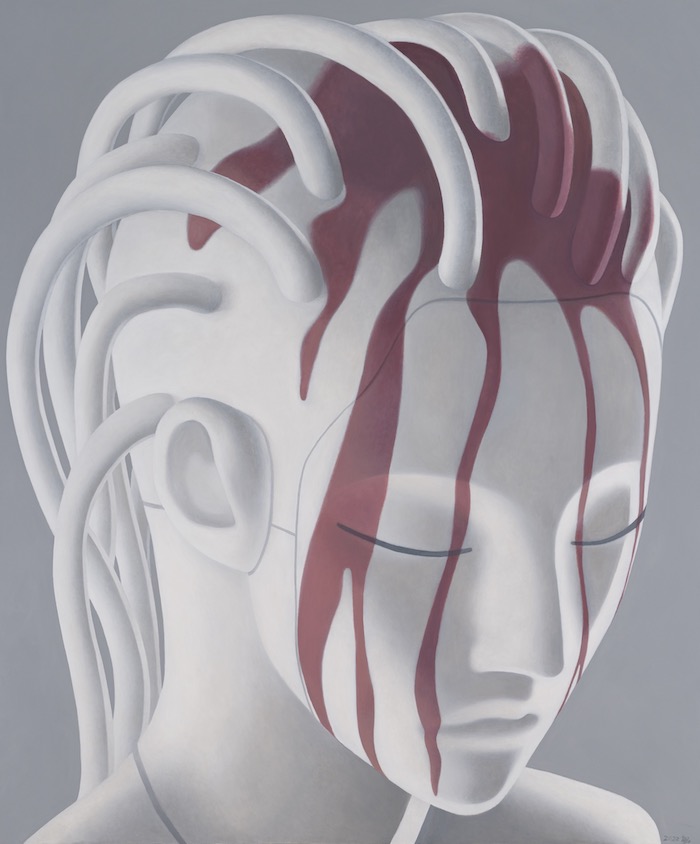 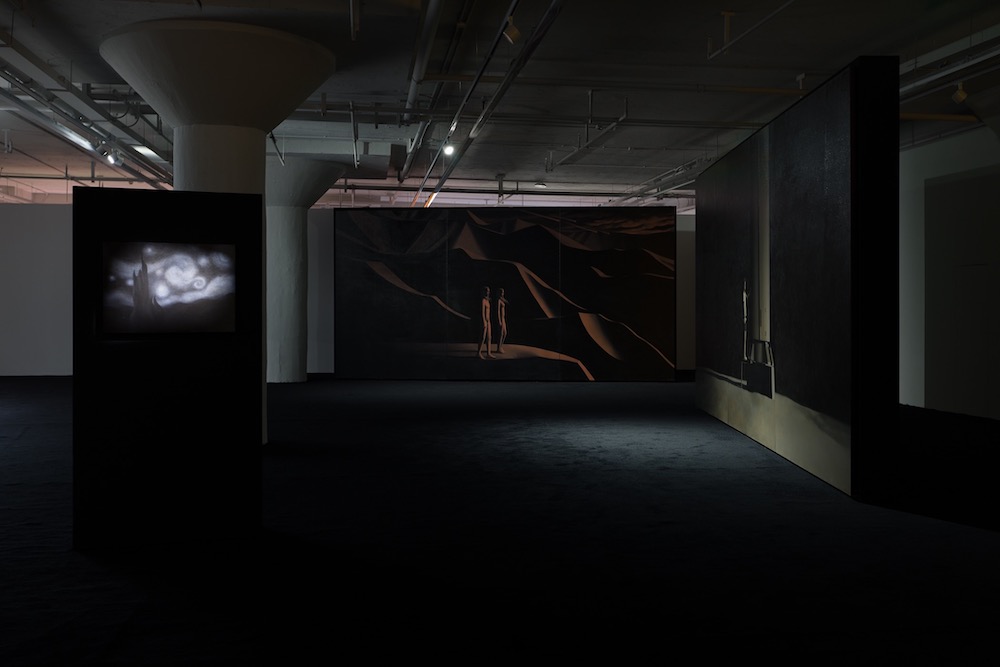 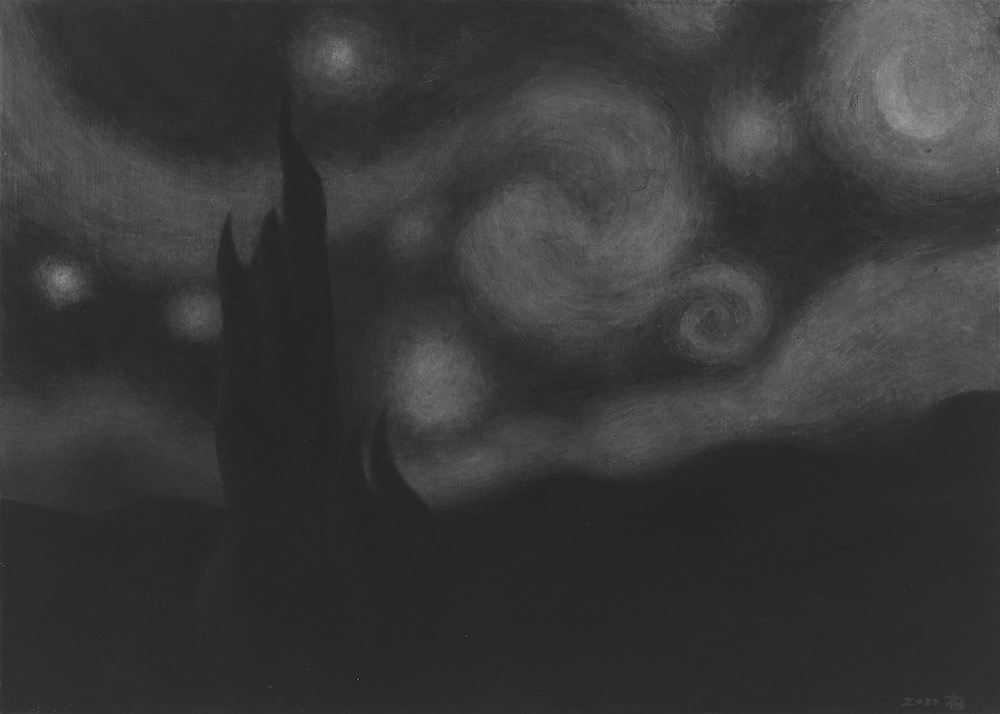 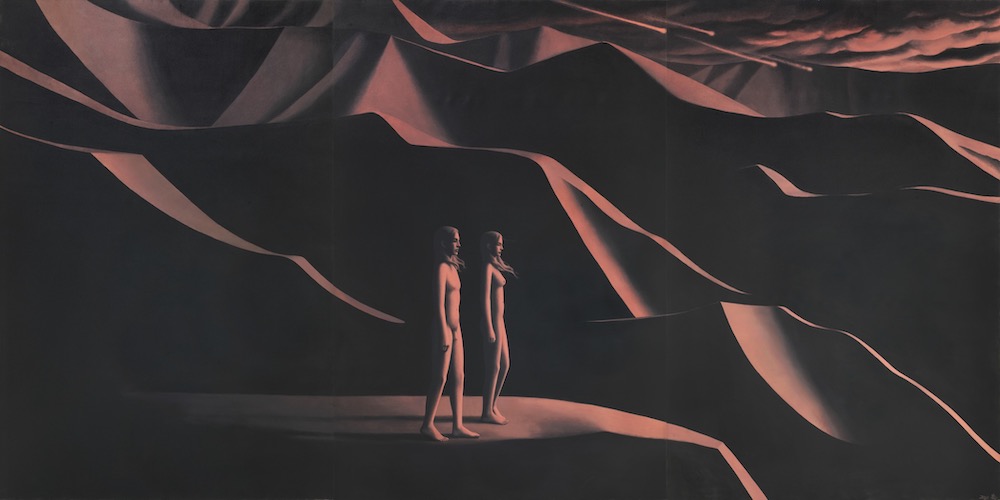 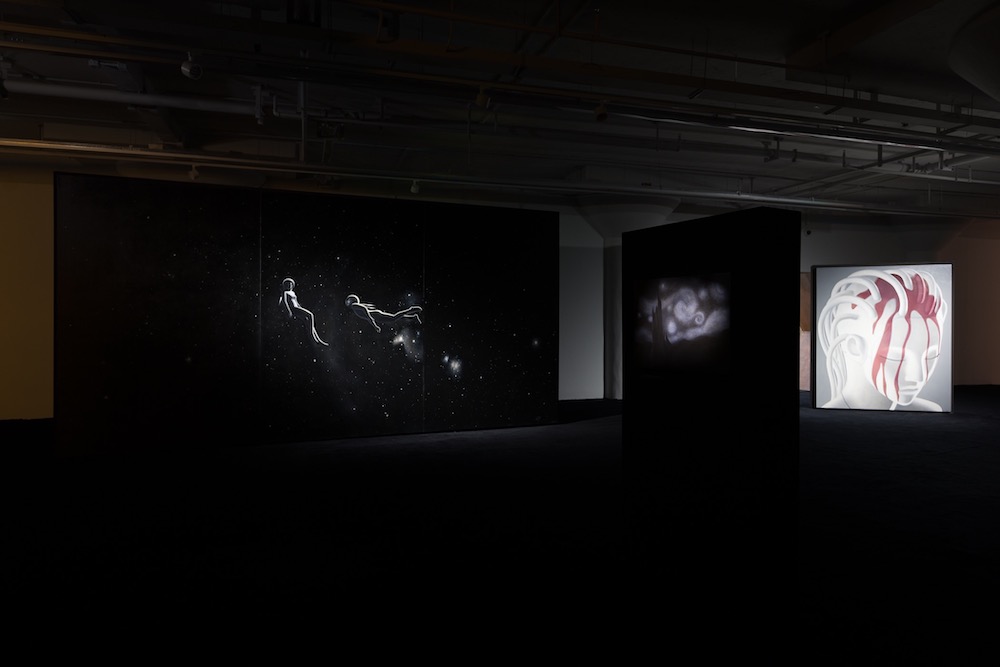 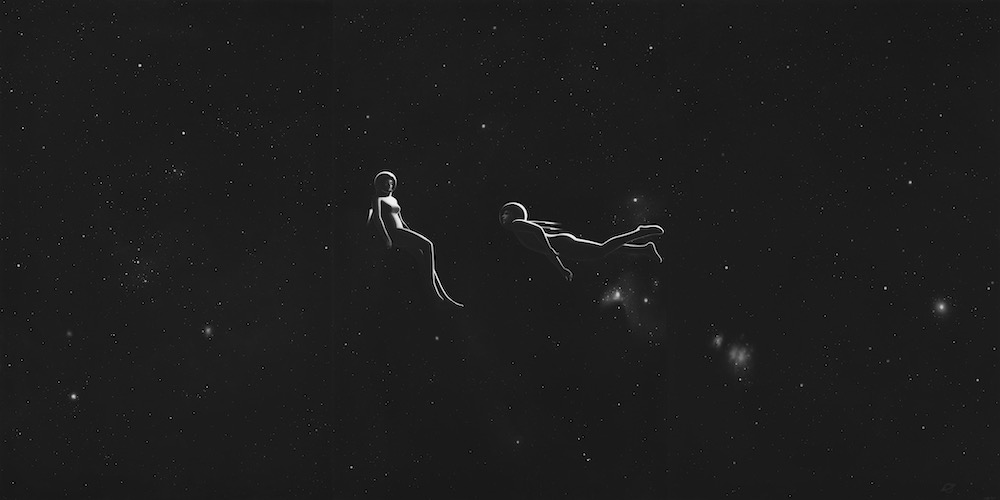 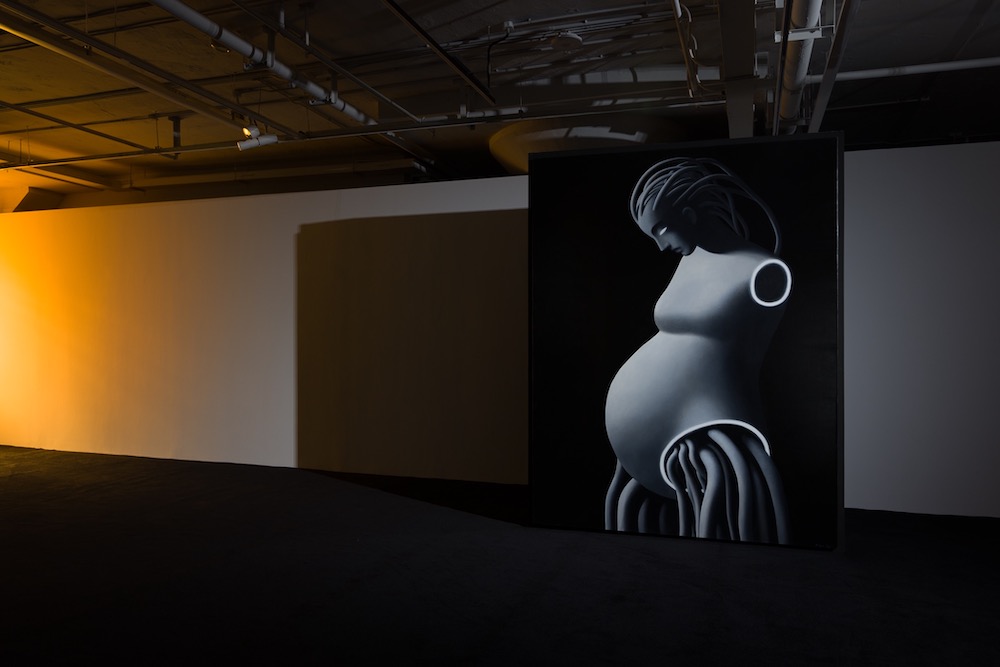 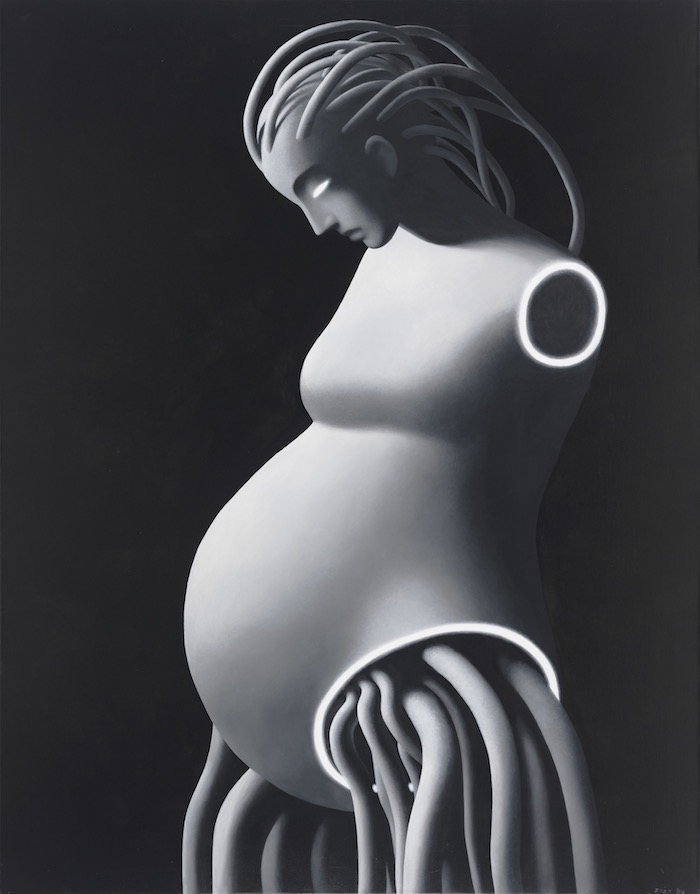 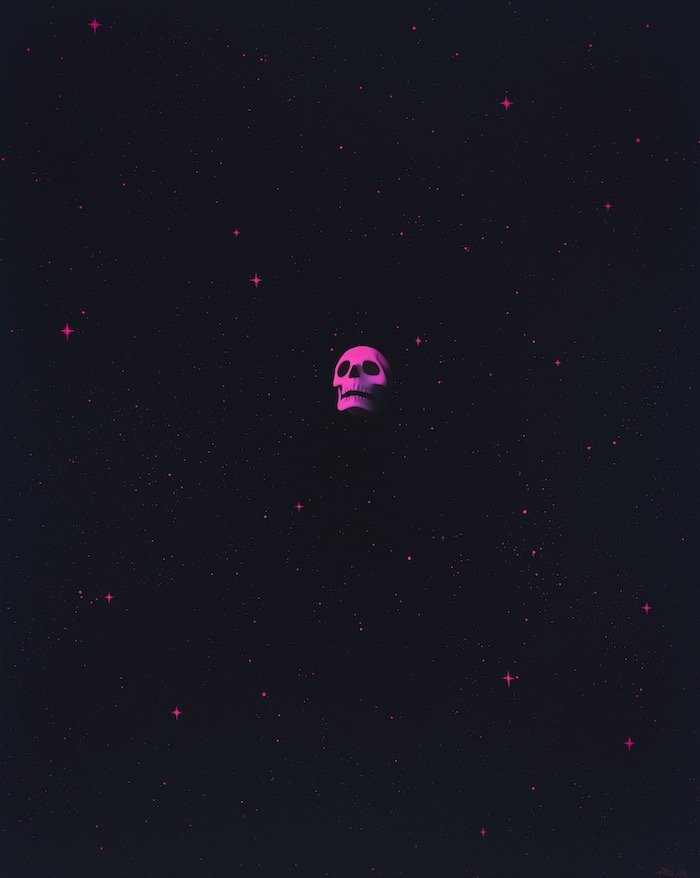 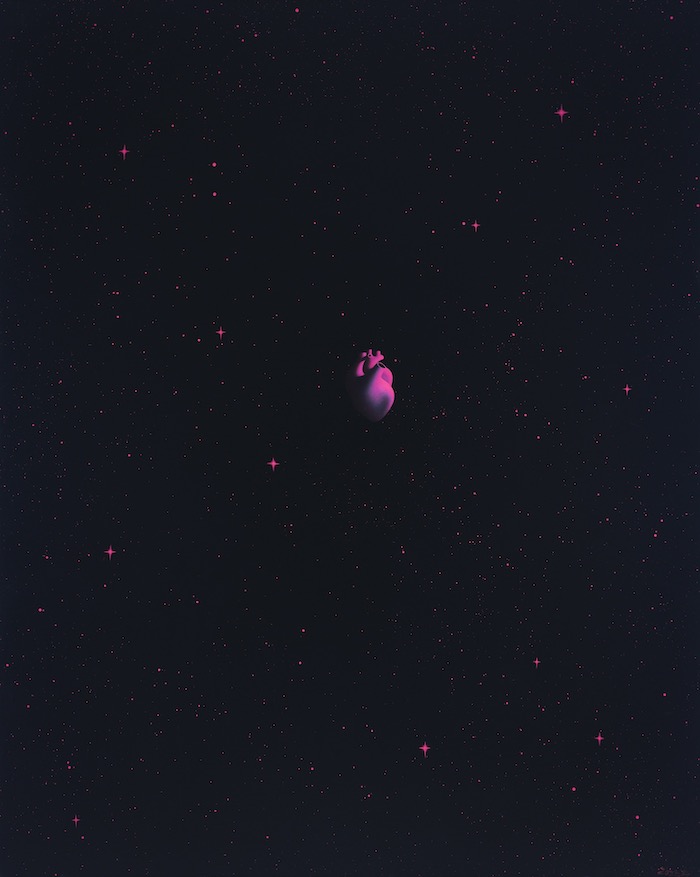 Fantasy is the activity of imagining actions and ideas beyond the constraints of reality. Once those are curbed within the sphere of factuality, one is simply thinking. So, the appealing quality of fantasy is how close or far it can get from reality, or at least possible reality. The fact that it’s generally improbable according to common knowledge, makes it both fascinating and entertaining. But when it starts touching on elements of real, relatable experiences, or firmly accepted beliefs, myths, or religion, the whole thing quickly turns around and gets under a new light. A light, that Tan Yongqing (b.1990, Hebei, China) tends to put to use during his ongoing process of introspection, autodidactism, and an extensive exploration of the contemporary world and the value of human life, continuing on the steps of other artist’s interested in the similar subject. But unlike Bosch's hyper-elaborate narrative in the epochal The Garden of Earthly Delights, the Chinese artist’s approach is closer to Bacon’s exploration of the human form through a portrayal of figures in isolated spaces. Just, in these darkened spaces, supernatural events are depicted in a realistic and matter-of-fact tone, while the real events of human life are regularly imbued with fantastical absurdity.

Working with fantasy as the conception of the exhibition, Fantexi (范特西) creates a sense of fantastical and unexpected through a timeline that spans from Genesis to the extinction of humans. In between this certain starting point and the terrifying ending the opposing themes such as mythology and science fiction are creating conclusive connections with anthropology, quantum physics, and the development of artificial intelligence. And the interplay of unworldly elements borrowed from the fantastical sphere alongside factual information sourced from science and philosophy literature together form a language that speaks about the non-fictional and actual tragedy of humanity’s continuous exploration and struggle. Starting with the biblical theme of walking out of the Garden of Eden in Out of Eden, 2022, touching on space exploration in Luminous Night, 2021, the relationship between AI and humans in Good Friday of the Robot, 2022, and the investigation of humanity’s final destination in Immortal, Immortal Heart, both 2022, the presentation is conceptualized as a compact, interconnected narrative. “Each work is a story of continuous exploration and transcendence in its particular environment or historical context,” Yongquing explains, wondering whether life has a predetermined mission or if it’s the inherent nature of life to transcend and keep exploring. And for such examination, he is working with moments of pure and primal emotions and the truest sense of freedom, hoping that Adam and Eve walked out of the Garden of Eden as courageously as two astronauts on a galactic voyage.

The decision to work with both fictitious and factual concepts enables Yongqing to develop an experimental research methodology through which feelings and thoughts contribute to the learning process. This approach informs the emotional setup of the work which encompasses the restlessness under the façade of tranquility, the attack in response to despair, the fervent romanticism, or the tenderness fed by wisdom. Such a contrasting and complex setting is made more intelligible through a series of formal decisions that simplify and illuminate the key points. From the format and scale, composition, and color palette, to the refined visual language, the impact of this body of work relies on the way the thoughts, concerns, and impressions are transformed into a picture.

The monochrome palette is chosen for a less distracting impact on cognitive perception and for its factual, timeless, and almost documentarian-like aura. The contrasting nature of the grayscale palette proposed itself as ideal for emphasizing the disparate realities and ideals on which the narratives are based on. But unlike some other monumental works, such as Picasso’s Guernica, which also uses the absence of color to maximize impact and conduct an atmosphere, Yongqing’s quest for a clearer, more logical, and intuitive presentation informed a very different, extremely concrete, and precise visual language. The delicate rendition, evoking such classics as Ingres’ iconic Odalisque in Grisaille, allows for a greater accent on light play and volumes which then provide a sense of weight to the subjects. To some extent working in the wain of other Post-digital or Post-Internet contemporaries such as Austin Lee, Cesar Piette, or Emma Stern, Yongquing’s technical approach is irreversibly conditioned by the subject matter and imagery. Regardless of the visibility of strokes, or the seemingly automated overall smoothness and perfection, his paramount goal is to paint the envisioned image and allow for internal emotions and thoughts to exist before the technique. Regularly placed in a vast empty field, the compositions are minimal and simple with smoothened transitions between the elements and geometrically formulated images, quietly continuing in the post-90s Chinese contemporary figurative painting tradition and reflecting on the global visual trends and imaging modes. Such frequent use of negative space, in the end, enhances the rhythm of the painting and outlines the abstract, vast, and barren environments while evoking some of the “ground zero” impacts of Malevich's groundbreaking Black Square, 1915. Finally, stripped of any earthly marks or time and space clues, the imposing larger-than-life works have a humbling effect that equally successfully captures the miracle of human existence as well as its smallness when looking from a cosmic perspective. Playing the card of physical impact on the viewer, the large-scale works have an expanded dimension of time and a sizable spatial dimension while enabling the viewer to immerse in reflection of the imposed existential questions. Again, much like Picasso’s Guernica or some examples from Goya’s Black Paintings series, the ambiance, palette, but also formatting, composition, and scale are utilized to convey the gravity and significance of the subject matter. But where art history greats reflect on contemporary historical upheavals, Yongqing is investigating the value of life, especially in the context of technological development and increasing cybernatisation.

This idea arguably culminates in Good Friday of the Robot, 2022, in which the story of Jesus’ crucifixion is transferred to a robot and the godly role is attributed to humans. By proposing the idea that robots could become the carriers of the human spirit in the future, loaded with our will to continue to survive and explore in the era when humans cannot survive, Yongqing inflicts the question about the concerning relationship between the creator and the creature. Driven by honest confusion and longing for answers, his thinking process quickly pushes out of the realm of reality towards a disputable fantasy. Unifying the myth, religion, science-fiction, and sentiment, the portrait of the bleeding bionic Medusa-like character transforms into a fantastical but potentially prophetic warning. —Saša Bogojev