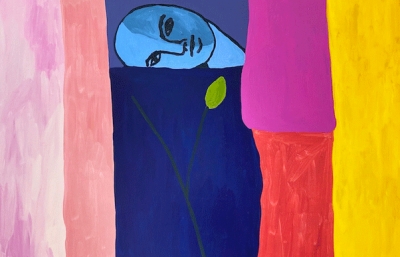 A few years back at Art Basel I made my first acquaintance with Pieter Schoolwerth's work, a big, dazzling display of technology inspired art that challenged and left me wide-eyed. With impasto brush stroke cutouts revealing layered figures, they beckoned with depth and perspective in a traditionally informed style that was equally contemporary. Basically, it felt like a computer fell in love with the medium of painting and decided to start making its own work.

Fast forward to 2020, and the Brooklyn-based artist is about to open his solo debut with Petzel Gallery, again, showing in his hometown after 3 years. In Shifted Sims the artist crafts his technique to encapsulate and depict our current, socially distanced lives in lockdown.  In an allegorical parallel between our reality and life simulated video games, he exaggerates incompatible aesthetics to emphasize the grave issues within the situation. Low-res pixelated sections clash against Bacon-like faces, as Schoolwerth’s  series of visual glitches serve as metaphors for the social conundrum we grapple with. The big series of large-scale canvases mark another milestone presentation for the artist, so we're excited to learn more about the work and his clever, insightful process. 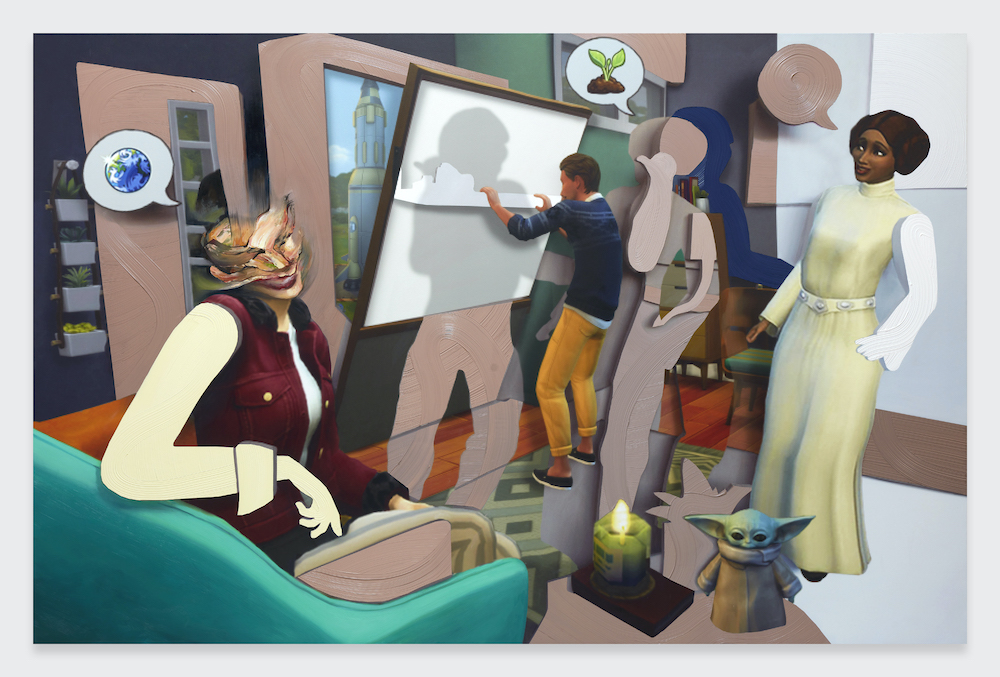 Sasha Bogojev: How did you come up with the idea for the show and why choose to work with actual Sims characters?
Pieter Schoolwerth': I made most of the show during the lockdown in New York, and in putting on a mask every day, while doing many of the things through Zoom that, at one point in life, I once did in person, I began to feel almost like I was now navigating a simulation of a former life I used to live. It was as if I’d migrated into a strange new space in between my body and the world. Spending so much time alone in quarantine communicating with dozens of faceless profile icons each day, their ‘shifty’ status becomes more ominous.  Anyone (or no one in the related case of robocalls and AI chatbots) can easily occupy the ‘digital body’ of another person simply by hiding behind a profile bunker to drive their avatar through the web.

And Sims enter the picture...
Looking out my studio window to see people walking around with masks on is so eerily similar to seeing both the clusters of anonymous profile icons online and avatars communing in The Sims 4, it’s uncanny. The Sims 4 seemed to be an accessible, almost generic, example of a life simulation game to dive into in order to try and figure all this out. The game began in 2000, a few years before social media went mainstream, and, I think, provided a blueprint for the possibility of living from a (social) distance, building any random avatar you choose to perform whatever life in whatever world you imagine.

How did you relate this "new normal" and the digitalization of reality to the traditional format of painting?
This show begins from thinking how painting can represent this weird new ‘once-removed’ reality we’re living, and particularly how can I represent an avatar body in a simulated world – that being a figure that is covertly controlled by another person – which is not unlike how I often feel I’m remotely steering my own avatar each day now. 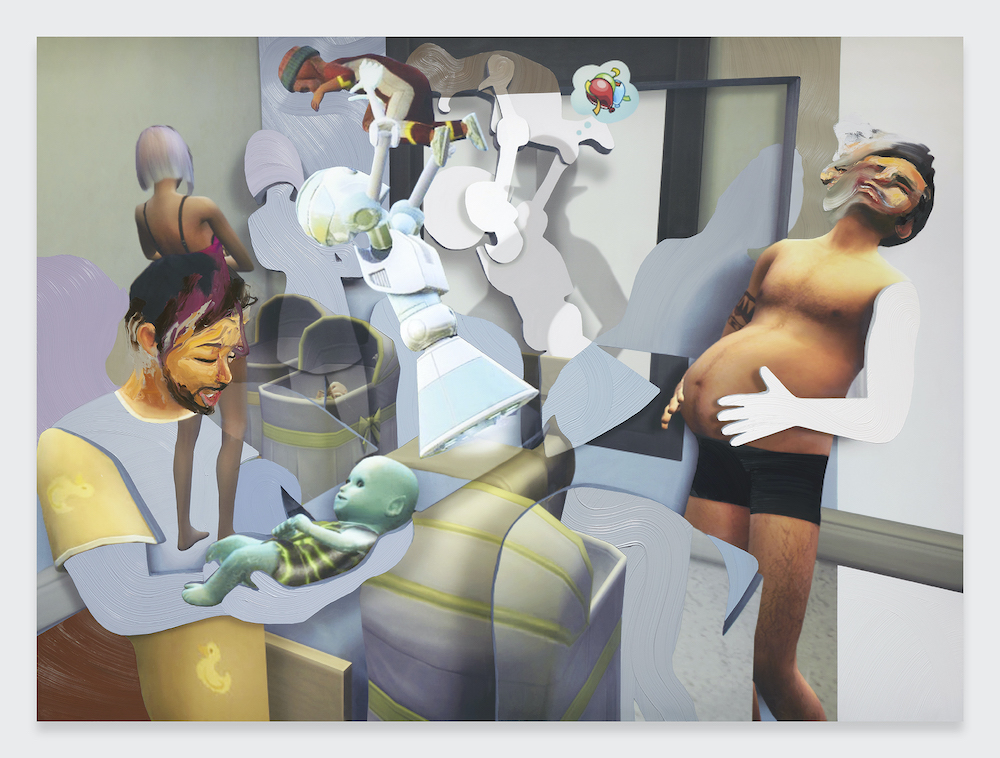 Figurative painting seems to be going through a sort of renaissance. What are your thoughts on why or what might be the consequence?
Anyone making painting now has limitless styles and techniques to draw from, as there are hundreds of years of paintings to look at and be inspired by. Choosing a style now isn’t so unlike choosing filters, apps and masks to augment your body and images before posting them.

What attracts you or challenges you to mix techniques and aesthetics? Does mixing them sometimes just not work?
I’ve always been a big fan of experimentation and constantly trying new techniques to keep things interesting – as opposed to the tired idea of finding one ‘brand’-like style to stick with - I get bored pretty quickly after I’ve worked on the same project or in the same style for a year or two and it starts to feel like a job. I’m constantly trying new materials and technologies to invent pictures I’ve never seen before.

So what are the new experiments and techniques you've incorporated in this show?
In the Shifted Sims project, I’ve returned to rendering certain figures in each painting in an expressionistic gestural manner - I improvise them and make the heads up spontaneously on the spot, whatever happens in that moment. This style is very much at odds with the more measured, taped off and tightly controlled gestural passages of painting around the figures, which is the infrastructural space of the composition, in a way, or the linear ‘networks’ connecting the human bodies. 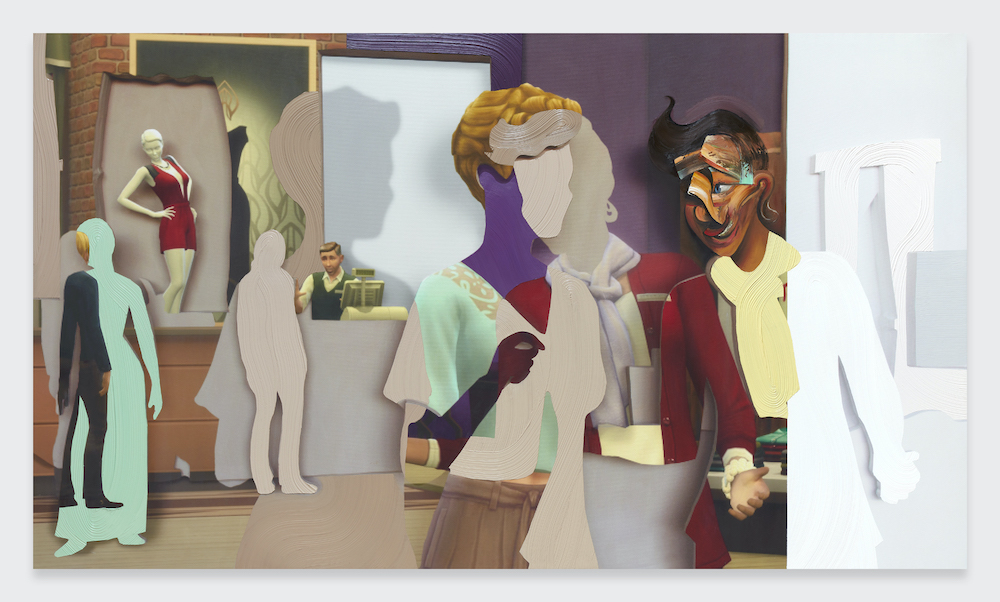 What is your rationale for using those two opposing aesthetics together?
I think of these two contrasting styles as analogous to human figures trapped and trying to communicate with each other inside of the oppressive, heavily surveilled space of our digital daze, or in the case of The Sims 4 narratives, avatars meeting each other inside of the game to strategically perform their lives, as we’re basically all doing on Zoom now.

How do you deal with situations when things don’t work out together?
Situations in which things “don’t work,” as you call it, always lead to breakthroughs that do; failure is a goldmine, as I see it. I was hesitant to return to traditional modes of rendering I used in the early 00s, but after I began combining this style with my coldly alienating gestural aesthetic of the past few years, I realized this combo provided a pretty accurate model for depicting the state of humans in technological abstraction now.

How much of the work is influenced by modern technology or techniques and how much is influenced by traditional painting?
I combine my experience of decades of traditional painting with different digital approaches to composition and the production of space. Around 2015 I remember having a realization that the substance of so many experiences has been abstracted from the activity.   We buy things without money through credit, we have friends and sex without bodies, and violence without blood through video games. I invented the multi-media process I’m using now (which incorporates photography, sculpture, and printing), to try and bring painting into this same scenario – we touch so few things directly anymore, as one does in making a traditional painting—so what might an ‘indirect’ form of painting be like? 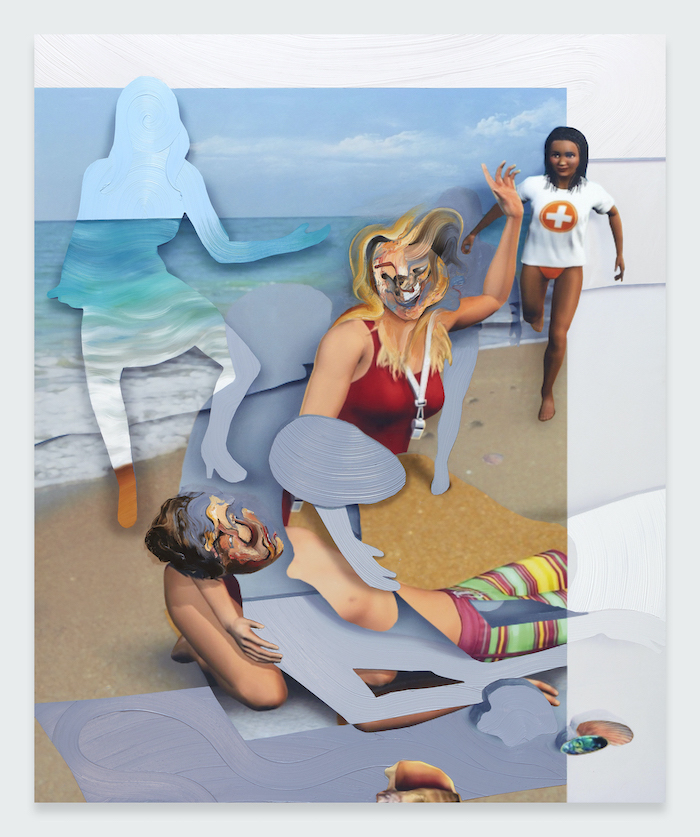 What are some of the, let's say, hi-tech methods  you've developed since then?
I began building 3D models of my drawings, photographing them, and using the computer to embed digital imagery into the space of the models, print them out on canvas and paint on top of the prints. I see the model kind of like an operating system – a blank template like a phone or computer that information passes through and is composed within. My paintings depict a simulation of space: a photo of a sculpture with paint on it, and the sculpture has been once-removed, and literally thrown away—it’s quite like our distance from the world of today, in which something we once had has been lost.

Was any of the work directly influenced by the pandemic, and how did you choose your particular perspective?
One of the more challenging works in the show to think through was a painting depicting a scene of figures infected and struggling with Covid-19. Painting during the lockdown in New York, I wanted to make a work documenting my experience of the pandemic, and I began to think about old history paintings of the past – images attempting to memorialize an intense shared experience we’ve all been through together. I thought it made sense that a contemporary form of history painting might be composed through the ‘soft’-filtered remove of memes, emojis, and simulation game aesthetics. This almost passive aggressively coy ‘softness’ that tech and game designers use to model human expression is evidence of their distance from the actual world, in this case one struggling through enduring a tragedy. The tension in the feeling of when you see snarky lol memes about the virus online while you feel all the actual death a few blocks away in New York has been so real the past few months, and I’ve tried to convey through this painting … the disembodied avatar is simply not equipped to handle and express genuine human suffering.  Indeed, perhaps this is one of the inadequacies of living life behind the mask of simulation.