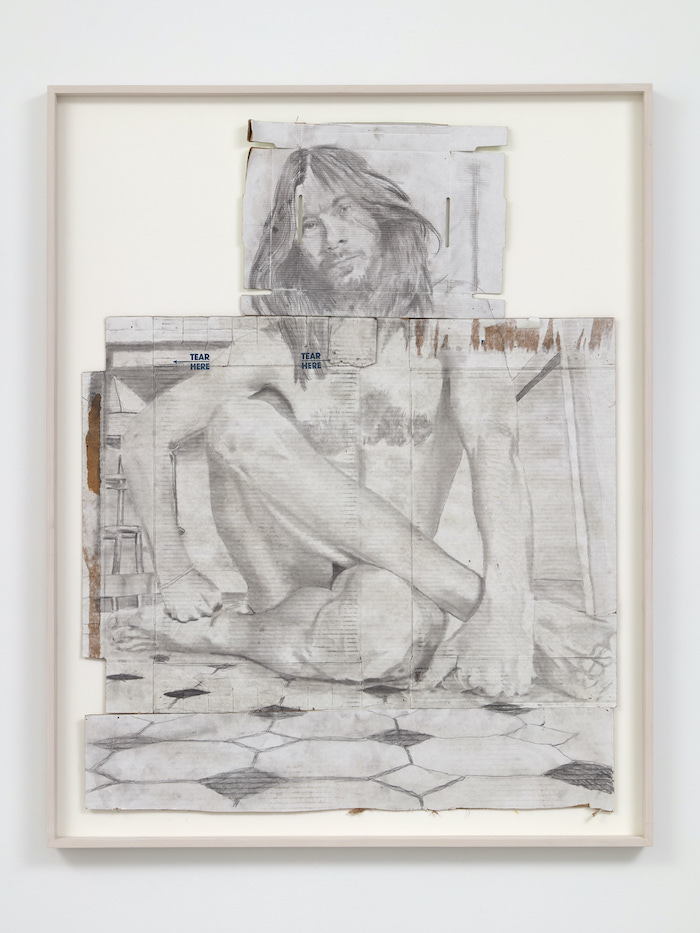 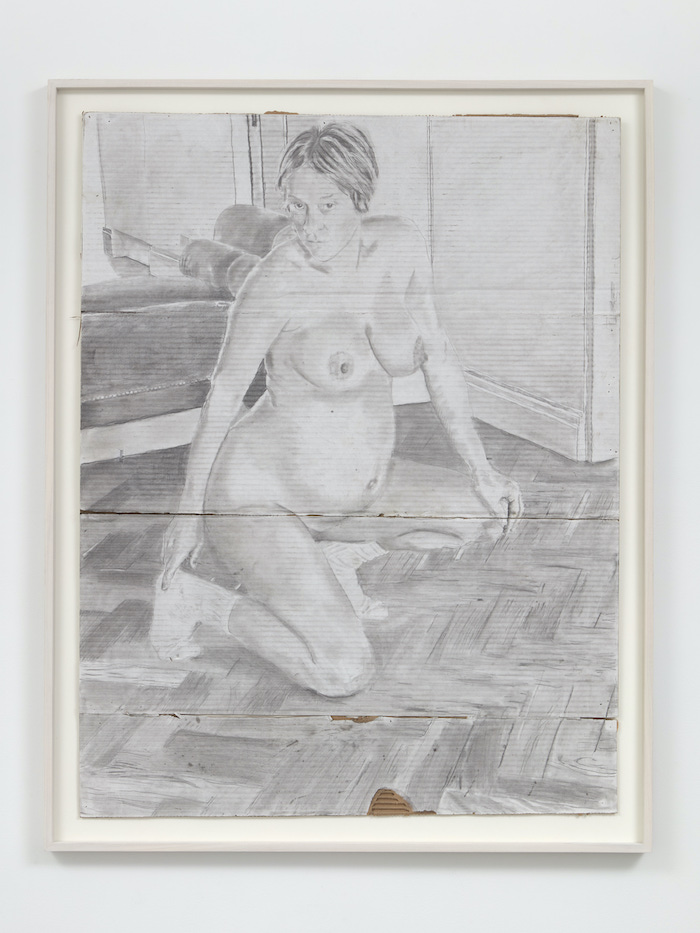 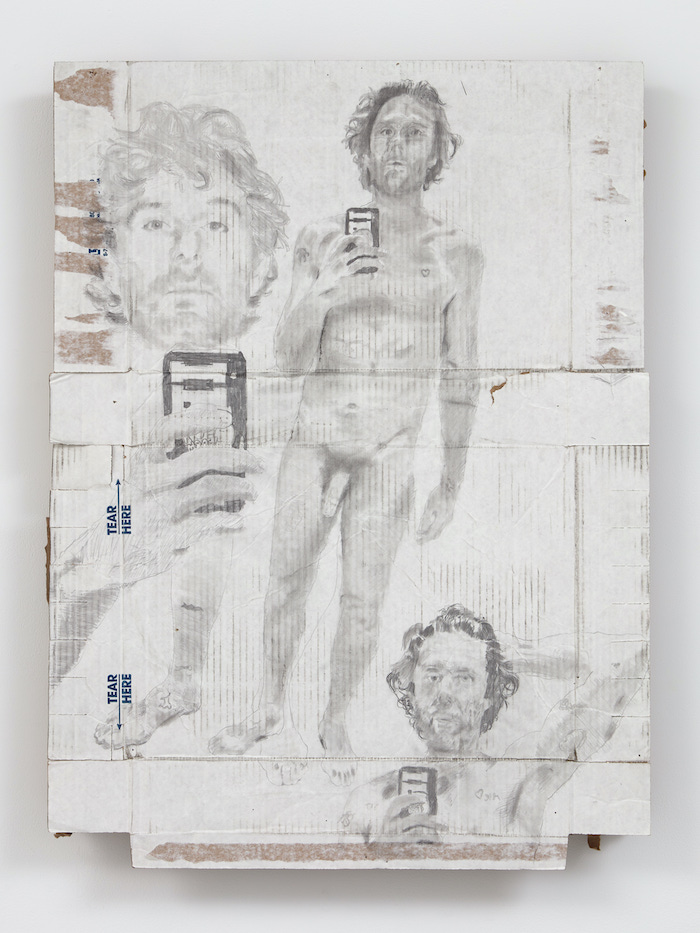 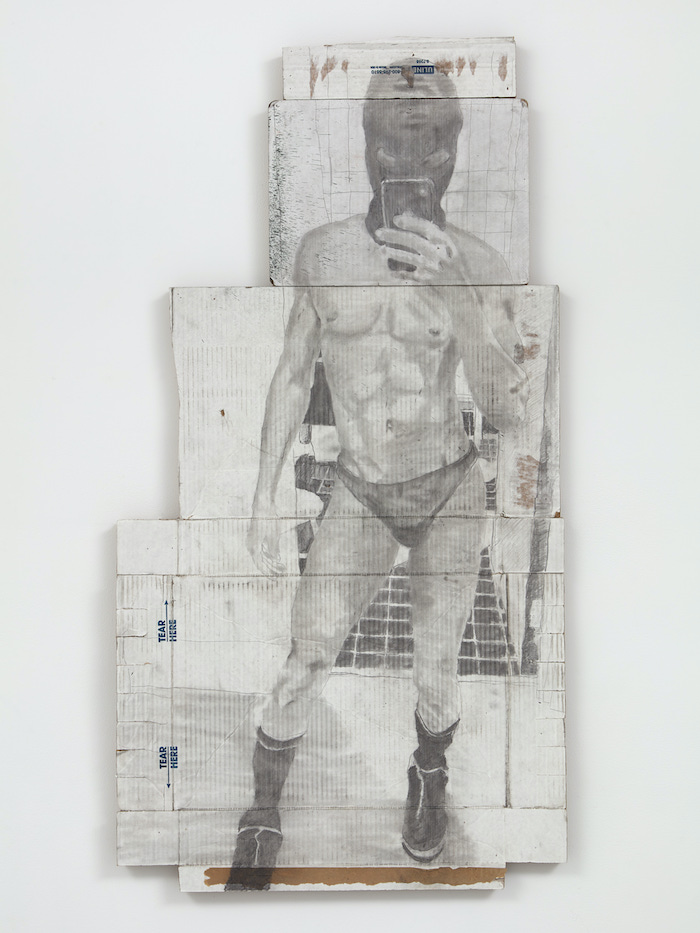 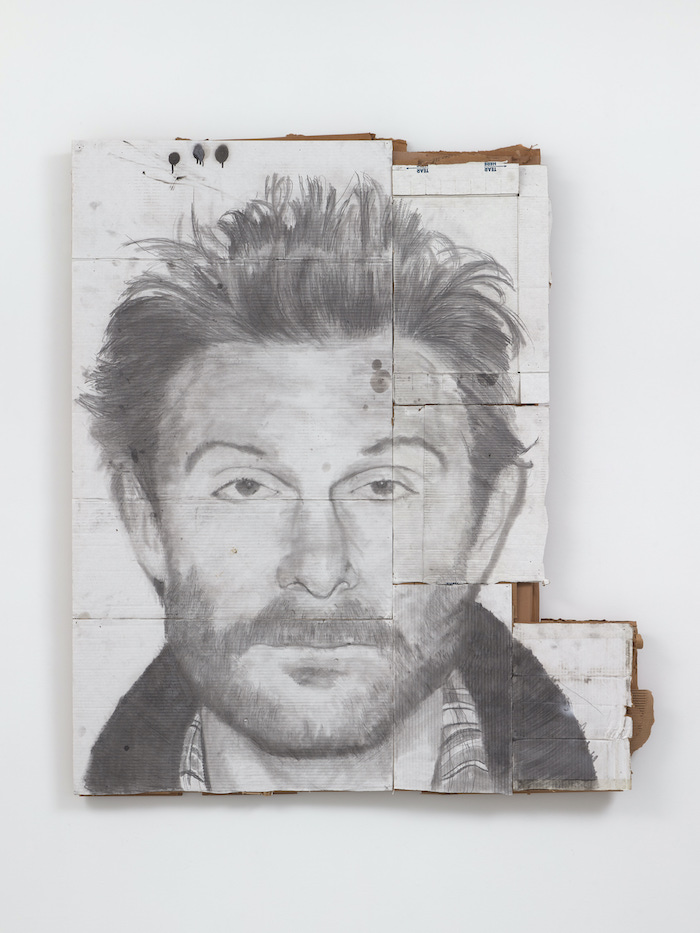 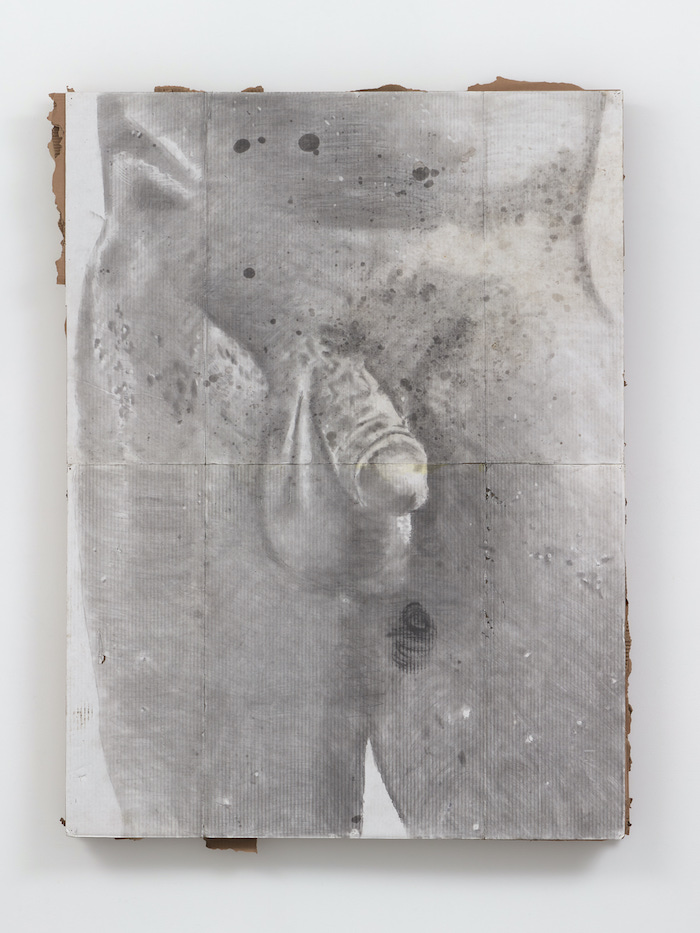 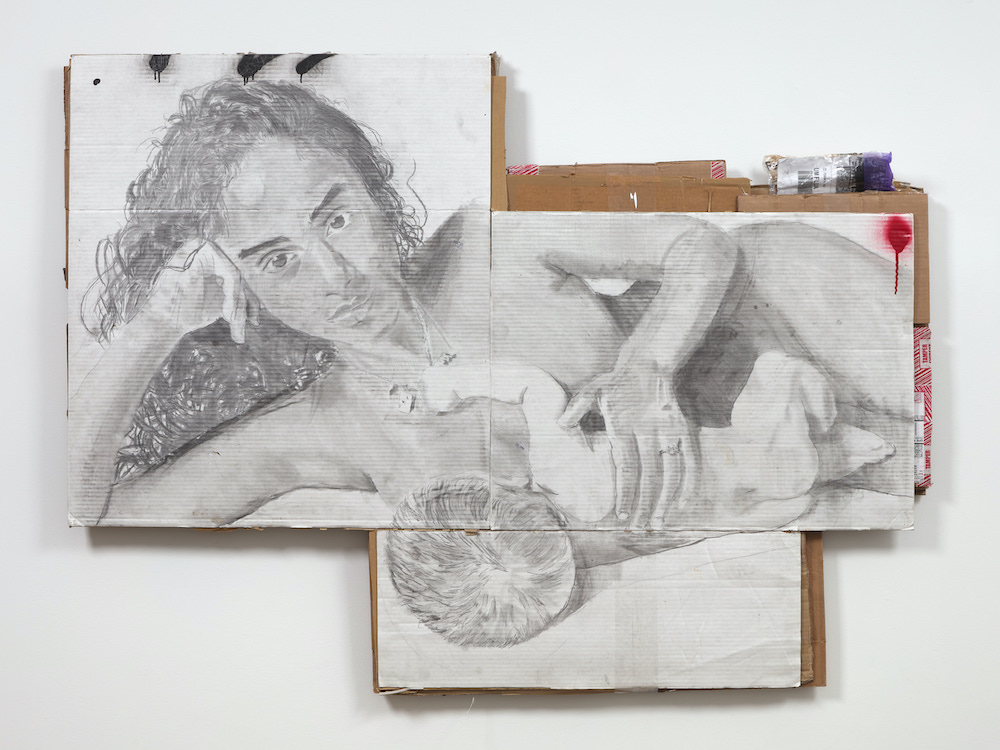 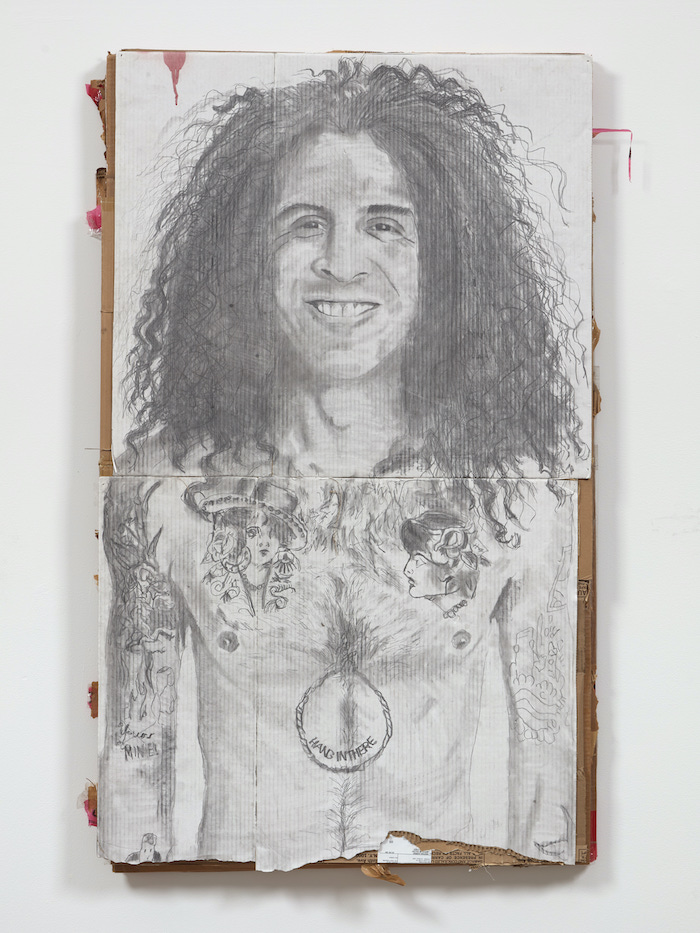 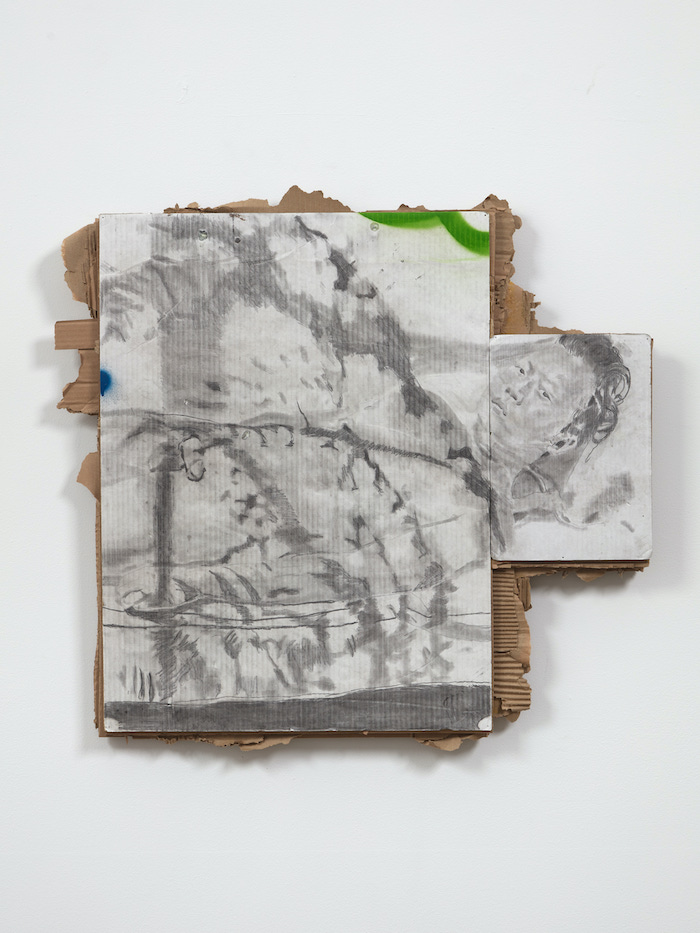 Bortolami Gallery is pleased to announce S3ND NUD3S, an exhibition of New York–based artist Kunle Martins. The history of portraiture is long and rich, and today, in the age of social media, the portrait has yet again transformed and become more ubiquitous than ever. Martins explores this perennial typology with the humblest of means: graphite and charcoal on white cardboard. As the title suggests, the artist requested naked selfies from his friends, and these suggestive self-portraits are the starting point for the works in this exhibition.

In previous displays, Martins has used driver’s license and passport photos as his point of departure. The images from which he works now are more personal, individual, and fiercely intimate. While a nude selfie could be seen as the epitome of narcissism, or at least exhibitionism, these portraits lack the boasting and bragging evident in so many selfies we see online. Nor are they Instagram-perfect. Rather, they are understated, delicate, minimal, and profoundly intimate. In addition to six nude drawings, the show also includes a portrait of the artist Dan Colen based on an ID card photo, and a drawn self-portrait of Martins focusing on an intimate part of his body—a detail taken from an existing photograph by artist Jack Pierson.

Martins places a great emphasis on his materials. Cardboard of the sort he employs can be found all around New York; most people consider it worthless, and the artist thus finds it everywhere, ready to be collected and carried away. The cardboard thus takes on a somewhat romantic aura and at the same time constitutes an anonymous portrait of the city in which he, and the people he portrays, live. Martins sometimes combines various cardboard pieces of different sizes to create a larger substrate, almost like a simple collage, which when framed creates a poetic sense of deep layering.

One might view the exhibition as a group portrait of Martins’s very own New York, from its beauty and glory and its ugliness and iniquity. Viewed together, the works convey something of the streets he grew up on, the buildings that surround him (all of which he has explored as a graffiti artist over the last twenty years), and, most importantly, the friends that have become his family since he left home at age sixteen.

Kunle Martins (b. 1980, Manhattan, New York) lives and works in New York. Known for the past two decades as Earsnot, Martins was the founder of the infamous IRAK crew of New York graffiti artists. His work has been the subject of numerous exhibitions, including solo presentations at 56 HENRY, New York (2020) and Shoot the Lobster, New York (2019), and group exhibitions at Albert Merola Gallery, Provincetown, Massachusetts (2020), Jeffrey Stark, New York (2019), Bonny Poon, Paris (2015), The Hole, New York (2012), and MOCA, Los Angeles (2011), among others.