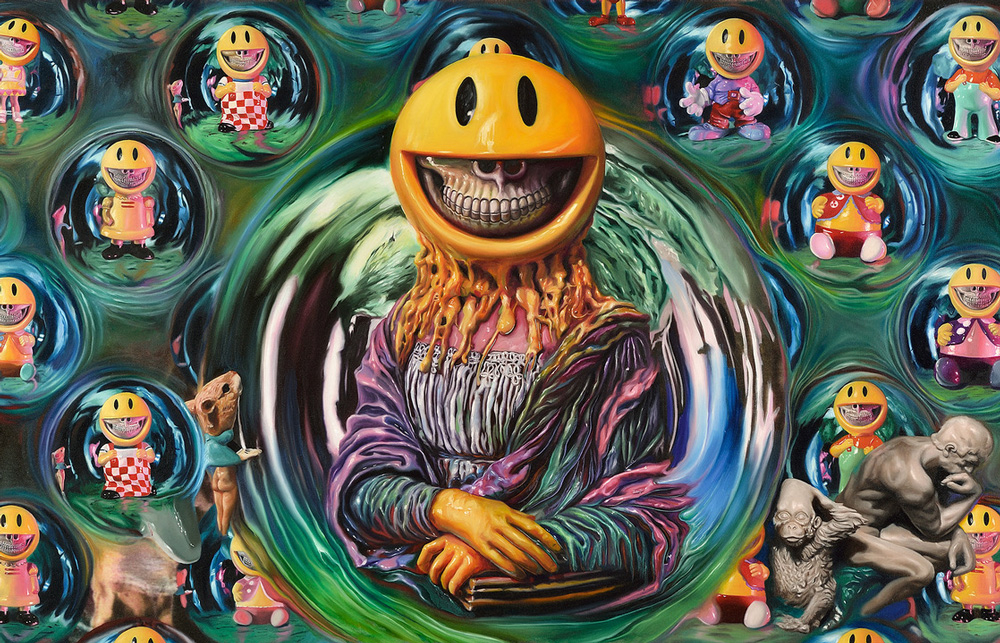 Ron English is an icon in the world of art we feature in Juxtapoz. He has, since day one, been an unapologetically political artist who uses his talent and imagery to speak truth to power, chronicling the many faces of power that have cycled through since he started making art. As an early pioneer in street art, English has moved into making equally provocative paintings that grace the walls of galleries, including an upcoming show at Matthew Namour Gallery in Montréal titled Universal Grin. We caught up with Ron before this new show and picked his brain on making art in the age of Trump.

Ron English is an icon in the world of art we feature in Juxtapoz. He has, since day one, been an unapologetically political artist who uses his talent and imagery to speak truth to power, chronicling the many faces of power that have cycled through since he started making art. As an early pioneer in street art, English has moved into making equally provocative paintings that grace the walls of galleries, including an upcoming show at Matthew Namour Gallery in Montréal titled Universal Grin. We caught up with Ron before this new show and picked his brain on making art in the age of Trump. 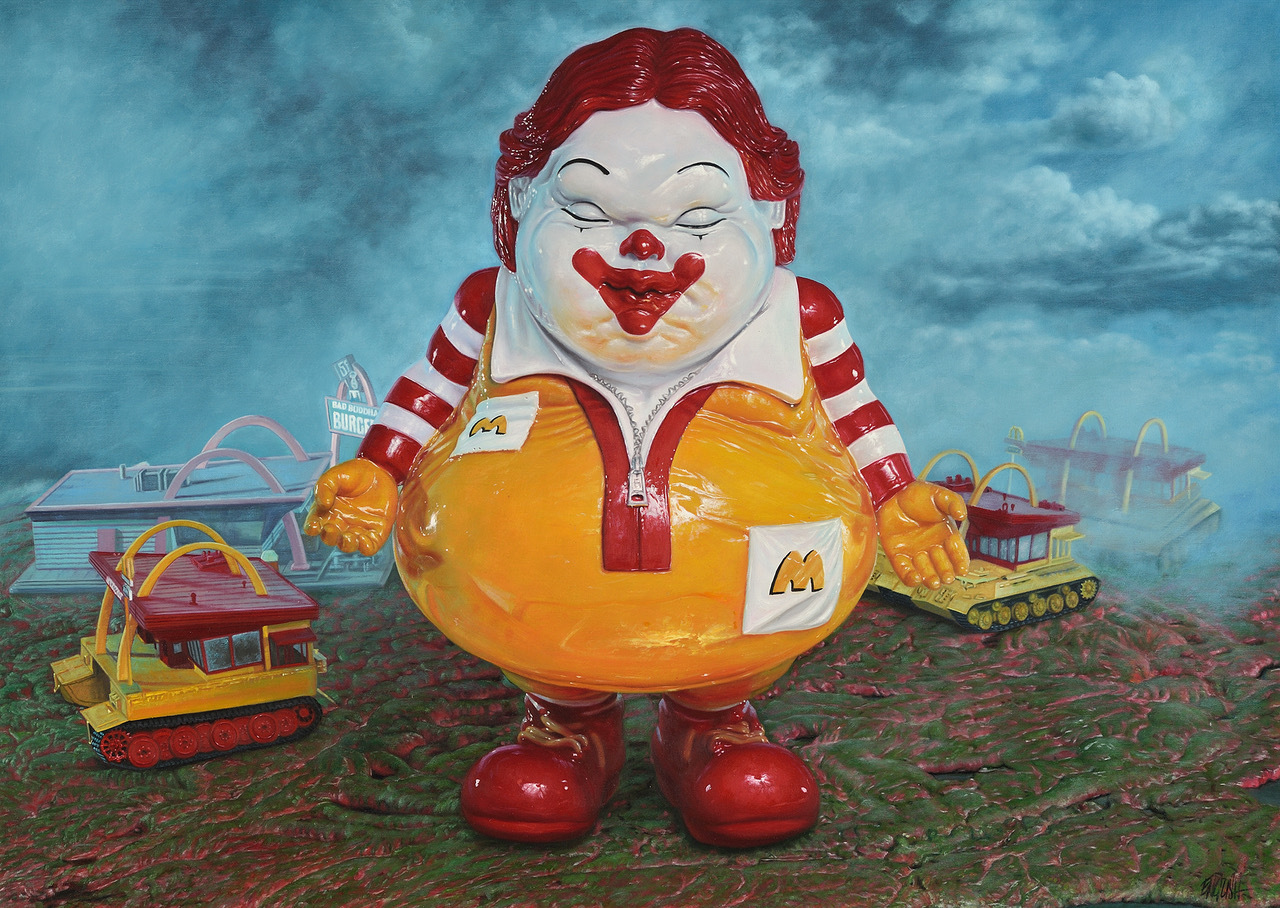 Juxtapoz: So, how overwhelmed are you with the continuing saga of American politics?
Ron English: I think the country has been frustrated with capitalist democracy, corpocracy, or whatever it is our system has become, and people wanted something different. The two most appealing options seemed to be a Sanders Socialism model, share the national treasure, all for one, one for all thing. Or instead of this two-party obstructionist game, how about an autonomous republican autocrat who can cut through all the infighting and get things done? Oh, and good old “hold the fort Hillary”? Knowledge of policy and global governments, astonishing. Public image? Somewhere between Lucy Pelt forever outsmarting the beloved Charlie Brown, (in this case Bernie Sanders), or a Lisa Simpson, smarter than Bart but not nearly as entertaining. In the end, the wildcard showman won, because, guess what? It’s all show business now. The media reconstructed itself around his every tweet. Complete control over every news cycle. Genius. There was the reality show that painted a picture of Mr. T as the guy in charge. There were the pro wrestling appearances, (every pro wrestling fan knows the suntanned man with the big blonde pompadour is the good guy). And no allegiance to the truth. A great showman always has his way with the truth. The man won on the day he came down the escalator. He got ahead of the game. He recognized the only truth worth knowing: No one ever changes their mind. When confronted with facts, they entrench. Of course, they were not completely sold that day, it was more “I kind of like that guy. Shoots from the hip. Not afraid to say what’s on his mind” Sold. From that point on the more facts thrown at them, the more they entrench. He goes from being their guy to being their messiah. Women feel protective of him as they would their most “special child”. Men, well, we can just never admit we are wrong. 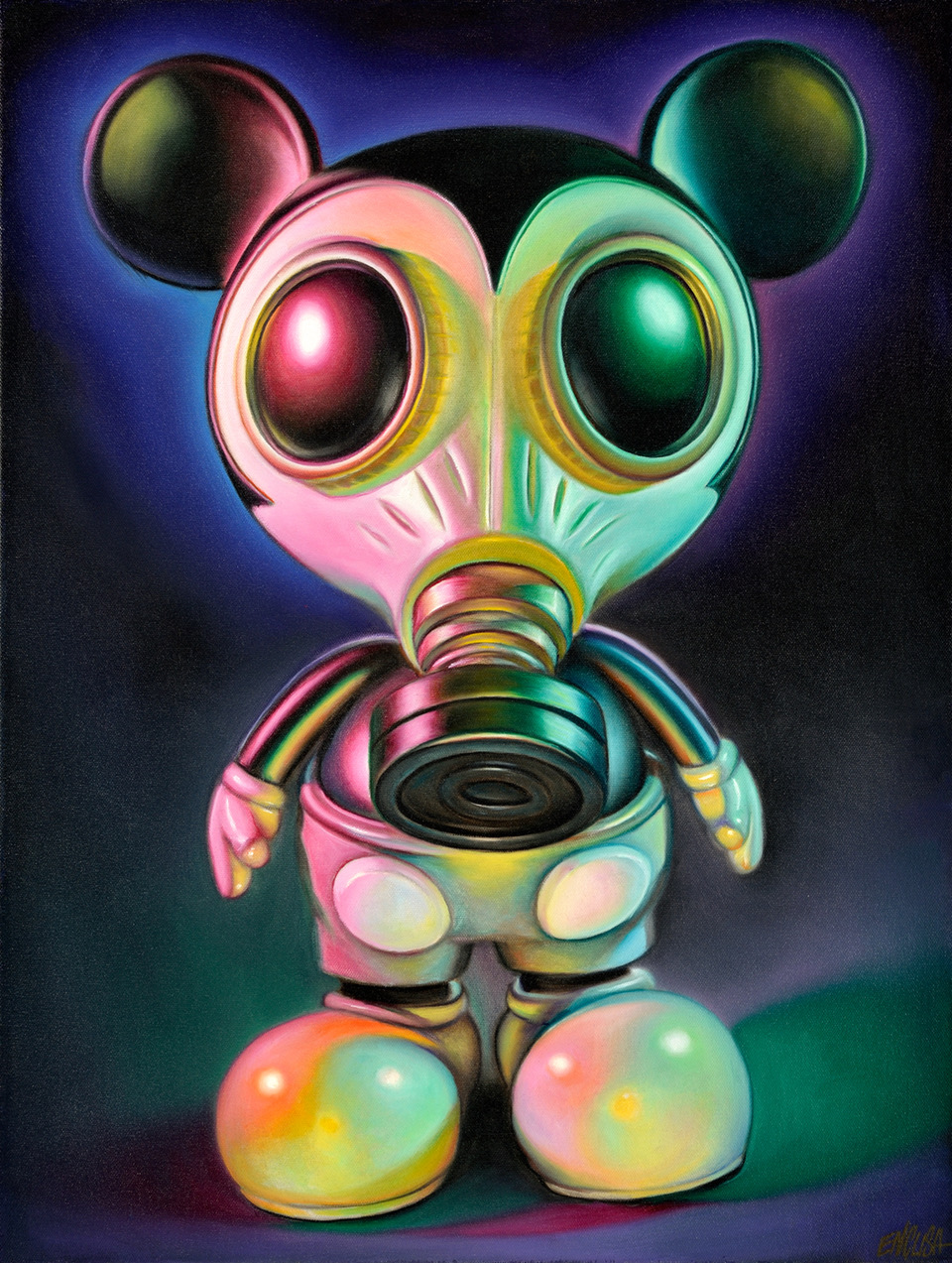 Politics and pop-culture always seeped into your paintings, but these days I wonder if you are thinking more literal or differently than past shows or eras?
When I have something deep and emotional to express sometimes I turn to music. Since the new administration has come to power I have created three rock operas. My “group” is called The Rabbbits. The three musicals all feature my characters expressing in song a new adventure in Delusionville. The first record was Delusionville, the second was Revolution and the third is Elephant. Said I would never let the perfect world of Delusionville ever have a direct correlation in the real world but, frankly, I am having difficulty telling the difference these days. The first two are on iTunes, Spotify etc. The third episode comes out this fall. As for the new paintings, same as always. I let the world pass through me and come out as art.

You were part of a really politically active street art community before there was even a term, movement or even conscious idea of what that meant. Do you at all feel like we are missing out on those days? Like politics and art are so geared to marketing that it seems hard to be completely politically active, and an artist now?
When I started doing street art, the things I was doing were illegal. It's hard to make a living doing something illegal that did not involve the exchange of money like drug dealing. Free for me to say, free for you to see. This paradigm meant I could say whatever I wanted because the ultimate counter to free speech, money, was not part of the equation. With politics, I think you always have to be changing your strategy. The same thing rarely works twice because there are two sides and the opposing side tames your strategies in short order. Once street art became a big part of culture, once it became a career, artists began to behave like anyone behaves at their job. I think it has been a largely positive development, a thing I dreamed of since my underprivileged youth. Art for the people. Still, no one is afraid of a house cat, but the lions of revolution may still be in their DNA. I have a really great idea for next year that would involve lots of artists. We will see. 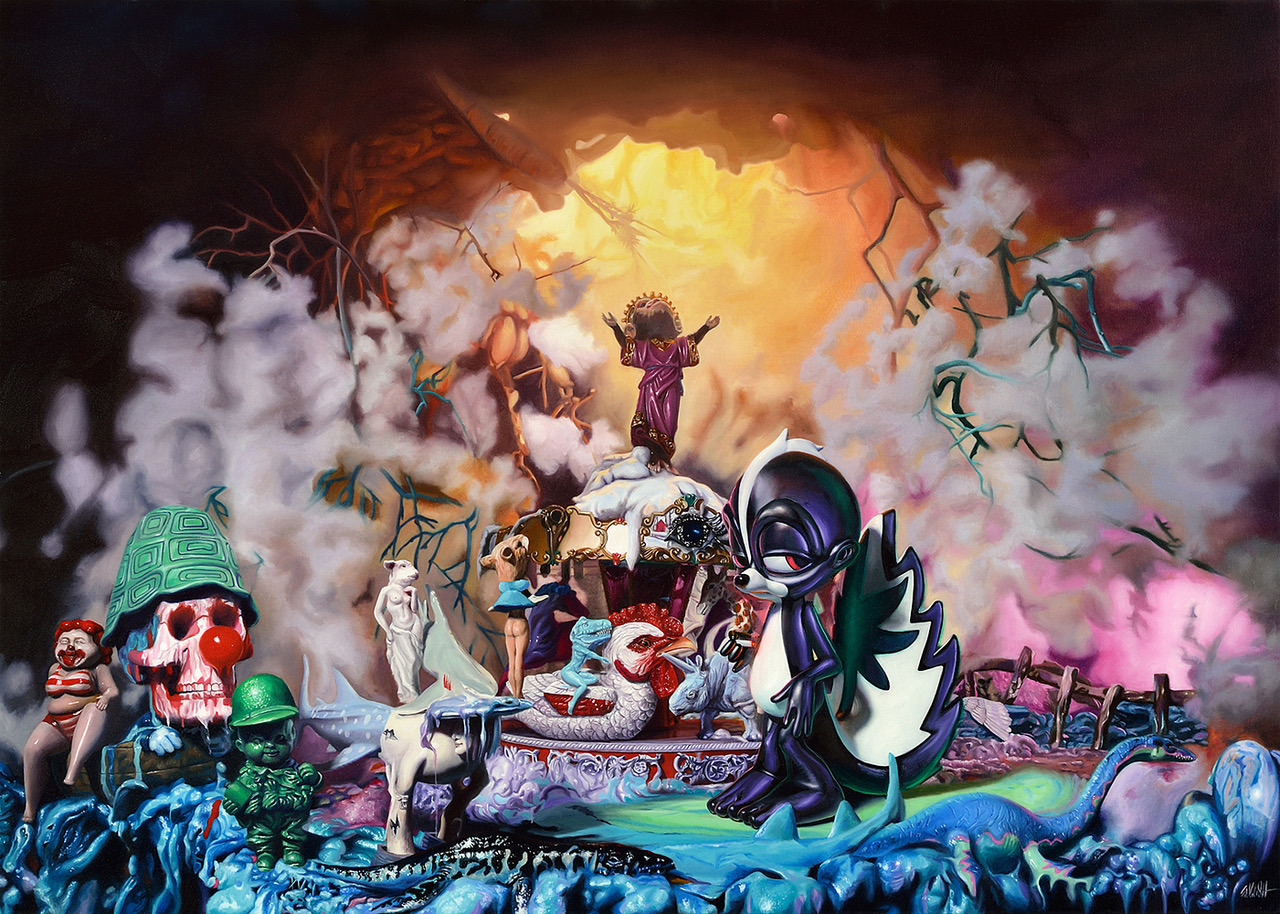 Can you talk about the name of your new show, Universal Grin? What's in the name?
The Montreal Show is Universal Grin. The grin treatment is akin to a political or corporate logo. If you want people to feel good about what your organization is doing you don’t need to engage in practices they will approve of, what you really need to do is front with a happy face. Maybe the Nazis would have been more successful if they used Snoopy rather than a reverse of the symbol of life. These shows are on some level about being so totally consumed by the cultural circus you can no longer be objective about it, just fall in love with its sublime perfection.

Do you ever have thoughts about, "Well, this show is in Canada, I may alter some of the work for that audience?"
In the past, the answer to that question would have been yes, but the zeitgeist no longer recognizes borders, so… no. 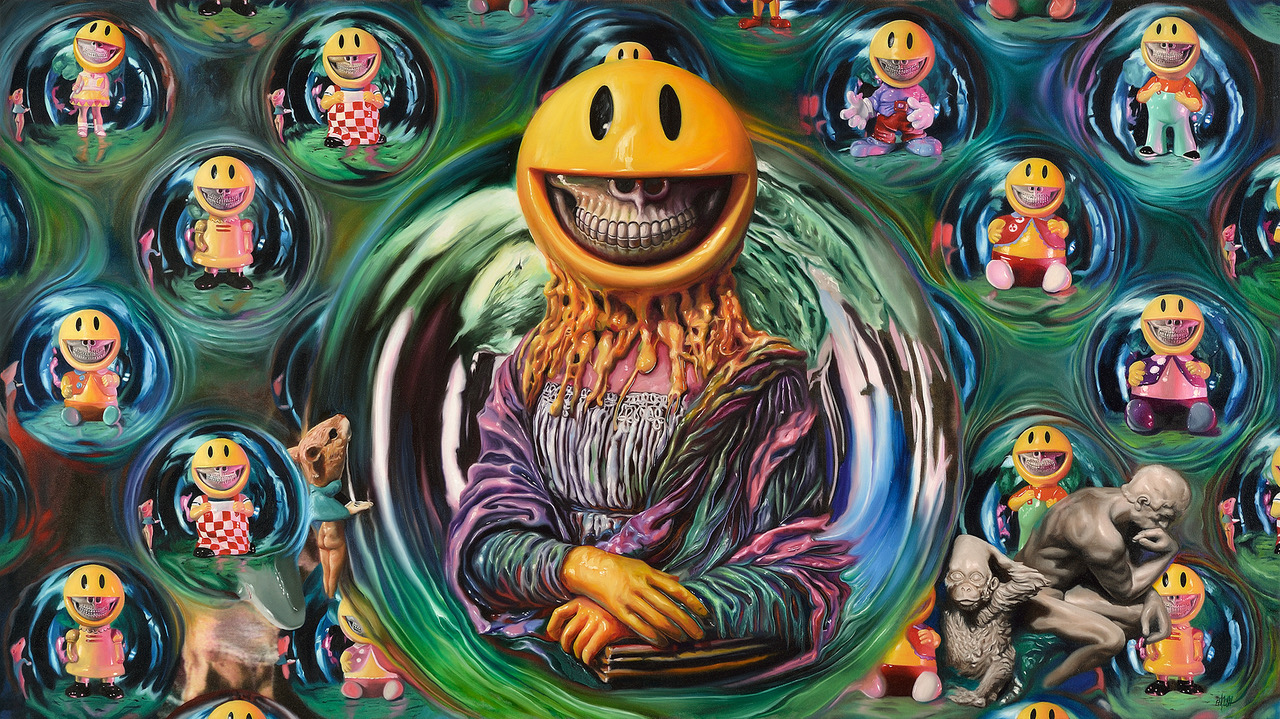 Because we always think of you as a forefather of so much art we cover with the magazine, what younger artists are you paying attention to these days?
I am super proud of the artists I have mentored. They are full-scale epic artists now with their own distinct visions. Beau Stanton, Genevive Zacconi, Bridge Stehli, Ian Strange, Evan Cohen, Laianna Ferruggia. Other artists? Kazuki Takamatsu, Nychos, Yoko d’Holbachie, Danny Liao, so many…

If you were to have 10 minutes alone with Mr. Trump, what would you ask him?
I have had that chance and I wasted it. I asked him if his hair was real. I thought he was the business man’s Andy Warhol. Has an opinion on everything. Had the single most important human insight. Command all attention. No one cares if you are lying or not, no one cares if you know what you are talking about, they care if you are loud, proud, self-assured and entertaining. Great hair works too. “In the future, everyone will be famous forever”