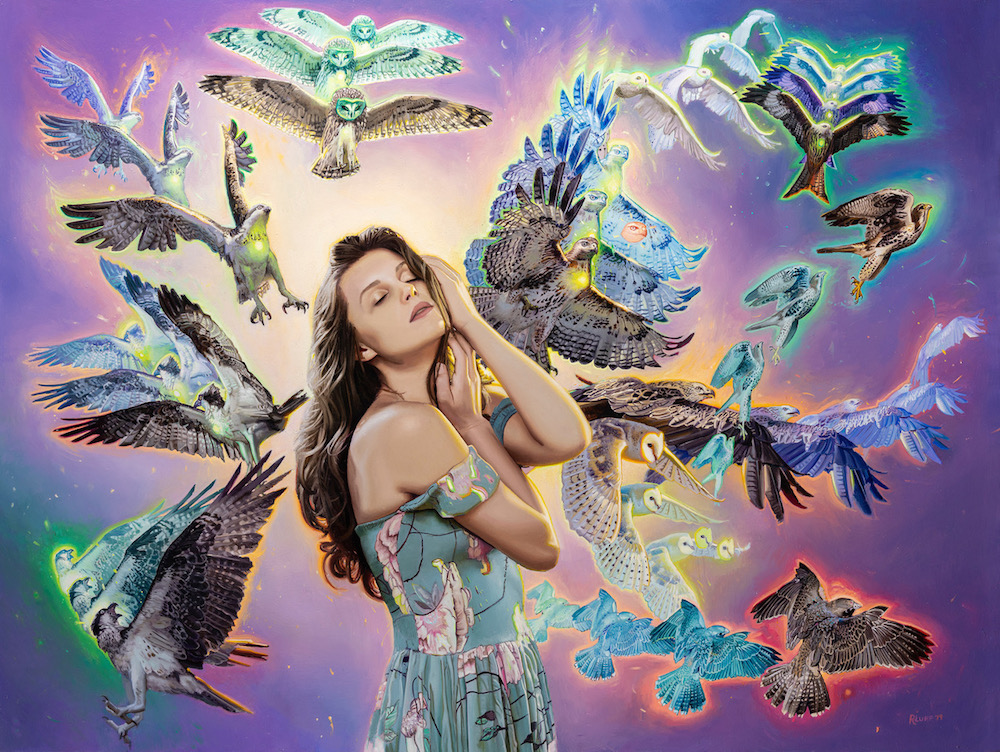 For his fifth exhibition with the gallery, Luff blends realism and fantasy to combine edges of the probable with the incandescence of a daydream, staging an ambiguous border between the spiritual and material. Tension between the manifest and the invisible haunts Luff's intensely-contrasted and vibrantly-hued imagery. Meanwhile, a state of perpetual atmospheric dusk hosts ghostly apparitions of both human and animals hemmed by the fiction of otherworldly light. With figures casting an acidic glow, Luff levitates their outlines in buoyant, fluorescent halos.

Luff's fluorescent fairytales feature dryadic women surrounded by woodland creatures, mystic owls, and sentient birds. Their powerful spirit and knowledge are conveyed through chiaroscuro intensity, as though the imagery emanates from an ultimate interior. The light feels immaterial and increasingly hallucinatory as each work bursts forth from beneath. Through dynamic compositions behaving within moments of action and revelation, the artist holds the viewer suspended in a trance of potential. With dreamy scenarios of suggestive harmony - the artist often likens his process to a musical composition in which he balances individual parts into a unified and cohesive whole - this "Narnian" world powerfully channels the stirrings of spiritual transcendence.

Everything from the anime master Miyazaki and the romance of the Pre-Raphaelites, to the otherworldly cast of the aurora borealis and Alphonse Mucha's ornate art nouveau stylization are synthesized into a unique whole that creates Luff's own aesthetic. He takes these inspirations and combines them into a romantic, modern universe with moments of dissonance, sorrow, melancholy, and transportive nostalgia.

After Glow opens on June 29th, with an opening reception from 6 to 9 pm, and will be on view through July 20th.